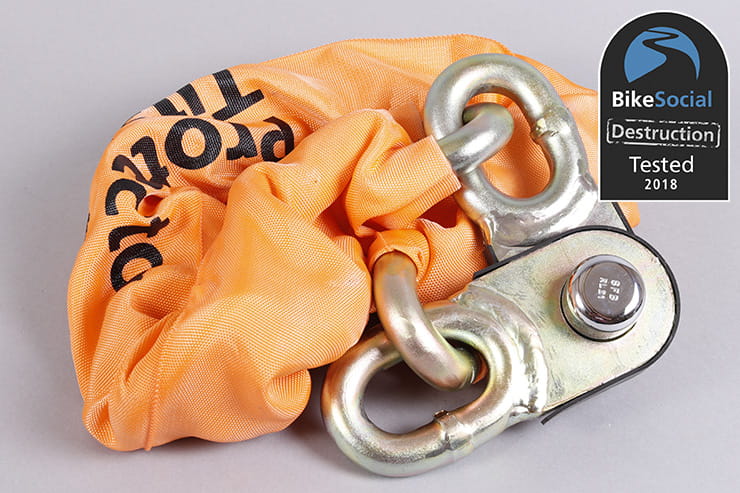 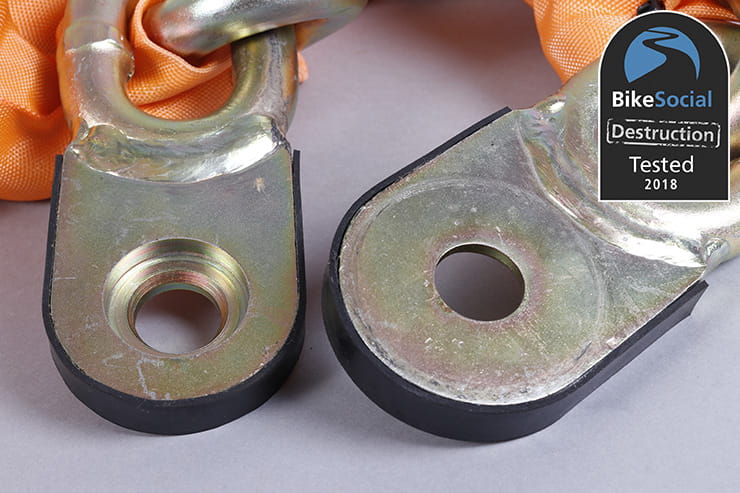 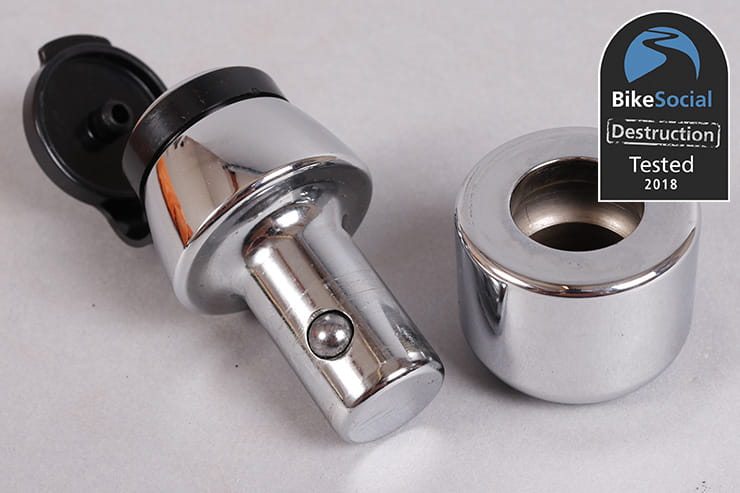 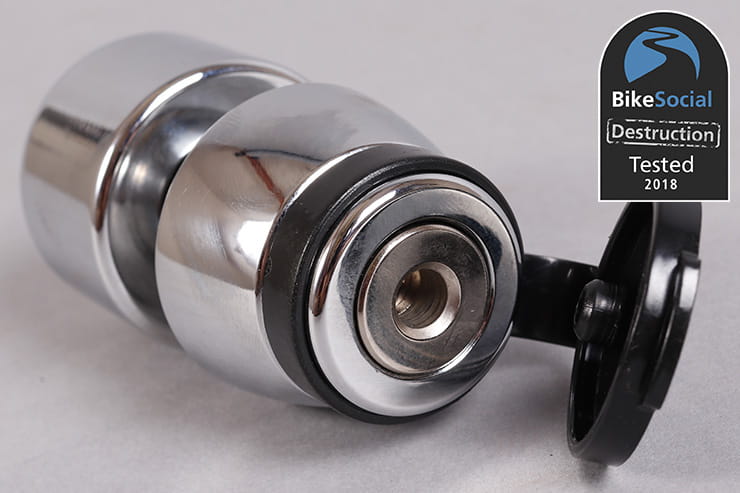 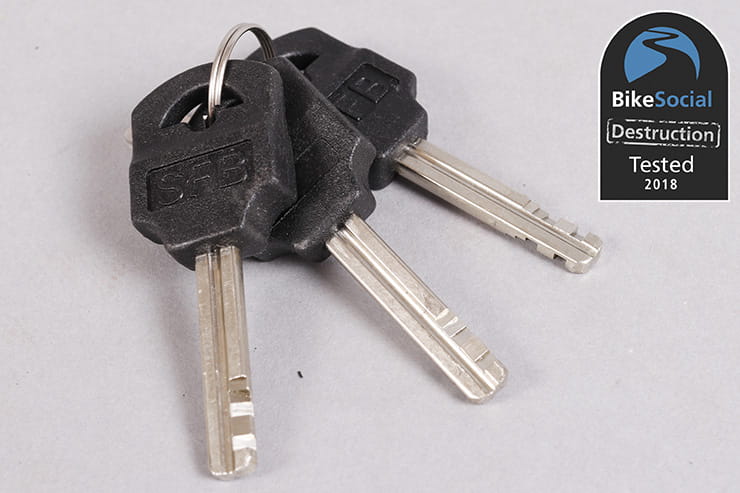 The new Pragmasis 22mm short-link chain is an extremely heavy-duty piece of kit designed predominantly for home use, with a tough sleeve zip-tied at either end to help protect your paint. The chain is rated to Sold Secure Motorcycle Diamond – the top level – and has a pair of extremely thick plates at either end that only accept Pragmasis’ ingenious RoundLock, supplied as part of the package.

The RoundLock simply slots together, providing a very difficult to attack form that doubles as a disc lock for even better value. It’s approved to Sold Secure Motorcycle Gold, and has proven itself in other tests of Pragmasis kit.

The lock comes with three keys, which can also be keyed alike to other RoundLocks, or the company’s D-locks for a small charge. 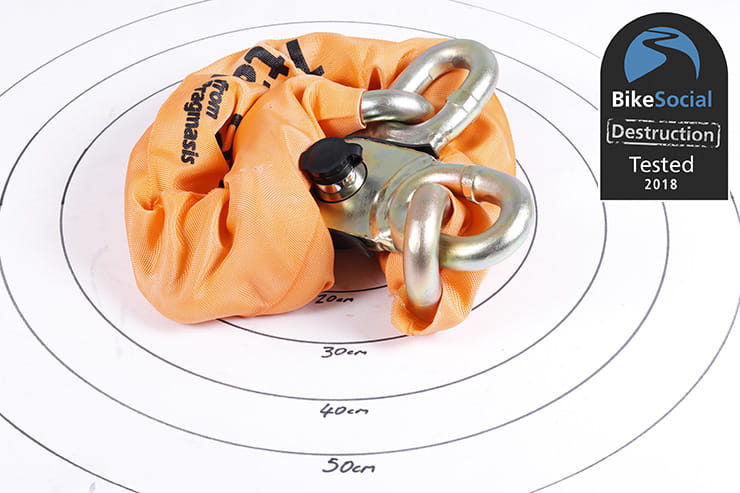 The chain is available in lengths from 1.0m to 3.0m in 0.5m increments, making the entire package cost between £199.95 and £419.95; just keep in mind that the 1.0m will be too short for use with most bikes and a ground anchor. Also know that you’ll need to ensure your anchor is large enough to accept this chain.

Rolled up, the 1.0m chain covers a diameter of around 28cm and weighs 14.06kg, meaning the 1.5m chain (our testing standard) weighs approximately 19.65kg. The RoundLock weighs just 530g, making it extremely easy to carry when you’re out with the bike.

As a short-link chain, the Pragmasis 22mm cannot be linked through itself to shorten it – this can be important to keep it off the ground and prevent a sledge hammer attack, but here it’s irrelevant; even with freeze spray we were unable to do anything more than dent the surface.

Unsurprisingly, bolt croppers are useless against the Pragmasis – it won’t even fit in the jaws of the largest 42mm tool.

Beyond an oxy-acetylene torch, an angle-grinder is the only real way to attack this chain; it took us a long time using a mains-powered angle-grinder with a 1.2mm cutting-disc. Using a battery-powered grinder is more time-consuming due to the lower speed, so while it’d still be possible to cut the chain, it’d be a very attention-grabbing, relatively slow process.

The RoundLock is held very tightly between the two plates, so there’s no space to get in and attack the large locking pin.

One area we identified as a possible weakness was the fact that the plates aren’t designed to roll all the way over each other where the two ends of the chains meet – by hammering them over one another it put a huge force on the lock as the two plates tried to pull apart. With repeated, noisy hammering on an anvil, we got the plates completely over and around. But still the lock wouldn’t let go. It did bend, and wouldn’t open again, but we could not break it this way.

Bolt croppers are useless on this lock, and an angle grinder attack is very time-consuming; even given the relatively long period needed to cut the chain, it’s still quicker than attempting to cut this disc lock off.

We also tried drilling the barrel out of this lock, but with no success – the drill bit simply snapped off inside. 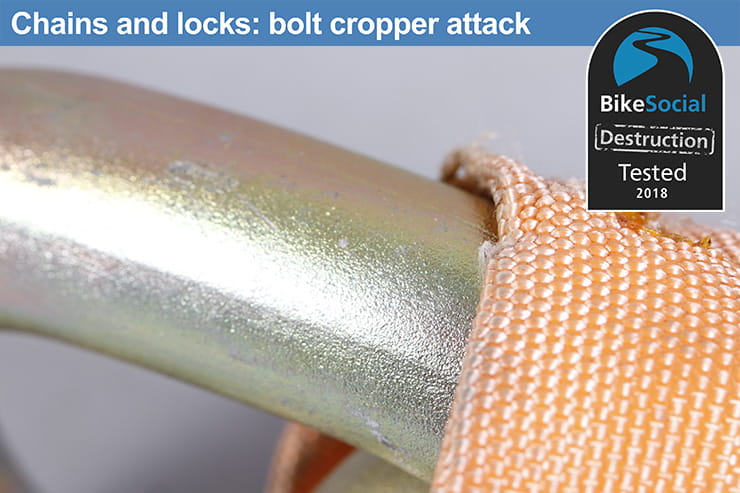 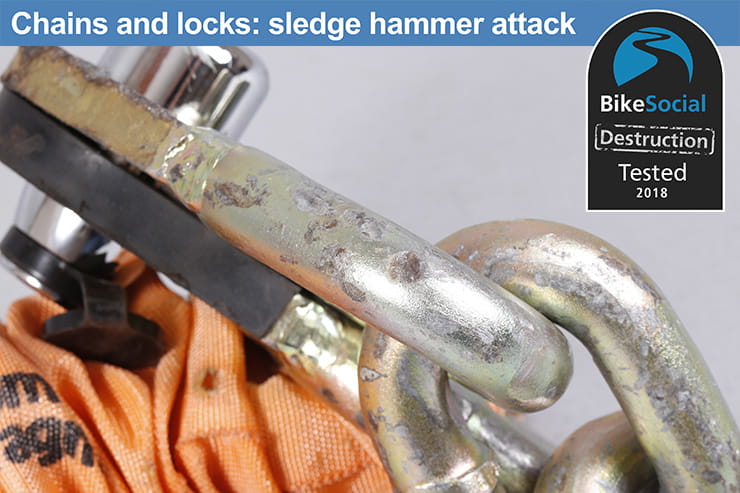 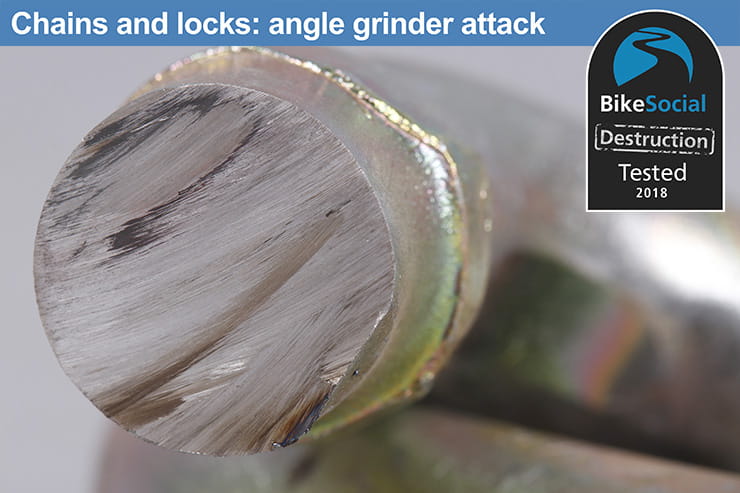 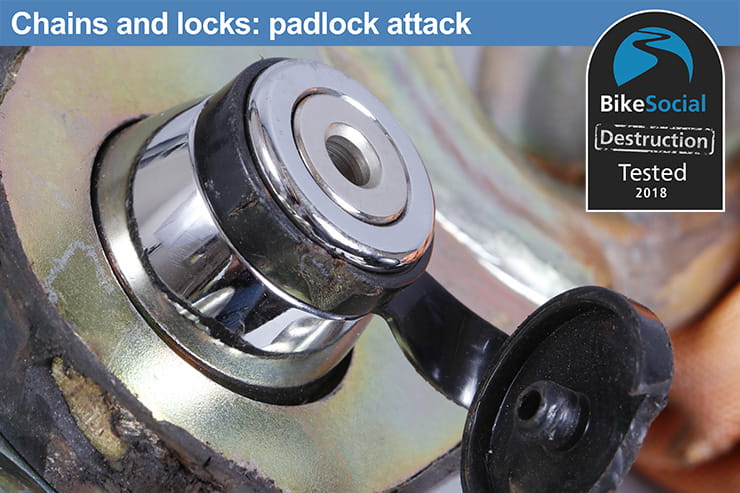 At the time of writing, this is one of the toughest chain and locks we’ve tested. The only combination that matches its level of security is Pragmasis’ own 22mm chain with a long end-link and Squire SS80 padlock.

While of course it can be cut – eventually – with an angle-grinder, the short links make attack more awkward than longer links. Of course, that makes it heavier, but this product is designed for use where the highest levels of security are vital.

The RoundLock is an incredibly simple yet very effective lock that helps keep the price of the overall package down, while increasing the value by also being an extremely effective disc lock.

If you want the very best protection you can buy for your bike, the Pragmasis 22mm comes very highly recommended.