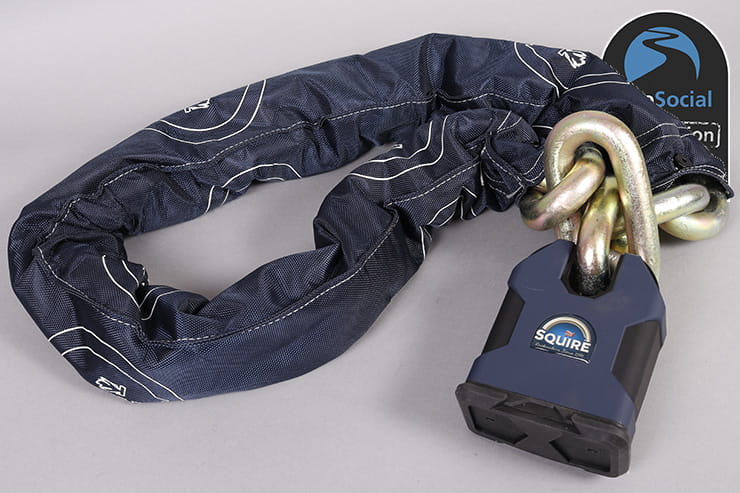 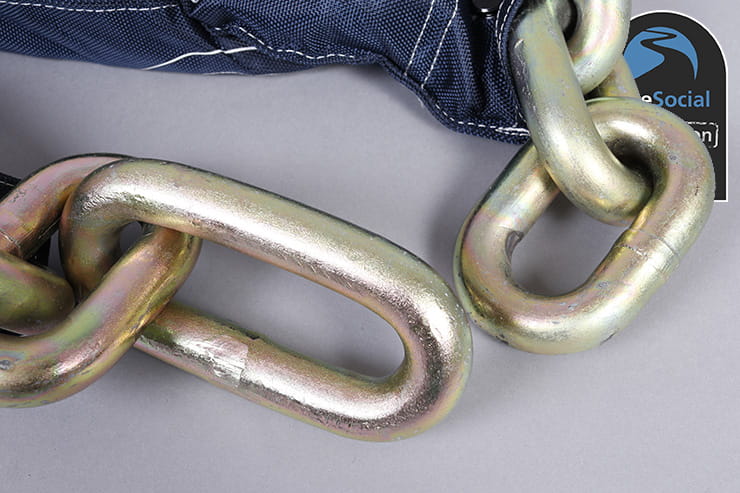 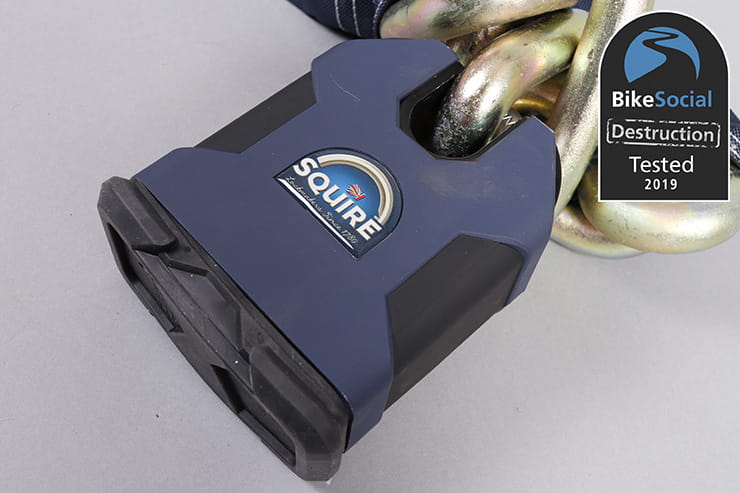 The Squire Behemoth is the biggest, heaviest and most expensive lock we’ve ever tested; combining a 22mm chain with the incredible SS100 CS lock, the package is rated to Sold Secure Diamond, while the padlock also boasts the Loss Prevention Certification Board (LPCB) SR4 level, which sees it attacked with a 12V cordless grinder, drills and hammers for ten minutes (you can see the full test certification criteria here).

The padlock is also rated to CEN Grade 6 – which is the highest security rating – thanks to its massive body and the fact that it has two keyways. These can be keyed alike or differing, but having to use two keys means picking would be much harder. A total of four keys are supplied with the lock.

The only weak point of this lock is the rubber dust cover on the bottom, which is easily damaged leaving the key holes open to the elements. The plastic-covered body offers some protection to your bike’s paintwork, but the lock alone weighs an incredible 4.34kg – just under twice the weight of the SS80CS that’s commonly used on some of the toughest motorcycle chains.

The chain is covered with a rugged sleeve that’s bolted at either end; this is an imposing package. 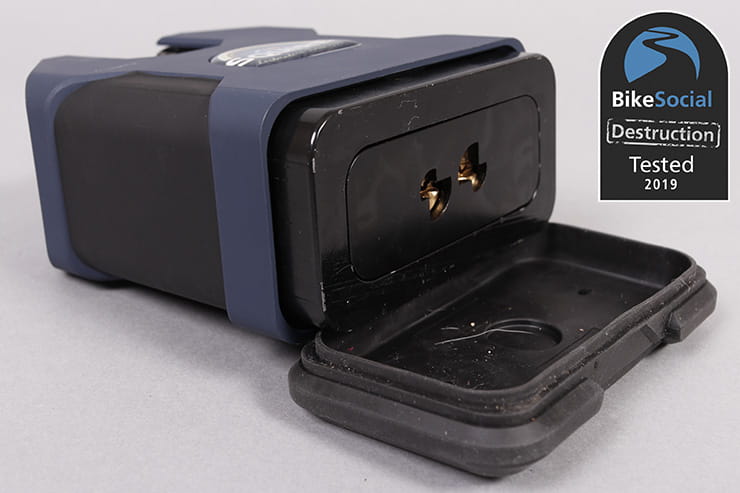 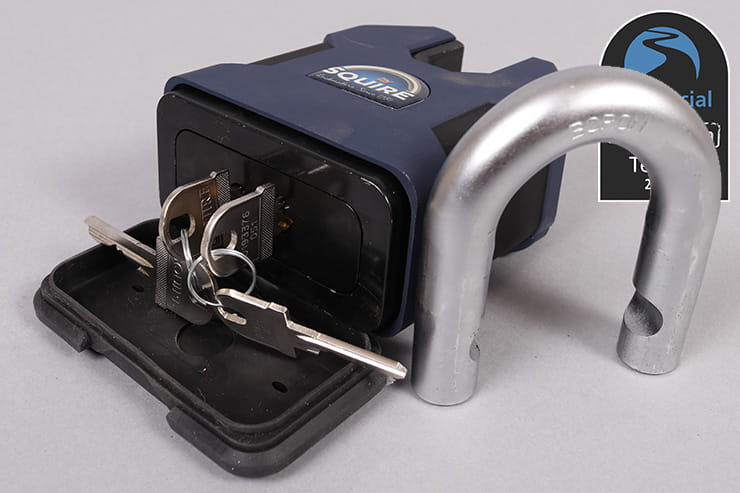 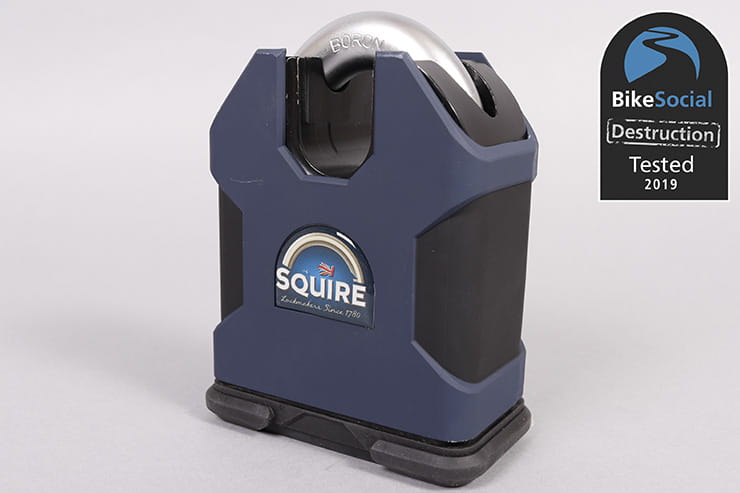 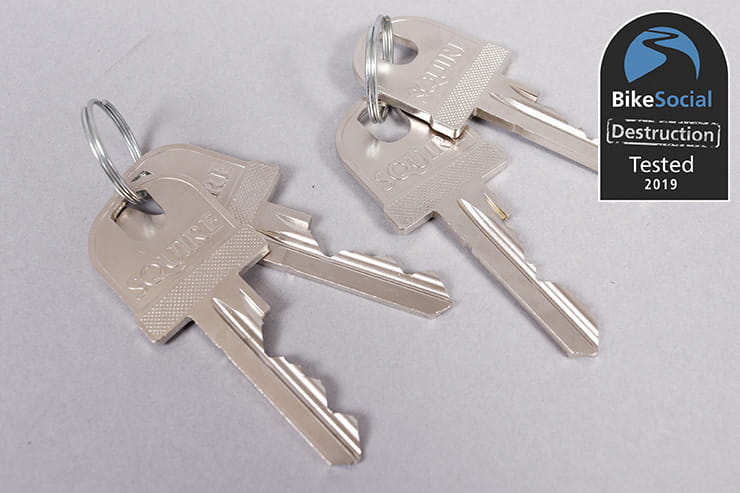 Weighing a total of 21.62kg, it’s unlikely anybody is going to carry this chain and lock with them day-to-day; like other 22mm chains, it’s intended for home use, or perhaps at work. Note that if you leave your lock accessible outside, always check it before use; thieves have been known to remove the sleeve when the lock’s not in use, cut a link out then replace it with zip-ties, before covering it up again. Doing this means they can just snip the ties and take the bike away.

Also, if your lock has been glued up, don’t leave the bike as the chances are the thieves are waiting for you to be forced to leave your motorcycle unsecured.

The sheer bulk of the chain makes it difficult to handle, and you need to make sure your wheel is close to what you’re chaining to. If you’re using a ground anchor, check that it’s big enough to accept a 22mm chain; few are.

When coiled up, the chain covers a 32cm diameter. 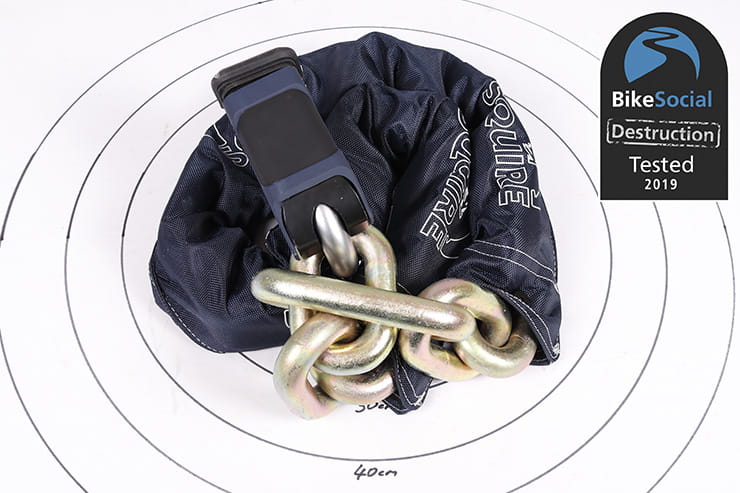 There’s absolutely no way this chain can be cut with a near-silent bolt-cropped attack, even with our 42” tool.

A sledge-hammer will break this chain, two good solid hits in our testing causing it to shatter. This is a sign that the links have been through-hardened, with no ductility in the core. While it’s a disappointing result, it’s very important to note that we give ourselves plenty of space and use a section of railway track as an anvil. A sledge-hammer attack is very unlikely in a typical theft scenario and can be defeated simply by keeping the chain off the ground.

Being so thick, an angle grinder attack takes a significant amount of time; using our benchmark mains-powered grinder (for consistency) and 1.2mm cutting discs, the Behemoth is very hard work to cut, though it was slightly quicker to defeat than some other 22mm chains – a surprise given its hardness.

How to destroy the Squire SS100

Forget trying to break this padlock – if it takes 120 rounds of ammunition, 40 of which are armour-piercing then a final 20 rounds of 50 calibre to beat it, attacking what the padlock’s attached to will always be easier. Picking will be a lot harder, and while celebrity locksmiths will defeat it in ideal conditions, in the wild this would be very, very hard to beat.

But picking is pretty much non-existent in motorcycle theft, unless it’s a ridiculously easy lock, so what matters is how tough it is. 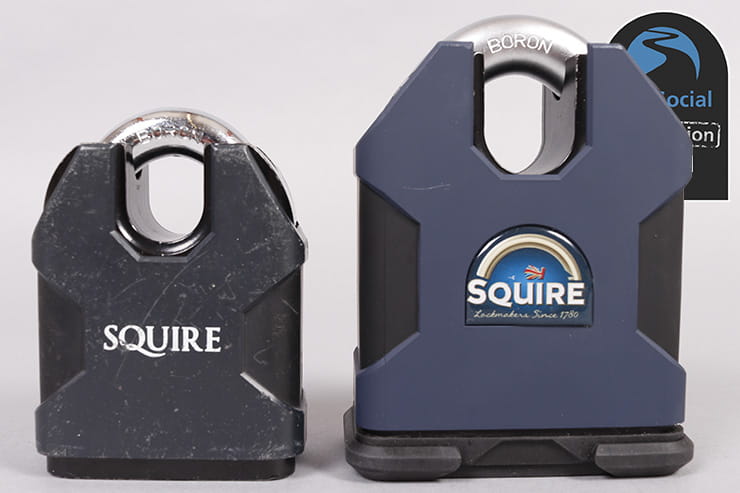 The LPCB rating of SR4 promises that it’ll stand up to a ten minute angle-grinder attack, but that’s with a 12V battery tool; this is an old device, with 18V the norm and even a 54V DeWalt now available, so our mains-powered grinder is a fair comparison, and proved the padlock can be cut in a lot less than ten minutes. But it will still take longer than the chain.

A sledge-hammer attack had no effect beyond a few surface dents. 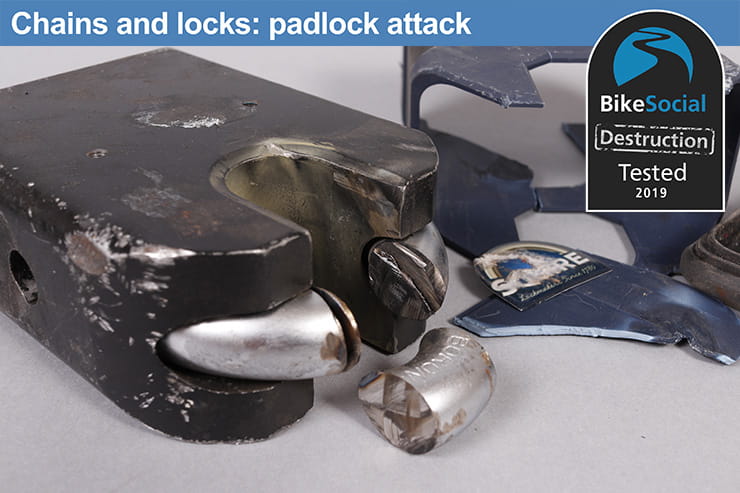 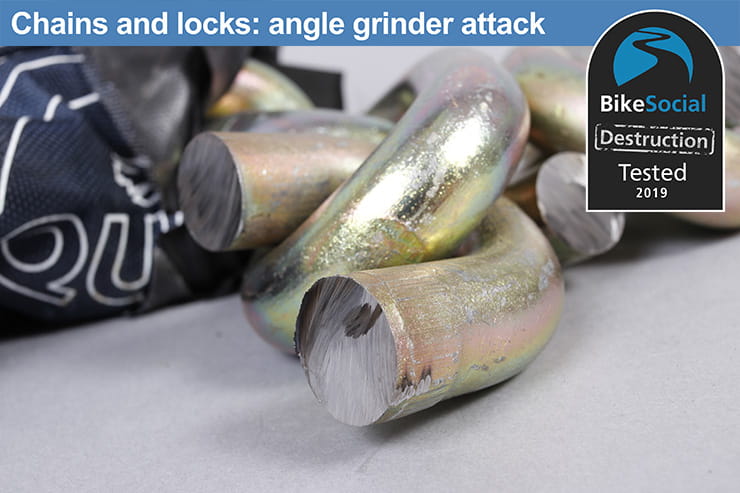 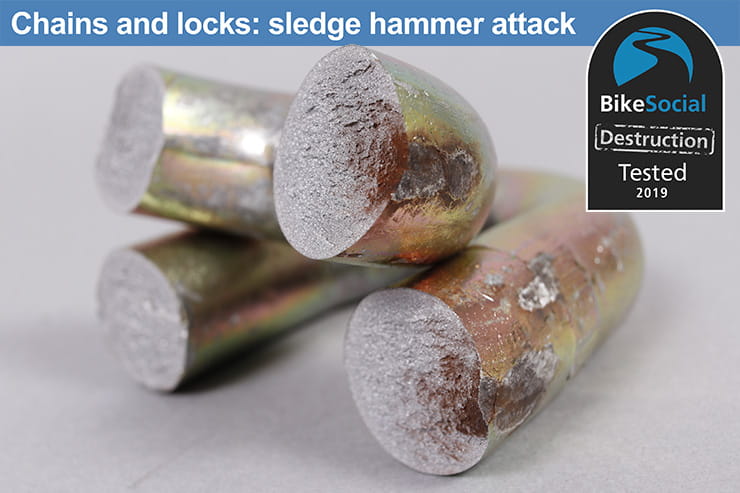 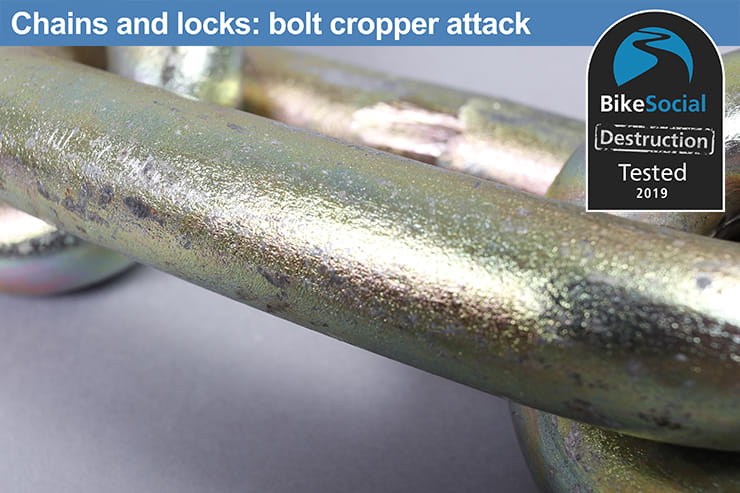 The attack results show that the chain isn’t the toughest 22mm we’ve reviewed. Failing the sledge-hammer test at this size is a real shame, but do remember that this form of attack is extremely unlikely; if a thief is going to go to the effort of taking tools – which isn’t as common as social media would have you believe – they’re more likely to take an angle-grinder. To see how using a chain can make a bike less likely to be stolen than the average car, click here.

This isn’t the most difficult of the 22mm chains to cut with an angle grinder, but the difference in performance becomes almost irrelevant when the times get this long, and the padlock is incredible – it’s absolutely massive and only the most elite of lock pickers would even consider trying to open it. Even then, they wouldn’t have much success laying on their back in the road trying to do it.

But being the toughest lock in the world has its disadvantages too – besides being difficult to handle, the two keys are quite a fiddle to use. If you’re securing a machine that’s not used very much then it gives real peace of mind, but for a daily rider, faffing with two keys could soon become irritating; Squire’s own SS80CS is still an awesome lock, but it only needs one key.

Ultimately, this is an incredibly intimidating package that’ll last a lifetime – seeing this wrapped around a bike will discourage most criminals; if you want a lock that screams ‘don’t even bother thinking about it’, the Behemoth is an impressive option.