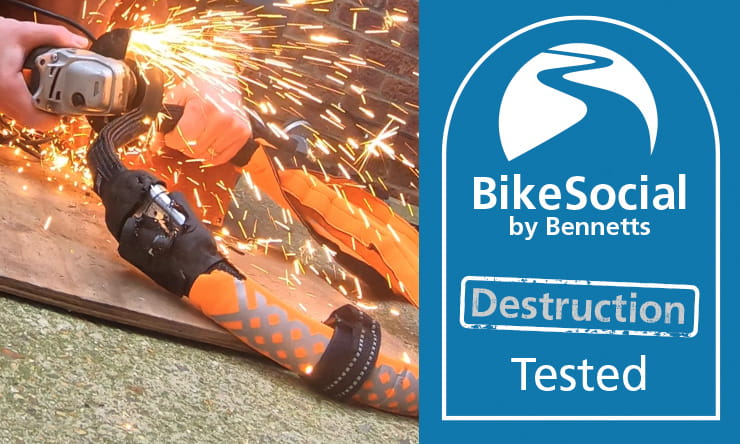 The LiteLok Core Moto replaces the original Litelok Gold with a tougher design that’s claimed to be up to 50% of the weight of motorcycle chains, and ‘the best motorbike lock for when you’re on the go’.

While the original design was vulnerable to a heavy-duty cable-cutter attack, this isn’t the most common tool in a UK thief’s arsenal; a portable angle grinder is more likely to be used.  While the new Litelok Core Moto addresses the cable cutter issue, its certification to Sold Secure Motorcycle Gold doesn’t answer the question of whether it’s more resistant to an angle-grinder attack, as only Motorcycle Diamond-rated products are subjected to this level of testing. A lack of understanding of the standards among some riders – compounded by sponsored influencer videos – can make the buying choice confusing. 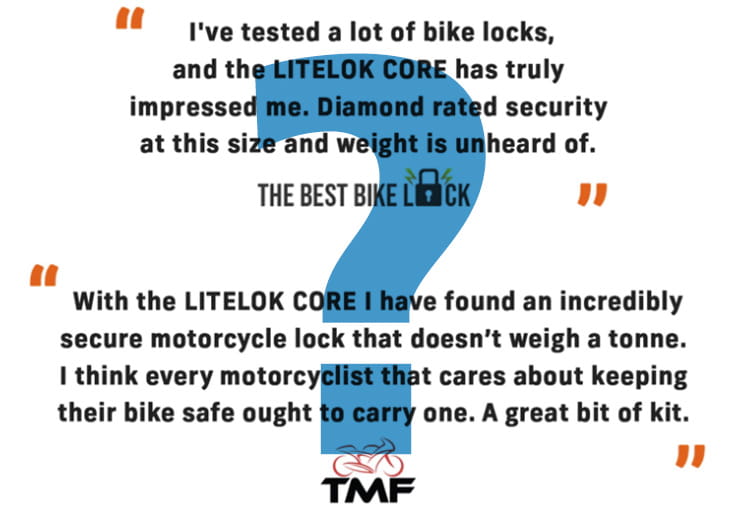 Quotes used in the Kickstarter campaign (which raised £210,568 from 1,516 backers) might have caused some confusion among potential buyers; the Litelok Core is BICYCLE Diamond-approved, which does not include an angle-grinder test. At the time of writing (the first chance I had to get a lock), ‘The Best Bike Lock’ still only had a preview of the Core Moto on its site, not a full review. The Missenden Flyer was sponsored by Litelok, and didn’t carry out any destructive testing during his video.

The Core Moto is secured with a 9.5mm pin that’s concealed in the body when snapped shut – a process that doesn’t require the keys to be inserted (three of which are supplied). With a removable, washable neoprene sleeve and a rubber-covered body, your bike’s paintwork is well protected, while the locking pin comes with a rubber cover that snaps in place to avoid damaging anything it might hit.

The Core Moto could be passed around the waist or slung over the shoulder, but shouldn’t be as it could cause injury during a crash; it’s designed to roll up and be tucked in luggage or strapped to the rear seat. 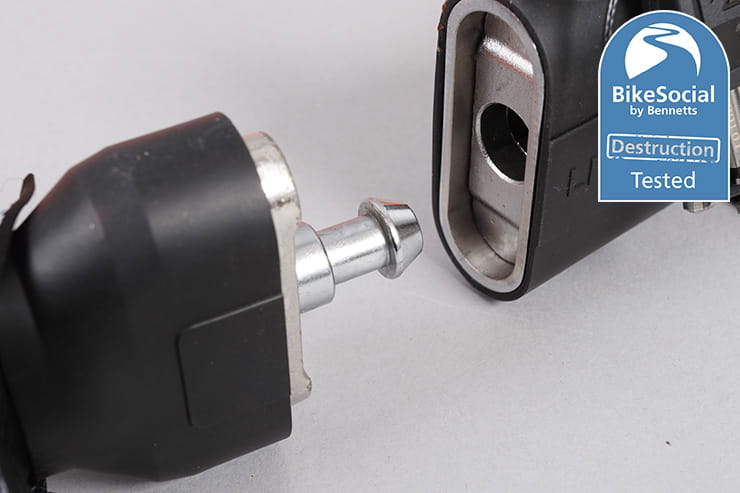 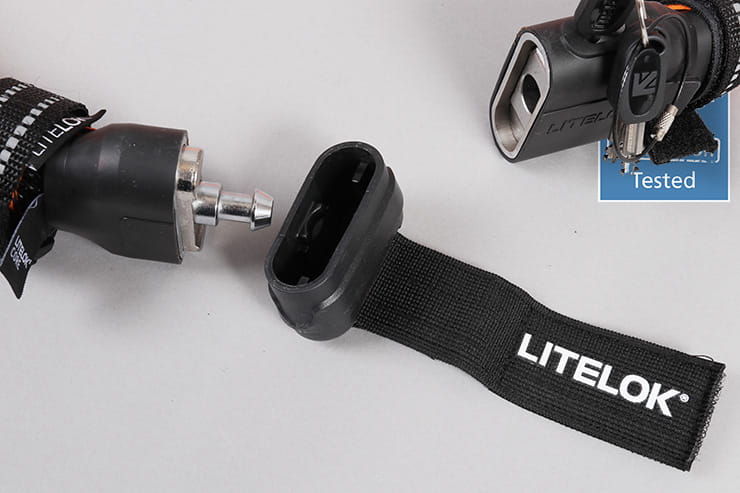 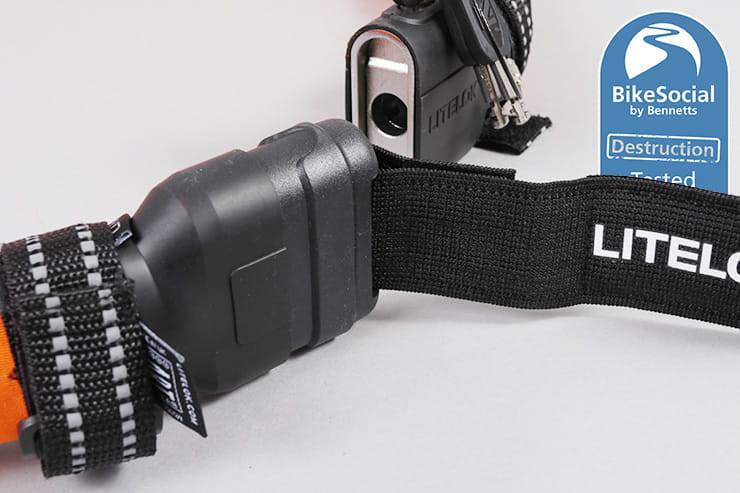 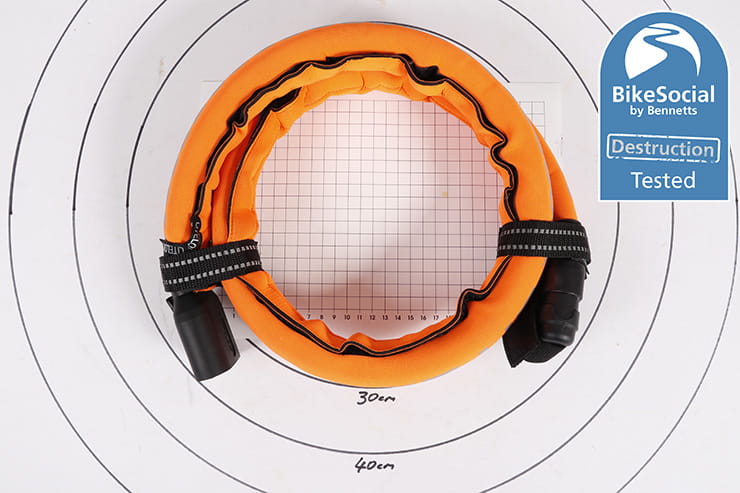 The Litelok’s USP has always been its weight, and at 3.12kg it’s among the lightest security I’ve tested, but the construction of 17 wire bundles forming an 18mm diameter core, surrounded by a 2mm-thick, 20mm diameter tubular steel skeleton and a soft plastic outer shell (wrapped in a nylon braid and neoprene outer) makes for a lock that will only coil to around a 35cm diameter.

It takes up a fair bit of space, meaning it can be easier to carry a lightweight chain; the Milenco 9mm Chainlock, for instance, might not offer the resistance to large bolt-croppers, and be fractionally easier to cut with a grinder, but for short trips out it’s a lot more portable. 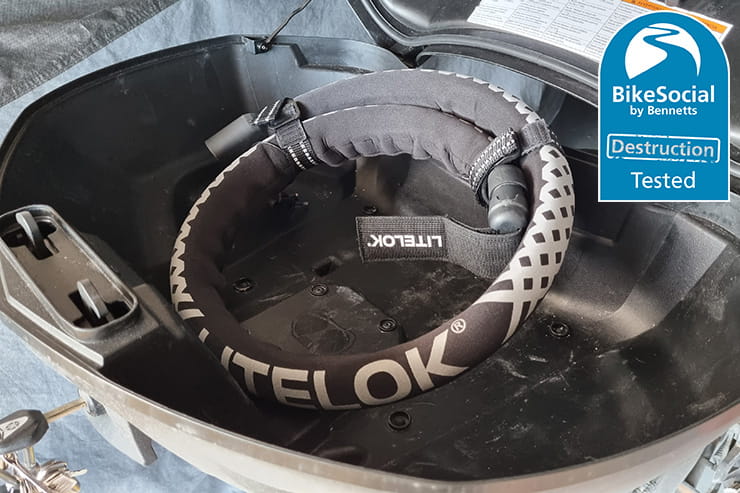 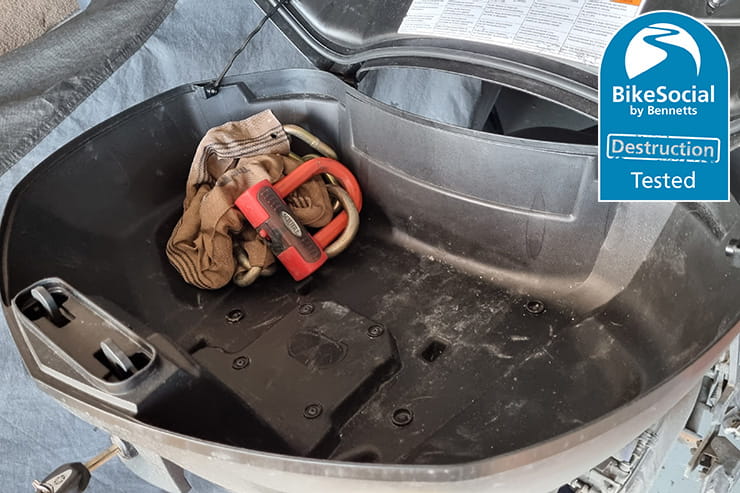 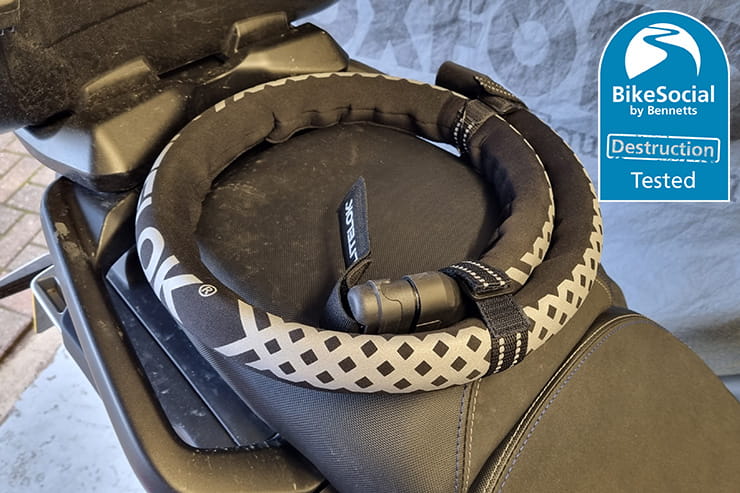 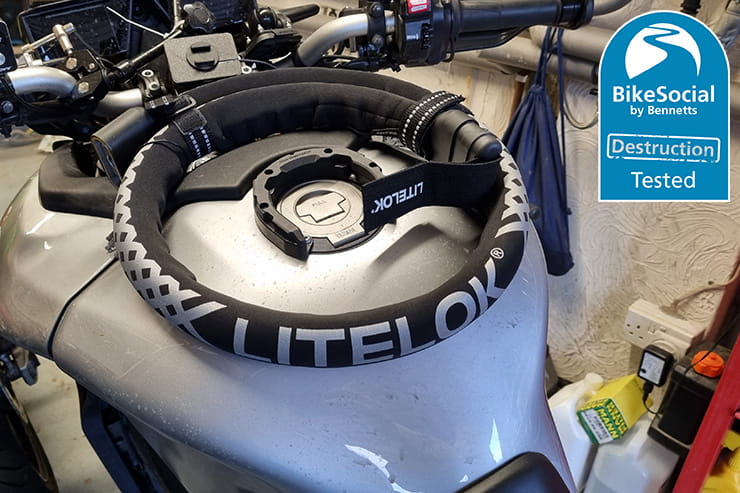 If you have space to stow the Litelok Core Moto, it does offer a useful level of security, but keep in mind that the 1.2m version only just tucks into a 52 litre top-box (compare it to an 11mm chain), and doesn’t really fit the rear seat of the Yamaha Tracer 9 GT. Litelok claims it can be carried in a tank bag, but as you can see from these pics, it’d have to be a big one. 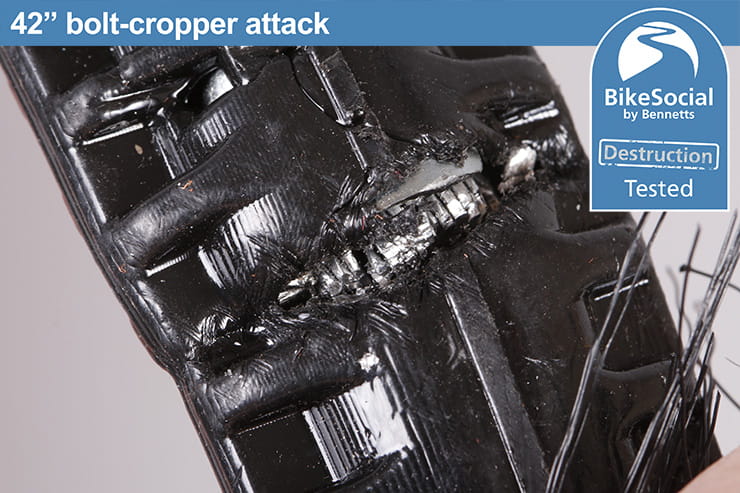 Litelok was keen to highlight the original model’s resistance to a bolt-cropper attack; being a cable-based design this was no surprise as croppers just squash the strands, rather than shearing them, but click-hungry social-media channels were quick to highlight a potential weakness in the original Litelok in that specialist, heavy duty cable cutters could bite their way through it quietly. The equipment needed for this isn’t commonly a feature of UK thefts, but it was still a potential vulnerability and I do use these tools in my attack testing.

The new Litelok Core Moto can’t be defeated with cable cutters due to its steel outer shell. This can be cut quite easily with bolt croppers, but then the dense cable inside defeats even the 42” tool. An implausibly well-equipped thief might then turn to cable cutters, but the sheer size of the cable bundle inside still makes this an impractical attack method.

I’ve attempted twisting and crushing attacks to put high levels of force on the lock mechanism and the join between the cable and lock body, but all with no success. 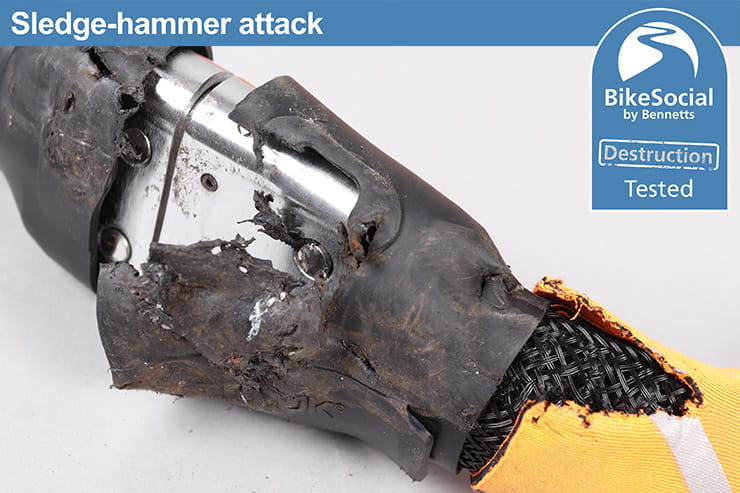 A sledge-hammer attack – even with a section of railway track as an anvil – proved fruitless, though the lock body deformed to the point that it would no longer operate. This is a very unlikely form of attack, but it’s something that some chains can be vulnerable to under the worst conditions. 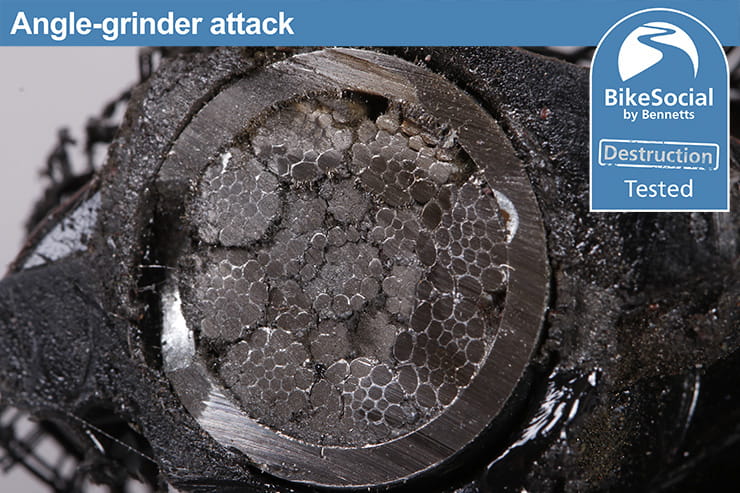 An angle-grinder is the only real way the typical thief will cut the Litelok Core Moto, and while it resists a cheap battery grinder for a fair while, a high-torque quality grinder – or my bench-mark mains grinder – chews through it only fractionally slower than the original Litelok.

Lock picking is irrelevant on the street unless there’s a fundamental flaw (which is part of Sold Secure testing). I have extended an invitation to the Lock Picking Lawyer to talk about real-world theft, and will be more than happy to pay his expenses to work together on getting a better understanding out to all riders, should he ever find himself in the UK. As entertaining as locksport is, it’s important to me that people understand the real limitations of any product; theft data from 200,000 Bennetts insurance customers shows that even the most basic locks reduce the chances of your bike being stolen by a factor of three, while heavy duty security can make it less likely to be stolen than a car. 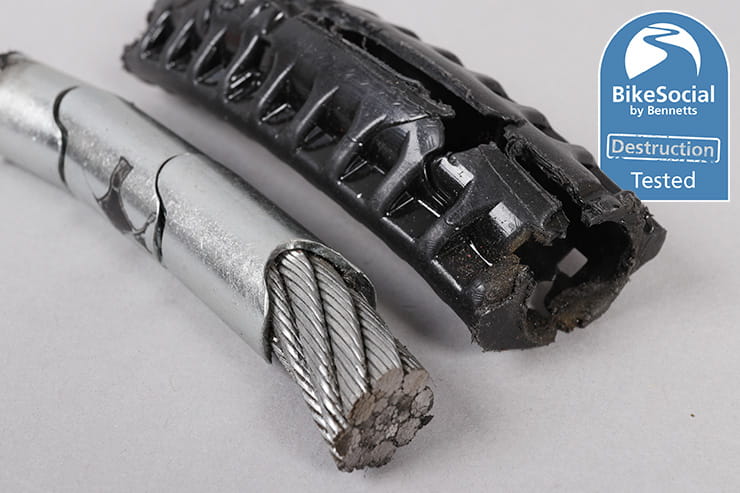 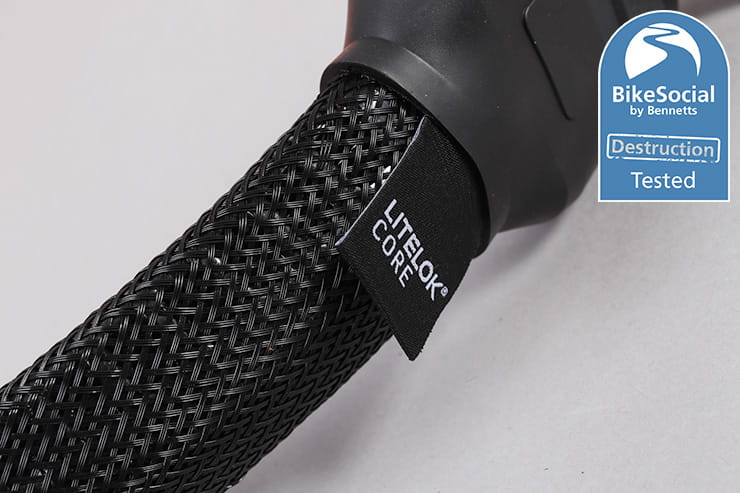 Below the removable neoprene cover and nylon braid, the Core Moto has a 2mm-thick tubular-steel skeleton over a cable bundle that’s encased in a soft outer skin. It does look quite a costly construction method. 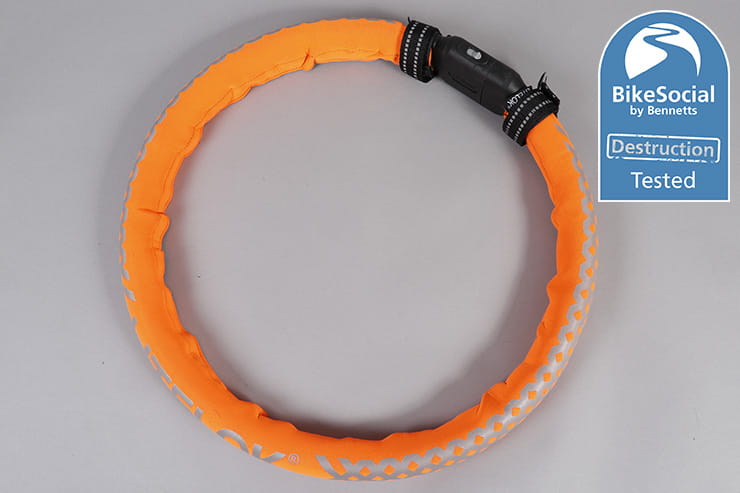 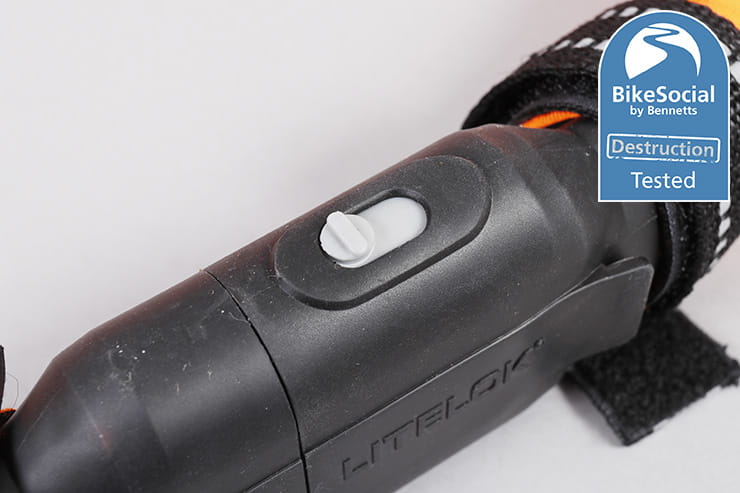 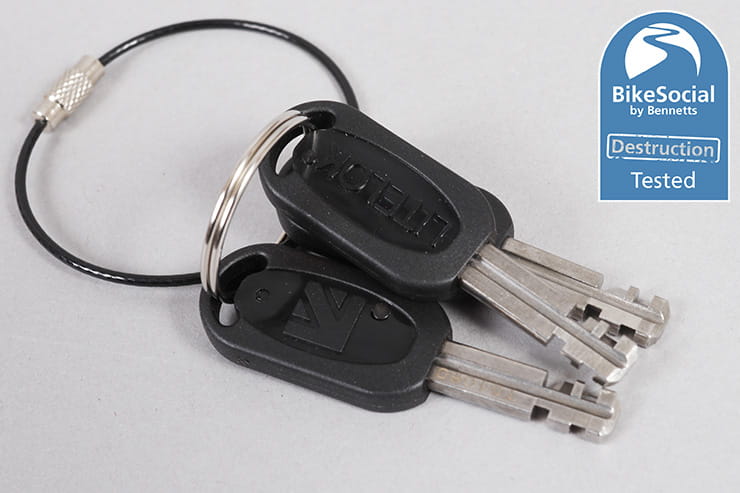 It can rightly be argued that if a thief goes equipped with an angle-grinder, they’ll get through most portable security; it’s just a matter of how many more seconds it takes them. The Litelok Core Moto offers slightly better resistance to this most common of serious attacks than the original Litelok, but it’s less portable.

A 9mm chain will be fractionally faster to cut with an angle grinder, and be defeated with large bolt-croppers, but move up to a good quality 11mm chain and it’ll take far more effort with a massive 42” set of croppers to get through, yet it’ll still be easier to store and a little more versatile. A 1.2m Pragmasis 11mm chain with a noose-end weighs 2.99kg. Add 0.67kg for the Squire Eiger Mini (which doubles as a disc-lock) and you have what might be an easier to carry solution that weighs just 540g more and has a better resistance to angle-grinder attack. Fairer still would be to compare it to the 1.5m Litelok as the noose end of this chain makes it reach further; then they’re pretty much the same weight.

Again though, if the thief is going to go at it with a grinder, the Litelok Core Moto does hold up, and it completely defeats other forms of attack, however unlikely they might be. The 1.4m 12mm Milenco chain-lock will roll up more compactly, and defeated the hammer and cropper tests – and is more resistant to an angle-grinder attack – but it’s 1.5kg more heavy; when packing for a trip this could be significant. And of course, the Litelok might be quite large when rolled up, but that leaves a hole in the middle to stash other things.

Ultimately, there’s no denying that the Litelok Core Moto offers good levels of protection for a portable device, but you must be aware that it’s at the bottom-end of the scale when it comes to angle-grinder attack, and it’s not as easy to store as you might imagine.

You can join two together if you want, and it allows you to secure your bike to an anchor, lamp-post or fence. The 1.2m version will see your machine having to be parked pretty close, so the 1.5m might be the better option, but then the size and weight goes up, which could be more of a storage issue.

It’s an interesting solution, and for those looking for the lightest possible security, and who have the space, it’s certainly worth considering.

To see the other chains and locks tested by Bennetts BikeSocial, click here and be sure to regularly check for the discounts available through BikeSocial membership.