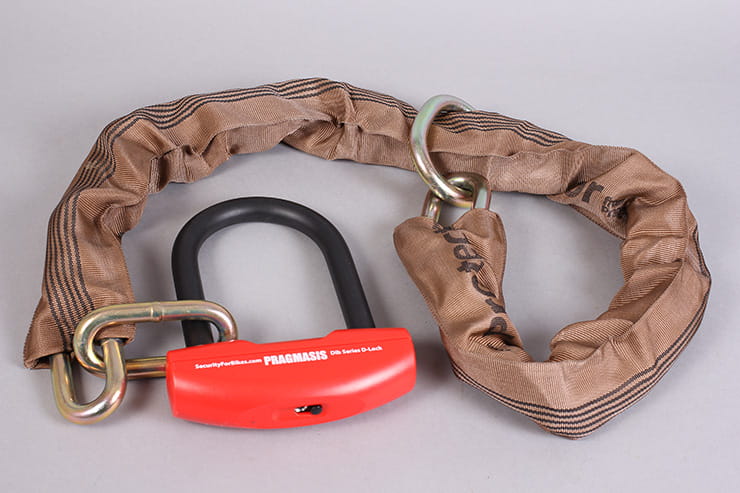 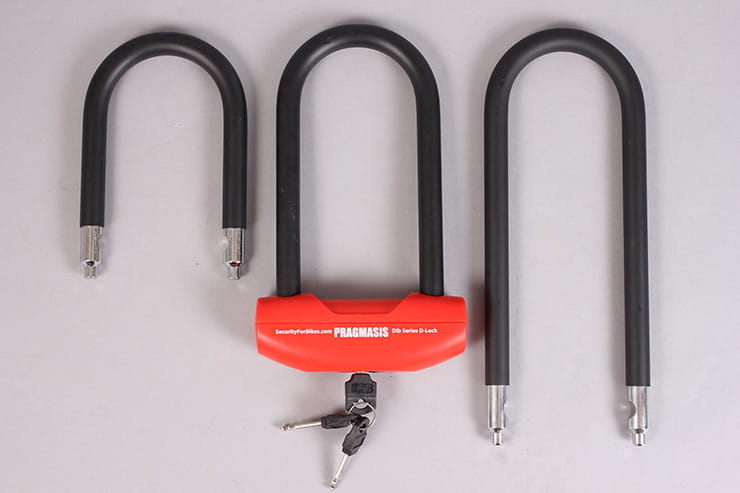 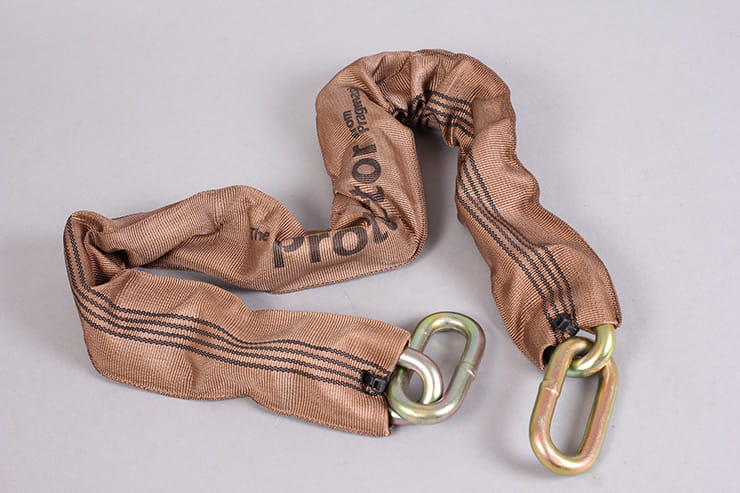 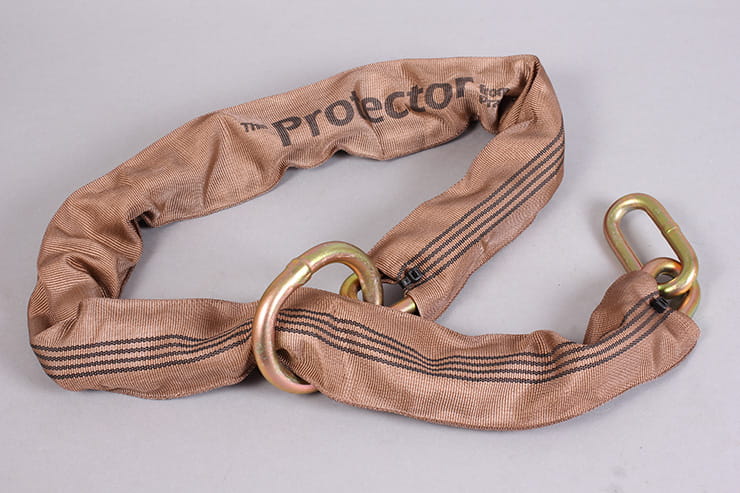 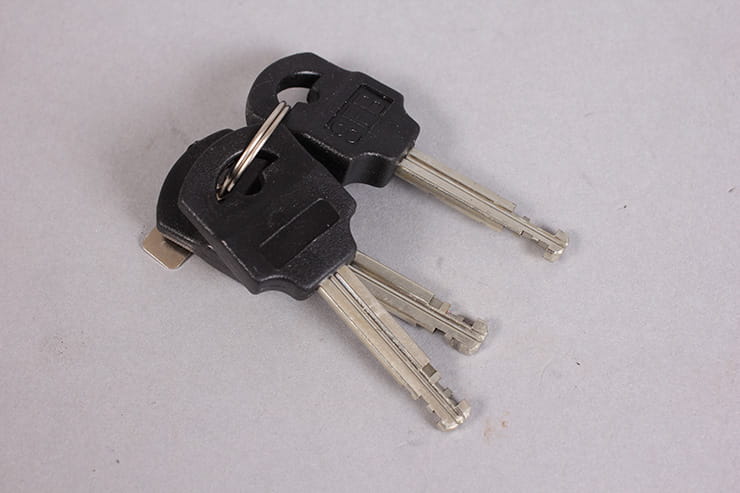 Available individually, the Pragmasis DIB-Series U-locks (or D-Locks as they’re also known) and 11-13mm chains offer a versatile range of security options for your motorcycle, moped or scooter.

The U-lock is approved to Sold Secure Motorcycle Gold (higher than Bicycle Gold) and the police Secured by Design specifications, comes with three keys (which can also be supplied keyed-alike to other Pragmasis products), has a sliding keyway dust cover and a plastic-covered body with soft-sleeved shackle to protect your paintwork. The shackle is a very solid 16.5mm in diameter, and while the lock can be bought in three internal shackle lengths of 130mm, 190mm and 260mm for £44.95, £47.95 and £49.95 respectively, it’s also possible to buy the shackles alone from £14.95.

We’ve also tested the 1.2m 11mm noose chain, at £59.55. With a £20 premium, and only available on chains of 1.2m and longer, a noose offers excellent versatility, as the small end can be fed through the larger loop, making for much more reach when securing to solid objects.

Finally, we’ve tested the 1.2m 13mm noose chain, which, besides being police approved, carries Sold Secure Motorcycle Silver along with Bicycle Gold ratings. This costs £74.75, and is also available in a non-noose version for £20 less.

All of these chains have long links, which can be passed through any other link in the chain, keeping it shorter if you want to get it off the ground. They’re also all sleeved in a tough fabric that will protect your bike’s paintwork. 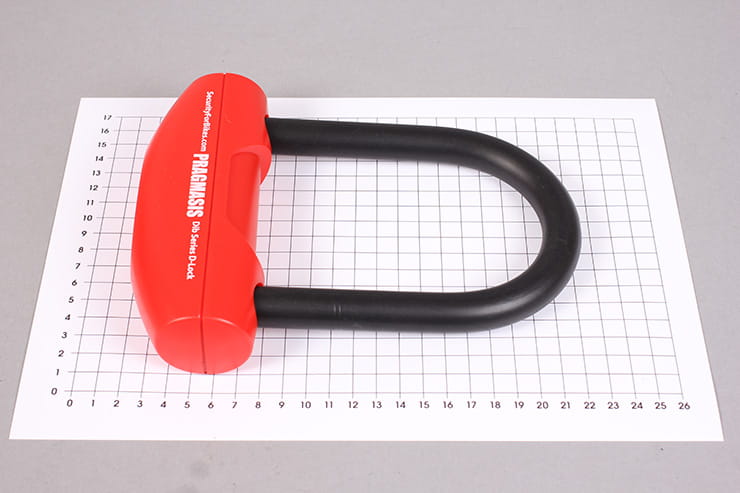 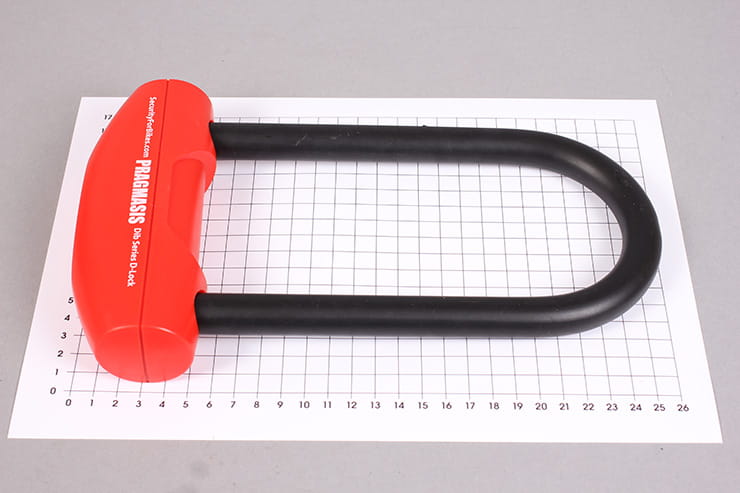 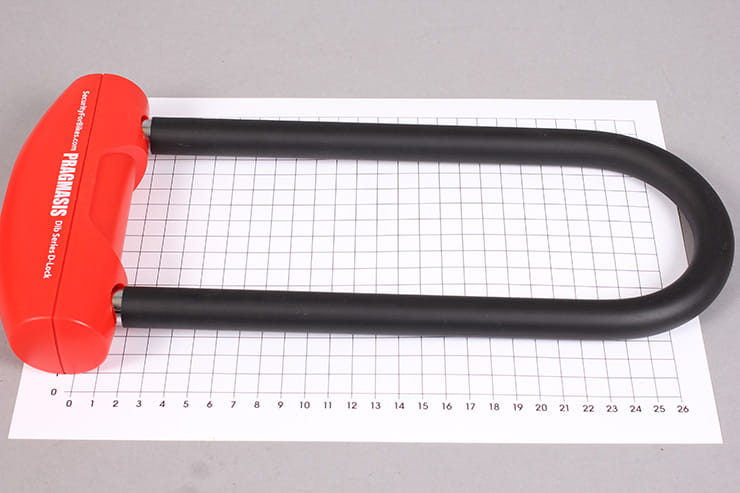 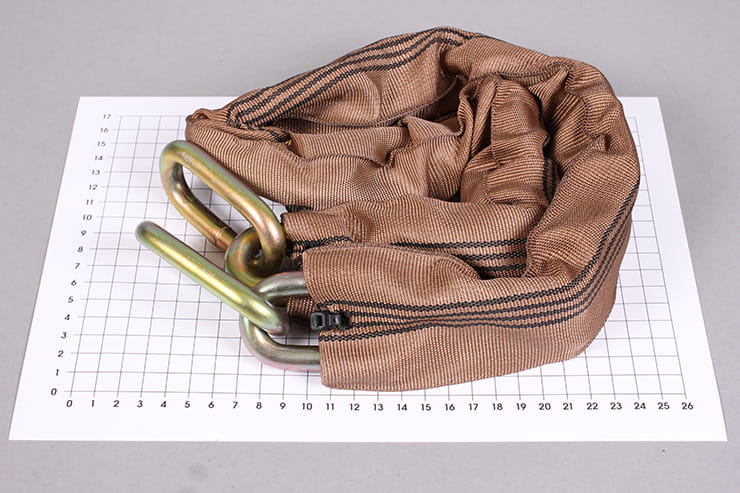 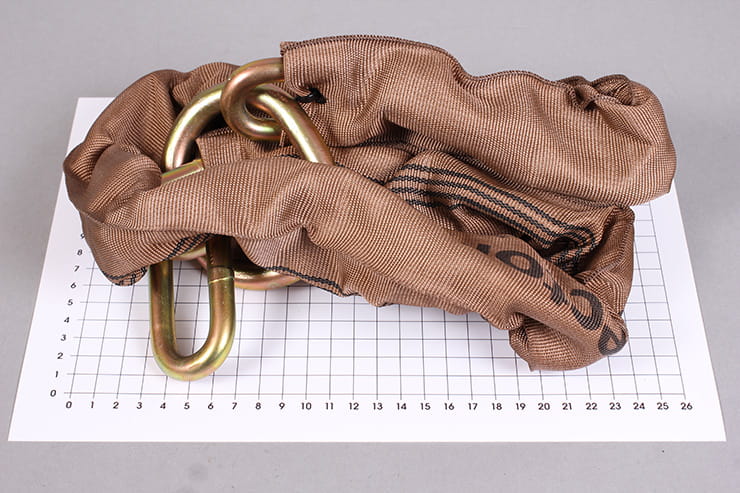 The chains roll up quite tight, so will easily drop into a scooter’s boot, and while there aren’t many motorcycles with the capacity to fit one (it’ll just go under a Suzuki GSX-S750 seat, or you’d likely be fine with an old Honda Fireblade), you could easily tuck one into a bag and strap it onto the tail, or of course it’ll all be easily swallowed by a top-box or pannier.

The U-lock fits through the front disc of most motorcycles and our test Piaggio Beverly 350 scooter, but you will struggle with others. However, the advantage of a U-lock (or D-lock) is that it’ll pass through the spokes of the wheel, around the fork legs, or around the swingarm and into the wheel. They can offer an exceedingly secure form of lock.

It’s important to be aware that small hydraulic jacks can be used to burst U-locks, so always avoiding leaving much more space than the size of your fist once it’s secured. Buy the smallest one you can, and if you need to use it across a variety of bikes, you can always save money by buying an extra shackle. And of course, you can use the Pragmasis DIB U-locks on your bicycle too.

The chains offer a second line of defence – by securing the wheel with the U-lock, and passing the chain through the shackle as well, if a thief cuts the chain (the weaker part), they still can’t move the bike or scooter – they have to cut through the shackle unless they’re picking it up and putting it in a van. With the biggest theft problem being scooters that aren’t even secured, this is a good solution. 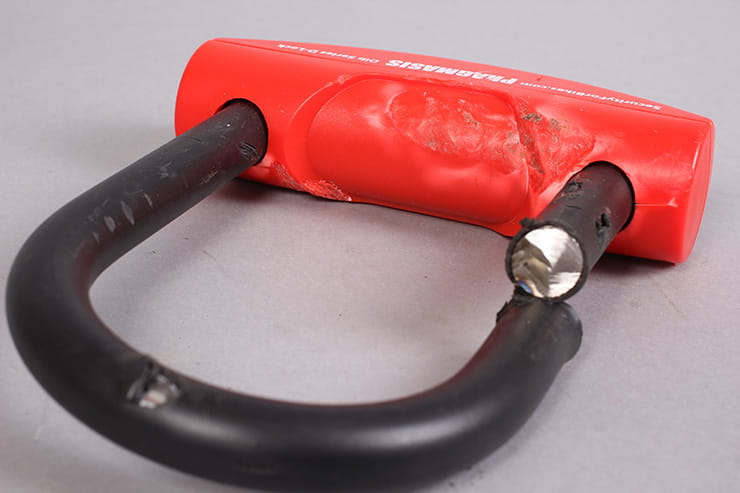 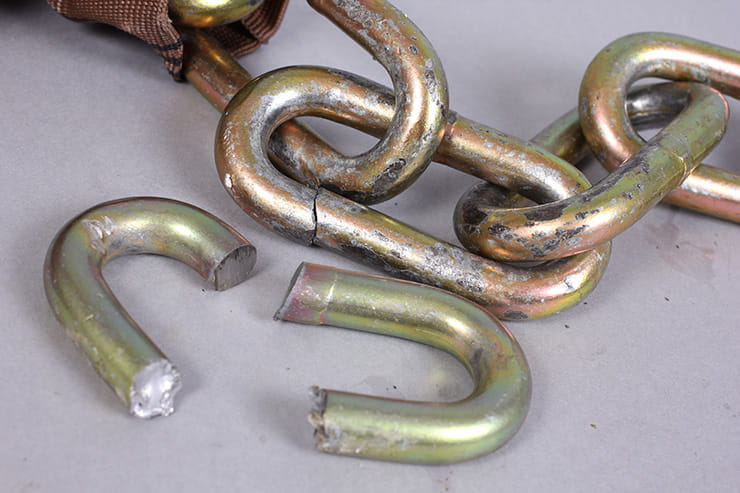 The Pragmasis DIB D-lock can’t be cut with a hacksaw or our huge 42” bolt croppers. Attached to the wheel, we were unable to smash it off with a lump hammer, and even given space and an anvil, we couldn’t break it with a large sledge hammer.

The only way to cut this U-lock is with an angle-grinder, which is very noisy. Of course, this does happen, but it’s far from common. The shackle has enough movement in it after one cut to allow it to be rotated and slipped off the brake disk, but it wouldn’t be enough to pass a fork leg, or some cast spokes (and the thick hardened steel is noisy and attention grabbing to cut even once).

The 11mm chain can’t be hacksawed, and under a sledge hammer attack it took a lot of time and an anvil to break it – if kept off the ground, it would be safe from this form of attack.

We were able to break it with the largest 42” bolt croppers, but this also took a lot of time, and the chain didn’t shatter when one side was cut – both sides of a link will need to be bitten through, which takes several minutes.

Pragmasis is keen to stress that its 11mm chain is not intended for serious motorcycle security as it’s the thinnest one the company makes – it can be cut relatively quickly with an angle grinder, though this would be noisy. If it’s used with a U-lock, it’s a very valuable extra layer.

The 13mm chain can’t be cut with bolt-croppers, so this silent attack is defeated. An anvil and plenty of space is required to defeat it with a sledge hammer, and this still takes several minutes of extremely noisy work. Cutting it with an angle grinder is the only real option, which takes a second or so more than the 11mm.

This is an excellent-value security option – the Pragmasis DIB U-lock is a tough, versatile device that can be used on a moped, motorcycle, scooter and your bicycle, while the chain allows you to tether something that already can’t be pushed away.

Of course, a determined thief will bypass any security given enough time, and these chains shouldn’t be considered as suitable for long-term locking, particularly at home outside overnight, but their portability makes them an extremely effective deterrent.

We’d recommend 1.2m of 13mm noose chain and the 190mm DIB D-lock for the greatest versatility (though check the dimensions of your wheels and buy the shackle length that suits); at a total price of just £122.70, it represents excellent value, and should cover most of your needs on any two-wheeler.