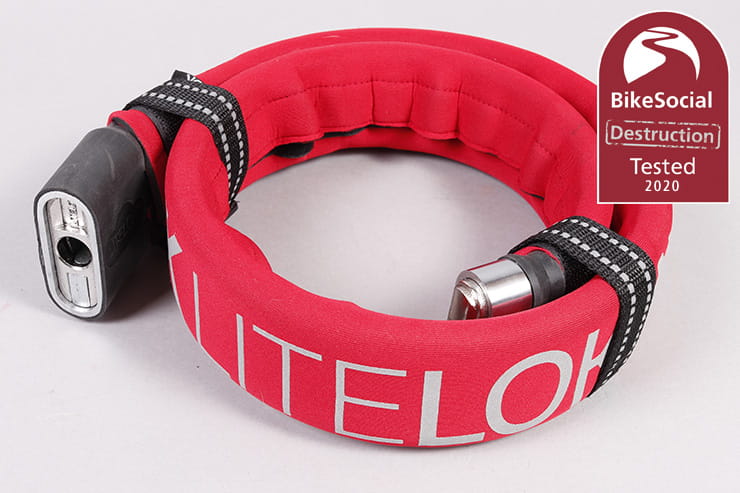 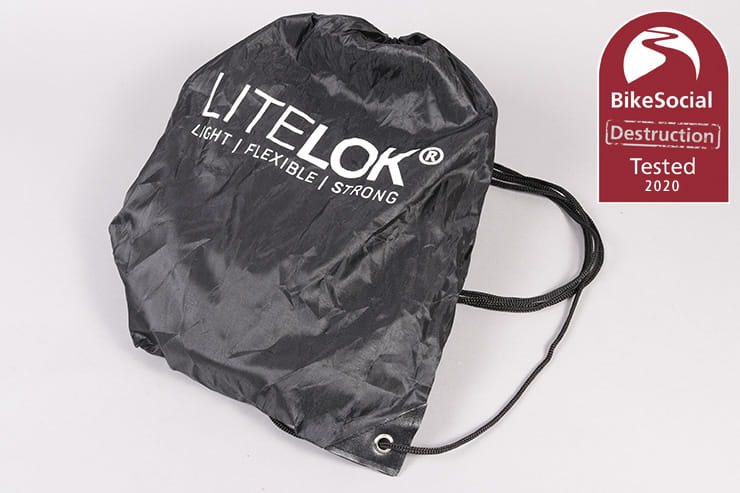 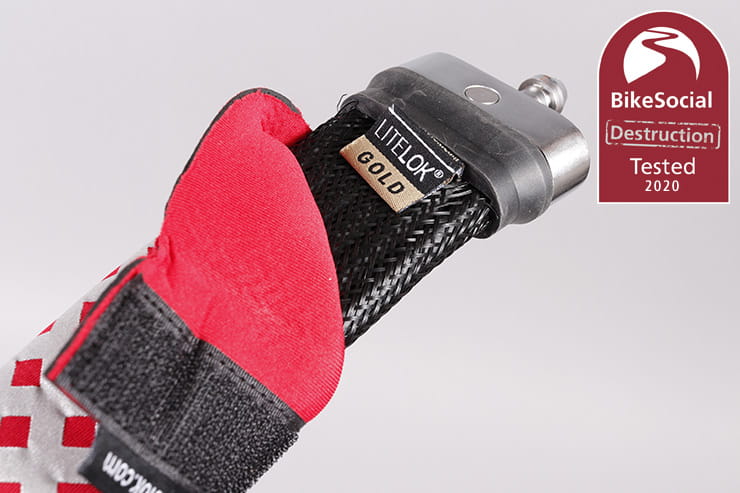 NOTE THAT THE 'LITELOK GOLD' HAS NOW BEEN DISCONTINUED, WITH THIS VERY SIMILAR LOOKING 'LITELOK ONE' REPLACING IT. THIS PRODUCT IS NOW ONLY RATED TO SOLD SECURE MOTOR SCOOTER SILVER, NOT THE PREVIOUS MOTORCYCLE GOLD.

YouTubers love Litelok. Or should that be the other way around? Generous with its affiliate links (discounts for viewers and a kick-back for the video maker), Litelok’s been described as one of the best motorcycle security products of 2020. Another video claimed to have ‘tested it to destruction’ after it survived a bolt-cropper attack.

On the other hand, the most popular lock-picking channel showed it being cut with cable cutters in just 16 seconds.

Given the excitement around this product, we asked Litelok if they’d like to send it to us for review, but after hearing of our attack methods they respectfully declined.

So we bought one.

At £139.99, it costs more than some of the 12-13mm chains we’ve tested, but it’s lighter than them all by at least a kilo; only the Kryptonite Keeper 785, with its 7mm chain, is lighter. And that was important as Litelok’s main selling point was that it’s a lot lighter than any other Sold Secure Motorcycle Gold-rated product (the Keeper 785 is only Bicycle Bronze). However, the Litelok One that replaces the Litelok Gold is Sold Secure to Motorscooter Silver. Even before the reduction in security rating, do keep in mind that the Motorcycle Gold rating does NOT include an angle-grinder test; only products rated as Motorcycle Diamond (or Ground Anchor Diamond) have been subjected to an angle grinder attack, though it’s part of all our standard testing…

The Litelok Gold Moto is the same product as the £99.99 Litelok Gold large, but it comes with two neoprene sleeves to help protect your paintwork. Made with six parallel lengths of rubber-coated steel cable, the Litelok comes with three keys, straps to keep it wound up and a drawstring carry-bag. 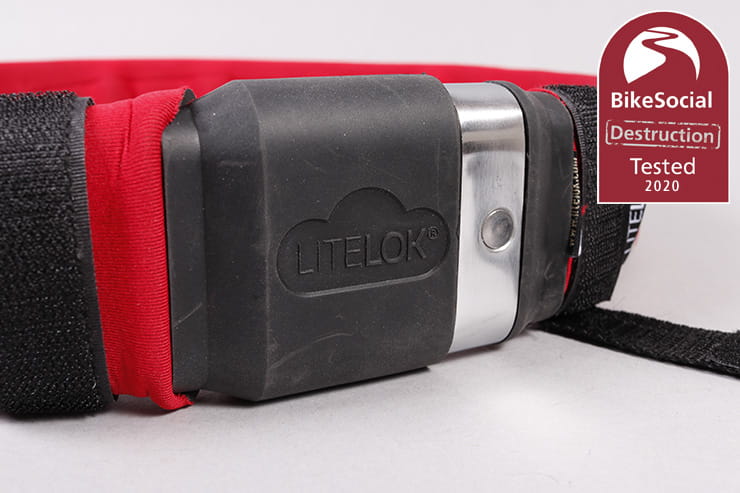 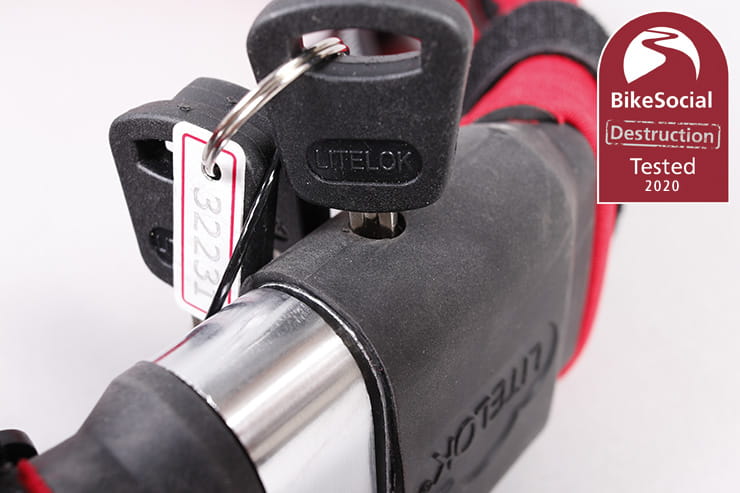 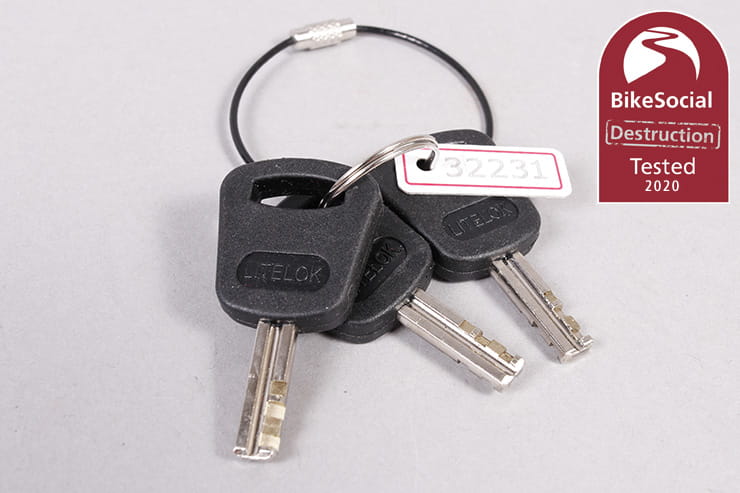 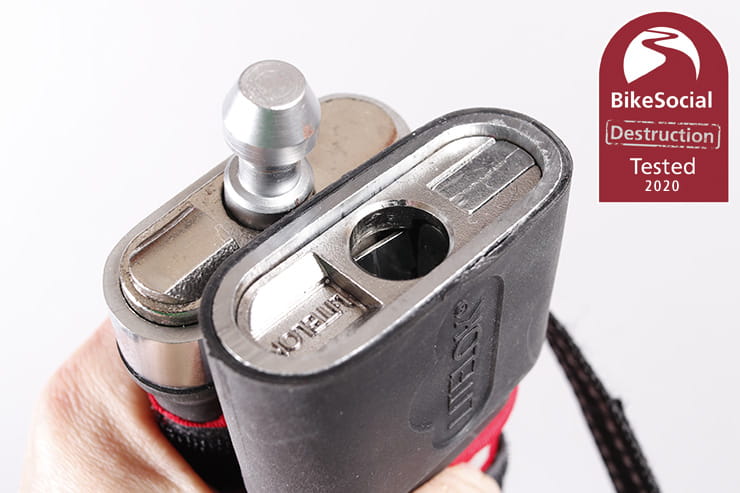 Weighing just 1.64kg, the Litelok is very light; it’s lighter than even the Abus Granit Steel-O-Flex, which makes it easier to carry in a rucksack than most other locks we’ve reviewed. Keep in mind though that if you do that, you must wear a back-protector to avoid potential injury if you were to fall off.

The Litelok doesn’t pack up particularly small – even with it pulled as tight as possible and held in place with the supplied straps, it’s around 25cm in diameter. It’s also a bit of a fiddle to draw it up.

This is unlikely to fit under many seat spaces; while motorbikes rarely have much space under the saddle these days, I did carry a chain and lock with ease under my Kawasaki Versys 1000.

Keep in mind that at just over 1m, you could be limited in what you can reach to tether your bike to, though you can buy two LiteLoks and join them together (of course, then you also have double the weight and twice the space to find). 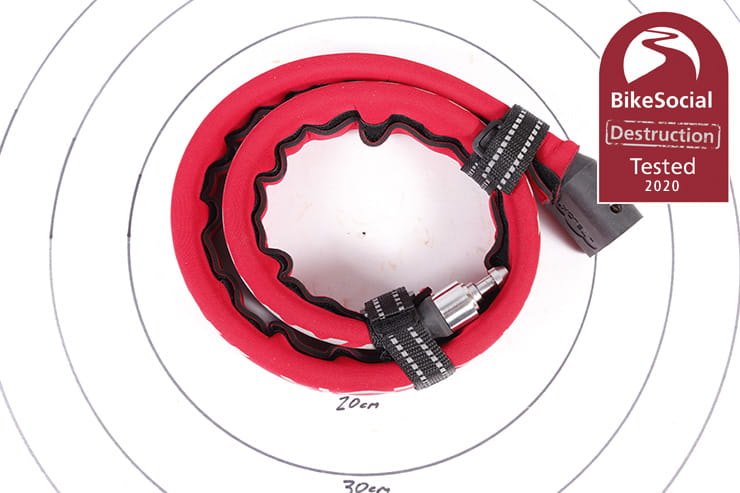 Unsurprisingly, as it’s the wrong tool for the job, our 42” bolt croppers were unable to defeat the LiteLok. Equally, a sledge hammer and anvil had no effect.

Using a long pry bar, I was also unable to twist the Litelok in such a way that it would fail.

With the Litelok pulled tight, I was able to cut it with a standard hacksaw blade, but it took a good four minutes. Out on the street, this is an unlikely form of attack and took a lot of effort, but unlike a quality hardened chain, it will fail eventually.

I was unable to make any useful progress with even large hand-held cutters, but a 28” long specific steel cable cutter got through in two bites, taking just 12.5 seconds. While these cutters aren’t currently known as being in regular use on UK streets, they’re not hard to get hold of and only cost £123.62. Thieves adapt, and with the increased use of bicycles (many costing more than some motorcycles), it’s not unlikely that criminals will change their behaviour.

Using an angle grinder, the LiteLok Gold Moto was very quick to cut, giving an equivalent resistance to a 9mm chain under test conditions, though in the field a chain will be slightly harder to control.

The lock body stood up well to attack, suffering only surface damage with a sledge-hammer and anvil, even with lots of space to swing.

There’s no point in attacking the body with an angle-grinder as it will take longer than the cables.

I also tried drilling out the pin that secures the crimped cables to the lock body – while it was possible to get it out, it took a fair amount of work, and was very tight to drift out once drilled, so this isn’t a realistic attack in the field. I was unable to drill the key way. 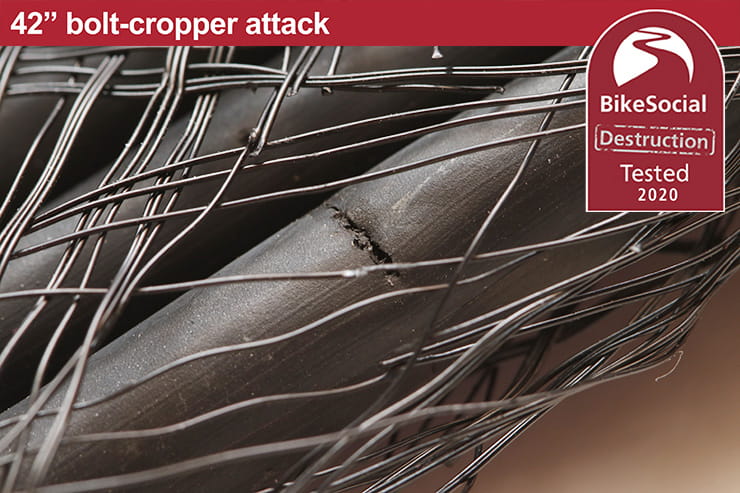 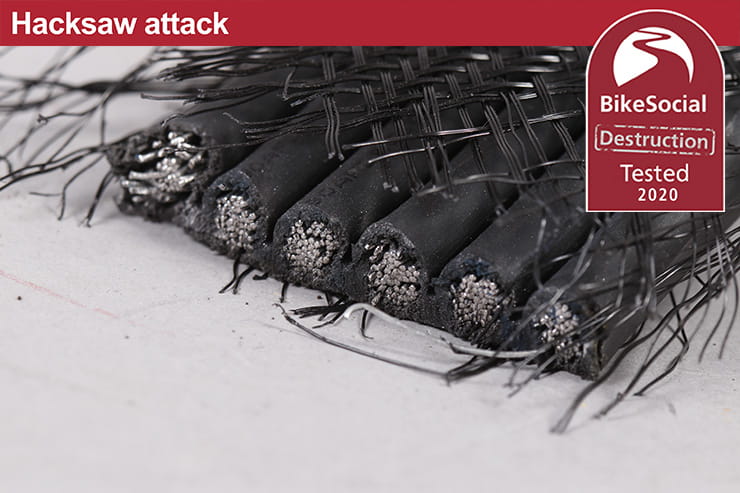 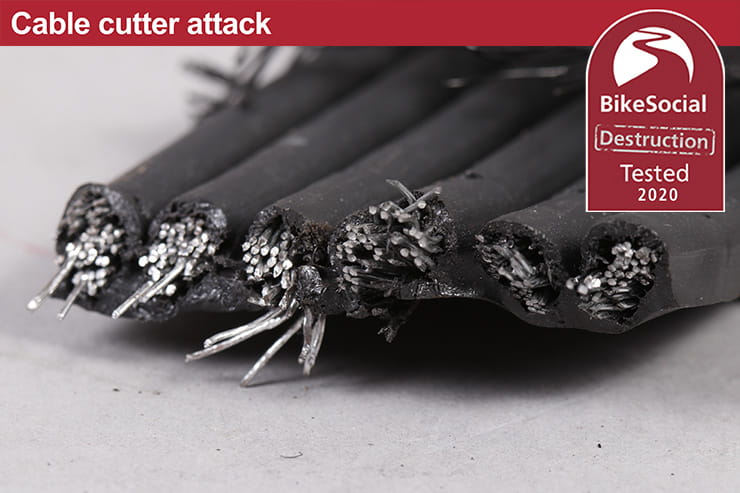 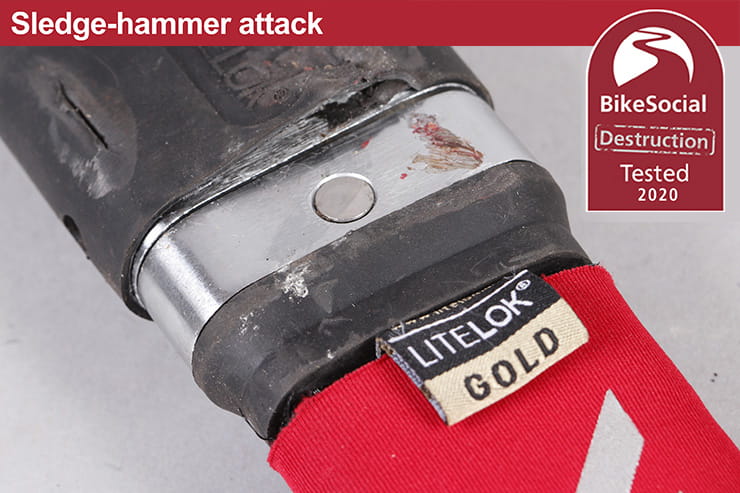 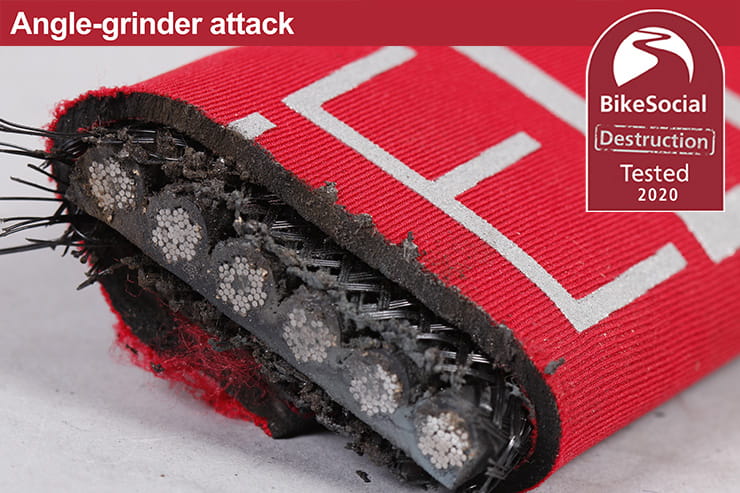 A few years ago, some cable locks were downgraded from Sold Secure Motorcycle Gold to Motor Scooter Silver when thieves started using cable cutters to attack the products. Litelok Gold Moto has now been discontinued, but the very similar-looking Litelok One Moto is now available with a Motor Scooter Silver rating.

The angle grinder time is poor, but if a thief is willing to use one, the extra time a lightweight chain could make is of questionable importance. My only worry is that this ‘looks’ like it’ll be easy to attack, which might make some criminals more willing to have a go, especially if faced with a choice between a bike with this, and another with a chain.

If you carry your security on your bike, the weight saving might be less attractive than something that takes up a similar (or less) space, but with a higher resistance to attack. Ultimately, the vulnerabilities of the Litelok don’t make it an ideal product, so unless weight is a primary concern to you, I’d recommend looking elsewhere.