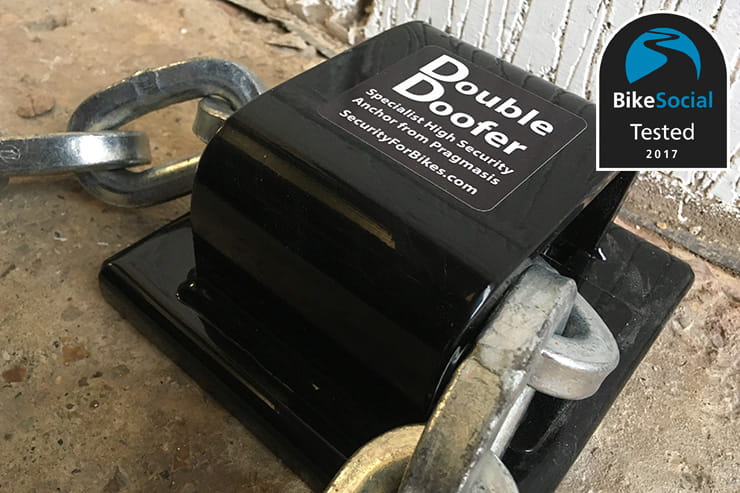 A ground anchor has to be solidly mounted – once fitted, they’re usually there to stay, which can be an issue if you live in a rented house for instance, or know you’ll be moving soon and don’t want to leave your security behind.

Pragmasis claims that its Double Doofer ground anchor can be removed by the owner, but not by a crook. A base plate sits under a cover, which protects the fixing bolts – this in turn is kept in place by the chain, the size of which can be adapted to by using two 5mm-thick adaptor plates.

We asked BikeSocial Test Team member Steve Lamb to fit one and give us his opinion – he’s recently bought a Ducati Scrambler, but is also in the process of moving house… 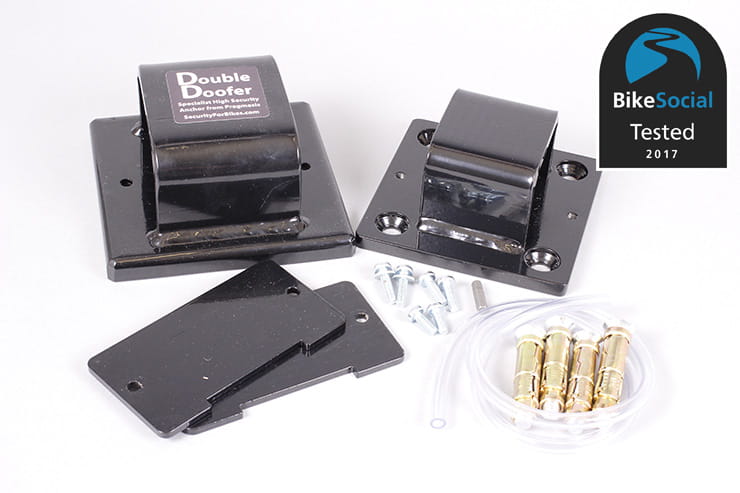 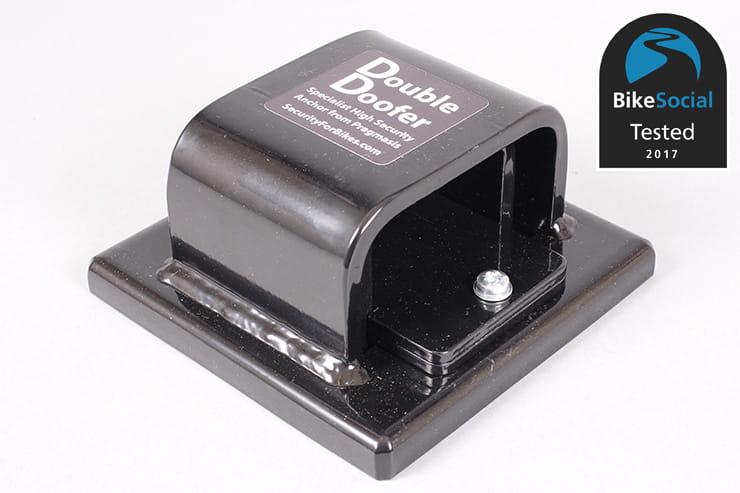 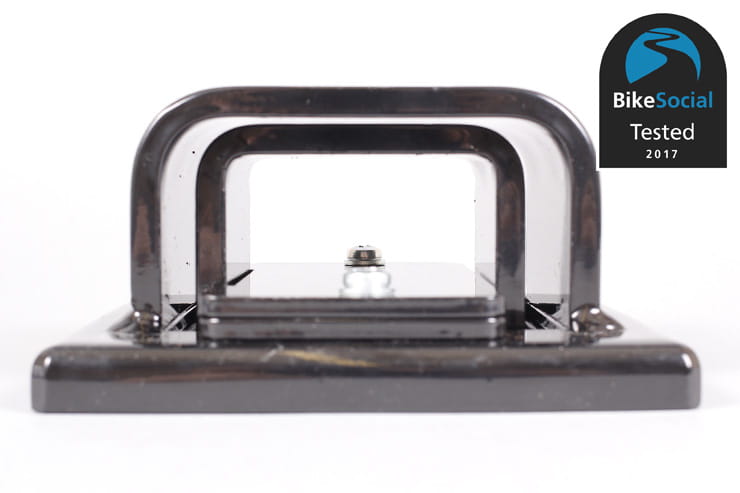 • It’s built using 8mm-thick case-hardened steel. If attacked with an angle-grinder, both the cover and bridge sections would have to be fully cut

• The anchor has a zinc-phosphate corrosion protection, followed by a powder-coated finish

• It comes with all you need to install, except a DIY power-drill

• Pragmasis designs and makes it in Britain

The supplied instructions are absolutely superb, going into great detail about how and where to fit the anchor, as well as explaining the limitations of any product like this; there really is no question left unanswered, but the clear sections don’t make it a chore to work through.

The Double Doofer is supplied with your choice of a 16mm drill bit with a standard 12mm or an SDS shank; an SDS impact drill tends to be easier – it’s what I used – but a reasonable quality standard-chuck drill should still be suitable for most concrete floors or brick walls.

I chose to mount into the floor, rather than the wall, but as it’s a bit of a rough surface, I first chipped away any small lumps of concrete, to allow the anchor to fit flat – it’s important a crook can’t get anything under it to lever it up. 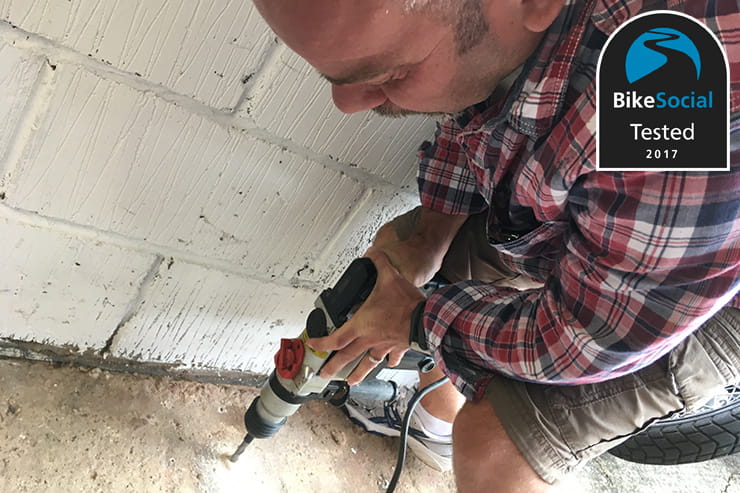 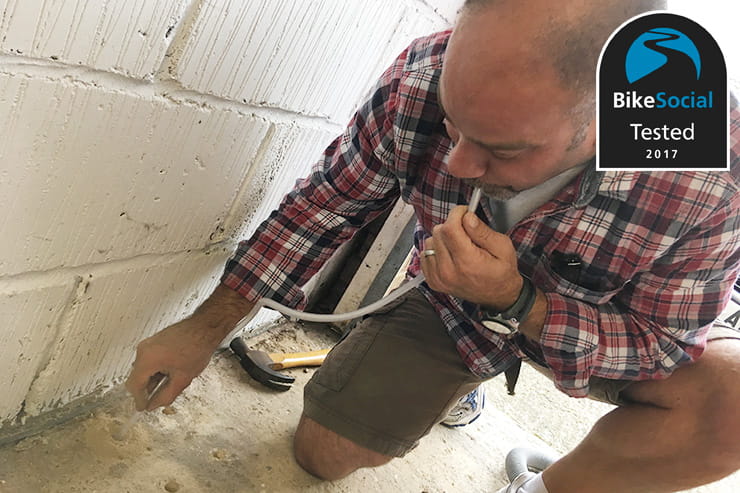 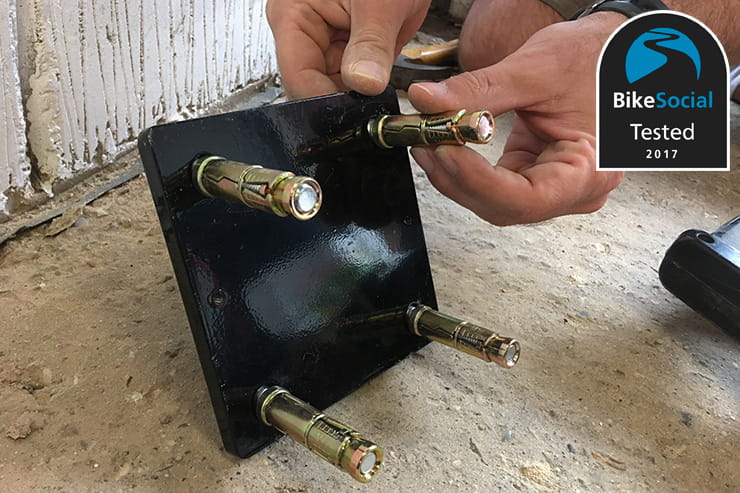 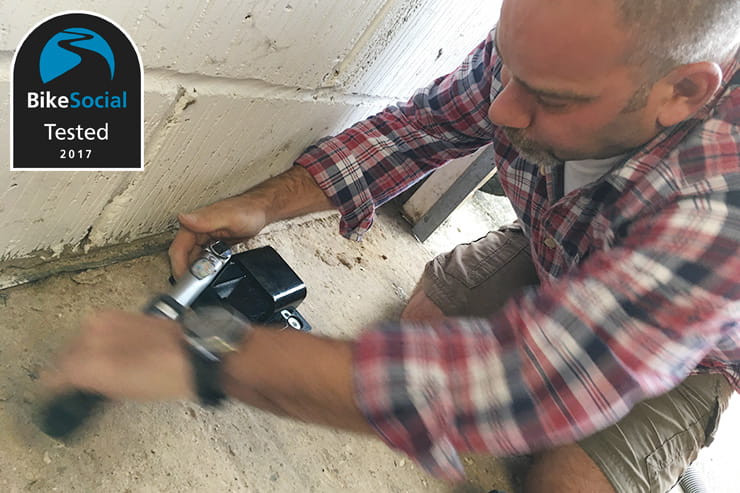 The four bolt locations were marked with a pen, then the correct depth was easy to drill as Pragmasis wraps a piece of tape around the bit at the point you should stop – brilliant! I was then able to blow the dust out of the hole with the supplied tube before hoovering it away. This company really has thought of everything.

The four M10 x 70mm high-tensile expansion bolts are assembled loosely on the anchor, which is then offered over the holes – mine lined up perfectly, but the instructions say that if I had been slightly out, I could have opened the holes up a little by re-drilling. I just needed to tap the anchor’s base home with a mallet and it sat perfectly flush with the floor. Another excellent design point is that the anchor is square, so if you drill the holes with it in the wrong orientation, you can easily move it through 90° before bolting down.

I used a torque wrench to tighten each bolt to 40Nm, but a long-armed allen-key is supplied. I tried this, and it’s possible to get enough leverage to do the four bolts up tightly, but it is a little easier with a hex key and wrench.

On other bolt-in anchors, the next step would be to drive ball-bearings into the fasteners’ heads to prevent them being undone. In this case, the cover protects them when the chain’s installed.

I’m using a Pewag 14x52 chain, so needed to fit one of the adaptor plates into the anchor. This has a notch that stops it being slid out, as well as a pair of screws (three different length pairs are supplied), though these are purely to stop the plate moving when you fit the chain – if removed by a thief, they have no impact on the device’s security.

With the chain in, it’s impossible to lift the cover to gain access to the base’s fixing bolts. It really coulnd’t be simpler – the instructions give a very clear explanation of how to check the fit of your chain, and describe how a thief could attack this device if it wasn’t correctly set up. 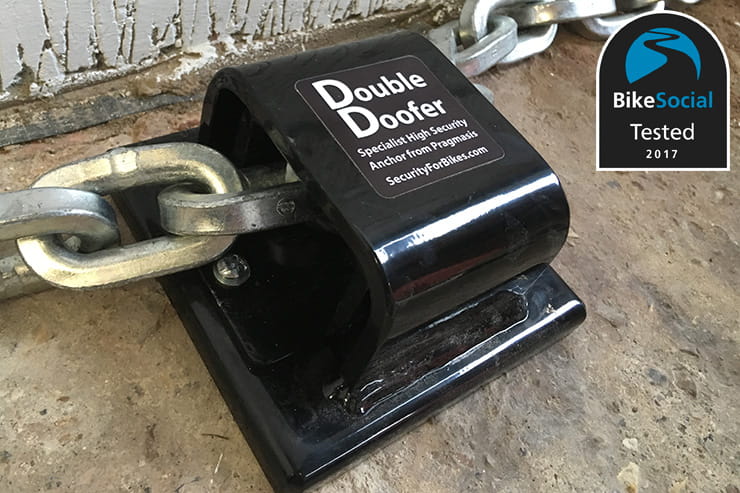 My chain is a snug fit, so it’s takes a few more seconds to remove if I want to take it with me than a more open, traditional anchor. But that’s a small price to pay for such a level of security, even before you consider that I can whip this anchor out and fit it to my new garage when I move. The anchor bolts might not come out complete, but if they don’t, a new set is very cheap.

Even if you’re not moving house, or even just planning on shuffling things around in the garage, the Double Doofer is superb – the two 8mm-thick sheets of steel make it much more difficult for a thief to attack than the chain and lock, so it really does give me peace of mind.

Of course, anything can be defeated with enough determination, but getting a bike that has a decent chain on it free from this will be a very noisy challenge.

Pragmasis has clearly put a huge amount of thought into this product and supplying everything you need, as well as taking real care over writing the instructions, makes it a brilliant piece of kit.

Before sending Steve the anchor, I tested the Double Doofer with several of the chains I’ve already tested for BikeSocial. I found an Abus Granit Power Chain 37 needed one adaptor plate, as did the Oxford Monster XL. The Oxford HD required two plates and the chain to be passed through twice, so check that your chain is long enough if you need to do this. Having said that, a lightweight product like the HD really isn't suitable for home security – it's more of a carry-around chain as you do need something heavier at home.

The Almax Series IV Uber was a good tight fit with no plates, as was the Squire Colossus. The biggest currently available chains – with links up to 22mm in diameter – won’t fit in the Double Doofer – you’ll need something like the Pragmasis Torc for that. John

After moving to a new house in January 2018, and undertaking a time consuming repaint and re-fit of the garage, in September 2018 I had settled on the parking position of my bike, and it was finally time to refit my Double Doofer. In a slight change to the original installation, I decided to fit it to the breeze-block wall of the garage. This was mainly due to the unusually tough concrete floor which was beyond the capabilities of my un-branded hammer drill, but also to lift the chain from the ground to make a potential sledge hammer attack just that bit more difficult.

Before leaving my last house, the supplied fixings were extracted, but not without some damage to the rawl-plug style anchors (pictured above), so after a quick check of measurements, replacements were obtained from a local hardware store.

Re-installation in my new garage was as easy as the initial installation and I am pleased to say that the wall-mounted location was a good move as, not only is security slightly improved, but operation is also easier making it even more likely that my bike will never be left unsecured.