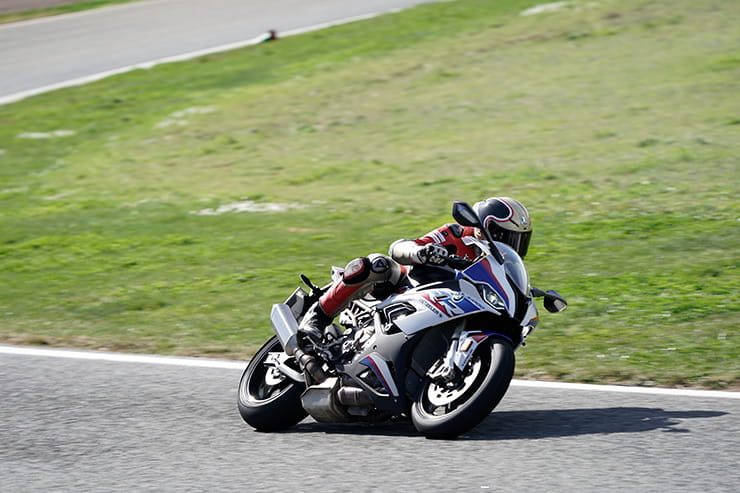 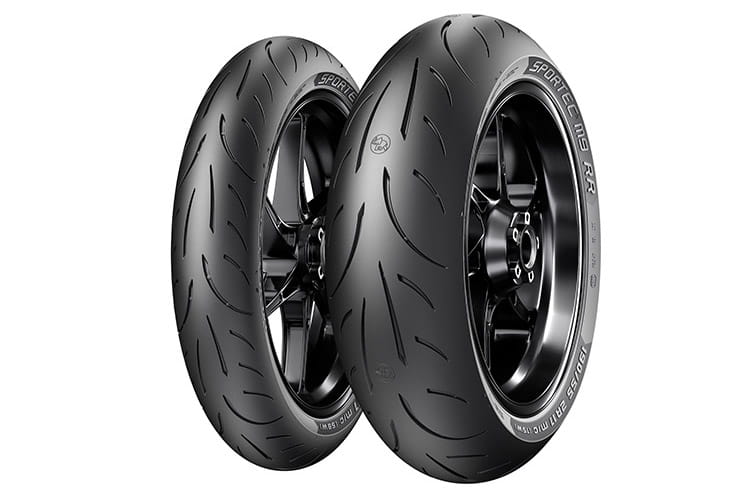 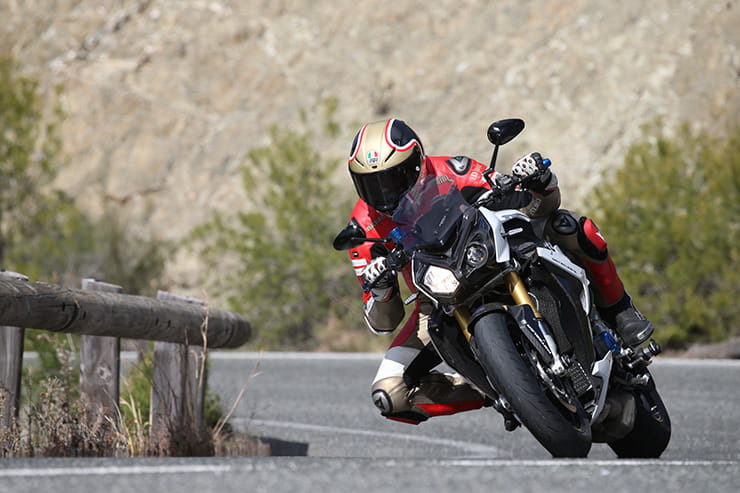 Metzeler has been making motorcycle tyres for 128-years but it wasn’t until 2013 when the German firm got involved with modern-day British road racing to prove themselves, and since then they’ve tasted victory at the Isle of Man TT, North West 200 and Ulster Grand Prix no less than 58 times (split 16/32/10 respectively), across both slicks and treaded tyres. So, we’ve no reason to doubt their ability to produce some top-spec sporty rubber, right?

After all, the outgoing M7RR has enjoyed quite the success story since making its debut also in 2013. So, the heir to that particular throne and the latest supersport tyre, the Metzeler Sportec M9RR, has some big shoes to fill and the claims of its enhancement are bold; better all-around the spider chart in terms of mileage, dry grip, lap time, consistency, handling and wet weather performance. Off we went to the roads around Ronda in Southern Spain plus the private Ascari test track to assess the declarations of this latest road and track-biased rubber.

New compounds and layout of those compounds plus a whole new carcass construction had led to a 5% increase in effectiveness of the contact patch while at lean and a 3.4s improvement in lap time at the 5km Pergusa test circuit on the same day, in the same conditions, with the same rider, on the same BMW S 1000 RR using the M7RR followed by the M9RR.

Rival manufacturers have been updating their products in this road and track-oriented field and in recent years not only have the power, torque and electronic interference in the naked and sports bike arena increased significantly, that of course means tyre manufacturers have had to stay one step ahead and offer versatile and all-action tyres. If you’re looking for more track focussed treaded rubber that can cope with the dry, wet, loose and undulations of the UK roads then the likes of the Bridgestone Battlax S22, Pirelli Diablo Rosso Corsa II, Dunlop SportSmart TT or Michelin Power RS would be the natural competitor to the new M9RR. 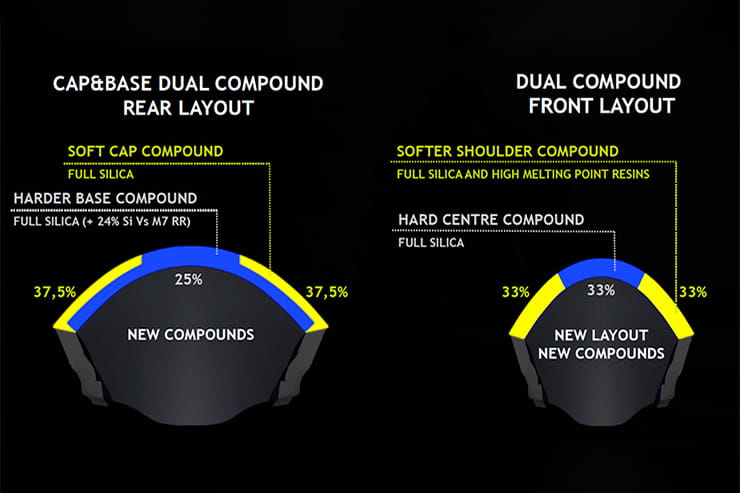 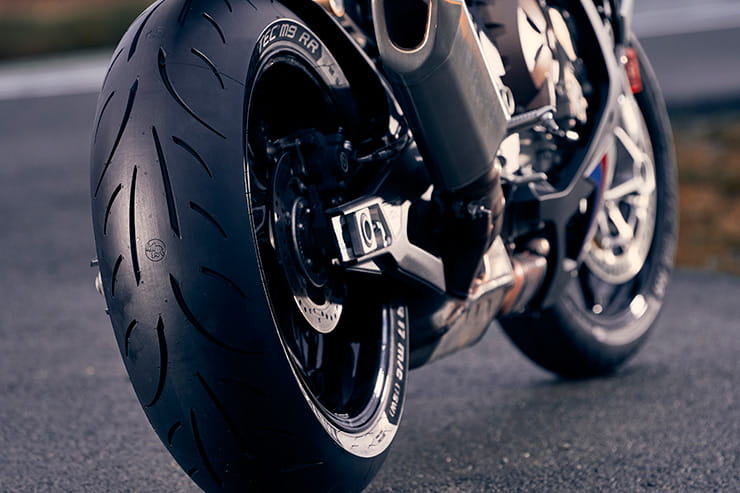 Above: cross section of dual compound layouts across both front and rear

The front and rear M9s are both dual compound tyres and both use the same compounds for more predictable response. In the front, the central compound makes up around a third of the tread section with the other two thirds split equally on each side across the shoulders, and are slightly softer, to provide support and grip at lean.

At the rear, the compounds are arranged using a Cap and Base layout, where the harder base compound, present across the central quarter of the width of the tyre, is also used underneath the remaining 37.5% on each of the two shoulders, as a base layer which has a softer ‘cap’ over the top, as demonstrated above.

The compounds used are 100% silica which is said to improve warm-up time and abrasion resistance. The construction can be split into three categories; the slick shoulders for the sporty riders at full lean, the mid-lean grooves for water drainage and wear uniformity plus a central slick strip to carve through standing water and offer stability when the bike is upright.

The carcass construction is new with stiffer but less cords (the vertical ‘wall’ part under the exterior), which assist with the claims of extra grip, performance when worn and riding pleasure.

Matteo Torchiana, Head of Hypersport Development, told us, “It’s an evolution, a step forward from M7 - a multiple test winner all over the world - and the big effort in the development of the M9 was to overtake the M7 in all the areas from street, racing and sport touring sides. The product is changing but also so is the market, so we wanted to offer a supersport product that are not only the superbikes but also for the naked, all displacement and the crossovers too for use in sporty as well as every day and in different conditions.”

Only available in a 17” fitting, there are three sizes for the front and nine on the rear 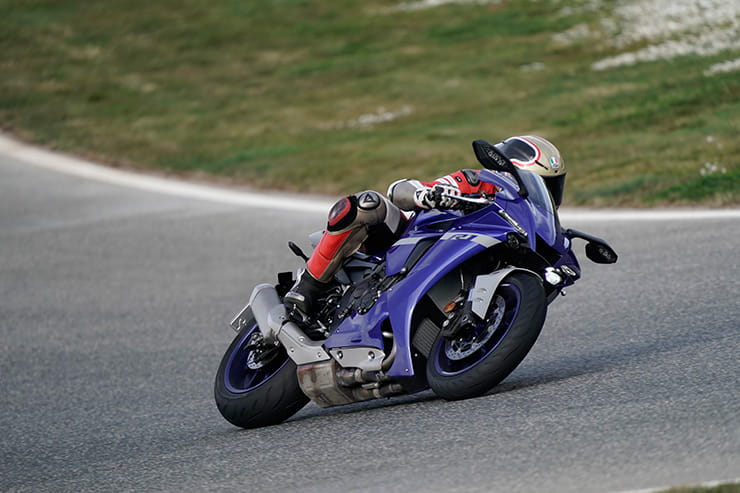 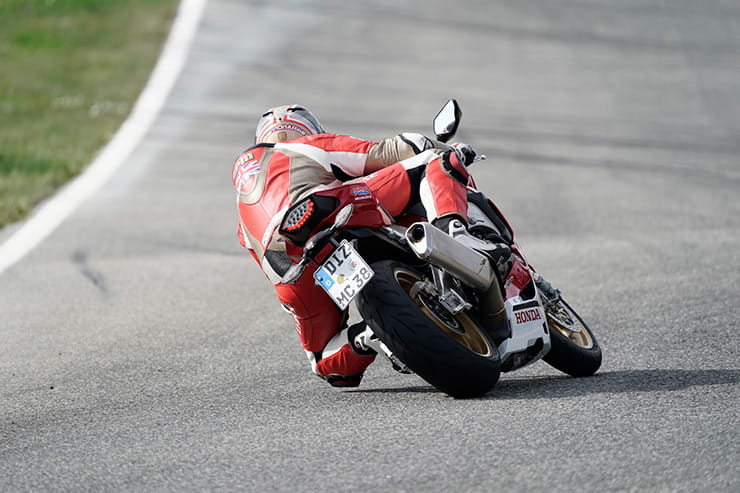 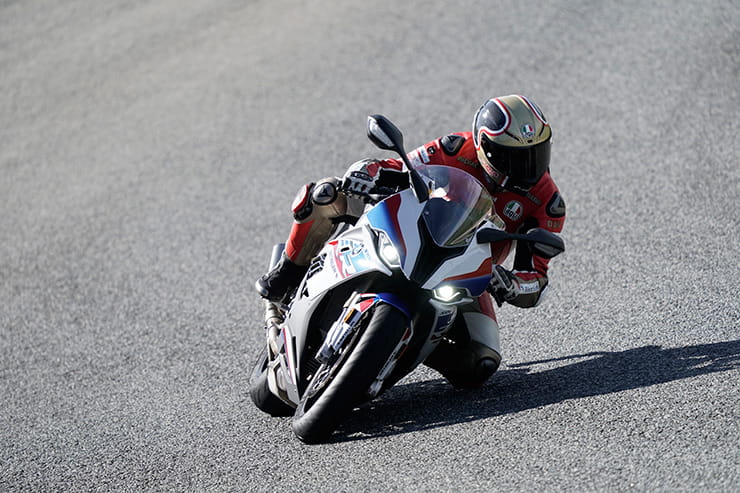 Even though the press launch saw a 50:50 split between road and track riding, which in turn offered big litre sports bikes to thrash about on, the bias is 80:20 in favour of road vs track operation.

An attractive line-up in pit lane included the new BMW S1000RR (Sport and M Performance versions), a last generation Honda Fireblade SP, a Yamaha R1, Ninja ZX-6R alongside a BMW S1000XR and KTM 790 DUKE so there was plenty of choice with which to push the M9RRs around the 2.5-mile ‘dry’ layout that mixed banked corners, elevation, hard acceleration areas and fast, progressive turns. An abrasive-looking surface and plenty of room on track were the perfect components to get an idea of how these new Metzelers were going to perform. With that ‘80:20’ ratio ringing in my head, and even though I knew the tyres would warm-up quickly, I still took it steady for the first few laps, especially when coming into the first right-hander – the second part of the Senna S, an 80mph second/third gear right – which comes after four consecutive lefts.

Once I felt comfortable to push on, I was particularly enamoured by the predictable nature of the lean. From upright over to my maximum lean angle was smooth, progressive and quick to get through the transition. It also offered a plush ride over the lumps and bumps of Ascari which were apparent in the slow-motion video footage seen afterwards. On the brakes and again the tyres, particularly the front, were stable enough for me to keep pushing – I trusted their predictive nature which is evident into turn one – an uphill, off-camber right-left chicane where you brake and turn while slowing from 143mph in 4th to 60 mph in 2nd then straighten the bike up and ride the kerbs on either side. Again, a very good test for the tyres, suspension and stability of the bike.

Unfortunately, after oodles of confidence, failure has been known to occur and on one YZF-R1-mounted lap, I applied a gentle amount of throttle (honest) when at lean around the gently-banked, left-handed, second-geared ‘Spa’ corner and the rear wanted to propel me moonwards. Mercifully, it failed. The warning signs had been meek, if at all apparent but a slide like that tends to evaporate a hefty chunk of confidence. My skeleton and Dainese leathers remain indebted to a combination of the Yamaha’s electronics and my several years of track riding experience to keep it all rubber-side down.

Breaking traction is usually tricky when equipped with modern day sports bikes (depending on the settings of course) and their wealth of electronics to keep everything in check. While rear end grip is manageable under ‘normal’ circumstances, my little episode was a decent reminder of the expectations of these tyres; 80:20. For track use, I’d be wary of using them in conjunction with 200bhp over six sessions in the fast group. 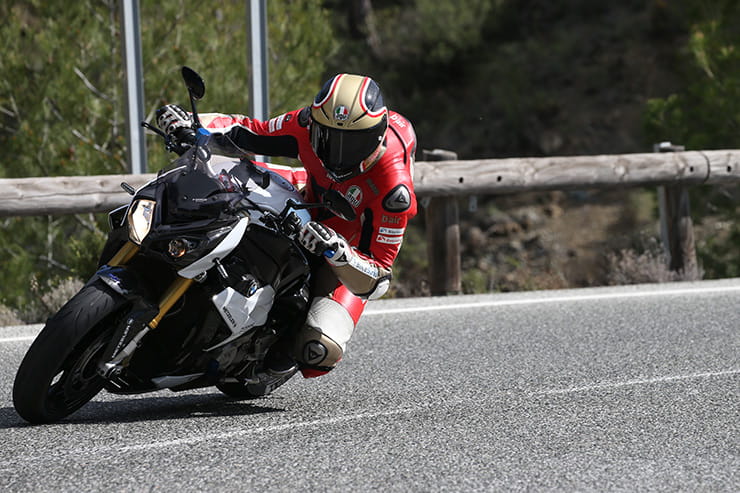 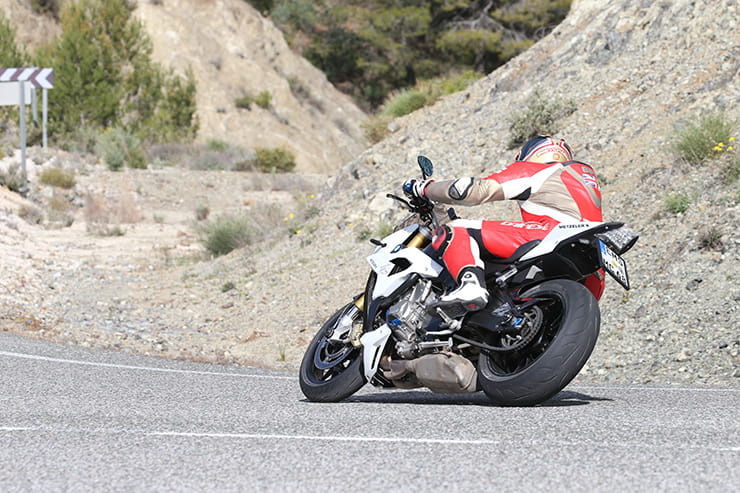 Smooth, supportive and trustworthy – I wouldn’t hesitate at covering some big, interesting miles on these tyres with complete faith. I completely get why the M9RRs are so biased toward quick road riding. They take a while to get up to a good operating temperature, ‘but you’re in the South of Spain,’ I hear you say, which is true but the ambient temperature wasn’t all that. Even so, the 158bhp BMW S1000R on which I was based was well suited to the Metzelers – I felt comfortable on the tyres as the 100-miles around the Ronda area treated us to a mixture of 2nd and 3rd gear mountain passes. Some quick and committed and some slow and sharp. Braking, turning-in and accelerating away felt comfortable and after only a short while I began concentrating more on the heated grips and mode settings that the tyres. I think that speaks volumes when you build such instant confidence.

Knee down on both right and left side on an 80% biased street tyre also helps with confidence in the material keeping you attached to the road. The press launch didn’t allow us to try the tyre over wet surfaces on the road section although some of the roads west of Malaga aren’t the smoothest; cracks and overbanding can be a motorcyclist’s nemesis, especially when greasy – though with the BMW’s suspension acumen plus the new M9s, I felt very comfortable even over the undulations and imperfections. 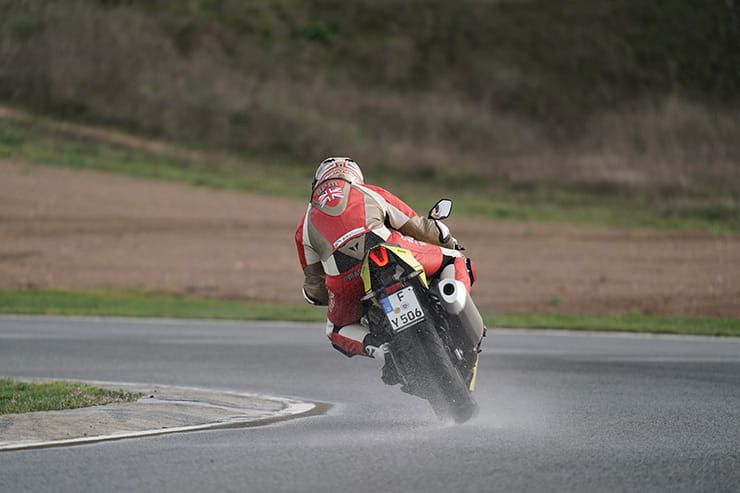 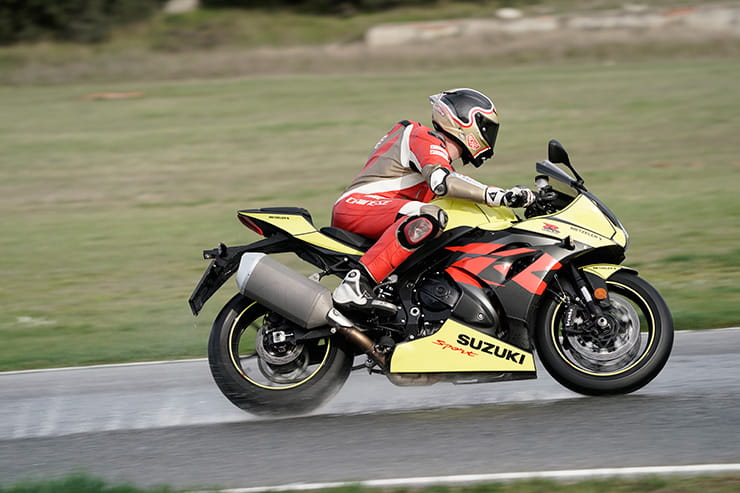 Despite having no opportunity to ride on any wet roads, a section of the Ascari circuit was sectioned off and deliberately soaked. An American journalist decided the ZX-6R he was riding might be better off laying down so I only had three circulations on a GSX-R1000 to get any kind of understanding of the wet weather performance which was very little. I had the big Suzuki dialled into level 6 of 10 on the Traction Control setting and the rear didn’t break away once. I built up speed in coordination with confidence per corner and even though my pace wasn’t exactly lap record bothering, it was enough to get an inkling that the M9s are going to offer a decent level of wet weather performance. I don’t want to lead anyone on here with boasts of exceptional grip when the opportunity to try was cut short. Let’s see if a proper UK road and track test later in the year can offer a more realistic view. The same can be said for durability though I’d put my mortgage on plenty of riders squaring off their tyres long before they realise they claim wear should equal a new set.

On the road, I felt confident in the product and could commit without hesitation to every corner. The upright balance, noise and comfort was ideal – though not largely better or worse than I’ve experienced before.

There are rival tyres more suited to a more track bias type of riding mix but if the majority, if not all, of your miles are going to be on road and at more than commuting pace then the new Metzeler options are going to be a popular choice. The development of the materials and their construction has taken into account an impressive array of variables from weather to surfaces and rider ability to bike performance and to have created an everyday tyre for all (ok, most) seasons that has high levels of ability on track too is worthy of merit.

Despite the on-track slide, the tyres allowed for plenty of deliberate ham-fistedness and on assessment straight after four back-to-back sessions (journalists from two groups were sharing bikes) where the tyres were going through repetitive heat cycles and subjected to different levels of ability from town rider to former BSB competitor, the wear evidence was impressive.