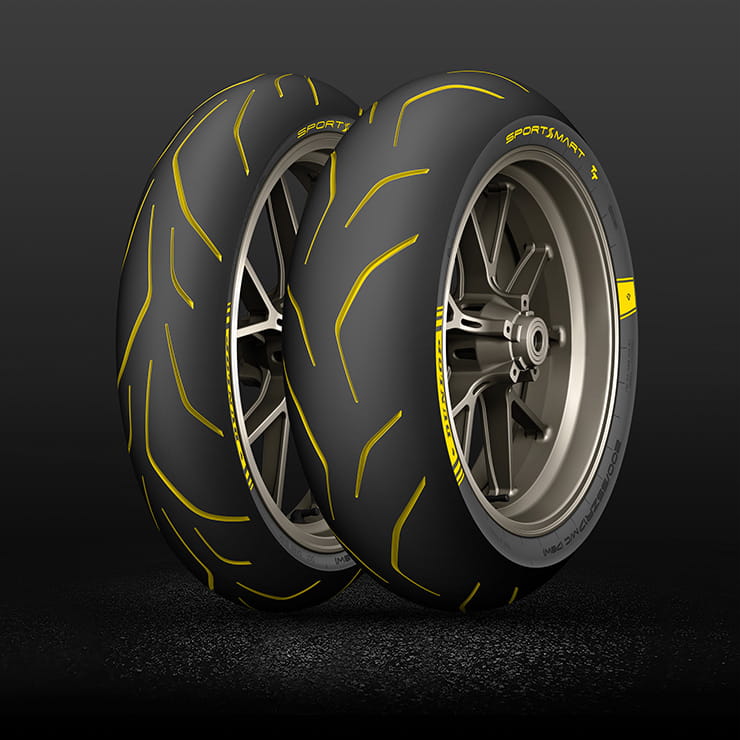 There is a certain inevitability, like day following night, that tyre manufacturers are forced to continue to develop and evolve both the technology and the ability of those round black pieces of rubber that are so important when it comes to motorcycling. Why? It’s down to sheer amount of power and the electronic ability of modern day bikes that continue to get stronger and stronger and put more and more force through the tyres. Customers cry out for grip and longevity depending on circumstance.

The good people at Goodyear and their company Dunlop have come up with a brand new product that slots into the existing range in between the easy racing/track day regular GP Racer 212 and the more road focussed SportSmart 2 Max. 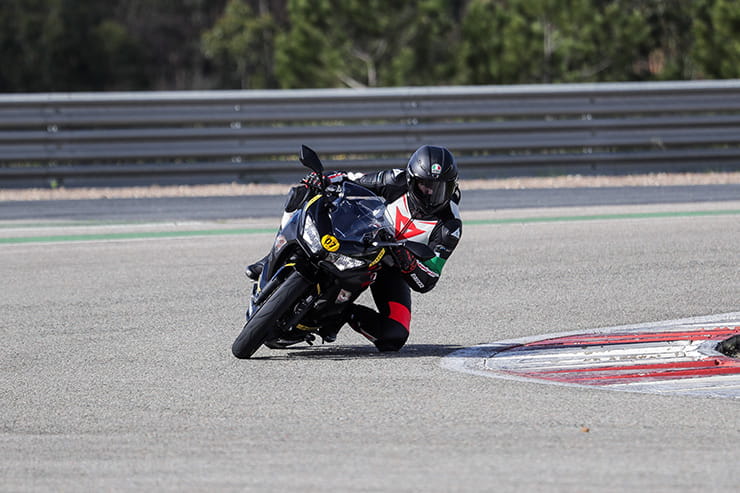 It’s called the SportSmart TT and it targets those looking for a versatile set of tyres for quick grip to spank around on a track day with the longevity required for some aggressive road riding tyre as a 50/50 split. Fast to warm-up with no need for tyre warmers thanks to its detailed casing design and high performance compound yet durable enough for consistent performance was the aim of the game. TT stands for Track Technology incidentally, not Tourist Trophy nor any Isle of Man connotation.

Despite the changing face of the sportsbike market, track days are still popular as are high performance supernakeds and roadsters. In fact, Dunlop believe the Hypersport and Sport touring sectors are on the rise with projected growth in the coming five years and accordingly have created the SportSmart TT to serve this dynamic as ‘regular track users’.

I wouldn’t be surprised if they end up as OE tyres on some of the European litre nakeds in the near future, a notion Dunlop didn’t disagree with. “We’ve had some positive conversations,” said an insider. 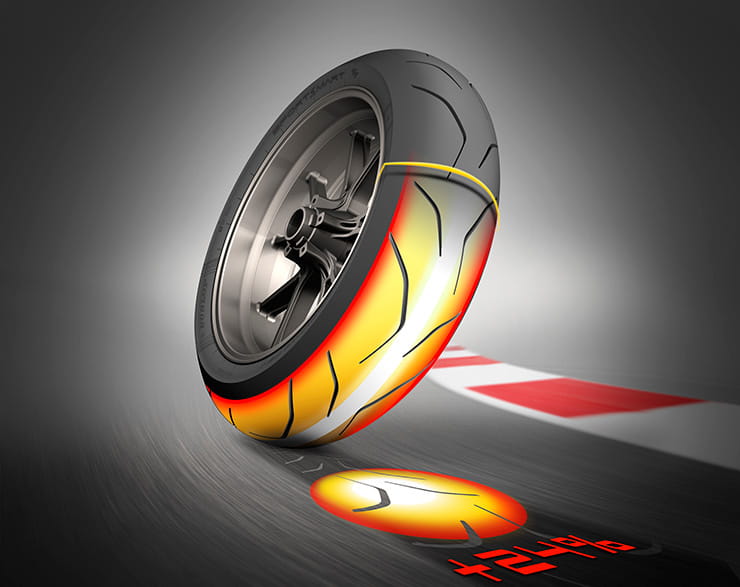 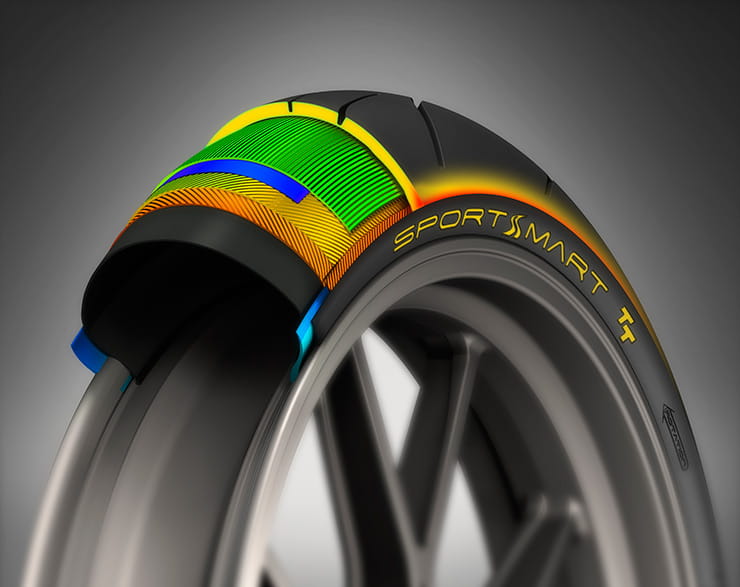 Mechanical grip on the track is increased by the tyre having a greater contact patch with the tarmac. How? By lowering the pressure thanks to the construction and NTEC RT (Road and Track) casing of the rear, specifically. A recommended 22-28 PSI allows for an 24% increase in contact patch say Dunlop. To put that into context, an OEM recommendation for road use is more like 42 PSI.

The front tyre not only has a new tread design, known as SV or Speed Vent because of its ability to not overheat and therefore last longer, but also a revised section design and profile. This, Dunlop claims, allows for reduced steering effort, better turn-in grip and stability when braking in corners.

The tyre firm spent 2.5 years planning, constructing and developing the SportSmart TT and used plenty of racing knowhow along the way The front offers “race tyre-like feedback in the corners” and a “rare balance between agility and stability” so says the brochure but it has to be said that on first impressions using the new rubber at the press test on the abrasive Monteblanco circuit near Seville in southern Spain, the speed of turn was very good and the edge grip more than handy for a fast-group rider. 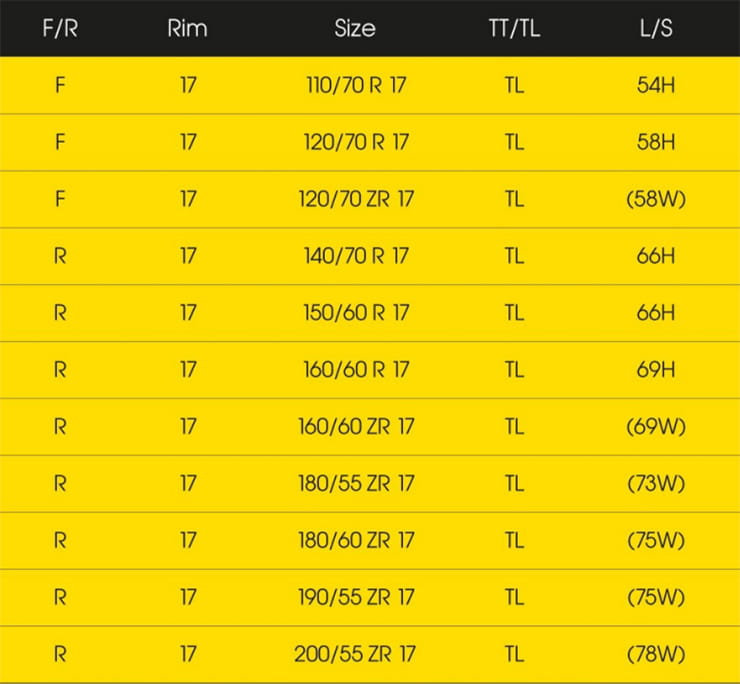 The range of 17”-only fittings are all available now and cover three front and eight rear sizes for an assortment of bikes including the junior sportsbike category, such as the A2 friendly Supersports 300 class, as well as roadsters, sports tourers and supernakeds plus the superbike category. 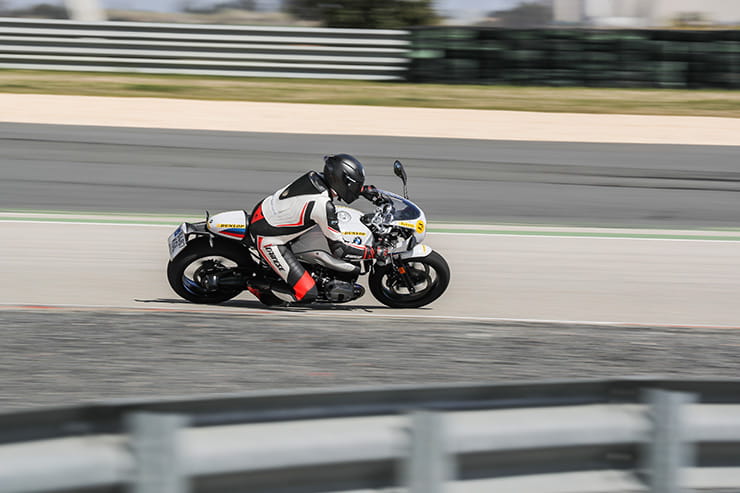 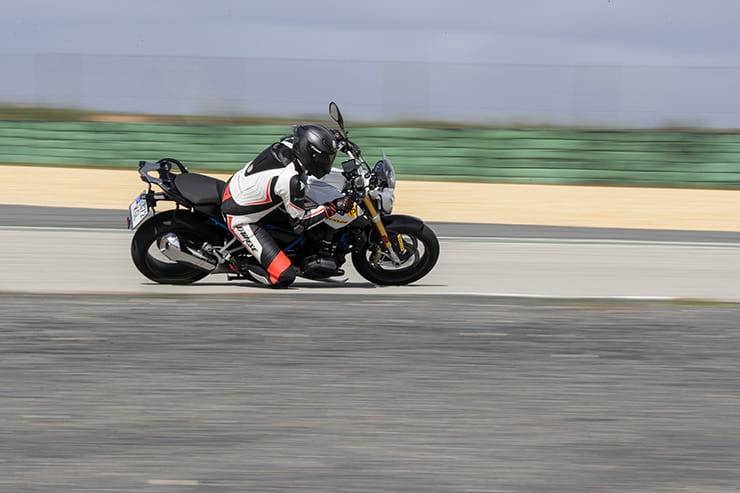 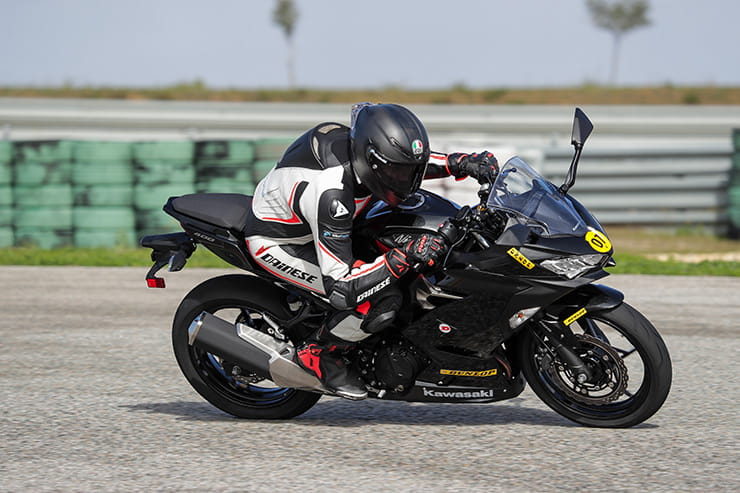 “No tyre warmers are required”, said Dunlop. And that was despite the early morning damp conditions taking a while to disappear. First up was a short 1-mile anti-clockwise inner circuit with fast third gear corners, a couple of sharper hairpins and one hard braking zone. Ideal for the new-for-2018 Ninja 400 and its 45bhp. I tried two bikes; one with the 140/70 R17 and another with the 150 version which was much more effective on track, allowing for faster apexes, sharper turning and more stability under braking. After two 15-minute sessions on a set of tyres that had been scrubbed-in and mine were looking nicely worn with graining all the way to the edge proving how I’d been able to use them to their capacity and yet felt safe, secure and worry free. 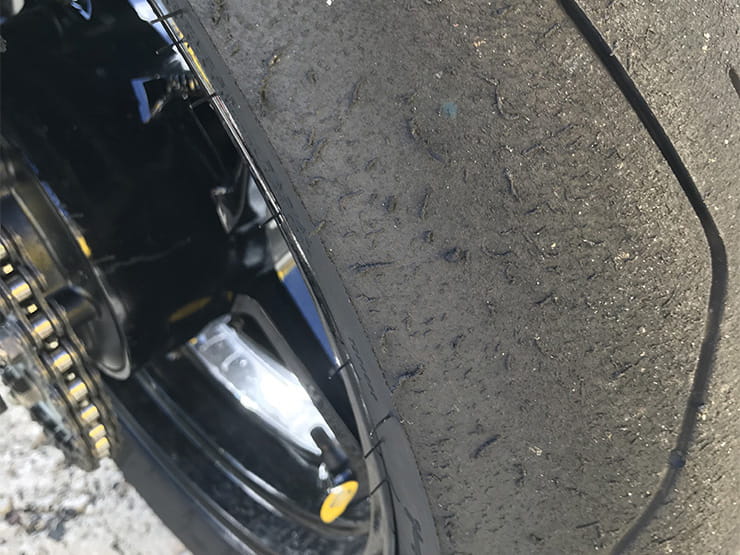 Above: After 2 x 15-minute sessions, the Kawasaki’s tyres were run in nicely

Onto the full circuit which is suitable for such a test with a flat-out, top gear straight, good for around 180mph into a first gear uphill right-hander which then opens into a mid-throttle third gear long left up and over a crest. The circuit has a mix of fast and slow corners, hard braking zones and a selection of cambers too.

On the boxer twin BMW range, the tall, leggy R1200 duo were expected to be a little shaky when hard on the brakes but the Dunlops did a sterling job at keeping the weight under control and the bike pointed in the right direction. The same can be said for the vastly sportier YZF-R1. The turn-in is quick, steering is light and the tyres were more than a match in the traction control fight especially coming out of the final corner when I was eager to get the bike’s 200bhp laid down.

Neatly progressive in the turn-in into and pick-up out of each corner, I quickly found the necessary confidence to push harder each lap.

The rubber remained calmer than the rider into a downhill 2nd gear right-hander as a stream of water ran across the track in that moment between the turn-in point and apex of the corner. As my confidence in the tyres grew I felt I could treat my attack of this particular corner just like any other. 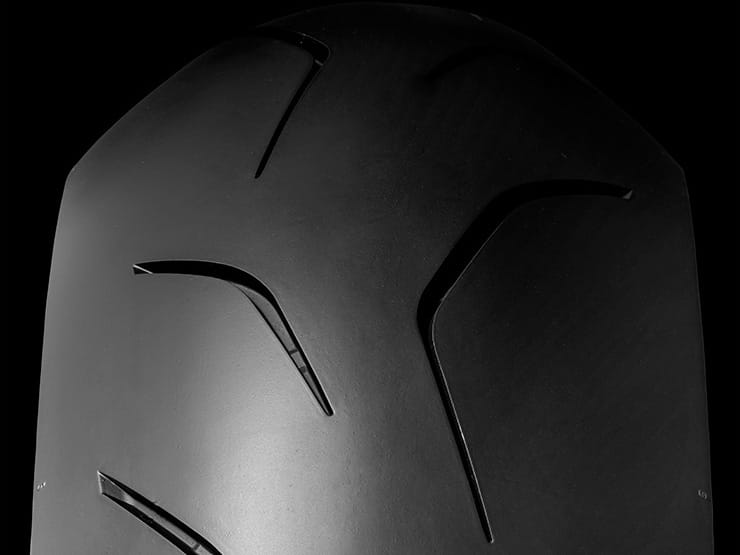 True enough the tyres were at their maximum operating temperature within half a lap of the Monteblanco circuit, a feat I thought was just marketing hyperbole. The more I learned before and during each track session, the more I could trust them. Only on one occasion when I got a bit too cocky on the R1200 RS’s throttle out of a second-gear right did the rear spin a little too much but the tyre found the grip before I could shut the throttle by even a couple of degrees. The new Dunlop’s impressed even on this abrasive surface.

Although I only had one session on a litre sportsbike, the feedback from the R1 was good enough to determine how good these road-legal tyres are – great lean angles with progressive and smooth turning. Soft enough to feel the bike yet sturdy enough to remain stable into, through and out of a turn.

Dunlop’s test riders, including a certain David Checa, the former FIM Endurance and French Superbike World Champion had completed 160 laps on one set of rubber in the days leading up to our arrival in Spain and the rear didn’t need changing so we were told. Unfortunately, that tyre wasn’t available for us to see.

Just one 15-minute track session (thanks to the weather) was not enough to adjudicate the tyre’s consistency on a high power sportsbike, nor to assess the longevity of the set of tyres. Did it boost performance? Again, only a back-to-back test against the clock with the Yamaha’s OE tyre would prove that but I would be prepared to bet actual money on a SportSmart TT victory in that race.

The R1 had been scrubbed-in and then used by an Italian journalist before me so hadn’t exactly had a strenuous life. On inspection after my session, the front was in fine shape and the rear looked good too; worn to the edge and showing a little graining yet demonstrating that it’d good for many more sessions to come – it would have been interesting to note if and how the performance consistency would have changed.

As a versatile set of road-legal rubber that offer excellent levels of track performance for the non-professional rider, the new Dunlops would be a superb choice in a competitive field of three alongside rivals of the Pirelli Diablo Rosso Corsa’s (and no doubt the forthcoming Diablo Rosso Corsa 2’s) or even the Michelin Power RS. I would trust the Michelin’s more in the wet but Dunlop’s more on the track though the performance levels would be close, while we’ll be testing the new Pirelli’s next month so look out for updates.

Only a more extensive test would offer feedback on how well they wear in everyday use but I have a feeling I’d be looking for a replacement set after 2,000 miles and a couple of track days.

For UK use, I’d be wary of the wet performance too but ultimately the SportSmart TT tyres have been designed for aggressive road riding and track use in mind with their excellent dry grip, warming up speed and clever lower PSI requirements. Technology is moving on quickly in motorcycling, not only with electronics and bhp but the important bits that keep you upright too.