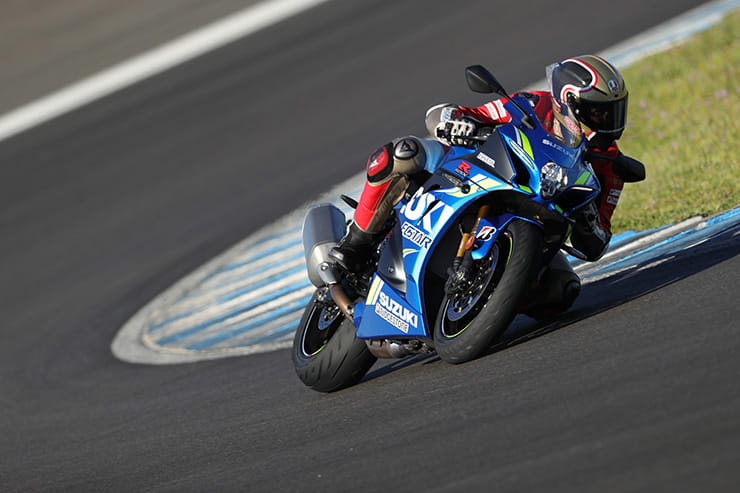 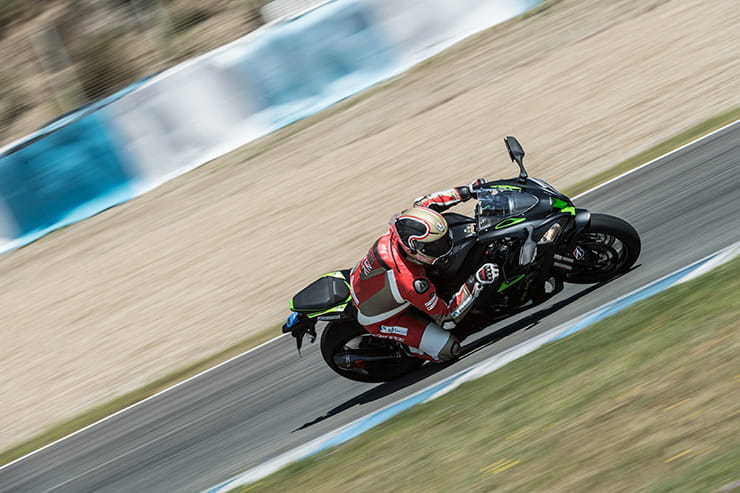 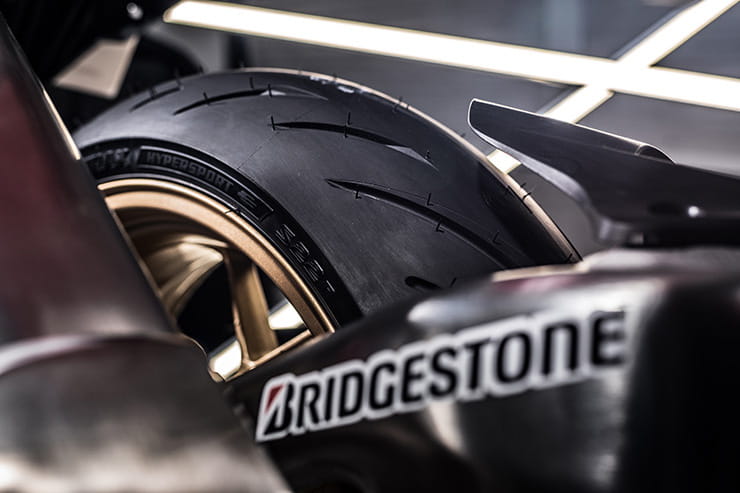 Did you know what the ‘S’ as in ‘S22’ stands for? Yep, Sport. And that gives you an inkling into what the intended audience is for the all-new Bridgestone Battlax Hypersport S22, slotting into the firm’s line-up in between RS10 and S21 as a road-based tyre that will handle the stresses of circuit use too. The S21 was widely acclaimed as a highly competitive all-around top notch tyre, so how does the all-new version scrub up?

This is one of Bridgestone’s four new tyres for 2019 to complement the five new sets of rubber for 2018. So, what happened when the press launch took place at Jerez – a 2.8-mile Grand Prix standard ribbon of beautifully smooth tarmac deep in Southern Spain? 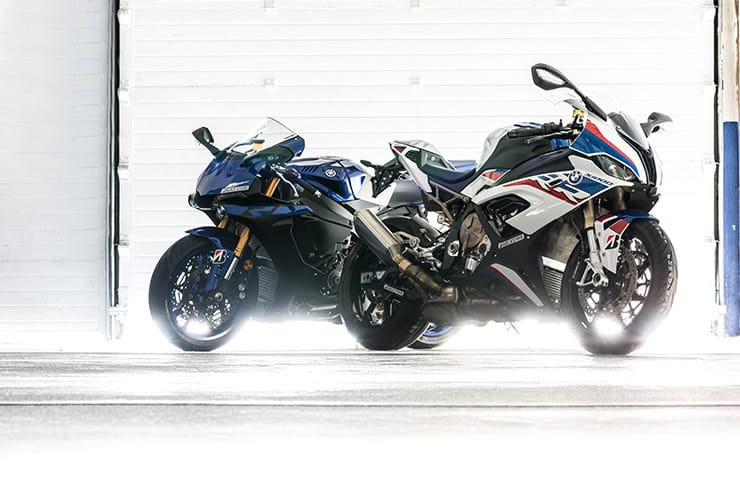 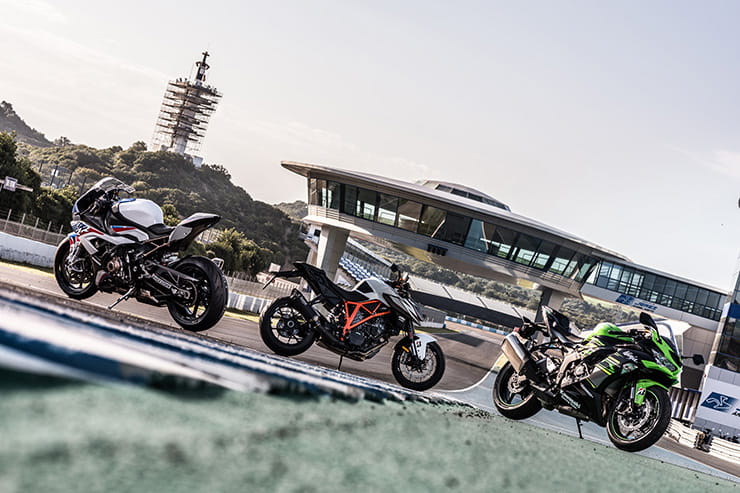 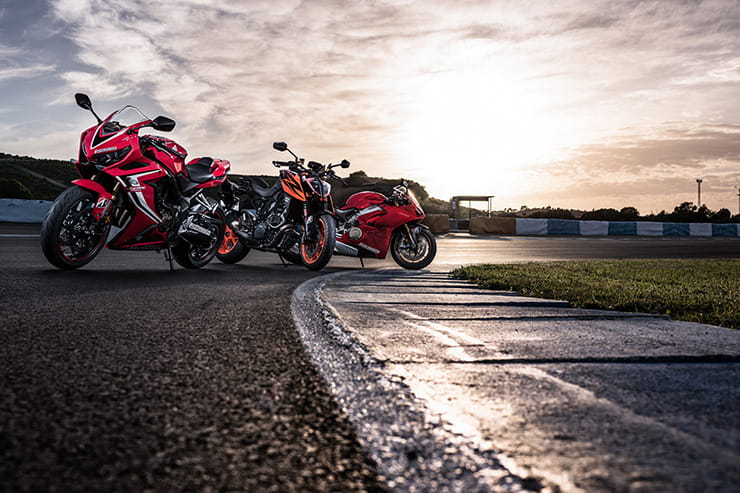 This tyre is all about being faster, lighter and better... in line with modern day hypersport bikes, with improvements to both wet grip and cornering performance. With plenty more power, torque and electronic aid on offer in modern day performance bikes the pressure and forces exerted on the tyres, particularly on track, are like never before. Advanced traction control settings allow the rider to maximise throttle use in fast corners and when driving out of the slower turns such as the last corner at Jerez, onto the start/finish straight.

Top spec sports bikes, naked bikes with vast quantities of bhp plus the mid-capacity sports machines are all going to enjoy having a fresh set of S22 boots. 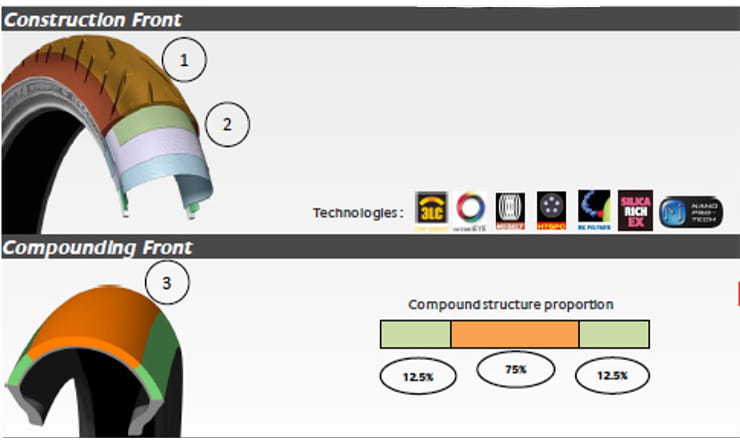 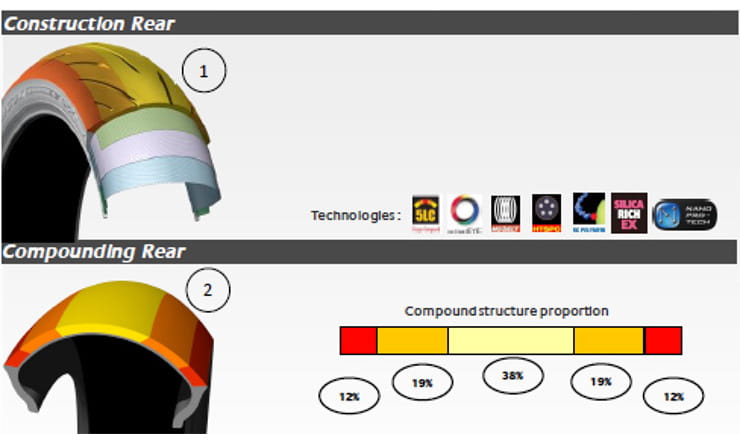 An increased land-to-sea ratio (tread to grooves) on the shoulder of the S22 compared to the S21 has, when tested, improved the wet performance with a 5% better lap time, measured on a BMW S1000RR around Autopolis in Japan. But it’s the cornering speed in the dry compared to its predecessor where the impression is made; a 15% increase is astounding, and that has contributed to a dry lap time improvement of 1.2% all while not sacrificing the wear on the tyres. Of course, in some eyes these are just manufacturer claims but the fact is they cannot be claimed without being accurately measured. So it was the same rider using the same bike in the same conditions on the same day.

As with many sports performance tyres suitable for road use, a harder compound is used in the central band of the tyre for optimal durability while softer compounds are used either side towards the edge of the tyre primed for grip when the bike is at lean. There are two compounds used on the front tyre over three bands but three on the rear spread over five bands (two of these compounds are new), due to its comparable width and because of the power it has to cope with when the throttle is opened at lean. Think about it, when bringing the bike up when exiting a corner you don’t wait until the bike is fully upright before getting on the gas. That central band in the S22 uses 25% more silica - the molecules that increase contact with the road surface and water dispersion. 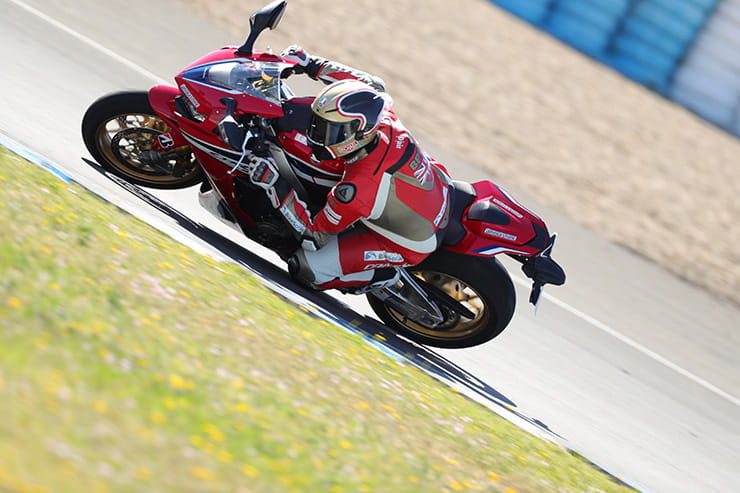 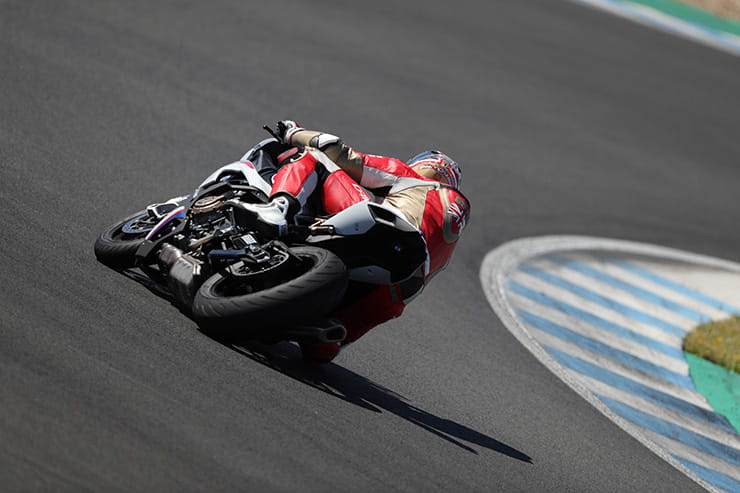 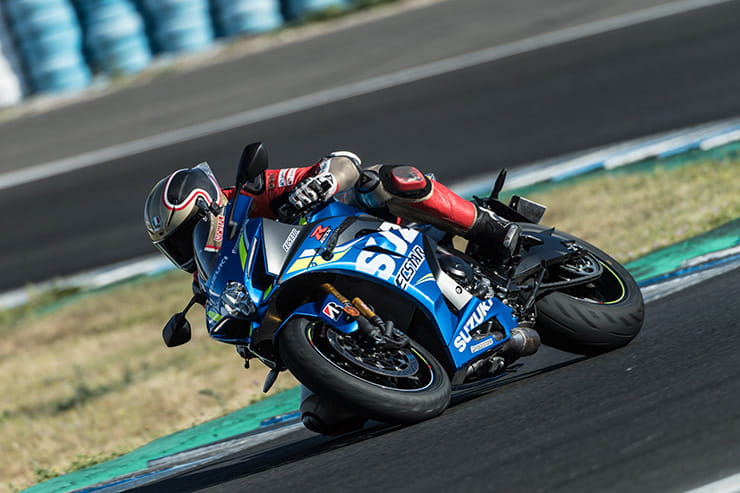 The Bridgestone S22’s have been in dealerships since January 2019 in one front size and five rear, all to fit 17” rims. But in January 2020, the firm will also have another front and to more rears to fit the smaller capacity sports bike, plus a Ducati-sized rear. 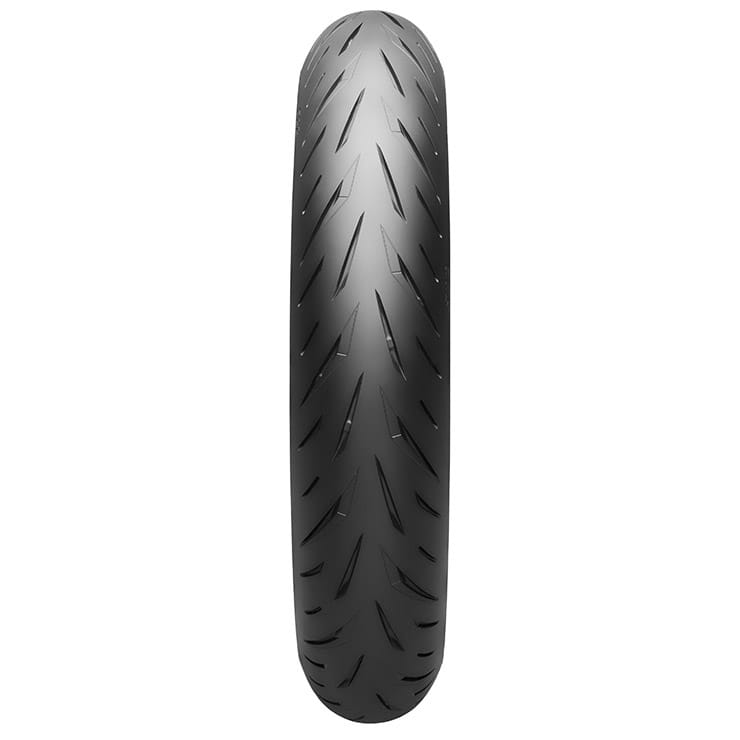 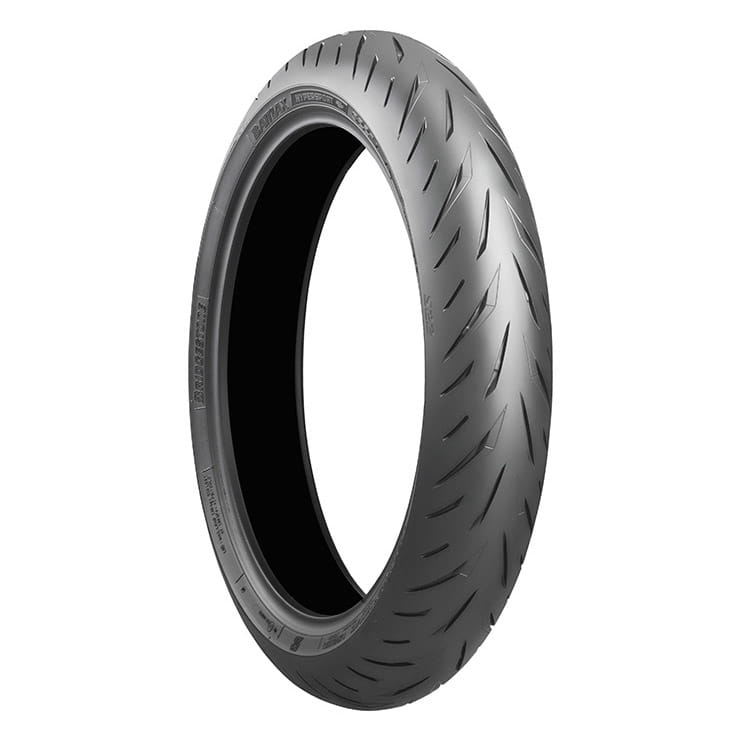 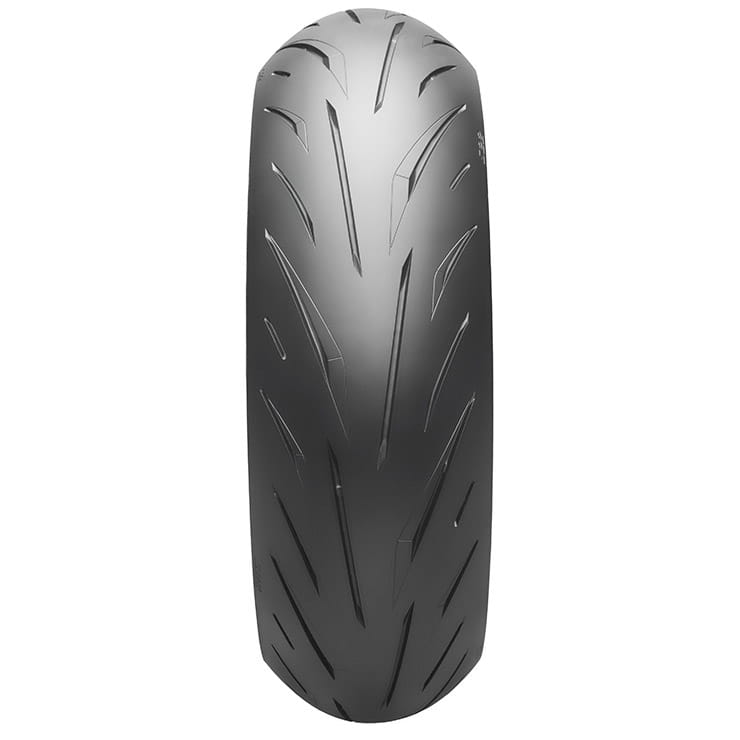 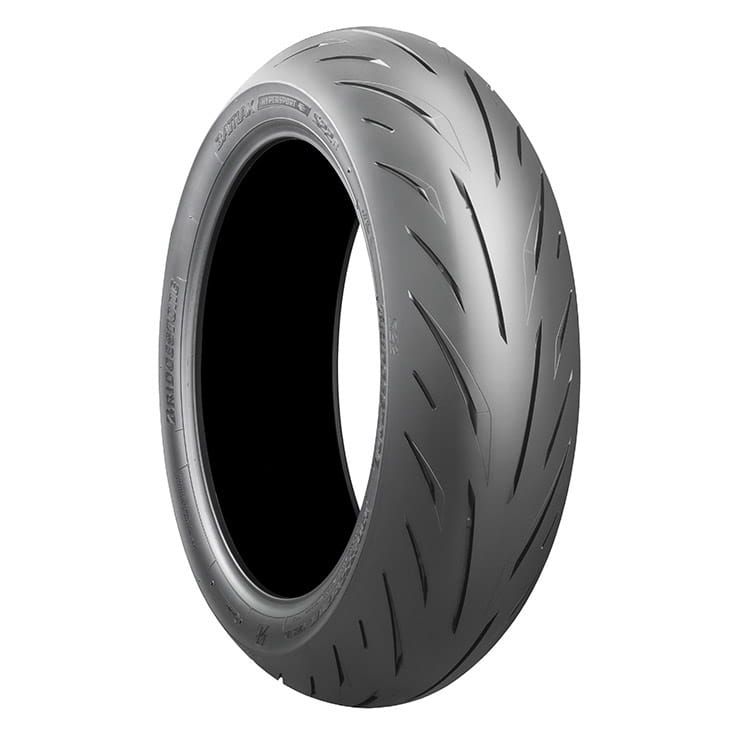 A tantalising selection of sports bikes of varying capacities lay in wait in the pit lane at Jerez including Honda’s 2018 and 2019 Fireblade SP, the new BMW S1000RR, Ducati Panigale V4S, Suzuki GSX-R1000R and Kawasaki ZX-10R plus nakeds and smaller capacity bikes in the shape of the KTM Super Duke 1290, Suzuki GSX-S1000, Kawasaki ZX-6R and Honda CBR650R.

Racing royalty in the shape of Colin Edwards and Josh Brookes were on hand to run the tyres in and act as guides. The track temperature for the first session was just 10 degrees, which is fairly representative of a morning ride in the UK. I hopped on the big Suzuki, set traction control to number 3 or 10 and flicked the engine mode into ‘A’ for the most instant of throttle maps. The Suzuki is a smooth operator and I was planning on being gentle enough for the first handful of laps of this, the first of the six sessions, because the track was completely new to me and we’d be warned about a damp turn nine. However, by turn five, the long and blind right-hander leading onto the back straight, on the first lap I had enough confidence in the tyre temperature to get the bike banked over and get my knee down. It had impressed already. As the laps ticked by and my circuit knowledge increased I began pushing the front into the second-gear right-hander at the end of the back straight (turn six) while still on the brakes. The bike and tyres stood firm. Even the long and fast third-gear left at turn four (the one where you see MotoGP riders smoking their rear tyres) began to coax me in, to pitch the S22 against the traction control.

I came in and asked Bridgestone Europe’s Product Planning Manager, Fabian Francois, about the pressures, “2.4 bar in the front and 2 bar in the rear; we’ve lowered them slightly because of the threat of over-heating… they’re street tyres after all,” he said with a grin. Oh, that’s 35psi and 29psi in UK money.

My second session was on the 2019 Honda CBR1000R Fireblade SP and the track had warmed up in the previous hour. What became noticeable is the impressive ability to turn quickly with the front and have faith in its ability in the faster corners.

As track temperatures increased and confidence in the tyres and grip levels of the circuit (which has only been resurfaced in December 2018), the ability to keep pushing more and more each lap and on each bike continued. The new BMW S1000RR (Race Pro 1 and traction on setting 3) is an incredibly impressive motorcycle. Because it has a set of electronics on par with NASA to look after you, it becomes an easy bike to ride and I was now setting sub-1m58s lap times – more than 2s per lap faster than the ZX-10R by the way. The bike and tyres gelled like Morecombe and Wise giving me confidence with cornering stability and speed, comfort and faith when braking while steering quickly and effectively, even turning tighter mid-corner if I needed.

On the KTM Super Duke 1290 for session four, I’d set the traction to ‘3’ deliberately. I’d earlier witnessed tearing on the shoulder of the rear tyre of the Austrian bike after just a couple of sessions which the technicians put down to the amount of torque crossed with the traction control interference from the powerful twin-cylinder naked. At this stage of the day, after lunch, the KTM had be re-shod just like every other bike. Most had completed nine sessions. I needn’t have been concerned because just like every other lap I completed during the day, the tyres gave me the performance I needed to achieve a lap time within 3s of the ZX-10R. 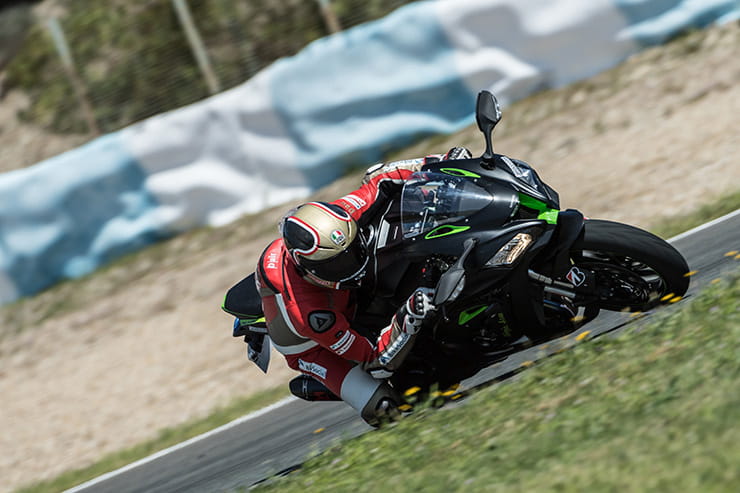 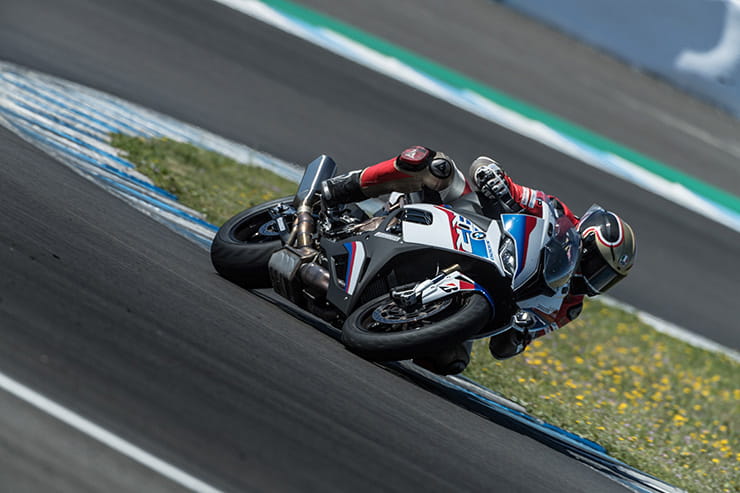 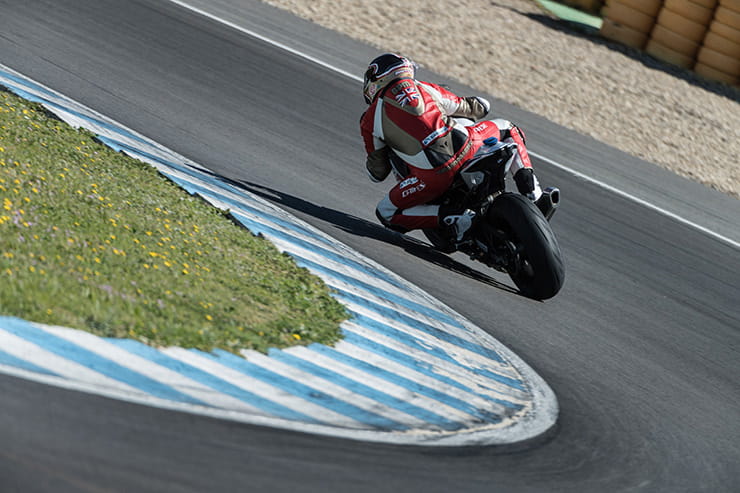 As a versatile set of road-legal rubber that offer excellent levels of track performance for the non-professional rider, the new Bridgestone’s would be a superb choice in a very competitive field alongside the Metzeler M7 Sportec RR, Pirelli Diablo Rosso II, Dunlop SportSmart Mk3, Continental SportAttack 3 and Michelin Power RS.

According to Bridgestone’s homework, the S22 will have an identical wear life as the S21 despite those enhancements with grip. Only a more extensive test would offer feedback on how well they wear in everyday use and even stack up to the enhanced wet grip claims but on first impressions and considering they are theoretically a road-based tyre, Bridgestone can be very proud of their S22-shaped achievements. An aggressive ride to the track followed by 6 sessions and home again on the same set will never have felt so good and if the tyre performs this well on the circuit then it’ll exceed any rider’s performance expectations on the road.

Technology is moving quickly in motorcycling and if you’re building a new litre sports-bike then you wouldn’t think about power figures of sub-200bhp these days, yet it’s worth spending the right money on those important two bits of rubber bits that keep you upright too.