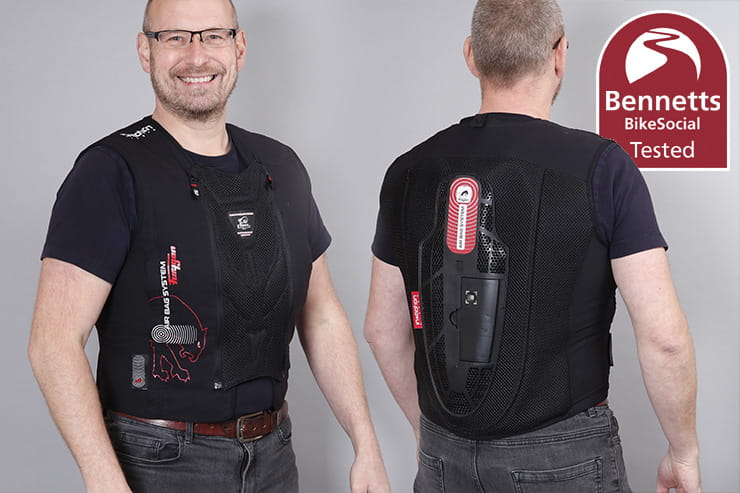 The Furygan Fury Airbag system on review here was originally sold to be fitted into Furygan’s own compatible leathers, jackets and textiles. Combining the In&Motion airbag system that’s also shared by Ixon, RST and Held, it’s a completely self-contained, electronically-controlled safety system that deploys when it determines the rider is crashing.

The recent launch of the Furygan Chest Connector Pocket means the system can now also be used as a stand-alone vest under almost any other textile or leather jacket, regardless of brand. That pocket – which retails at £36.99, is now included with all new purchases of the Fury Airbag vest, while anyone who’s already bought the vest from an authorised Furygan dealer can get the connector for free. 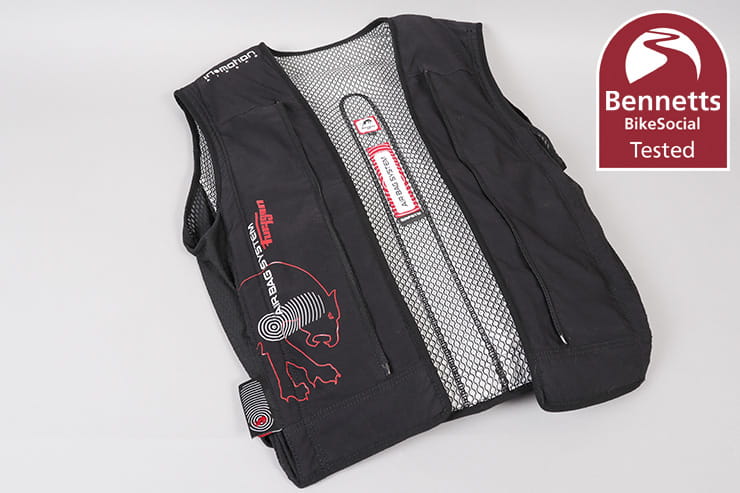 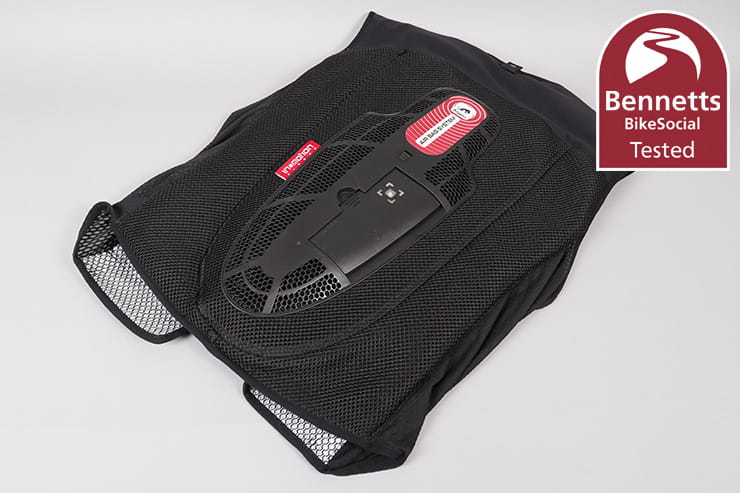 Put simply, all products featuring the In&Motion-based system have the same airbag installed, covering the back, shoulders/neck and the chest, and all use the same control box. All that differs is how the product is fitted into the companies’ garments.

It’s important to understand that the £379.99 retail price of this vest (and any other brands’ products) includes a control box, but it won’t operate until you activate it with an additional subscription, which costs £120/year, or £12/month. Alternatively, you can pay £399 to own the box outright, but you won’t benefit from the promise of new hardware if there’s ever a fault, or an upgrade if a new version is released after three years. Don’t be put off just yet – it sounds a lot, but stick with it... To fully understand the In&Motion system, read our in-depth review of the technology here. 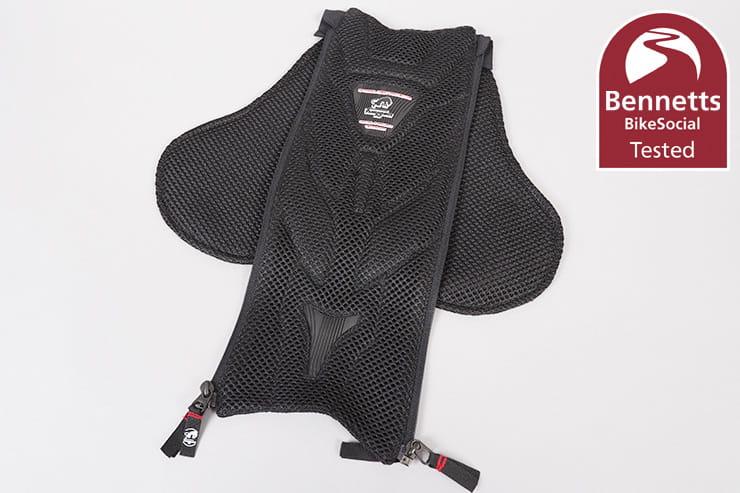 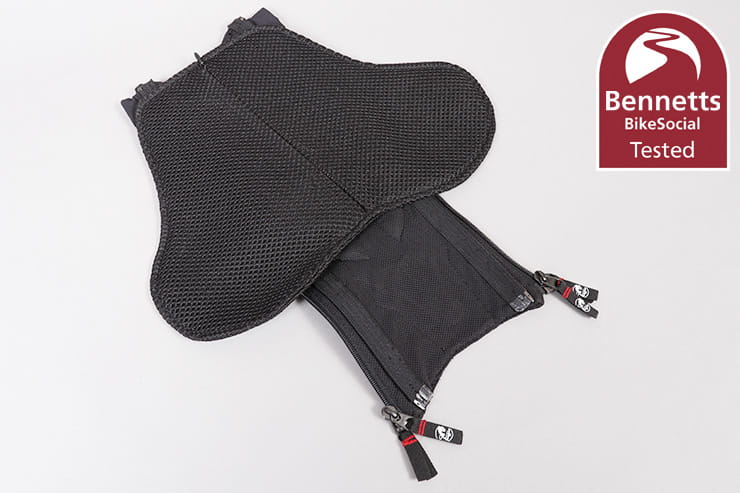 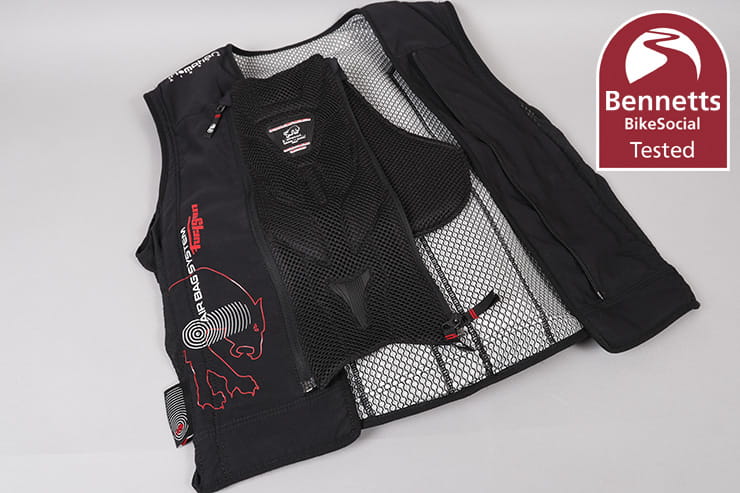 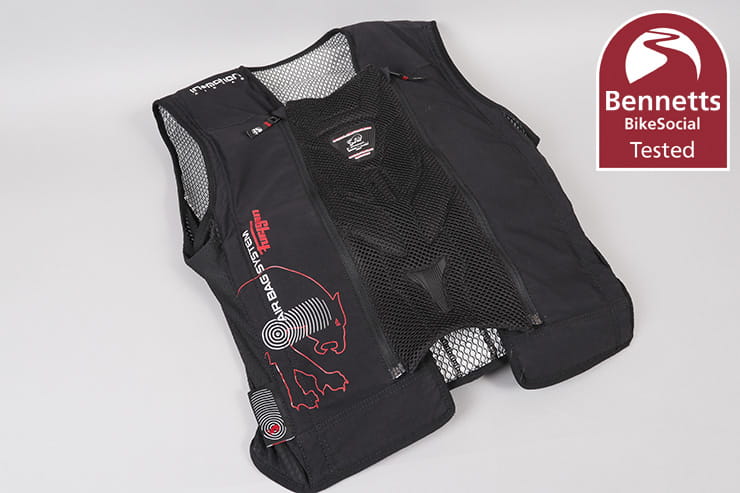 The chest connector pocket, which comes free with the vest, turns it into a standalone garment

As a brief insight, Ixon worked in partnership with In&Motion to originally develop this completely stand-alone airbag system; Ixon’s sponsored racers Bradley Smith and Aleix Espargaro wore development systems to build up a data-set on track, while the company also sent out 500 vests to road riders across Europe. All of the gathered data has helped to develop the algorithms that control the airbag’s deployment, but it’s also ongoing – every time the control box is plugged in to charge, it connects to the owner’s WiFi and sends usage data back to In&Motion, resulting in further refinement of the software that analyses the information from the built-in sensors. By March 2020, the system was already based on almost 7.5 million miles of data. 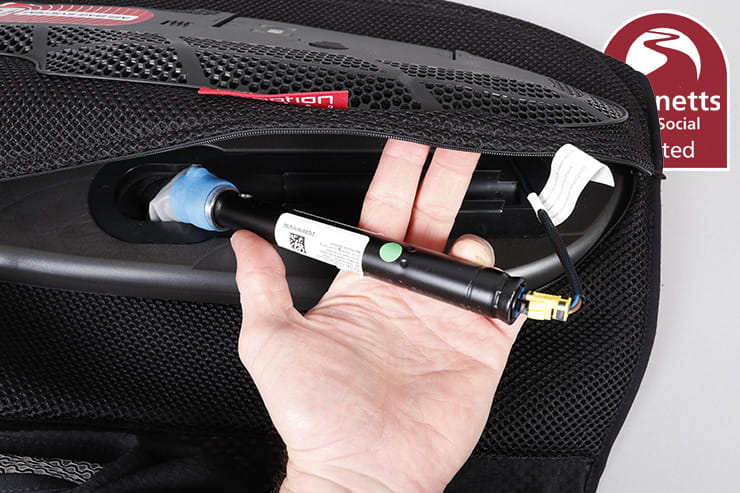 Its work with In&Motion meant that Ixon had the exclusive rights to produce a stand-alone airbag vest, but that deal left the door open to In&Motion to also sell it to RST as a permanently-fixed part of the garment, to Held as a clip-in system compatible with certain Held products, and to Furygan as a zip-in system for Furygan’s specially-designed products.

But now Furygan has developed a pocket system to hold optional D3O chest armour, which also just happens to turn the zip-in extra into a stand-alone vest that can be worn with pretty much any textile jacket or trousers – like the Ixon.

It’s not advised to wear an airbag vest under tight-fitting leathers that haven’t been designed to accommodate it when it inflates, and you’re also told not to use it with zipped-together jacket and trousers that could cause, well, a bad wedgie if there’s not enough space and it goes off. Common sense should be able to lead you here – I wear this system with everything from a Furygan Vince leather jacket and Hood jeans to Rukka textiles and pretty much anything else I’m testing, including my RST two-piece leathers.

Unlike some airbag systems, the In&Motion can be easily recharged by the owner by fitting a new cannister for £89.99, and the advantage of a zip-in or standalone system like this is that, if you do have a crash and damage your jacket, the vest is likely to be fine and can be reused once it’s got a new inflator in it. 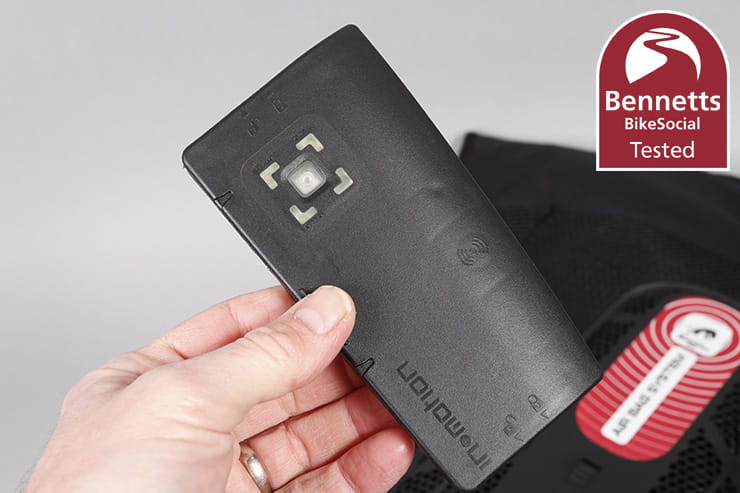 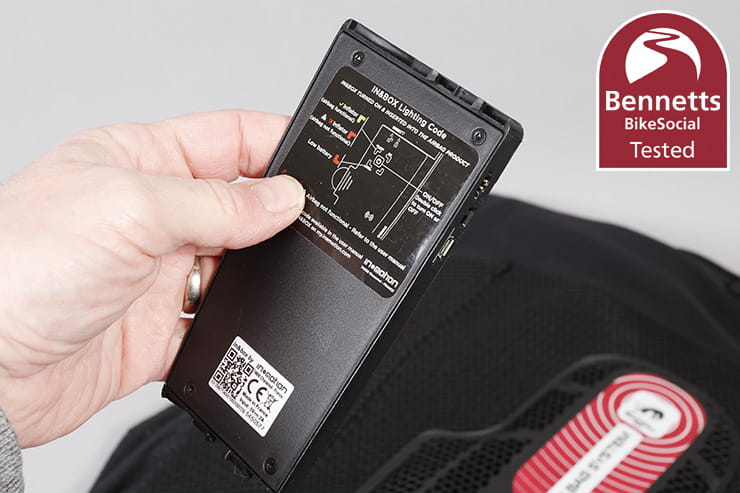 This is the In&Motion control box. It comes with the vest, but you need to pay extra to activate it

The In&Motion airbag system doesn’t require any form of tether to the motorcycle, be it mechanical or electronic. The control box – the brains of the unit, and what you have to pay the extra for – constantly monitors its sensors to determine if a crash is happening. If it does, it fires the inflator and gives the same protection as that worn by MotoGP riders… all in just 60 milliseconds. 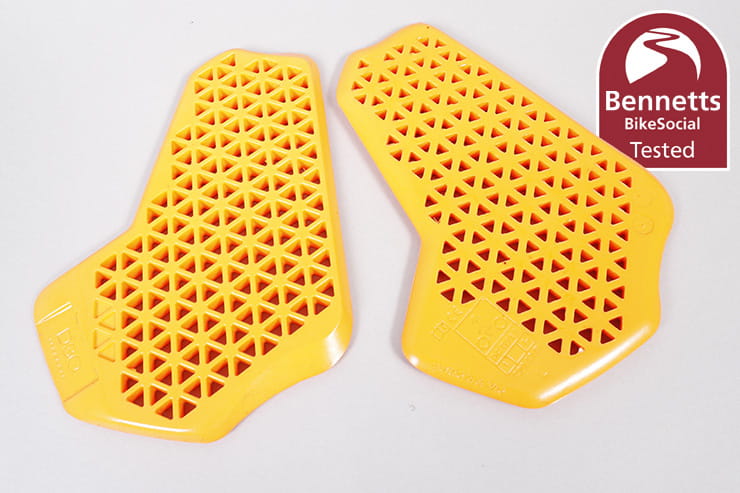 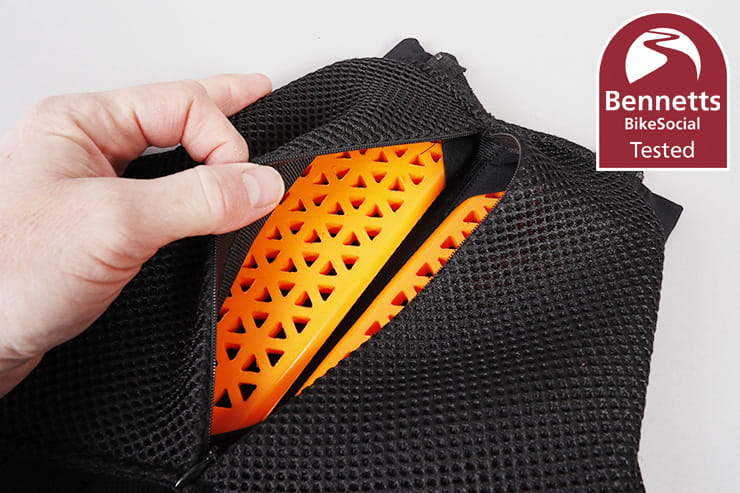 The optional chest armour fits into the connector pocket and gives additional, passive protection. Small tabs inside the pocket keep the armour in place

The Furygan Fury airbag vest is tested and approved as PPE in the form of an airbag, but like all the other versions, it has a CE Level 1 back protector as well; that means that, in the unlikely event that the system didn’t deploy, you still have protection running from the top of the spine to the lower back.

It’s the ability to add CE Level 1 D3O chest armour (for an extra £27.99) that makes the Fury vest unique among the In&Motion kit on the market. While the airbag will cover the back, neck and chest when inflated, the armour gives the bonus of additional passive protection that’s difficult to ignore. 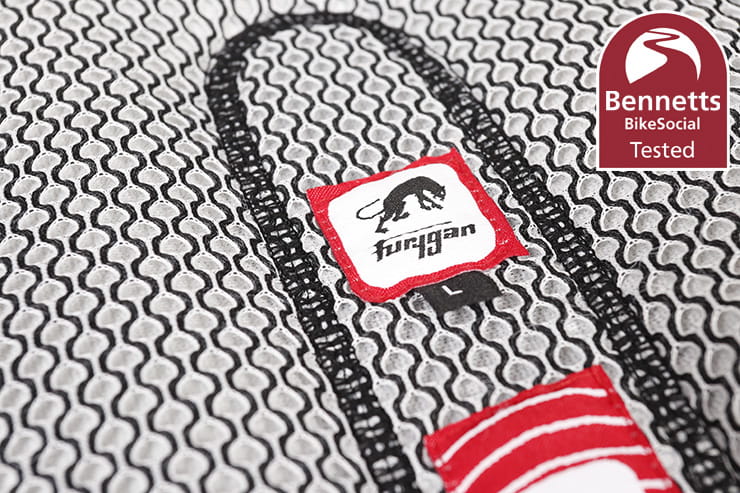 The 3D mesh inside the vest helps keep you cool

Comfort on and off the bike

Weighing 2.0kg with the optional chest armour, you’re adding to the bulk of your kit of course, but it’s the extra size that makes the bigger difference. Having said that, the back protector isn’t that much bulkier than a standard one, and the chest armour – if fitted – doesn’t add a huge amount.

The issue you could have is with the kit you wear it with. I haven’t found any issue tucking this – even with the chest armour – under my existing kit like a Segura leather jacket or Rukka textiles, but I would strongly recommend that you wear this when you try any new kit on.

If you have to go up a size, there’s a good chance the arms could be too long, or the jacket will be baggy elsewhere, which can cause tear and abrasion points in a slide, and lead to the elbow or shoulder armour moving around. A good fit is important with bike kit, so keep in mind that garments designed to have the airbag installed – like those from Furygan, which accept this vest, or Held with its own clip-in design, or indeed RST, which has the vest built into its products – will likely give a better fit.

As is the case on all In&Motion-equipped gear, the vest is completely lined with a 3D mesh that keeps air moving around your body. Needless to say, an airbag can’t be made breathable, but while this is adding layers, the mesh does an excellent job of helping prevent you overheating. 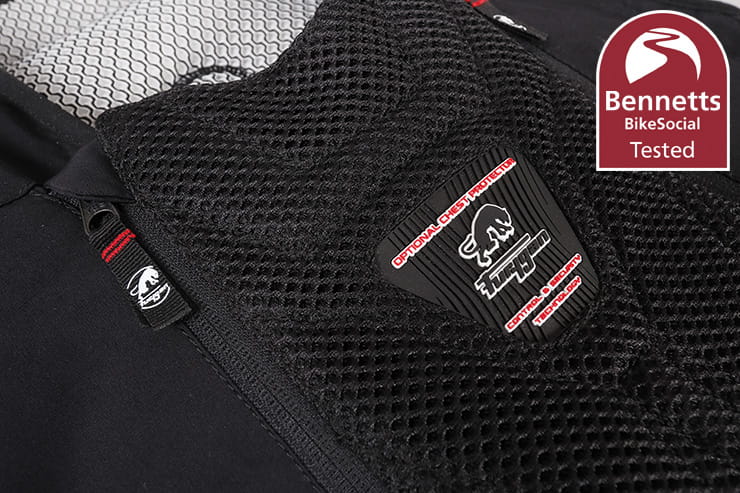 If you leave the vest in standby mode, as soon as you touch it it’ll wake up and be ready to use. It connects quickly to GPS, though it can work without it, and there really is nothing more to it.

Of course, leaving the device in standby does mean it’ll draw a little more power, though the biggest drain comes from anybody brushing past it and turning it on (it’ll shut itself down after a period of inactivity). I prefer to turn the box off, which is a simple double-tap of the button on the back; it’s habit now for me to turn it on whenever I pick it up.

This is also worth doing as the box only has a visual warning that power is getting low. Using the vest as a standalone item, you’ll hopefully notice the red LED glowing, but if you have the vest zipped into a Furygan jacket, you won’t know unless you peek inside, or check the app on your smartphone. The box has a sounder in it, so I really hope that In&Motion releases a firmware update that makes the box give out one tone for ‘battery good’ and a different one for ‘battery low’ when it starts up.

While the vest does zip into a lot of different Furygan kit, there’s little obvious reason to do that – it’s so much more convenient to use it as a standalone vest, be that with Furygan gear or with any other brands. The only snag is that the design of the zips makes it a fraction more time-consuming to put this on than to simply zip up a jacket that it’s already installed into. But then again, getting to the control box to operate it and to remove it for charging is easier with it on its own.

My criticism with the Furygan Fury as a standalone vest is that the two zips connecting the chest pocket aren’t self-locking. It might seem a minor point, but it’s irritating to pick it up by the chest section (the natural place to grab it) and have it unzip itself. It’s also slightly more awkward to do the zip up (you’ll leave one closed), as you have to tuck the chest panel behind the body of the vest. 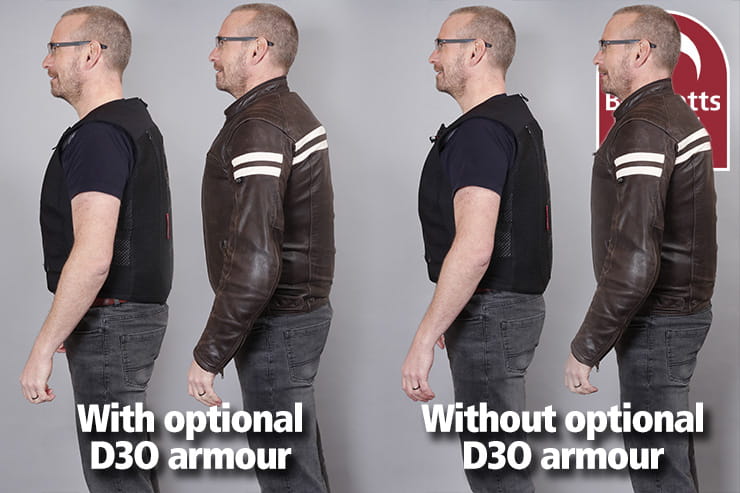 Any airbag vest will add bulk to your kit, so check the sizing, but it’s worth it for the significant extra safety

Anybody who wears a back protector will likely remember the first time they put one on and how they never wanted to ride without it afterwards. It’s the same with an airbag vest – I’ve been using the In&Motion tech for nearly a year and wouldn’t be without it.

The cost, at £10/month when paid annually, is significant, and it does annoy me a lot that In&Motion expects an additional £25/year to enable the track mode settings for closed-circuit riding, but I simply won’t go back now; I won’t ride without as airbag.

You do only need to subscribe once – if you have multiple airbag garments, the box will swap between them, and of course, a jacket designed for an airbag is going to fit better – and be potentially safer. That swapping works across brands too – I also have the RST Pro Series adventure suit, which has its own In&Motion airbag built in so I just pop the control box into it when I want.

Ultimately, having a standalone vest does open up more options for what you can wear it with, but is this better than the Ixon IX-U03, which is the same price?

If you’re looking for a standalone airbag vest, and you’re not interested in adding chest armour, then I’d suggest the Ixon is the better option as the zip closure is less fiddly and it’s an overall slightly less bulky design, thanks to the extra fasteners and padding on the Furygan.

But if you’re willing to spend an extra £27.99 on the D3O chest protectors, and you don’t mind the slight increase in bulk, the Furygan has the edge. It also of course has the advantage that it fits perfectly in all the Furygan products that are designed to have it zipped into, while having the ability to be worn on its own with other kit.

Like wearing a back protector, then moving on to an airbag and not wanting to go back, the extra security of chest protection is difficult to give up once you’ve tried it…