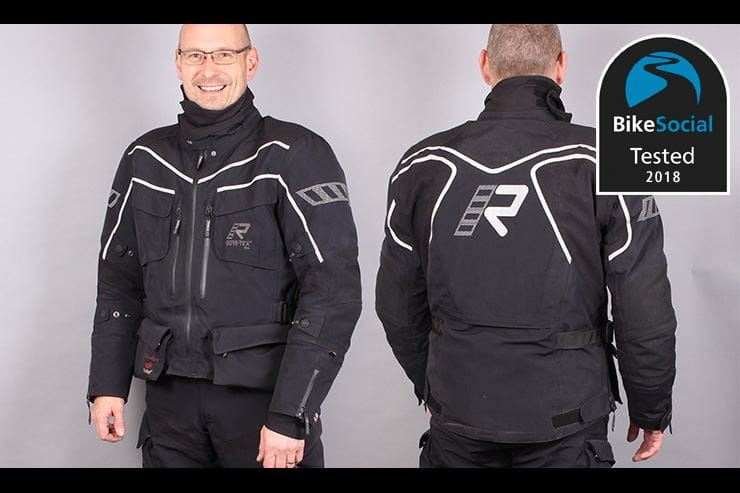 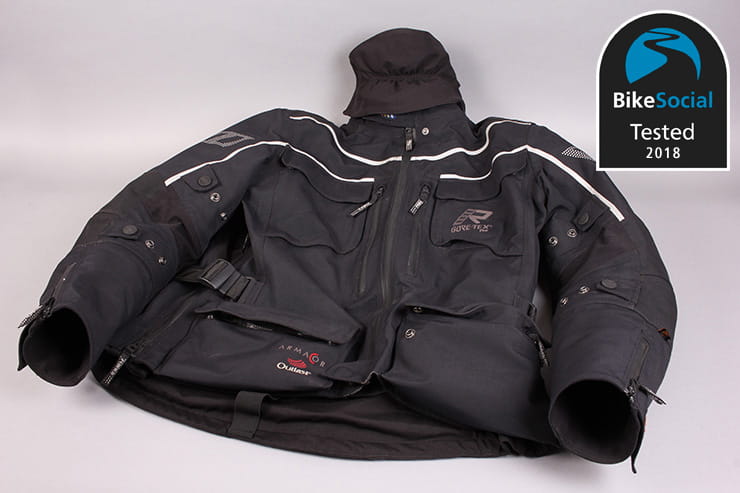 The Rukka Navigatorr is a laminated Gore-Tex motorcycle jacket with full armour and reflective graphics printed front and rear. I’ve been wearing it for six months now, in all weathers in the UK and Spain…

Laminated textile kit is renowned for being stiff to wear – a typical bike jacket has a ‘drop liner’, which means the waterproof membrane hangs separately, behind the garment’s outer shell. This uses a three-layer Gore-Tex Pro laminate construction, the ‘Pro’ being intended for extreme wet weather, and dictating the use of high quality materials for the outer shell. A laminate is more expensive to produce, and also requires fully bonded seams, which are trickier to construct, and hence more costly.

The Navigatorr was noticeably less flexible than drop-liner jackets I’ve used, but it did feel extremely tough, thanks also to the Kevlar/Cordura Armacor panels and very solid construction. However, after around a month of use it became a lot more compliant – it’s still stiffer than other kit, but certainly not uncomfortably so. I’ll walk around in it when off the bike, though like all textile kit it’s a bit bulkier than a day-to-day garment, mainly thanks to the armour.

A waist strap allows you to get a snug fit, as do the three-position bicep and forearm poppers, and there are elasticated sections running under the arms, around the back and inside the elbows, so you can move very freely. 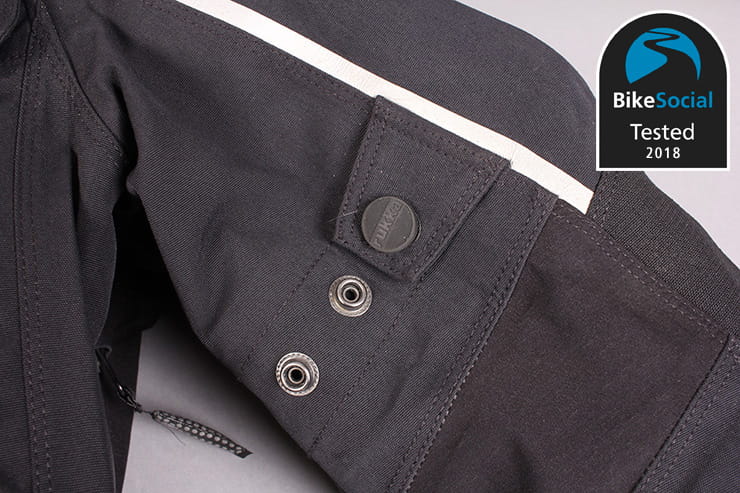 There are four pockets on the outside – the top two have a flap that folds over and secures with a pair of poppers, as do the bottom two, though these also include a water-resistant zip. The former shouldn’t be used for anything you don’t want to get wet, but the latter haven’t let any moisture in (though to work properly, you must close the zip and secure the poppers). There are also two zipped internal pockets. 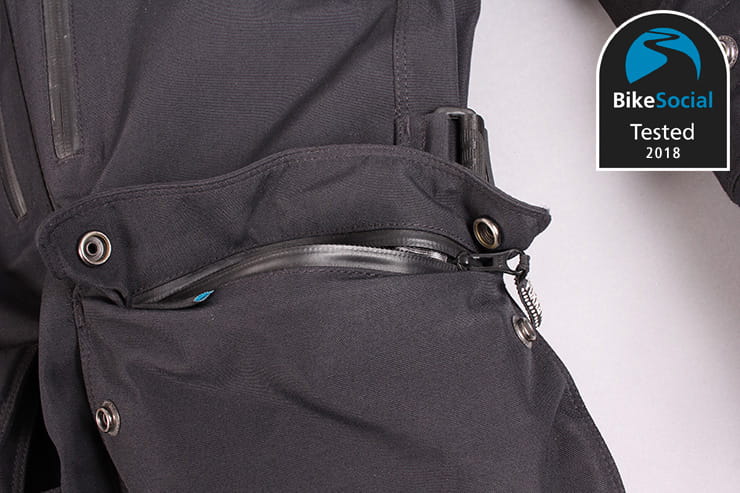 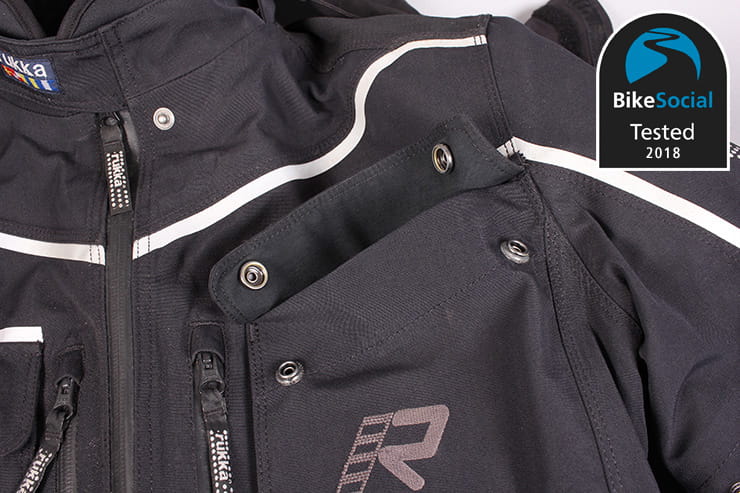 The main zip is water resistant – its rubbery coating makes it stiffer in use, and you might occasionally need to wipe it clean and run a little silicone over it (I haven’t had to yet), but it’s secure and never snags on the shell or lining. At the top is a Velcro flap, as well as a detachable collar.

This elastic Gore-Tex collar is brilliant – it’s well fitted to the jacket, and has a large enough Velcro patch to hold firmly when wrapped around your neck. It does a great job of stopping the wind and rain from driving down your back, and really makes for a more comfortable winter ride. Just don’t lose it if you take it off – it’s not available separately.

The cuffs are an absolute stroke of genius, an inner liner going under your gloves, while the outer shell fastens over the top. It’s always best to put your gloves under your jacket, as it stops the water running down your arms and into the glove (the main cause for people thinking their gloves are leaking), but this system goes a step further. It’s much easier to use than it sounds – just fold the outer cuffs back, pop on your gloves, then fold the cuffs over and zip them up. You can tighten them with Velcro flaps, and as all the zips have long fabric toggles on, they’re easy to use with winter gloves. I’ve used it with a variety of different gloves, and not had any problems at all.

If you use heated gloves, make sure you check how the cable will route under the inner cuff, then back and into your gloves. 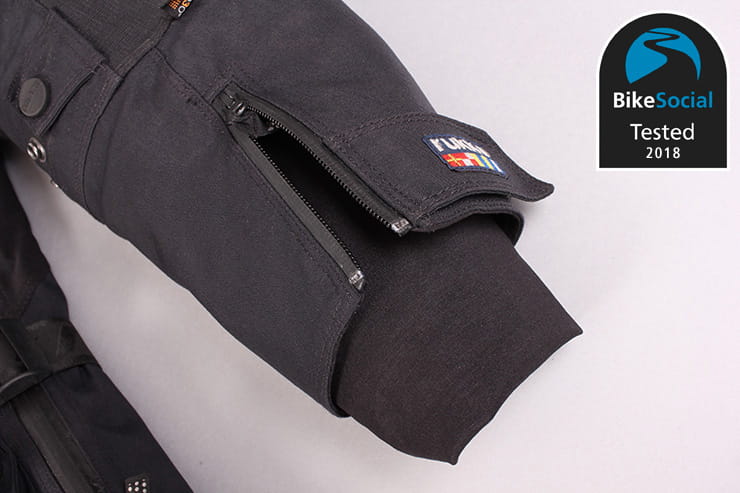 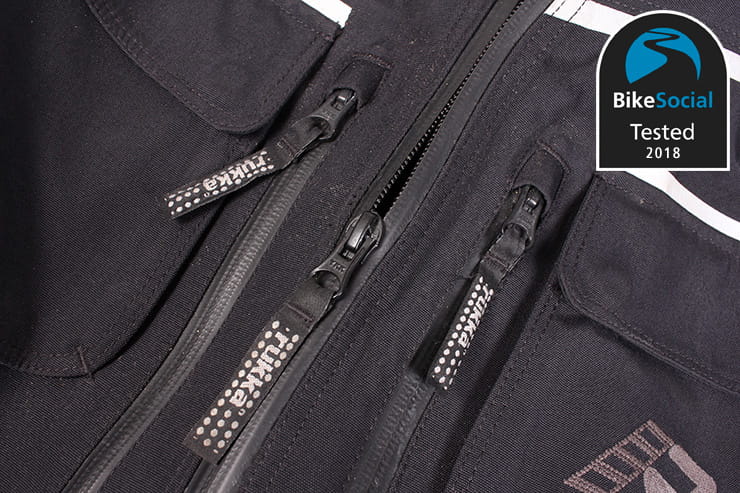 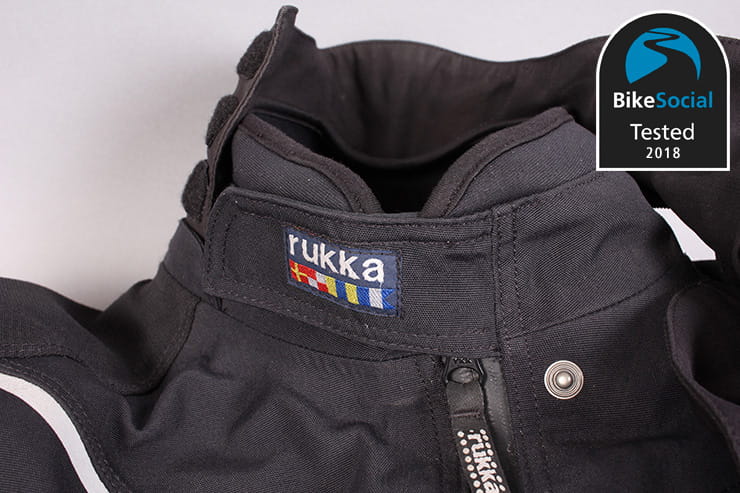 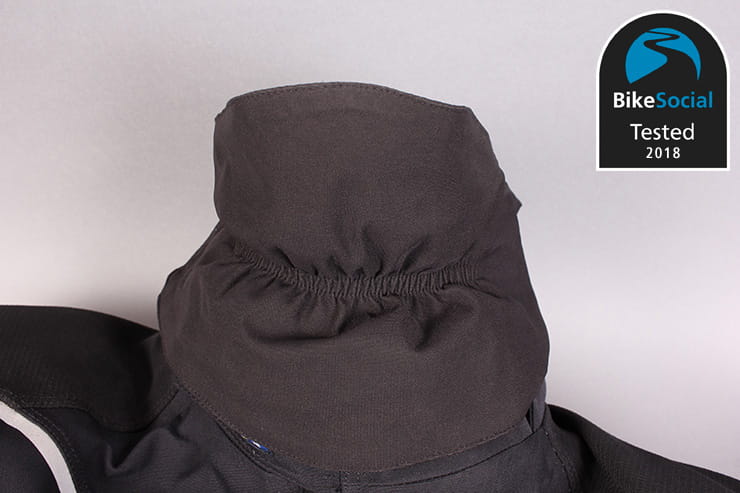 The Navigatorr is very windproof, so could feel stuffy in the summer, but there are a pair of long chest vents behind water-resistant zips, as well as one on either side, running from the armpits to the hem. They’re effective, though if wearing a large-fronted rucksack, like my Kriega R30, the chest vents can get covered up.

This is an all-season jacket, but the fact that it’s so good in the poorer weather means when things get really hot, it can be a little warmer than those with more vents. Of course, that makes it pretty much perfect for year-round riding in the UK, and even when I used it for riding off-road in Spain (not baking hot, but I was working hard), it was never uncomfortable.

If you’re only going to be riding in the baking heat, then consider something like the Rukka Forsair, which is an extremely breathable Cordura mesh. 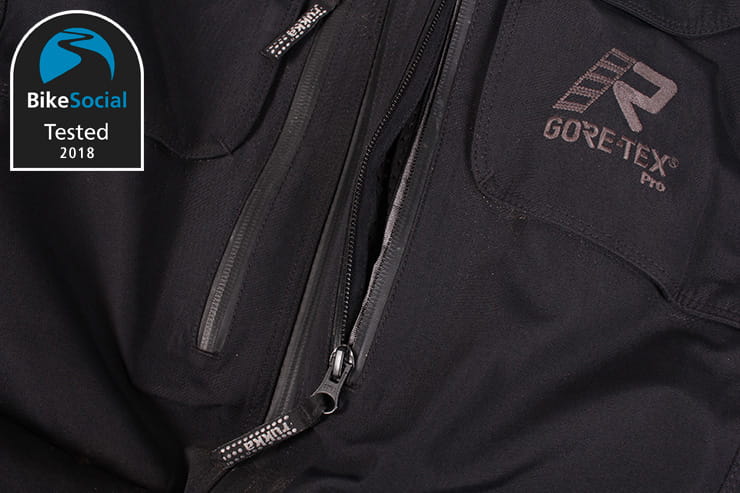 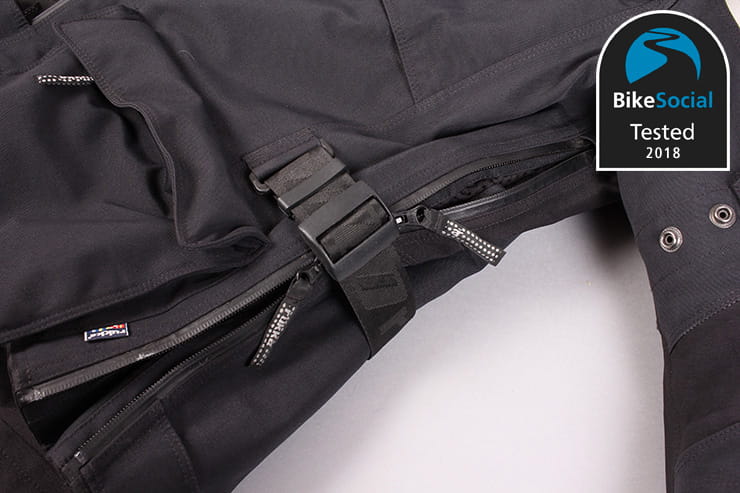 The liner (which has its own zipped pocket) is my only slight disappointment with the Navigatorr – before I’d broken the jacket in, the liner had a tendency to pull out at the arm. However, this has stopped since everything’s softened up, but I do still find it not to be the most plush liner. Also, if wearing a very large watch – like some G-Shocks – it can snag on the liner’s cuff, making it hard to get the jacket off.

It’s got a 60g insulation and Outlast core (which helps regulate your body temperature), but I’ve found that once I get too hot it’s still a bit ‘grabby’. Also, there’s about a one-inch gap at the front when it’s zipped into the main jacket – this is just enough when it’s really cold to leave you feeling very slightly chillier down the front.

Rukka’s pricing structure is very clever, with each model costing a little more than the one below it for some appealing extra features. The top-of-the-range Nivala, at £1319.99, has a separate 100g down/feather thermal liner (that can be worn on its own), as well as a CE-approved chest protector. While I’m really pleased with the Navigatorr, I’d perhaps consider trying to stretch the extra.

You can buy the ‘Down-X’ separately if you already have Rukka kit – it’s £171.99. As I tend to use a heated jacket, or a down jacket I already had, I rarely bother with the thermal liner, but consider when and where you plan to ride when buying – the chest protector of the higher model could be worth the extra £110. 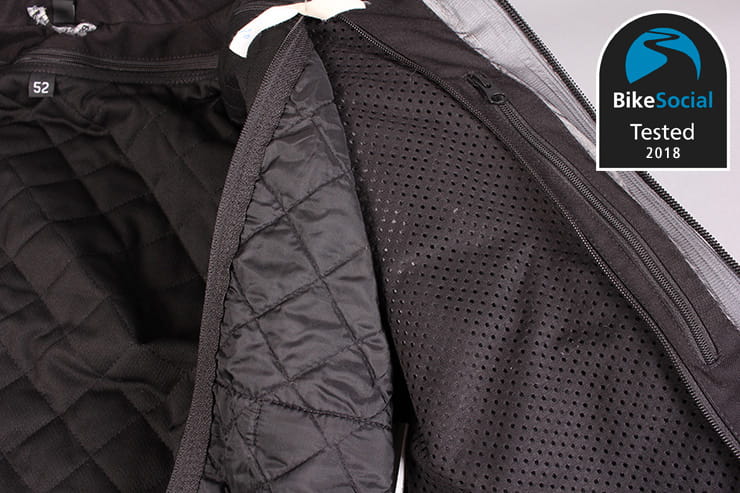 The Navigatorr is completely waterproof. It’s the driest jacket I’ve ever worn, thanks partly to the water-resistant main zip and effective storm flap, but of course mainly due to the laminated Gore-Tex liner.

All bike kit has a DWR (Durable Water Repellent) coating on the outer shell. This is applied in the factory, but it does wear off. You can buy products that claim to reapply it, but I’ve never found them to be as effective as the original. This DWR, by the way, is stripped off with detergent, so only ever use a tech wash on your waterproof bike kit.

On a jacket with a drop liner, once the DWR has given up, the outer shell will ‘wet out’, meaning it becomes saturated with water. Your drop liner should still keep that water from getting to your skin, but it won’t be able to breath, meaning you’ll get sweat and condensation building up, making you feel wet. Also, the outer shell will take a long time to dry – most years that I’ve ridden to Motorcycle Live, it’s rained, and even leaving my other jackets over a chair in the press office all day, I’d come back to them feeling heavy, wet and cold.

A quality laminated jacket effectively cures this as the water can be shaken off. After time, it will still take on some water, but nothing like as much as a non-laminated construction.

The D3O armour fitted to the Navigatorr is designed specifically for Rukka – it’s much larger than some others, and includes a back protector. It’s securely fitted inside, and hugs your limbs well, especially after you’ve adjusted the outside straps. 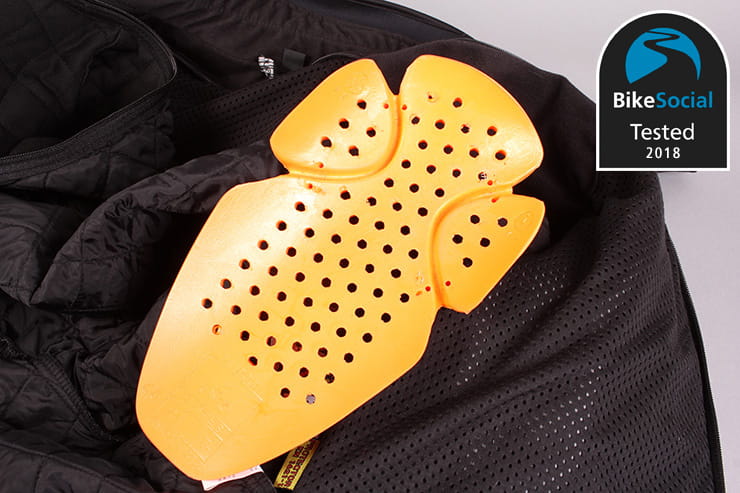 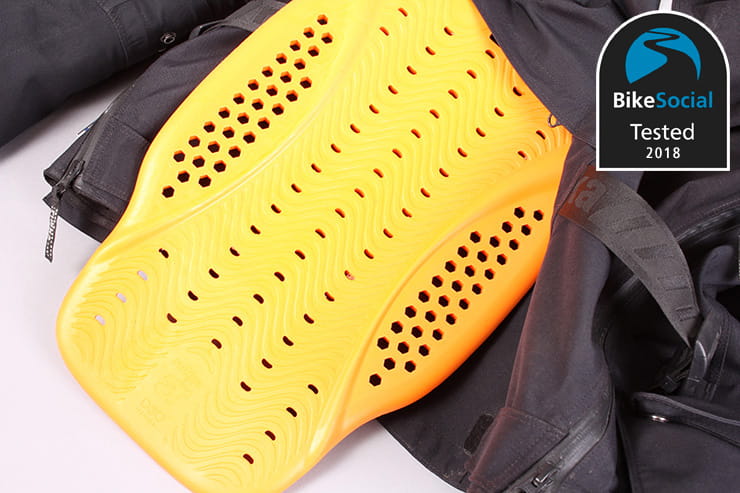 I’ve been a biker since 1996, and have been reviewing motorcycle kit since 1999. During that time I’ve always ridden all year round, and only have a car now for my family and dog. As a journalist I’ve bought a lot of my own motorcycle gear, but part of my job is testing kit, which does mean being given it for review. I would struggle to afford Rukka, but having used it, I now understand why it proves so popular with so many people.

This Rukka jacket is built to last, and has a six year warranty if purchased in the UK. Think of it as an investment; it’s expensive, but it’s extremely well made, well thought-out and incredibly protective. This is the closest I’ve got to the comfort of a car, without losing all the practicalities and fun of riding a bike.

Using Gore-Tex in a product means it has to be assessed by the Gore company before a licence is granted. The idea is that Gore will not allow its branding to be seen on what it considers a sub-standard product – if something proves ineffective or poorly made, they don’t want to be associated with it.