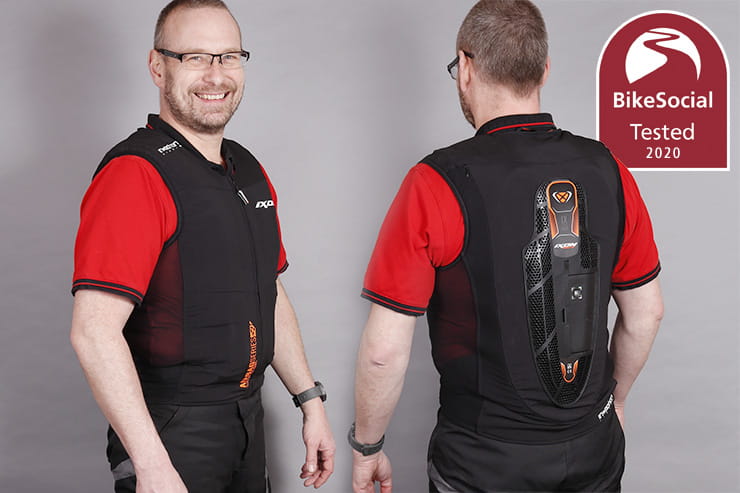 The Ixon airbag vest IX-U03 on review here is a completely self-contained, electronically-controlled airbag system that will work with pretty much any of your existing motorbike kit. It uses the In&Motion control box set into the back, which you can read more about here; in essence it’s a clever array of sensors that constantly monitor your ride, firing a gas inflator to protect your back, chest, collarbones, shoulders and neck in less than 60ms.

I’ve been wearing it under textile and leather kit since February on bikes including a BMW S1000XR, Kawasaki Versys 1000, Honda MSX125, Royal Enfield Interceptor and a 1999 Kawasaki ZX-6R… 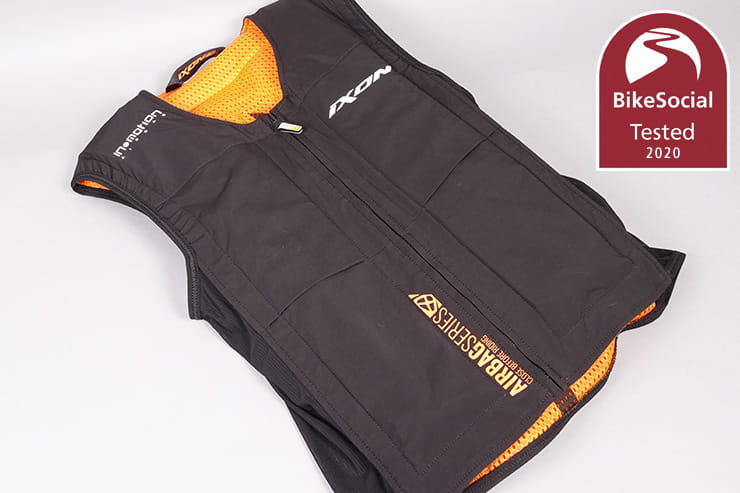 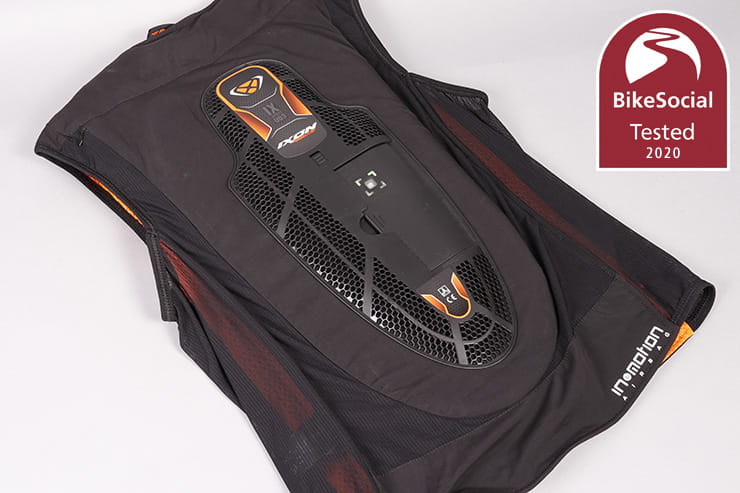 The Ixon airbag vest has no pockets as it’s designed to fit under your existing bike kit, but the design sees a back protector set into the vest, with the car-style inflator clipped into a recess, as well as the slot for the In&Motion box.

Should the vest be deployed, a new canister can be bought for £79.99, and it comes with an insert that allows you to test that the airbag itself is undamaged. While the idea is to have it inspected after three to five deployments (let’s hope none of us are crashing that often), tests have seen the bag survive more than 30 inflations without issue; as long as it’s not damaged by the road, it should remain useable. If you are involved in a crash, the kit your wearing could well get damaged and need repairing or replacing, but the Ixon vest will most likely be fine, ready to be used under your next gear. 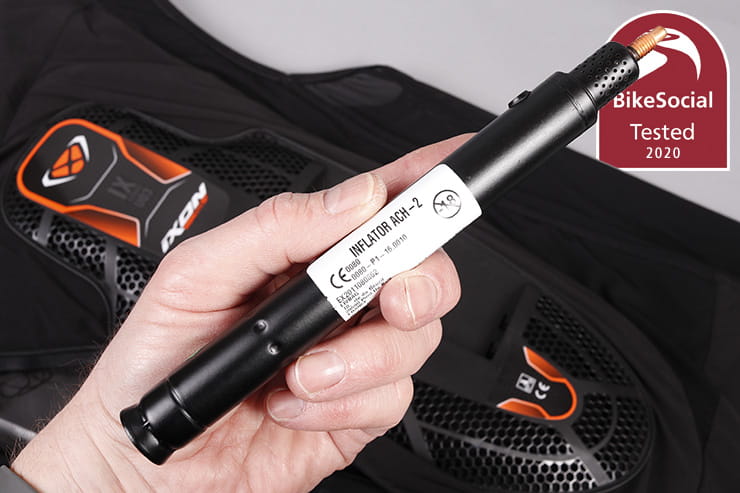 One big advantage this vest has over some other electronic versions available is that it’s user-serviceable; you don’t have to send it back to the manufacturer or a specialist and wait for it to be rebuilt – the Dainese D-Air Smart jacket for instance doesn’t support the neck, and costs £250 to be recharged.

While this vest is designed to be worn under your existing and future kit, Ixon does state that it shouldn’t be used under tight-fitting motorcycle leathers as the bag must have room to inflate; under most kit that wouldn’t be a problem but race leathers that are so snug you can’t stand up could be an issue; Ixon does sell its own leathers designed to accept the vest.

Another major advantage of the In&Motion platform is that one box will work with anything that supports it, so that means RST, Furygan and Held, with more to come.

Once you’ve bought this vest, you’ll still need to pay either £399 to buy the control box outright, or pay £120/year (or £12/month) to subscribe. I’ve separately reviewed the In&Motion control box here, so check out the full pricing structure, and get more details on the advantages and disadvantages of buying into this system. 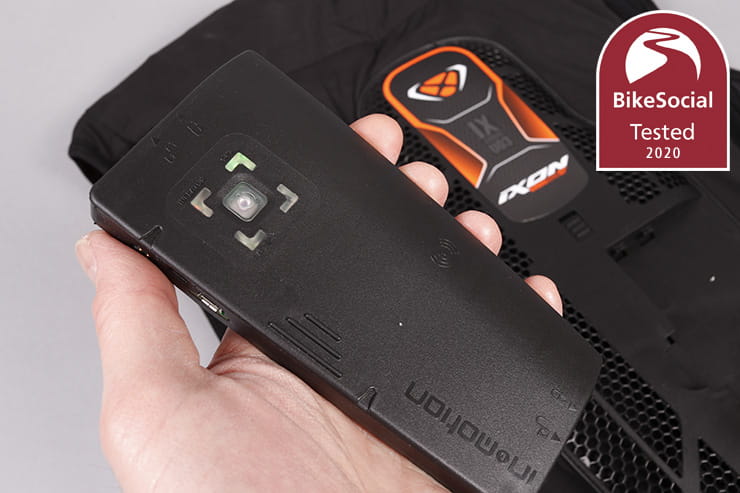 There are no sensors or tethers to attach to your bike with the Ixon Airbag vest; if you’ve left it in standby mode, simply put it on and it’ll automatically power up in seconds. There’s no waiting while it looks for a signal; putting the IX-U03 on is no more complicated than wearing the passive Rukka Kastor 2 armoured chest and back protector.

If the In&Motion box detects a crash (its algorithms are regularly updated to be as accurate as possible and based on anonymous data automatically sent from every user), it’ll fire the inflator and you’ll have the same protection as that worn by MotoGP riders… all within less than 60ms.

Of course, the In&Motion box must have charge in its battery to work, but the lights on it will indicate if it’s getting low. On this vest you’ll likely see the LEDs as you pick it up and it’s something I prefer about the implementation of the system over the other brands that have it inside their garments, making seeing the lights impossible without fishing around inside.

It’s a shame In&Motion hasn’t designed an audible battery warning into the box – it can already make sounds, so I hope that this is something they’ll consider.

Can the Ixon airbag vest go off by accident?

The Ixon airbag vest is tested and approved as PPE in the form of an airbag, but also incorporates a CE Level 1 back protector; that means that, in the unlikely event that the system didn’t deploy, you still have protection running from the top of the spine to the lower back. I have the jacket in large and the back protector is a useful 495mm long.

Before deployment there’s no chest or neck protection, but once fired the airbag will reduce the impact by much, much more than any passive armour. 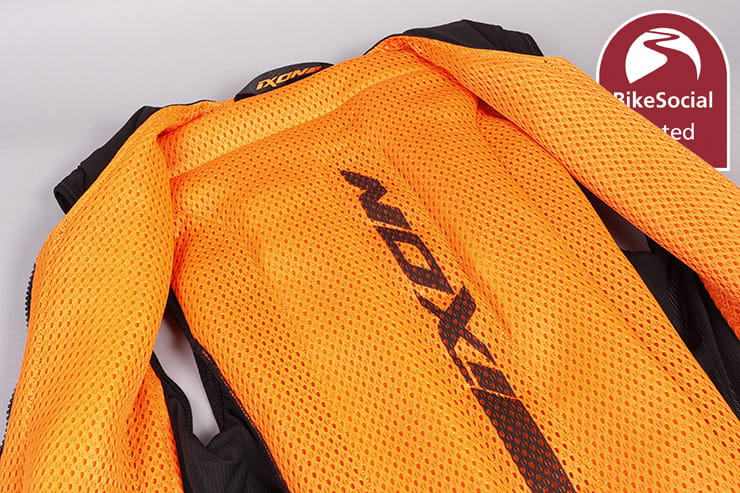 Comfort on and off the bike

Weighing 1.66kg, you are of course adding to the bulk of your bike kit, but it’s really not significant. Make sure you get a good fit, but I’ve found the Ixon airbag vest to be extremely comfortable – it hugs me well and doesn’t make my other riding kit feel too tight.

It shouldn’t be worn with a rucksack, especially a tight one like the Kriega R30 I use most days, and it also shouldn’t be used with zip-together textiles or jackets with a crotch strap. The worry here is that as the airbag deploys, it could give you a serious wedgie. Personally, I do wear my textiles zipped together with this vest, but I’m confident that there’s enough slack from neck to balls that if I do come off, I won’t end up splitting the difference.

The vest is completely lined with a 3D mesh that keeps air moving around your body. Needless to say, an airbag can’t be made breathable, but while this is adding layers – not something you really want to do in the summer – the mesh does an excellent job of helping prevent you from overheating. 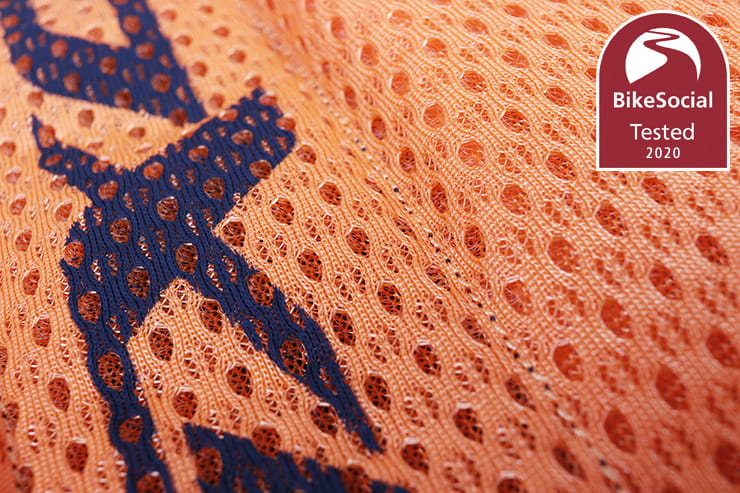 The Ixon airbag vest really couldn’t be more convenient – just put it on and ride. Having to unclip the box in order to charge it is a small hassle you’ll need to live with about once a week if you ride every day (the battery lasts about 20 hours of continuous riding) and a charger isn’t supplied. You get a microUSB cable, so just use any standard USB charger.

While you can use the vest on track if your leathers will accept it, In&Motion charges an extra £25/year or £8/month. It’s not a huge amount of money, but I find it a little greedy to charge more in order to release the additional algorithms, which appear to cater for differences in triggering during high- and low-sides.

This also isn’t designed to be worn off-road, though for the gentle green-lane exploring I do, I’m confident that there won’t be any accidental deployments like there could for a motocross rider. 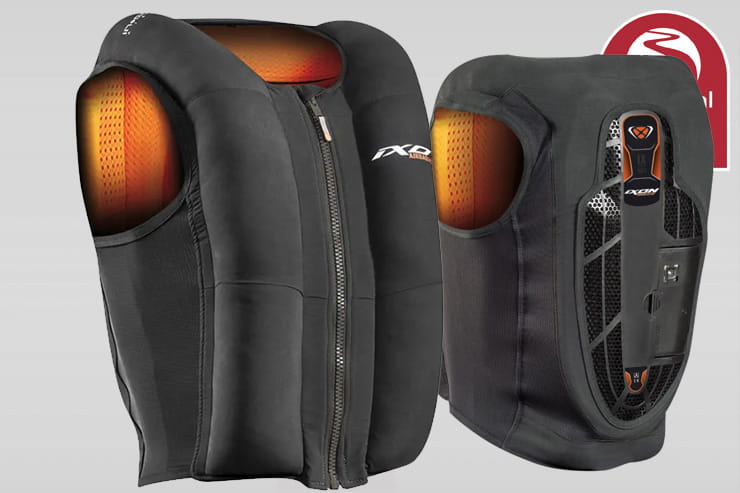 First impressions are that the Ixon airbag vest and In&Motion control box make for an expensive package, but keep in mind that it does compare well with much of the competition, and it has the huge advantage that the box can be used in many other garments.

I can honestly say that the only time I now don’t wear the Ixon airbag vest is when I’m riding in something that I can swap the box over into. Recent tests of the £99.99 RST Axis jacket were carried out while wearing the Ixon, and when I’m riding in my Rukka Navigattor, I always have the Ixon vest underneath.

Hopefully in time the price of the control box will start to come down, but I’ve no hesitation in thoroughly recommending the Ixon airbag vest.