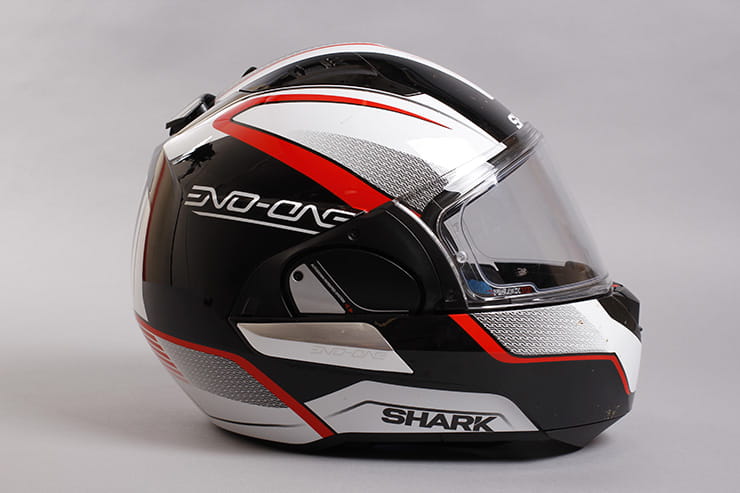 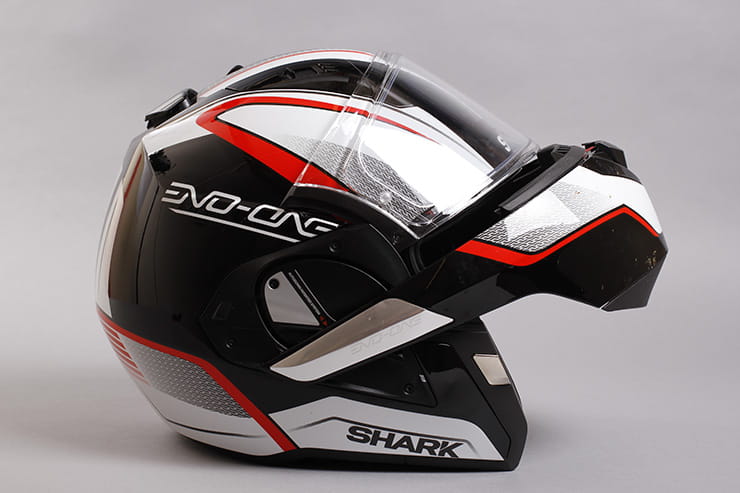 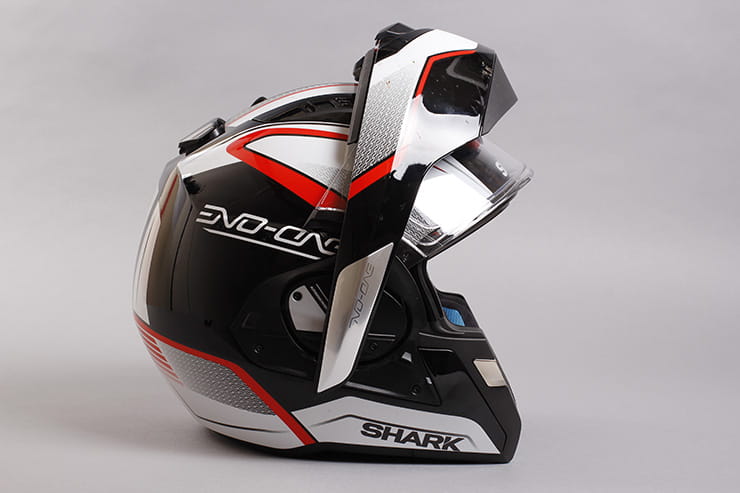 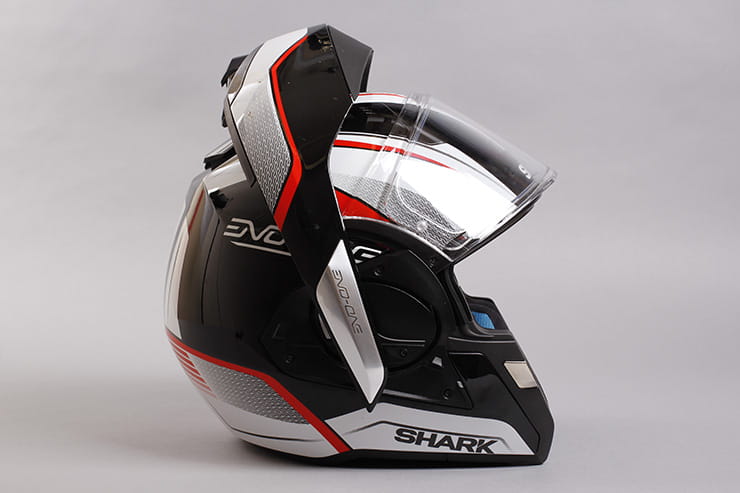 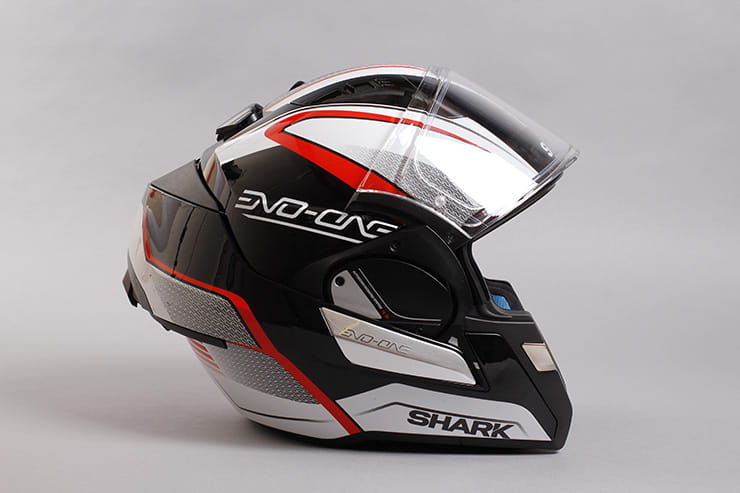 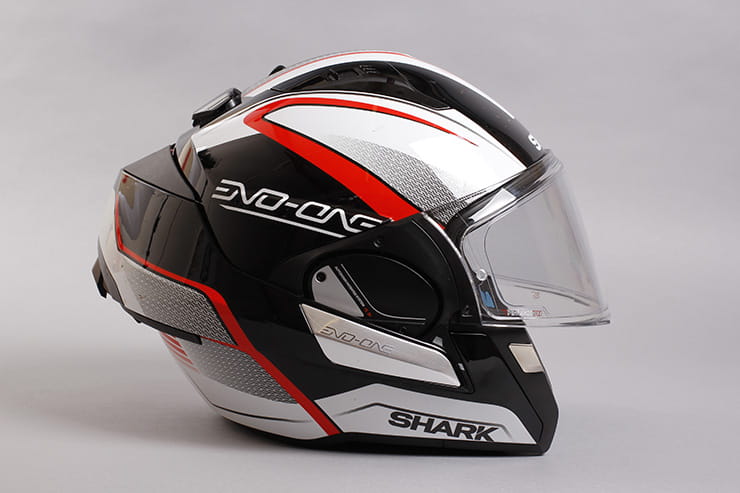 I’m a big fan of flip-front lids for their convenience when filling up, talking to your mates, and getting some much-needed air in hot environments. I’ve been wearing Shark’s Evo-One, which carries a five-year warranty, on both naked and adventure machines – it’s a dual-homologated lid, which means it’s rated as a full-face when closed, and is legal to wear when flipped open…

This thermoplastic helmet uses two shell sizes across its XS to XL range. Unlike most other flip-fronts, the chin-piece rotates all the way up and over to the back of the lid, latching securely in place. When opening or closing, the visor will automatically pop up to allow the chin to lock in – it won’t close itself again, but unlike most other flip-fronts, you can ride with the chain bar up, but the visor down.

As the chin section locks to the rear of the helmet, there’s none of the drag usually associated with riding in an open flip-front. The chin is easy to open with one hand – push the button, then pull the section forward before rolling it up and over your head, to lock at the back.

Returning to a full-face configuration is slightly more awkward – unlatching it from the rear takes a little technique, and it’s important not to catch the open visor with your sleeve, as it’ll temporarily jam the mechanism. It can also be difficult to lock securely closed – it’s important to give the chin piece a good press backwards and slightly up to ensure it’s located. Before I mastered the technique, I’d often open the visor and realise I’d been riding without the chin-piece properly locked in. Keeping the mechanism clean and lubricated with a little silicone oil – as with any helmet – helps it to work at its best.

Finish is good, with well-applied graphics on this, the Astor KWR model, which costs £379.99. 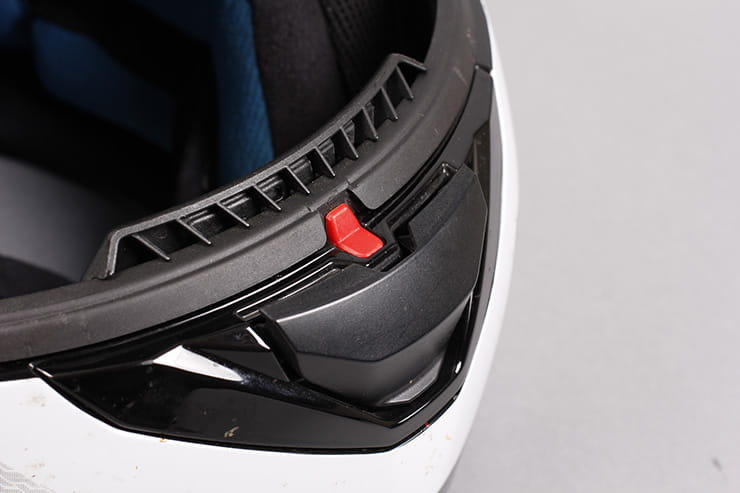 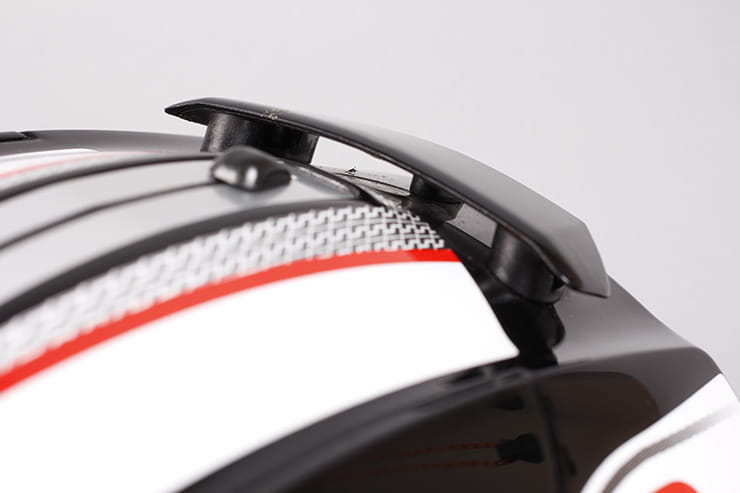 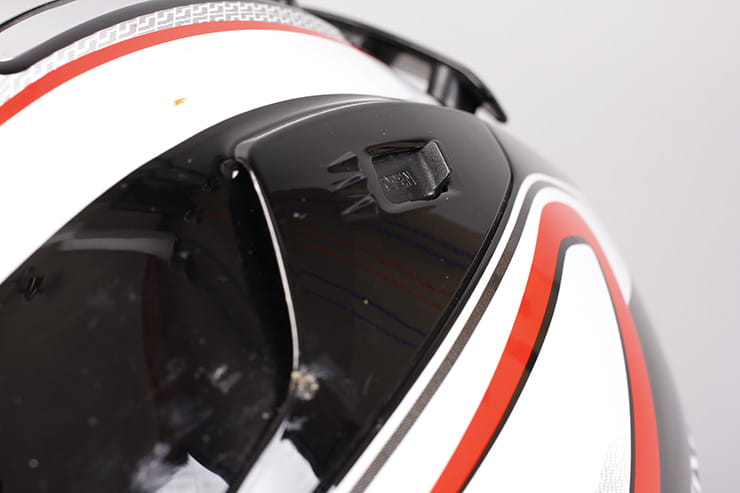 There are no brow vents, but the dual-homologated design means it’s easy to get plenty of air with it open. The visor can also be cracked slightly open, well before the first stage of the ratchet. The two top vents are either open or closed, with a pair of always-open exhaust ports at the upper rear. 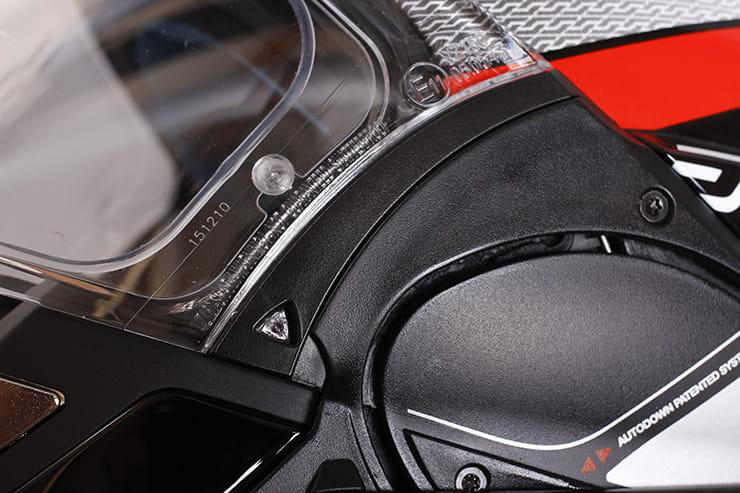 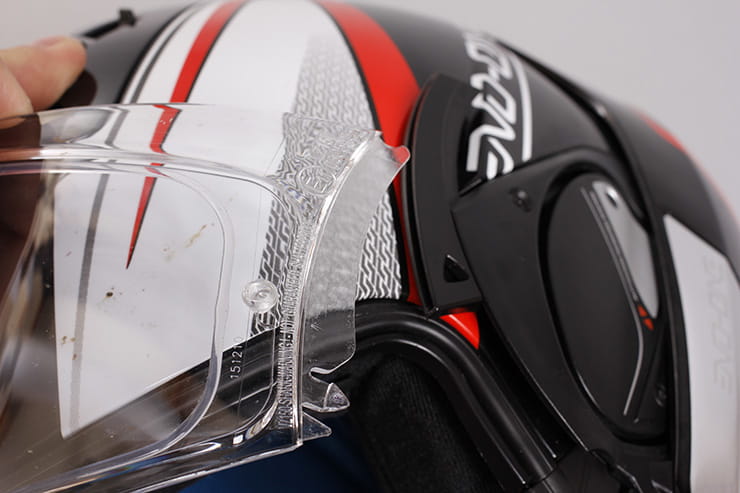 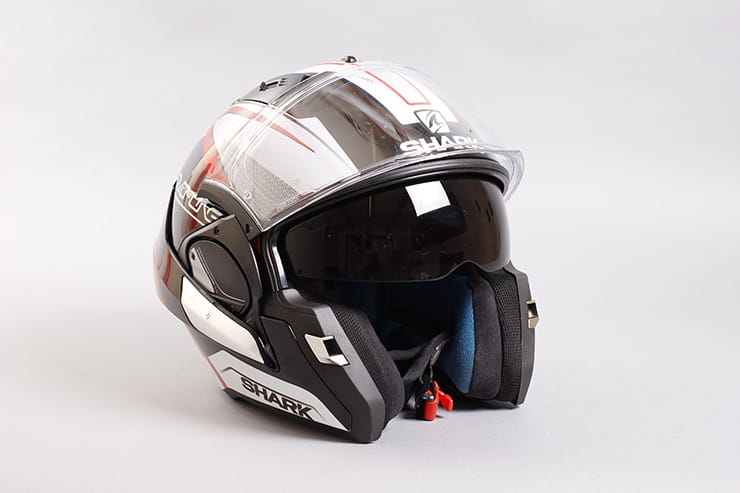 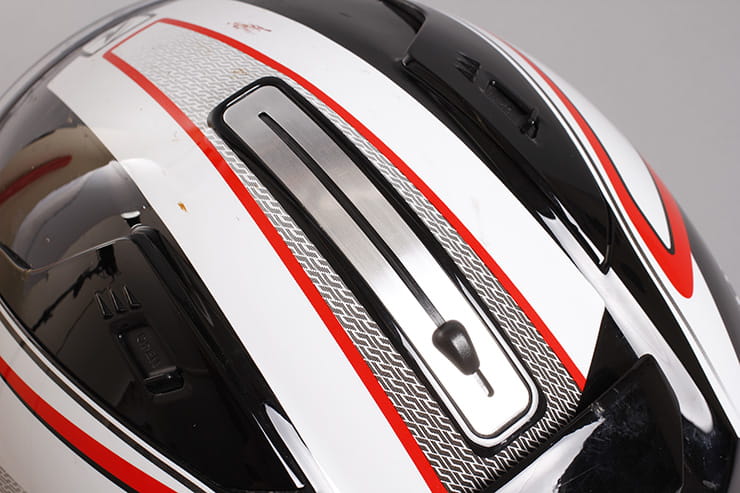 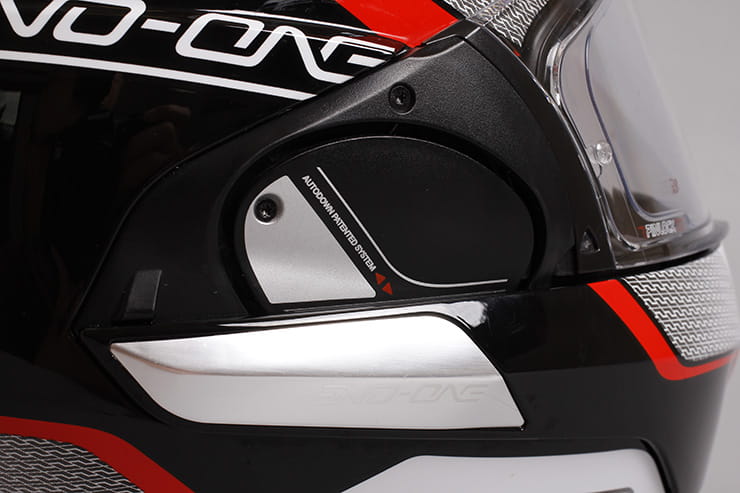 The viewing aperture is good, if not the largest, and well positioned for a more upright riding position – as with other touring-focussed lids, track riders will find the brow rather prominent when laying across the tank. An anti-fog Pinlock MaxVision insert is supplied, the edges of which don’t interfere with vision.

There are two thumb tabs for opening the visor, making it easy to flip open with your left or right hand (important if sitting at the lights with the clutch held in).

Changing the visor requires a pen or similar to be poked into the triangular apertures on either side – once mastered, it’s reasonably easy, but the small plastic tabs do little to inspire confidence. I prefer to wash my visors when removed from the lid, but I avoid taking this one off as much as possible.

Early versions of the Evo-One had a problem with the Pinlock insert rubbing on the top of helmet when closing the visor. This has been fixed, and while the instructions also now say you should close it by pulling from the upper centre of the visor, rather than the thumb tabs, after several months of use, there are no marks appearing, and only excessive pressure on the thumb tab will deflect the visor enough to touch the shell.

During very heavy rain, the visor seal proves inadequate, water tending to enter along the top edge, before rolling along the upper Pinlock aperture and dripping down inside the centre.

The drop-down sun-shield is 23% larger than that of the Evoline version, and gives very good coverage. I find the bright line along the bottom rather distracting on most shields, but here it’s minimised. There’s also resonable space for my nose, and the top-mounted slider gives plenty of control, allowing you to position it to best suit your face, rather than being simply open or closed like many others. 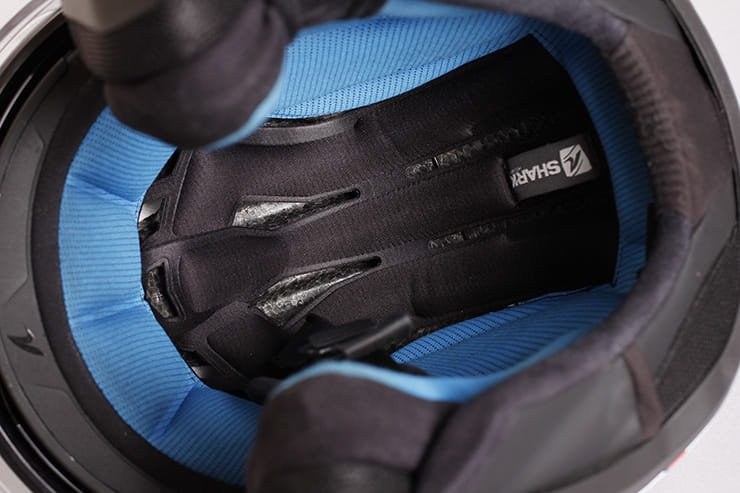 The removable lining is soft and comfortable, with a shallow space for intercom speakers.

The neck has an elasticated rear for a good fit, while a skirt can be pulled down from behind the chin-piece. This works well, though can be slightly harder to get to if you have bulky winter gloves on, or a particularly prominent chin. 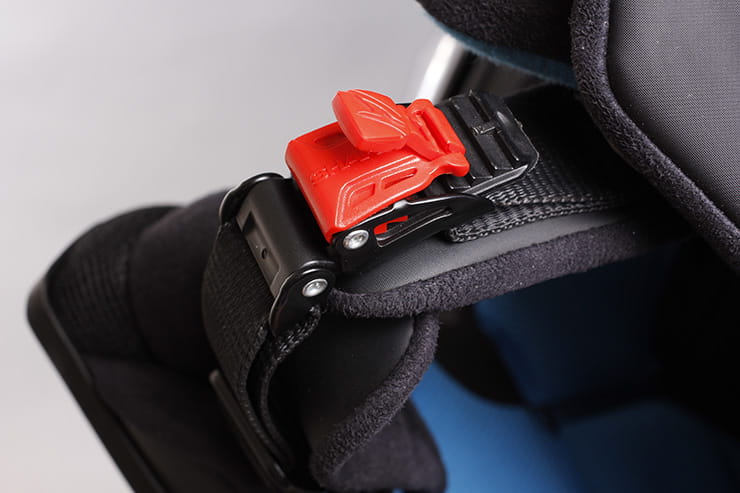 The Evo-One uses a quick and easy ratchet mechanism. This design has replaced the seat-belt buckle style of many older lids, and once adjusted to suit, gives a good range of adjustment when fastening, ensuring a secure fit every time.

Comfort is subjective, and very dependent upon your head’s size and shape. I find that only around half of Shark’s current range of designs fit me comfortably, the Astor being one that does. It’s secure on my head, and glasses fit easily, though the long cheek sections mean it can’t be put on – while open – with your spectacles on. A minor point, but something I appreciate with other flip-fronts. 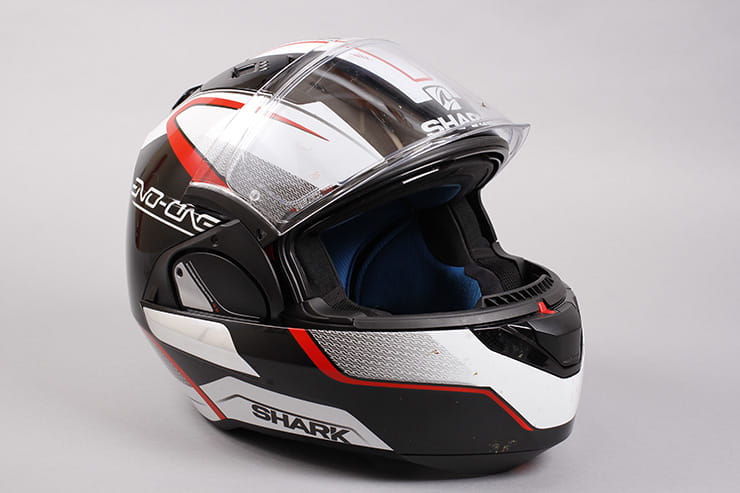 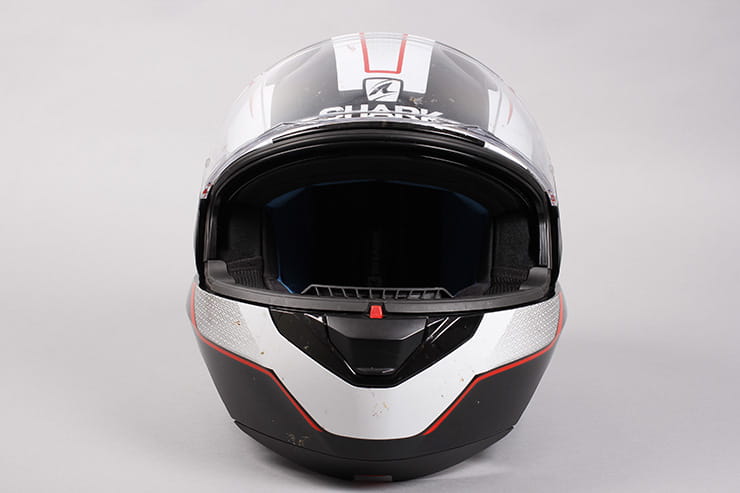 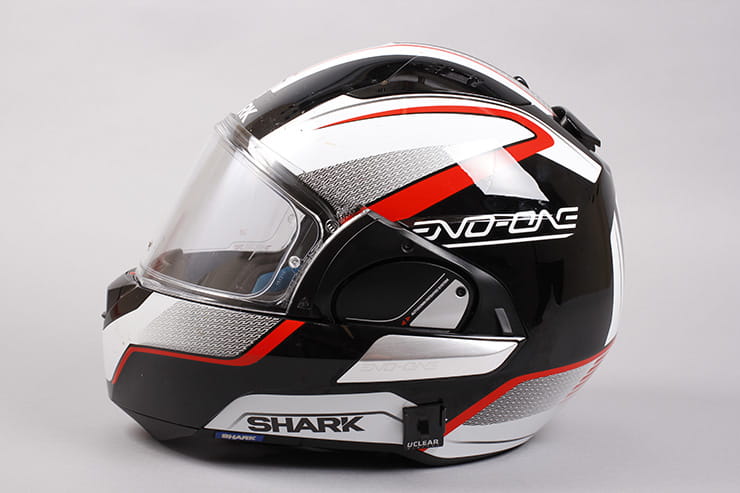 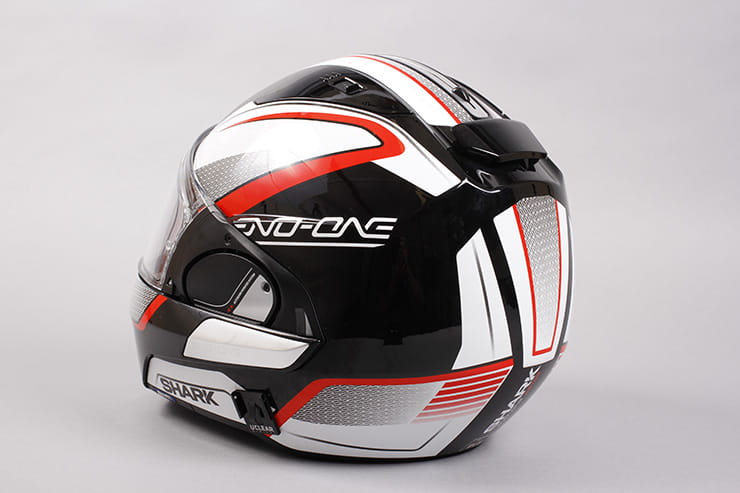 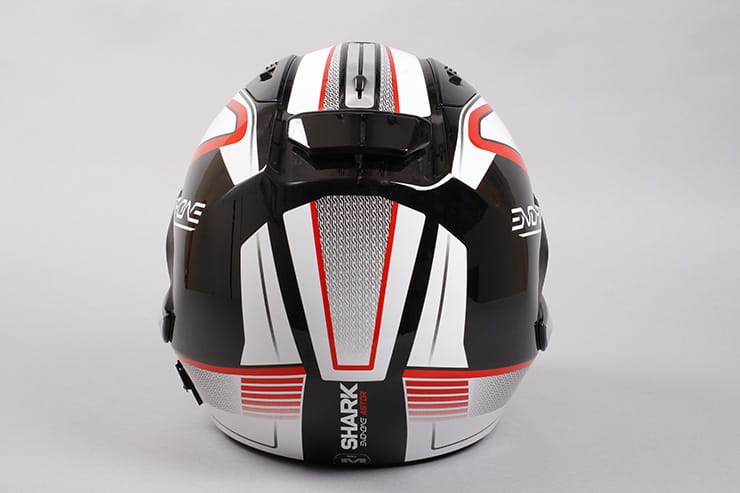 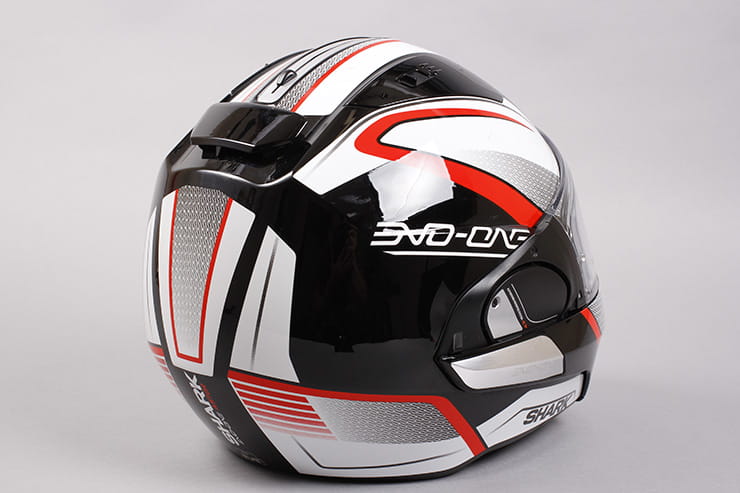 I’ve yet to find a helmet that doesn’t require earplugs for safe use, particularly at prolonged motorway speeds, but the Shark Evo-Line is a little noisier than other helmets. This is most likely due to the exposed flip mechanism, and isn’t bad enough to spoil your ride.

The Evo-Line will be of great benefit for many touring riders, particularly those riding in hot climates with a fully-faired touring bike; the combination of eye protection, with the ventilation of an open chin section makes this a great summer helmet that’s only really let down by its poor wet-weather sealing.