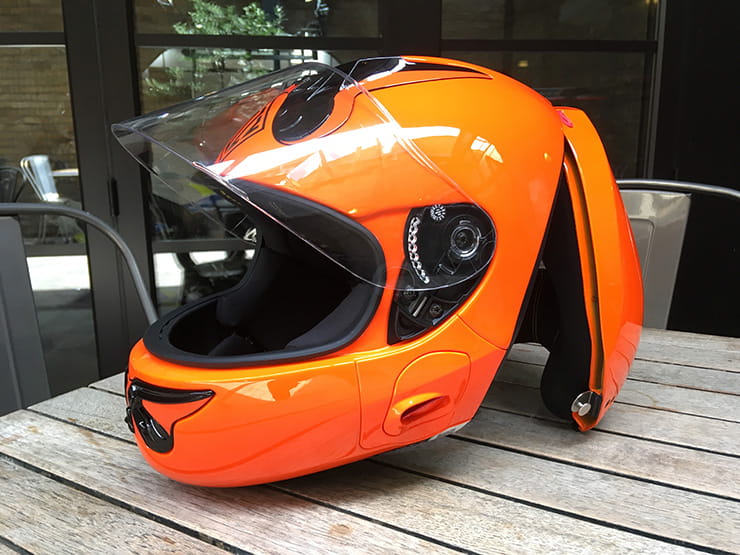 The new Vozz will – the importer Helmet28 claims – revolutionise the motorcycle lid market. At its most basic, the ECE 22.05-approved Vozz RS1.0 is a full-face lid that splits vertically towards the rear, making it very easy to put on, and having huge implications for its removal in the event of an accident.

The UK press launch was held at The BikeShed in London, so I took the opportunity to ride out through the city-centre and up the M11 to get the most in-depth first impressions; to find out if this really is a game-changer…

The front section of the shell is a Kevlar and carbon-fibre composite, with the rear section made of ABS. There are three shells (casques) used across six sizes – XS and S, M and L, XL and XXL. The base of the lid flows down around the neck line, creating a very close fit to the neck – something that’s impossible on a normal shell.

Specified as 1680g for this medium/large shell, during this first test I haven’t had access to scales, but the weight compares to 1629g for an Arai Quantum ST, 1679g for a Shark Evo-One flip-front, and 1691 for a Shoei Neotec with intercom fitted. 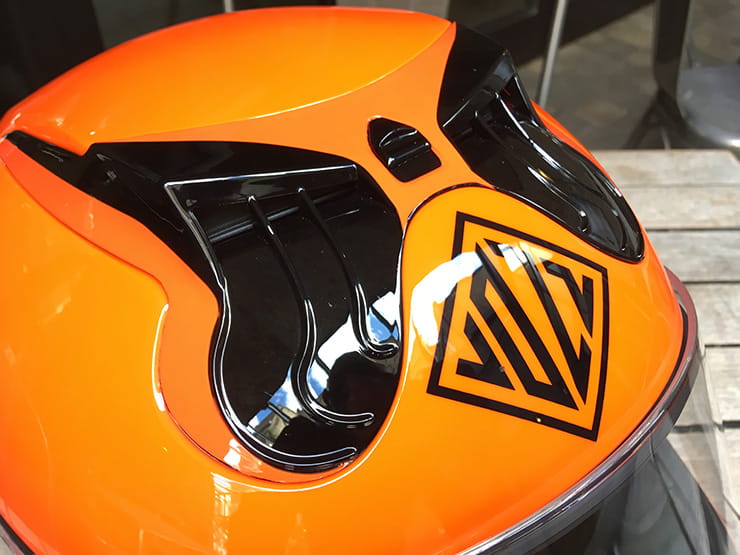 Riding for an hour and a half through London and up the motorway, the Vozz felt comfortable, but it’s too early to give a full comment on the ventilation – long-term testing through all weathers and in several countries will give the clearest view.

The chin and top vents are easy to operate, with a single button offering open or closed, and a pair of permanently open exhaust ports on the rear. I noticed a slight draft around my ears when riding the naked Suzuki GSX-S750, the air coming up in front of my chin, but this wasn’t uncomfortable, and helped create an airy feel to the lid. 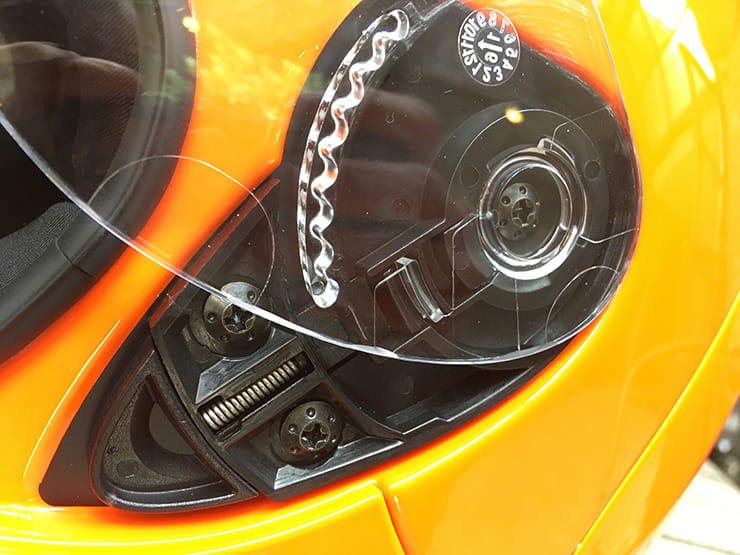 The Vozz comes with clear and dark visors as standard (as well as a very useful helmet kit bag, which will be personalised for the first customers). There’s no Pinlock, but the importer tells me that the anti-fog coating is of a very high standard. The view was very clear (partly thanks to not having the second plastic layer of an insert), with excellent peripheral vision from the wide aperture. Long-term testing, which I hope to start soon, will give a better indication of the visor’s performance.

At high speed, when looking over my shoulder, I noticed the visor just lifted open a tiny amount, seating again as I returned to the front. It didn’t let any more wind in, but only more testing will show if it could let a small amount of water in. 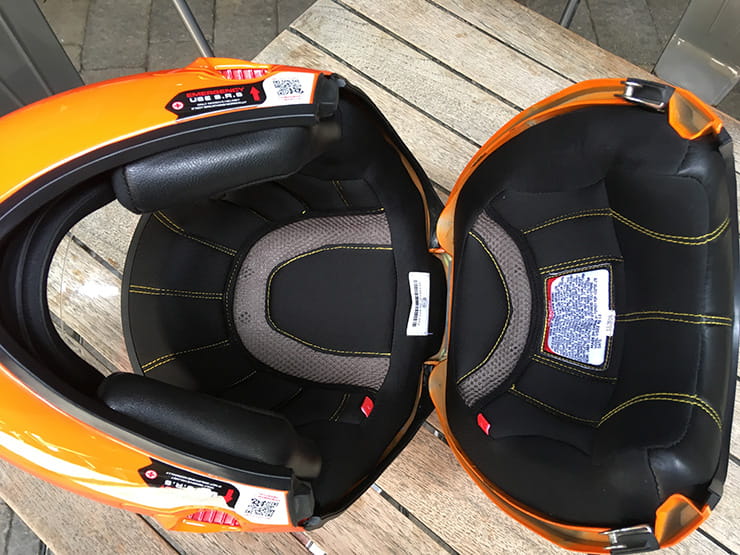 The cheek pads (available in six sizes) and chin cup are removable, but the rest of the lining isn’t. The fabric is soft and very comfortable, and the chin-cup, which is key to the fit of the lid, sits easily around my chin, only causing a slight restriction if trying to open your mouth wide; it’s still easy to talk, but yawning is harder (as it is on some modular lids in particular).

A universal mounting clip for intercoms is in the pipeline, but further testing will be needed to try various devices. 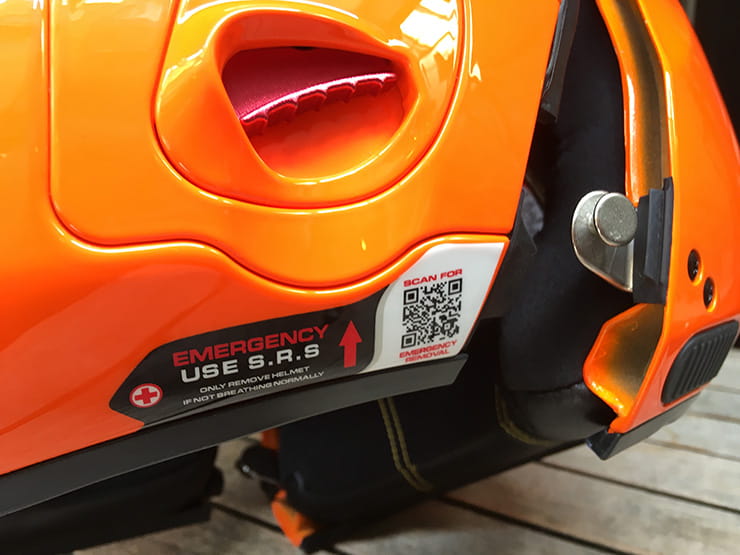 There’s no strap. The helmet fits snugly around your neck, thanks to the much-reduced opening allowed by the revolutionary fitting system. The chin cup – which is adjusted forward and back by the store when buying – holds the helmet firmly in place as you click it closed.

Putting the lid on is very simple, even with glasses – push the aluminium side levers up, let the rear drop open, then push your head into the front; it’s a simple job to pull the rear into place with your thumbs until it latches securely. Removing it is even easier – just push the two levers up and pull the helmet forward then off.

In the event of an accident, the RS1.0 can be opened without having to move the neck at all; the rear of the Vozz keeps the spine straight when laying on your back. If you’re not breathing, the lid has to come off, so this really is a big deal. It’s also possible to remove the top section of the lid completely, though this would require a screwdriver or similar (it also voids the warranty).

First impressions of the Vozz

I’ve never used a lid that is this comfortable from the outset – once adjusted to suit me, the RS1.0 felt perfect at every point of my head. I thought the cheek pads might be a little loose at first, but riding proved that the usual ‘hamster cheeks’ weren’t necessary to keep the Vozz perfectly seated, even at high motorway speeds. Even on a naked bike, I never felt that it wanted to lift or twist, and it gave little drag when turning my head for a life-saver.

While comfort is of course very subjective, I had no pressure points at all, and as is this a custom-fit lid, there’s a good chance you’ll find it just as perfect. My only small criticism is that I felt there was a little pressure on my glasses, pushing them against my nose. It didn’t cause me any discomfort, so while I’ve not used it enough for a definitive view yet, I’m looking forward to putting many thousands more miles in with the Vozz – it’s one of the best places I’ve put my head.

The close-fitting neck line is claimed to reduce wind noise, and it really does work. If covering many high-speed miles, I’d still likely chose to wear earplugs, but this is the first time that I’ve used a lid that really left me feeling that I could do without.

It’s far from silent, but there’s none of the booming usually associated with a motorcycle helmet – the rushing sound is pleasant, and even towards motorway speeds, far from intrusive.

The Vozz has a three-year warranty when registered online. While it’s rated to ECE 22.05, it’s not yet got race approval. “Snell Testing currently does not test modular helmets,” Helmet28 MD George Richardson tells me. “As with ECE, we are addressing this and we should have a formal test/meeting soon. We are also in the process of applying for FIM, which we are 13/16 months away from. Our dream is to have our helmet on a Moto GP rider as soon as we can. We believe the technology we have could be used to real benefit in racing.”

While this was a very short test, I’ve been thoroughly impressed with the Vozz. Living with it will be the real test, but if the results match today’s findings, this really is the game-changer that it claims to be…

George Richardson, 26, is the managing director of Helmet28, and a professional endurance racing driver, competing in the LeMans, Nürburgring and Spa 24hour events; “The Vozz helmet project was started in 2005 by two Australian skydivers – John Vozzo and Mark Bryant – as they looked to create a parachutist’s lid that opened at the rear.

“The skydiving market is not particularly big, so in order to make a project like this viable, they needed to look to a larger market… Motorcycling is the second biggest user-base of safety helmets, after the construction industry.

“I’ve been karting since I was 12, turning professional when I was 16. I one day thought ‘if my racing career were to finish, what have I got to back myself up?’ I came across various products that were being sold out of rucksacks at tracks, and thought ‘I can do a much better job than that’, so in 2013, at the Daytona 24hr, I signed a European contract to distribute an Australian company’s replacement rubber trim for helmet visor apertures.

“That’s where the business started – at kart races now, every kid has our stuff on their helmet; Lewis Hamilton had our air vents. The next step was distributing Molecule – a premium water-based helmet and suit care brand [expect full reviews on BikeSocial soon].

“We now have nine staff, distributing across Europe. As a company, we’re looking for innovative products that need market introduction to Europe. Vozz came along... I saw it and thought ‘wow – that’s awesome’. Within two weeks I met the Australian team halfway in Dubai, and now Helmet28 is the distributor.

“We see this lid as appealing to early adopters – this is the latest tech. We’re already 4.7 million dollars into the patent and production.

“During our social media campaign, we’ve seen people take an interest who have sportsbikes, café racers, adventure bikes… everything, but a large proportion of our marketing spend will be put into educating the emergency services. I’m currently in talks with the blood bikers too.

“It’s been a long time coming to see something like this, and I really think this helmet has the legs to disrupt the marketplace, whether it’s under the Vozz brand, or as licensed technology.”