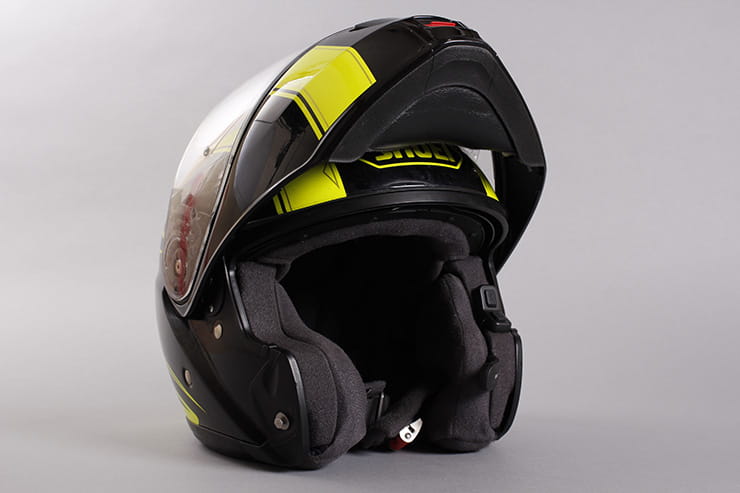 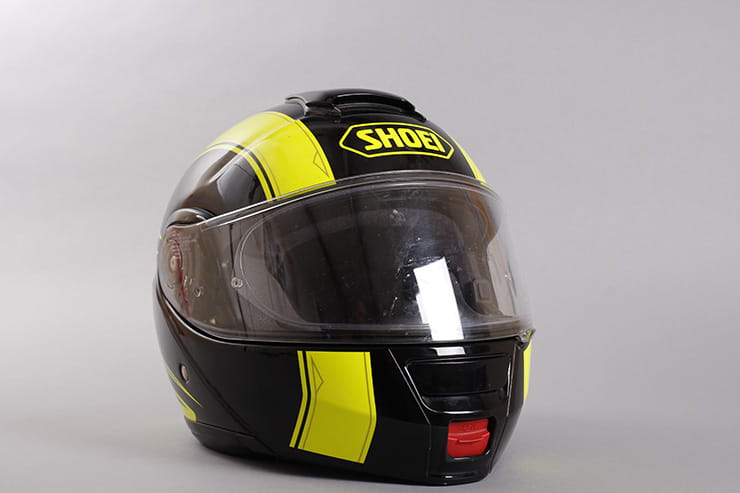 I’ve had this Shoei Neotec for almost three years now, and have ridden tens of thousands of miles with it, to Spain on the back-roads of France in the height of summer, and Luxembourg and back, again via back roads. This is my day-to-day lid; the one I choose if I’m not testing something else, or needing a full-face or open-face for a photo-shoot.

The composite fibre shell with ABS chin section uses three outer sizes across the XS-2XL range (meaning a small lid doesn’t have a huge outer shell to accommodate the bigger size). The chin flips up with a button on the front, which is easy to use with any gloves, and more importantly, locks down positively without any problems; I’ve found some modular helmets – like the Shark Evo-One – can require two hands to ensure they’ve safely latched closed, but this Shoei is always very secure and smooth operating.

It’s important to note that the Neotec is not dual-homologated – it’s only rated to be ridden as a full-face, not as an open-face too. Technically, you shouldn’t ride with this helmet open, but I have, and it’s never closed itself.

The shell is a good shape, not looking too bulbous from the front like some flip-ups can, and the finish is excellent, a deep lacquer standing up exceptionally well to stone chips.

This colour-scheme has been replaced now, but the current range costs £499.99 for plain, and £549.99 for graphics. The closest to this style is currently the ‘Imminent TC-3’.

My medium Neotec weighs 1691g with the Sena 10U intercom fitted, so it’s lighter than a Shark Evo-One, which weighs 1679g without an intercom, but heavier than the 1667g Schuberth C4 (with intercom). 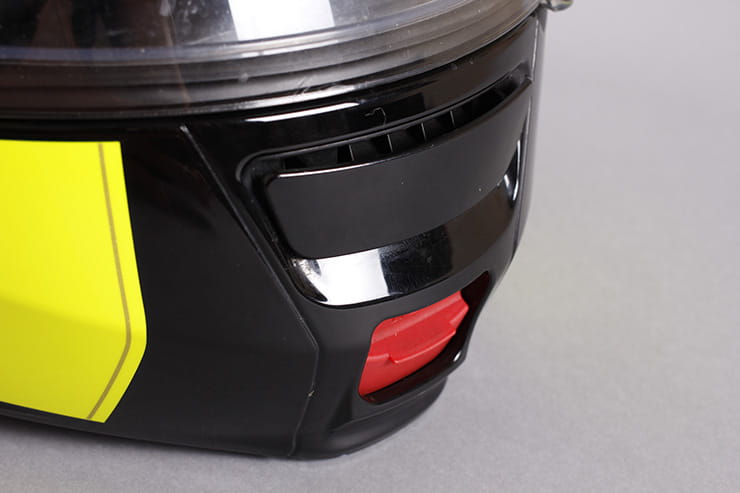 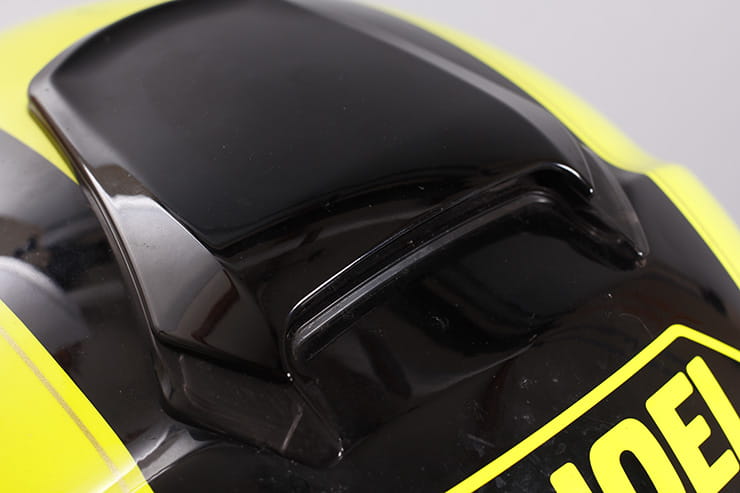 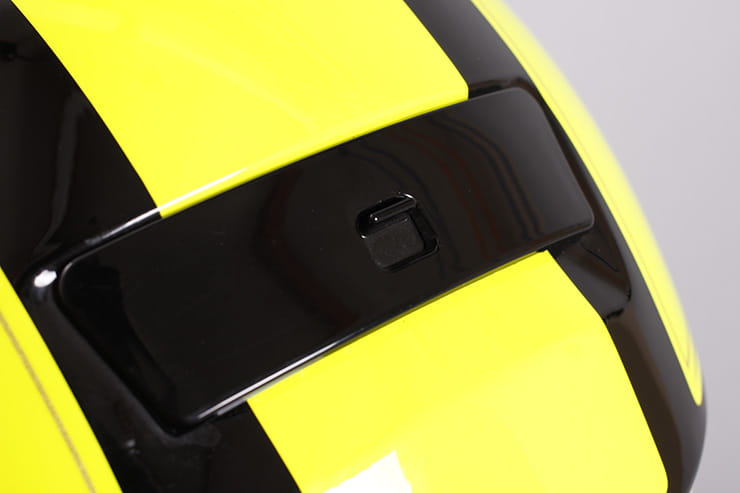 The vents are excellent. The chin is simply open or closed, while the top has two stages plus closed. There’s also an exhaust port that can be closed on the rear. Each vent makes a very discernible difference – closed, the interior is still and draft-free, but each provides an exceptional rush of air when opened.

The visor can also be cracked slightly open with the thumb-tab on the left if the chin vent is too much, while a chin skirt at the bottom is removable for more air. 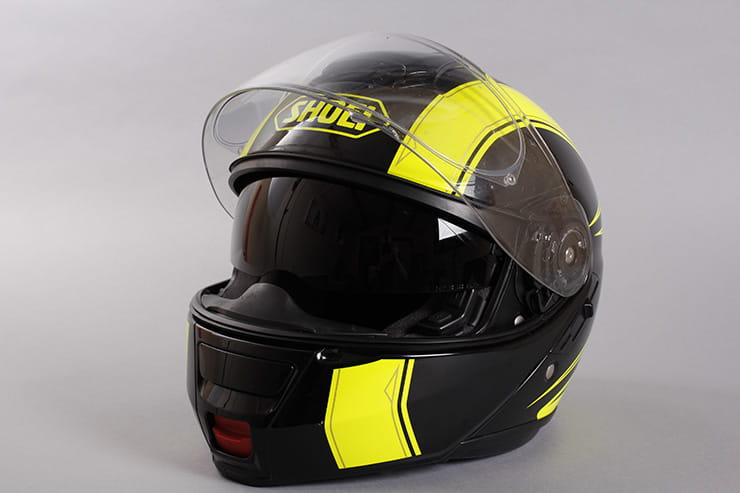 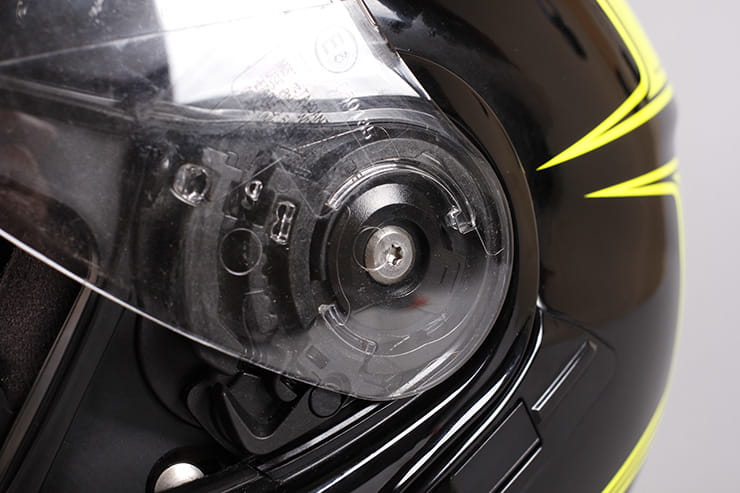 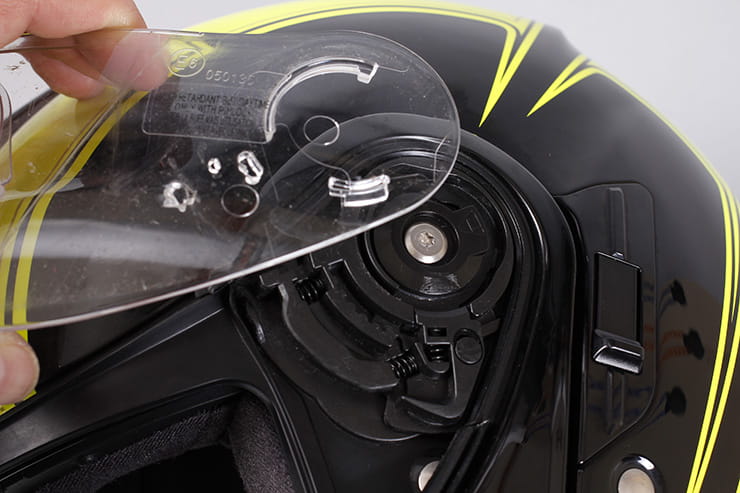 The visor operates on a ratchet system over seven steps; it can be rather stiff to use, but it stays in position at any speed, and keeping the mechanism clean and lubricated with silicone has it at its best. A Pinlock is supplied, which doesn’t interfere with forward vision, and while you can see it in the extreme left and right, it’s not distracting.

The visor’s lasted well, with only a few light scratches, and it doesn’t leak in the wet, thanks to the clever auto-sealing system in the mechanism that draws the visor back into the shell when fully closed. It’s also very easy to remove for cleaning, and just as simple to pop back in place.

There’s only one thumb-tab for opening – as on the majority of helmets – which I find frustrating when sat at traffic lights with the clutch held in.

The Neotec has a drop-down sun-shield, which doesn’t hit my nose and comes down further than a Schuberth, but not as far as a Shark. I’m not a great fan of these, as I find the strip of light along the bottom edge to be distracting, and prefer to keep as few layers of plastic between my eyes as possible – I use a black visor, and carry the clear with me, in case the weather changes. 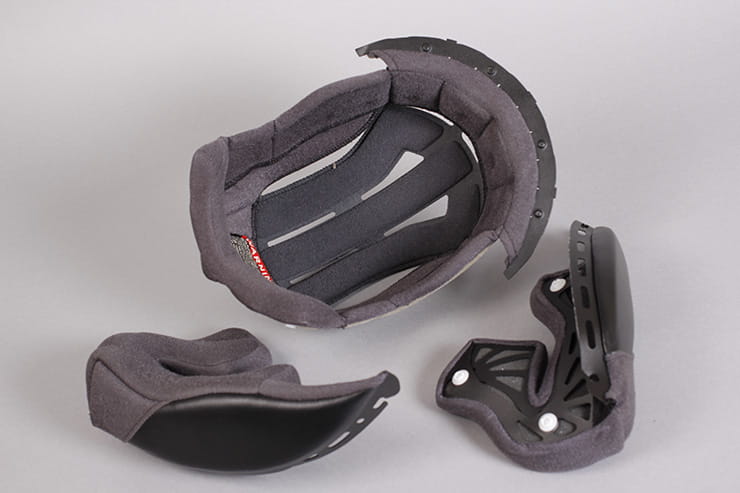 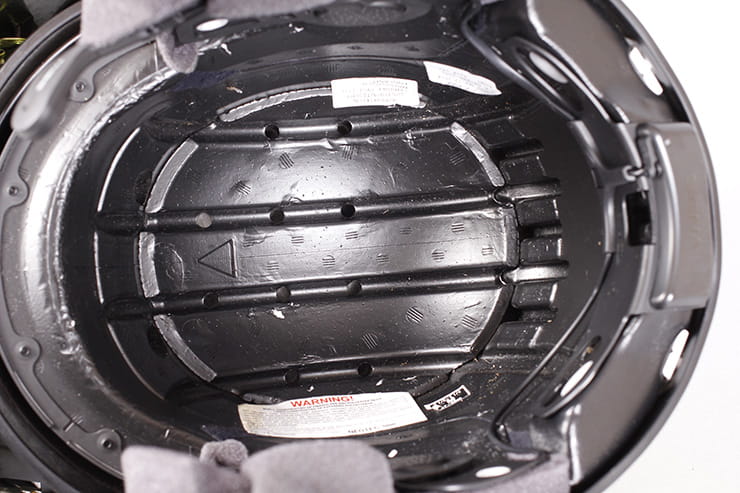 The fully-removable lining is very comfortable, and wears well – I’ve washed it three times now, and it always feels as good as new. While linings should be hand-washed, I simply pop the pieces in the helmet bag supplied, then run the machine on a gentle cycle. 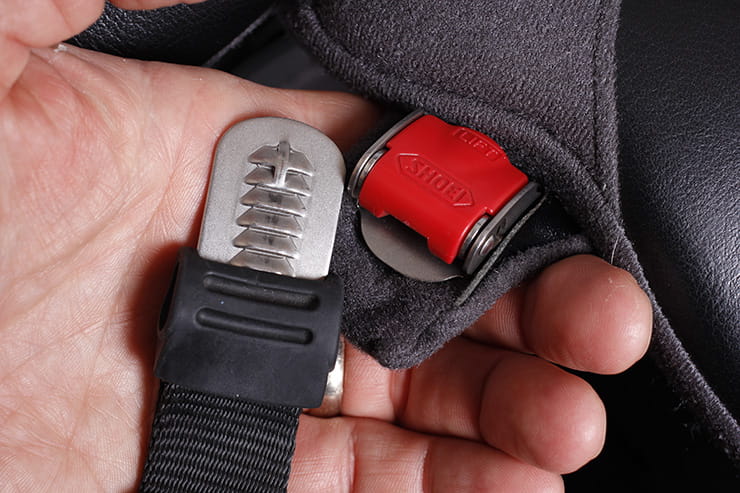 The Shoei uses a metal ratchet fastener, which once the strap is adjusted to suit, gives a positive and tight fit every time. While some riders prefer a double-D ring system, it does suit a helmet of this type, and can be opened and closed (just) with gloves on.

Comfort is very subjective, but I’ve found the Neotec to be an excellent fit. I wear glasses, which pass easily into the helmet, and – with practice – can be worn while putting the lid on and taking it off.

There are recesses for intercom speakers, and while I’ve tried various brands with success, including Sena, Interphone, Vertix and U-Clear, I’ve settled on the Sena, which is designed specifically for the Neotec. 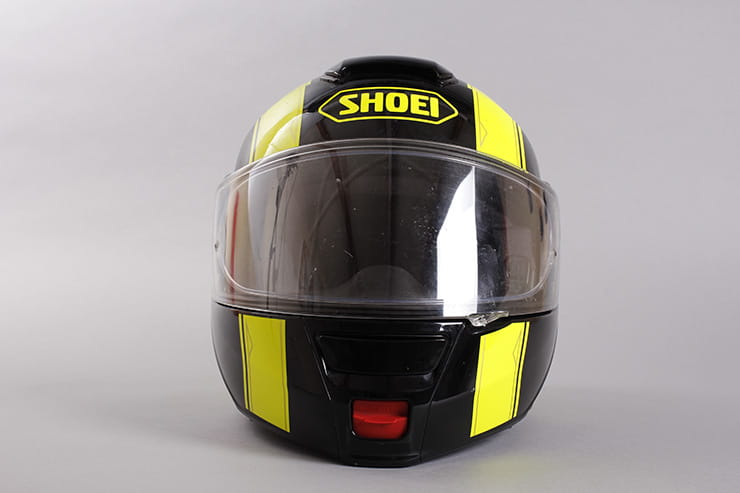 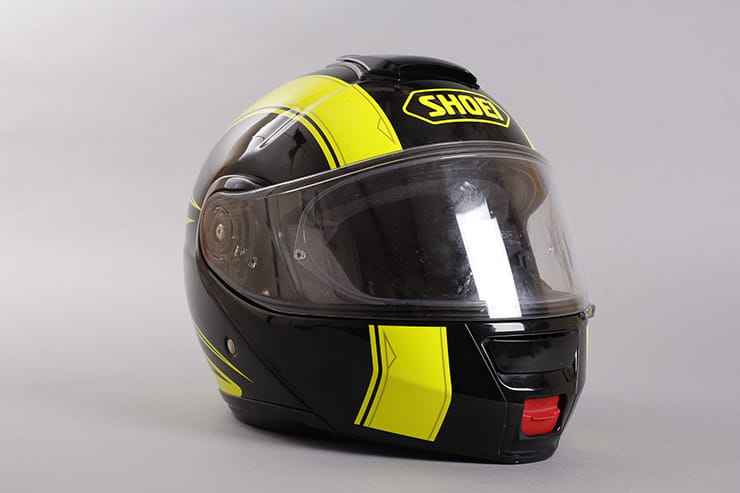 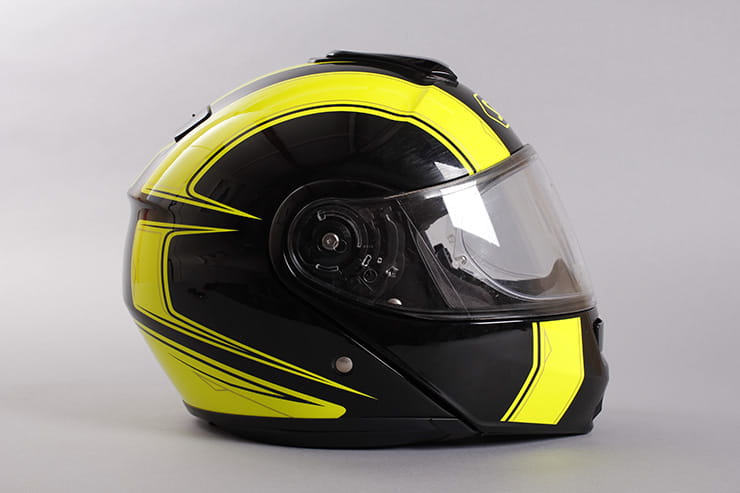 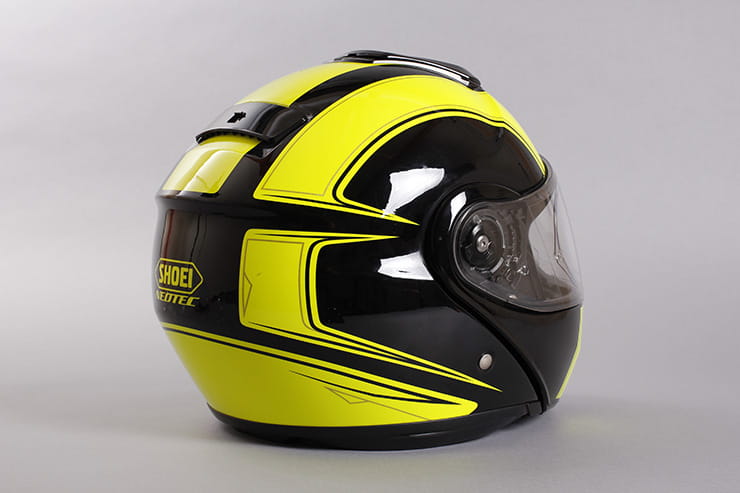 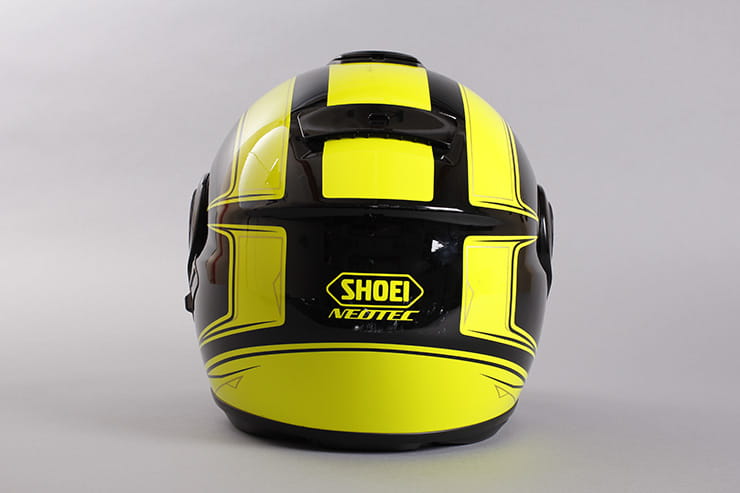 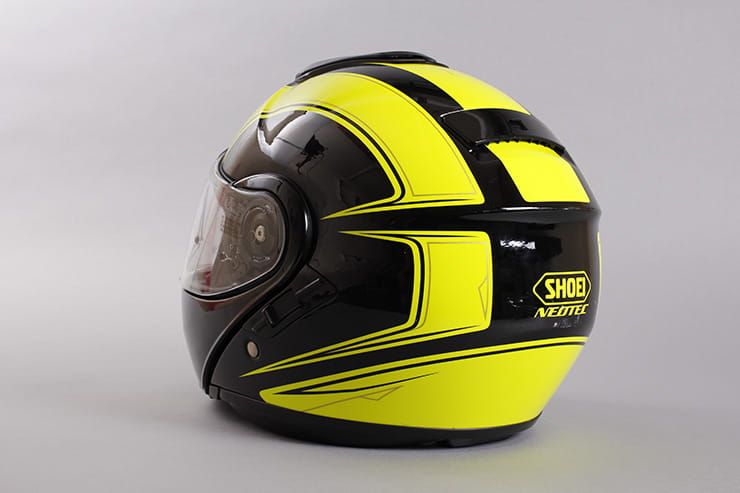 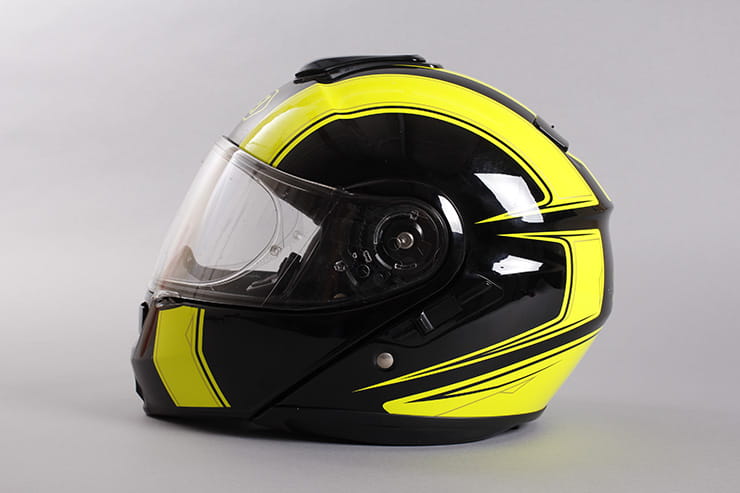 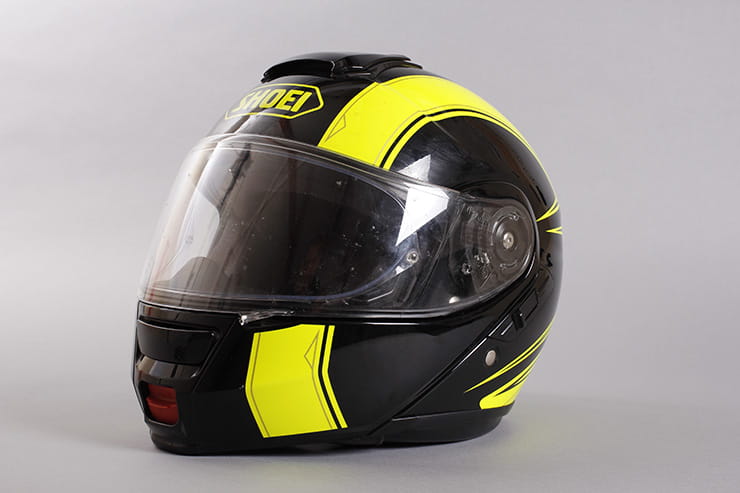 I’ve yet to use a standard-fastening helmet that doesn’t need earplugs (the closest I’ve come is the unique Vozz), but the Shoei is about as noisy as you’d expect – it’s a little louder than the best full-faces, but one of the quieter flip-fronts. I’ve ridden 500+ mile days in it with without any complaints.

While flip-front – or modular – helmets tend to divide opinion, I think that only those who’ve not tried a Shoei Neotec could think it anything other than a brilliantly versatile piece of kit. The convenience of being able to flip the lid open at a filling station or to chat with mates at a standstill, combined with the chance to use it as an open-face in very hot climates makes it a perfect all-rounder. I test a lot of bike kit, but if I could only have one helmet, it would be a Shoei Neotec.