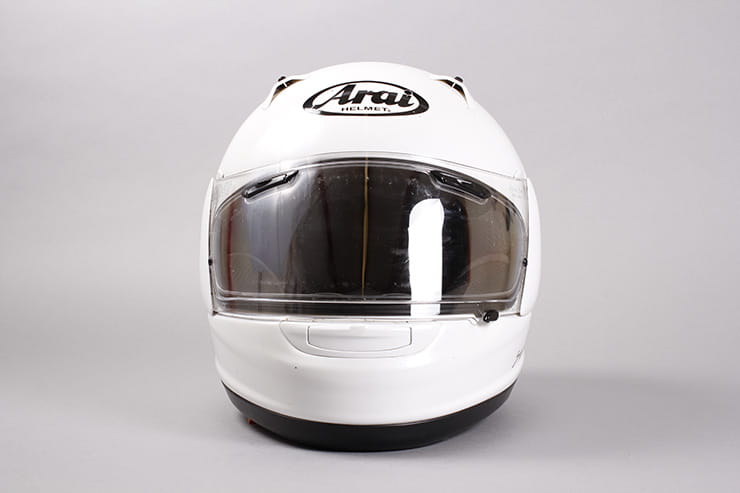 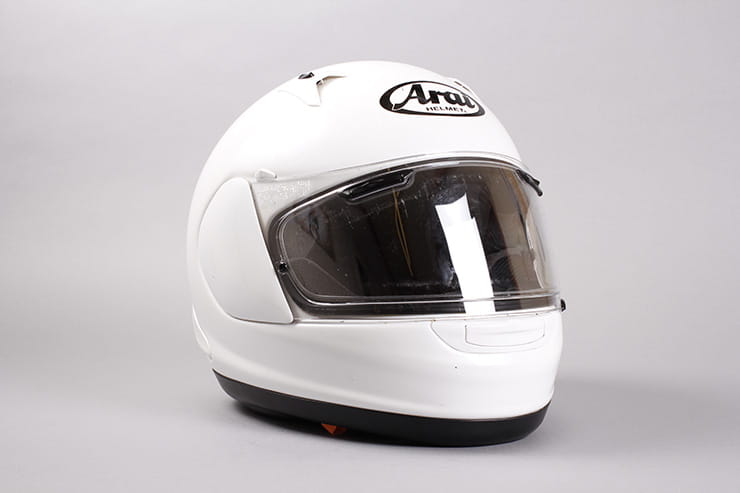 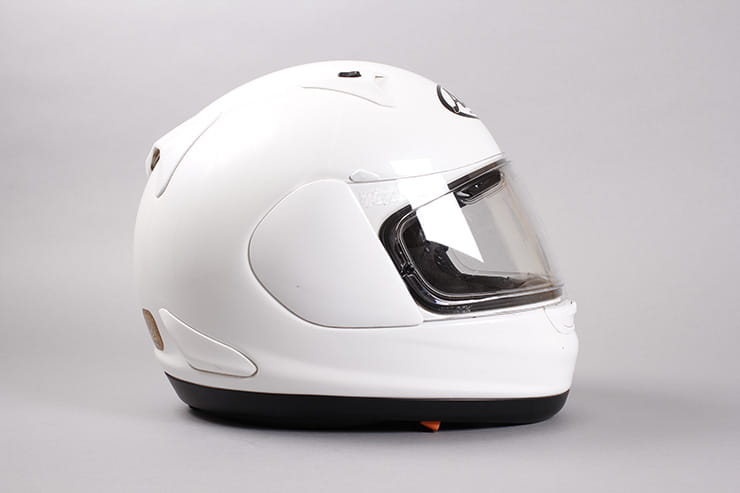 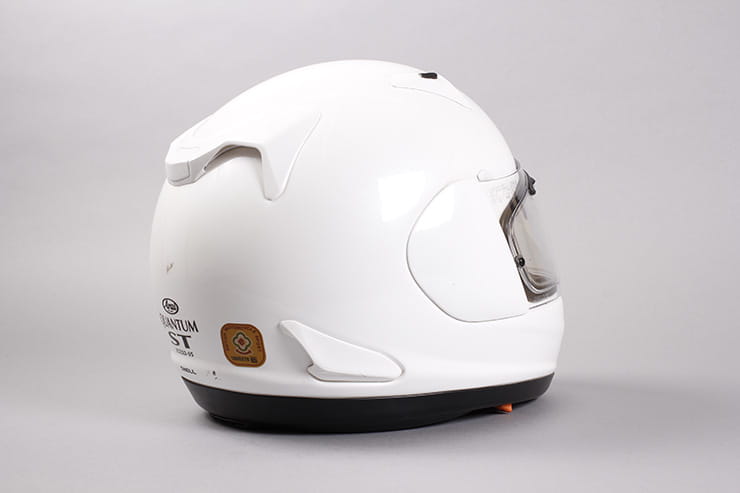 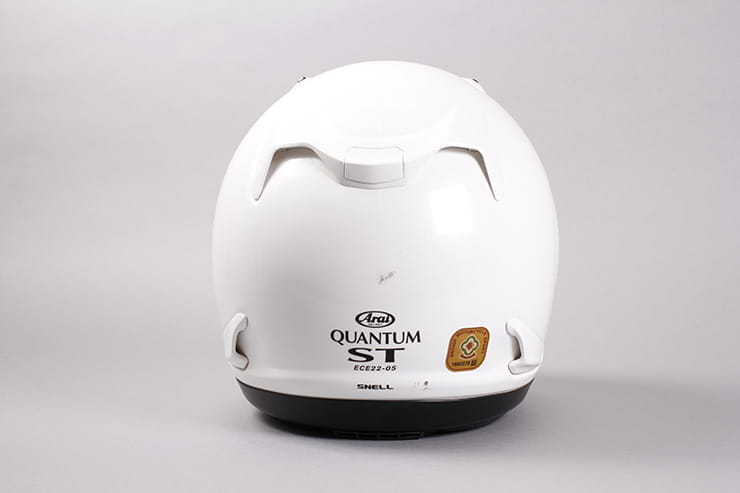 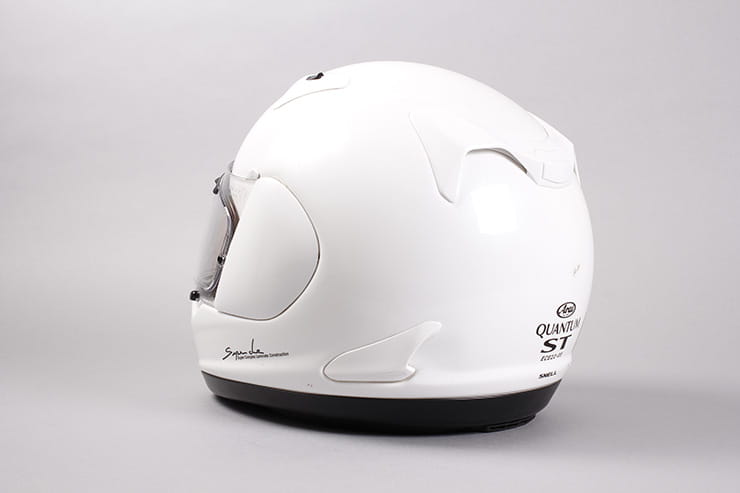 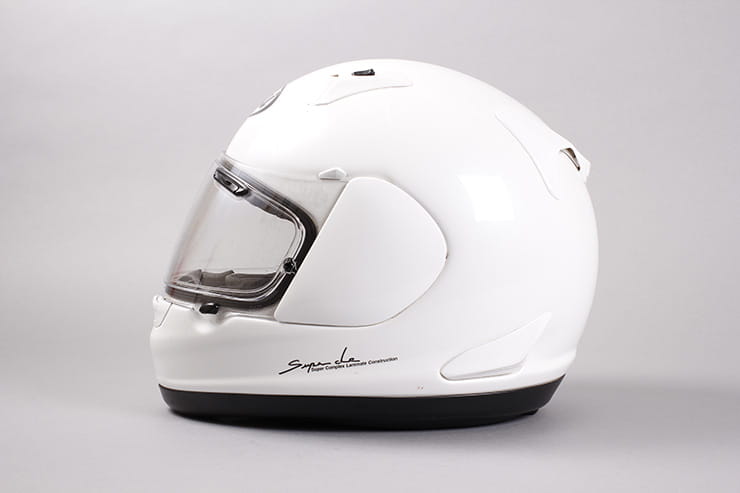 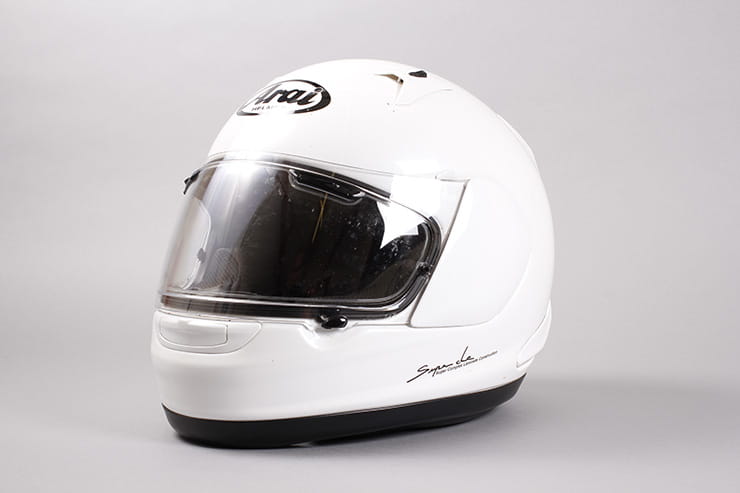 The first helmet I ever bought was an Arai, back in 1996. I couldn’t really afford it, but my mate encouraged me to try one after I found other brands weren’t as comfortable on my head. 21 years later and my head shape seems to suit more manufacturers, but now on my fifth Arai, it’s still one of the most comfortable things I put on my head.

I recently reviewed the Shoei Neotec, saying that if I could only have one helmet, it’d be that one; as I’ve got older, I’ve appreciated the convenience of a flip front. Arai doesn’t make one, and is famous for not budging on many of its design principles.

I’ve had this full-face lid for almost four years, using it everywhere from Scotland to California.

The ST has a slightly longer design than the original Quantum, the outer shell using Arai’s ‘Complex Laminate Construction’ – three layers of fibre, the middle one being ‘exclusive to Arai’.

The design maintains the typical style of the Japanese company in that the helmet looks slim when viewed from the front. It also creates a shape that gives very little drag in use, even on an un-faired bike – some lids can pull your head back when looking to the side or performing a life-saver – the Quantum ST feels very comfortable on everything I’ve tried it with, from my KTM 1050 Adventure on Midlands back roads, to the new Honda Fireblade at 170mph on Portimao circuit.

This white lid has a lovely metallic sparkle, but it’s a shame that the paint seems slightly more susceptible to stone chips than my other helmets. It’s used a lot at high speed, so it gets more punishment than my others, but there are three or four chips around 1mm in diameter.

Rated four stars by government-sponsored testing house Sharp, the Quantum ST only loses out on the maximum score due to a tiny drop in performance on the left hand impact test (bizarrely, not the right).

My medium lid weighs 1646g, which compares to 1332g for the super-light carbon-fibre Shark Spartan, or 1691g for the Shoei Neotec. 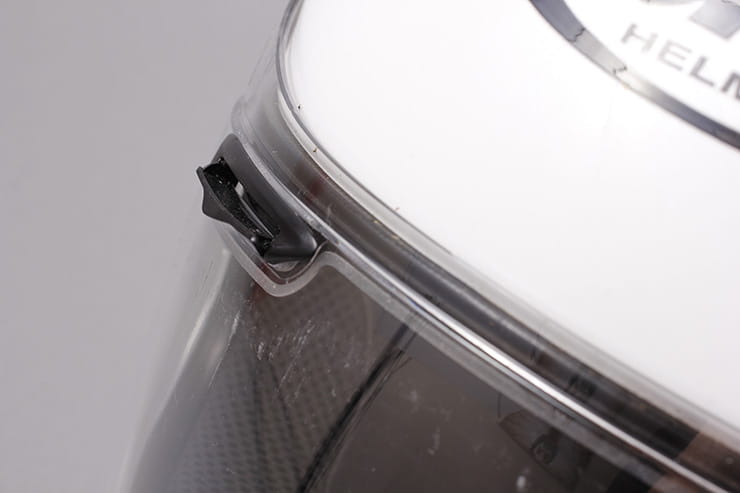 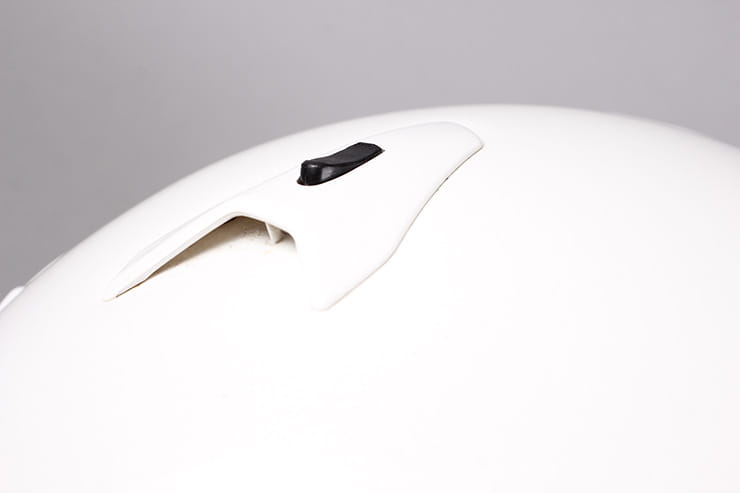 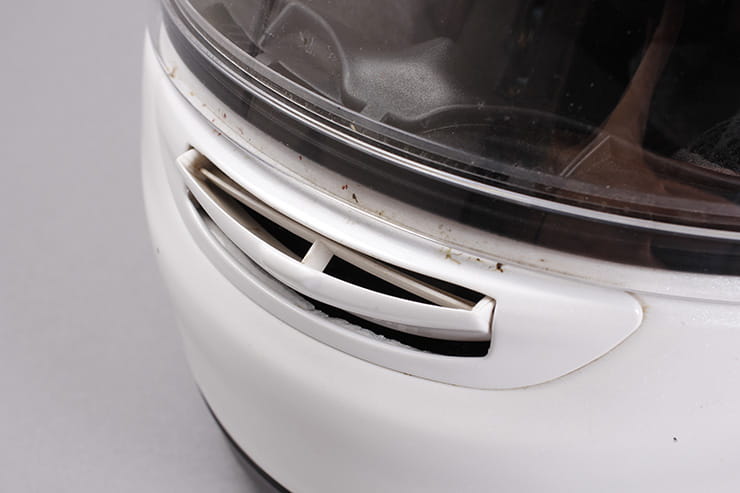 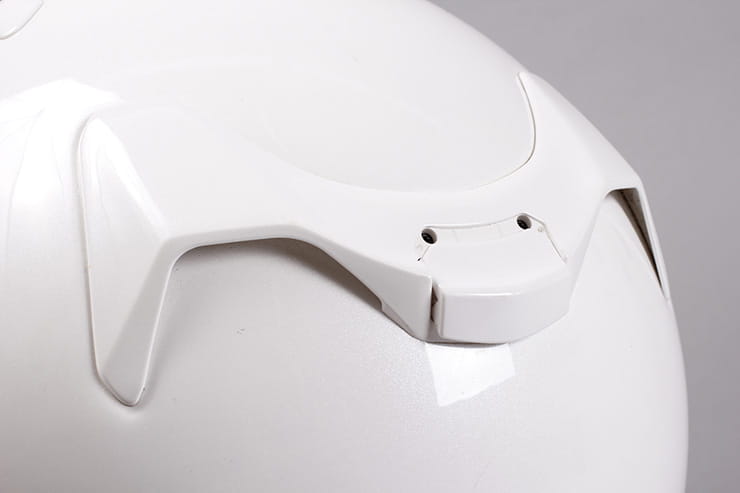 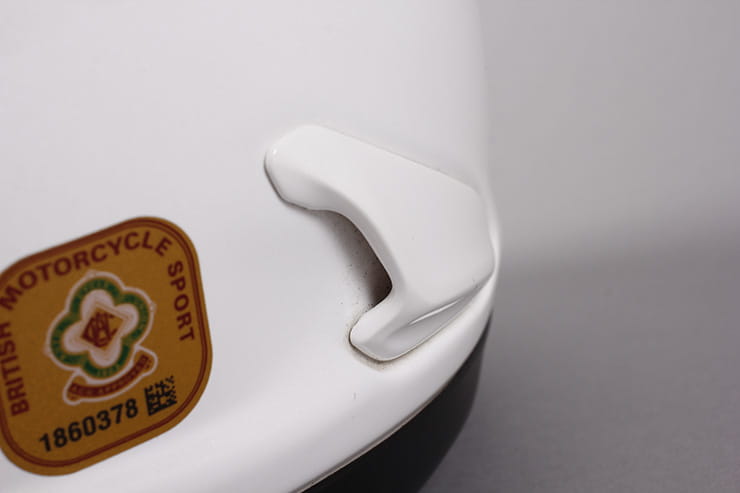 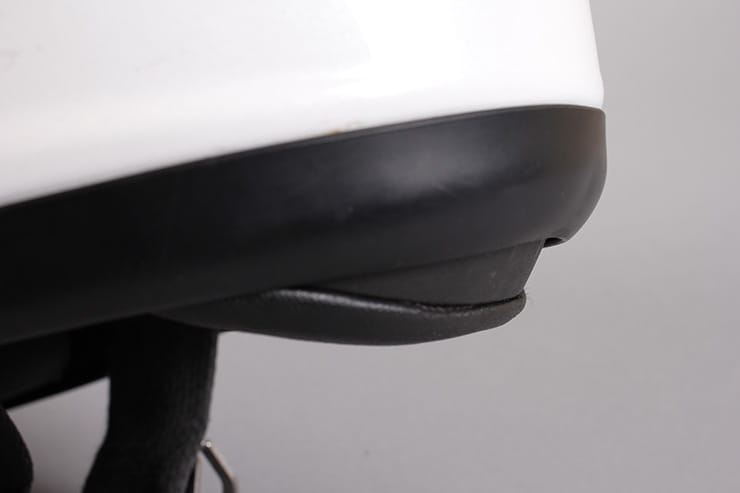 With everything shut, on a naked bike like the GSX-S750 it’s possible to feel a little air movement above the cheeks, but it’s never uncomfortable. In winter a neck tube would help, though the pull-down chin skirt deflects a bit of the wind.

The small thumb catch on the left of the visor allows it to be cracked open yet stay secure, so I rarely suffer a problem with my glasses fogging, and it’s welcome relief in very hot weather. 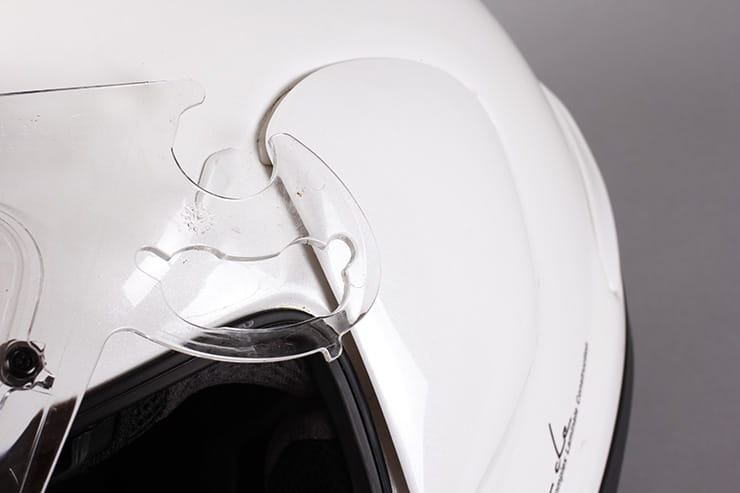 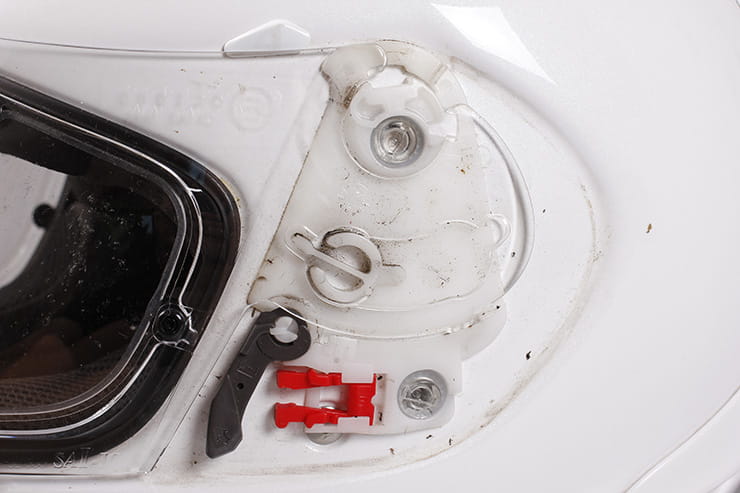 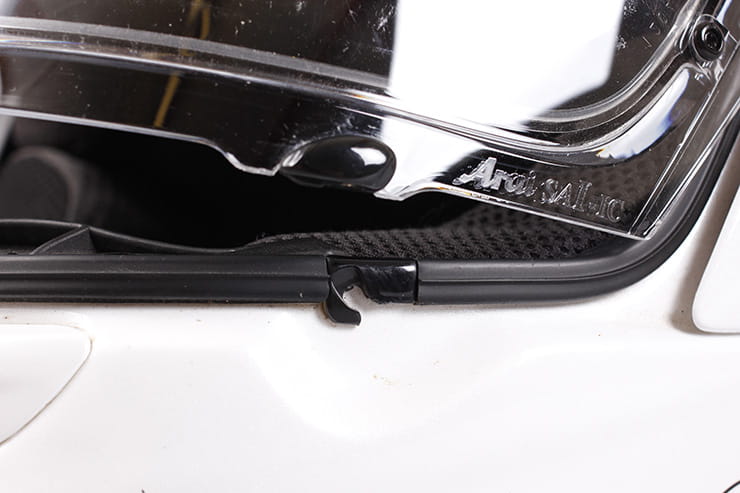 Nothing divides motorcyclists like the Arai visor mechanism. Some find it too fiddly, but I’d argue that they simply need to read the instructions. I love it – I can remove and replace the visor with the helmet on (not that I can imagine many times you’d need to), and have never had any issues with parts popping off or breaking, besides one side pod that suffered a broken clip after seven years – well past any helmet’s recommended life. It really is quick and simple to do, especially with the small levers that pop out on either side.

Arai is in the process of updating its visor design – I’ve yet to try it, but while some claim it adds complexity, I expect it’ll be another matter for personal preference.

My main reason for believing in this system is the smooth motion from top to bottom – no ratchet means you can park the visor anywhere you want, and it doesn’t shake your head as it’s opened. Of course, at higher speeds it won’t stay in position, but the thumb catch locks it securely fully closed or cracked.

This catch is one of my few gripes – it can be a little awkward to unhook, particularly with thick gloves when using your right hand if you’re holding the clutch in at the lights. I’m used to it, but it’s also something that’s changing in many of the new Arais coming out in 2017 and 2018.

What’s not changed is that the company still refuses to fit a drop-down sun shield, which doesn’t bother me at all. I prefer to use a dark visor, carrying the clear for if the weather changes. I don’t like adding layers of plastic to look through, and also find the bright band at the bottom of most sun shields to be distracting. It also means the front of the helmet can be designed closer to your forehead, so there’s less obstructive overhang when your head’s down near the tank and you’re looking out of the tops of your eyes.

The ST has been replaced by the ST Pro, which includes Arai’s ‘Pro Shade System’ – it’s a drop-down shield that goes over the outside of the visor. I’ve yet to try one, but user reviews indicate it’s a success if you like the idea of having a peak on your lid when it’s open.

A large Pinlock is supplied, which recesses into the visor and prevents misting. 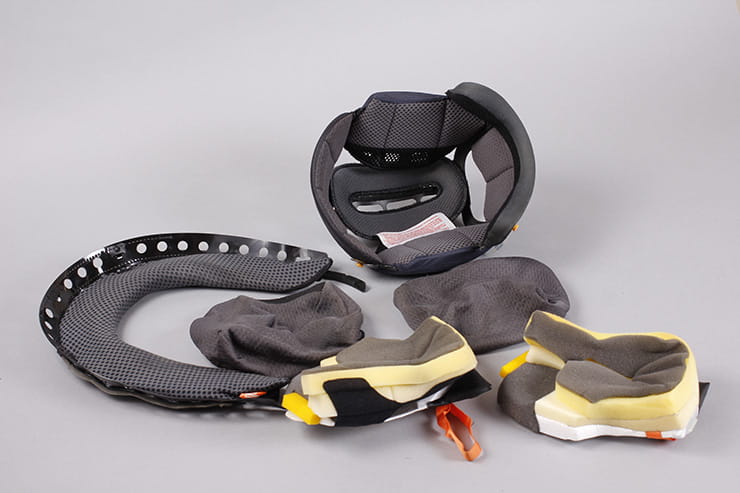 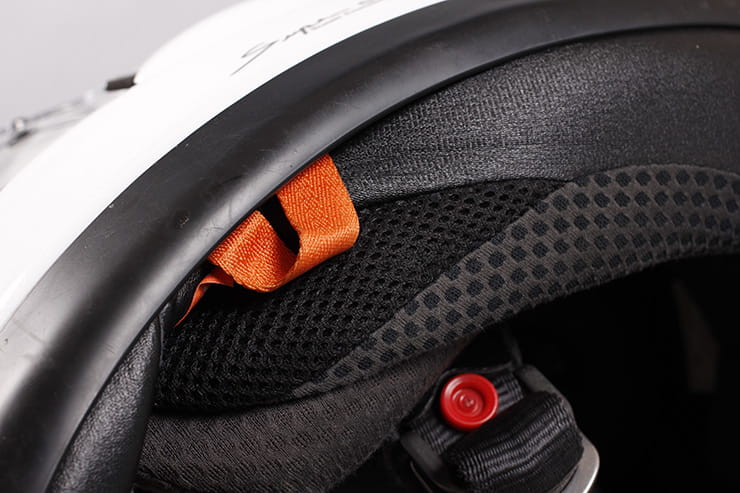 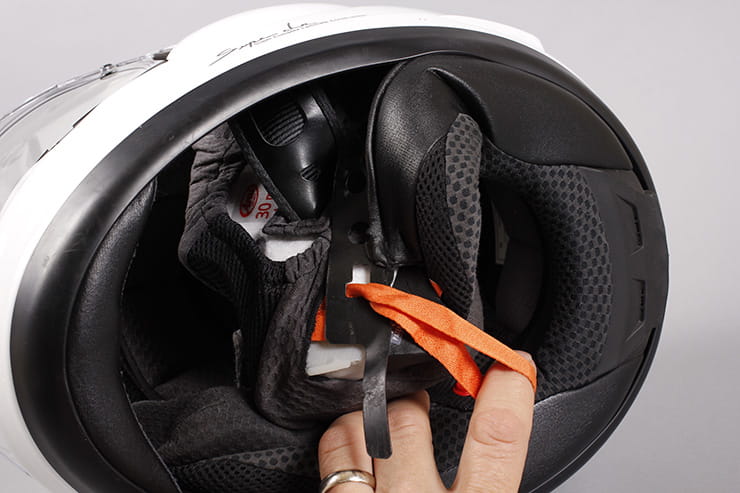 The fully removable lining is extremely comfortable and wears well, even after several machine washes. I’ve sweated heavily in this lid, but have had no problems popping the lining in the helmet bag and washing it a 40°. The cheek pad covers need peeling off, and are a little bit of a faff to get back in place, but you’re unlikely to be needing to strip them too often.

Two orange tabs allow emergency responders to remove the cheek pads while the Quantum’s on your head, making it easier to lift the shell clear. These aren’t very clear, and while there are small tabs saying ‘To reach emergency tab pull here’, they’re hidden from view. 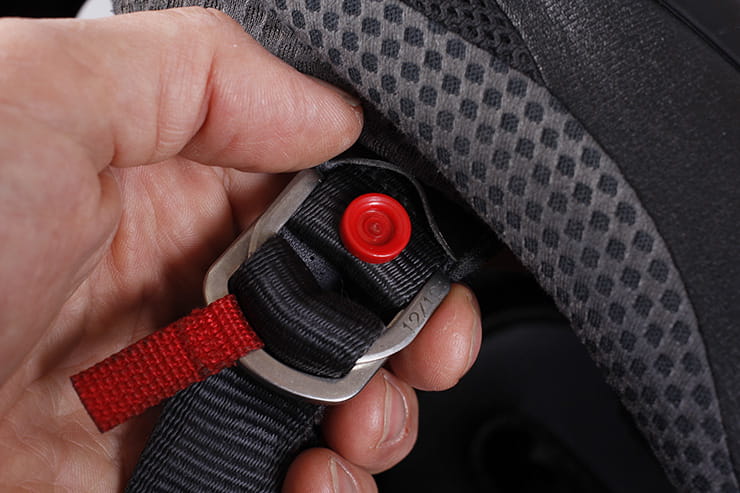 A stickler for tradition, Arai has stuck with the double-D fastener. While this is hard to use with gloves on, it does give a very reliable fit every time it’s used, which is why racers prefer it. The strap wears extremely well, and clips out of the way to prevent the end flapping.

Comfort is subjective so you must always check any helmet before you buy, but I’ve found every Arai I’ve worn to be incredibly comfortable, with no pressure points at all.

I wear glasses, which fit easily within the helmet, while the cheek pads are recessed to create space for intercom speakers. These could be fitted behind the lining if you prefer. 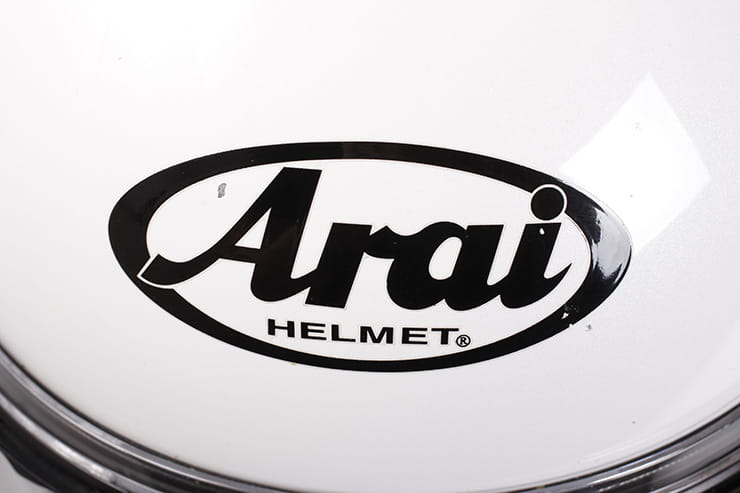 For any journey of more than about ten miles, I wear earplugs with all my helmets. Even the unique Vozz – one of the quietest lids I’ve worn.

I consider the Quantum ST to be no more noisy than most other’s I’ve tried, unless all the vents are open, but great ventilation usually comes at the cost of noise.

Arai has something of a following with many riders – those who own one seem to stick with the brand, and it’s no surprise; I find these lids to be extremely comfortable, and (despite the paint chips on this one), they’ve proven very well made.

The visor change mechanism might put off some cack-handed riders, but I honestly prefer this design to anything else I’ve used, and value not being constrained to a ratchet. Great fit, superb ventilation and a considered, effective design; when I know I’m going to be riding flat-out, I pick my Arai.