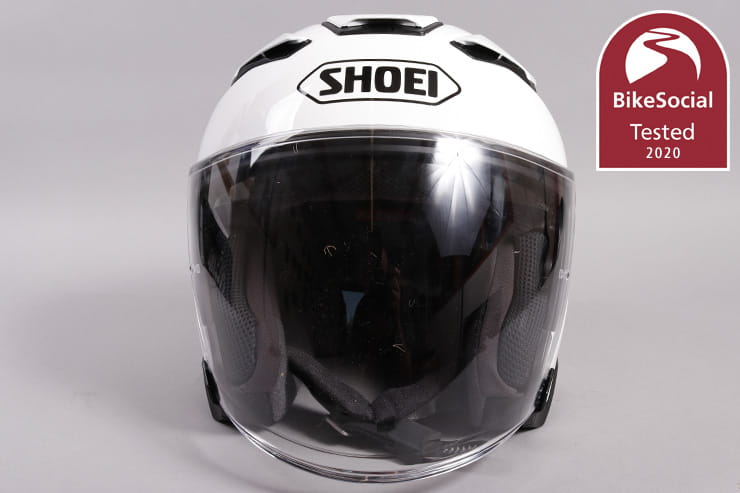 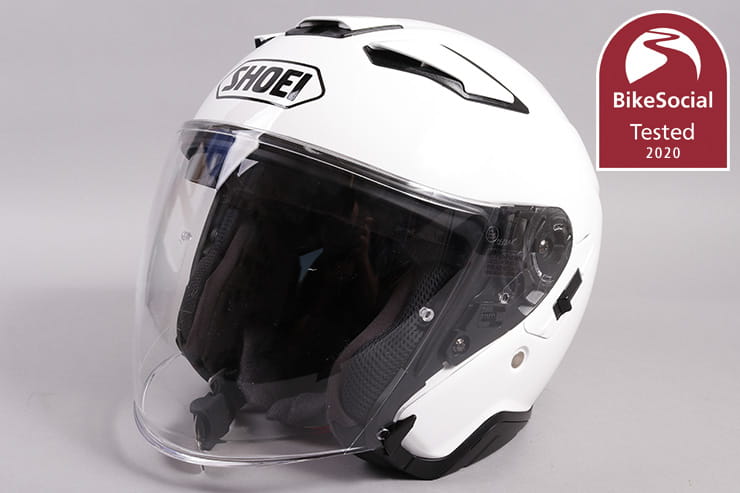 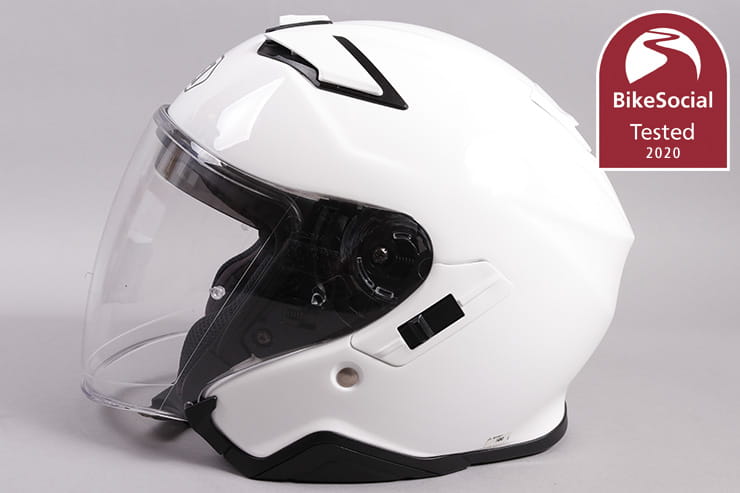 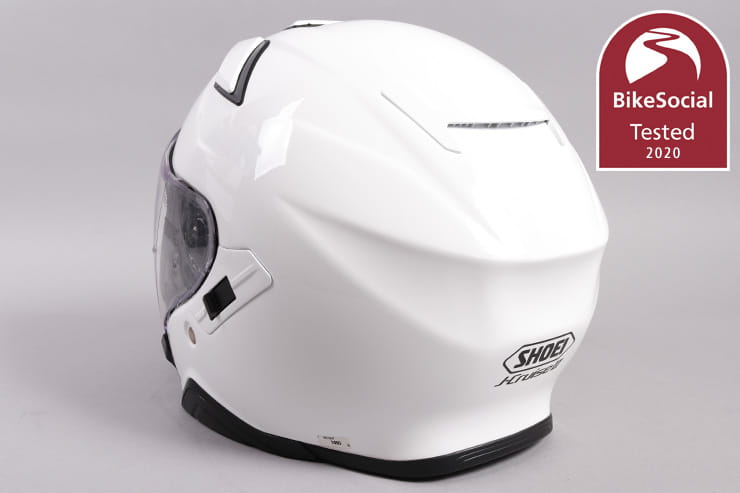 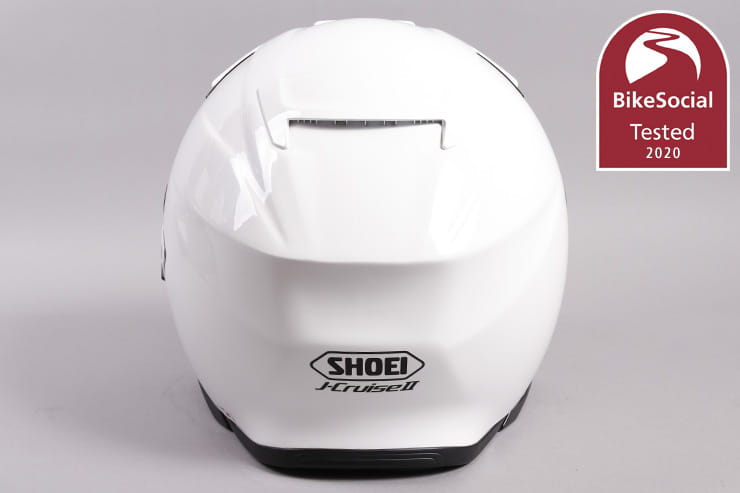 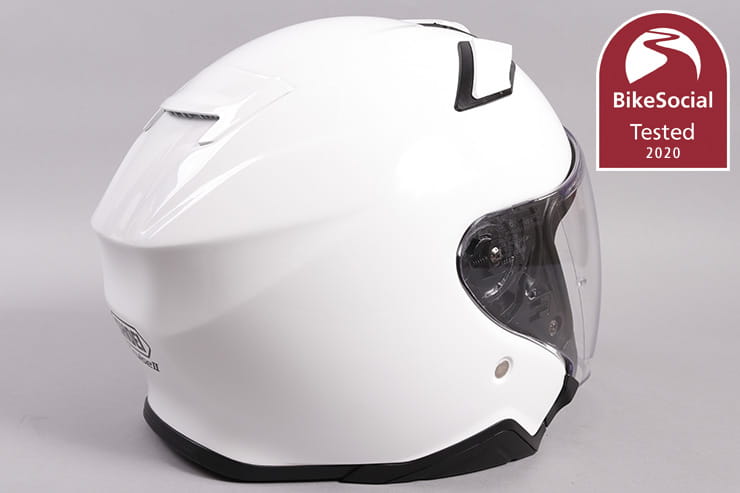 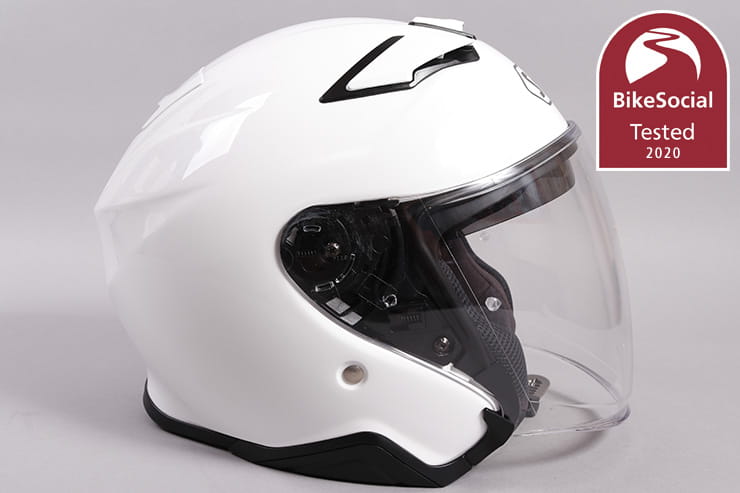 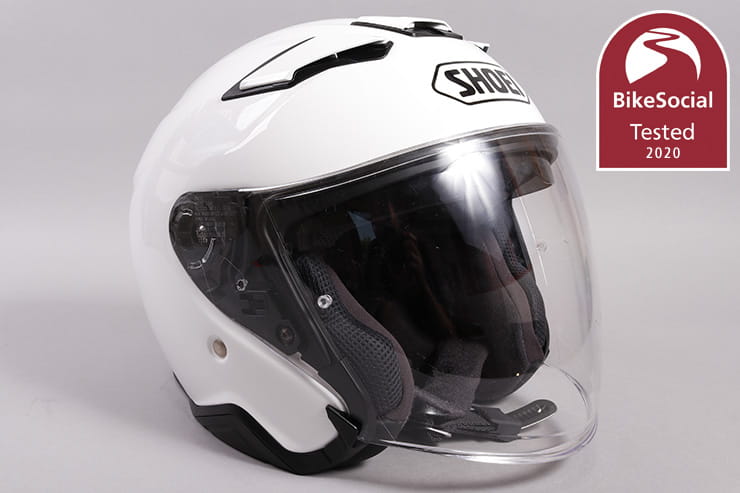 I've managed to rack up just shy of 1,500 miles with the Shoei J-Cruise II helmet, riding a variety of bikes from our long-term test Suzuki Burgman 400 to the Harley-Davison Fat Boy, Honda's CMX500 Rebel, Royal Enfield Interceptor 650 and my own Ducati Scrambler Classic.

Shoei's J-Cruise II helmet uses the same AIM (Advanced Integrated Matrix) shell construction as the rest of the Shoei range, including the full-face GT Air II which shares many of the J-Cruises styling cues, as well as the QSV-2 internal sun-visor.

Comprising a mixture of organic and glass fibres, the AIM construction provides a strong yet flexible shell while maintaining a lightweight structure. The Cruise II is available in three shell sizes and a range of colours and finishes, from the entry level gloss white, tested here, through satin metallic solid colours and range topping graphics strewn models for the more extroverted among us. Prices range from £429.99 for base white and black to £449.99 for Matt colours up to £519.99 for those with graphics.

In keeping with the GT Air II, the J-Cruise II has interfaces designed specifically to fit the Sena SRL Bluetooth intercom system, which is available separately.

Despite the lack of a chin bar and the usual ventilation systems housed therein, the Shoei Cruise II weighs in at 1450g, a 200g increase from the outgoing J-Cruise model, and more than the GT Air II full-face helmet on which much of the design is based. Some of this weight is down the full-face visor which weighs is at 190g, but the rest of the weight reflects how much work Shoei have done to make the Cruise II more than just an open face helmet.

This additional weight is unnoticeable in use but does give a reassuringly 'premium' feel to the helmet that has been missing on some lower priced helmets that I have worn. 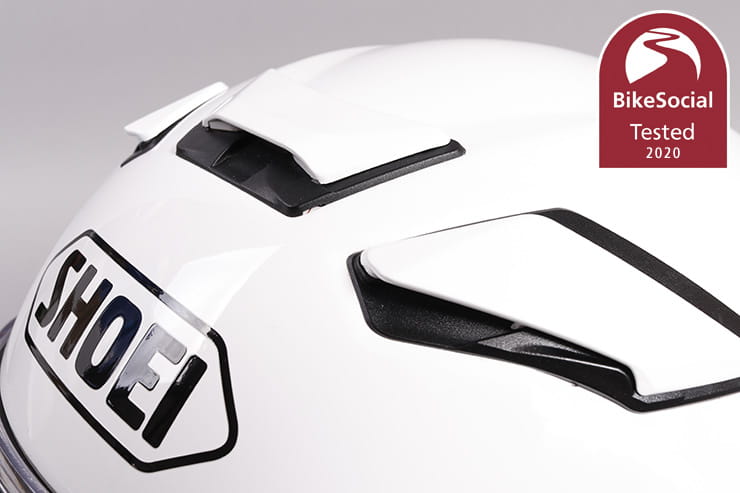 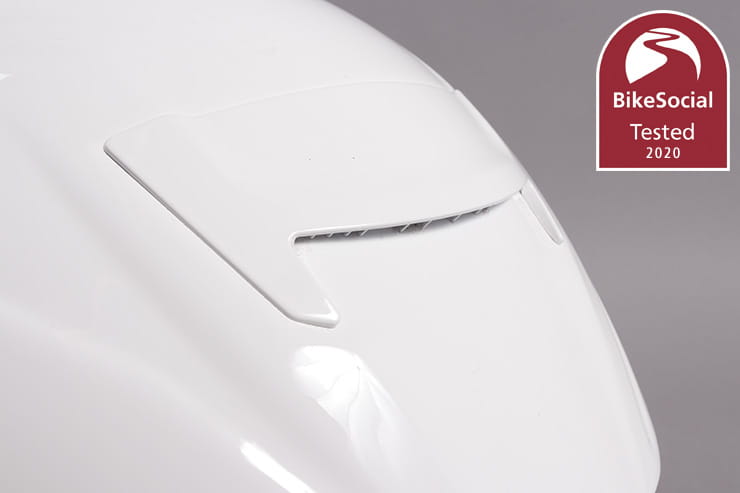 While the idea of additional ventilation on an open-faced helmet may seem like overkill (I certainly did before wearing it), you soon realise that it's just as essential as on any full face helmet.

With the full-face visor in the locked down position, I was amazed at how little air entered the helmet from underneath, and on warmer days I was soon reaching for the large and easily accessible top mounted vents to get some air flow though the lid. On colder mornings, the visor is quick to mist when fully closed. This would be solved with a pin-lock insert, which surprisingly was not included with the helmet.

The three top vents have a three-position slide action – closed, open and a mid-point. On the move, they work very well at providing a strong flow of air through the helmet, working in conjunction with the rear exhaust vent. 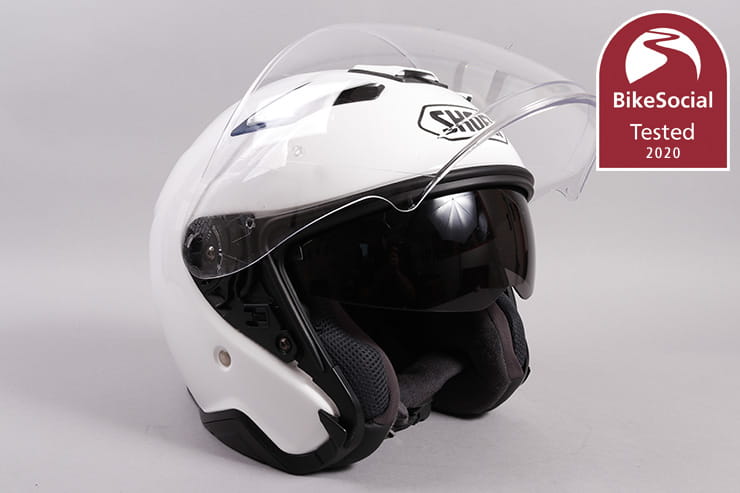 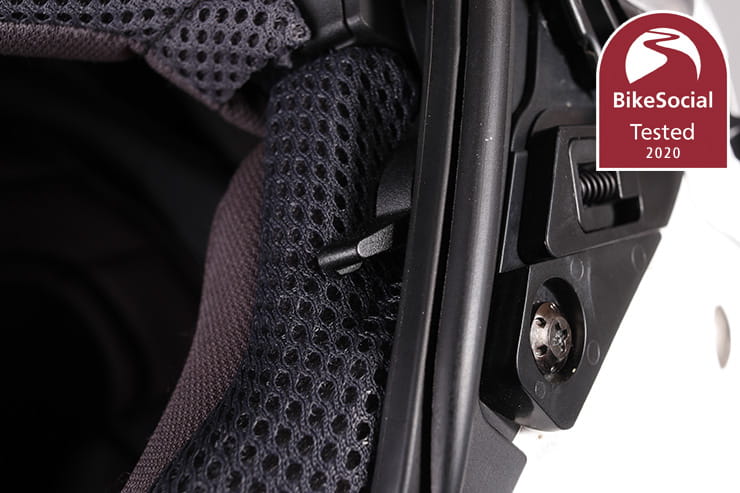 The large CJ-2 outer visor has three position detents – fully closed, fully open and a position which is best described as four-fifths closed, which is useful for slow speed use and avoids the above-mentioned visor misting. When closed, the left-hand bottom corner of the visor (which has a circular detent) locks onto a corresponding peg on the cheek of the helmet. Raising the visor when locked down requires outward force to 'unhook' the peg. It sounds more complicated than it is in practice, and soon becomes natural.

The visor is easily changed with a simple lever on each side which, when fully open, releases the visor's pivot mount. A range of visors are available for the J-Cruise II including clear (as shown), light and dark smoke (not legal for road use in the UK) and for that retro-vibe a smoke mirror finish (also not UK road legal).

All main visors are equipped with Pinlock mounts for, but unfortunately not supplied with, a CJ-2 Pinlock Evo Insert. If you are thinking of upgrading from the J-Cruise to the J-Cruise II, it's worth noting that the same Pinlock insert is compatible with both helmets.

The inner, retractable sun-visor (QSV-2) is shared with the GT-Air II full face helmet and provides a 5mm larger shaded area than the outgoing J-Cruise helmet. This goes some way to avoiding the bright halo effect that plague some helmets with a drop-down visor, though fit is important to ensuring that this is minimised as there is still a significant gap around the bottom of the visor. The inner visor is also replaceable and is easily removed. Two levers positioned between the shell and the cheek pads lock the visor in the lowered position, allowing the mounting clips to be carefully opened and the visor removed. The inner visor is available in dark smoke (as tested) or yellow, for enhanced contract in low light conditions.

The visor is raised and lowered by a side-mounted slider which, while large enough to operate with winter gloves, isn't quite positioned where you would expect it. Even after a nearly six months and over a thousand miles of use, I find myself feeling around for the lever.  Once found though, the visor is raised and lowered (the slider operates in reverse to the visor – lower the slider to raise the visor) with a smooth and easy operation and I found no issues with wearing glasses under the visor. 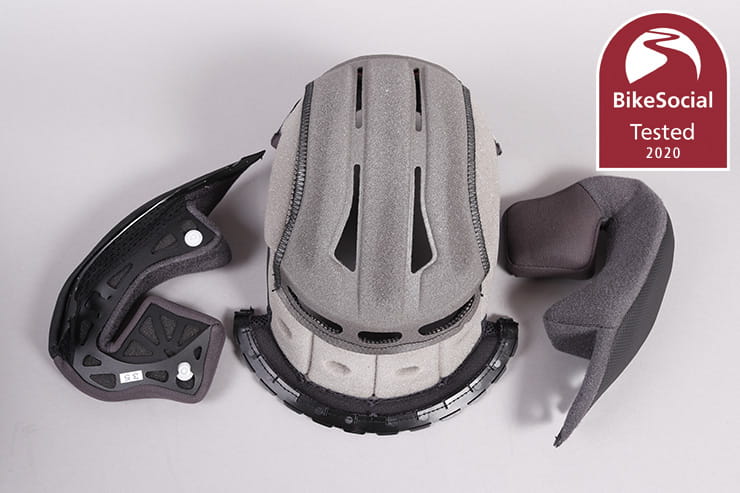 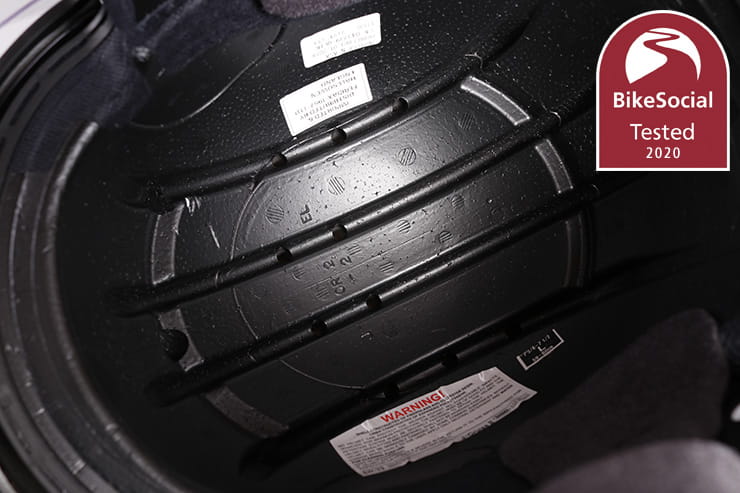 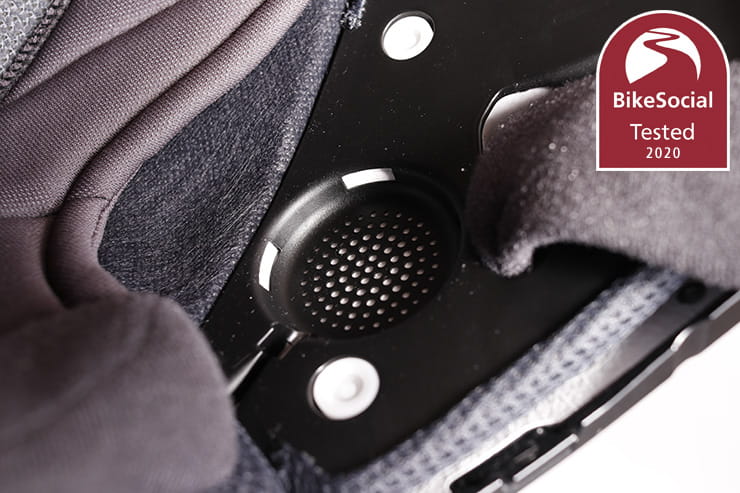 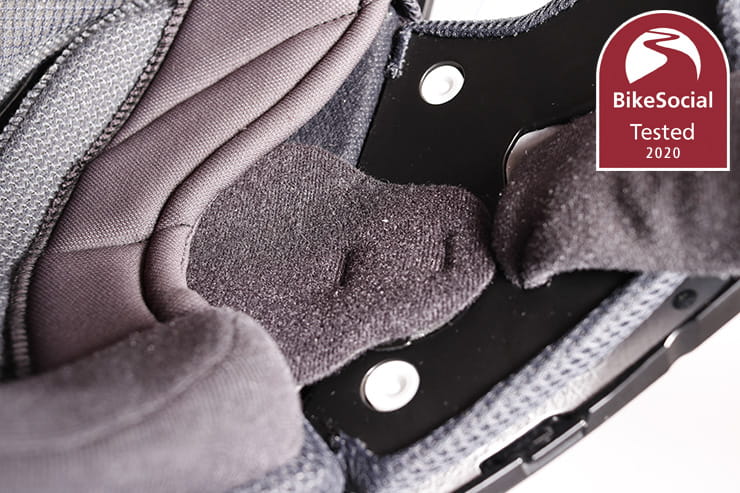 The lining is really where the Shoei J-Cruise II excels and reflects its premium price point. The cheek pads and skull cap are easily removable from the J-Cruise II using both press studs for positioning, and hidden tabs along the edges to ensure a snug and clean fit around the neck skirt. Each lining element is made of a combination of smooth silky woven fabric for the high friction areas, fleece for warmth and comfort in areas that are likely to be exposed to airflow (the back of the neck and the cheek pads), and waffle weave for the skull cap allowing increased air flow and cooling. The lower surfaces of the cheek pads are finished in a water-resistant vinyl like material to prevent the liner from wicking water up from the base when worn in driving rain. Finally, the strap is sheathed with a removeable fleece liner which is held in place with press studs. While fiddly to remove and replace, at least these can be washed when needed.

As removal of the helmet in emergencies is easier than a full-face helmet, there are no quick release cheek pads in the J-Cruise II. 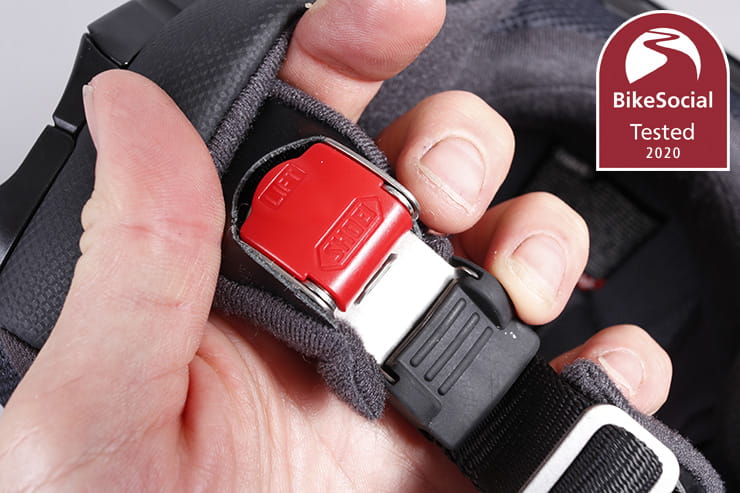 The Shoei J-cruise II is fastened with a micro ratchet fastener allowing five adjustment positions. Further adjustment is possible via a standard strap adjustment slide on the chin strap. The release tab is simply lifted to release the strap, in the same way that aircraft seat belt releases and is easy and quick to use, even when wearing bulky winter gloves. This fastening method takes a bit more setting up compared to a traditional double D-ring, but once done, makes for much quicker and easier fastening while still allowing a range of adjustment should you wish to wear buffs or balaclavas under your lid.

Fit is very subjective and you should always try on a range of helmets before making your choice. This is especially true with the Shoei J-Cruise II where the combination of a deeper shell and the thicker brow (housing the internal visor) meant that I had to go up a size from my usual Medium to a Large.

Due to the compound curves and chin spoiler on the large visor, when down, the Shoei j-Cruise II is very quiet – surprisingly so for an open face helmet. Naturally when open, or partially open, there's a fair amount of wind noise as the visor mechanism and interior of the helmet are exposed to the airflow. I did notice a small amount of noise from the internal visor adjustor slider mounted on the left side of the helmet, but I'm really nit-picking now. I always wear earplugs when riding and made no exception for the J-Cruise II.

I'd always dismissed Jet helmets as only being for scooter riders but I have to say that my opinion was totally changed by the Shoei J-Cruise II, which has quickly become my first-choice helmet when I'm out and about - no matter what bike I'm riding.

Clearly it's not  going to be a safe as a full face helmet and, for example, wouldn't be allowed on track days, but for the majority of daily riding this is great choice of helmet and well worth trying if are looking for a change from the norm.