What are the best motorcycle earplugs? How to protect your hearing 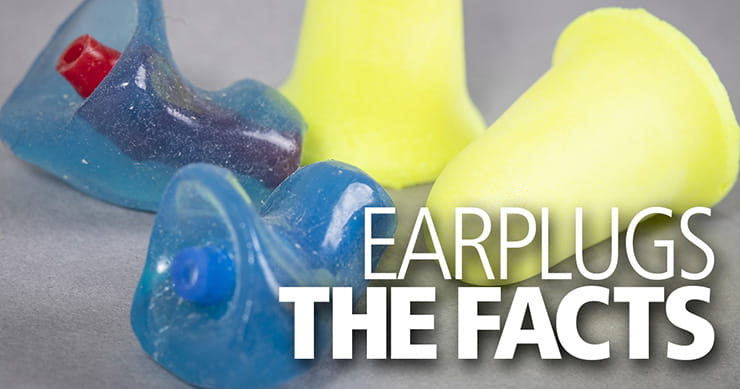 When I’m out with my mates I struggle to pick up on what they’re saying as well as I used to, and as I write this article I have a gentle hissing in my ears; it’s there all the time, and it’s because I haven’t always worn earplugs since I bought my first motorcycle in 1996 (I do now).

We’re going to look at the science to make sure you don’t end up permanently damaging YOUR hearing and ask what are the best earplugs?

Can riding a motorcycle damage your hearing?

According to the Centre for Disease Control and Prevention, a single exposure to a very loud noise, or repeated / longer duration of high volumes can permanently damage your hearing. 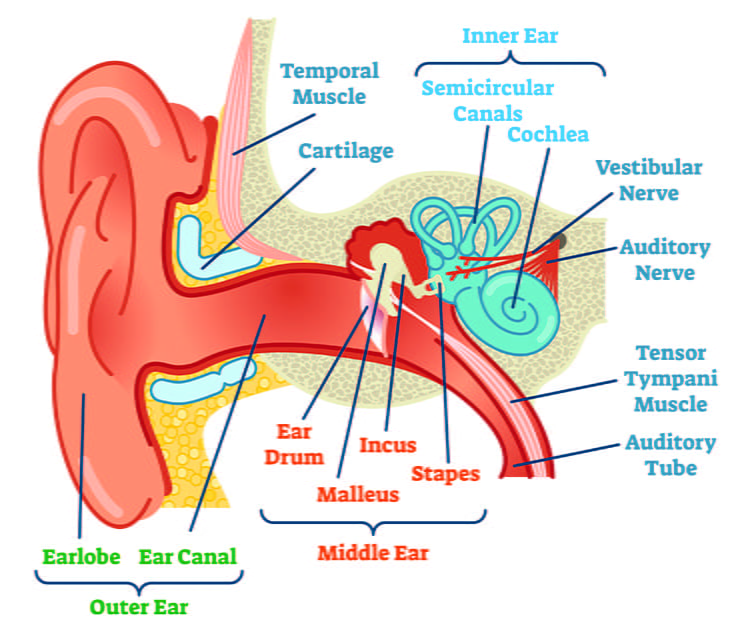 The ear has three parts – the visible outer (pinna) and external ear canal, which channels sound vibrations into your ear. Then there’s the middle ear, which has the eardrum and the body’s three smallest bones (the malleus, incus and stapes) to boost the vibrations, along with the stapedial reflex – a ligament that helps to reduce the volume of loud sounds.

Loud sounds can overwhelm these hair cells and cause them to die; as human’s can’t regrow them, repeated exposure will gradually – and permanently – reduce your ability to hear.

The auditory nerve can also be damaged by noise, making it harder to understand speech, especially in busy environments.

Image from Centre for Disease Control

The British Tinnitus Association explains that permanent hearing damage comes as a result of a ‘dosage’ of noise exposure, comprised of the volume of the noise and the duration.

Regulations in most countries around the world agree that 85dB is the loudest sound that someone should be exposed to during an eight-hour working day – that’s about the same as a blender – but because for every 3dB increase in volume the sound intensity is doubled, your exposure time should be halved. If a worker was in an 88dB environment, they shouldn’t be there for more than four hours. 91dB and they can only deal with two hours… 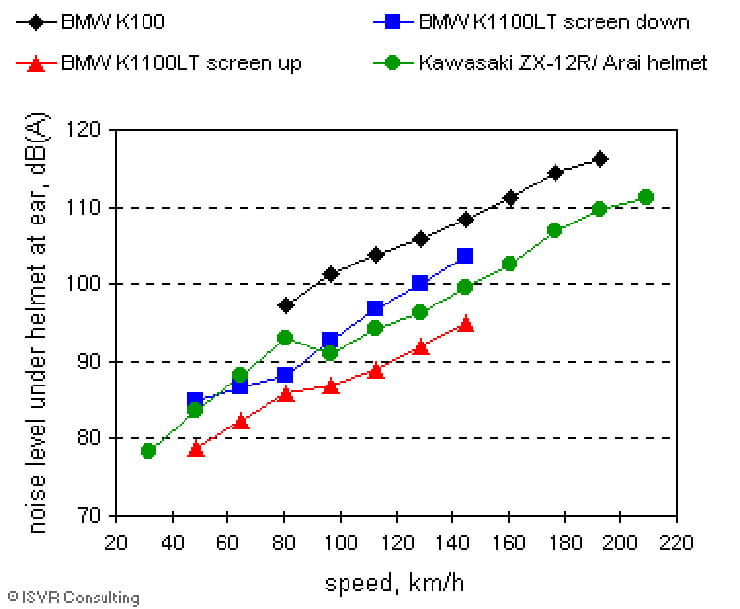 A study by ISVR Consulting at the University of Southampton found that at speeds above 40mph, wind noise can exceed the noise of the motorcycle itself. By working with police riders, they discovered that bikers are exposed to anything from around 85dB at 40mph to 106dB at 70mph. At 125mph, noise levels reached 115dB.

If you only ride a scooter in the city and have a decent helmet, your hearing is unlikely to be damaged as 85dB can be safely endured for eight hours. But jump to 94dB (50mph on a ZX-12R) and your safe exposure time drops to around 1 hour.

Riding a BMW K100 at 70mph generates around 106dB – a level of noise that the Tinnitus Association says has a maximum exposure time of just three minutes and 45 seconds. 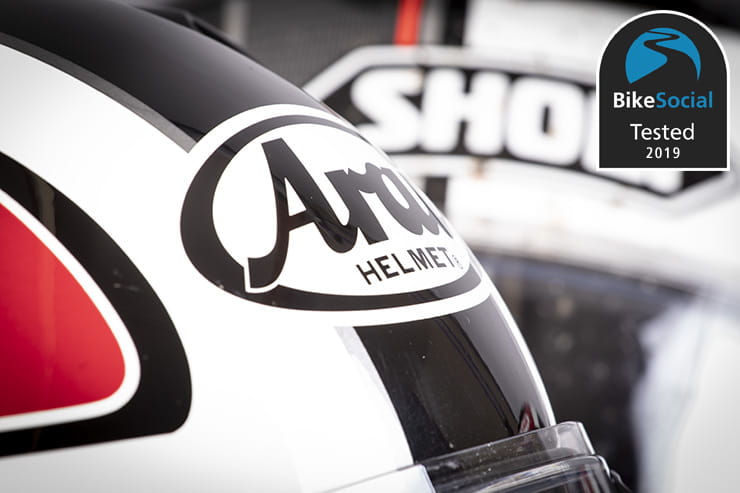 My helmet is very quiet, do I still need earplugs?

The best helmets are developed in a wind tunnel to reduce drag and noise levels as much as possible, but as ISVR Consulting found, the design of the motorcycle has a huge impact on the noise levels a rider is subjected to; the wake from a screen contributes a lot, as anyone who’s stood up into the ‘clean’ airflow while riding will know.

Your helmet might be quiet in a lab environment, but having tested Schuberths, Arais, Shoeis and many more on a variety of bikes over the years, I’ve never worn anything that eliminated the need for earplugs.

Is it dangerous to use earplugs if I can’t hear other traffic?

Earplugs are designed to remove the deep tones of wind noise, but still allow as much speech and other sounds through as possible. It’s inevitable that you will hear less with something plugging up your ear canal, but if you don’t wear earplugs, it won’t be long before you can’t hear anyway.

The Health and Safety Executive states that ear protection that reduces sound levels to below 70dB should be avoided, as it may cause difficulties with communication and being able to hear warning signals. An ambulance siren in the UK is approximately 104dB at 1m in open air – that’s around the same as the wind noise, but it’s a much higher (and varied) frequency. At 25m, that siren will drop to around 68dB, while at 10m it’s 76dB. 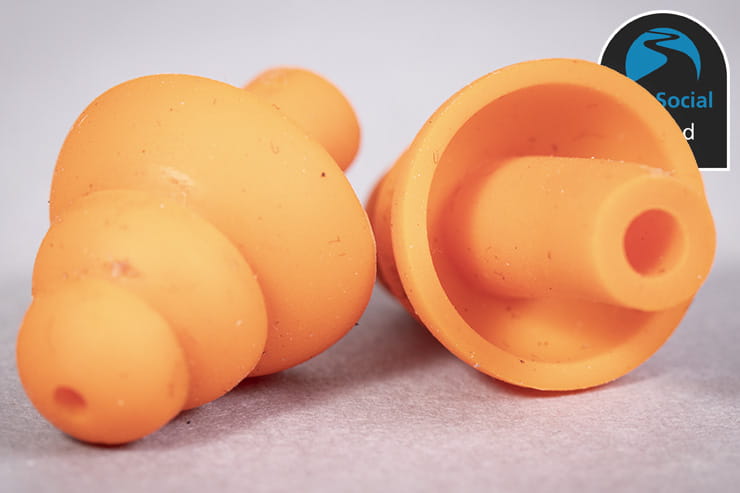 Some earplugs – like Auritech’s £19.99 Bike Earplugs – have a ceramic filter installed that allows clearer definition of speech and other higher-frequency sounds.

Incredibly, in 2014 Thomas Varsel received a ticket from the Ohio Highway Patrol in America for wearing foam earplugs while riding his motorcycle, because as shown on the American Motorcyclist Association state law database, they’re prohibited. But riding without a helmet is perfectly legal in Ohio.

Some states – like California – will allow any earplugs as long as a siren or horn from another vehicle can be heard, while in Maryland you can only wear custom-made earplugs.

Fortunately, the UK has a far more common-sense approach. 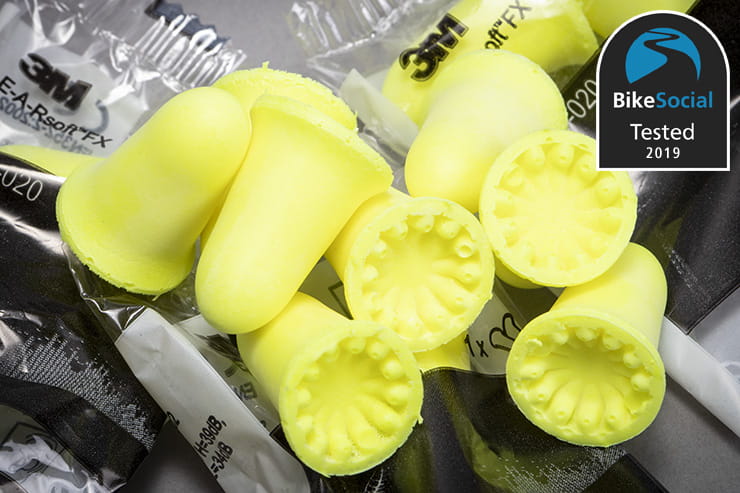 What are the best motorcycle earplugs?

Just as the fit of a helmet will vary from rider to rider, we all have different ears. To choose the right earplugs for you, I’d strongly recommend a Test Pack from Earplugs by Post – this small, family-run business might not have the most easy-to-use website, but for £10 you can get a selection pack of 20 different pairs to work out which are best for you.

Of the 49 different earplugs available from the site (also known as Lucy Dell Earplugs), the SNR values (Single Number Rating – an indicator of level of noise reduction) vary from 22dB, right up to 39dB for the 3M E-A-R Soft FX. That’s very high (at 106dB, 67dB would get through), and could reduce your ability to hear emergency vehicles, but I’ve used them for a long time and found them fine, particularly on bikes with noisy screens; from experience I can say that I appear to be better at hearing emergency vehicles while wearing these earplugs than at least 50% of car drivers… 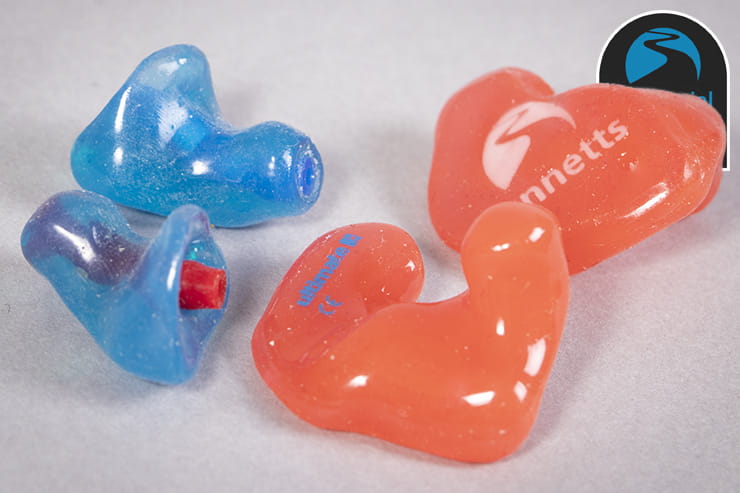 The definition of what makes a better earplug is a tricky one – comfort is subjective, and while the SNR on a custom plug is typically lower than some disposables, the manufacturers will often claim that their products are filtering the wind noise more than speech and other higher frequencies.

Fitting of the Auritechs is free if you go to its Guildford office, but look for offers from both companies at most motorcycle shows.

Custom earplugs can be washed and reused, but over time your ears change shape, so they won’t last forever – probably about four to five years. Disposable ’plugs should be replaced after each use, but we all use them longer than that; just be aware that they’re an ideal breeding ground for bacteria, so don’t leave it until they’ve turned black.

My experience of the Auritech custom earplugs is that they do cut wind noise well, and speech is clearer, but they’re not as isolating at speed as some foam plugs. The shape of my ear also meant that, when turning my head or opening my jaw, the seal would be lost and noise levels would momentarily increase. I know many people who swear by these, but after two moulds were made, they still didn't work for me.

Much better for my pinnas were the Ultimate Ear Squidgy Blockers – these were less prone to breaking seal when turning my head, but unless I got them in ‘just-so’ I’d still sometimes find noise getting through when opening my jaw.

While some foam plugs will make it quieter in your helmet, you won’t be able to chat to people as easily (and make sure you can hear emergency vehicles or car horns). On the other hand, custom ’plugs are expensive, don’t suit everyone, and need careful insertion and some maintenance.

Another option are filtered universal earplugs like the Auritech Bikers – which I’ve found good, particularly when using an intercom system that doesn’t have much power – or the Pinlock Ear Plugs. Just keep in mind that it’s particularly annoying to lose one of a £20 pair of earplugs, and that both of these are very fiddly to remove with cold fingers. My favourites are the EarPeace M plugs, which come with three plugs (in case you lose one), and a choice of three different filters. They're easier than the Auritechs to put in and remove, plus they seem to do a better job of filtering noise. You can you change the filters if you want to experiement.

Corded earplugs are an option that might reduce the chances of losing your earplugs, though I had the cord and clip that fastened the plugs to my jacket during my review of the Ultimate Ears and found that the sound of the cord flapping in the wind was transmitted into my ears, so had to remove it.

While some riders – like me – don't get on with custom earplugs at all, others find the foam versions keep popping out or are uncomfortable; “The shape of my ear canal means that custom plugs are my best bet,” says BikeSocial’s Kane Dalton. “I’ve had problems with my ears getting sore if the custom plugs aren’t made just right, due to the helmet pressing on them, but the latest pair of Ultimate Ears have been great. They come with a moisturising gel to make it easier to insert them, but it leaves a bit of a residue in my ear. I just lick them. I’d say they’re a good investment with a long-term benefit.” 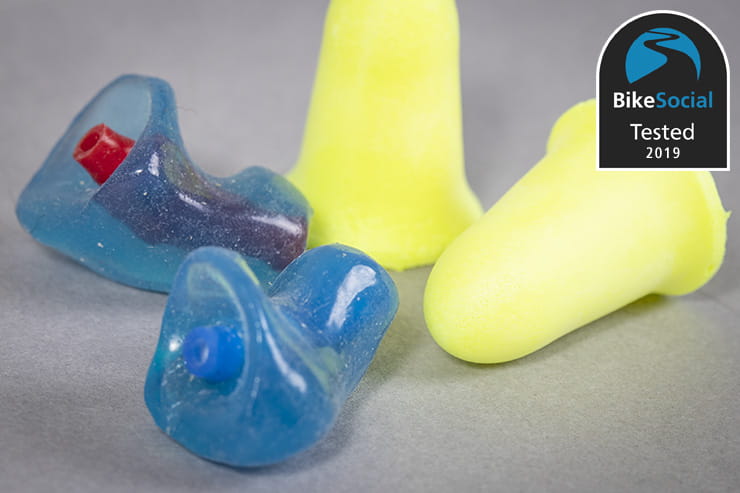 Of the 22 who responded, 18% wear no earplugs (one uses his AKG in-ear headphones for music, which will offer very little noise reduction yet need to be loud to be audible at speed).

Custom earplugs were popular with this sample set, riders commenting that the prices at shows were coming down, and that they can offer more comfort than foam plugs – one member has scar tissue in his ears that foam plugs press too hard against.
Whatever works best for you, hearing protection is essential for all but the slowest city commuters. I’ll leave you with Test Team member Dave Smith’s comment:

“I just wear disposable earplugs, but for the guys who don’t use anything; I genuinely have hearing damage caused by wind noise from bikes.

“A small ‘slot’ is missing from my audiogram in both ears that equates to the frequency of the wind noise. The decline in hearing is gradual and permanent, but the real kicker is that if you lose your hearing, you also lose the cognitive ability to understand sound in the affected frequencies.

“Despite now having a hearing aid, which does help, I still struggle with eff, ess, and shh speech sounds, so often miss-hear people.

“Wise up dudes, get some plugs in! Oh, and tinnitus is a bitch!”

How your hearing is damaged