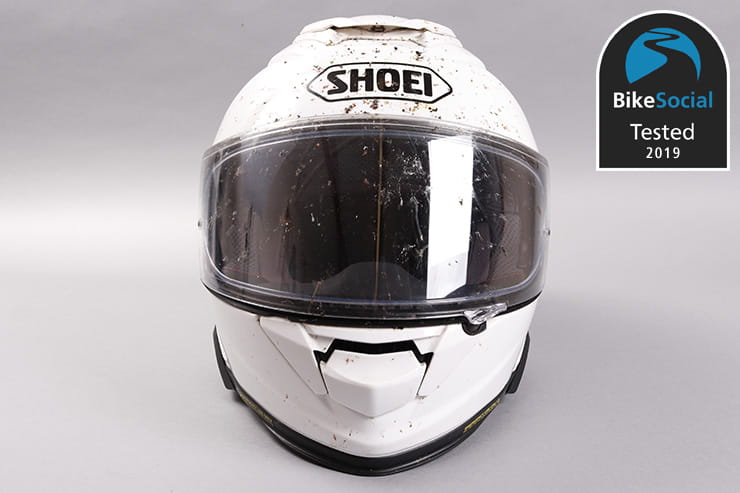 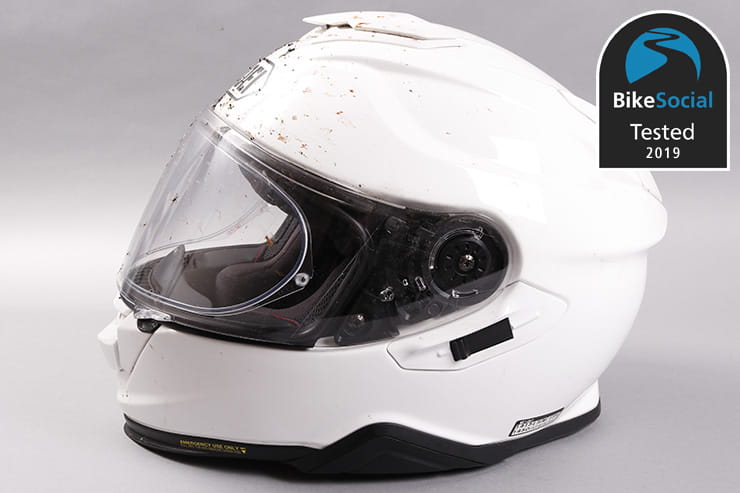 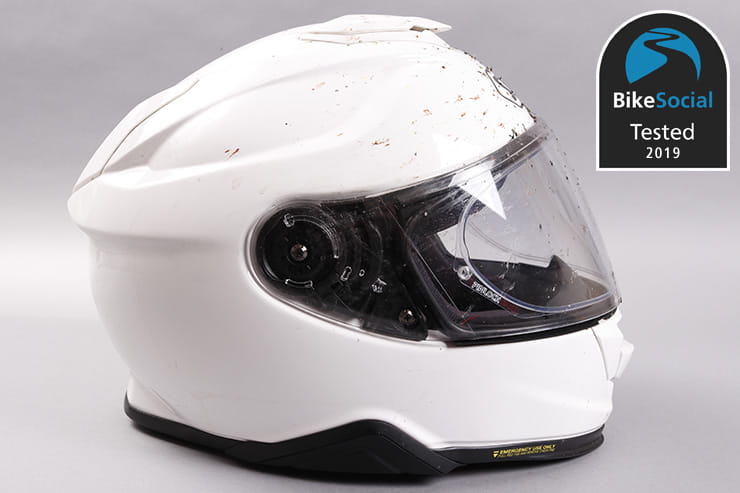 Shoei’s original GT Air was their first premium helmet not aimed at sports riders. A drop down sun visor brought convenience and judging by the number of them I see sitting on tables at bike meets, the UK riding public liked what they saw.

I used one last year and mostly liked it. Comfy like you expect a premium-price helmet to be, beautifully put together and all-the-more-safe because by being so comfy and easy to wear, the rider stays fresh and alert for longer. Shoei call this ‘passive safety’ and I’m a big fan. My issues with the original GT were that the drop-down visor was a bit small and didn’t cut out enough light. Plus, it misted badly when dropped down and took a long while to clear. Adding another layer of plastic to look through compromises optical clarity (a problem on all lids with a drop-down visor).

I was also disappointed with the venting on the original GT Air and found the revised visor change mechanism a bit more fiddly than the system it replaced. Despite all of that I still wore my GT Air as my number-one helmet for most of last year.

The biggest changes for the GT-Air II are a bigger sun visor and switch to a quick-release ratchet-type strap fastener, along with better noise reduction and aerodynamics, plus a ‘first position’ visor opening for enhanced ventilation and de-fogging. It is also built to integrate seamlessly with SENA’s SRL2 comms system.

There are three shell sizes available and six helmet sizes from XS to 2XL. Three different sizes of headliner and cheek pad are available and Shoei offer a free pad exchange service so you can get the perfect fit for you. 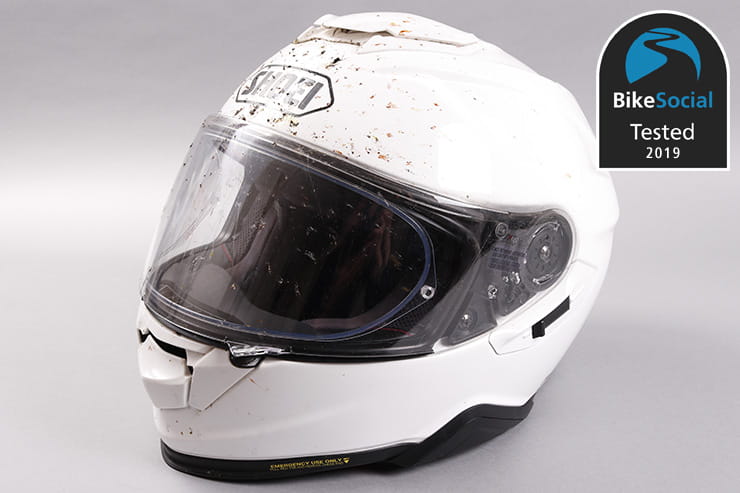 Motorcycle helmet design is a complex process. Getting the right balance between impact resistance, penetration resistance and elasticity (which helps disperse and disseminate the impact forces around the helmet) is a complex process. Shoei work hard to make their helmets both light and strong, but also quiet and aerodynamic too.

The GT-Air II looks a little like a fixed-front version of Shoei’s flip-front Neotec. Construction is hand-laid interwoven layers of fibreglass, carbon and resin, carefully put together to be strong, flexible and aerodynamic. BikeSocial’s Kane Dalton recently visited Shoei’s factory to watch their helmets being built. It’s an impressive process that focusses heavily on quality. Watch the video here

At 1350g the GT is 117g lighter than my previous GT Air and most Arai helmets. It is still noticeably heavier than a Shoei or AGV race helmet though. 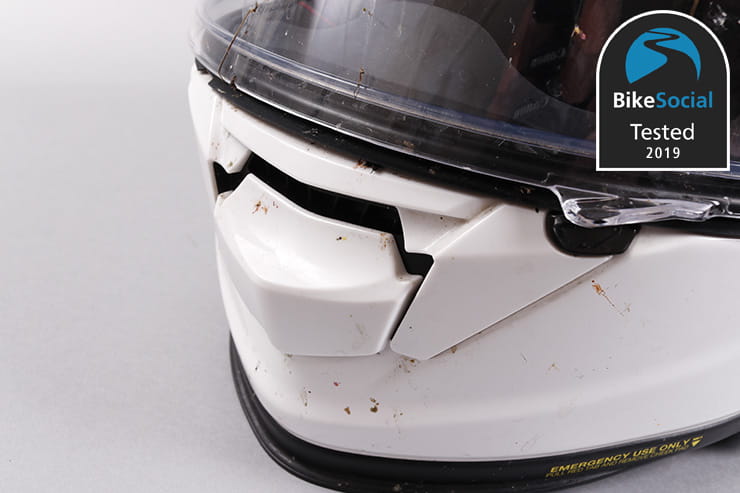 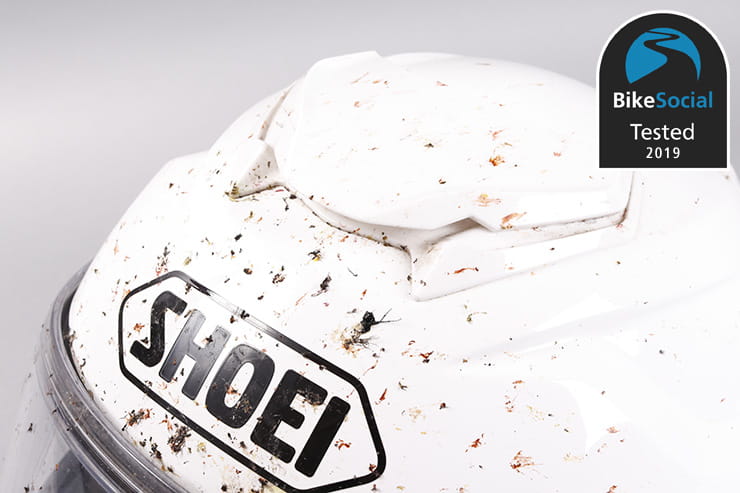 Big vents, easy to use in thick gloves, but not quite effective enough

The chin vent is slightly bigger than before and there’s a small click on the visor mechanism that allows the tiniest of air flows under the visor (and is easy to operate by accident when closing the visor – always check it’s properly sealed, especially in the wet). The top vent is also easy to use, but on this new version there are twin exhaust vents (permanently open) that replace the single exhaust on the previous GT Air. All are easy to operate even in thick winter gloves. Ventilation is ok, but not quite as good as my Shoei NXR on a long ride on a warm day. The rider stays comfortable, but there isn’t that feeling of opening the fridge door that I get with the NXR. 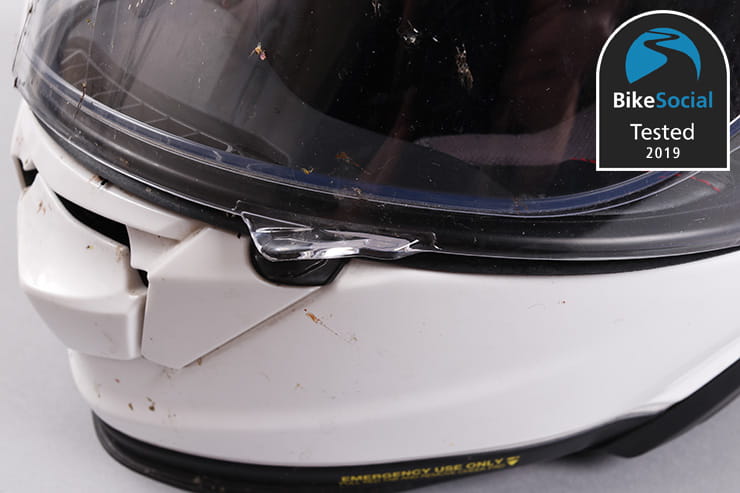 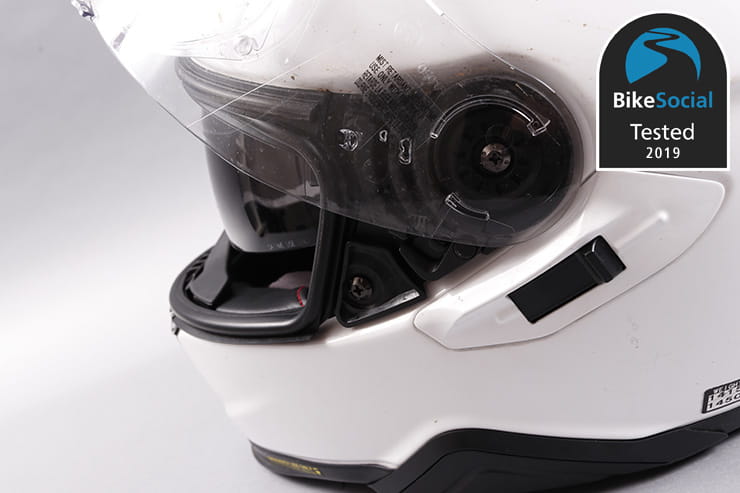 Visorchange mechanism is a bit fiddly and, oddly, the sun-visor lever can be hard to locate

There’s a wide field of vision and the EVO Pinlock anti-mist insert included, fits easily and works well. Visor removal is the same as the previous GT Air still feels like some small-but-essential piece of fragile plastic is about to break at the crucial moment. Shoei’s visor change mechanism used to be just as secure and much easier to operate – I’d be interested to know why they changed it. The new, longer drop-down sun visor is a big improvement on the previous one and misting is reduced to a few specs when you first drop it down that disappear quickly. But the biggest problem of any helmet with a built-in sun shield remains; looking through a drop-down visor, plus a pinlock insert plus the clear visor has a significant effect on optical quality. I should be thankful I don’t wear glasses too. And I still struggle to find the sliding lever that operates the sun visor despite it being huge and prominently located on the left side of the helmet. Am I the only one? 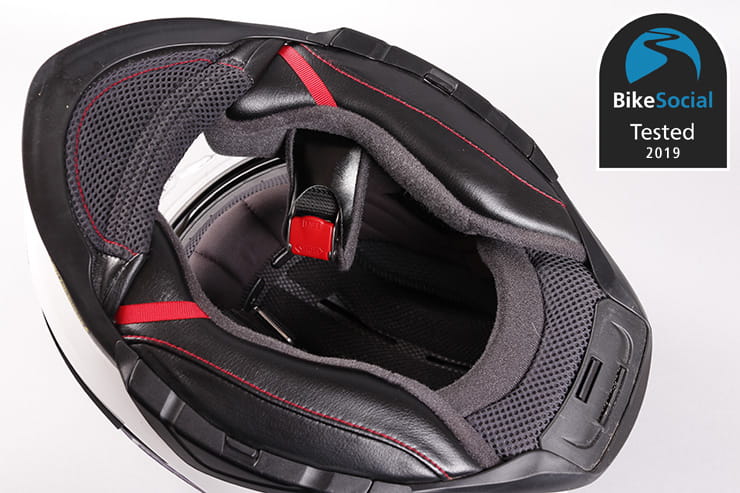 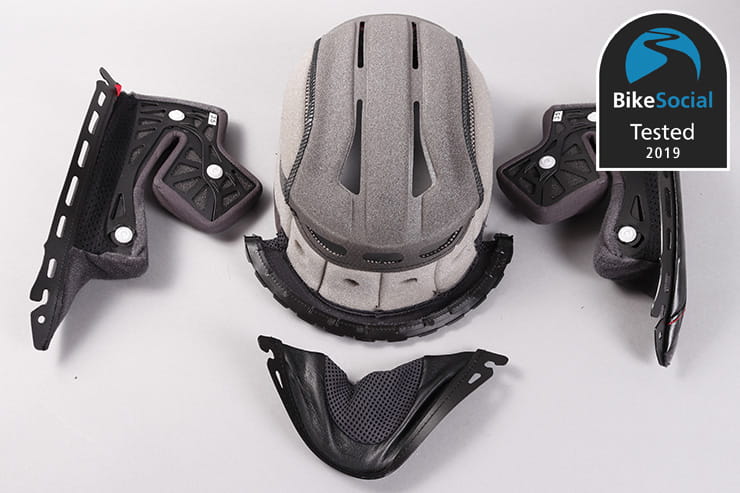 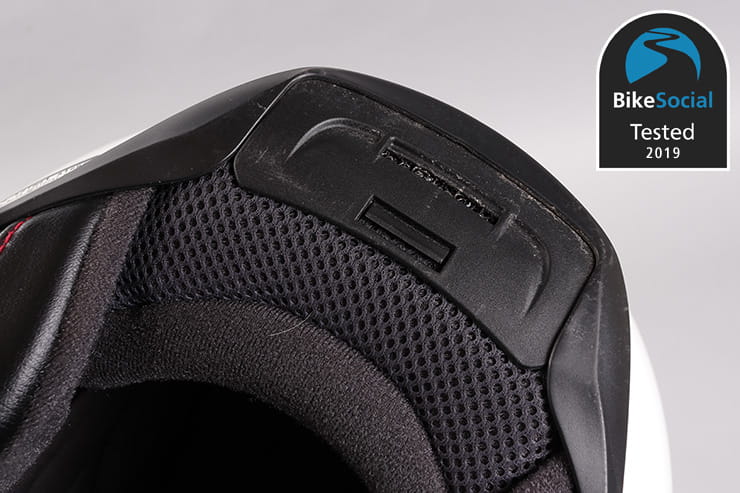 Similar to the original GT Air, it feels soft, but not quite as plush as you’d expect on a premium helmet. Sometimes (on a race lid, for example) this is because the lining is designed primarily to wick away sweat and a small amount of comfort is sacrificed for performance. Sweat is certainly wicked away very effectively and the helmet’s internal shape and lining design allows both easy putting on and removal with a snug and safe feel when on your head.

After a couple of hours in hot weather I find myself moving the lid up and down to ‘scratch’ my forehead. Removing the helmet after a long, hot ride leaves a weird indent in my head though that resembles some kind of Klingon warrior. Who says the Japanese don’t have a sense of humour? Shoei’s emergency cheek pad removal system works very well should you ever be unfortunate enough to need it. 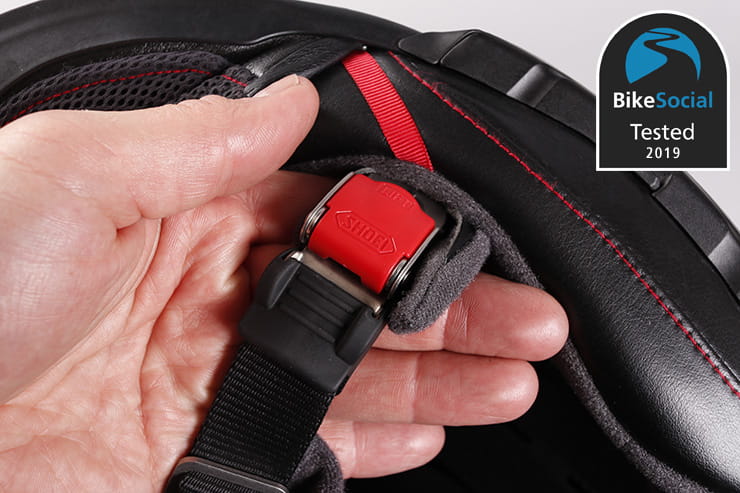 The previous model’s double-D-ring fastener has been replaced with a quick-release micro-ratchet system. For ageing luddites like me who love their D-rings and have bad memories of previous seat-belt type fasteners needing constant adjustment, this could be a bad thing. But the micro-ratchet is a world away in performance from those old seat-belt horrors. It stays adjusted to the right level, is very easy to use and feels robust and dependable. I’d still feel more secure with a double D-ring but this is an acceptable alternative that I can live with. 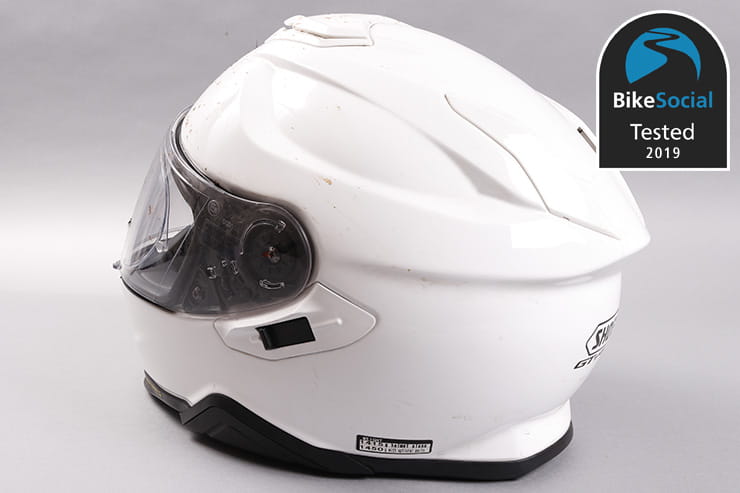 I never ride without earplugs so this is subjective. The GT-Air II is very quiet with plugs in place and there’s plenty of room in the padding around the ears to make it easy getting the GT-Air on and off without disturbing ear plugs.

18 months ago I convinced myself that a slightly heavier, less-well-ventilated helmet with a built-in sun visor was a better solution for a year-round rider that often does very long days in the saddle than a lighter, sportier lid and carrying a spare visor. 18 months on, I’m not so sure, mostly because the optical distortion from the drop down visor means that I rarely use it unless riding directly into the sun. The GT Air II is almost as good as my favourite Shoei NXR and is definitely more versatile for a year-round high-mileage rider. However, if it were my actual money it would still go on the NXR (which, you might have gathered, is my current favourite helmet) and a smoked visor.