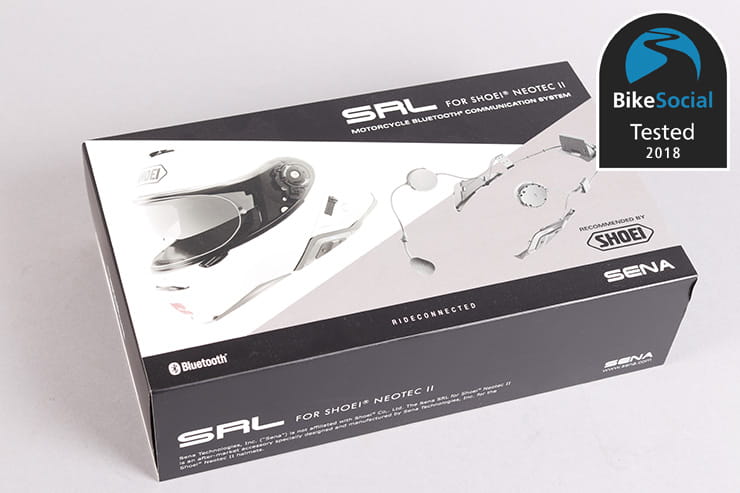 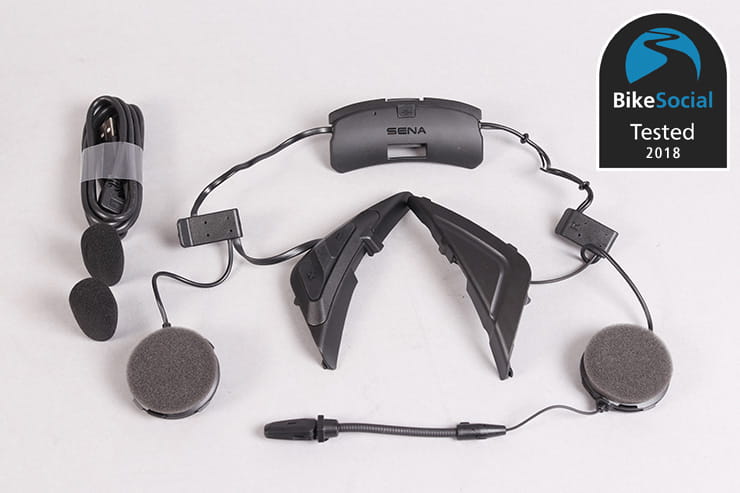 Not everyone craves the idea of being able to take calls on a bike, or even talk to their pillion, but having used a wide range of intercom systems for many years, I can honestly say that I really miss them if I’m wearing a helmet without one for a long journey.

While I don’t tend to link up to riding mates, if my wife’s on the back it’s great to be able to chat about the sights, discuss coffee stops, or receive warnings of an impending need for a loo break.

When I’m using a sat-nav, being able to hear notifications and speed camera warnings without taking my eyes off the road is great, and on those longer journeys, simply being able to enjoy some music can make all the difference.

The Sena SRL (Shoei Rider Link) is designed specifically for the new Shoei Neotec II, and I’ve been using it for several months on everything from a Honda Grom to a Yamaha Niken… 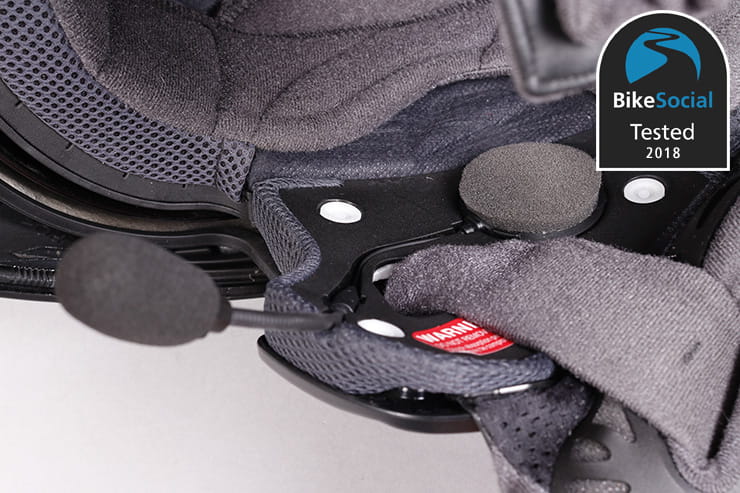 The Neotec II has channels and cut-outs to accept the SRL, so the installation is extremely tidy, with no loose wires to shove under the lining. It’s pretty simple to install, though the small quick-start guide could be a little clearer. It’s a shame there’s no full printed manual (you have to download it), but you could ask your dealer to install it for you.

If you’re buying this at the same time as the Neotec II, make sure you ask your dealer if a discount’s available. 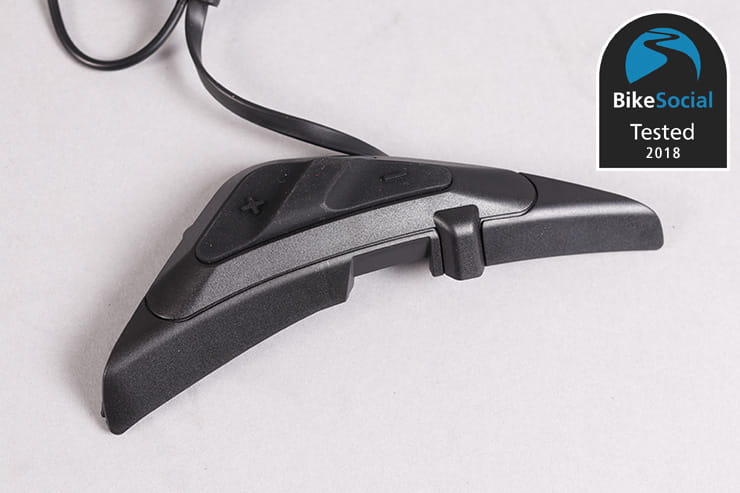 Audio is controlled via the compact switch unit

The SRL connects to your smartphone, sat-nav and other intercoms through Bluetooth. Again, I found the basic set-up guide to be a little lacking (even having previously installed several Sena and other brand intercoms) – it took me a while to realise that I had to hold the central button past ‘intercom pairing’ to get to the phone pairing option in the configuration menu. It’s obvious now, but frustrating at the time.

While all preferences can be set on the device, it’s much, much easier to pair a smartphone and use the very good Sena app on iOS or Android. I’d strongly recommend you do this, as you can easily browse the functions and see an explanation of what they do – key is to turn on ‘Audio Boost’ to allow full volume, and also set the RDF AF to ‘on’ in the FM radio, so the system will retune to the best station frequency.

Some of the key preferences that can be enabled in the app include:

While I don’t tend to use the device for calls, it is extremely handy that my wife can contact me in an emergency, and equally, that I can make calls if I need to. During a ride earlier in the year, I spotted a ladder in the opposite carriageway of the A14; by holding the centre button I was able to access Siri on my phone and say ‘call 999’ – from there I could report it to the police, and hopefully stop someone having a really nasty accident. Slightly annoyingly, at that point I hadn’t read the instructions and seen how to disconnect a call I’d made. When this call had ended I thought it was disconnected, but after a minute of trying to get my music to play again by shouting ‘hello Sena’ into my helmet, the operator suddenly spoke into my ear, asking me to please disconnect. User error.

The voice commands generally work well, though if there’s very strong wind noise it won’t always recognise that you’re saying ‘hello Sena’. It helps to tuck down onto the tank of un-faired bikes, or just tap the centre and minus buttons. Once the device is listening for your command, it tends to work very well.

Once properly set up, connections are automatic when your other devices come into range. For a while I was unable to pair my TomTom 550 with the Sena SRL – first the TomTom wouldn’t see the Sena at all, so I deleted all the pairings in both (and my phone), before turning them off and on again; then the TomTom saw the SRL, but still wouldn’t connect to it. Only after turning the TomTom’s WiFi off, doing a factory reset of the headset and the TomTom, then connecting my phone to the Sena before the sat-nav did it all work. I’m inclined to think this was more an issue with the TomTom, but it’s given me no trouble in the months since. 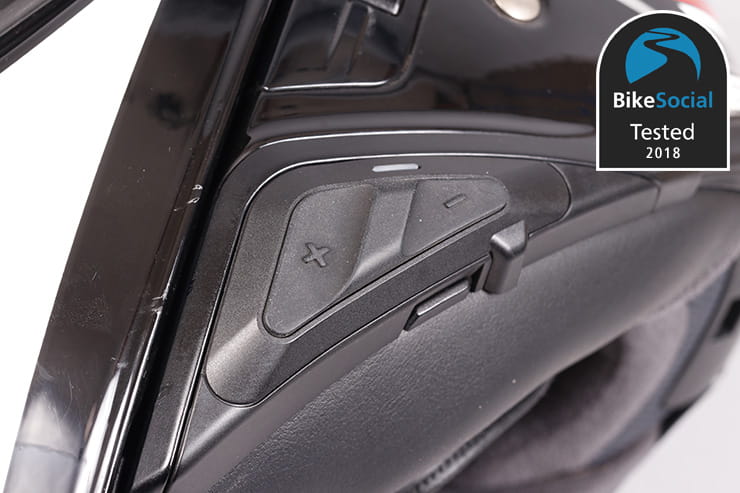 The three buttons are easy to use with gloves on

There’s just a plus, minus and centre button on the SRL – they’re easy to find with gloves on, but you do need to remember the combinations of button presses. Some can be a little confusing, like when seeking radio stations, which requires a double-tap of the plus or minus buttons, so is easily confused when you try to adjust the volume.

The useful voice commands do away with having to remember the most common key presses, and it doesn’t take much perseverance to master the controls.

Remote controls are available – I used to have the Sena 10U intercom system for the previous Shoei Neotec, which had the controls inside the visor, above the cheek pad. There were only two buttons there, but a wireless remote was also included. This was a nice addition, but I prefer not needing to rely on a remote as all too often I’d find myself on one bike, while the controller was clipped to another. 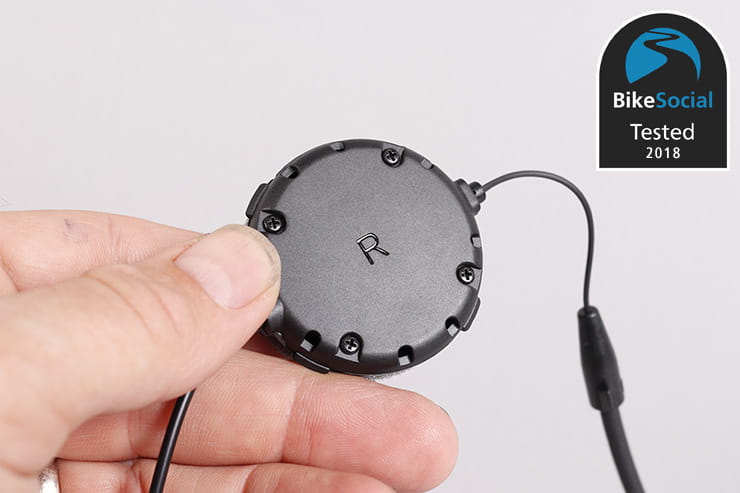 The speakers are powerful with good clarity for a headset

The previous Neotec’s 10U had slightly larger speakers, which gave better clarity and volume than other more universal devices – including in the Sena range. This SRL is just as good as the 10U, if not better – loud enough for a naked bike at motorways speeds while wearing dense foam earplugs, and with very good audio quality. Music is clear and well defined, though of course not as good as wearing in-ear headphones.

For the best clarity – while still protecting my ears – I like to use Auritech’s universal earplugs, but unlike with some other intercoms I’ve used, they’re certainly not a necessity here.

The intercom audio is certainly the best I’ve tested to date – I asses intercoms by pairing to my wife’s Sena 10S, so the clarity will be dependent on that device and the helmet it’s in. Her lid is a lot more noisy than the Neotec II, but I noticed that her voice was still clear even up to 75mph. More tellingly, she found that the audio she could hear was much better than anything she’s tried before, even with me wearing the quietest lids. A very impressive performance. 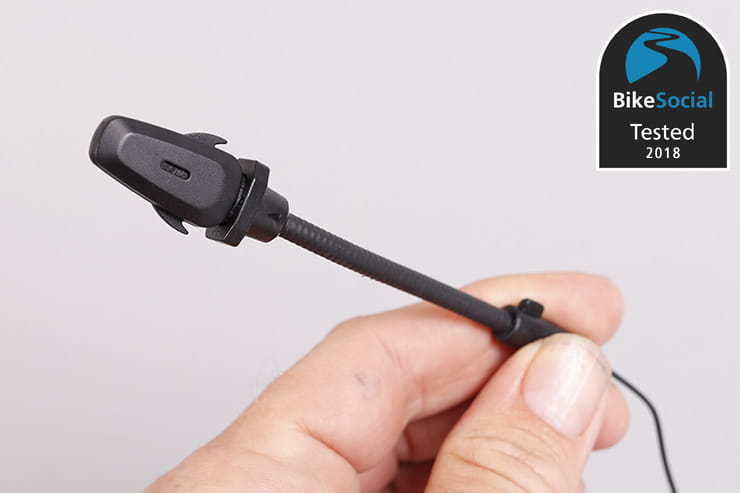 The actual range will be as dependent on my wife’s 10S as it is on the SRL, so it’s no surprise that the distance covered was similar to that of other devices, but it was certainly the most crisp and clear of anything tested to date until it did break up.

During line of sight testing, the connection started to break up at 550m, then cut completely at around 750. Turning around after 1km, the SRL beeped to warn that connection was lost until it automatically reconnected at around 600m.

In a busy village high street, the connection started breaking at around 400m, then was lost completely at approximately 470m. Reconnection occurred at about 300m

In a winding, built-up housing estate, connection was lost in just 130m, due to buildings blocking the signal. Reconnection wasn’t achieved before I returned to the other unit, but this isn’t too surprising given the short period of time. 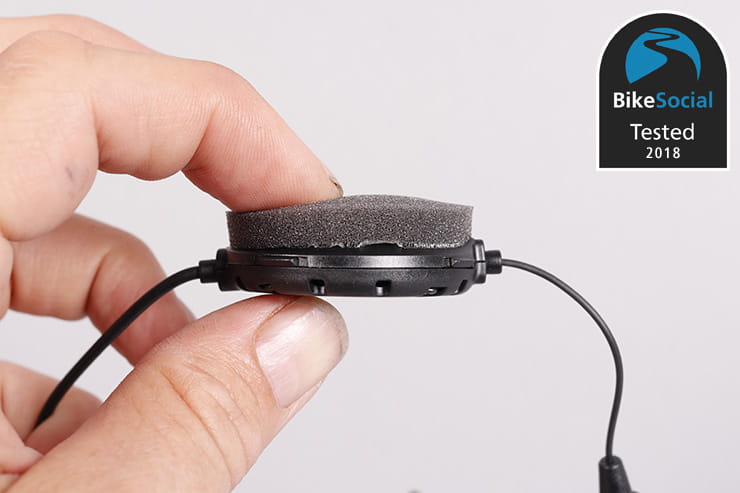 Sadly, like every other intercom I’ve tried, the FM radio is fairly useless unless you’re staying pretty much in one area.

Despite automatically retuning, stations are often lost, and if the signal is anything but its very best, you’ll struggle to find anything to listen to. I’ll often start a journey enjoying the radio, but have to give up after about half an hour’s riding.

For short commutes, you might find the radio to be satisfactory, but otherwise I’d consider it little more than a novelty. 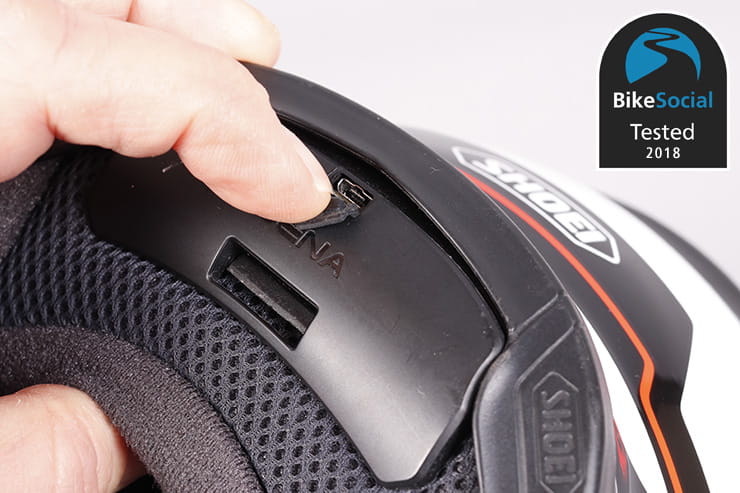 The battery’s charged via a Micro-USB port

When you turn the device on and it links to your phone, the battery level is shown in a small icon at the top of your screen – very useful, though unfortunately if you split the two devices up, when they repair as you get them close together again, the battery symbol is gone. Still, how often will you have the intercom turned on and be more than ten metres away from your phone if it’s paired?

Charging is via a standard Micro-USB cable – as used by Android phones – and through testing I’ve found a full charge will power the Sena for 5hrs and 45mins while playing music at full volume through a paired smartphone. It’s an acceptable amount for most days’ riding, but the original Neotec intercom managed a far more impressive 12 hours.

When I first connected the SRL to the Sena app on my iPhone, I was told it needed a firmware update. Unfortunately you can’t do this via the app, but it is very simple once you’ve downloaded another application to your computer. PC and Mac compatible, this is an easy process, but if you are struggling, speak to your dealer as they should be able to assist. 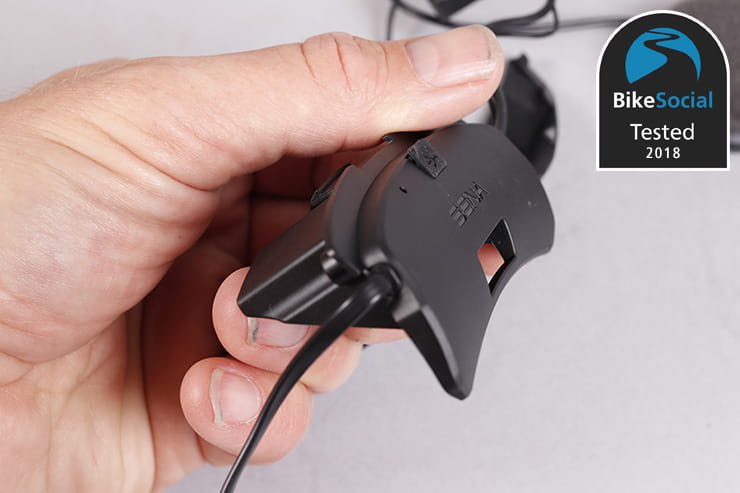 Battery life is disappointing compared to the previous model

With the ability to link up to eight riders in group intercom mode thanks to its twin Bluetooth chips, the Sena SRL is a powerful device.

The excellent clarity and high volume make it very desirable – it’s based on the universal 20S, which is a similar price, so you’re not really paying anything more for the very convenient fitting.

Ultimately though, the ability to link to many other riders in your group might not be something you’re interested in, so compared to the slightly more basic 10S it’s a premium product. However, despite some setting up niggles and relatively poor battery life, the very neat fitting and – more importantly – excellent audio quality add up to an excellent device.

If you want an intercom system for your Shoei Neotec II, this should be on the top of your wishlist.