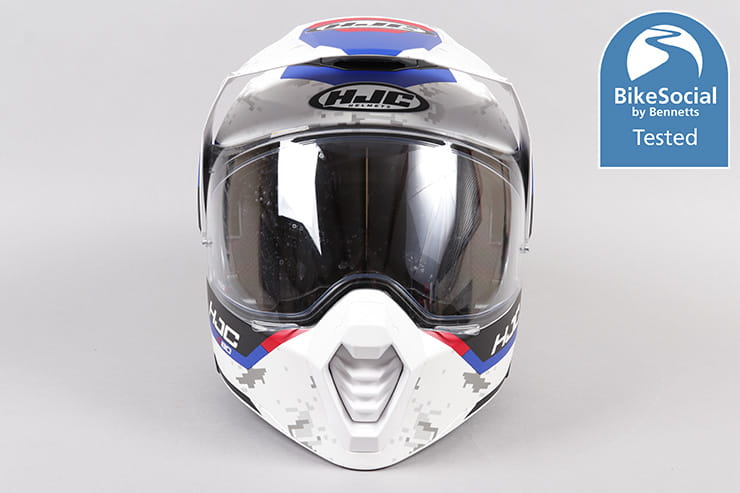 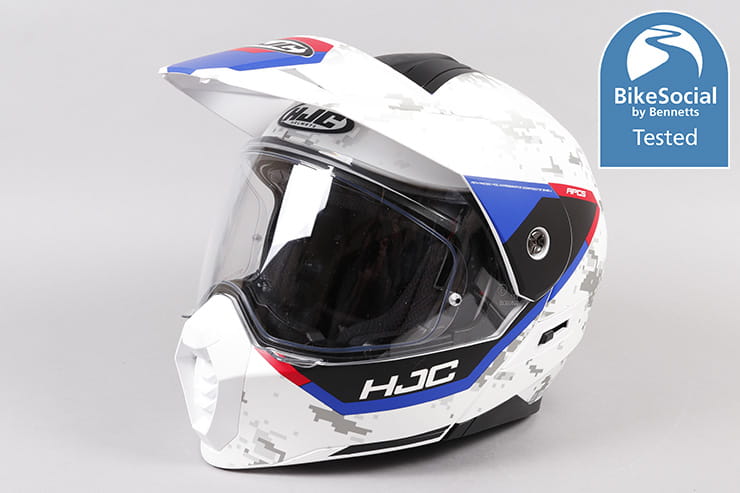 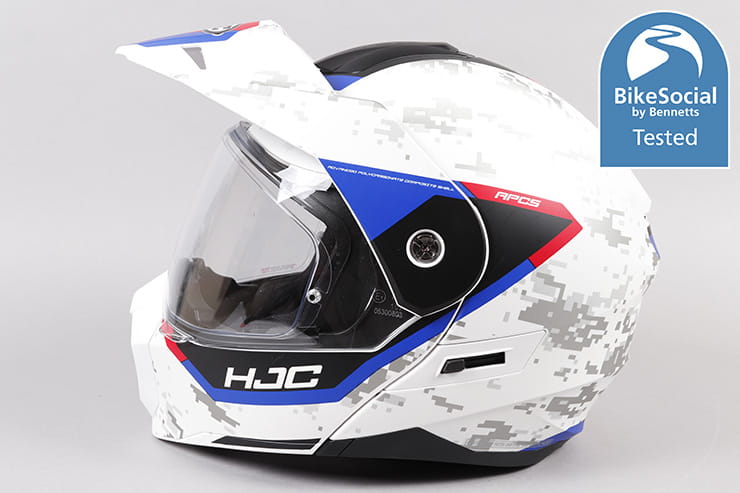 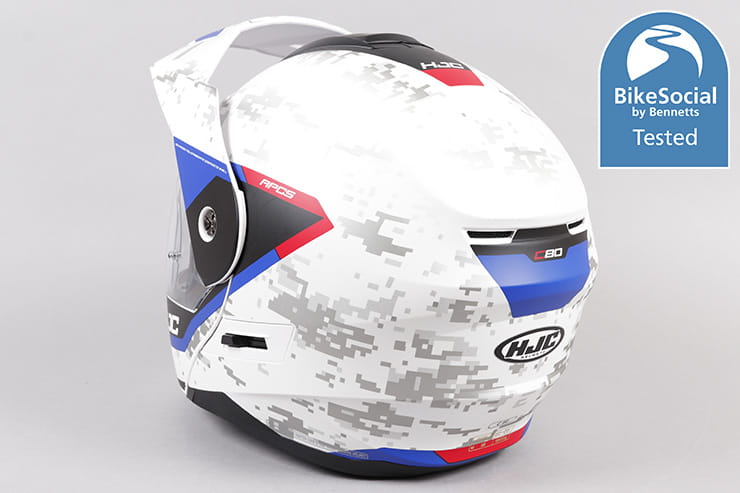 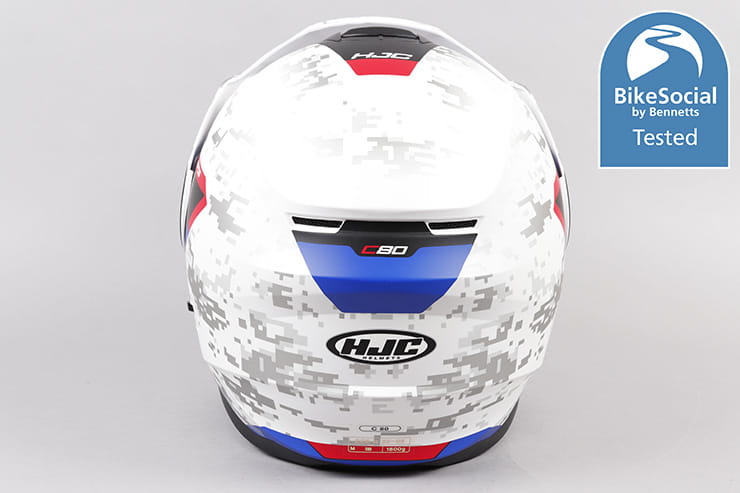 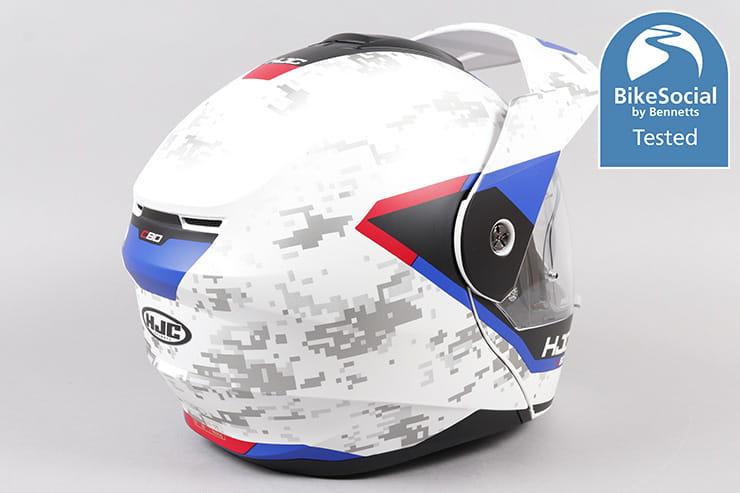 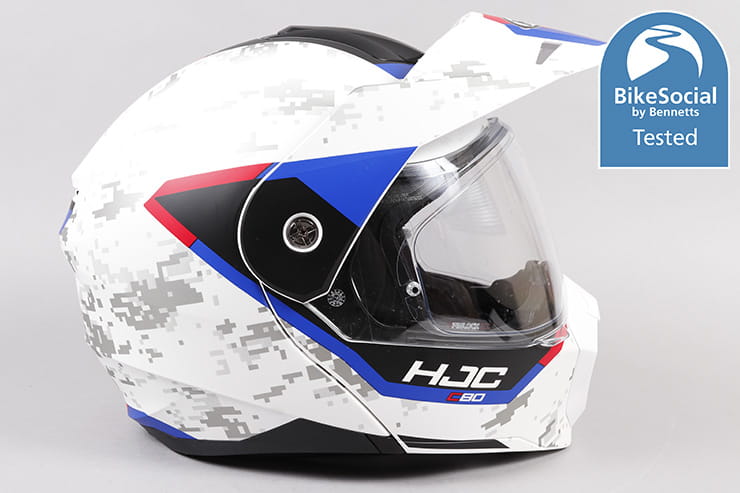 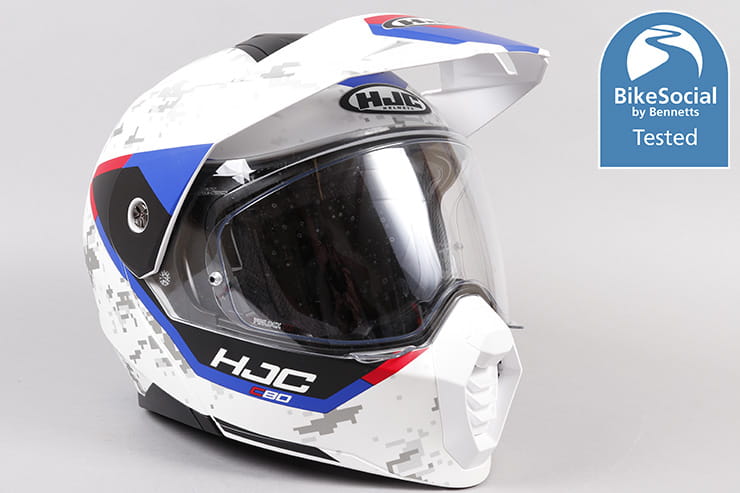 The HJC C80 on review here is new for 2022 and offers a combination of flip-front (or modular) convenience, along with a removable peak that can be great in the low summer sun. 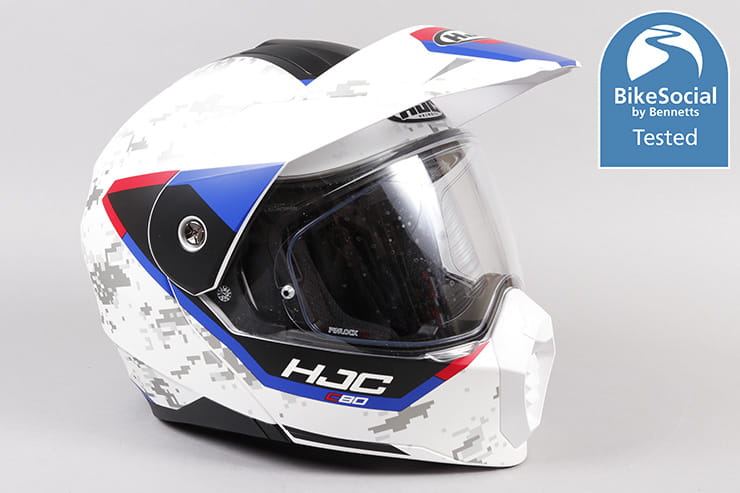 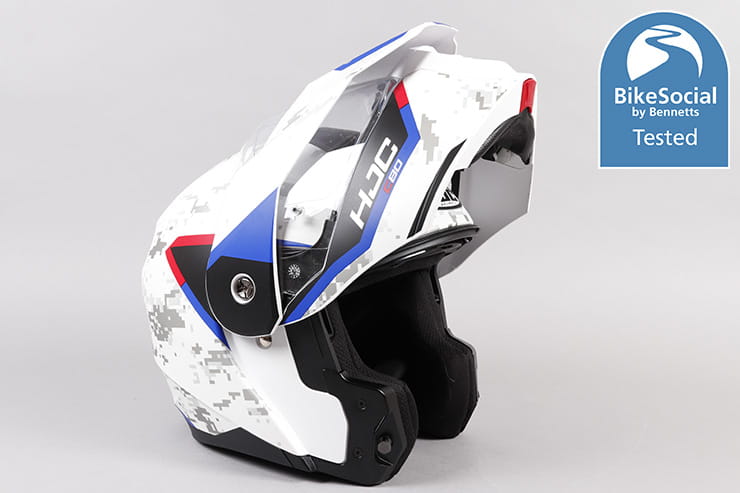 The HJC C80 has a polycarbonate shell – as you’d likely expect given its price – with the plain colours costing £209.99, and graphics like this ‘Bult MC21SF White Red Blue’ retailing at £239.99.

The matt finish and well-applied decals here don’t seem to attract too many fingerprints, and watermarks are easily wiped off.

The flip is operated with a button on the underside of the chin that’s easy to use with gloves, and shuts securely with one hand – something important to check on any modular lid.

The C80 is only homologated as a full-face, so it’s technically illegal to ride with it open. Despite this, the chin-bar locks firmly up in place without the need of a secondary catch.

The HJC C80 is not certified to the new ECE22.06 standard that sees more intense safety testing carried out on the helmet. This doesn’t become law until 2024, and it won’t affect helmets people have already bought, but this is the last ECE22.05 helmet that we’ll be testing on BikeSocial. 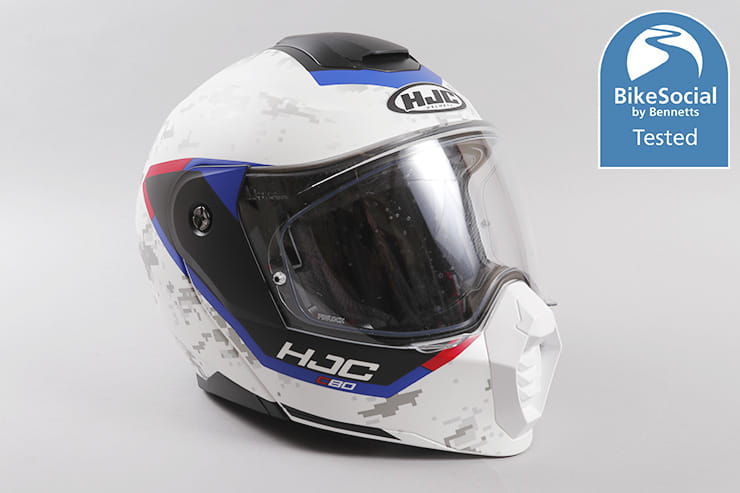 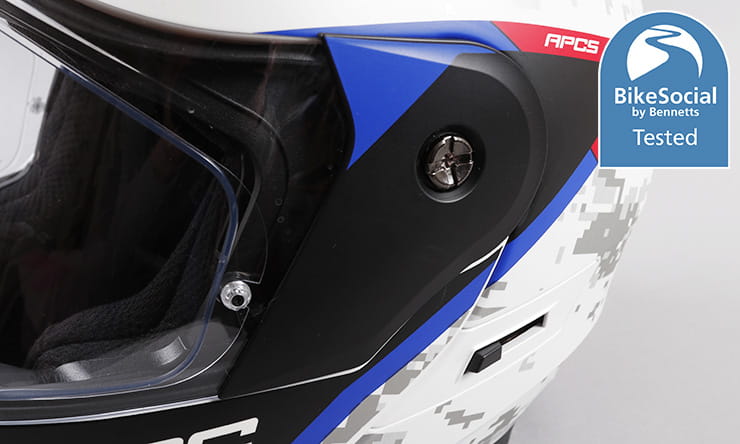 Without the peak, the HJC C80 weighs 1,873g; with it it’s 1,982g… for a polycarbonate lid, that’s pretty hefty. The glass-fibre shell of the new Schuberth C5 makes for just 1,695g and the Shoei Neotec II is about the same, though they are a lot more expensive.

Ultimately, I’ve yet to find any helmet that feels heavy when it’s on, and while there is a little drag noticeable when turning the head for a shoulder check (particularly with the peak fitted), it’s not a bad helmet. 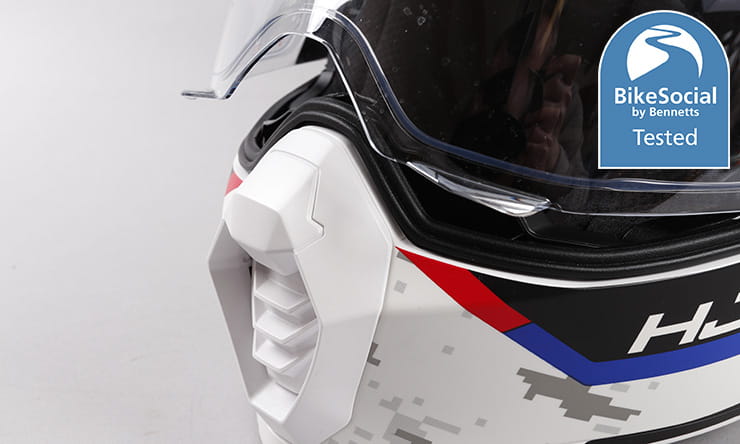 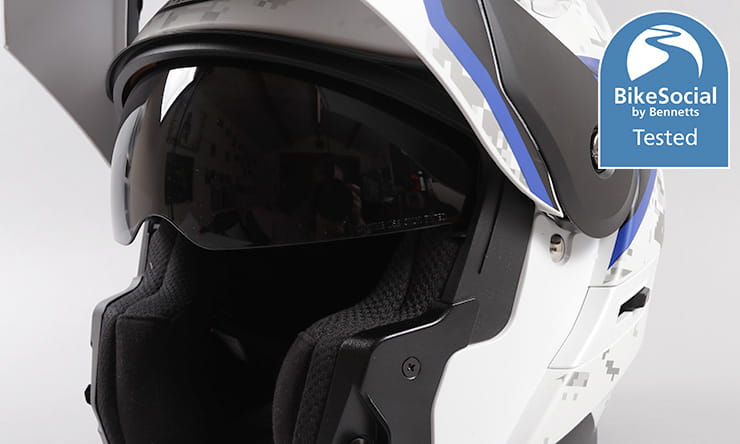 The first stage of the visor ratchet sees it open a bit too far. A drop-down sun-shield is included, operated by a slider on the left side

With an open/closed chin vent and an open/closed top vent, air moves around the HJC fairly well in the heat, thanks also to the always-open exhaust on the rear.

The top vent is easy to slide and the difference between open and closed is quite noticeable, but the chin vent is a little disappointing in that it’s surprisingly hard to operate reliably with thick gloves on (it’s too easy to knock open or closed), and it still seems to let some air reach the mouth through the internal vents even when it’s closed. This makes it chillier in the winter months, compounded by a lot of air getting up under the front of the helmet.

I did notice some buffeting inside the C80 on the Tracer, which was uncomfortable around the ears, but it depends very much on your bike’s aerodynamics and the shape of your head. 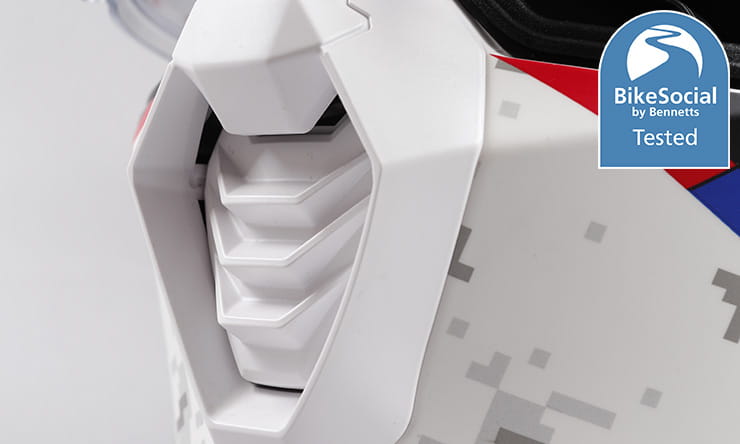 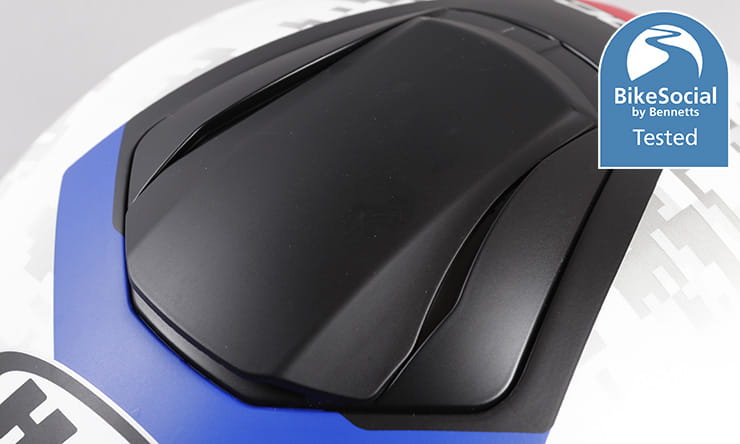 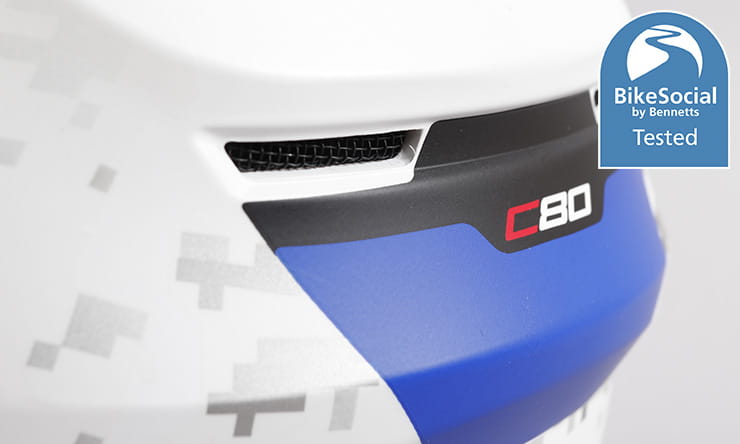 The visor is held in place with a screw on either side, which makes it rather fiddly to remove for cleaning. These screws also hold two cover plates in place, which are replaced by the peak when you want that fitted and taking this off and putting it back on every time you take the visor off is pretty irritating.

While peaks on motocross lids help protect against mud spray, here it’s a great way to tip your head a little to block out low autumn sunlight.

With the standard screen fitted to the 2021 Yamaha Tracer 9 GT, I did find that the peak shook severely at speed, which is quite distracting. However, this bike suffers with a fair bit of buffeting, and if I stand up out of the turbulence (or duck down), it soon stops. Crucially, it also isn’t a problem with the low sport screen from Ermax in place.

Some more expensive helmets suffer far less from peak shake (like the Arai Tour-X4 and Shoei Hornet ADV), while others (like the Schuberth E1) can be affected. Unfortunately it’s impossible to say whether you’ll have it on your bike as it’s also influenced by your height and body position.

A Pinlock 70 is included; this mid-range anti-fog insert works well, but as with any helmet of any price, if you wear specs you’ll still likely need to crack the visor open during winter at low speed.

It’s great to find thumb tabs on both sides of the visor – making it easy to open with your right hand – but the first stage of the smooth ratchet mechanism sees it lift a good inch; a ‘just cracked’ position would be appreciated.

There are only three open positions to the visor, but it operates well and a drop-down sun-shield (operated by a slider on the left side) is included, which reaches down well, but does just touch the top of my nose – this will vary for different users of course, so try it for yourself.

The HJC C80 isn’t designed to be used without the visor, but you can put the blanking plates on without it, then some goggles will fit the aperture. It’s not ideal though, so if this is important to you, I’d recommend something more dedicated to the task. 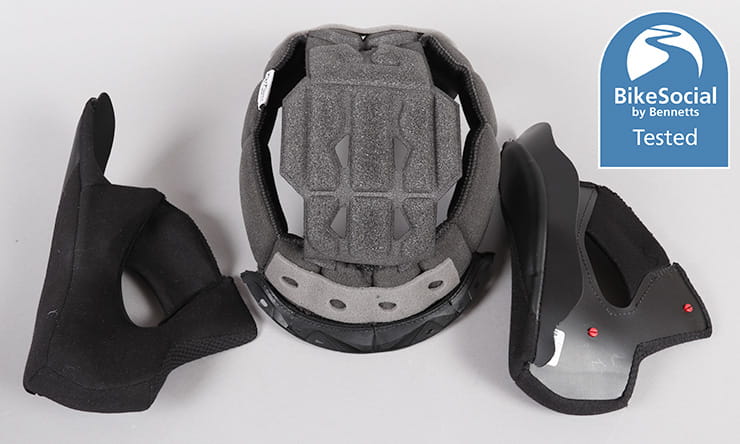 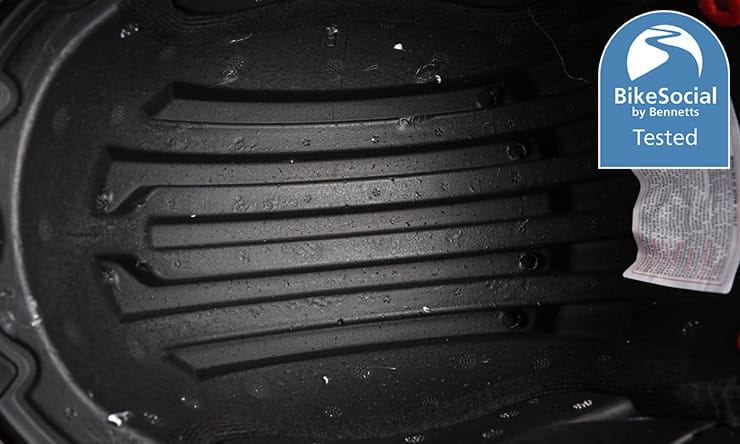 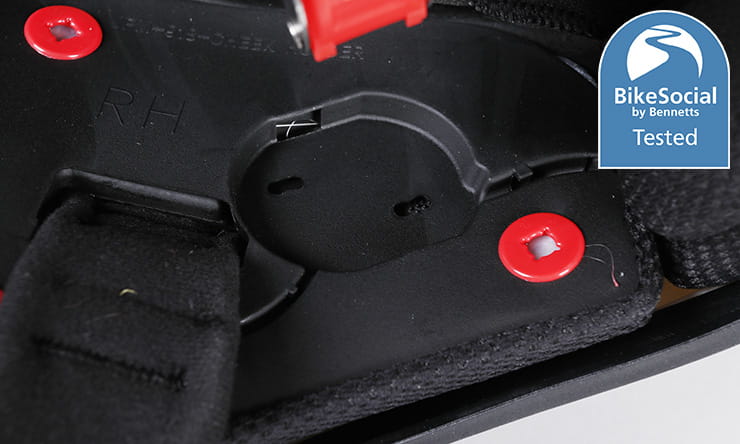 There’s none of the fancy trim or piping of some more expensive lids, but the C80’s lining is comfortable and fully removable for washing.

The C80 is designed for HJC’s own Sena-made 20B and 10B intercom systems, but there seems no reason not to install your own comms, if you prefer. 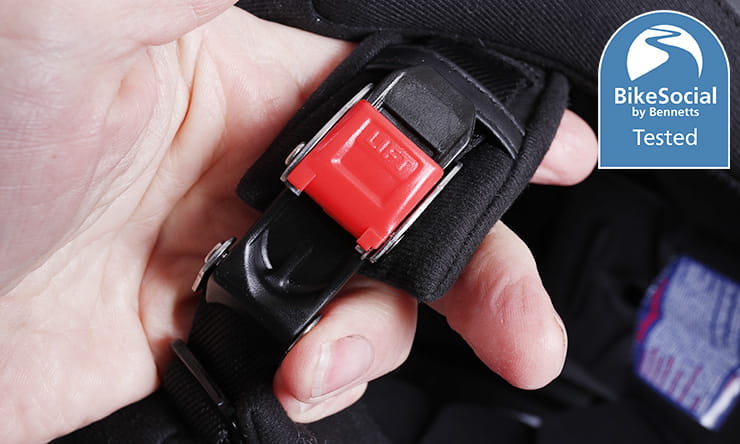 The HJC C80 is fitted with a micrometric buckle – set the strap length when you first get it, then the ratchet mechanism will ensure you always get a good fit. On a lid of this style, it’s the fastener I prefer as it can be operated even with gloves on.

Unusually for a flip-front, the C80 can be put on without first opening the chin-bar. This might appeal to some, though it is at the expense of the tighter seal that’s possible with this design.

Fit is of course extremely subjective; it’s vitally important that you try any helmet on before committing to buy it, even if it’s from a brand you’ve used before.

While I don’t find the HJC C80 to be uncomfortable, it doesn’t have the best fit, on my head at least; the cheek pads seem tight in some areas, but not where I’d expect them to be. Again, it’s not uncomfortable, but I am more aware of having this helmet on than I am with some others. It may well be completely different on your noggin.

Spectacles fit easily, not lifting off the nose or pressing into the sides of the head. 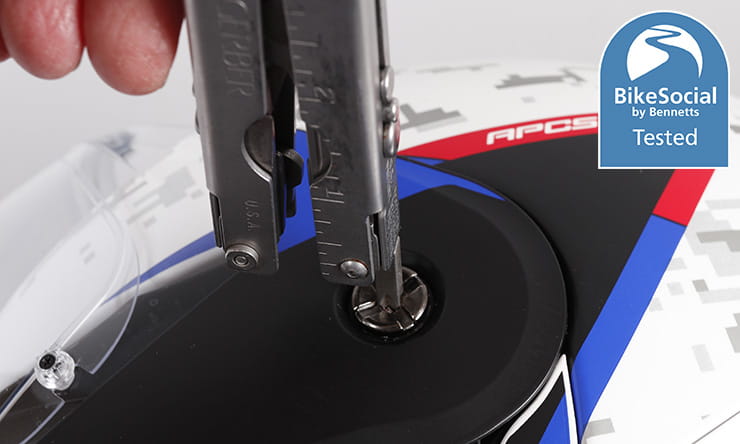 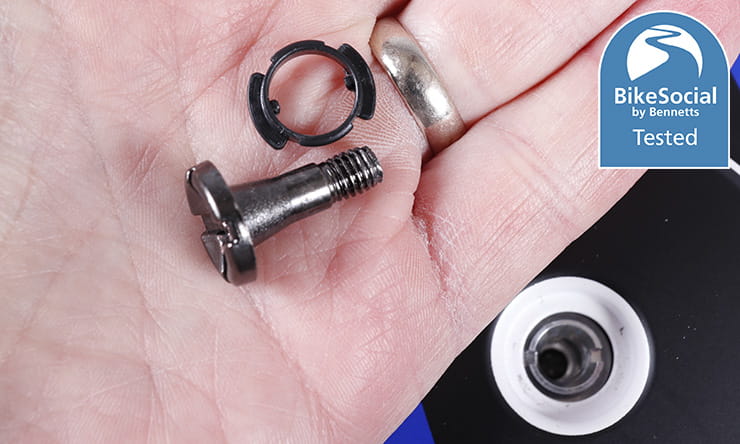 Despite there not being a great seal on my ears, the C80 isn’t a noticeably noisy helmet. Like with every lid, you’ll still need earplugs, but it’s not bad at all for a flip-front.

Three alternatives to the HJC C80

There’s not a huge choice when it comes to a flip-front with a peak at this price, but here are some options to consider…

These are just three alternatives – you can find all the helmets we’ve tested here and be sure to regularly check for the discounts available through BikeSocial membership.

I wouldn’t recommend the HJC C80 too strongly for an all-year-round commuter due to the fact that it can be quite drafty even when all the vents are closed, which is a shame as the peak is ideal for the low sunlight we so often see during the winter months.

Having said that, with a neck-tube or balaclava it’d be a lot better, and there aren’t that many options when it comes to a flip-front with a peak… especially at this price.

Overall it’s a decent helmet, especially looking at the current street prices of around £179 for plain colours, to £204 for graphics. Try one on and if your bike’s not too buffetty it might well be a good value option; just don’t expect the fit, comfort and performance of some of the more premium brands.