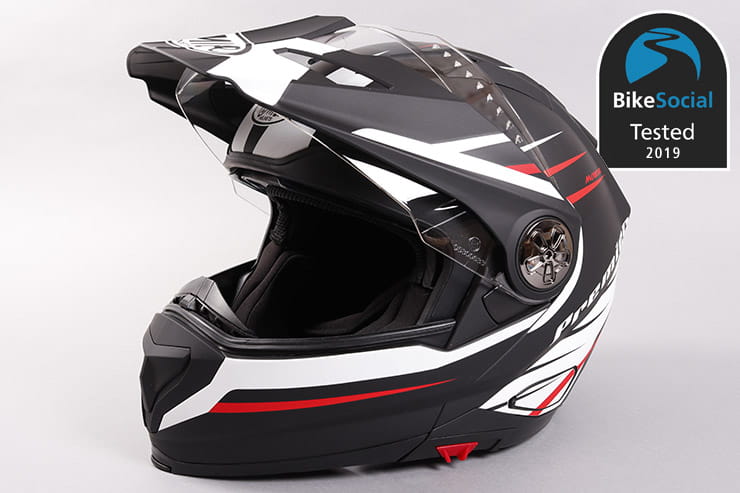 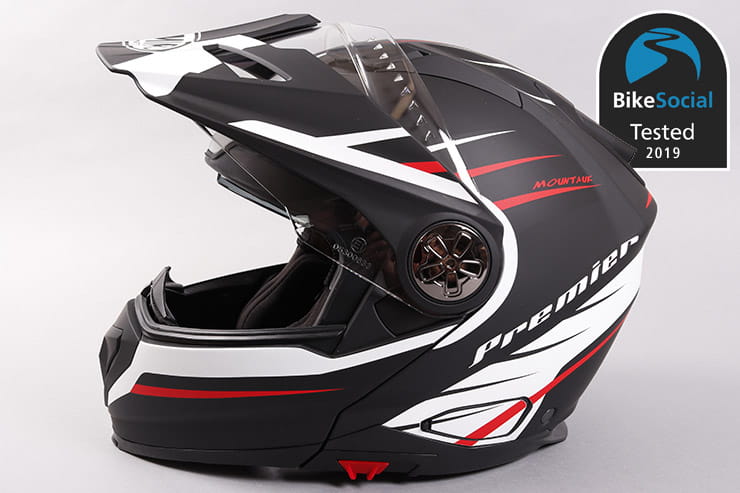 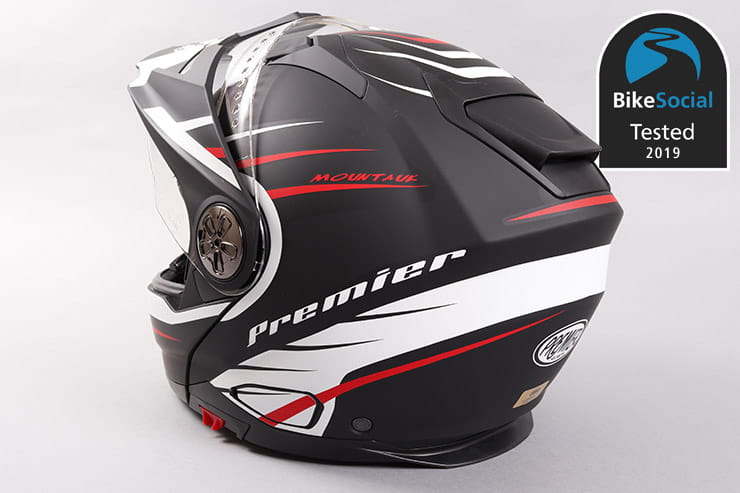 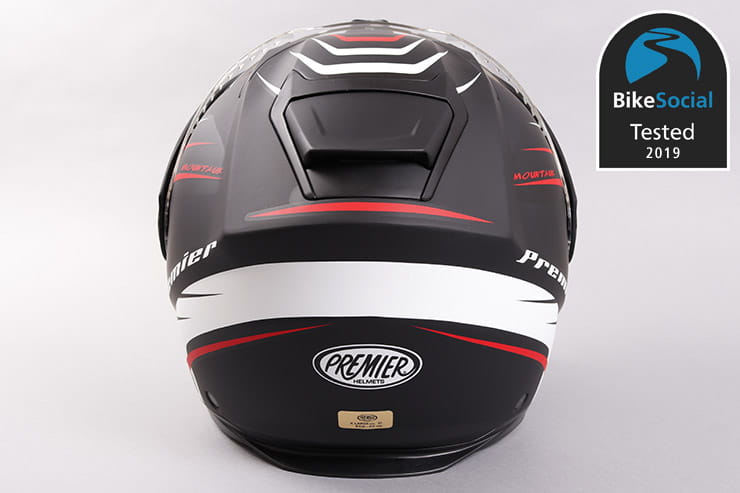 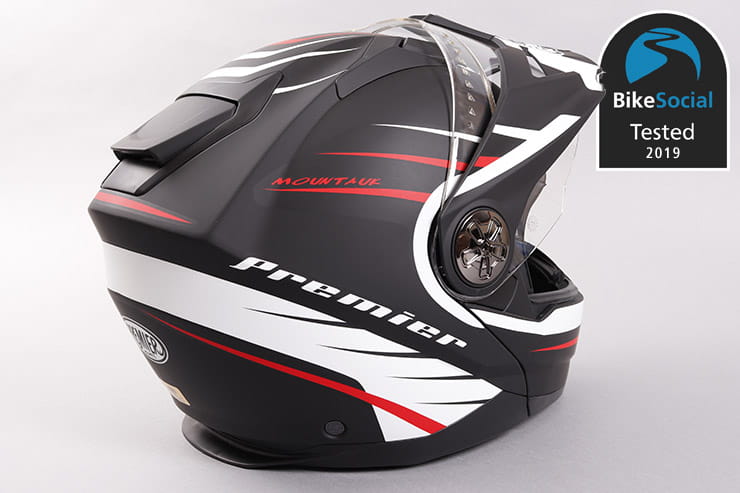 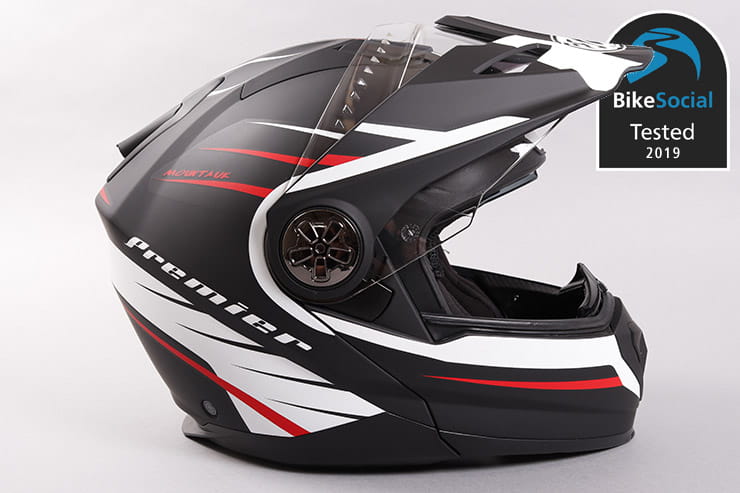 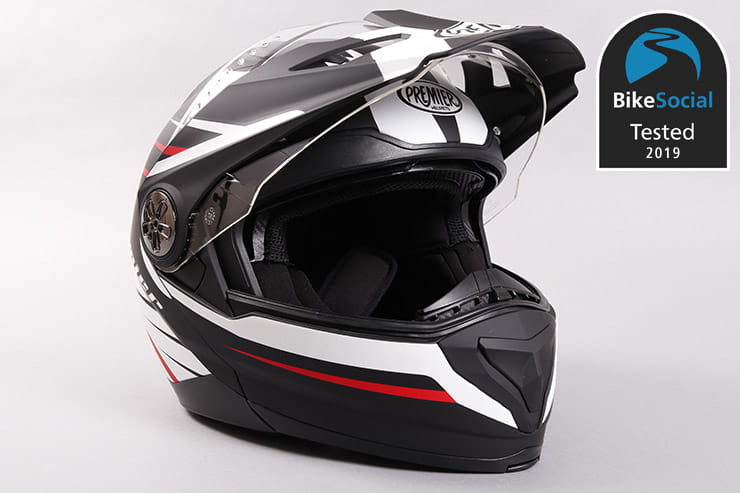 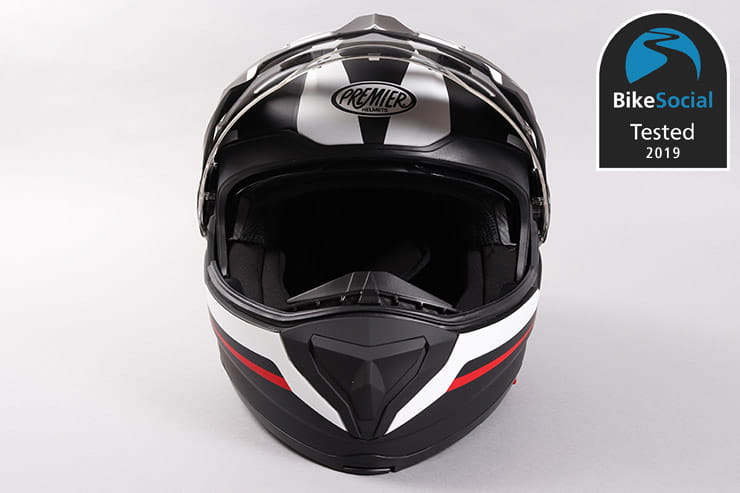 I’ve been wearing this Premier X-Trail MO flip-front helmet for my regular commute of 25 miles and day rides of 150-20 miles at a time. After several months with it on my Honda Africa twin and Royal Enfield Himalayan, I’m ready to give a full BikeSocial review… 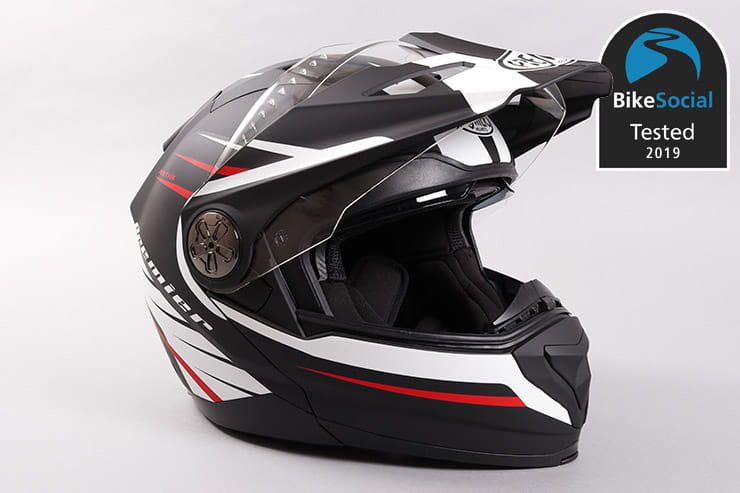 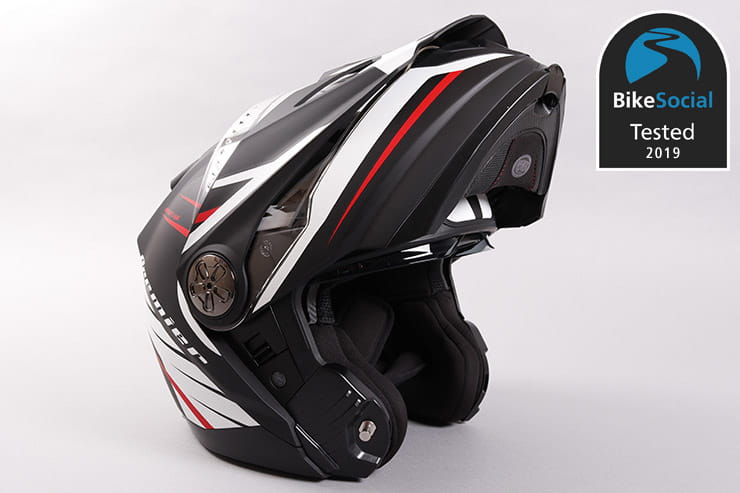 The Premiere’s outer shell is made from thermoplastic, in this case finished in matt black with red and white details. A plain matt black version costs £199.95.

This is a flip front helmet, which some people prefer as it allows you to open it to talk to people (and avoid taking it off at filling stations), and get great ventilation during a ride. Keep in mind though that, while it does of course conform to ECE-22.05, it’s P-rated only, which means it should, technically, only be used with the chin-bar down. An additional J-rating would indicate that it can also be used in open face (or Jet) mode.

The chin bar is opened with a catch in the bottom centre and it works well, being easy to find with a thick winter glove on, and it closes with a reassuring clunk.

The peak though is a fairly thin and flexible plastic that can move a little when riding; I could see it moving just at the top of my vision and it started to vibrate at around 50mph, getting worse as the speed increases. It will depend on your bike, but on both the Honda and the Royal Enfield it was there, if a little less noticeable on the Himalayan.

The shell also has a recess with removable cover for a Bluetooth intercom system. 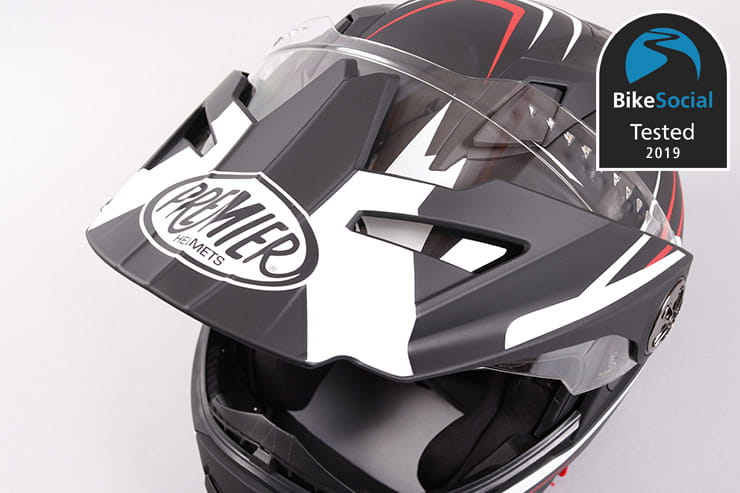 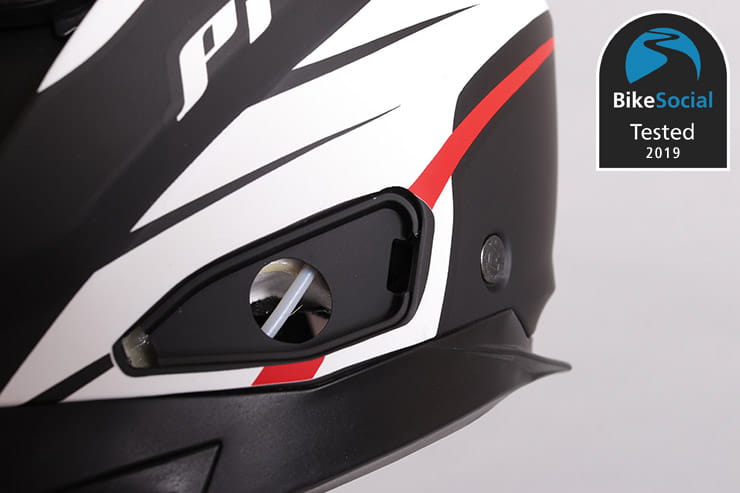 While the Premier feels heavy when you hold it (this XL is 1908g), once it’s on it’s not too bad, although it is noticeable when the chin bar is in the open position – the weight feels top heavy to the front but as its only homologated to be worn closed while, riding the times its open should be minimal. 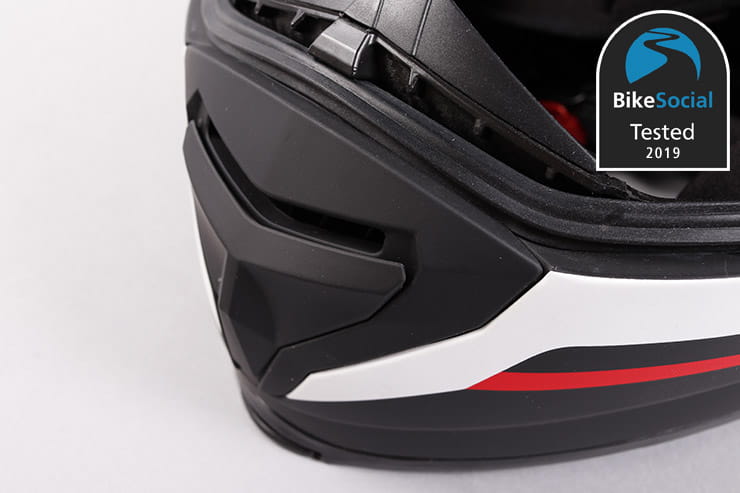 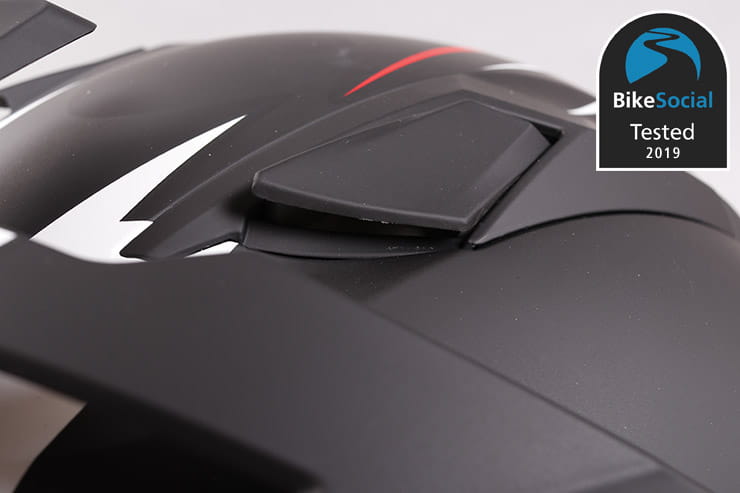 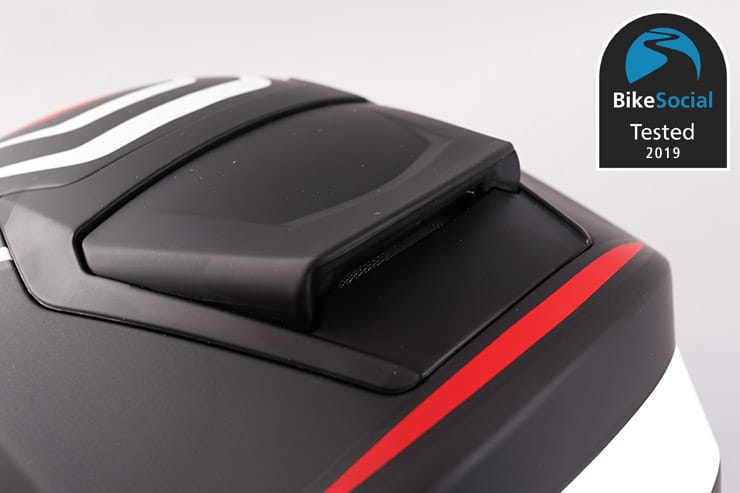 There are three inlet vents; one on the chin and two on top, with one exhaust vent at the rear. They’re all easy to operate even with a thick glove on once your muscle memory is tuned into them. With them all open I could feel a definite change in temperature inside the helmet – not a draught coming through but it’s definitely cooler. 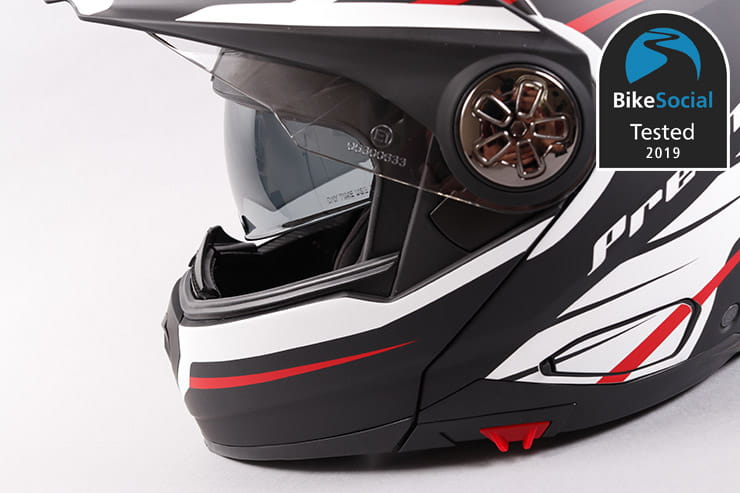 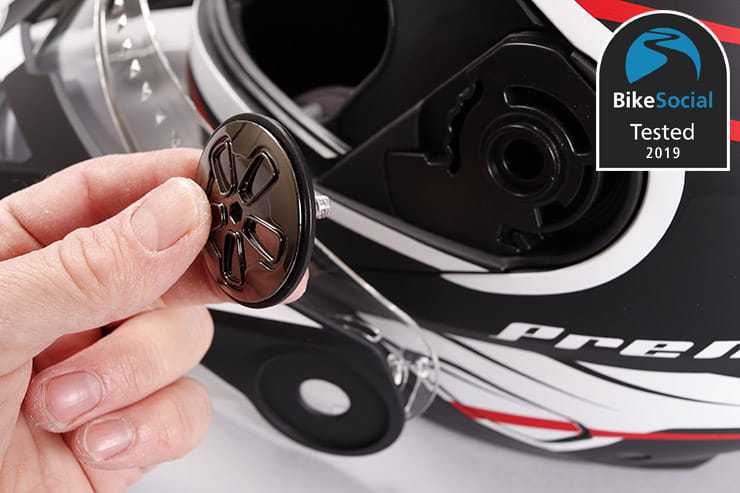 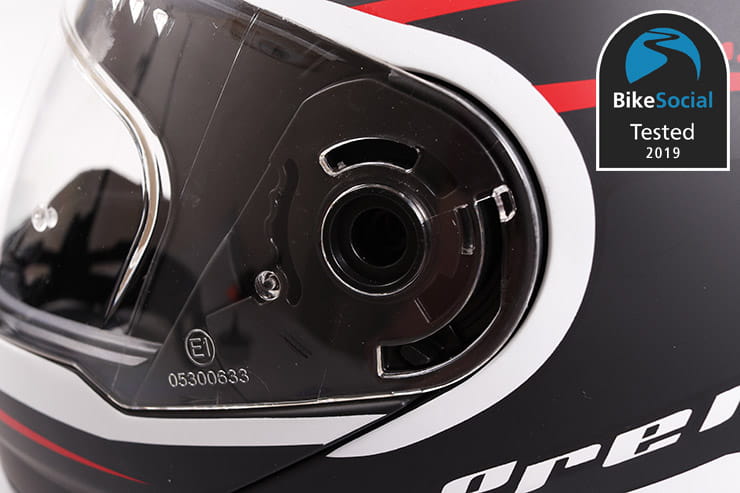 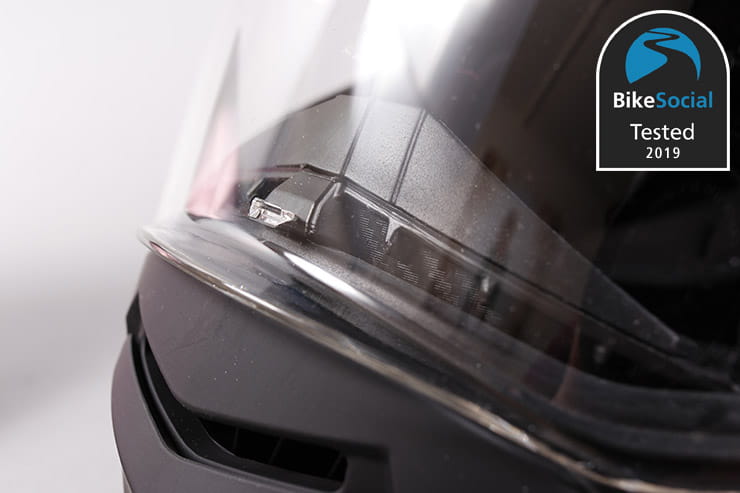 The visor is either closed or in one of three open positions, the bottom leaving approximately 40mm at the centre of the visor to the chin bar; if you like riding with the visor just cracked open, this won’t do it.

It’s opened by means of a raised lip at the centre but when the visor is raised to its final position the lip fits very close to the peak where it can be difficult to pinch to pull it back down.

There’s an internal dark visor that’s operated by a slide catch on the left of the helmet and is both easy to find and to operate. The sun shield itself is a good hue that really makes sunny days bearable without making everything too dark; it’s obvious how good it is at cutting sunlight as soon as you drop it down, with a good range of movement that just stops short of hitting my nose.

In my wet rides I didn’t get any water ingress through the visor seal, but in testing (using a shower-head, as with all lids reviewed by BikeSocial), water did find its way in at several points along the top seal. There’s no adjustment to tighten it up.

The visor comes fitted with Pinlock studs for a supplied Pinlock 30 (the lowest level of Pinlock performance).

Removing the visor is done by unscrewing the circular parts on either side – it’s not as elegant as a quick-release visor, and the screws can be tight and difficult to remove, requiring a 4mm Allen key (not supplied) if you can’t get the grip necessary. Once removed, the peak, visor and occasionally the spacer falls out. It’s not hard to put it all back together, but it is a fiddle of a process.

The helmet can’t be worn without the peak. 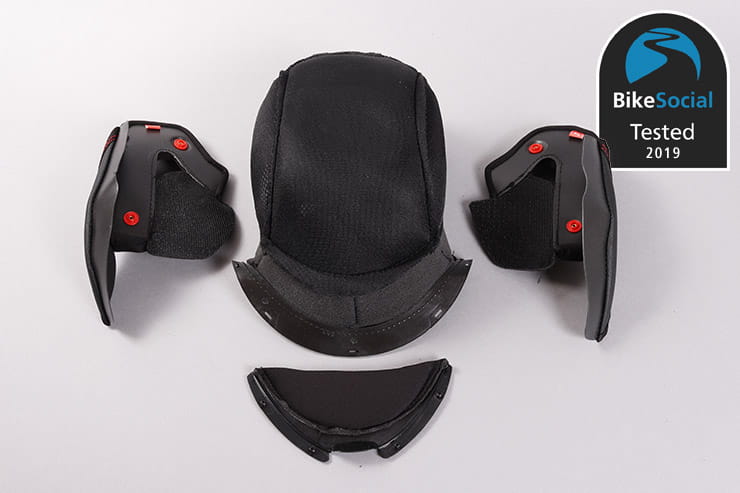 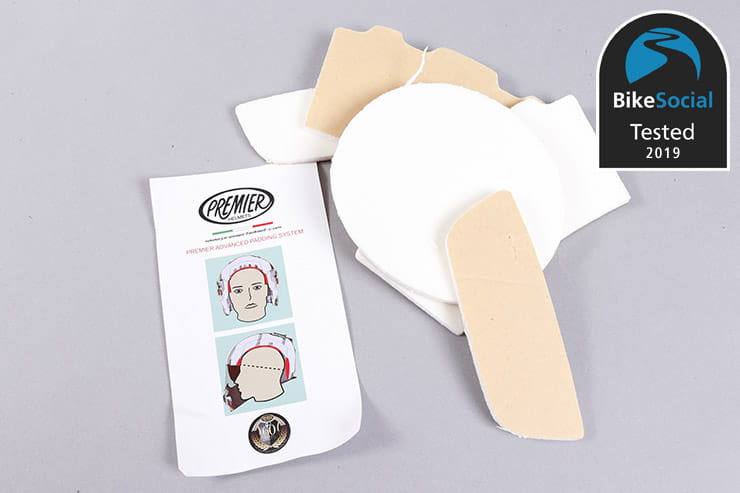 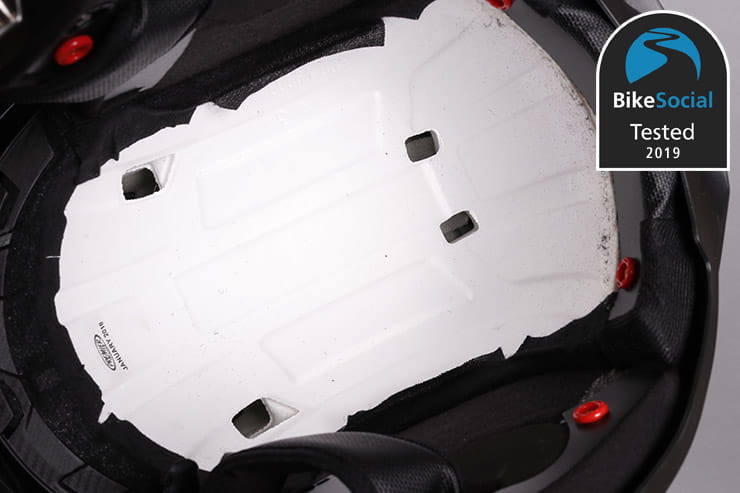 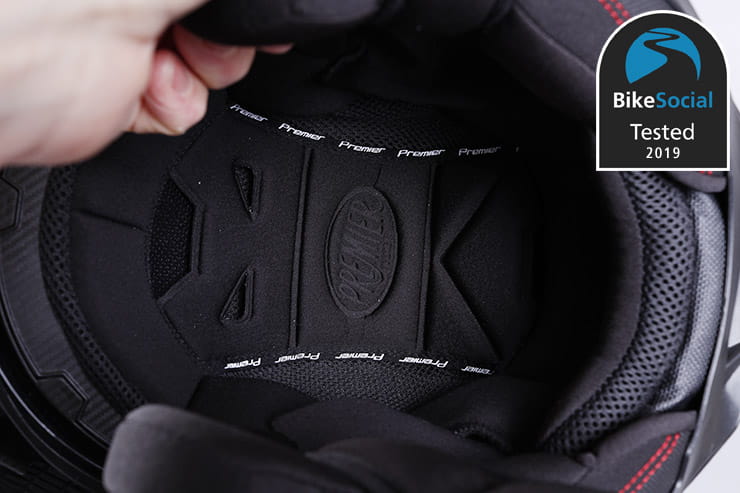 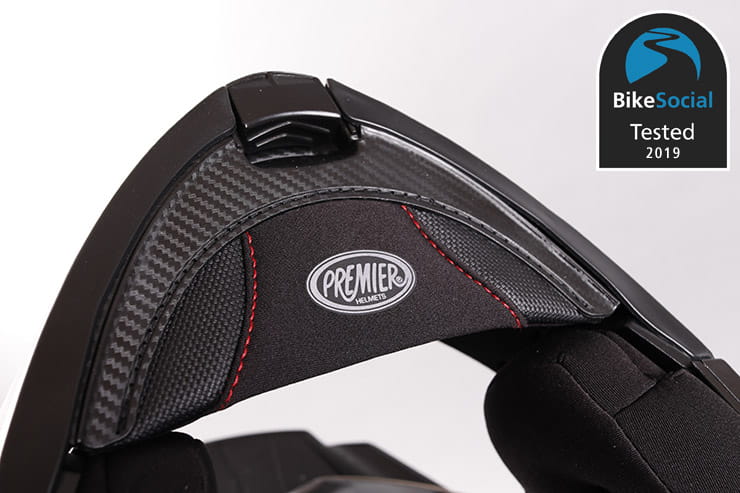 The lining is both removable and washable; after I’d taken it out I found it really easy to put back in and it stayed there securely. The helmet also comes with a chin skirt and while this is removable, the outer clips did pop out sometimes while I was opening the chin bar. The material of the chin skirt is nice and soft, which helps protect your neck from rubbing. 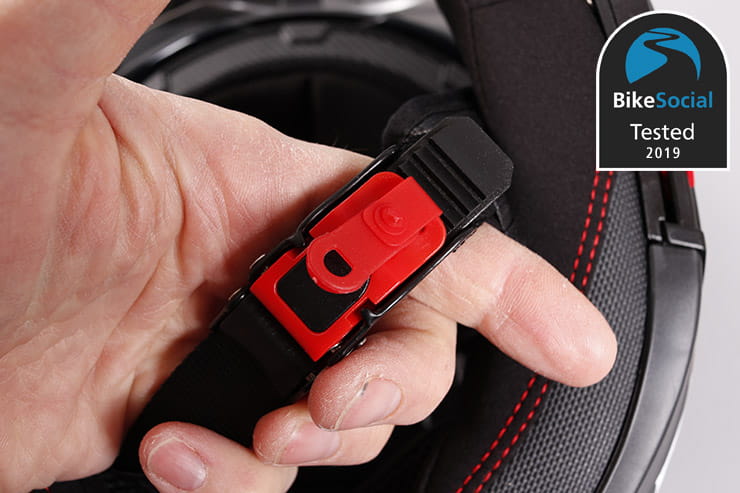 Fastening is by way of a micro metric strap, which I found easy to use. Some people prefer a traditional double-D ring, but this system is very quick and convenient.

I like the fit and the sizing was as I always buy – XL – although I would always recommend trying any helmet on before buying. The X-Trail does come complete with a set of foam pads, something Premier calls the ‘Advanced Padding System’; it’s a self-adhesive foam padding kit to ensure your helmet fits properly by attaching them under the liner at specific points. I didn’t use it as the XL fitted me well straight from the box.

I wear glasses all the time and found plenty of room for them inside, plus the shallow cut-outs in the liner mean that that the speakers for a Bluetooth system don’t rub on my ears.

While all helmets need earplugs, I thought the Premier was noticeably noisier than both the premium and budget helmets that I wear most of the time.

Premier has packed a lot of features into this lid with the intercom compatibility, internal visor, Pinlock, washable interior, ventilation that works and a flip front design, though all those features do also add up to make it a bit heavier than the likes of the much more expensive Shoei Neotec II and Schuberth C4.

I’ve found this a comfortable helmet and really wanted to love it, but that vibrating peak is a real disappointment on my two bikes at least…