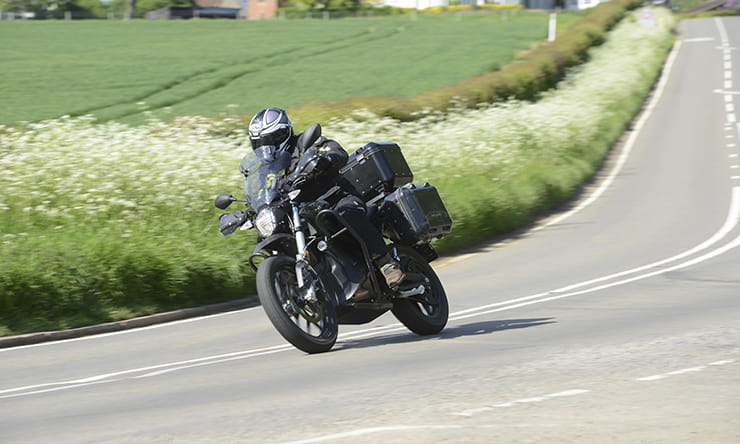 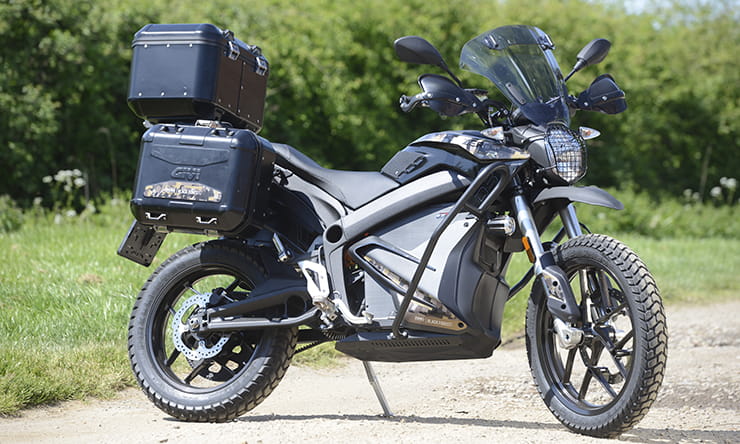 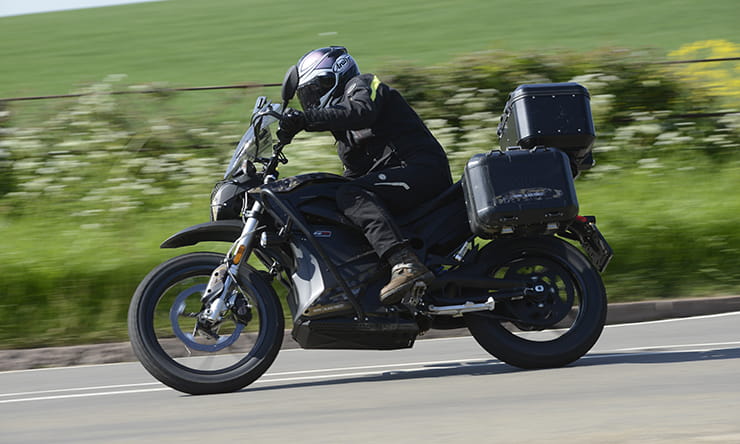 Californian company Zero has been around since 2006, building electric motorcycles for commuting, trail riding, supermoto and street. And they all have more torque than some litre sportsbikes.

Now the company is dipping its toe into the highly lucrative adventure sector. As the member of the team with the most ‘Zero-miles’ under my belt (I’ve sampled both the Zero S & Zero DS before) I was sent off to ride the Black Forest. Not the cake, or the place near Stuttgart.

The Zero DSR Black Forest Edition takes the company’s do-it-all trail bike and adds extra range, luggage and protection. But does it answer the critics that say electric bikes are too expensive, too slow to recharge and too mileage-limited? 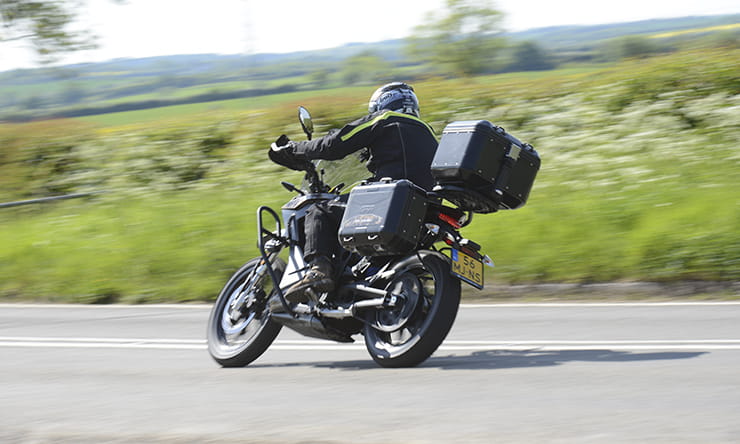 Okay, so the first point on the ‘answering the critics list’ isn’t going to go well…

The DSR Black Forest Edition (DSR-BF) is not what you would call cheap. It costs £17,285 and that’s after you’ve claimed back £1500 from the government. If you want the higher-capacity charge tank, as featured on our test bike, you’ll need to pay an additional £2,300.

As with all electric vehicles (EVs), nothing is ever that simple though. There are some other financial kickbacks that you should take into the equation:

• EVs currently pay no road tax in the UK 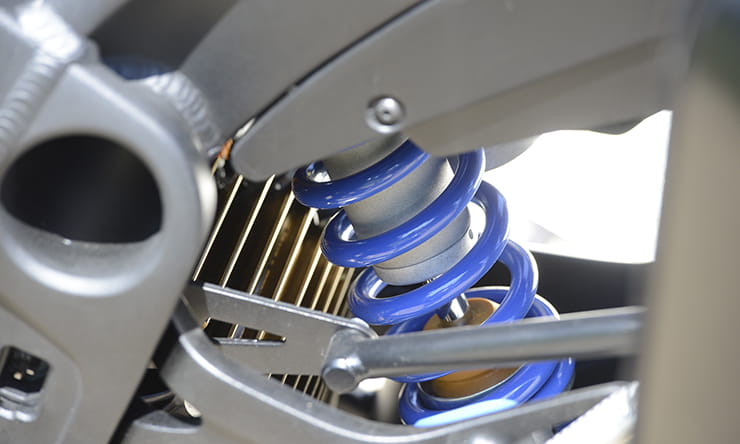 The electric motor in the DSR-BF makes a tyre-shredding 146Nm and 69hp at 5.300rpm. These figures are all claimed by Zero but as this is an electric bike, with no gearbox or other variables to affect the numbers, I’d say it was about right. It certainly feels like those are the kind of numbers responsible for firing you at the horizon when you release the flow of electrons from battery to motor – or open the throttle if you are octane inclined.

If you’ve never ridden an electric bike you need to do it; they get down the road like nothing else on two wheels but, more on that later. 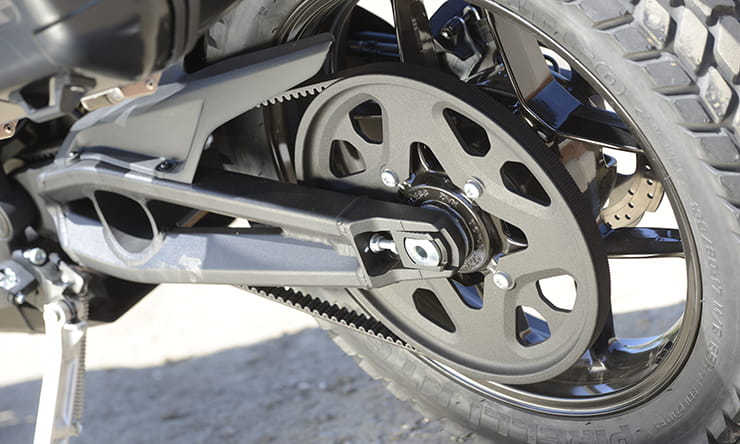 Turning electrons into motion is the job of Zero’s own Z-Force75-7R passively air-cooled, radial flux, interior permanent hi-temp magnet, brushless motor. Yup I have no idea what that means either, well I do, kinda. The motor is brushless meaning it doesn’t have any connections from the rotor (the bit that spins and has the wires wrapped around it) to the stator (the exterior of the motor that houses the magnets) this helps reduce friction and increases power and responsiveness. Basically it’s a bigger, tuned up version of the motors you get in top-end RC-Cars.

Being brushless also means the control of speed is done digitally via an ECU that in the Zero is tuned in such a way that the first crack of the throttle is neutered enough to keep the front wheel down; it’s only when the bike is up to about 10-12mph that the full force of the motor kicks. It’s similar to a power-band but it comes like an EMP, sending you down the road like nothing else this side of the £20k superbikes. 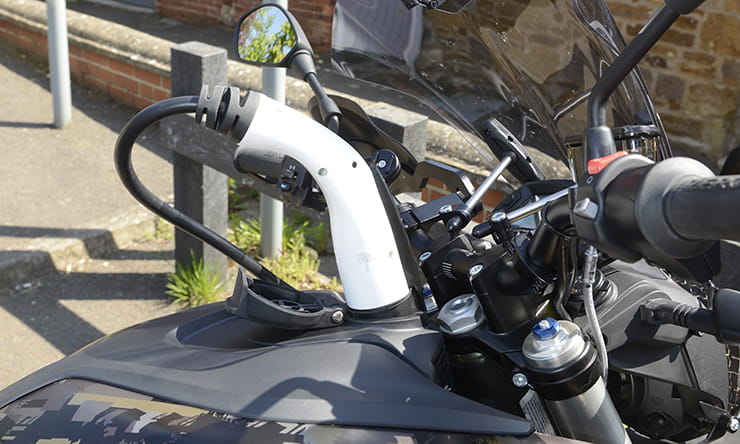 Now this is where it all gets complex. All these figures are claimed – it was too tricky to perform an accurate range test on the launch. And these figures do relate to the standard Zero DSR, not the Black Forest edition. With all its extra panniers and crash protection, increased drag and extra weight, you would think that would have an effect on economy a bit.

On the launch the bike went from about 60% charge down to 20% after about 45mins of fast road riding. We were going about as quickly as you (legally) can on these bikes, across some seriously undulating countryside. All of these things take their toll on the range of any vehicle, be it a clean, lean electric one, or one that runs on old dinosaur remains.

My point is that I cruised London on a Zero through traffic all day and used less juice then I did on this fast blast through the countryside. Getting decent range is all about how you ride it; hammering it along is fun but it won’t last long. 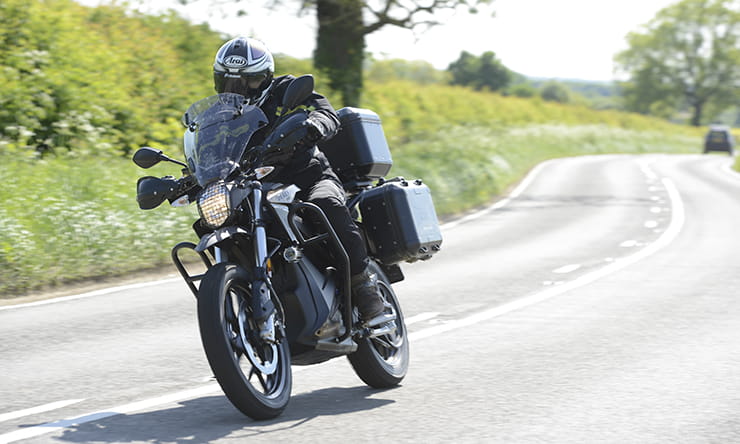 To ride, the off-road set-up of the DSR-BF was just firm enough to be useable but with quite a bit of dive on the brakes. It does though ride bumps and uneven roads with hovercraft like smoothness yet still holds a line in corners well. Put it this way; I just about kept up with Zero’s PR man, who rides these bikes daily (and was on the sporty, naked Zero SR with its firm suspension and Pirelli Diablo Rosso tyres)!

All Zeros hide their weight well, and the Black Forest Edition is no exception. Flicking the bike from ear to ear on the B664, it changed direction with ease, despite its slightly gangly suspension and Pirelli MT-60 knobbly tyres. Under really hard braking the front end does dive and you feel some complaint from the front rubber but no more than any other trail tyre-shod trailie would. 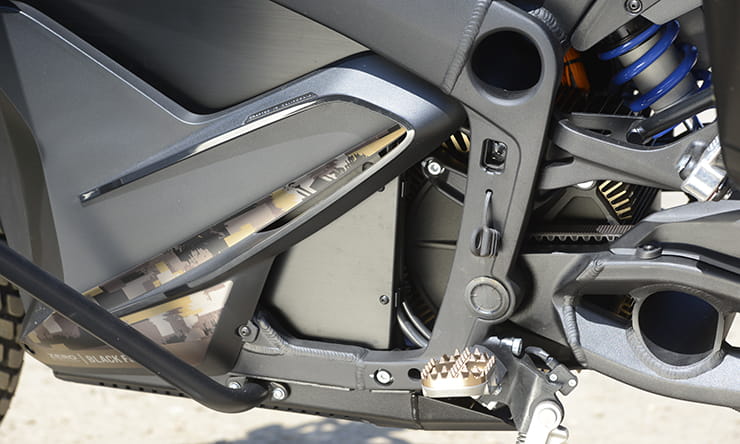 Providing the resistance to this electrical force are J.Juan discs front and rear. The front is a 320mm floater and two-piston caliper, rear is a 240mm disc and single-piston sliding caliper. The front brake is surprisingly good, with plenty of bite and feel – if anything the only limiting factor were the tyres. The back brake set up is slightly less positive but still provides enough help with low-speed control. 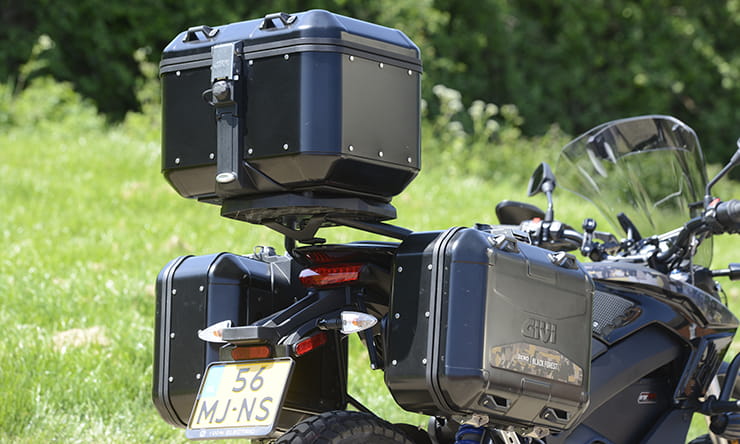 The production-ready version of this bike is going to be graced with a plush Alacantara seat for added long range capability. Sadly that wasn’t ready for us on the launch day but it’s not a problem; I spent about seven hours in the saddle of the DSR when BikeSocial took on the London Marathon route. The seat comfort is spot on and if the new seat is as nice as it looks in the press shots this should be a bike you can ride all day. Or at least until the battery runs out.

The handle bars are an easy reach for even this vertically challenged road tester (I’m 5’7”); The whole riding position is neutral, I didn’t feel cramped at all but did find the bike a tad on the tall side. The only time I noticed it was when trying to turn the bike in the road – I ended up paddling the thing around like I was on my CBT. Not cool. 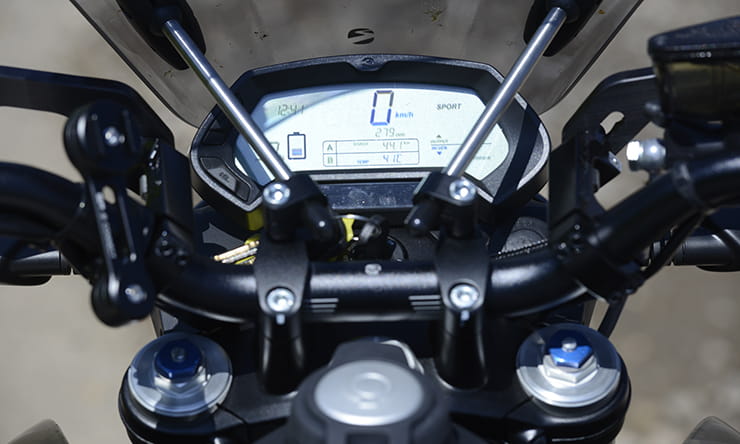 For the roads we were on I had the bike in its Custom riding mode. This gives maximum power and torque but retains the maximum battery regeneration (when coasting with the throttle shut the motor recharges the battery). The other riding modes available are Sport, Max Power and Torque, No Battery Regeneration and ECO, which brings the bike’s power down considerably and limits the acceleration and top speed. It’s still quick in ECO, just not quite so urgent as the other modes.

A cool feature of the Zero is that Custom Mode is just that; configurable to your needs via an app and changes the settings with the magic of WiFi – very 21st Century. The menus are all controlled from the right handle bar – it’s all well laid out and easy to use. 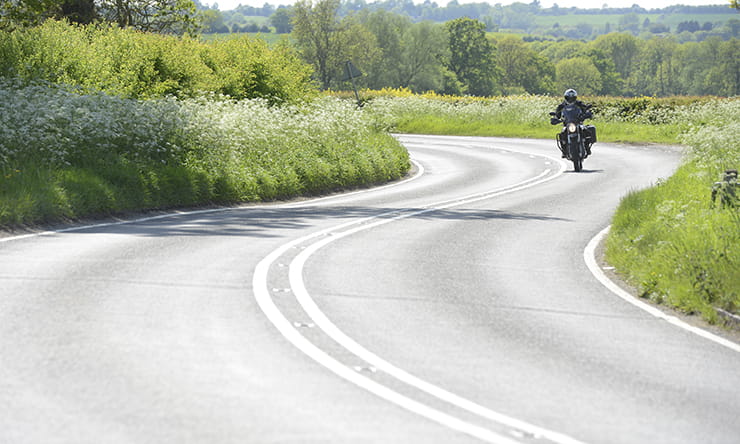 It’s no denying the Zero DSR Black Forest Edition is a cool bike but then again it would be; all the other machines in the family are great bits of kit. With this motorcycle Zero has done a lot of work to make it as good off-road as it can, but sadly the lack of charging infrastructure is what will let it down. To go properly off the beaten track you would need to pick out towns or cities along the way to allow you to pour some more electricity in the tank.

The other factor is the price; if you take the charge tank, which drastically reduces charge time and gives better range, the DSR-BF would come in at about £20k. That’s Ducati Multistrada 1260S money and yes, I can only get about the same amount of miles a tank out of my Ducati long-term bike, but I don’t have to worry about finding a plug socket when the tank runs dry.

Don’t get me wrong, EVs are the future, they have to be, and they are going to get better. With countries like the UK and France pledging to ban sales of petrol cars in the not-too-distant future, the infrastructure to keep these things going off into the sunset and beyond cannot be far behind. 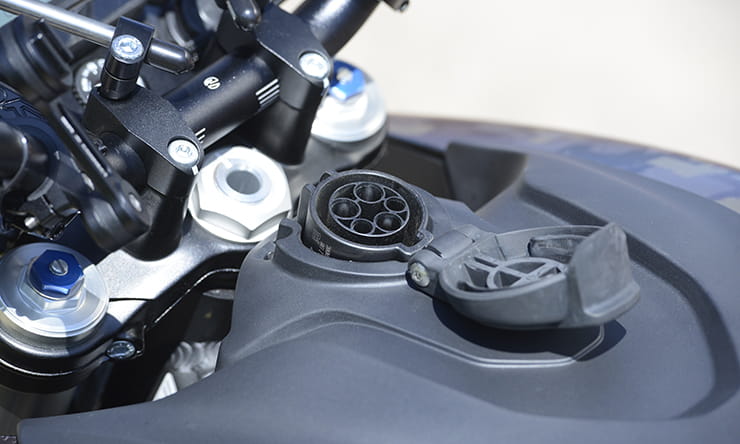 For more information on the Zero range, click here.