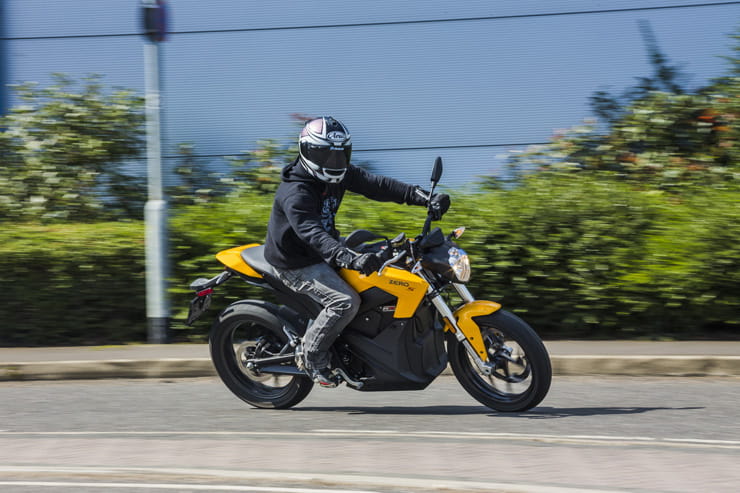 Here at BikeSocial we love nothing more than getting to grips with the latest tech. So, when Zero gave us the chance to ride their latest learner legal electric bike we jump at the chance.

CBT licence laws for petrol engines in the UK state that:

CBT licence laws for electric bikes in the UK state that:

The key word highlighted above is important. The continuous power of an electric motor, for licence validation, is measured over a set period of time. Peak power is not measured. 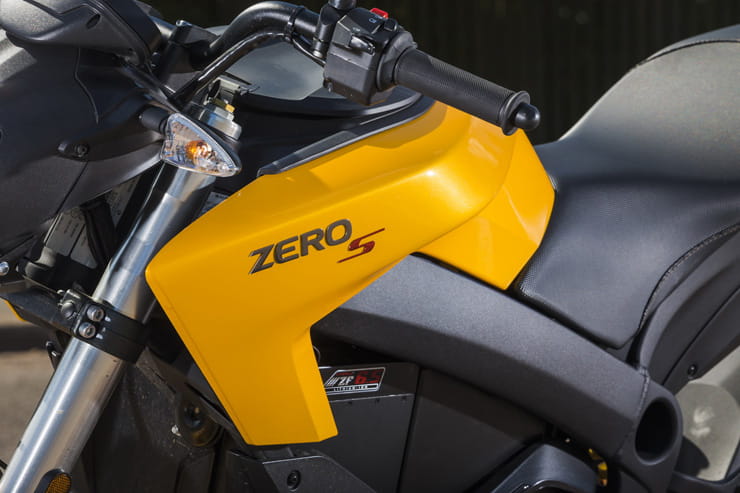 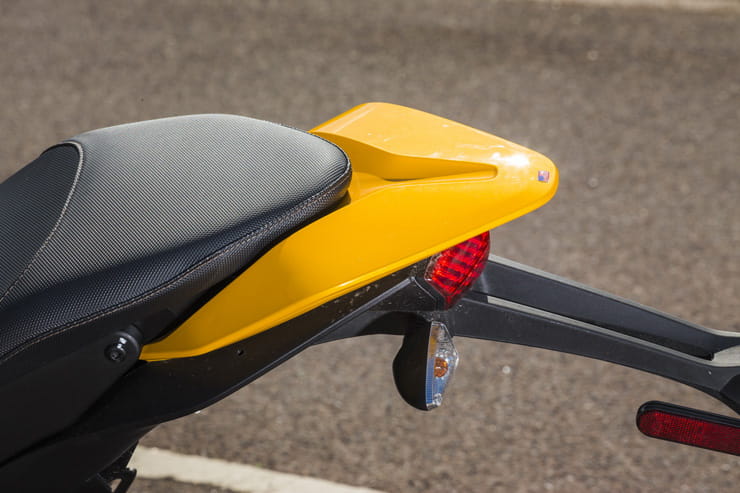 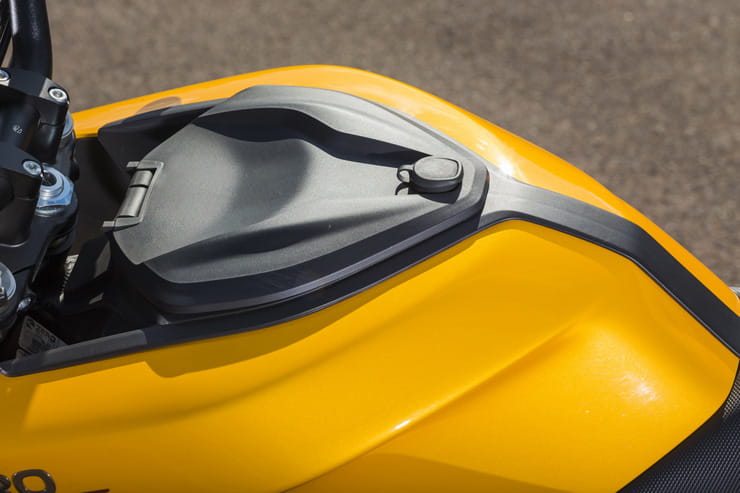 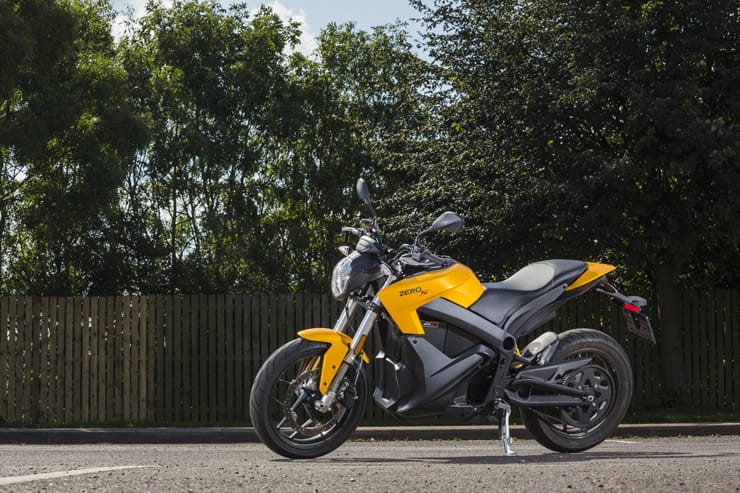 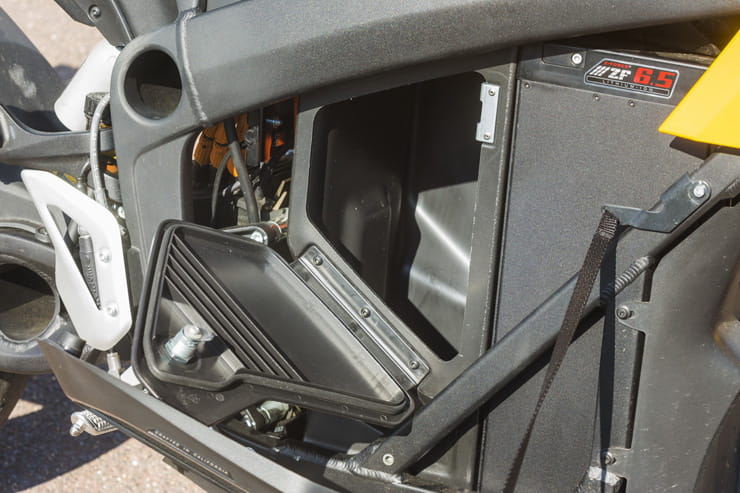 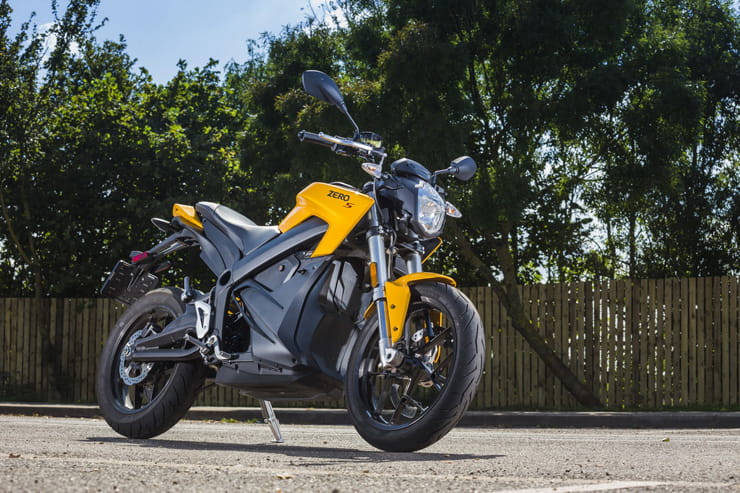 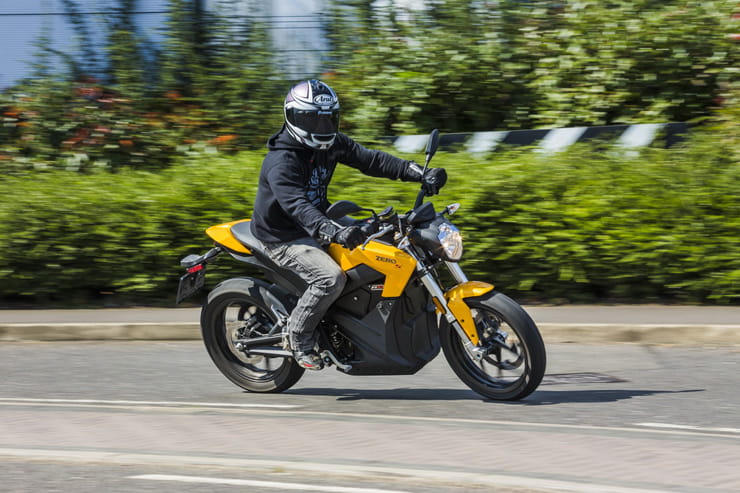 The Zero S has 31bhp peak power – making it twice as powerful as other internal combustion engine motorcycles. The power is great but it’s the torque that is Zero’s biggest win over internal combustion engines. Electric motors make all their torque from a standstill. The Zero S has a mind boggling 78lbft of torque (roughly the same as a 2001 Suzuki GSXR1000!) meaning you have a wickedly enjoyable bike to zip between the lights!

With all that torque on tap you would think the Zero would flip over at the slightest flick of the throttle but it doesn’t. Zero have given the bike smooth power and torque curves. You can crack the throttle wide open from a standing start and the bike just surges off down the road. The front goes light, but never lifts. The bike pushes on, surfing a seemingly never ending wave all the way to 80mph, when the bikes ECU limits the top speed.

The Zero S is built around a conventional twin spar frame. The suspension is adjustable from Showa. The brakes are single discs front and rear from a Spanish company, J.Jaun. ABS is standard and supplied by Bosch with tyres from Pirelli.  Housed where the petrol engine should be is a large container that houses the battery or batteries more specifically. These are Lithium Ion (Li-Ion) battery packs, like those found in most lap-top computers and mobile phones. 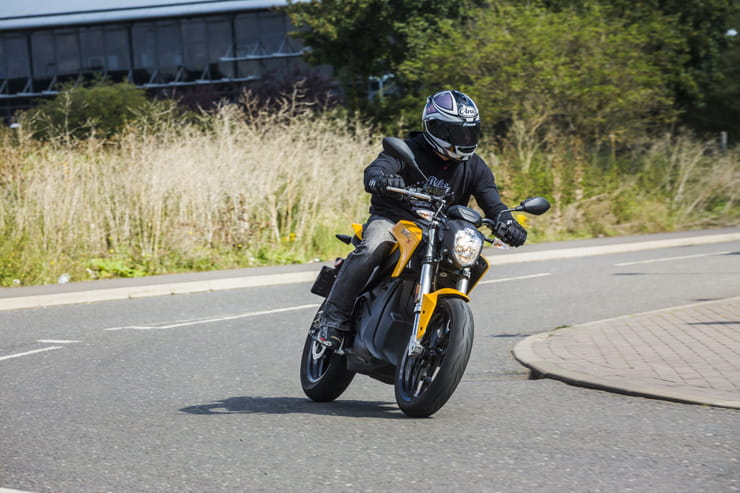 Okay, there are a few things to get over:

1. You will wave your left foot around trying to engage a gear lever that isn’t there

2. You will pull in an imaginary clutch thinking its going to stall

3. You will stop feeling like an idiot after about an hour of riding

For the most part the Zero is like a conventional petrol bike to ride. The ignition key powers up the system and the dash and tacho run through the obligatory Blackpool illuminations procedure and then nothing. No humming, no buzz just silence. Twist the throttle and the bike moves eerily forwards making the kind of buzz you get from a Scalextric car. There is no clutch, no gears just twist and go. 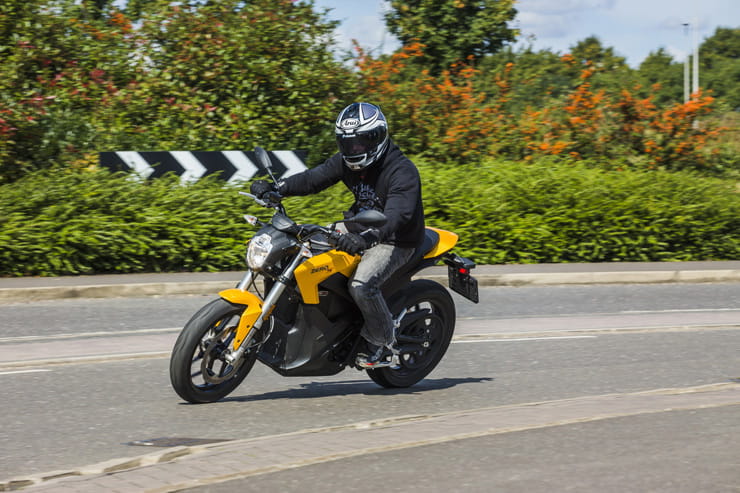 Once you get into actually riding the Zero and not giggling to yourself at how weird it feels, it makes a lot of sense round town. And not just because of the grin inducing acceleration. The bike is so slim its like you are sitting on nothing it reminded me of the riding position of a friends KTM EXC enduro bike. The bars are wide and perfectly positioned, the pegs are quite low again echoing an enduro bike's footpeg location. The seat is firm but comfy and good for an hour of riding. The seat is also sculpted which helps you to bolster your upper body when you pull away. I’m 5’7 and for me the ergonomics are spot on.

To start with the Zero’s suspension was painfully firm. Not only did potholes hurt if you hit them, the bike would seem to tie itself in a knot if you opened the throttle too much mid corner. I took three clicks of rebound out of the rear shock and found the bike much more compliant. It still wasn’t completely cured of its mid corner nervousness but it was better. With more time and more front end adjustment, I’m confident I could have got the bike cornering with confidence. Weighing in at 142kg, the Zero is only 5kg more than KTM’s Duke 125. It flicks from side to side with ease and makes playing in traffic a breeze. 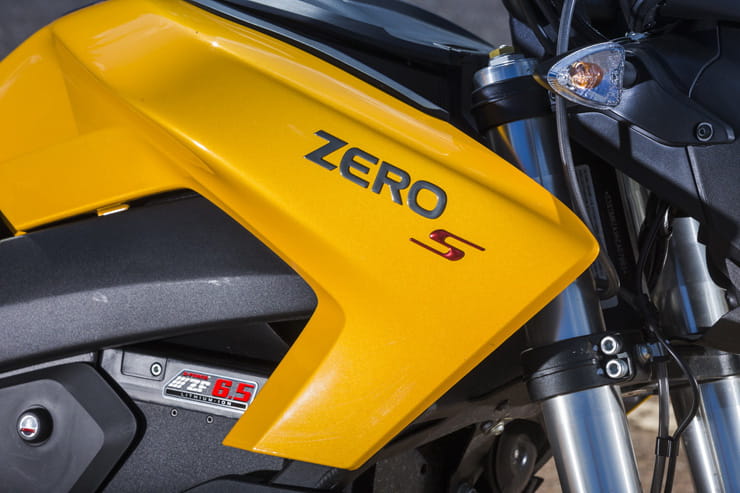 The brake setup was great. The front brake is a 320mm disc and twin pot caliper that works well. The lever has a quality feel to it and gives a progressive brake, great for riding around town. The master cylinder setup is unlike anything I have seen. The brake fluid sits in what can only be described as a tiny fish-tank on the right hand handle bar. It is completely transparent and quite pleasing to look at. It also gives a great view into the reservoir for brake fluid inspection. The ABS system is typical Bosch, cutting in right at the last minute under the hardest braking in a smooth and unobtrusive way. 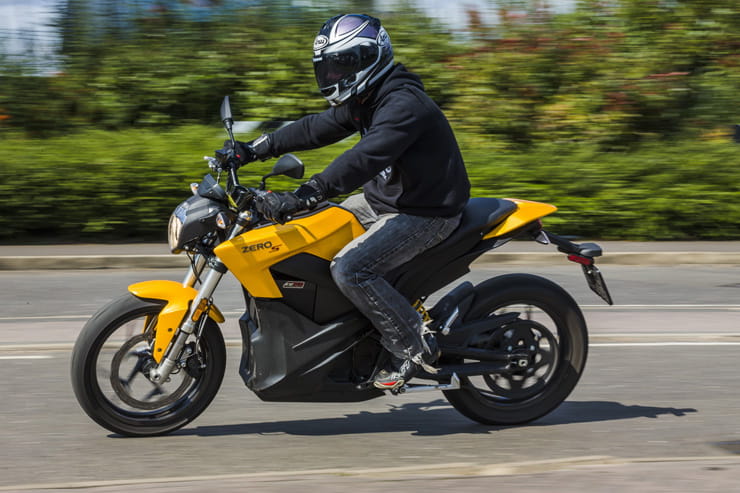 How do other road users react to it?

The Zero made me realise there are so many things that you take for granted when riding a petrol bike. On the Zero you can hear everything, the couple in the car next to you at the lights arguing about who is going to do the dishes that night. The front brake as the pads bite into the rotor under hard braking. It isn’t all novelty ear pleasing elements though, people do not hear you coming. Pedestrians will step out in front of you and cars will swap lanes at will, completely oblivious to your progress to the front of the queue at traffic lights. One poor chap on a Suzuki GS1000 nearly had a heart attack when I silently appeared on his left hand side at a set of lights.

You have to completely change your riding style and I found myself becoming over defensive in all situations just to be on the safe side. 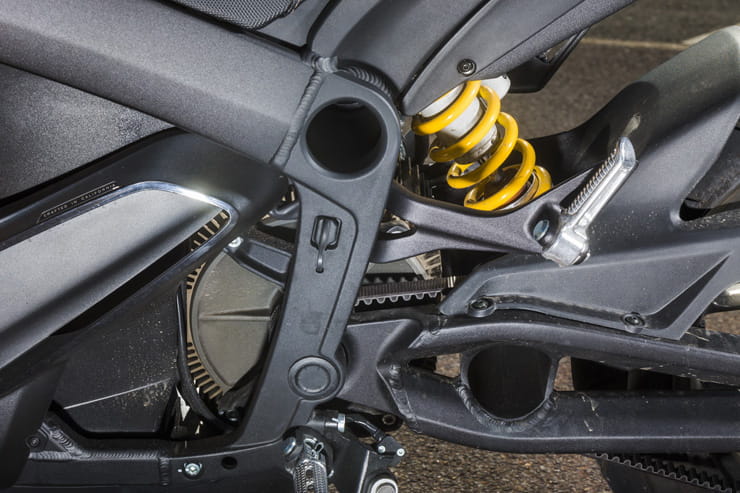 What is the cost?

So, here is the elephant in the room; the Zero SR 6.5 costs £10,690.00. For most people looking to take their first steps in the world of motorcycles the Zero will be too expensive when compared to a conventional petrol 125 – KTM’s class leading Duke 125 has an RRP of £4099 and cheaper deals can be had. But there will be a group of people living in the UK’s larger cities with more disposable income that will appreciate the benefits that this bike has to offer. If for instance you lived in London and worked five miles from the office and had the facility to charge the bike while at work, the Zero would be an ideal machine.

Its costs pennies to charge and the usual costs associated with petrol engines, such as services, oil changes and mechanical break downs, are negated massivley. Yes, there may still be reliability issues with other mechanical areas, brakes, suspension and ancillary electronics but the quality of the components used by Zero should go some way to minimizing any unforeseen outlay.

If you buy a Zero (or any electric motorcycle) you are also eligible for a £1,500 plug-in motorcycle grant. The Zero is also exempt from paying the congestion charge and with it looking likely that motorcycles will soon have to pay to enter central London’s Ultra Low Emissions Zone, the Zero seems to make more and more sense for those living in ‘The Big Smoke’. 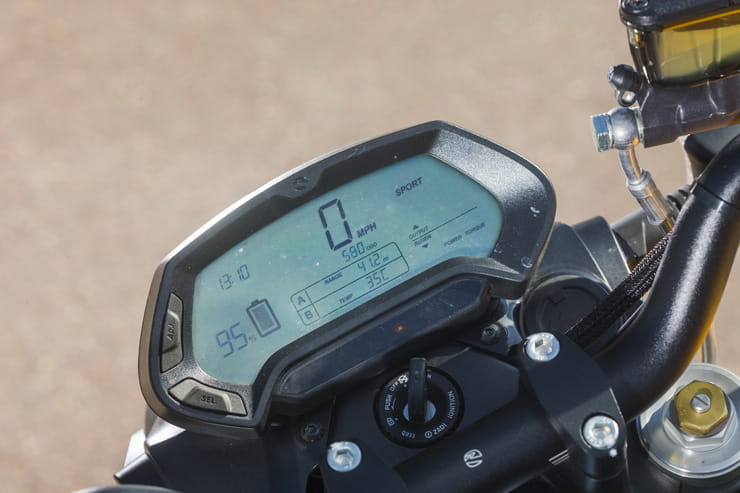 What is the charge time and range?

The three pin plug will charge the Zero to 100% in about 4 hours. There is a quick charger coming next year which should half that time. The quick charger will also mean the bike can be plugged in to the charging points that are cropping up in city centre up and down the country – great if you need to top up the battery while you grab some lunch.

Zero claim a mileage for this bike of 81 miles of city riding and 49 miles of cruising at about 55mph. On the day I collected the Zero I rode from Peterborough to Coventry and had to stop off in Market Harborough to top up the battery. I'd managed about 35 miles and had about 7% battery remaining. A friendly chap from an MOT station allowed me to plug the Zero in and I went off to grab some lunch. A couple of hours later the bike had 50% battery and I set off again for Coventry. I rolled onto my drive at home 33 miles later with 1% battery left. The bike had started to go into battery saving mode and the power had reduced, the acceleration felt on a par with that of a 50cc twist and go. I could have probably managed a few more miles by running in Eco-Mode, off the throttle coasting would have regenerated the battery a little, but it was my first time on the bike and I was having too much fun!

Along with eco mode there is sport mode - full power and shortest range - and custom mode which allows you to configure the bikes power system through an app, yes the Zero is Bluetooth enabled! For me the pre-programmed modes worked fine and there was a noticeable difference in performance when switching between the two. 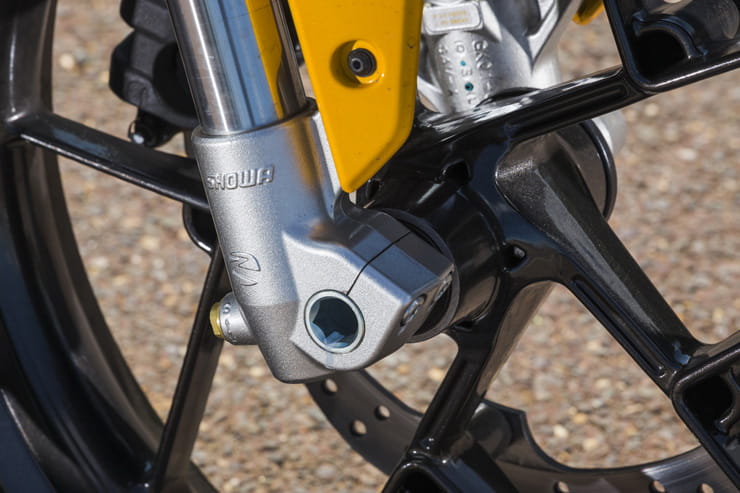 You can tell the bike has been designed in (and possibly for) a warm dry environment. The swingarm design includes a large hollow tube just behind the swingarm pivot that will be a pig to clean after a winter commute. The top of the motor is also exposed to the elements with red anodised cooling fins on top to aid heat extraction. After about 10 miles on tarmac roads the cooling fins were full of stones, dust and dirt. This was in the dry, after a wet or slightly muddy road they would be caked in muck – I’m not sure I fancy jet-washing an electric motor! The styling of the Zero is, as far as I can gather from the people I spoke to, a success. There are some electric bikes on the market that seem to shout about the fact that they are an electric vehicle. The Zero does none of this. The overall look of the bike is clean and understated. 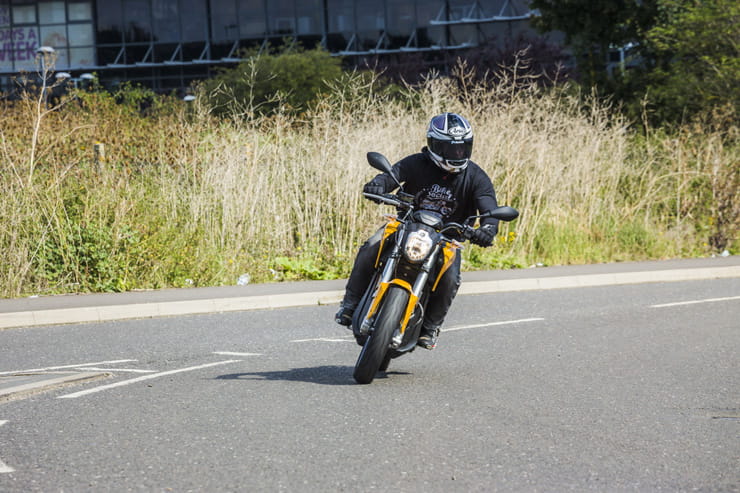 The Zero S 6.5 is a great piece of kit. It functions perfectly and handled all the abuse I could throw at it. That said it is not without its faults; the Zero S 6.5 has a range of about 50 miles. There is a range extending battery pack that sits in the bikes ‘fuel tank’ coming next year which should help if you need to go further but if you are looking for a long distance tourer with cross-continent capability, this is not the bike for you. That isn’t to say they could be one day – the progress made with electric bikes is relentless. The first electric race at the Isle of Man TT – known as the TT Zero – took place in 2010 and was won by Mark Miller at a speed of 96.8mph. Bruce Anstey won it this year at a speed of 117.7mph. Combustion engines didn’t progress that quickly!

The second draw back is the cost. For most the Zero is simply too much money to warrant taking the plunge into electric vehicle ownership. There are also a number of factors around repair after an accident, insurance and servicing costs that may put people off.

If I were in a position to, I’d buy a Zero tomorrow. Not as a sole bike in my garage, it didn’t make the hairs on the back of my neck stand up, I’d still need to consume some fossil fuel to get that fix. It is something different though and for some journeys that I ride regularly, the Zero makes perfect sense. Is it ready to take over? Not yet, but one day it will have to.

For more information on the Zero S and the other bikes in the Zero range, click here. 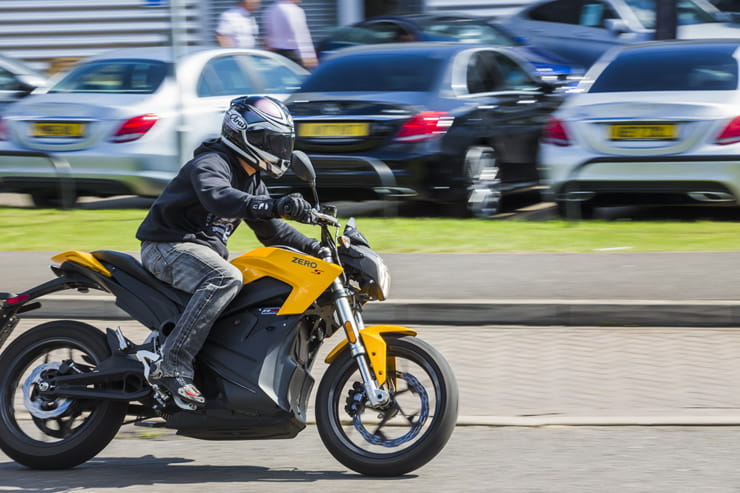