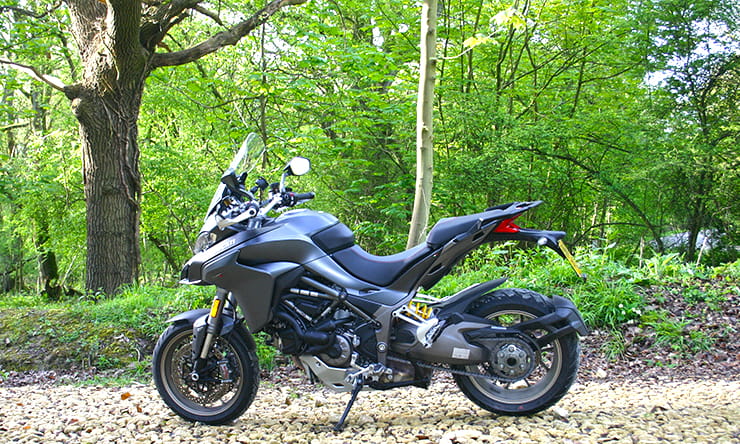 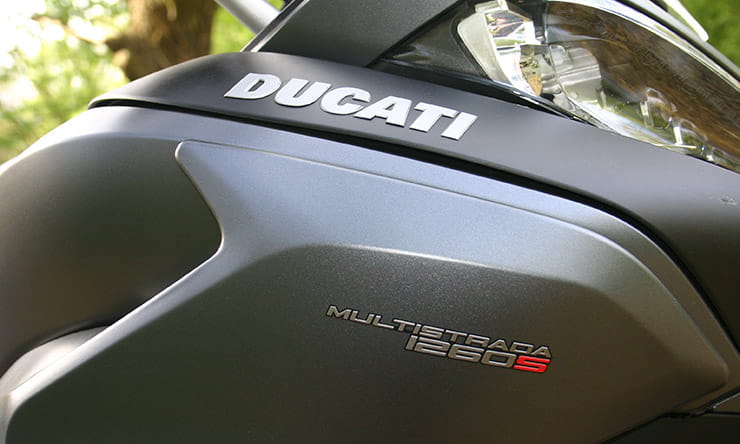 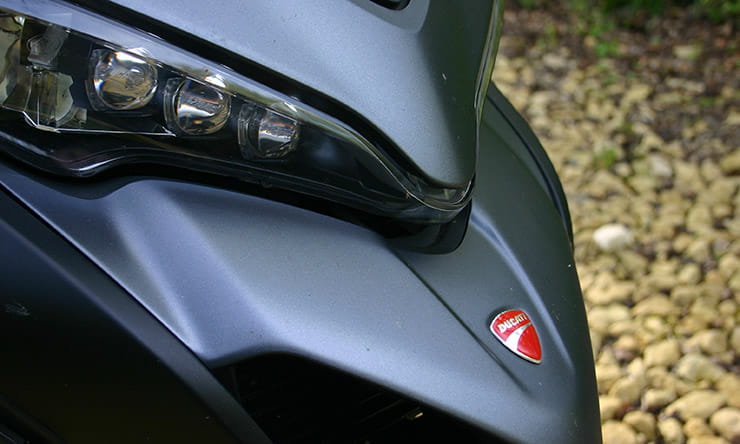 I like Ducatis, no, I love Ducatis. There’s something about the sight and sound of the red-bikes that ignites a childish fire inside me. And after riding the Multistrada 1260S for the first time, that still applies to big Volcano Grey ones.

Okay so BikeSocial boss Steve Rose wasn’t completely won over by Ducati’s new flagship tourer, and that surprised me. I was lucky enough to be the first member of the team to swing a leg over our new long-term test bike while everyone else was looking the other way. It took me about 10 minutes to draw my conclusions about it; I loved it. And here’s why. 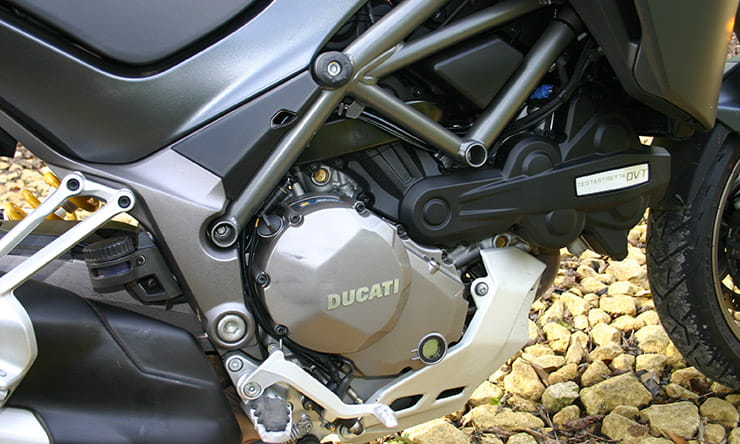 The 1262cc Testastretta engine is a peach, with a Jekyll & Hyde character depending on the mode selected. In ‘Sport’ you get the full fat 156bhp with a peaky top end and less torque down low. The Ducati Quick Shift (DQS), which Steve hated, changes gear like a battering ram with virtually no electronic attempt to smooth the up-shifts or down-shifts. The DQS in Sport mode doesn’t change smoothly unless you are higher up the rev-range which is a little strange I guess. So I just adapted the way I rode. If I was bimbling round town I’d use the clutch and if I had the hammer down and needed to make progress, I’d use the DQS. In Sport mode the engine also doesn’t come alive until you hit about 3-3.5k rpm. In higher gears lower down the rev-range it stutters and struggles. It’s a Ducati and Sport mode means Sport mode! On other tourers the sporty engine mode might give you a lot more bark and a bit more bite but the Multistrada is all about the bite. If you want to get the most out of this mode you have to be riding quickly, that’s what it is designed for and that’s what I think the engineers who built it would want. 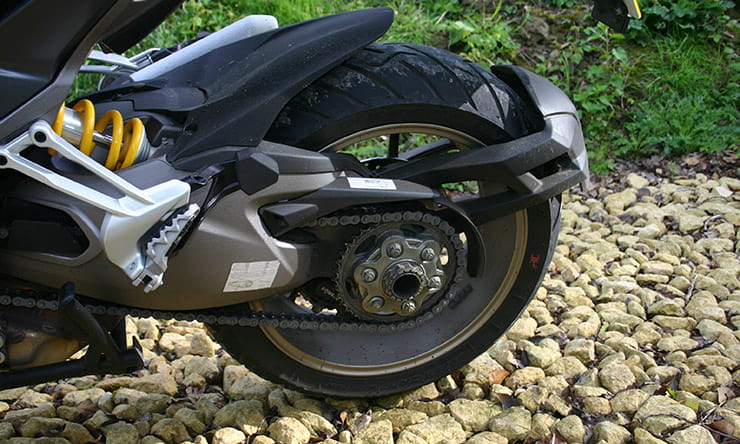 Touring mode is a completely different experience delivering the same power in a much more measured way - it’s less like an Italian waiter with his hair on fire and much more comfortable for distance work. The bike no longer struggles at low rpm and pulls more freely from the bottom of the rev-range. The urgency under acceleration is still there but in a much more progressive manner, it still feels like a mightily quick bike, just more refined and composed.

I also found in Touring mode the DQS was much more inclined to shift when I asked it to, rather than when it wanted to. The gear change no longer engages in the same brutal manner as Sport mode did, and the ECU and fly-by-wire throttle now work together to soften the shifts. There’s a slight ‘blip’ of the throttle on down changes which, combined with the slipper clutch, makes for a silky smooth ride. 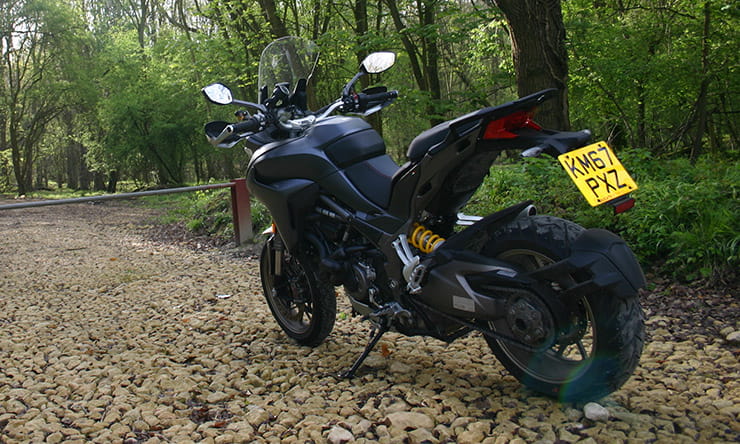 I find the 1260S to be supremely comfortable. I’m not the tallest chap in the office – I’m not the shortest either – and can safely get a foot down on either side (looked more like a couple of toes to me – Steve). Most adventure bikes make me slide off one side at the lights to stabilise the bike which isn’t ideal. Ducati have pulled a master stoke with the 1260 by making it easy for shorties like me to get on board. The waist of the bike is contoured and thin at the front of the seat but then tapers out to create a large, flat and comfortable seat that gives a commanding view of the road ahead.

The bars are perfectly positioned for me and mean you are sat in a neutral position, not bolt-upright but leant ever-so-slightly forwards. This helps to keep some of your body weight on your arms and off your lower back - perfect if you are going to be riding all day. The pegs on the 1260S are placed fairly high, to help ground clearance, which does detract from comfort a little. I haven’t spent more than three hours in the saddle yet though, so will report back on this later. 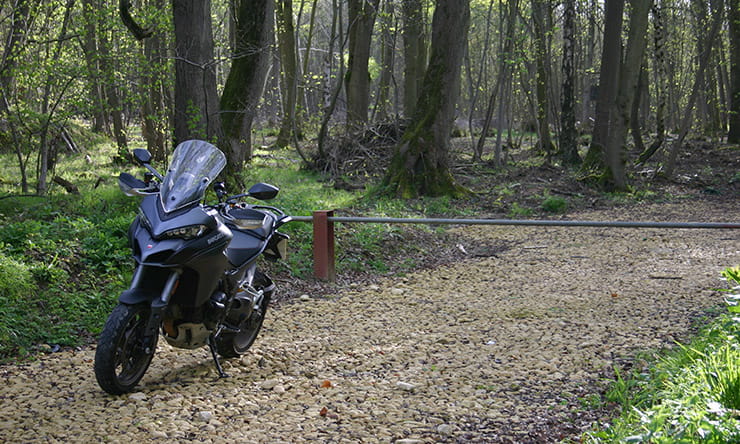 The manually adjustable screen on the Ducati is simple to operate with one hand while on the fly and provides a decent level of protection. If I sit in my normal riding position on the bike, the top of my lid is just inside the bubble making cruising at motorway speeds a quiet, comfortable affair. If I sit up slightly my helmet starts to get buffeted by the wind though. I could imagine for taller riders this might become tiresome and an aftermarket wind deflector might be needed. 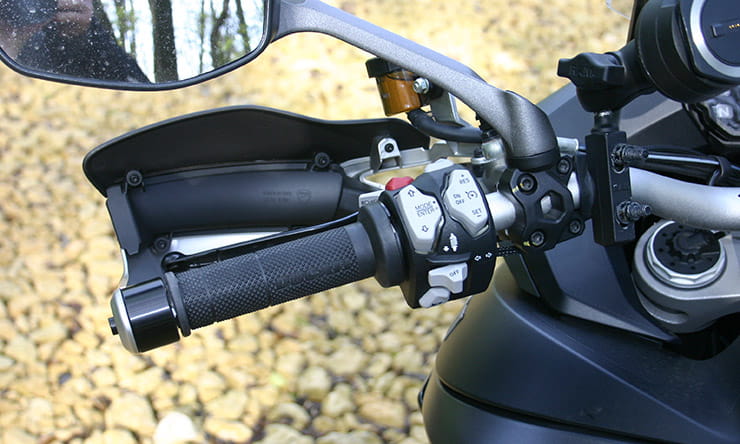 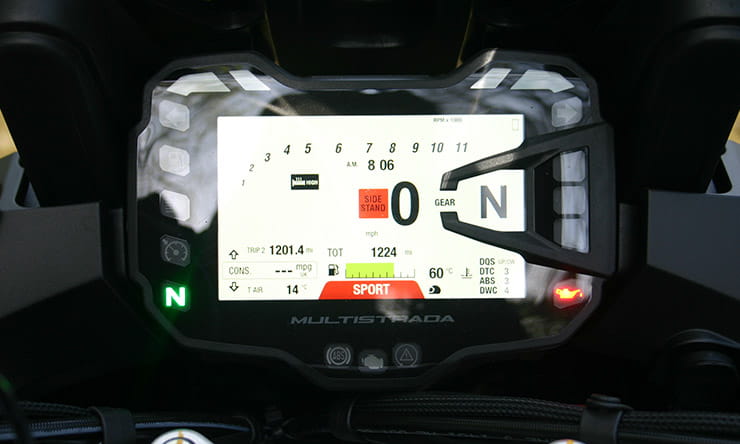 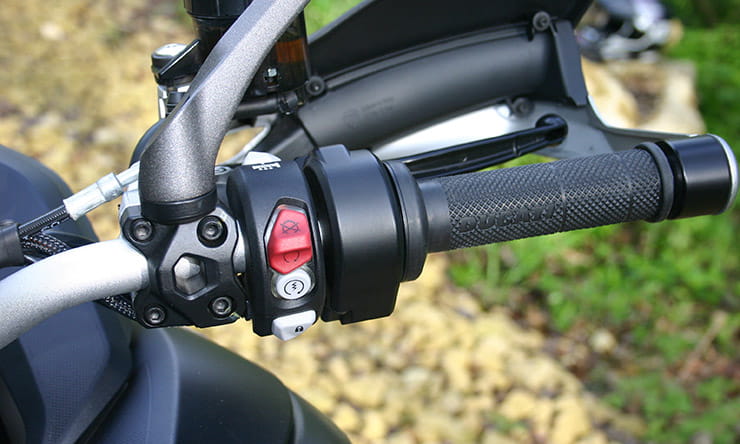 The three-stage heated grips and standard fit hand-guards are excellent, heating up quickly and holding their temperature consistently. Some grips I’ve used heat up fast, but then dull down after a while. The Ducati’s don’t do this and even on a chilly 3°C ride to work, I found the medium setting to be plenty warm enough. 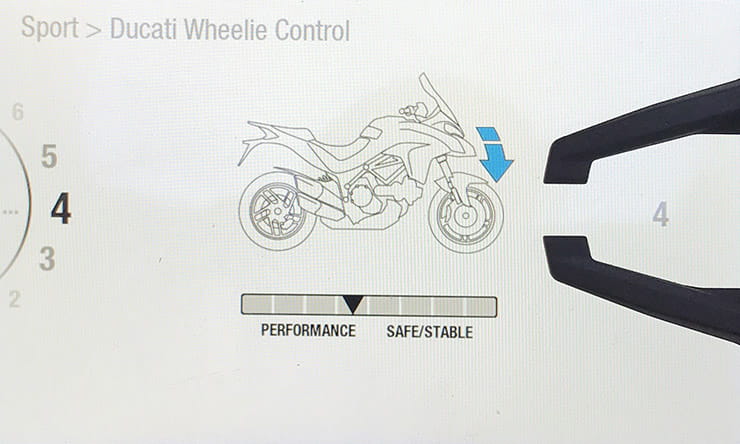 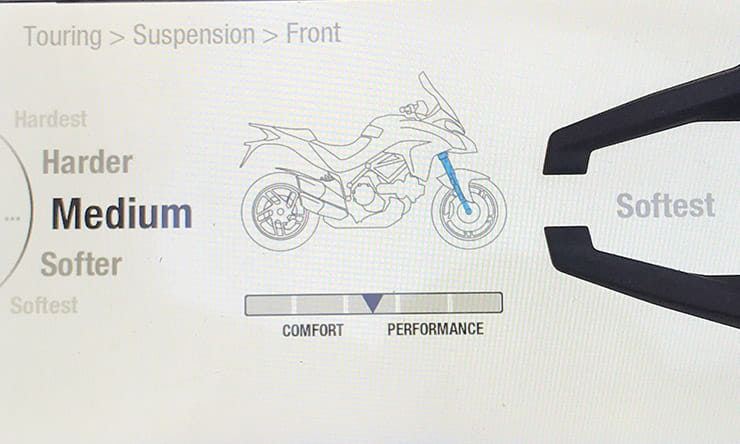 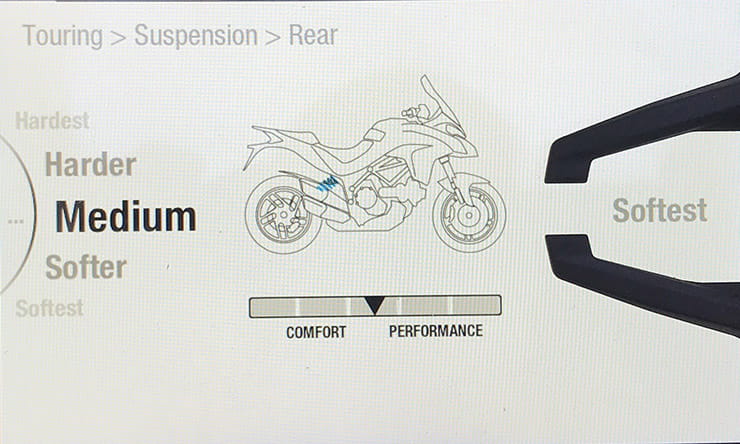 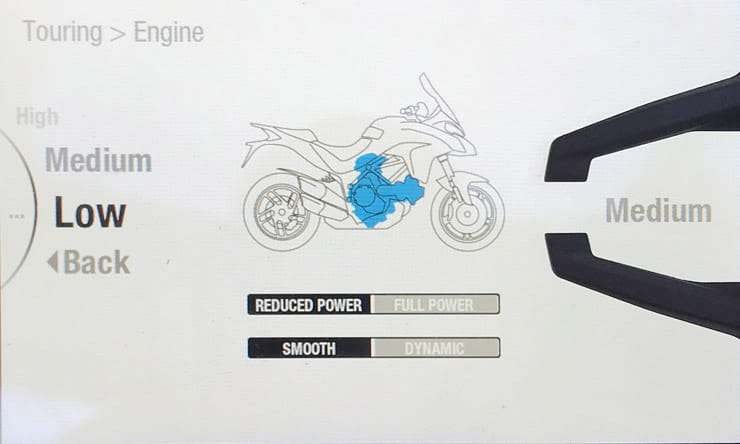 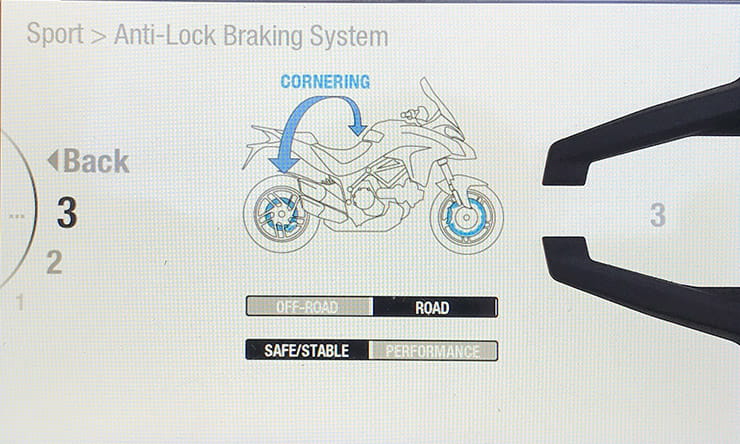 There is a mind boggling array of settings to alter but its easier than cracking out the C-spanner!

This is the most confusing thing about Steve’s and my own experience of the big Ducati. Where Steve found the bike frustrating and hard work, I find it simple and easy to ride. I don’t know whether it’s my self-confessed love of Ducati that’s overriding the pitfalls of the bike or the fact that I have less of a history of riding big tourers, that means I don’t have as much to benchmark the 1260S against. Or maybe Steve just rides like, er, Steve. It’s not like I’m a complete ‘newb’ to this world of big capacity, big bikes, I had a KTM 1290S Super Adventure for a few weeks last year and spent about 1000 miles at the helm of the Honda Crosstourer. And I still find the Ducati to be better than both of them, in every way; more refined than the KTM and more exciting than the Crosstourer.

I guess we’ll put this down to personal preference and it goes to show that what works for one may not work for another, even comparing bikes that, on paper at least, are very closely matched. One thing I can say is that I’m loving my time with the Multistrada, whether it’s a trip to the shops, a commute to work or blasting along the B672 for fun. I can’t wait to start putting some big miles on my big grey mate throughout the summer. 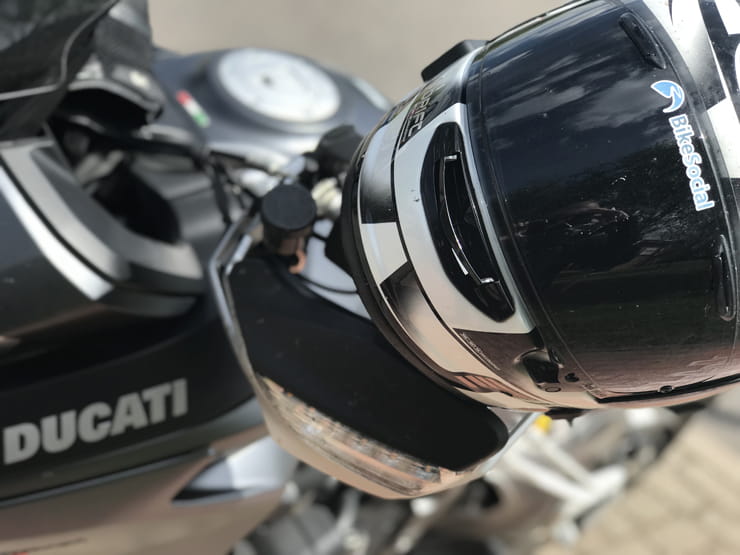 Sorry darling. It’s not you, it’s me. I read the spec-sheet, read the reviews, listened to the conversations when Michael came back from the press launch and I wanted to be part of it.

But here’s the thing. As I get older I become more in love with motorcycling…not motorcycles. The bike has become less important – it’s the experience, the ride, the feeling of middle-class, middle-aged lawlessness that I get that makes me choose a motorcycle every time I need to be at B… often via F, J, M or Zed.

On the odd occasions I might want a bike to challenge me, I have a tuned Yamaha TDR250 in the shed – probably the craziest and most pointless motorcycle ever - that is as tricky to ride well as any great two stroke supermoto should be. The fact that I’ve done less than 3000 miles in the 14 years I’ve owned it says everything about the hooligan fantasy/reality balance in my biking life right now.

The Multistrada is a bike that demands your attention. If you enjoy making a bike as perfect as it can possibly be, then you’ll love it. If you think that having your suspension just-so for every corner will increase your riding enjoyment, then buy one. If you like the idea of taking a wholly unsuitable engine for touring and then controlling it with complex, programmable electronics till it does what you want and you are clever enough and well-understanding enough of motorcycle dynamics to make a decent job of said decision-making, then…good luck, you’re smarter than I am.

Some people love noisy, hairy Harleys, others love the purity of Honda engineering or the Maverick craziness of a great Yamaha. Some love challenging Ducatis, others are happiest hugging a 1961 Lambretta. We can’t all love everything and that doesn’t make something a bad bike, just not right for us.

As an interesting footnote, yesterday I collected a BMW R1200R for an upcoming road test. It’s another 1200cc twin-cylinder, 200+kg motorcycle with advanced electronics, multiple riding modes, clever electronic suspension, blah-de-blah-de-blah. It took less than half a mile to forget all that and just enjoy the sensation that great motorcycling gives because all those systems are completely unobtrusive on the BMW. I was halfway home before I even checked what mode it was in. So, it’s not the tech, as such that’s the problem (I also rode KTM’s 790 Duke last week, which has all the tech, but still manages to feel completely out of control half the time…in a good way), if a bike is right for you, then that’s what counts. 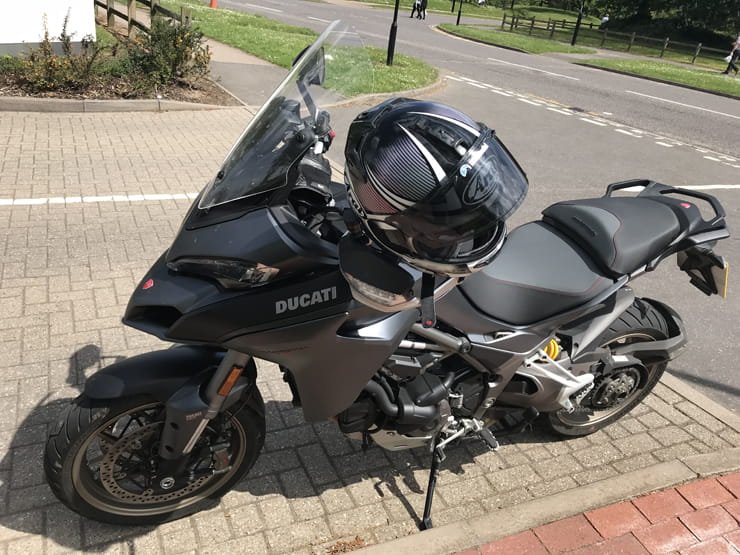