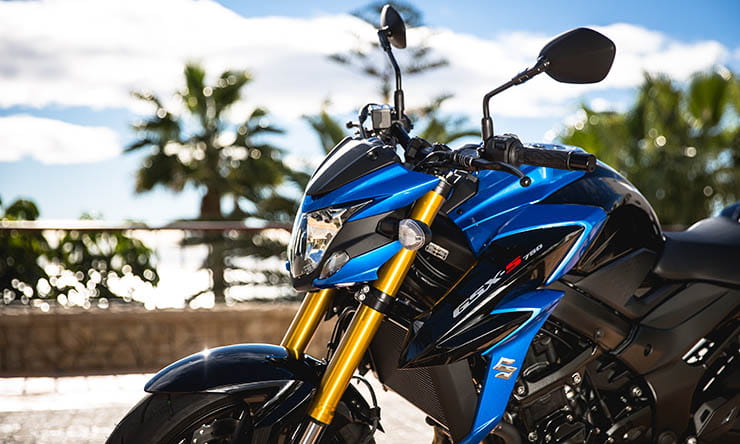 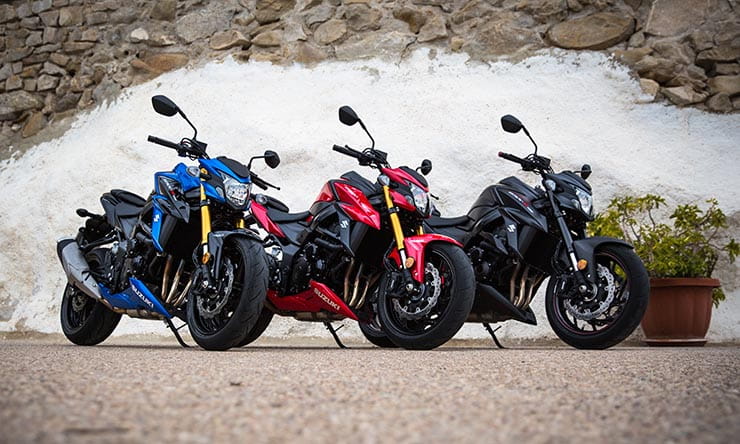 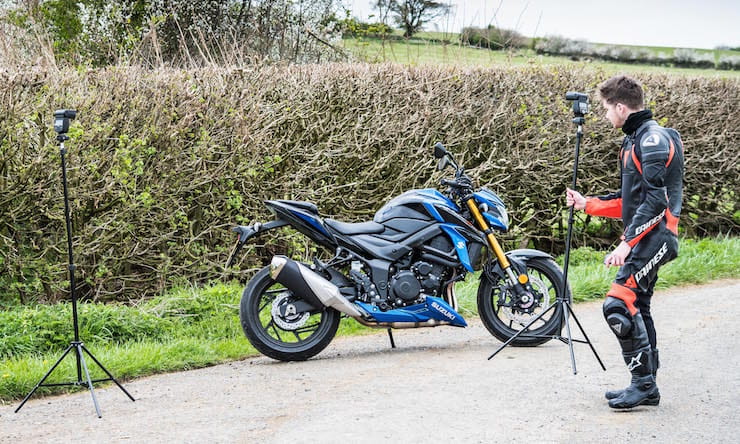 BikeSocial is running a Suzuki GSX-S-750 as a long term test bike this year. It arrived with 11 miles on the clock. Five days later it’s already slightly overdue its first service. Here’s what we learned so far:

Even during the first 200 miles, keeping to a 6000rpm limit, the GSX has enough poke to out-accelerate other traffic and cruise at motorway speeds in top. 750cc is that magic capacity where there’s enough low-down power for lazy short-shifting, but fast enough pick-up when you crack the throttle open to get a move on too. Four teeny pistons will always spin up faster than two or three larger ones, so it feels buzzier and thrashier (is that a word?) than a twin or a triple.

With more miles we’ve added a few more revs and are starting to see what the Suzuki will do. Hang onto the lower gears for longer and be brave enough to use more of the throttle and it’s obvious there’s some serious speed in this bike. The spec-sheet numbers might not impress the sporting Billies on the litre-plus megabikes, but on this (experienced) rider’s ‘wide-eyed-ometer’ the GSX feels more-than fast enough when you stretch the cable (wire?).

Once the first service is done and we can really open it up I’m really looking forward to finding out how fast I can go for £7650.

Suzuki know how to make a bike easy. Their clutches are always light, throttle actions too. Gears select smoothly, brakes are progressive, but powerful, switchgear is where you expect to find it and clocks are easy to read. It sounds simple, but you’d be surprised how many manufacturers get this stuff wrong. And it matters because every split-second not thinking about what you are doing and where you are looking is a moment that slows you down or robs concentration. Good ergonomics are the unsung heroes of safer, sporty riding and generally, the Japanese do it better than anyone. I still remember how Triumph’s first generation Street Triple was a brilliant bike spoiled by a clumsy right hand footrest that didn’t let me control the back brake how I wanted to and it annoyed the heck out of me. This stuff matters and the GSX has got it spot-on.

The riding position is sporty, but upright. Footrests have been raised from the previous GSR750 for added ground clearance, making the GSX more focused, but still just about comfy enough over distance.

The wide handlebars make it easier to flick the bike aggressively into a corner, but they also allow lazier, easier steering when you’re more gentle with your input. The steering feels sharp and accurate, but not at the expense of stability. So far our enthusiastic running-in on bumpy, rural backroads hasn’t provoked any wobbles or tankslappers – not even a tanktickle. Hopefully that’ll continue when we start to get a bit friskier with the volume control.

4. It’ll make a great commuter too*

All that stuff above about the smooth engine, light clutch and easy controls make the Suzuki brilliant in traffic. It glides through the smallest of gaps and little things like the mirrors being tall enough to clear those of most cars mean you can be optimistic about your hole-hunting and make it through most (ahem) of the time unscathed. The traction control comes in early on setting ‘One’ but it doesn’t feel intrusive and I left it in that mode for much of the time. The ABS is effective, but, again, not overly intrusive, and, in gentle, town riding, the GSX was giving 64mpg, which is about 200 miles from the 16 litre tank. Even in half-thrashed, running-in mode I was still getting 54mpg.

*There is a ‘but’. If it’s been a while since you rode an unfaired bike be prepared to be surprised how much colder and wetter you will be. Even in mid-April, wearing my full winter clobber I was cold enough to need a break after 50 miles. Hands, arms and neck were all getting chilly, heated grips would (will) make a huge difference. 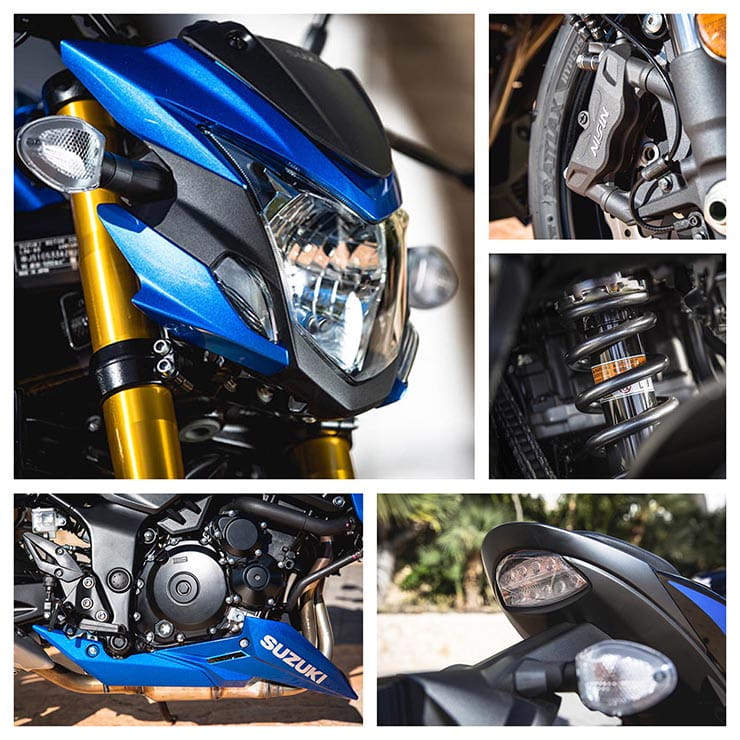 Suzuki’s marketing describes the GSX as an ‘Apex Predator’, whatever that is. Presumably they are saying that the GSX handles, which it does…very well…sort of. But, as we were saying earlier, just as you can count on Japanese manufacturers to get the ergonomics so right, you can equally count on them (Honda aside) to save a few quid by fitting rear suspension that isn’t quite up to the job. Cornering hard on a GSX has the back-end bumping and bouncing out of line right at the moment when you need to focus, like the rear shock has the wrong spring rate or damping setting (or both). It’s annoying, not dangerous, but it should be better. Yamaha’s original MT-09 was the same (since fixed for the 2017 model), and plenty of Kawasakis too. Once run-in we’ll spend some time playing with set-up to see if we can tune it out. If not, we’ll make it part of the long-term plan to see if we can improve matters within a sensible budget.

And budget is important because the GSX-S-750 has some tough competition at similar prices. Triumph’s new Street Triple S and Yamaha’s revamped MT-09 are too close to the Suzuki’s £7650 price for comfort and Honda’s already-great-but-revamped-for-2017 CB650F is a whopping £1000 cheaper.

Get the first service done, put the bike on the dyno, look into alternatives to the ‘not-too-pretty’ standard exhaust, add some heated grips and play with suspension set-up to look for smoother cornering performance. 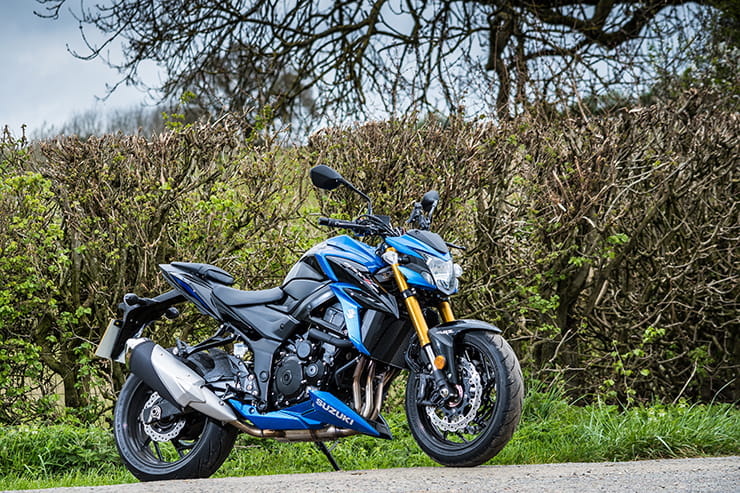