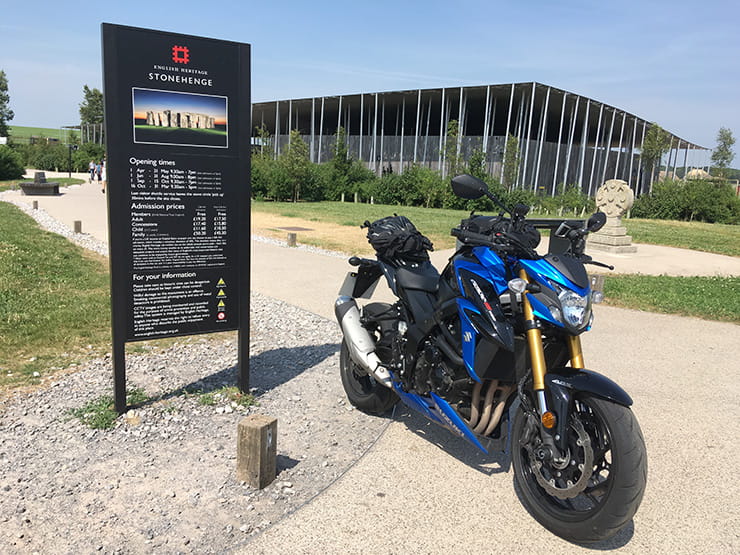 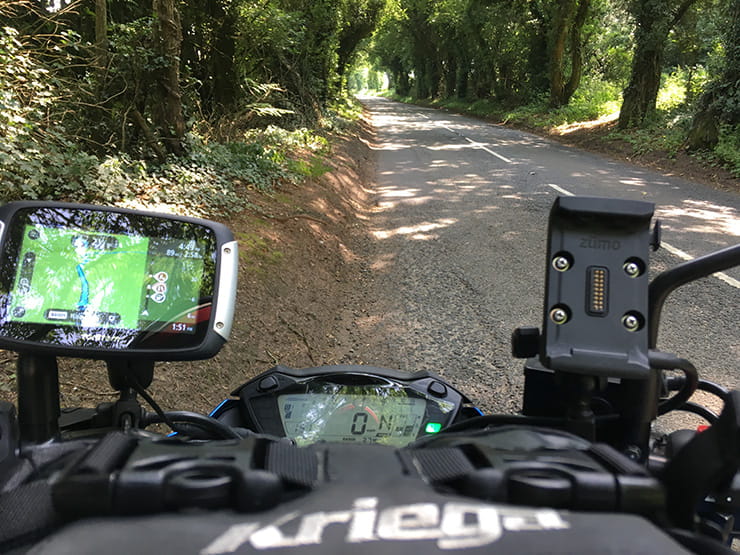 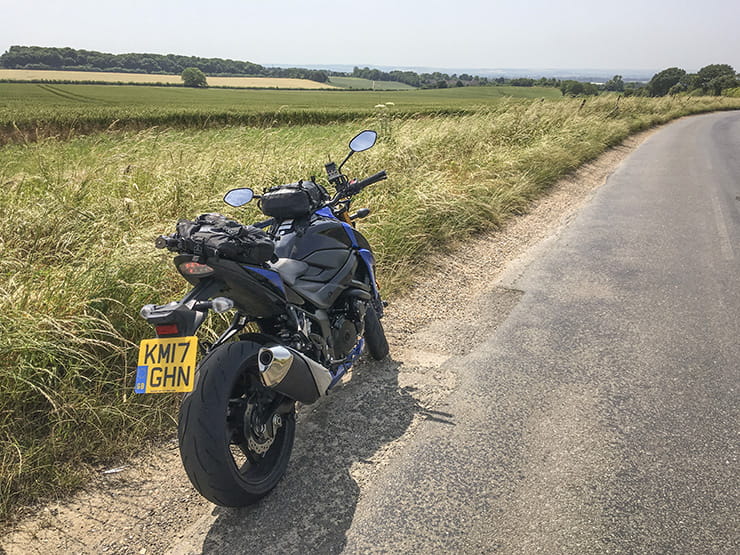 I’ve got a sensitive bum. On bike launches, I seem to be the first one moaning about achy cheeks, and my general commute, along with some two-hour rides, made me wonder how much I’d really enjoy a few hours in the Suzuki GSX-S750’s saddle on the longest day of the year. In fact, I even put my sheepskin cover on the seat the night before. I took it off: it looked ridiculous.

As I write this, I’m sat in a Premier Inn, eight hours after leaving home. I stopped to take a few pictures, to fill up once (after 138miles, with the surprisingly accurate range display on the dash saying I had 26 miles left), for lunch, and to buy a fridge magnet for my daughter at Stonehenge. And I don’t ache. I reckon I was riding for six and a half hours, though granted, I only covered 221.5miles. That’s a paltry average speed of just 34mph. I usually reckon on averaging 60mph. 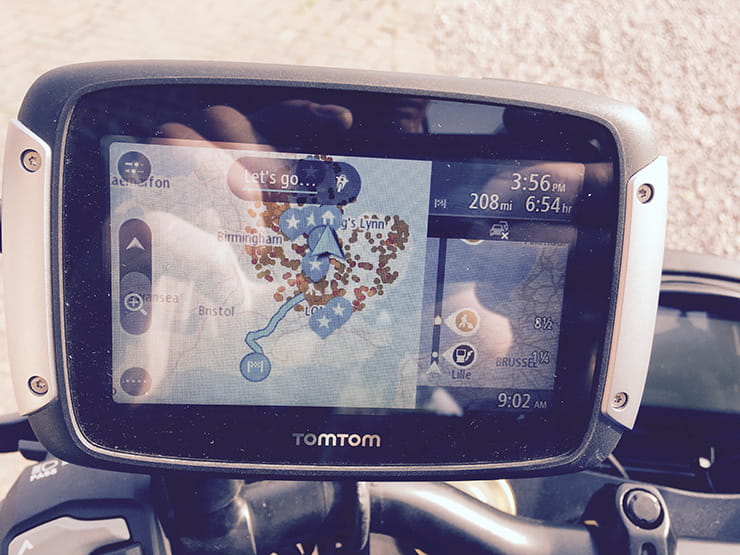 I set the TomTom to plot a winding and hilly route, turning a 175mile, three-hour journey into 220miles and six and a half hours.

With two business meetings on the south coast, both booked for the day after the summer solstice, I figured I’d use the longest day to really get to know my long-term-test Suzuki GSX-S750. The boss, Steve, said that we should both do some kind of big ride – he’d go north, while I head down. The conversation started with “You go via Stonehenge. I’ll get up at dawn and see how far I can get. I should do 1000miles.” Good luck to you Steve, I thought; I hate early starts, and I’ve never been bothered about setting records when it comes to distance. Don’t get me wrong – I love riding a long way, just in my own time. The greatest distance I’ve covered in a day is only Inverness to Peterborough, via some scenic stops and fun back roads. That was just over 500 miles, and I would have stopped off, but I wanted to get back home to see my family. The longest ride I’ve had is Peterborough to Spain, but I took my time then, stopping twice in France as I navigated all the back roads – no motorways thank you.

I like to enjoy the scenery; to explore the surroundings. I like to be able to stop, turn around, and go back for that stunning view or interesting sign. I string these points of interest together with as many fast, sweeping roads as I can, but I’d rather be going as fast as I can on a ‘B’ road, than on the major routes that let you get that average of 60mph-plus. 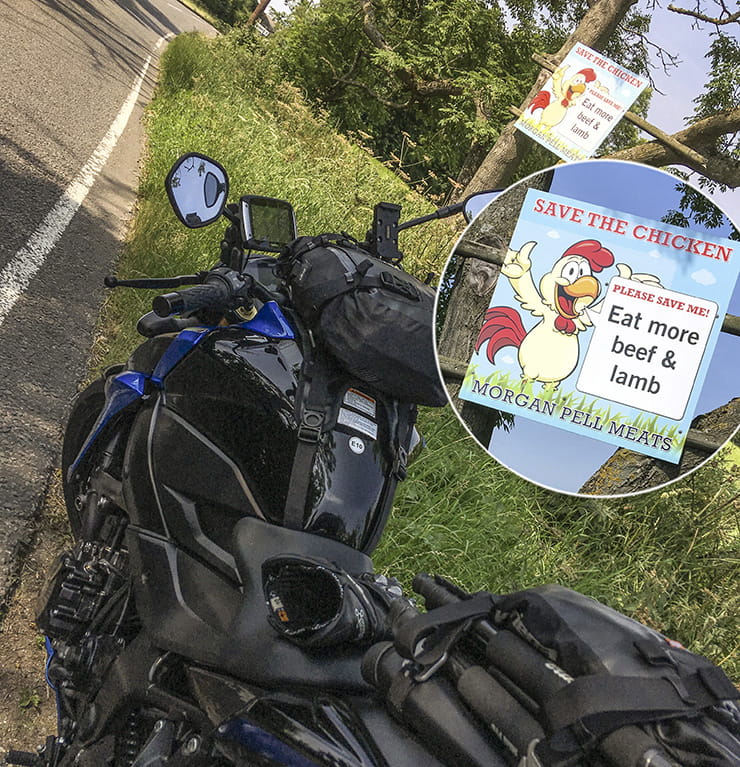 Spotted on the way to Bedford…

And I like to be on my own, not having to ask anyone else if they mind if I turn back for a photo, or stop for a drink, or nip off for a wee. I can stop to stretch my legs whenever I want, but I didn’t need to on the GSX-S. I’m not suffering now, and besides needing to stand up on the pegs a handful of times to give my posterior a bit of a break, I just kept going. My wrists certainly didn’t ache, though my neck did over the last half an hour. But that’s more to do with the camera, waterproofs (can’t be too careful, even when the Met Office says it’s going to be 30°C), computer, chargers and more in my rucksack.

While it’s far comfier than I thought it’d be, the seat isn’t perfect. When tucking down low on the bike, and shuffling my weight back as far as I can, the rear of the pad has a slight lip, which is a little uncomfortable. I like to get the back of my bum against the pillion hump, but I can’t quite do it on the 750, my bottom feeling like it’s dropping off the back of the seat. Still, slight niggles aside, I’m really impressed with how the Suzuki feels after a full day’s riding. 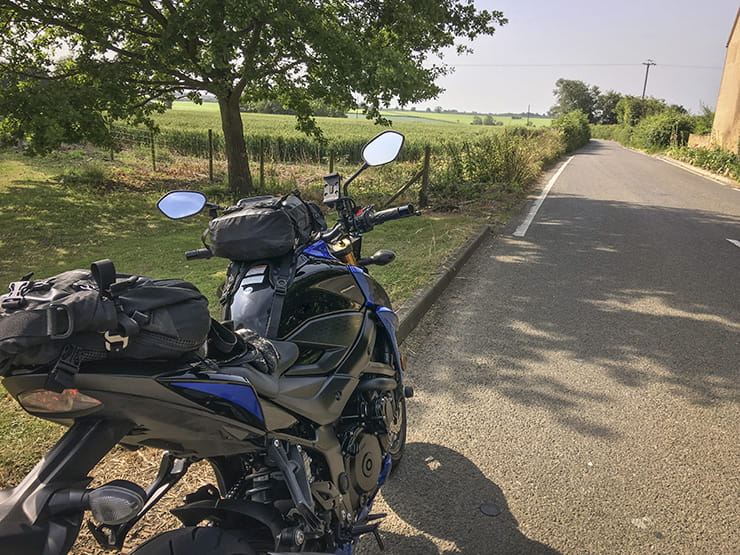 I tend to over-pack, but for this journey I only needed some evening clothes and a change for the next day. But by the time I’d factored in a decent-sized security chain, some bottles of water, and all my work kit, I needed more than my Kriega R30 rucksack. Grabbing some panniers, I soon realised it wasn’t going to be so easy – the aggressively-styled tail unit, and only two buggy points behind the pillion pegs meant I couldn’t find a way of mounting throw-overs without the risk of them folding in under the tail and fouling the wheel. A Ventura pack would be a good solution for this bike, being a simple rack that securely carries a good-sized bag on the rear, but there’s not one available for this new machine yet. The answer was a Kriega US10 Drypack attached to the tank, and a US20 strapped to the tail. The larger pack took the chain, but had plenty of space left… I’m confident that I could pack enough on this bike in this way to go away for a week (and that decent sized under-seat space is ample for a hefty disc-lock and plenty more, just not quite enough for a meaty chain). 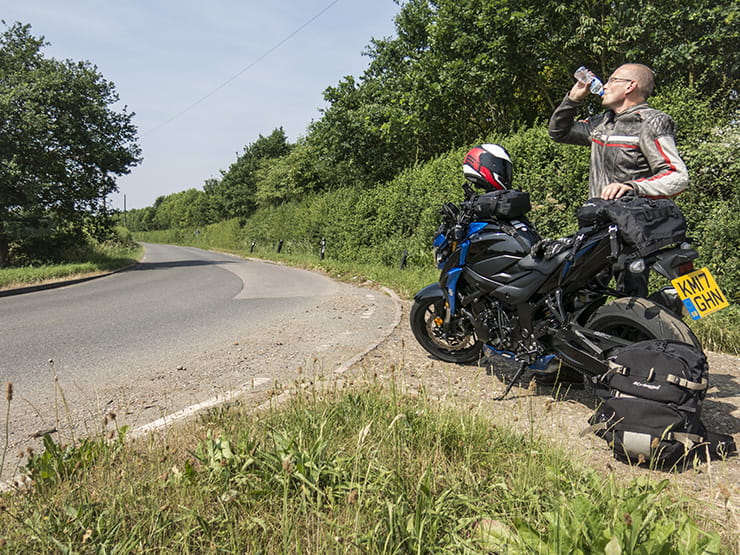 I’ve said it before, but the 750’s engine sounds fantastic – that note as you grab a handful and let the engine really work is everything a sports bike should sound like, even with Euro 4 shenanigans. Making a claimed 113bhp, on paper it might seem lacking these days, because of course, everyone needs 200bhp. Except me, it seems. My own KTM 1050 Adventure makes 99bhp at the rear wheel, and while that twin’s got more low-down thrust than the Suzuki, this four-cylinder motor fuels extremely cleanly, pulling strong from very low in the revs. No flats-spots, no woolly bottom-end, just linear power all the way.

While the ‘Easy Start’ feature may seem a novelty – touch the button and the engine will turn over until it fires – I have found myself missing it when I ride other bikes. It’s not that my life is so hectic that I can’t spare the extra 750 milliseconds of holding the button down, but it is satisfying to tap it then forget about it. The ‘Low RPM Assist’ function is here too, designed to prevent the bike stalling at low revs. You can sense it at the traffic lights: if you relax the cable-operated clutch a little, the revs build ever-so-slightly. I still stalled the bike pulling away from my lunch stop though.

After about five hours, I was a little more aware of holding the non-span-adjustable clutch lever back – it’s not heavy, but it’s not slip-assist, hydraulic light. On the other side of the bars, the front brake lever gives no cause for comment in that I’ve never felt panicked, even barrelling too fast into a few corners, but I’ve also not felt the need to get overly excited about the stoppers. They’re more than powerful enough, but not sharp. Combined with the budget clutch lever, the old-school rubber brake lines just seem a little low-rent. But I forgive them every time I hear that traditional GSX-R sound…

Being relatively low (with an 820mm seat), and weighing 213kg, at 5’10” I find it very easy to move the bike about. That’s great when I see something I want to go back for, and it’s also proved extremely useful manoeuvring through city traffic; you don’t need much of a gap to slot the Suzuki through.

My daily commute had made me question the suspension, but today’s trip left me much more complimentary. It might be adjustable for preload only, but the front always feels settled and direct, while the rear is great 90% of the time. The other 10%, it can get choppy over continuously bumpy ground. Of course, I’m used to the plush long travel of my adventure bike, but some adjustment here might have been handy, and at 13 stone, I’m not pushing the springs all that hard. Let’s see what tomorrow brings... 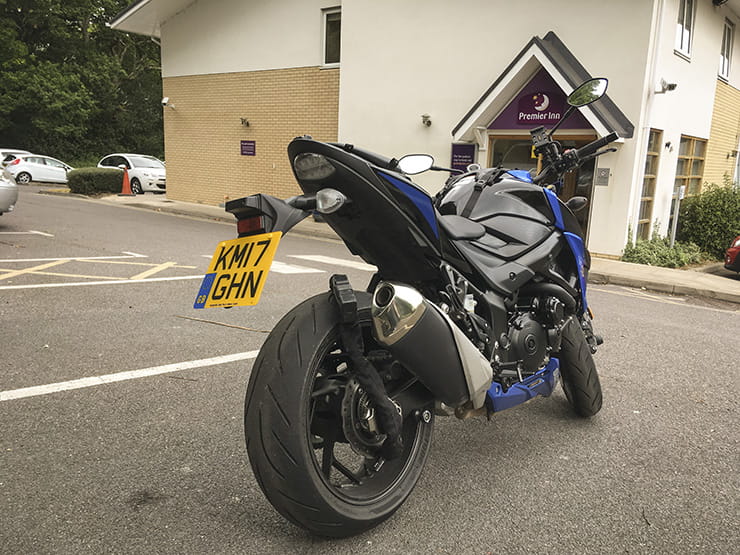 Suzuki GSX-S750 – The day after the day before

Meetings over, it was half five and I wanted to get home, so it was to be ‘fastest route’ on the sat-nav. With 140miles to go, I was looking for that 60mph average… rush hour M25 traffic put paid to that, so filtering knocked it down to an average of 54mph.

A total of 191 miles on day two were covered much more quickly, but I wasn’t quite as comfortable as I was on the ride down; sitting in the same position on the major roads put a little more pressure on my delicate behind, and sustained high speed started to cause my neck to ache a bit.

But that was all to be expected of a naked street bike, and ultimately the Suzuki GSX-S750 was a joy on every road. I might not have covered the 1000 miles Steve was aiming for (though it turns out, nor did he), but my route took in a real mix of fast sweeping roads, city centres, single-lane tracks and motorway. My overall average economy over 412.5miles was 48.3mpg (the second day gave me the best of course, at 51.7mpg).

I didn't focus on speed to cover the distance, but riding on the year’s longest day gave me the chance to really appreciate everything the Suzuki can do; it might not be the all-rounder that my KTM is, but it's the first machine in two years to really make me smile as much… 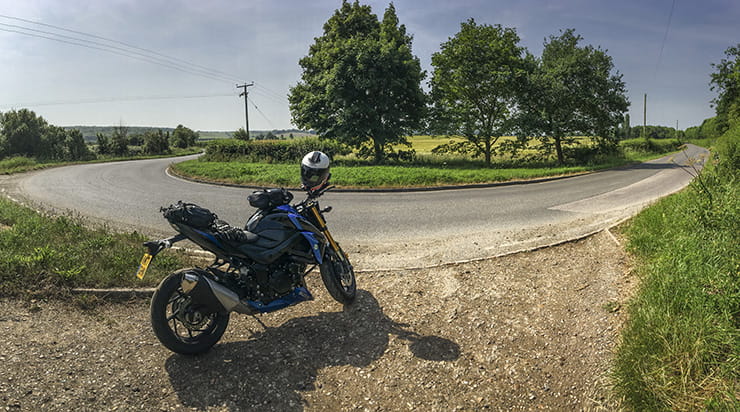