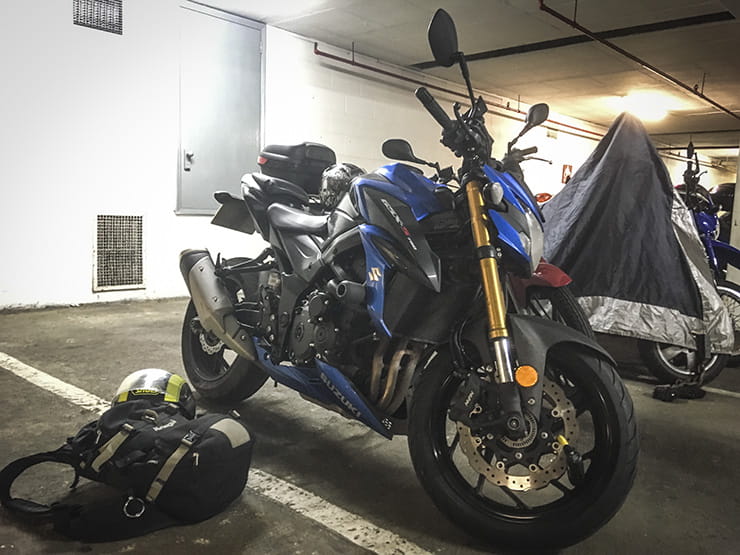 “It’s got some go that, hasn’t it?” When it’s BikeSocial’s Michael Mann saying it – someone far from sluggish – and he’s riding a 2017 Honda Fireblade, you know the Suzuki GSX-S750’s ‘paltry’ 113bhp really is more than adequate.

We’d just been thrashing home from a meeting, taking the back roads. I knew the way, so was just in front. We turned left, both gunned it, and the 189bhp Honda didn’t come past. Well, not until speeds that saw me seriously considering my licence and backing off. Of course the ’Blade is more powerful than the Suzuki. It’s faster too. But only when you start getting to really silly speeds.

It’s been my gripe with big sportsbikes for years – they’re just not that much fun until they’re cracking 100mph+, and on the road, that’s soon going to end in tears. The Suzuki has a free-revving motor that sounds like the GSX-Rs of old, and wills you to wring its neck. It’s quick, but it’s not stupid-quick.

That performance is also making more sense as winter takes hold. While Michael’s Fireblade got relegated to the garage, the GSX-S isn’t worrying me on the increasingly greasy roads. Unlike far too many Euro 4 bikes, there’s no lag to the fuel injection, and no sharp uptake. It’s progressive, it’ll fire past traffic as quick as you like, but it doesn’t feel like I’m riding a knife-edge of grip. 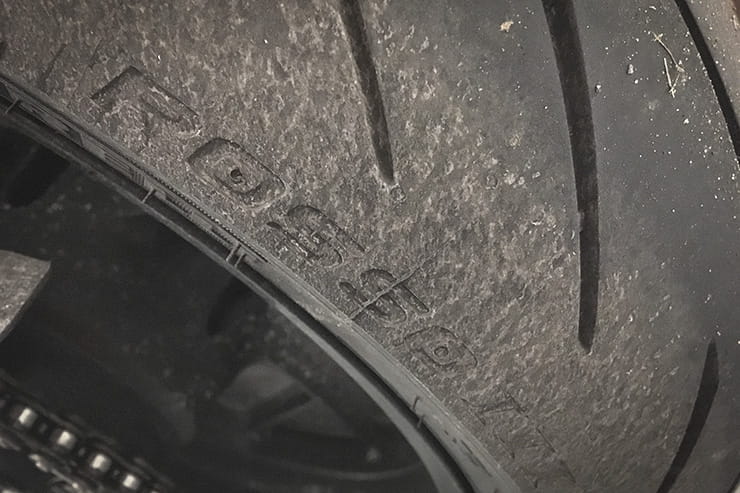 The Evotech crash protection gives me a bit more confidence on the more dodgy surfaces, but I’m not lulled into any false sense of security. The Bridgestone S21s that came with the bike gave me no issues, but they were close to their wear indicators at 3685miles. Now, with nearly 6000 miles showing on the dash, the Pirelli Rosso IIIs I replaced the OE rubber with have proven utterly dependable. Their first outing was on track, where they gave more grip than I knew what to do with, and haven’t given me any hairy moments, even on the cold, wet January roads. I’m not riding anywhere near the speeds I was in the summer, but I’m still getting far more use out this bike than I would on something more aggressive. 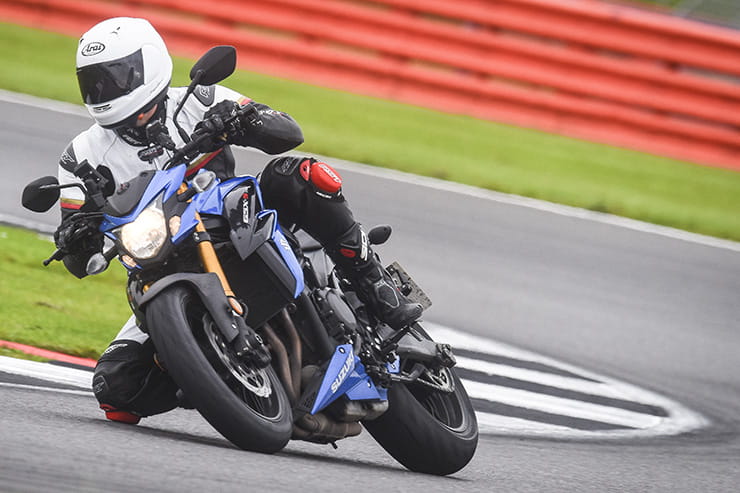 On track, the Suzuki is a great bike, with more than enough performance for most normal riders.

Okay, the fact that it’s not fully-faired means it’s more open to the elements, but I’ve given the Suzuki a good coating of XCP Corrosion Protectant, and try to keep it as clean as I can. My next update will look closely at how the machine has faired through the salt, but the signs are encouraging.

I could go winter-mad and fit some heated grips, but my Keis heated jacket is there when things get too cold for the Rukka. I have started to wish I’d put them on though – 150 miles in January really numbs the fingers… 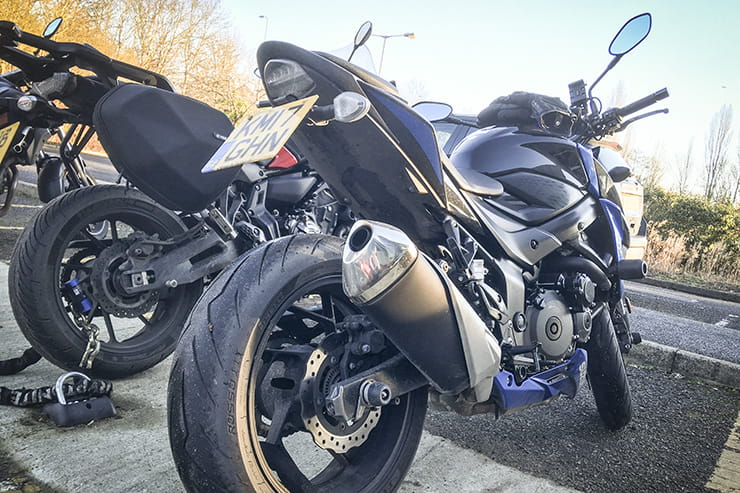 The tail tidy looks so much better than the original, but I am noticing a bit more spray on my rucksack and the pillion seat in this bad weather. When installing the tidy I didn’t refit the Ventura luggage, simply because I haven’t had any big trips since then that needed the space over my rucksack and the Suzuki tank bag – it’ll be going back on soon. 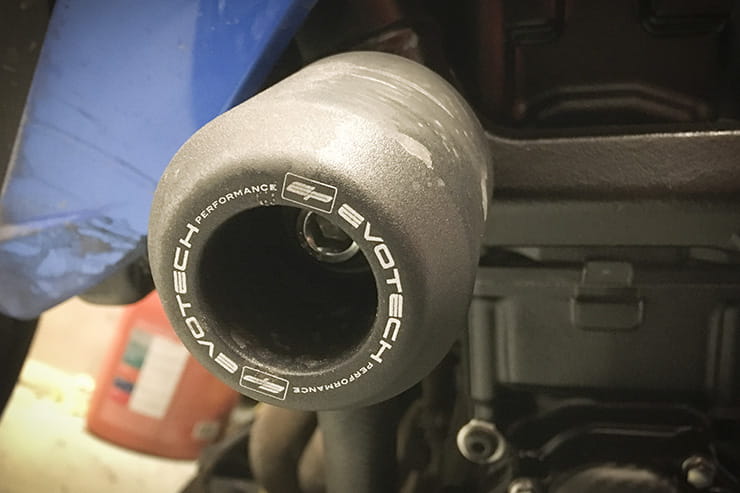 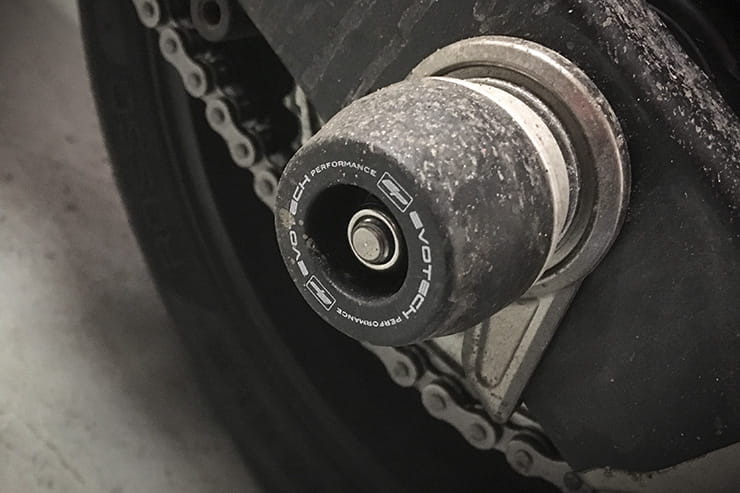 GSX and the city

Being low and not too heavy, the Suzuki is easy to weave through city traffic – on two recent winter rides down to New Scotland Yard, I was glad to be on this, and not my more unwieldy KTM 1050 Adventure.

But it’s not all rosy – compared to the Austrian machine’s hydraulically-actuated slip-assist clutch, the cable-operated unit on the GSX-S750 is heavy and unrefined. To be fair, it’s only noticeable when you’re spending an hour picking your way through traffic, but when you’re used to the luxury of a lightweight slipper unit, you’re aware of this aged design.

You can feel some vibes through the heel guards, but they’re not distracting, and I can forgive anything that sounds this good.

I’ve said before that the one-touch start is quite satisfying – quickly flick the button and the bike turns over and fires without you needing to hold it. Okay, that saved fraction of a second might seem irrelevant, and on the spec sheet, you wonder who’d care, but use it and you’ll miss it when on another bike.

Also of dubious value on paper is the ‘anti-stall’ feature, which promises to increase revs and prevent stalling when pulling away. Think about it though, and its appeal in city riding becomes obvious.

Sadly, it doesn’t seem to work. Now, I know how to pull away, but we’ve all had that moment when, with cold hands on a wet road, you don’t give it quite enough, and you’re left with the cars on either side of you closing up that gap you were aiming for on the roundabout. The fact that I expected the Suzuki to help me out made the two times it happened all the more frustrating. Still, once fired up again, and as I scream past the cars that tried to take pole position, I once again forgive the GSX-S because it sounds so damned good. 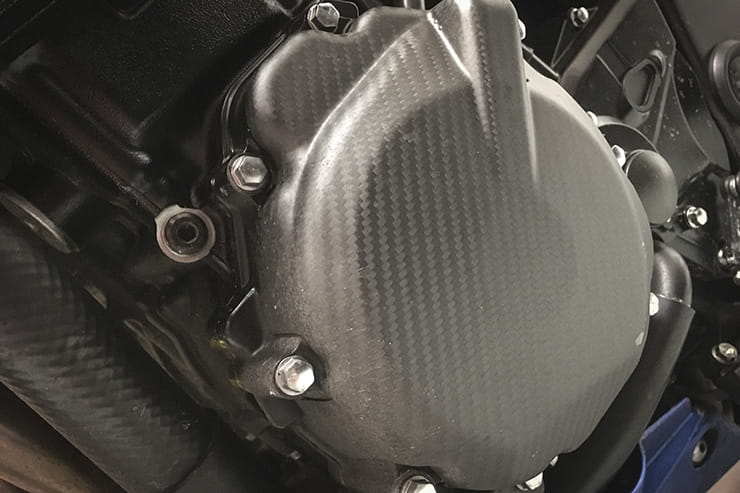 I know that this loan bike will have to go back to Suzuki soon, but I’ve really grown very, very attached to it. As an all-rounder for my needs, the only thing its lacking is large hard-luggage capacity and plenty of space for a pillion – something an adventure bike does so well. I also find that the rear is a bit choppy over poor tarmac on fast back roads, but it’s a niggle that raises its head infrequently.

If you’re happy with soft luggage, the Ventura kit works a treat. If you’re riding mainly without a partner, there’s nothing to complain about. If you want to modify it, the Evotech tail tidy and stunning Suzuki carbon-fibre parts are a great place to start. And among today’s prices, it’s not too eye-watering. In fact, you can pick up a pre-registered one for just £6,995…