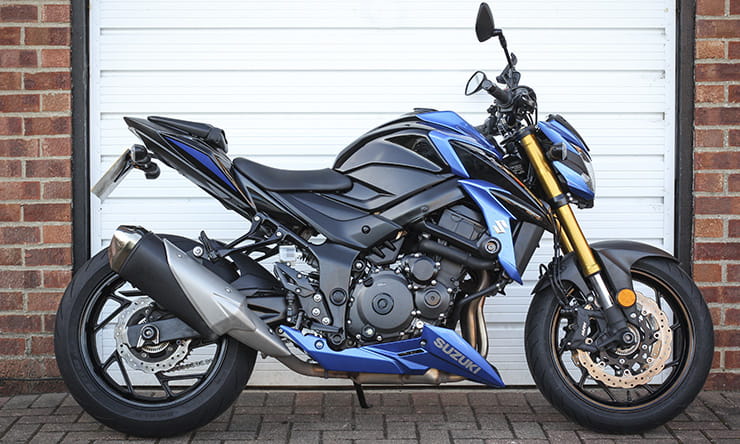 We all hope we never use it of course, but crash protection on a motorcycle can potentially save you a fortune in damaged panels and fork bottoms; when buying a bike, always check the lower ends of the fork legs – they’re easily scuffed in a drop but very expensive to replace (also look out for someone chamfering the opposite leg to match the damaged one!). The same goes for the swingarm, not to mention of course the engine cases; if you chuck your bike down the road with any speed, there’s a real chance of these getting holed. Then the oil’s gone and your engine seizes, or fills up with gravel.

So crash protection is a worthwhile investment, and though some people still talk of the idea of your bike potentially receiving more damage due to the stresses put on fixing points during a crash, I believe the benefits outweigh the risks. The leading crash protection manufacturers design their kit carefully, and while it’s impossible to know what each crash could involve, it’s a reasonable assumption that in most spills, some quality protection could save you a lot of money.

If your bike slides into a brick wall at 60mph, there’s little that’ll save it. Equally, if your machine does bounce along a curb, tearing your crash bobbin out of its mounting, that same, unprotected crash would likely have had a serious impact on your alternator or clutch cover anyway.

I’ve always fitted crash bungs, and as my long-term test Suzuki GSX-S750 is being used on road and track, as well as through the coming winter, I want to make sure it looks as good when I give it back as it did when received it.

In the last instalment I bolted on several of Suzuki’s own carbon-fibre and luggage accessories – read about them here – but this time I’m looking at accessories from Evotech Performance. Making almost all of its accessories in its Lincolnshire factory, the company came to life after one of the directors – designer and engineer Chris Vines – created a tail tidy for his own bike while he and Dan Rack were making parts for worldwide industry at their company, Drury Precision, which shares much of the tooling now used to manufacture bike parts. 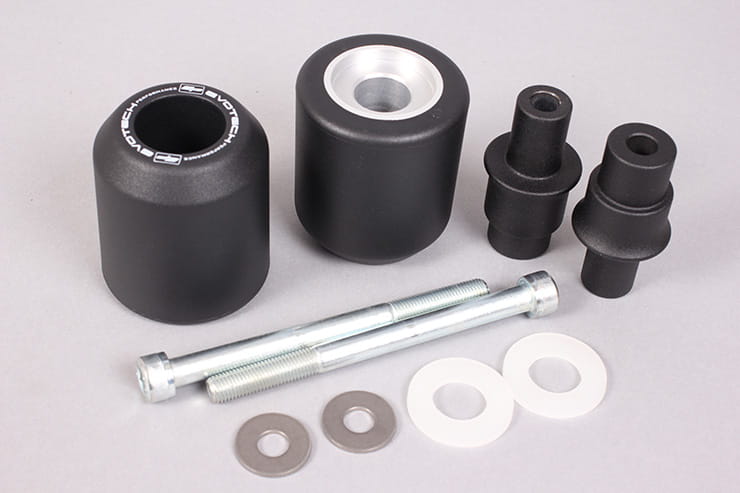 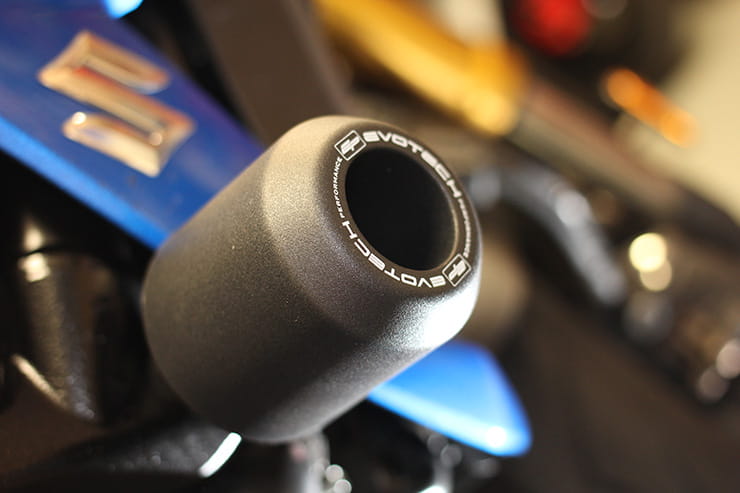 These are extremely easy to fit – use a hex key to remove the two original bolts, and the same one to fit the new bolts, which carry these two-part crash protectors. They’re very well made, with a tough plastic main section and aluminium inserts. Evotech Performance does all its own powder-coating in house, so the black spacers used with these sliders are the same finish as all the other parts to come out of the Alford workshop.

The sliders are mounted well forward on the bike, so there’s no chance of them fouling your legs or knees, and I was impressed that the instructions, which are only available online, include the torque setting – 70Nm. This is important on engine mounts, and I’d suggest that if you don’t have a torque-wrench, you borrow/hire one, or ask your dealer to fit these. 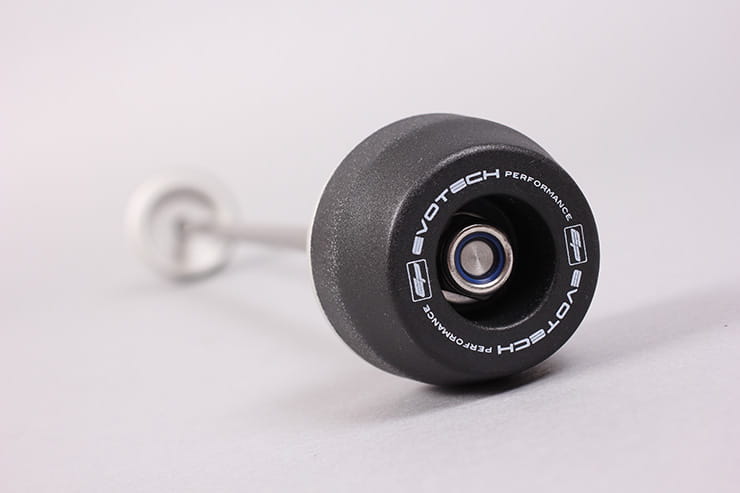 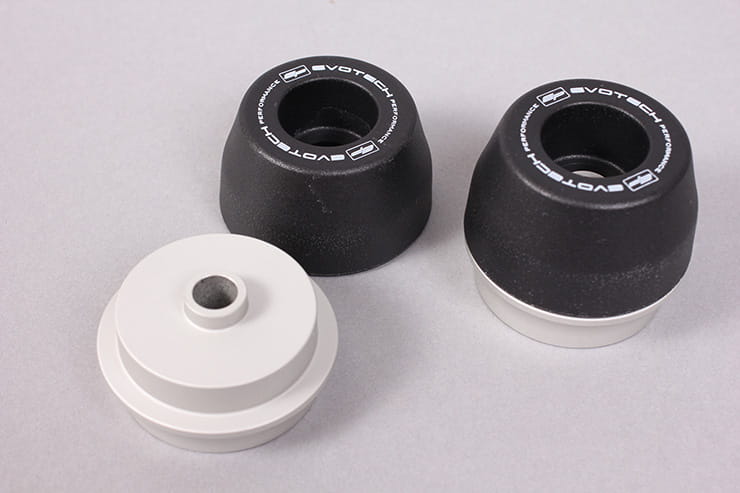 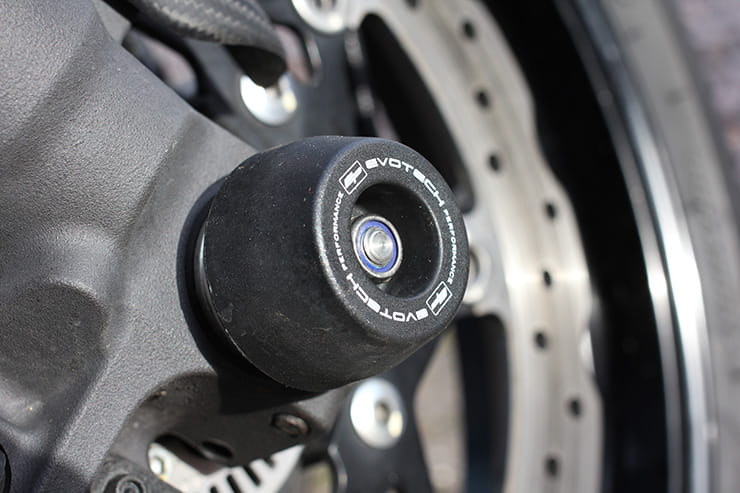 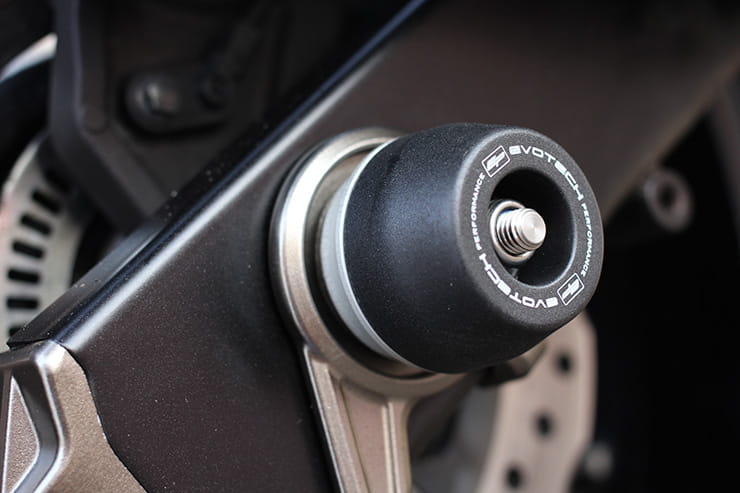 Again, these are very quick and easy to install – you just need to make sure you have two 13mm sockets to tighten the nyloc nuts at either end of the threaded rods, which pass through the front and rear axles.

Tough plastic sliders sit on machined aluminium bases, and while the rear axle’s rod could be a little shorter, it sits flush with the end of the slider, not poking out past it. 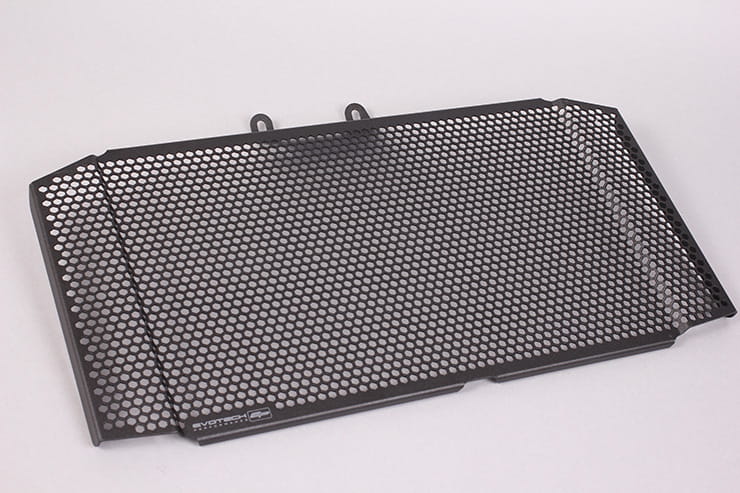 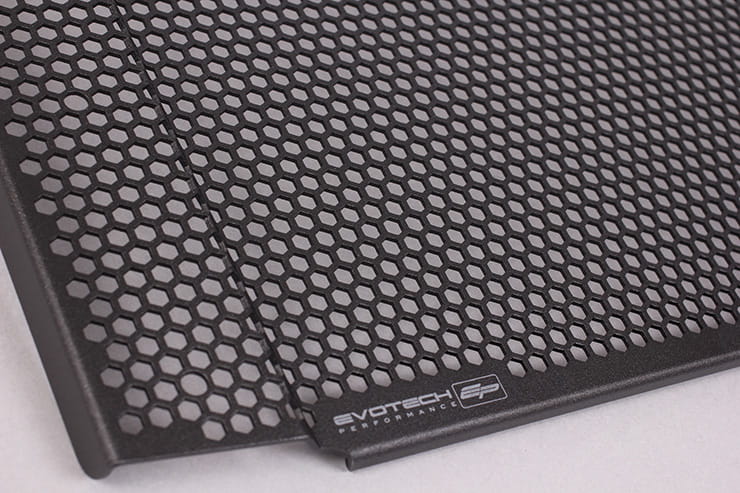 Beautifully made, and finished with Evotech Performance’s trademark matt-black powder coating, this rad guard is laser cut from aluminium and fits perfectly.

To install, you only need to take the clip and screw from the inside of the two front inner faring panels to have enough flex to slide the guard up and bolt it into place – I was relieved to not have to strip the Suzuki’s panels off as they have a lot of small, brittle clips inside. 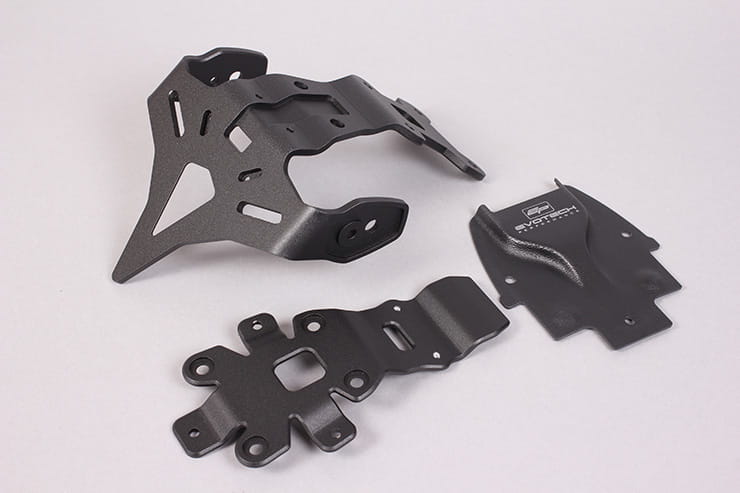 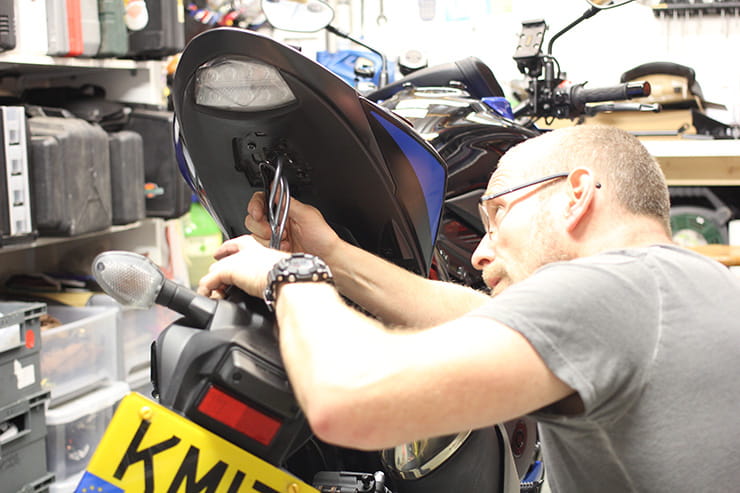 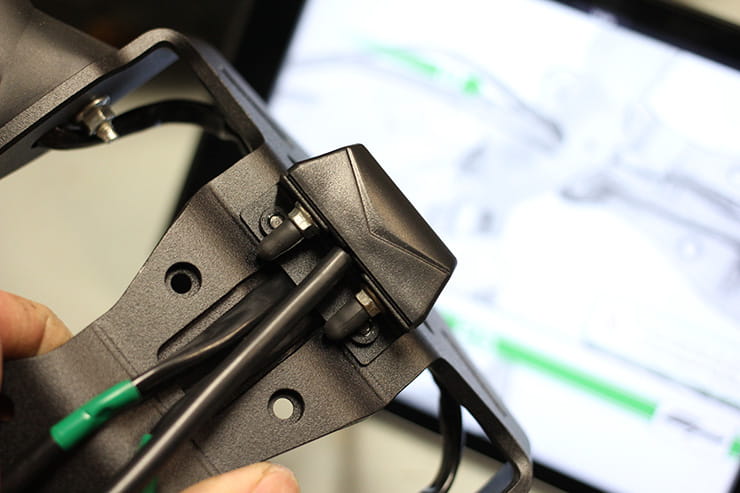 Of course, this doesn’t offer any protection, but eliminating the original number plate and indicator hanger makes a huge difference to the look of the GSX-S. Homologation rules state that all motorcycles must have their number plate behind the rear wheel, which is why you’ll often see those plastic monstrosities dangling behind an elegant tail section. Fortunately, most manufacturers make it very easy to take them off, though bear in mind that if we end up with an MoT ruling system like that of Spain (don’t for a minute think that Brexit will make us immune to European standards), it’ll be just as important that you can easily put the bike back to original. 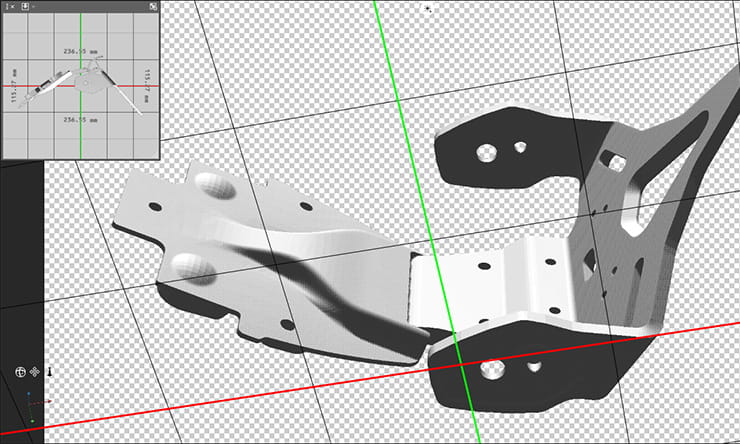 I’m particularly impressed with the fact that there’s a loom adaptor included with this kit, so there’s no need to cut your original wiring for the new LED number plate light. Evotech Performance has limited its overall range by insisting that you don’t need to modify your bike to use its kit, but it can make life easier if your machine’s in the range.

While all parts have a QR code to scan, which gives you access to an online PDF instruction manual, it was when fitting this tail tidy that I really missed a paper-based guide – I just think it makes life that little bit easier, and personally I’d be willing to pay an extra couple of quid to have one.

Despite using my phone to read the instructions while fitting in my garage, it was still a relatively simple job, and the finish is wonderful. The unit is machined from aluminium, with perfect recesses for the OE indicators, and even neat little channels for the zip ties that hold the wiring in place.

The whole tidy fits perfectly into the GSX-S750’s tail, and has a very neat plastic cover that finishes it off a treat, even though you have to get on your knees to see it; a very nice detail. It’s worth noting that if you don’t fit the cover, you should still be able to use a Ventura luggage rack, as the fixing points are still there. 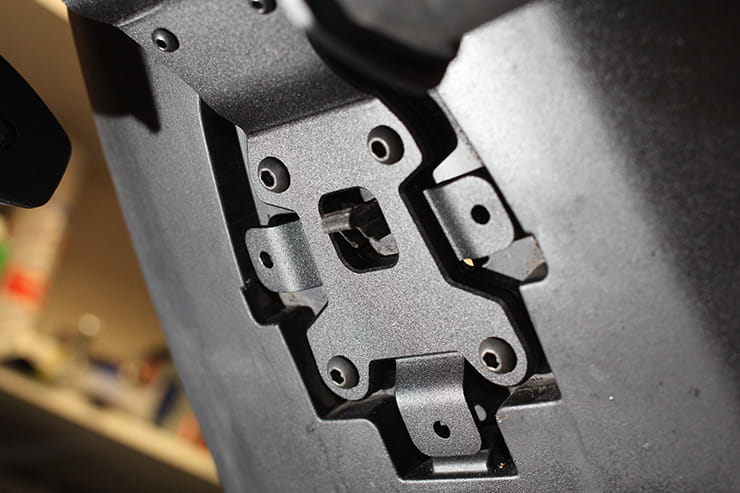 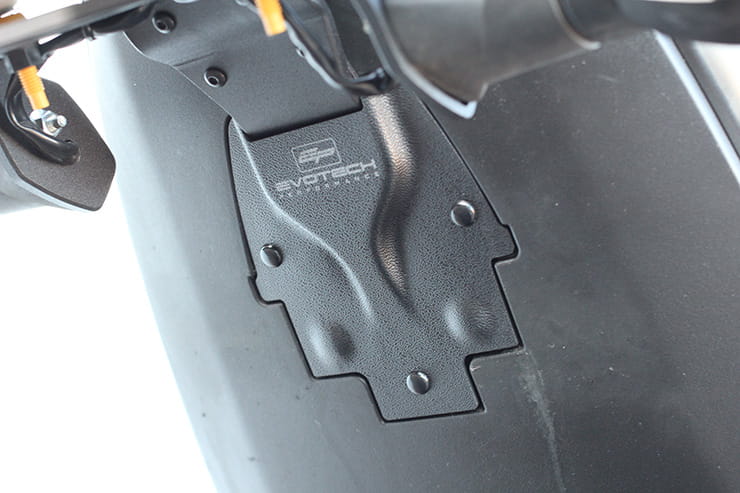 The plastic cover hides the fixings for a factory finish

There are also two adaptor plates that let you use your number plate without re-drilling it by creating adjustable mounting holes. The only problem with going down this route is that there’s a little more flex in the plate, and the lamp doesn’t illuminate it as effectively, due to it being pushed out by about 5mm.

It’s a shame that, like other tail tidies, you can see the ends of the indicator fixing bolts if you stand at the right angle, but this Suzuki’s are far more subtle than many others. I might consider some heat-shrink tubing over them, to disguise that shiny silver thread and nut. 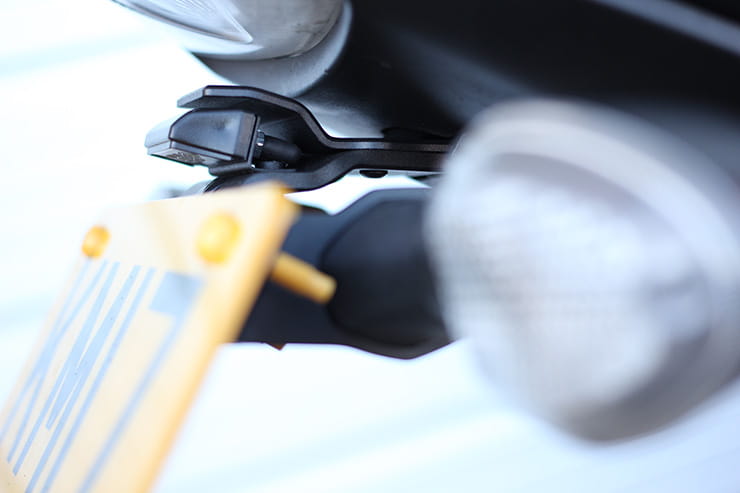 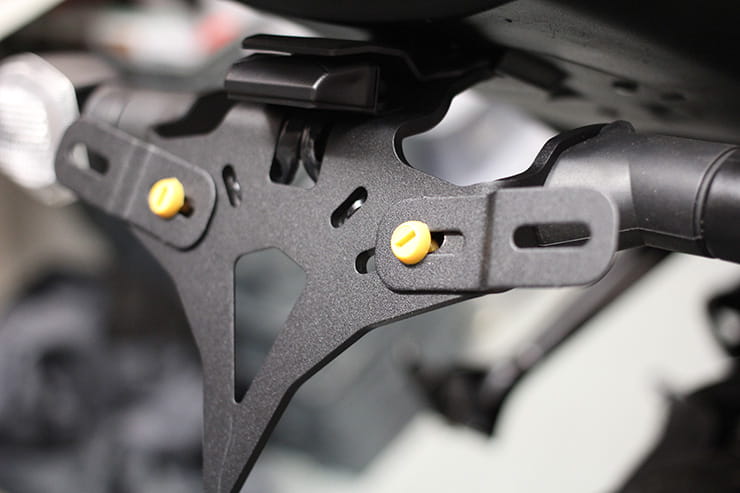 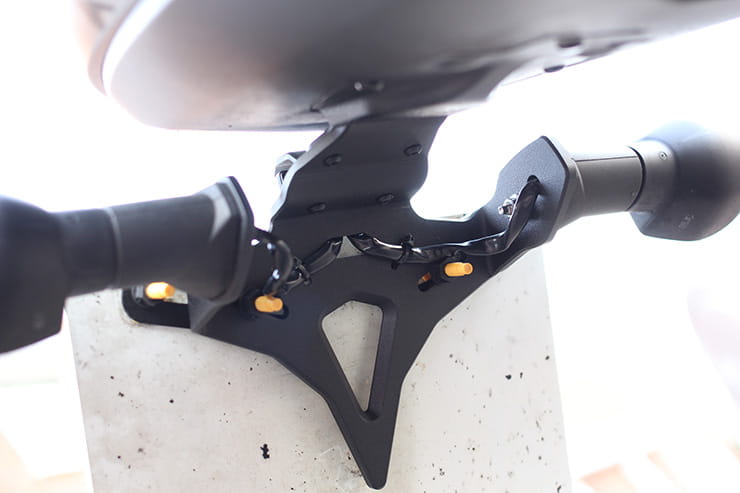 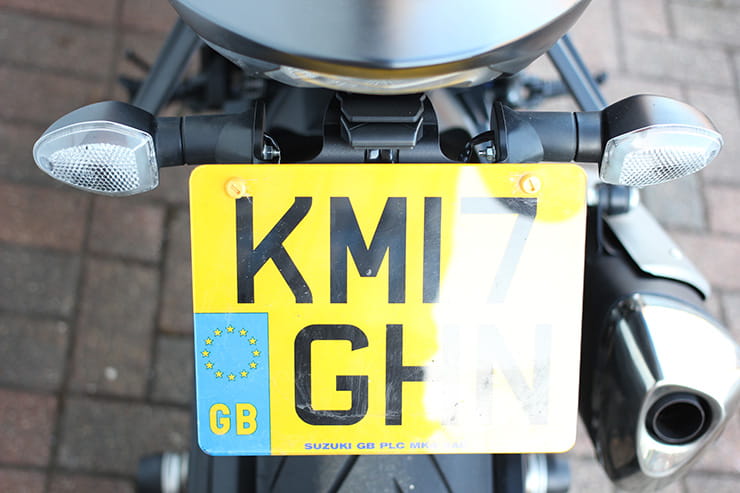 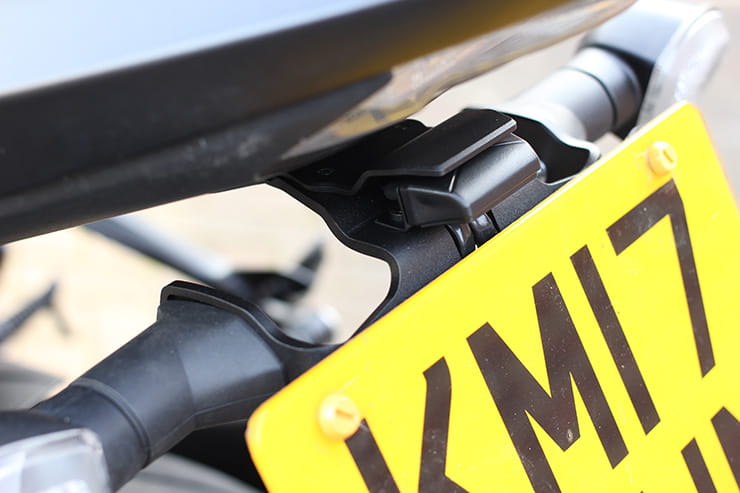 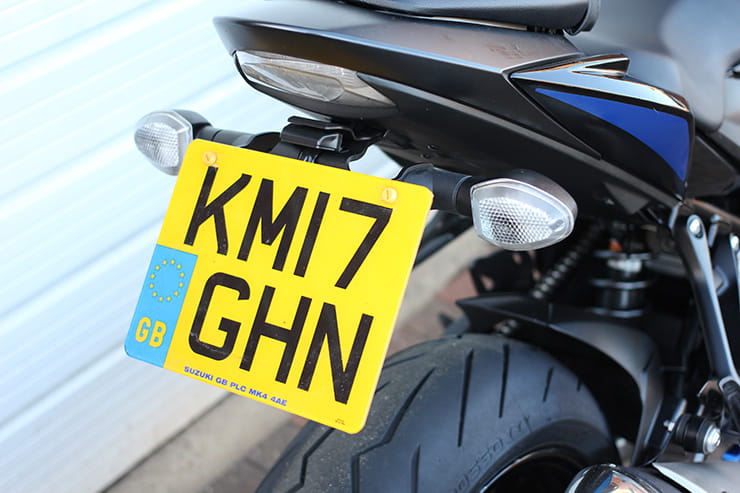 The crash protection is, I think, a valuable addition to this and any bike. Like the well-crafted tail tidy, it’s also a great way to add your own touch to a standard motorcycle. I don’t think any of the parts look out of place, and as the finish matches across them all, they tie together nicely. The total value of the accessories is £308.95, but for the standard of finish it’s well worth it, and the bike looks even better…