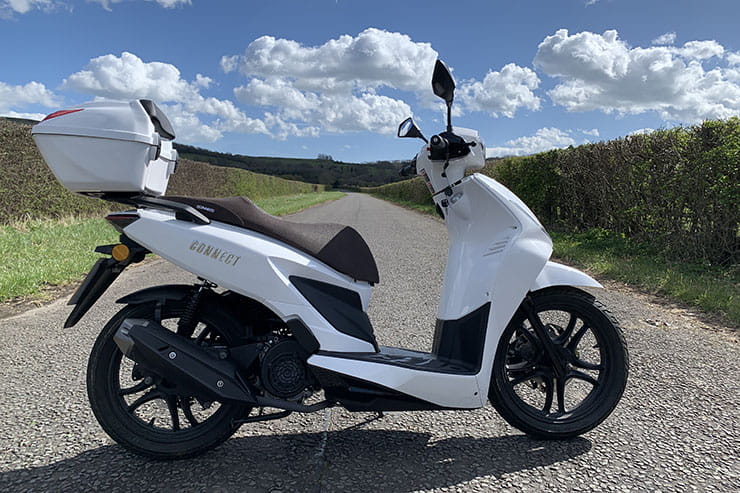 Verdict: The 2022 Sinnis Connect blends up-to-date styling with an old-school air-cooled engine for a very competitive price. Riding position is roomy like it’s Honda’s 110 Vision or Suzuki’s 110 Address rivals and the big wheels add stability on bumpy roads and tight urban turns. Enough performance to cope with city riding, but a few mph and mpg down on the class-leading Japanese or Italian competition. 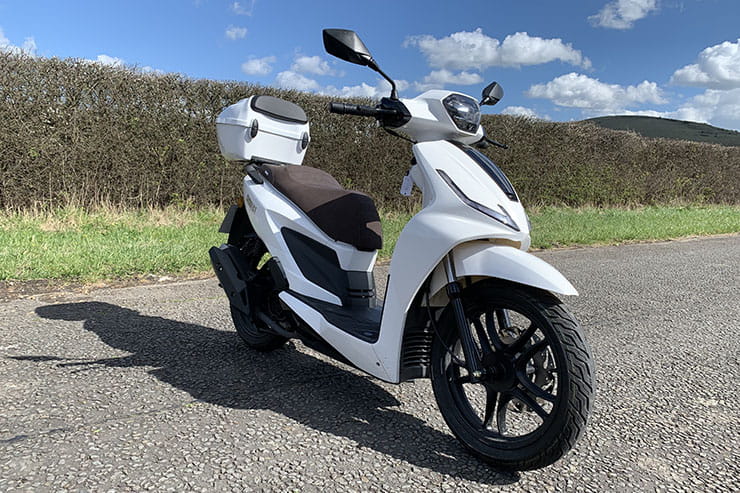 Styling is up to date and the Connect is put together well. It looks great in the flesh

At £2299 the Connect 125 is £450 cheaper than Honda’s 110cc Vision and £700 less than Yamaha’s 125cc D’elight. Comparing it to the Japanese manufacturers’ range-topping scooters such as Honda’s SH125 or Yamaha’s NMAX 125 or Tricity brings massive savings, but the difference in features and quality to those scooters is significant.

The other consideration might be that the Japanese manufacturers have flexible finance offers designed to suit most people where dealers for some of the independent importers aren’t always able to be quite so competitive or flexible on finance. The premium Japanese brands also tend to have stronger resale values. This might not matter if a scooter is your workhorse and you’ll be squeezing every last drop of value from it, but for many riders it’s not just the resale price as the ease of selling that makes a Japanese or Italian scooter worth the extra cost. 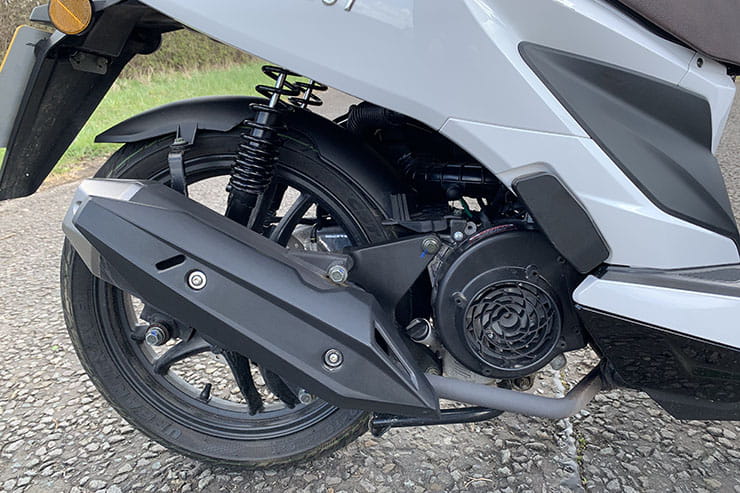 Air-cooled single-cylinder engine is quick enough and economical but feels a little rough next to the latest water-cooled units.

Sinnis use their older air-cooled engine in the Connect, which makes just under 10bhp. That’s a couple of horsepower down on the class-leading 125s but on the road you don’t really notice. The Connect’s light weight lets it get away from traffic lights briskly enough to be ahead of the four-wheelers. It accelerates to 40mph as quickly as you need it to and then builds speed easily to a maximum of around 55-60mph (depending on the gradient and amount of flapping, bulky riding kit you are wearing).

The throttle response is sharp enough to feel responsive, but with gentle-enough pick-up from a closed throttle that it won’t frighten new riders by being too sharp.

As on most scooters, there are no gears, but a continuously variable transmission (CVT) driven by belts and pulleys that keeps the engine in its optimum power band for responsive, economical riding.

In typical urban use we managed just under 100mpg. Sinnis don’t quote a tank capacity, but its Suzuki and Honda rivals have around five litres. Assuming the Sinnis is similar, you should expect around 120 miles between fill-ups. 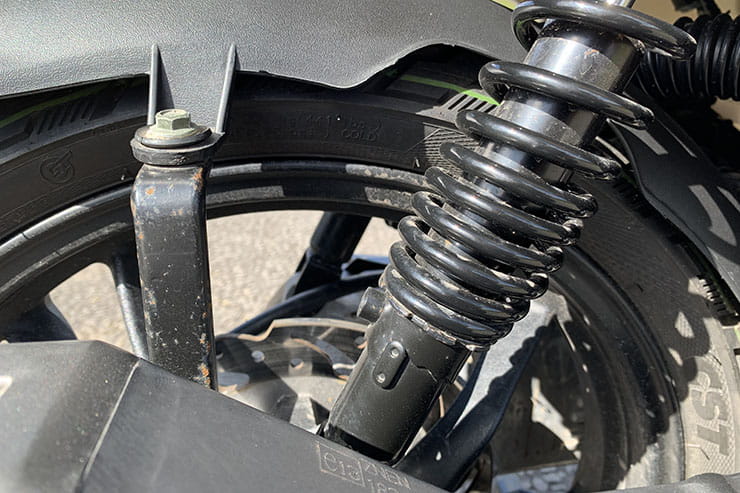 Suspension is soft enough to soak up the bumps. Preload on the rear springs can be adjusted to allow for taking passengers (once you’ve passed your test) or delivering bricks.

When motorcyclists talk about ‘handling’ they usually mean a bike’s ability to go around corners. That’s important on a scooter too, but equally necessary is agility; being able to nip in and out of traffic queues, do a U-turn in the smallest possible space and flick in and out of mini roundabouts like a BMX.

The difference between small wheeled and big wheeled scooters is that the former do these things better but sometimes feel a little twitchy or struggle to cope when their tiny wheels crunch down a pot-hole. The big-wheeled scoots feel happier at bigger lean angles and have a better ride quality on crumbling, bumpy road surfaces. Sinnis has found a good balance between nippiness and stability on the Connect. It’s an easy bike to manage and also the seat height is just low enough that even those with shorter legs should be able to reach the floor.

The suspension is soft enough to soak up the bumps but reasonably well-damped too so it settles quickly without resembling a pogo-stick (does anyone under the age of 40 still know what a pogo-stick is? If not, ask your dad) 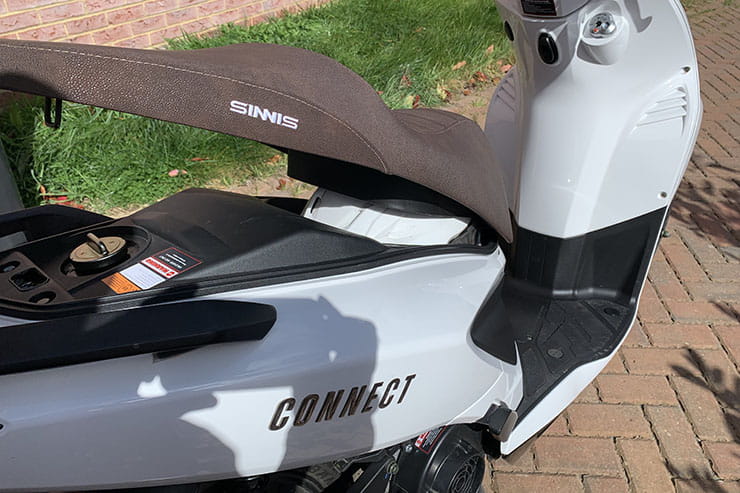 Seat is comfy and storage space underneath is fine for locks and oversuits. You can’t fit a full-face helmet in there though.

Scooter comfort is about having the room to sit comfortably, a seat that supports for up to and hour at a time and some kind of weather protection from the leg guards. It also helps when the controls are straightforward to use and mirrors give a decent view behind (because you use scooter mirrors a lot). Instruments should be easy to read, with an  accurate fuel gauge that lets you know when there’s 30 miles or so of fuel remaining and enough space under the seat for your lock and chain while riding and helmet, gloves and thin fold-up rainsuit when parked. Oh, and some kind of USB port is handy to charge your phone/sat-nav on the move.

The Connect 125 does all the above with one possible exception. The room under the seat wouldn’t hold any of the open-face or full-face helmets we tried. You’ll need to buy the optional top box or haggle with your dealer to throw it in for free. 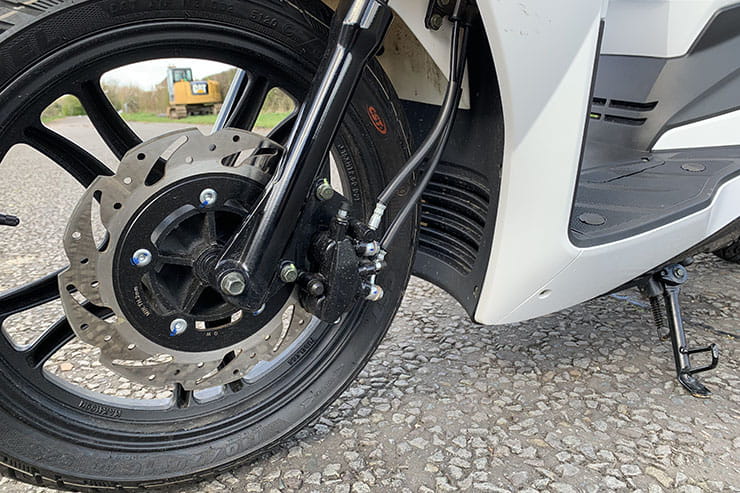 Front and rear brakes are linked. Pushing the foot pedal operates 30% of the front brake’s power. Front disc doesn’t take a disc lock, but the big wheels do allow a U-lock

Single disc brakes front and rear are effective but not too sharp to overwhelm the new riders the Connect is aimed at. There is enough feel to let you scrub off a bit of speed in traffic just using the back brake (which, being linked, also operates a small amount of front brake too), but when used together there’s power to bring the bike to a halt with confidence. Small bikes aren’t required by law to have ABS and linking the brakes is a low-tech substitute for ABS.

Like many scooters the design of the Connect’s brake discs makes it impossible to use a disc lock to secure your bike. Thankfully, the big wheels mean you can get a U-lock through the spokes if you prefer that to a lock and chain. 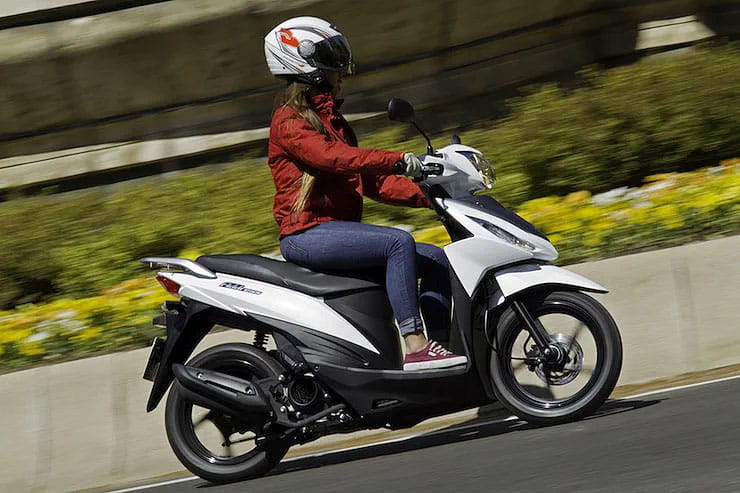 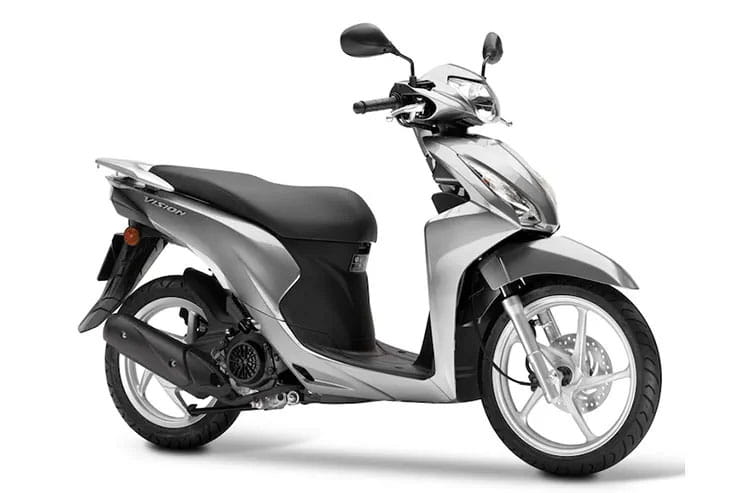 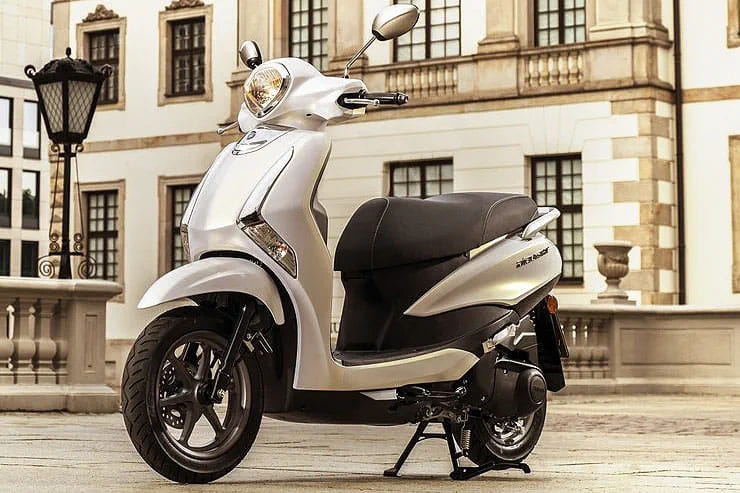 Honda’s Vision is the benchmark lightweight scooter. Easy to ride, built to a very high standard and impressively reliable to very high mileages if looked after. It also weighs 20kg less than the Sinnis. Fast enough for town riding with a top speed around 55-60mph. More economical too at an easy 120mpg.

Similar spec and performance to the Honda above but usually a little cheaper to buy. Suzuki GB no longer import the Address 110 but there are still pre-registered brand new examples on sale in dealers and plenty of used bikes around.

Slightly more pricey than the Honda and Suzuki, but probably the most fuel-efficient vehicle on sale that will also do 55mph and 150 miles between fill-ups. The latest version has stop-start technology and a claimed fuel consumption of 157mpg. That’ll be more like 140mpg in real world use, but that’s still impressive

A brand new 125cc scooter on the road for less than £2500 is definitely worth a look. Sinnis sit halfway between the cheap-and-cheerful quality of many Chinese bikes and the best of the Japanese models. Performance wise they are all pretty much the same. The Hondas and Yamahas will feel a little smoother and more refined but that means nothing if you can’t afford it or the local dealer is out of stock until November.

When most riders buy 125cc scooters as a utility vehicle  for commuting or delivery, the Sinnis Connect makes an easy buy. A two year warranty including breakdown recovery for the first year is impressive. The build quality of Sinnis’ scooters gets better every year and the costs of service parts and spares are reasonable too.

Well worth a look. 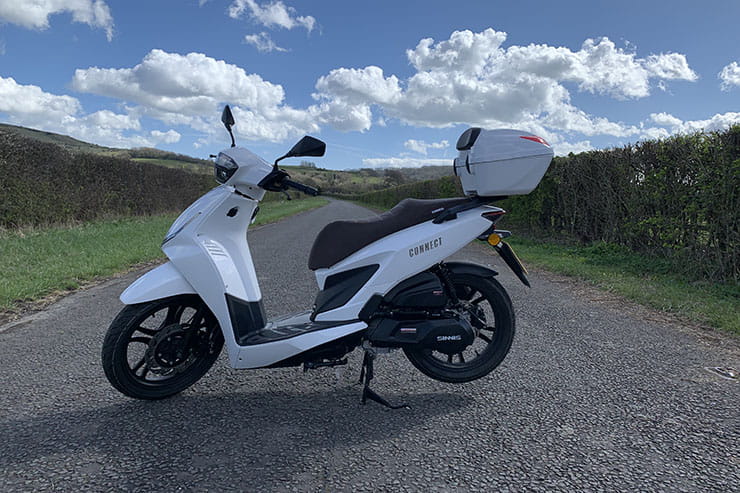 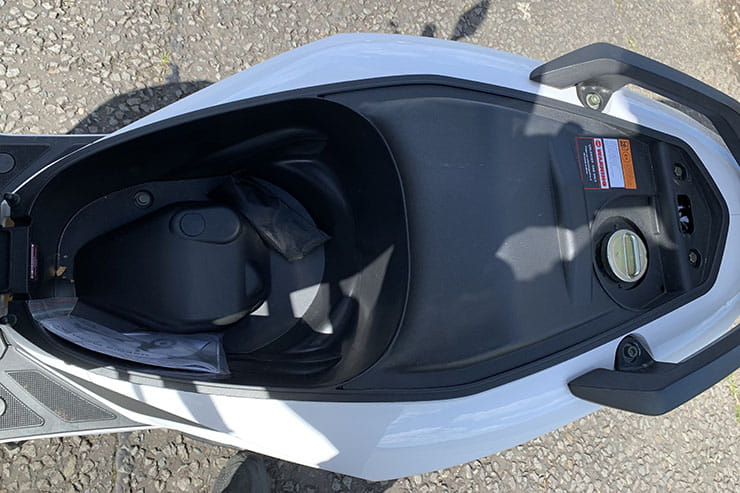