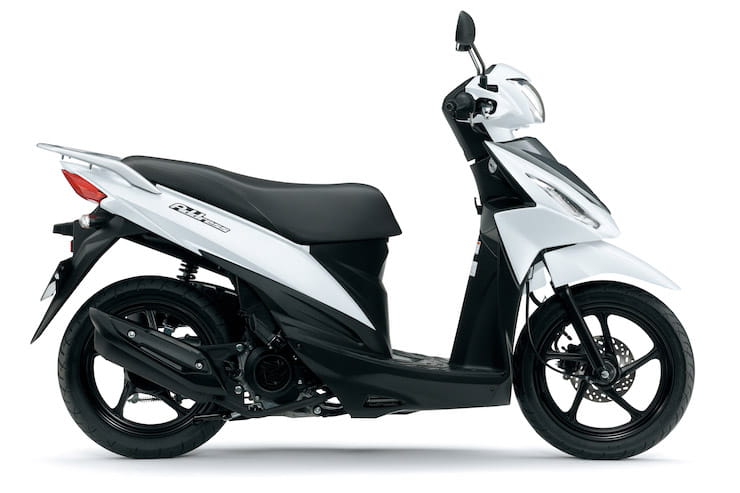 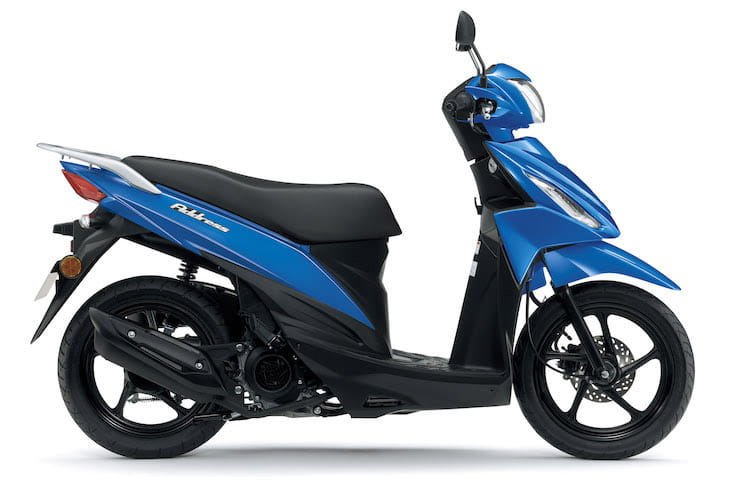 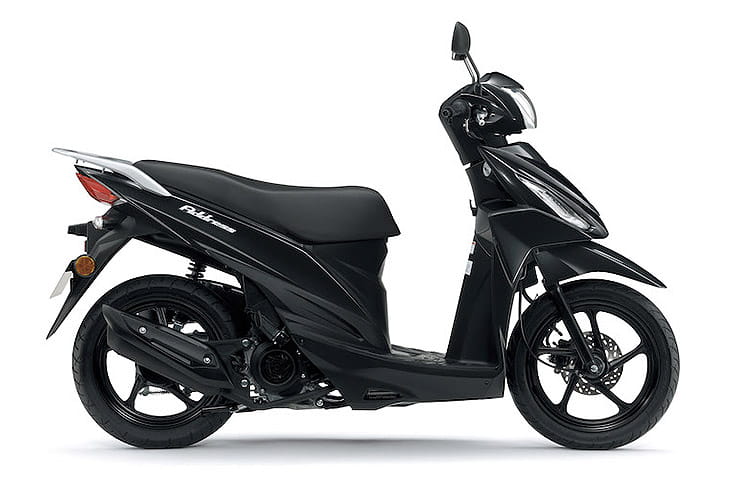 Suzuki’s Address 110 commuter scooter is something of an oddball – but a good one. Generally, in the UK 50 and 125cc scooters are always going be popular due to our licence categories, so the 110cc Address is neither here nor there, although it’s not alone. There’s the more expensive Honda Vision 110 for instance.

The smaller capacity, plus the fact it’s air not liquid cooled, enables the Address to be light and very frugal on fuel, cheap and yet at the same time remain a decent, commuter-focussed scooter from a name you can trust. And although you’re hardly likely to show off about it to your mates it’s also fairly pleasing on the eye.

VIDEO: Check the Scooter commuter challenge we set up where the Address 110 ‘races’ a Suzuki Burgman and a train during rush hour

That economy, resulting popularity and the Address’s decent durability and reliability also combine to keep used prices high. Although older 110 versions can be had for as little as £1,200, generally you’ll need £1,600+ for a good one. 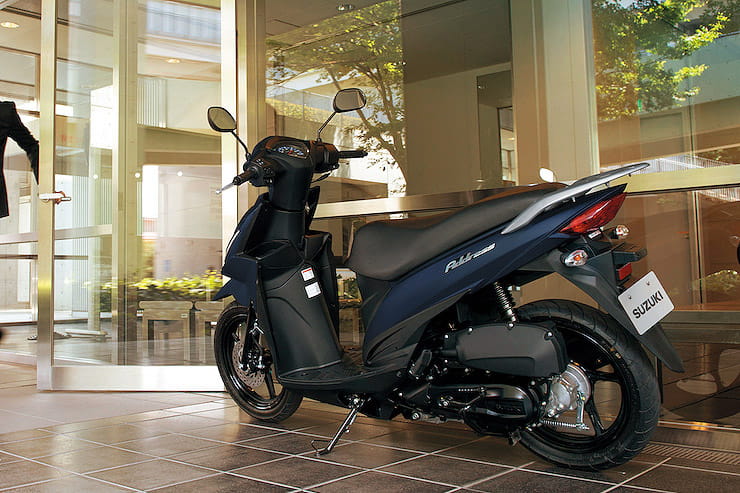 Around town is where this scooter is most at home and for urban riding the Suzuki has got plenty of zip and, with virtually no weight to carry around, it’ll accelerate briskly up to 50mph.

Top speed is not what the Address and its ilk are all about, but on faster roads such as dual carriageway I did see over 70 showing on an occasion or two (although that did involve both the wind and the road incline being in my favour – have both against you and you might struggle to top 50).

Importantly though, it can keep up with traffic on the open road but try to overtake and you’ll be running out of steam. From experience, 125s will offer slightly more performance and if your commute involves faster roads you might want to think about investing in a 250.

Mechanically, it’s a basic package. There’s no water-cooling for the fuel-injected engine, one of the reasons why the Address 110 weighs in at a featherweight 97kg ready to go, a good 30kg lighter than the trendier 125s from Honda and Yamaha. While its 113cc does at times make you think a 125cc would have been more useful. It also feels physically small compared to other scooters on the market.

Having said that though, if you mainly need a scooter for nipping around town and doing rides of 10 to 15 miles the Address will do the job well enough. 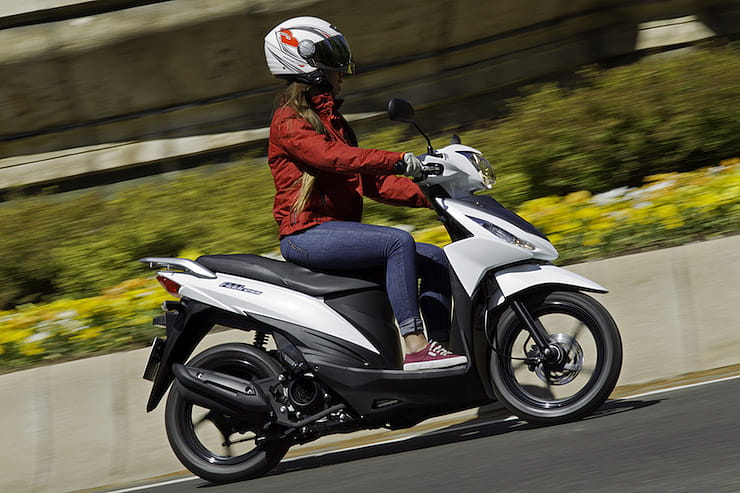 Car drivers will probably be more impressed at its fuel-efficient nature – how does Suzuki claims of 145mpg sound? Although manufacturer figures are obtained in controlled environments and are rarely achievable in the real world, in the near 300 miles I spent with the Address, I was able to return an average of just under 120mpg, which included a significant amount of time spent on the stop on dual carriageways.

That theoretical 145mpg computes into a range of 165 miles from the Address’s 5.2 litre fuel tank. One of my regular journeys is nine miles each way, so, theoretically, I can commute for nine days without having to fill it up – not that it’ll cost much to fill anyway. Less than six quid will brim the tank so it’s a fair bit cheaper than most other modes of transport and a damn site more convenient than public transport.

Although smaller than most 125cc scoots and fairly unsophisticated, the Address 110’s suspension is surprisingly plush. I tried riding flat out over speed humps and the front forks and single rear shock soaked up the bumps nicely. I’ve ridden plenty of more expensive scooters with suspension nowhere near as good.

The standard fitment IRC tyres are perfectly fine and grippy enough in the dry and, although lacking a little feedback, gave me confidence in the wet, so no complaints there. As a package it all works together quite well although the choice of skinny 14” wheels limits the choice of replacement options from the bigger brands. 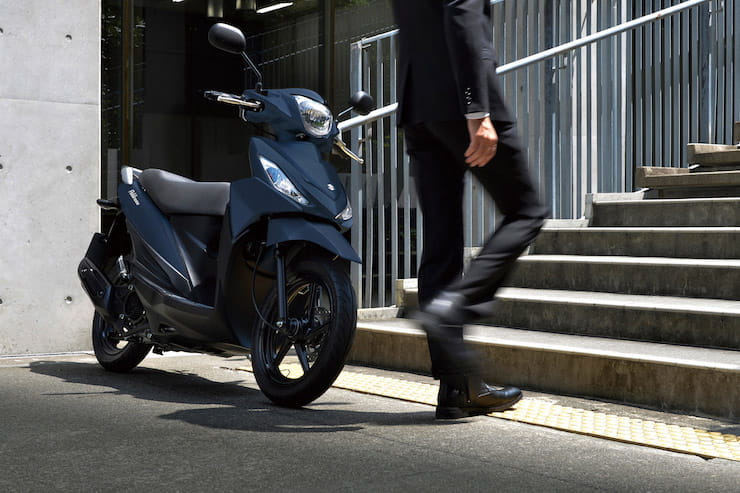 Like many cheaper end commuters the Address has a drum rear brake and a disc up front. That said, they’re pretty good and more than adequate, delivering plenty of feel through the front lever and enough bite at the rear. Used together they work perfectly.

The Address has a nice upright riding position that gives good visibility; it is agile and stops well enough. Weather protection is surprisingly good on the open road and the simplicity and lack of weight make it a joy to ride in traffic.

My only real gripe is around the pillion provision. Let’s be clear, it’s not the kind of scooter you’re likely to buy if you plan on carrying a passenger on a regular basis, although it does comes with a neat rack/passenger grab rail at the back. But I found that riding around with a mate on the back was less than ideal, with the seat proving a touch on the small side and the weight of a second person upsetting the balance of the machine and making it very nervous at slow speeds.

Equipment-wise, the Address 110 is not packing many goodies. It comes with an analogue dash that includes a fuel gauge and also has a parking light and an anti-theft cover for the ignition switch. The analogue speedo is easy to read, as is the fuel gauge, which you wouldn’t always expect on an entry-level scooter. Otherwise the instrumentation is as basic as basic can be.

Control wise, it’s as simple a twist and go as you can get. There is a kick-starter, but with an electric starter it is basically redundant.

The seat lifts up to reveal underseat storage that’s fairly roomy (25 litres) which will happily take a full-faced helmet (or bag of shopping). There’s also a bag hook down by the rider’s legs behind the leg shields for an open storage space plus some trays like you’d find on a car dashboard, although they are a little shallow for my liking.

There are fancier scooters out there and a few gadgets that I’d like to have. I would really have appreciated a small clock for my daily commute. A lockable glove box with a USB charging port would be nice, and I’d have liked grippier tyres, if I’m being honest.

That said, Suzuki does offer a range of official accessories for the Address, some of which are worth a look for the serious commuter. Key among these options are a windscreen and 30 litre top box to improve practicality. Heated grips are also an option, as well as some hand guards, which we are hoping are really effective – as they certainly don’t do anything for the looks. Neither, for that matter, does the ‘Body Graphic Kit’, which is an affront to retinas everywhere. I mean, Suzuki, really, what were you thinking? It wasn’t cool in the 1990s and it certainly ain’t cool today. 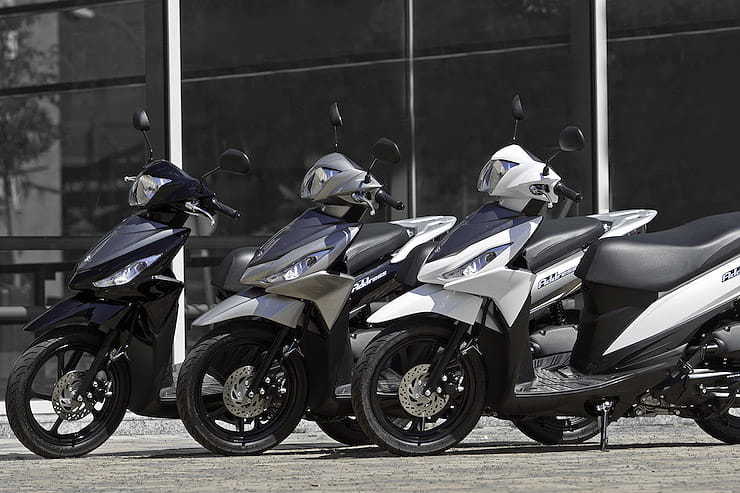 Around £2,000 can give you a good range of sub 125cc machines to choose from, so there’s plenty of choice but the Address 110 is certainly a contender. It may not be flash or fast but at its price it’s not a bad choice for the commuter on a budget.

Many commuters are price-driven but still want the reassurance they are buying quality. With the Suzuki you get a brand name and all the reassurances that brings with it. There are manufacturer backed finance deals and you know that there is a certain build quality attached to a Japanese brand. There will also be a dealership in your local town for servicing and knowledge that parts will still be available in years to come. You might be able to buy cheaper scooters from brands you’ve never heard of but, in the long run, there’s a good chance that initial saving will be a false economy.

Three things we love about the Address…

Looking for scooter insurance? Get a quote for this motorcycle with Bennetts motorbike insurance