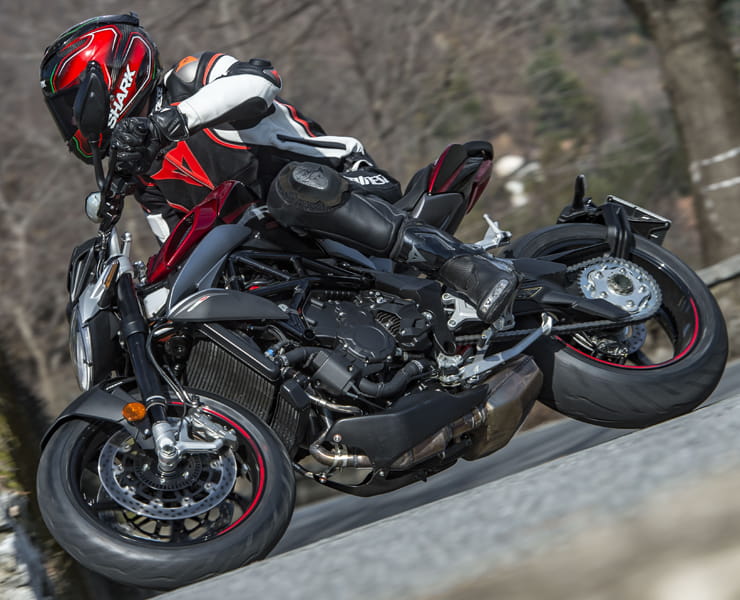 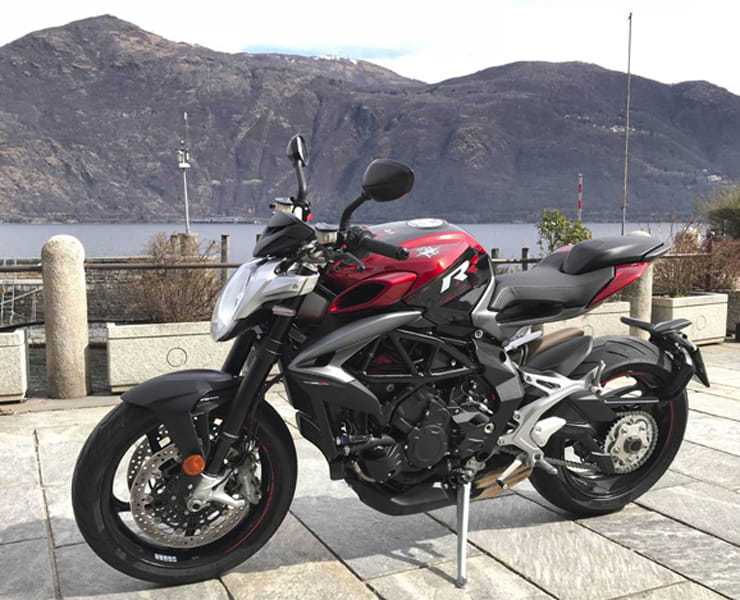 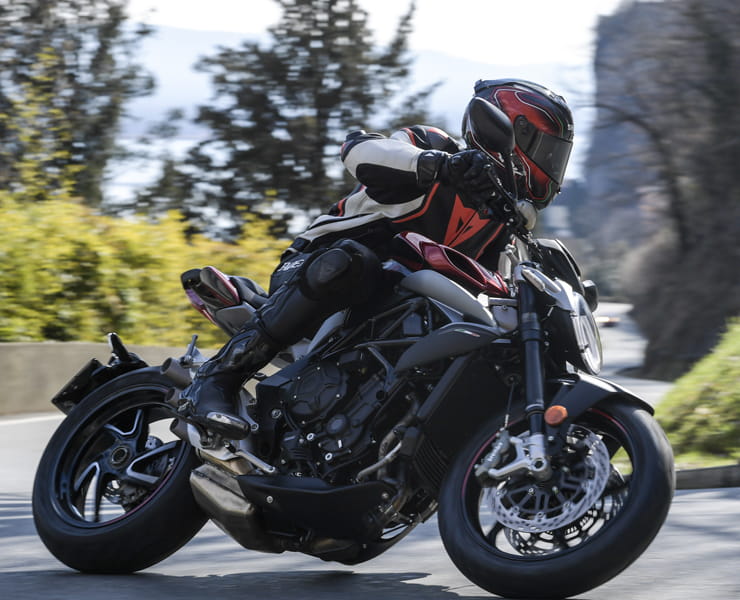 Lots has happened at MV Agusta since the firm from northern Italy updated its family of naked triples with the raw and racy Brutale 800RR just over three years ago – much of it bad. Problems with bike sales and supply, the withdrawal of backer Mercedes AMG and clashes with distributors led to Brutale sales suffering and MV’s bold plans for expansion being put into reverse.

But now MV is back with fresh investment and a clearer focus on its key aim: creating and selling exotic, exclusive bikes. And the Brutale 800RR is back too – revamped for Euro4 with its basic style and specification unchanged, but with a host of updates designed to smooth its rough edges and make this hotted-up version of the standard naked triple quicker and more desirable than ever. 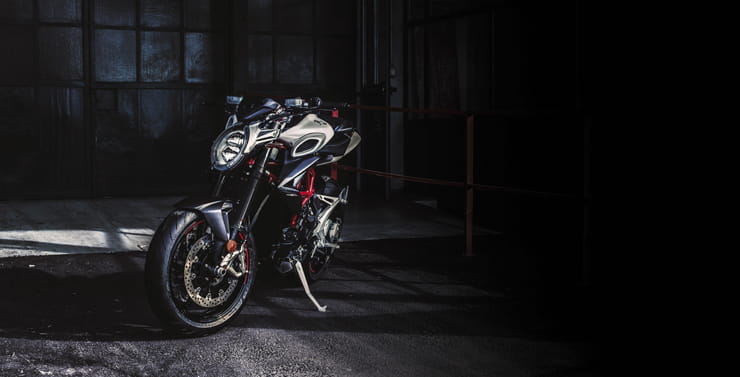 MV Agustas have always been unapologetically expensive, and that goes for the Brutale 800RR too even though it comes from the family of three-cylinder middleweights that has traditionally provided the marque’s entry-level models. At £13,700, the 800RR costs £1500 more than the base-model Brutale 800, but much less than the limited-edition Brutale 800RC, which is an eye-watering £17,200.

Even this updated Brutale lacks some of the high-end features, including TFT instrument panel and cornering ABS, that are appearing on the latest breed of middleweights, notably KTM’s 790 Duke, which costs just £8499. But the Brutale 800RR is much more powerful and exotic machine, making direct comparison difficult. 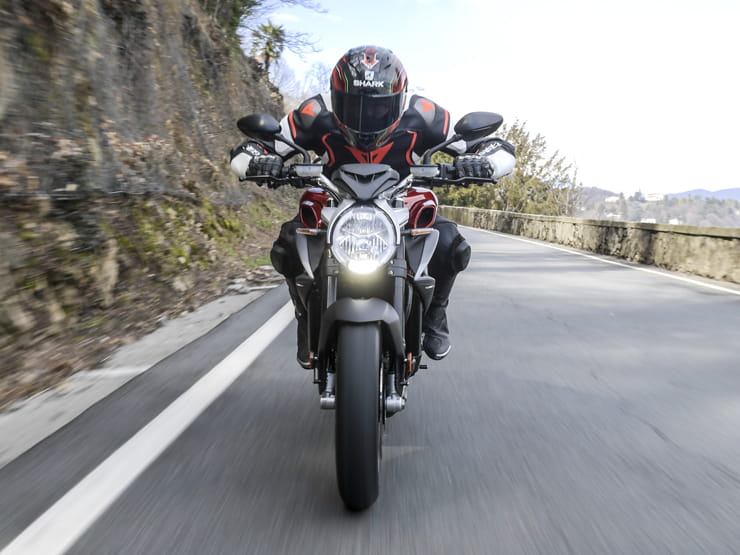 There’s no change to the basic spec of the Brutale 800RR powerplant, a compact 798cc, dohc 12-valve triple that featured a contra-rotating crankshaft long before Ducati’s Panigale V4. The need to get through Euro4 emissions has not altered the maximum power output of 138bhp (140PS), although the peak is slightly earlier, at 12,300rpm instead of 13,100rpm.

MV knew they had plenty of performance for a naked middleweight, so concentrated on refining the Brutale. A new cylinder head and reshaped camshafts give more consistent combustion, for smoother low-rev running. New primary gears and starter clutch system reduce noise and improve reliability. 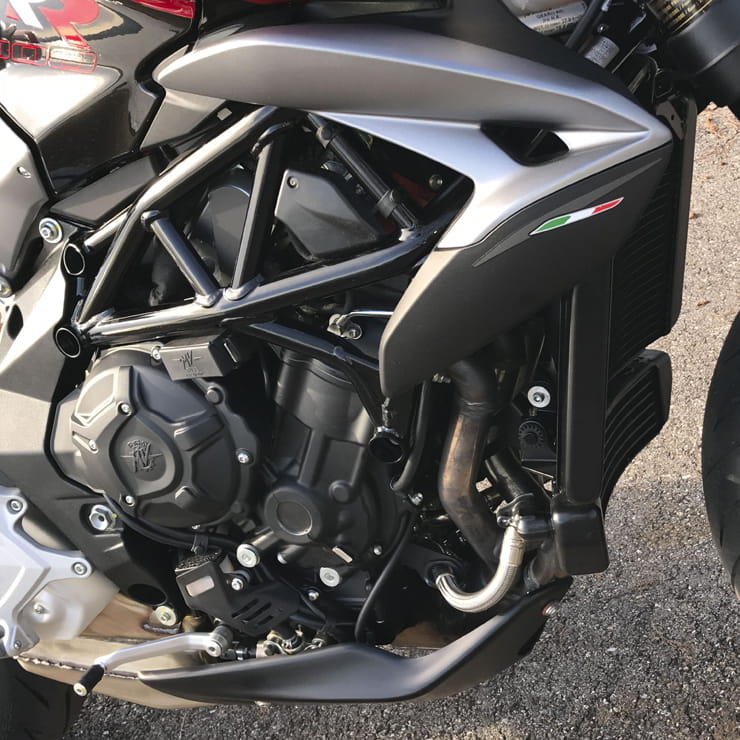 The gearchange is improved with new cogs, for smoother shifting, plus quicker-acting software for the two-way quick-shifter that was ahead of its time three years ago on the original 800RR. And the ride-by-wire throttle’s action is recalibrated with new software and a return spring that is stiffer in its initial travel.

That makes a notable difference because the previous Brutale’s light and over-sensitive throttle made it difficult to control, especially on a bumpy road. This isn’t a problem on the new bike, which runs smoothly at low revs, picks up steadily through the midrange, then comes alive at about 7000rpm as the rev-happy motor gets into its stride. 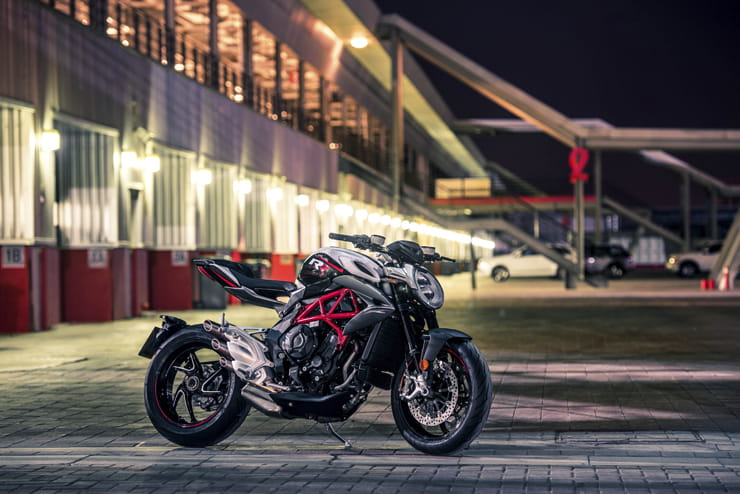 From then on it’s a riot of arm-yanking acceleration, effortless second-gear power-wheelies and massive grin factor, as the Brutale revs towards its 13,000rpm limit through the gears, aided by a light gearbox and sweet-acting shifter. Keep the throttle pinned and your head down, and you’ll soon be seeing 150mph on the compact digital instrument panel that seemed fine three years ago but looks a bit basic and hard to read in these days of big TFT displays. 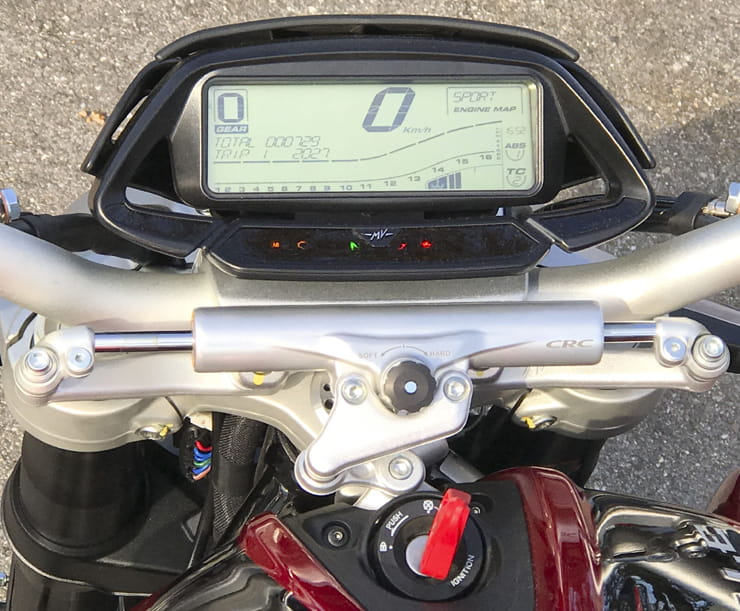 As before there’s a choice of four riding modes, including Rain and a Custom mode, with options for tuning throttle response, engine braking and more. Response in both Normal and Sport was so good that for most of the day on twisty Italian roads I left it in Sport, which was fine even when accelerating out of first-gear hairpins.

The Brutale sounds fantastic too. Slimmer engine covers with improved noise absorption have allowed MV to meet Euro4 regs and also tune the intake and new exhaust system to give a lovely, rasping three-cylinder shriek under acceleration. 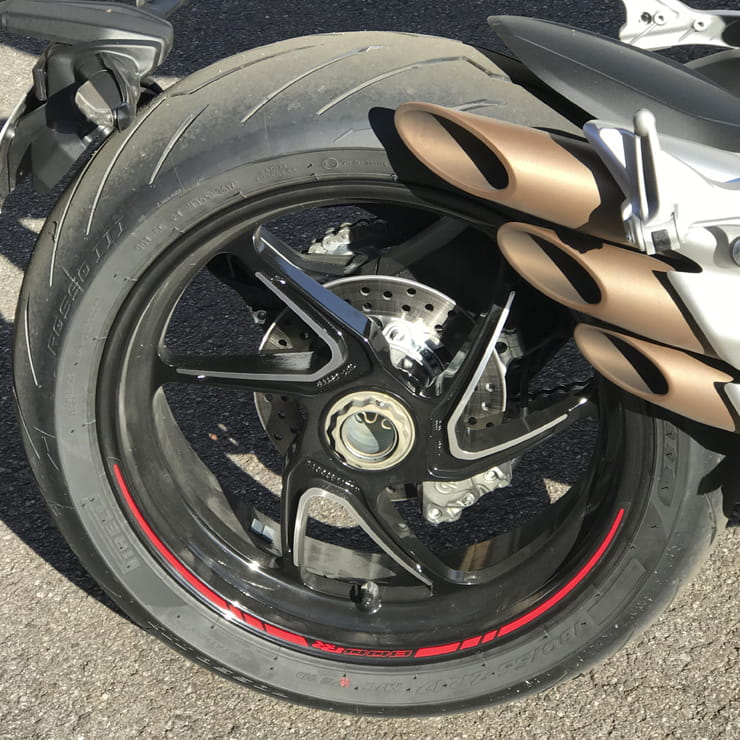 The original 800RR benefitted from the short, light chassis that has served the Brutale triple well, but its handling matched the engine performance by being lively and difficult to control. This RR’s tubular steel trellis frame has its steering head moved forward and opened out to increase rake, trail and wheelbase slightly. It also gains rigidity by mounting the engine with a top bolt on each side, instead of one long bolt running all the way through.

Suspension is revised at both ends. The 43mm Marzocchi forks are reworked with tighter tolerances, to reduce initial friction; and the Sachs shock’s damping system is retuned, mostly to reduce high-speed compression. The result of that was clear on the launch route in northern Italy, where the Brutale coped effortlessly with bumpy back-roads that would have made its predecessor feel harsh.

The more relaxed geometry also helped, because with its light weight (175kg dry) and wide handlebar the MV could still be flicked into hairpins with little effort, and was more stable both through the turn and when accelerating out again with its front wheel feeling light. You’d need faster roads, and preferably a racetrack, to make definitive comment on its handling at higher speeds and cornering angles, but all the signs were positive. 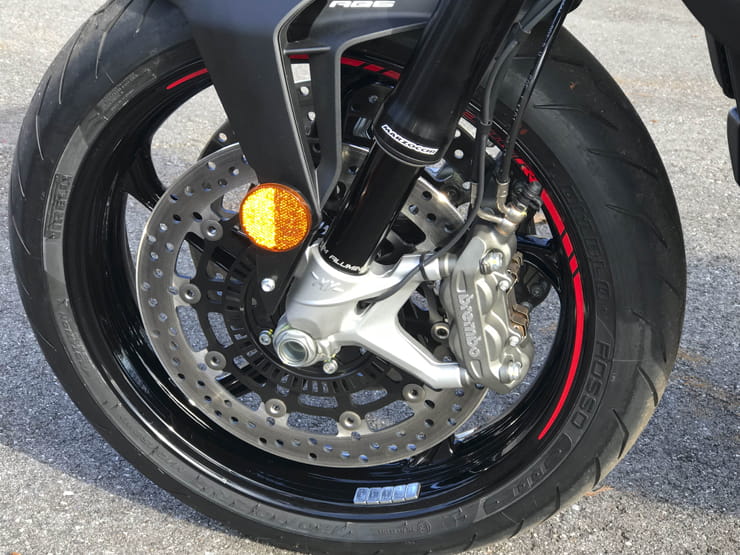 There was plenty of stopping power from the 320mm discs and four-piston Brembo calipers, although initial bite wasn’t as strong as from some systems. Pirelli’s Diablo Rosso III tyres did an excellent job, rarely troubling the eight-stage traction control system even when making use of the slim Brutale’s generous ground clearance.

New and slightly lighter cast aluminium wheels are another chassis update, and among the Brutale’s few visual changes, along with fresh graphics. For a compact bike I found it roomy, despite being tall, and reasonably comfortable thanks partly to the more compliant suspension. 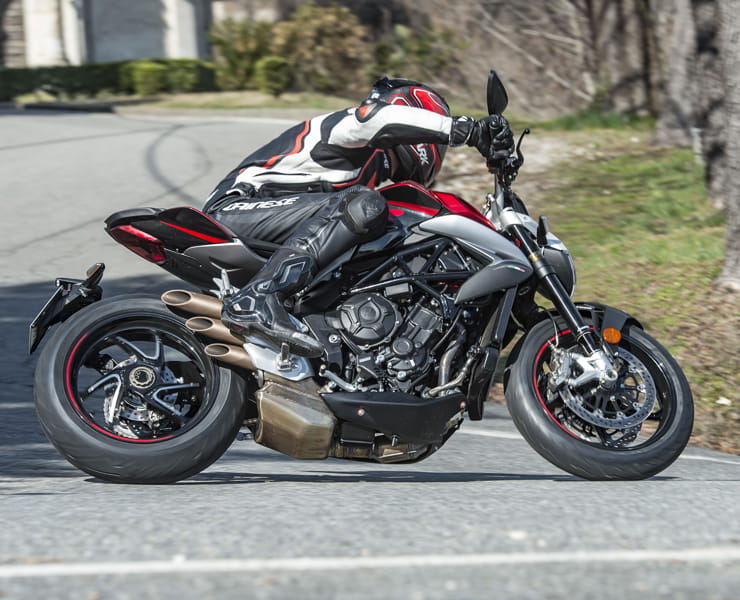 The Brutale 800RR was always essentially a mad, bad naked sports bike – revvy, involving and very quick in a straight line; and light, agile and responsive when it reached a bend. It was fast and fun but undeniably manic, with its light throttle and harsh suspension. The good news is that MV have cured those issues, and the result is a Brutale that is both quicker and much more enjoyable to ride.

In the current middleweight market, some riders would expect modern features such as a TFT screen and cornering ABS from a middleweight costing well over £13,000, and they’d have a point. But it’s hard to fault MV’s decision to concentrate on improving the naked triple’s core elements of throttle response and handling ability.

In some respects the Brutale 800RR is not the most advanced of naked middleweights, but it is now considerably more refined – and it’s still arguably the most stylish, rapid and exciting of the lot. 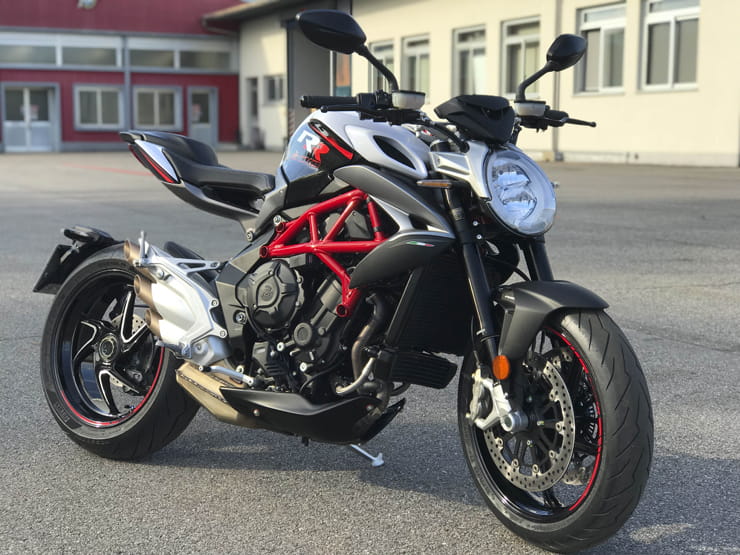 For more information on this bike and the rest of the MV Agusta range, click here.