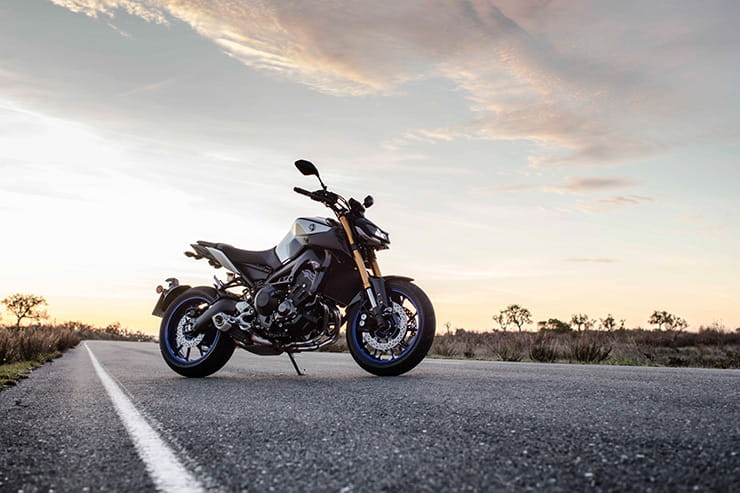 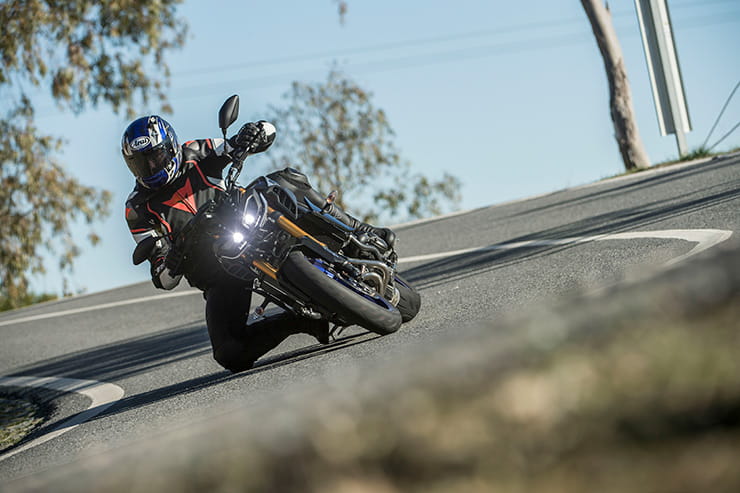 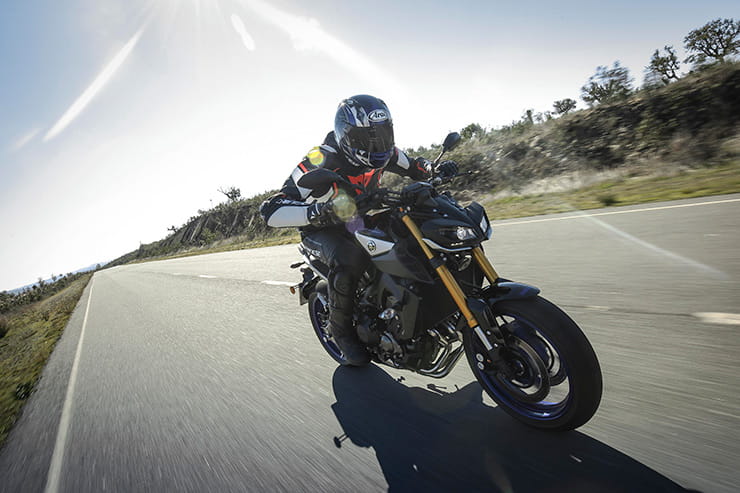 The MT-09 SP is the latest in a line of SP models that goes back past Yamaha’s own recent MT-10 SP to the YZF-R1 SP and YZF750 SP of previous decades, all the way to the hotted-up specials that Italian manufacturers built in small numbers for racing homologation in the early Nineties.

Those SP initials originally stood for Sport Production, but have come simply to mean something a bit Special, especially when attached to naked bikes that aren’t intended for racing. Over the years SP models have featured tuned engines, trick chassis, carbon-fibre bodywork and more. 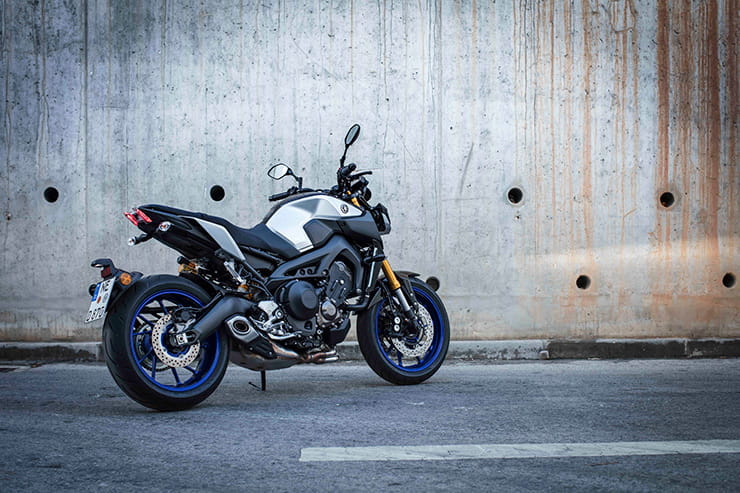 When Yamaha came to create an SP version of their hugely successful MT09, they didn’t have to think twice before deciding that its key components should be uprated suspension. The standard naked triple has been a huge and well-deserved hit since its launch in late 2013, when it led the Japanese firm’s charge back from the dark days of the credit crunch.

That first 847cc naked hooligan machine epitomised Yamaha’s regained spirit and sense of fun, captivating everyone who rode it with its super-torquey and characterful three-cylinder engine, light weight, lean looks – and, equally importantly, with its ultra-competitive price of well under seven grand.

Almost everything about the original MT was great, and neither its snatchy throttle nor its distinctly bouncy and under-damped suspension prevented it from becoming instantly popular. Yamaha moved quickly to calm the throttle response, and have also tweaked the standard MT’s chassis to good effect. 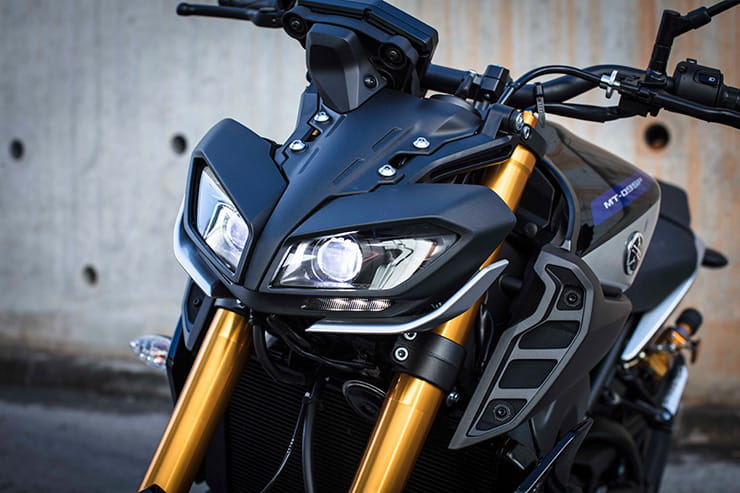 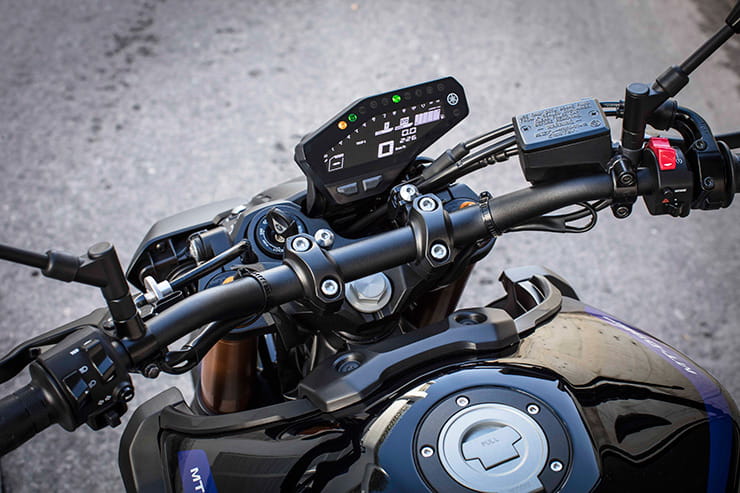 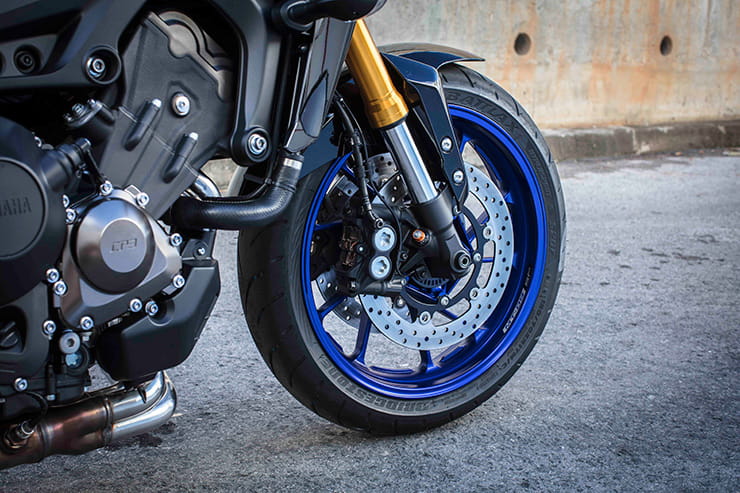 Last year’s revision, which introduced sharper styling, LED lights, a quick-shifter and slip-assist clutch, included new front forks. They’re adjustable for both compression and rebound damping, and reduce but don’t completely cure the front-end vagueness of a model that has a generous 137mm of front suspension travel, compared to the MT-10’s more typical sports bike figure of 120mm.

Yamaha’s decision to create an MT-09 SP, following the success of last year’s MT-10 SP – which sold almost half as many units as the standard four, despite being much more expensive – provided the firm with an opportunity to give the triple the suspension upgrade that its brilliant engine had long deserved.

Öhlins was the obvious choice to provide it. The Swedish firm used to be owned by Yamaha and has provided springs for numerous high-end models over the years, including the MT-10 SP and even more exotic R1M. Those models’ semi-active system couldn’t be justified on the less expensive triple, which instead gets a conventional, multi-adjustable shock with remote preload adjuster. 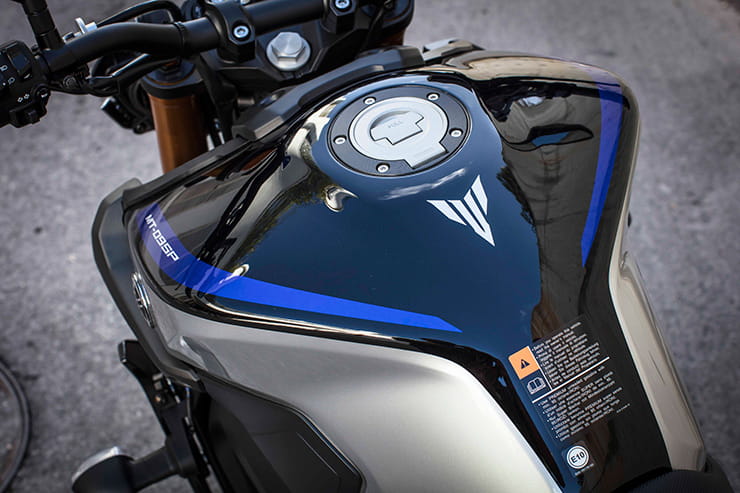 Yamaha also considered Öhlins for the forks, but that would have bust the budget of a model that needed to sit below the standard MT-10 in the product range. Instead they went for upmarket Kayaba units featuring dual- instead of single-rate springs, and adjustability of both high- and low-speed compression damping, as well as preload and rebound damping.

Other changes over the current standard MT are minimal. The SP gets a silver-blue colour scheme similar to those of the MT-10 SP and R1M, incorporating blue wheels and seat stitching. Its handlebar and levers are black instead of natural aluminium, and its minimalist instrument panel’s figures are white on black, rather than the other way around.

With no change to the 113bhp powerplant or the rest of the chassis, it’s no surprise that the SP is every bit as light and lively as the standard MT-09. The three-way adjustable drive mode gives Standard, that’s just about right much of the time, plus a sharper A mode that is fun but a bit aggressive, and a softer B that’s ideal for town or wet-roads use. 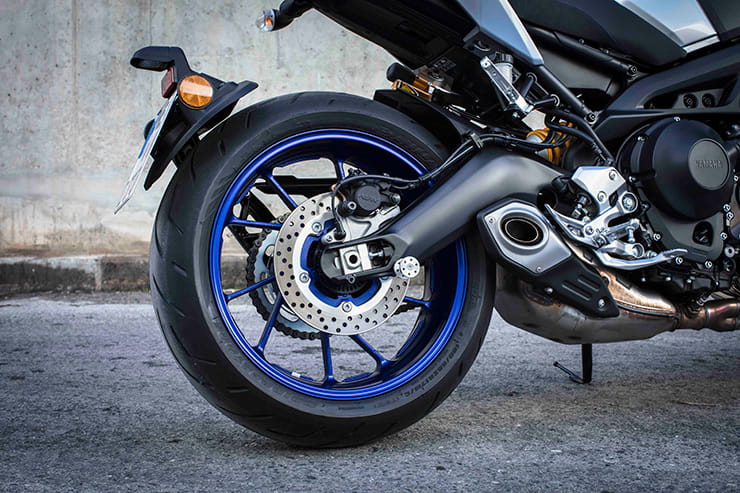 The SP weighs just 193kg with its tank full, and is sufficiently slim to be very manageable at low speed. And that superbly flexible motor means it pulls effortlessly from low revs, lifting its front wheel with a tweak of throttle if you’re in the mood (even with traction control, on its lower setting), or simply surging forward with a smooth rush of acceleration in the higher gears.

The upright riding position means there’s plenty of wind pressure on your neck and arms as the Yam storms towards its 140mph top speed, though the angled headlamp surround gives a modicum of protection. 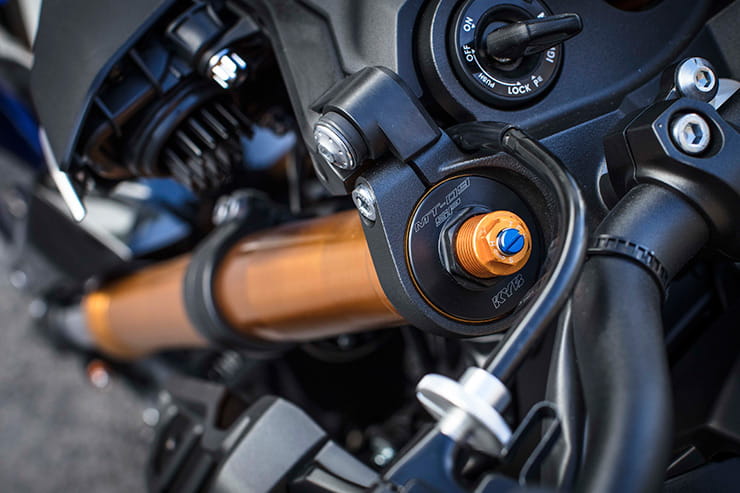 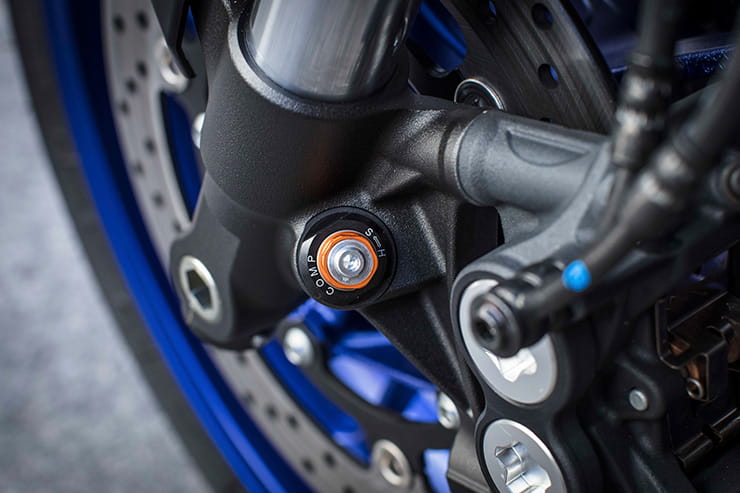 As with the standard model, the quick-shifter is welcome and works reliably, although the six-speed box has a slightly notchy feel. There’s no blipper, so you need the clutch for downshifts; at least the slip-assist unit introduced last year is admirably light. The only other minor irritation is that, curiously, the green quick-shift warning light stays illuminated when there’s nothing wrong.

Even in a straight line the SP’s advantage over the standard MT is clear, mostly from the rear end’s superior ride quality. With shock preload wound right down the Öhlins unit felt distinctly plush, soaking up most road imperfections completely, yet keeping sufficient control to prevent the Yamaha feeling flappy under hard acceleration, as the standard MT and XSR900 are prone to do.

The Öhlins unit’s spring is actually slightly softer than the standard shock’s, but considerably increased compression damping, plus more rebound, gives better performance. There’s even more difference up front, where the new Kayaba’s forks have dual- instead of single-rate springs, with the initial 75mm of travel softer, for better absorption of small bumps; and the rest stiffer, in conjunction with a redesigned damping system. 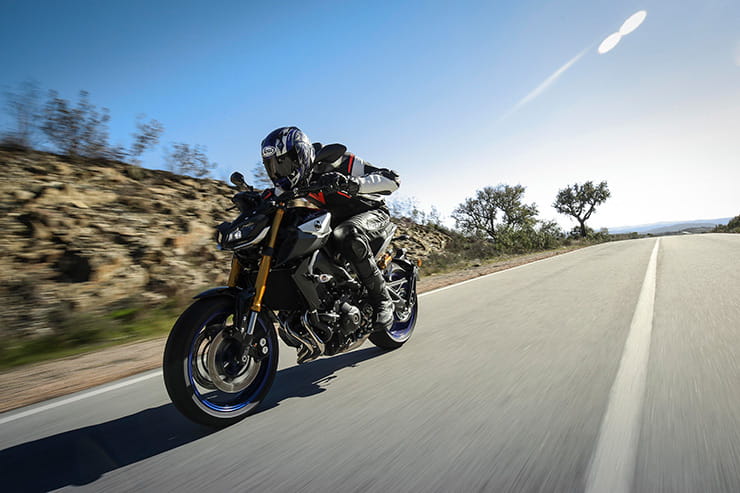 The result is a tauter, more precisely adjustable set-up that finally gives the MT-09 the handling ability that its admirably short, light chassis has deserved all along. For the launch route, Yamaha’s engineers had softened both ends for the sometimes bumpy and occasionally damp launch roads of Portugal’s Algarve, which helped made the triple admirably comfortable.

That was welcome on the early, main-road section, where the pace was gentle, partly because a bunch of Italian journalists had copped speeding fines the day before. I also thought the Yam steered fine over the odd damp patches, turning in accurately in response to light pressure on its fairly wide one-piece bar.

The shock’s preload adjuster is so accessible that it can even be used on the move, and might get in the way of a pillion’s leg. When we stopped for coffee I wound on a few turns, and added a few clicks of rebound damping with the similarly easily reached knob on the shock body. The higher rear end helped the bike turn and made it feel superbly flickable when we reached the smooth, twisty section in the hills north of Faro. 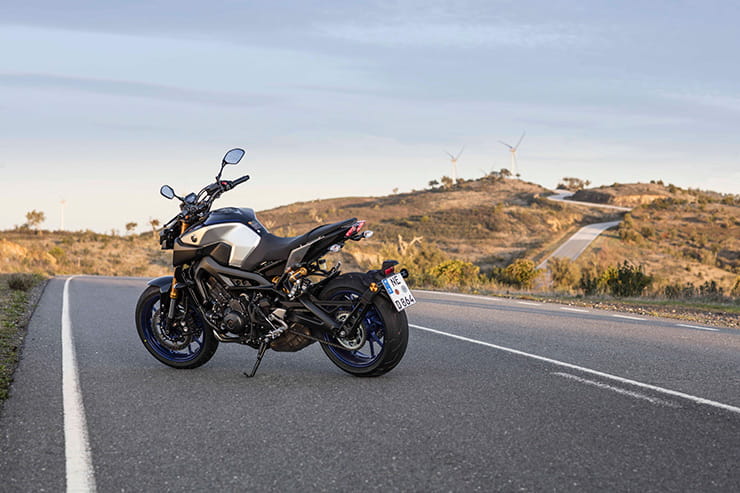 Here the SP was very much at home, especially with a couple of extra clicks of slow-speed compression damping to help control fork dive under hard braking. (High-speed damping is for sudden bumps; slow-speed more for general pitching.) I could enjoy flicking an MT into a tight bend and braking towards the apex, concentrating on tyre grip and throttle rather than on a slightly vague feel coming through the handlebars.

Perhaps the only drawback of better suspension is that you can ride harder, so suddenly start thinking that maybe the front brake could use a bit more bite – although it’s respectably powerful and has always adequate with the standard MT. Or that the SP could also benefit from stickier rubber, though the Bridgestone S20s retained from the standard model coped absolutely fine.

Yamaha’s response is the same as it is to comments that the SP could have Öhlins units at both ends: yes, that would have been nice, as would bigger discs, beefier calipers, Pirelli Supercorsas and even semi-active suspension. But this bike was created to fill the gap between the standard MT-09 and MT-10. So just as with the standard model, compromises had to be made. 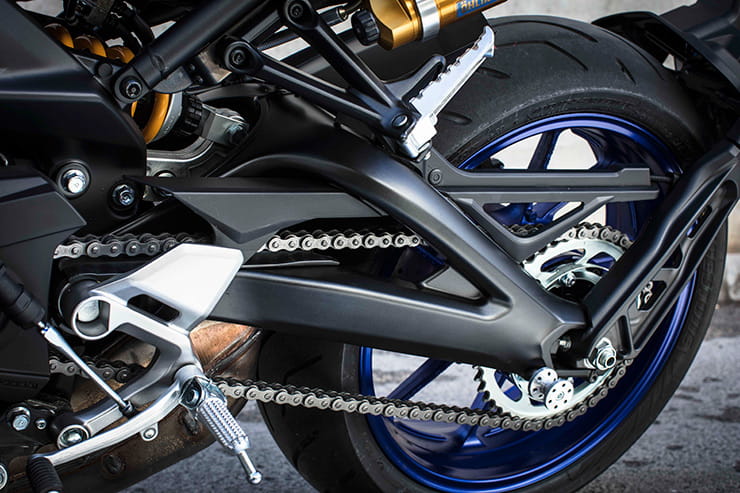 Those compromises seem fair enough, because the good news is that the MT-09 SP costs £8999, so is only £800 more expensive than the standard model (and a hefty £2300 cheaper than the MT-10). That seems like excellent value for a machine that finally brings the chassis up towards the level of that wonderful engine. If the standard MT hadn’t been so successful for these last few years, we’d be tempted to suggest that this is the bike that Yamaha’s naked triple should have been all along.