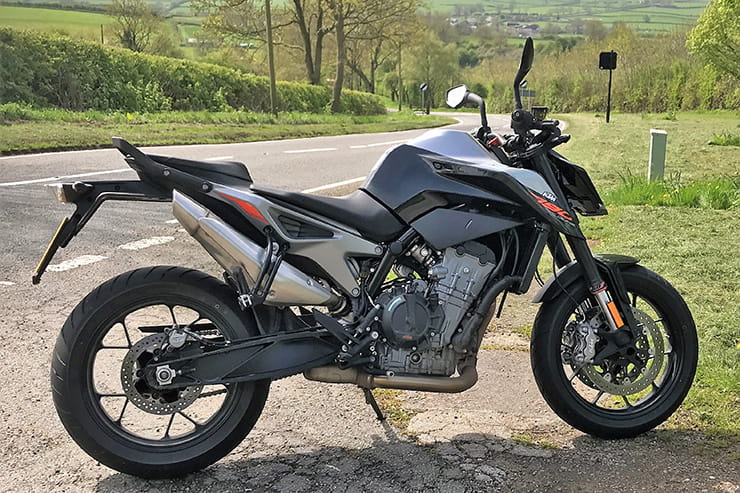 Some bikes just absolutely personify the DNA of the company that built them. Take a ride on BMW’s 1993 R1100GS, Triumph’s Street Triple, a Ducati 916, Yamaha MT-09SP or Honda’s original FireBlade and you’ll learn everything you need to know about their makers’ mindsets in one very entertaining afternoon.

This year you can add KTM’s 790 Duke to that list. Only KTM could build this bike. Only KTM understand that sometimes it’s the way you deliver something that is far more important than the actual thing being delivered. The 790 Duke doesn’t go ballistically fast or handle like a race bike or look like a bike that costs £8499 and is packed to the rafters with state-of-the-art electronic doo-dahs.

But it rides like the bike you secretly always hoped someone would make and every time you get off it the urge to wave your arms in the air, somehow trying to explain what the handlebars were doing in a way that everyone else can understand is irresistible. 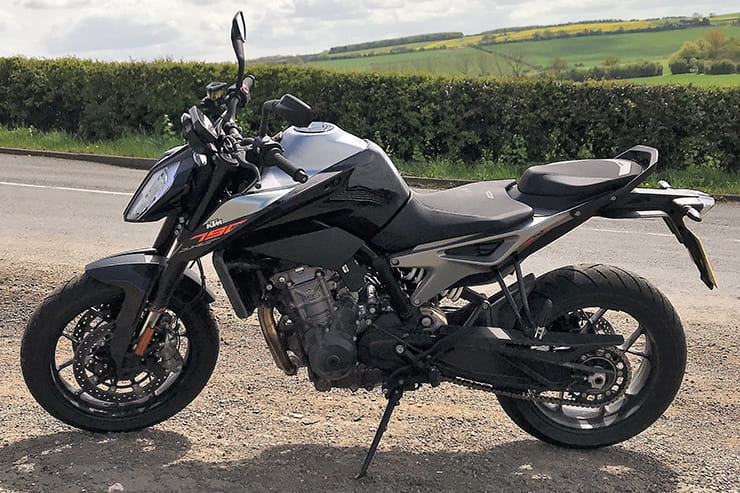 Quickshifter works better than some bikes costing twice as much

If this engine had existed 27 years ago when the EU were proposing a blanket 100bhp limit, they would have probably got their way because, apart from the tuned Suzuki RG500 I was once lucky enough to ride, 100bhp has never felt so exciting. ‘Blat’ is the best way to describe it. Open the throttle and a great fat slab of forward motion takes a short run and kicks you up the backside while the handlebars try and drag you into next week. Five gearchanges go by in the time it takes to remember there’s a quick shifter. To be honest it’s not about power but torque and I’m changing up long before full throttle.

It feels very fast and relentless but, looking down at the dinky TFT dash shows speeds that might cost a hefty fine, but not your liberty. It’s as if someone asked KTM’s R&D dept to make a project that explained G-force, and this is what they came up with.

The engine and gearbox alone would be good enough to convince you on a test ride, but then, after half an hour getting familiar you start to realise that it’s the whole, brilliant package that makes this bike special. The chassis has a knack of keeping things pointing where you want them and anything the suspension might lack in sophistication or adjustable bells and whistles, it makes up for by trying its hardest to keep wheels, frame and rider the same way up as when all this mayhem started.

If you’re looking for calm, serene motorcycling and the freedom of the open road, then look elsewhere.  All your memories on a 790 Duke will be of a fast-moving strip of grey tarmac flicking left, right, up and down with the added bonus-memory of your adrenal gland dumping its recently refreshed contents into your system…again as the Duke’s back end skips, slips and occasionally slides around another bumpy corner. 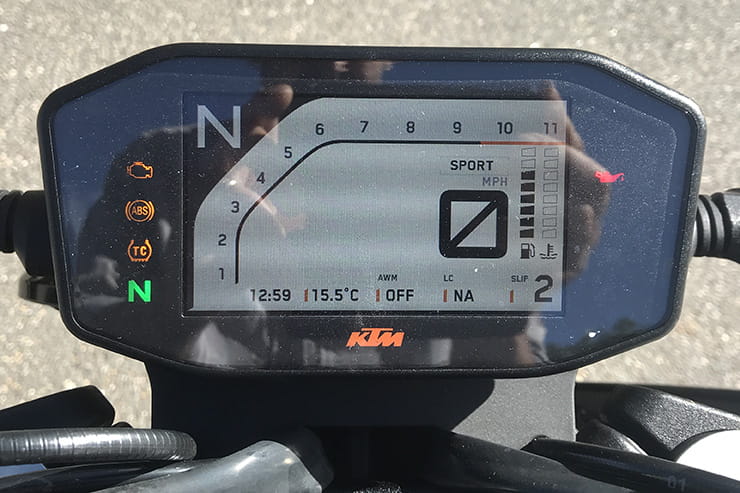 Easy to read, plenty of functions, like an 80s Amstrad hi-fi

Maybe this is the time to explain that I’m not a hooligan rider. I don’t do stunts, no longer do knee down and haven’t done a wheelie since 2003. Bikes like the 790 Duke are in my past, not my present, but right now the way this engine and chassis are combining in such enjoyable lightly-controlled chaos are making me think again.

There are electronics and a gyroscopic IMU plus cornering ABS to temper this sort of thing and, maybe one day I’ll deploy them. But not today. I get why they’re fitted though because the obvious target audience for a bike like this is a younger, dafter rider, still in that wide-eyed ‘motorcycles are HOW fast? Phase. If the Duke 390 is like a two-wheeled Citroen Saxo, then this bigger brother is like a Subaru for 21st Century junior petrolheads. It has the same loopy spirit as every daft motorcycle of every daft generation and comes closest to the super moto fantasy that so many of us bought into in 2004 but no one ever built a bike that delivered. I’m trying not to say modern-day Yamaha 350LC but it’s hard because (other than the fact it makes more than twice the power and weighs almost twice as much) that’s exactly how this bike feels.

I was convinced that anyone who does that ‘considered approach…fast-and-beautiful-riding’ nonsense would hate this bike, but then I hear that a mate who fits that description perfectly, has a 790 Duke and is loving every minute. 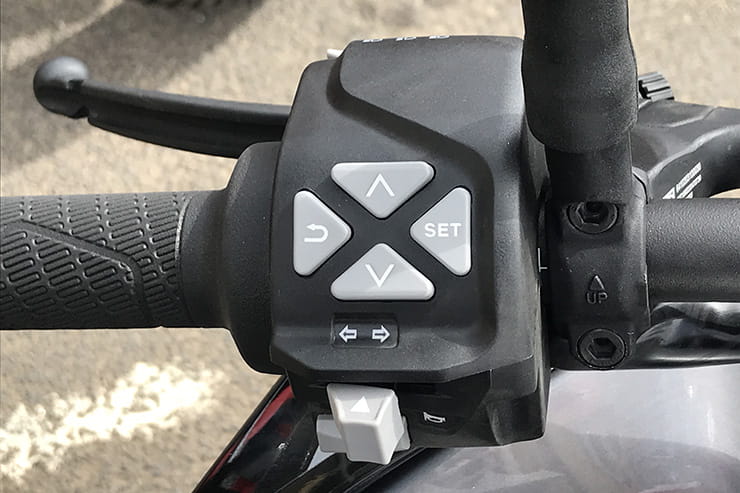 There are niggles. The low-speed fuelling is poor – clunking and snatching as you filter through traffic. The quality and finish of the plastics could be better and, while your kids will simply buy the Duke because of the performance, the grown-ups will be disappointed at the cheap and nasty switchgear and mirrors that appear to be nicked from a 1990s Italian moped. If the Duke cost £6995, we’d forgive that, but it costs £8499 and that’s a lot of money for something with non-adjustable suspension and build quality that in places, still isn’t quite good enough.

Sorry, that’s the old man in me making an appearance. Would you rather have beautiful finish and less rabid performance or something that rides like this thing and put up with the scooter mirrors - which will probably fall off in a few months anyway? 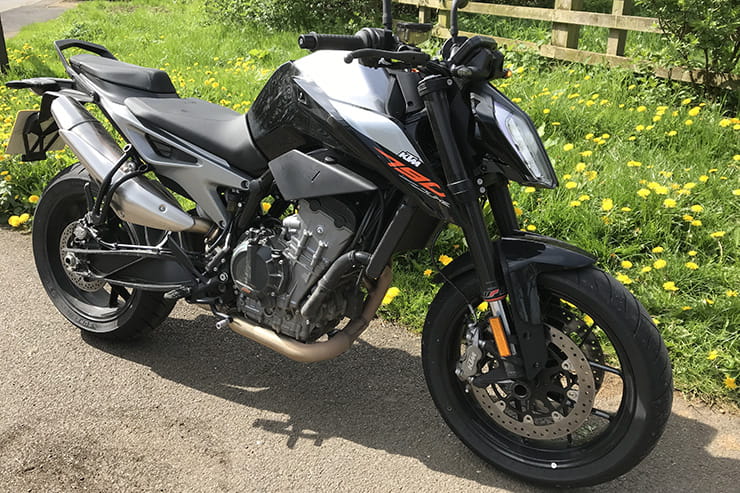