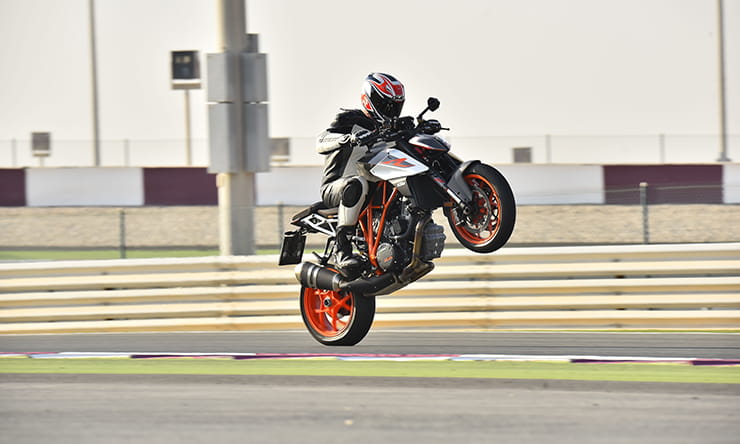 The Super Duke has always been among the sportiest of super-naked bikes, especially since the Austrian V-twin was revamped to become the 1290 Super Duke R three years ago. With its much-hyped “Beast” nickname and 170bhp-plus output, that original 1290 was seriously fast and aggressive, even if its sophisticated electronics package gave the impression of an iron fist in a velvet glove.

Now this year’s arrival of the sports-touring 1290 Super Duke GT has allowed KTM to make the R-model even more hardcore. Welcome to Beast 2.0: an unashamedly naked bruiser launched with a brief blat on the streets of the Doha in Qatar – followed by an afternoon and evening spent flat-out on the Losail MotoGP circuit, including a spot of friendly(ish) drag-race competition.

Cranking through the Qatari circuit’s smooth, fast turns and blasting down the mile-long start-finish straight with the wind trying to rip my head from my shoulders had been fun. KTM’s “Ready to Race” mantra made even more sense, shortly afterwards, as I lined up alongside another rider on that straight, held the throttle wide open and, when the red lights went out, dumped the clutch and let the R-model’s launch control send the bike shooting off the line with maximum pace and minimum drama. 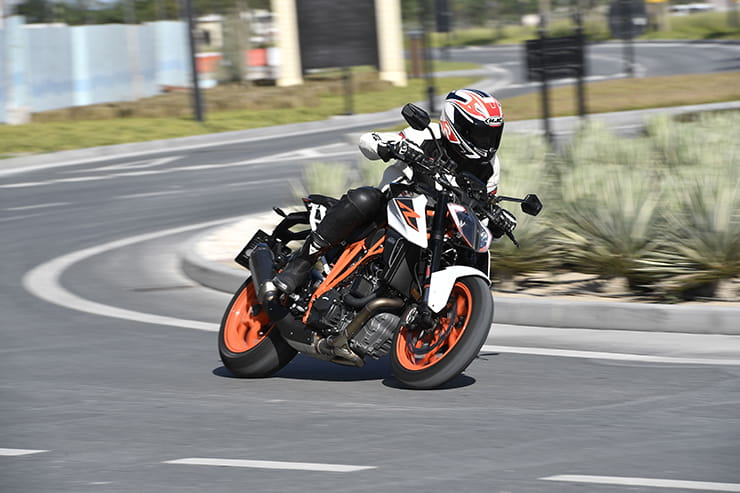 It wasn’t exactly short of power before, but KTM couldn’t resist adding a few horses while revising it to get through Euro 4

Launch control is among several new features, some of them accessories, in a comprehensive update to the KTM’s already advanced electronics package. The R-model joins the Super Duke GT in getting the full Bosch treatment with a six-axis IMU that allows cutting-edge traction control and cornering ABS. A new full-colour TFT display incorporating tyre pressure warning also comes as standard, as do cruise control and keyless ignition.

The 1301cc, 75-degree motor is also revamped. It wasn’t exactly short of power before, but KTM couldn’t resist adding a few horses while revising it to get through Euro 4. Titanium inlet valves save weight and contribute to a slight increase in compression ratio. Shorter intake trumpets also help the eight-valve lump rev 500rpm higher, adding 4bhp to give a max of 174bhp (or 177PS in Austrian speak) at 9750rpm.

The new motor also gains resonator chambers, mounted on its cylinder heads, which KTM say improve low rev power delivery and reduce CO2 emissions by ten per cent. All very admirable, although the environmental benefits seemed rather insignificant as we set off for a road ride through the ever-expanding, energy-gulping desert city of Doha, where the big V-twin’s wonderfully flexible and controllable engine immediately impressed.

Its smoother low-rev running possibly wouldn’t be that obvious even in a back-to-back test, but that’s only because the KTM was so well-mannered beforehand. On Doha’s often slippery streets the Super Duke fuelled admirably crisply in its main Street and slightly more aggressive Sport modes, and even had a respectable amount of punch up to a lower, 100bhp limit when I tried Rain mode for possibly the first time in Qatari history. 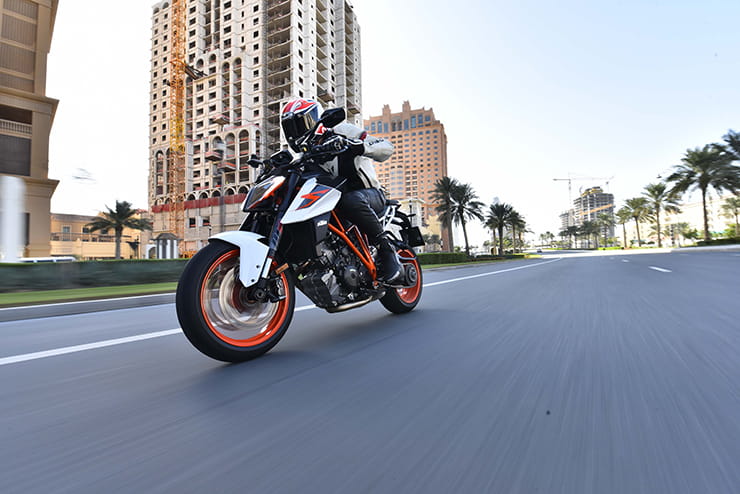 This model also has an optional Track mode, which was the obvious choice next day at Losail. This brings a variety of options, including the ability to adjust throttle response, through three levels, and the amount of slip allowed by the traction control (which can be adjusted on the move through nine levels).

The Track Pack also allows the wheelie control to be turned off independently without disabling the traction control (which the standard bike, disappointingly, still doesn’t allow). And it adds the launch control function, which allows optimum starts with minimal skill. Which was how, in my second start-line drag race, I managed to beat the former pro drag racer who had beaten me in the first race, when we ran without the launch control.

In a straight line the launch bikes also benefitted from the new quick-shifter, a £323 extra. This works both ways and was very efficient even at slower speeds, the couple of times it failed to change cleanly probably being more due to my clumsy action.

On track the Super Duke felt thrillingly fast, as you’d expect of a 160mph-or-so bike with virtually no wind protection. The riding position is slightly more aggressive than the old model’s, thanks to bars that are slightly wider, lower and further forward. But the striking, LED headlight (whose central aluminium structure doubles as a heat sink) is too low to be of aerodynamic assistance. In the heat of Qatar I was glad of the cooling breeze, even so. The UK climate might be less accommodating… 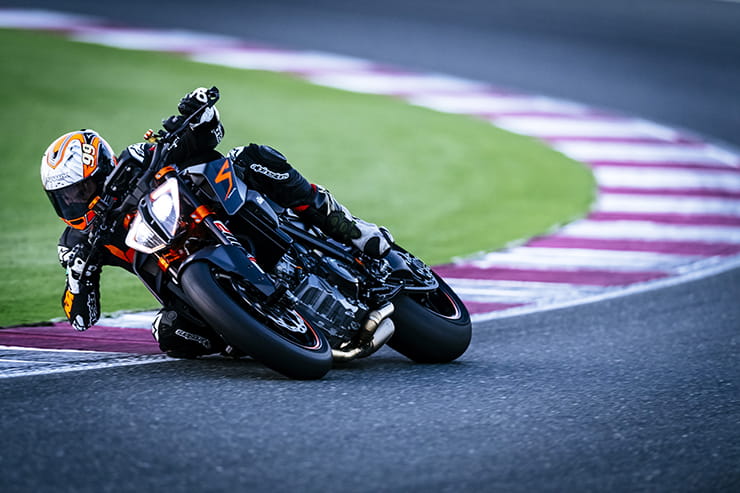 PIC: Jeremy McWilliams gets to grips pretty quickly with the Super Duke R

The Super Duke also made Losail’s twisty bits great fun, and carved through them at a very decent pace. There’s no change to the basic chassis layout, which means there’s still lots of suspension travel by sports bike standards: 125mm up front and 156mm at the rear. But the 48mm WP forks have stiffer springs, and the shock comes as standard with more preload and damping.

The launch bikes had been further stiffened up at both ends for the track, and the front end worked fine. But the shock was initially far too soft for my lanky body, making the bike run slightly wide, squat on exiting turns, and weave coming onto the main straight. Adding preload, low-speed compression and rebound damping made a big improvement, giving a much more taut, accurate steering feel and more stability on the straight.

On the road ride, that generous suspension travel had been welcome, and contributed to the KTM feeling respectably comfortable by super-naked standards. Even those lower bars aren’t too extreme, and although the 1290 has gained a few kilos (mainly Euro 4 related) it’s still light at 195kg dry.

Roadgoing handling was superb, as was the roadholding of Metzeler Racetec K3 tyres that gripped spectacularly well on the track. The addition of cornering ABS was welcome on the dusty Doha streets, too, given the Brembo system’s phenomenal power and the tendency of some motorists to change direction suddenly without warning. 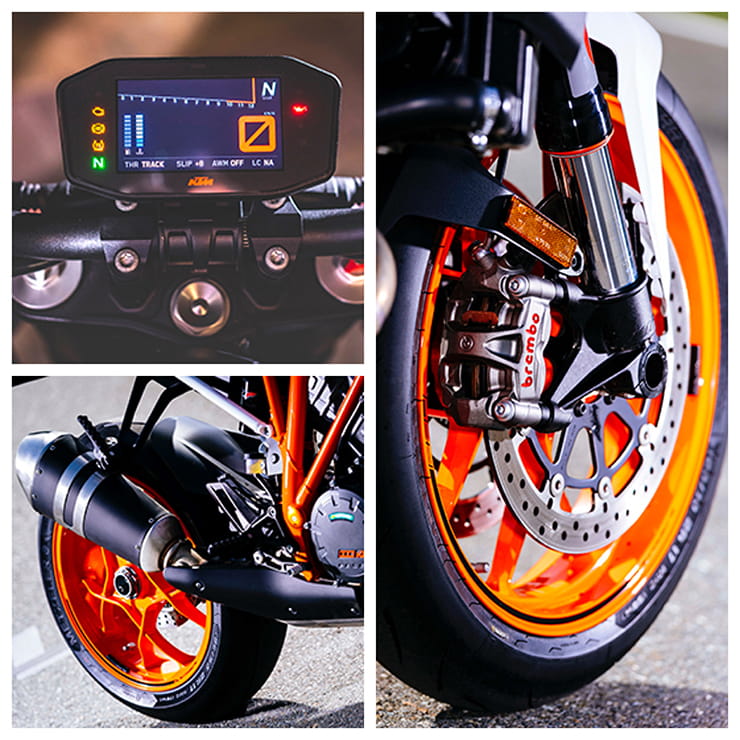 The Super Duke R’s “Beast” nickname is inspired marketing but has always been slightly misleading, not due to any lack of performance but because, unlike its ancestors, the 1290 was as refined as it was rapid.

That’s arguably even more true of Beast 2.0, which has a few more horsepower and a slightly sportier riding position, but whose main gain is arguably an improved electronics package that is more comprehensive and rider-friendly, even if some of the best bits are extras.

This KTM is a classy, neatly detailed piece of design, and in most respects an extreme example of the super-naked breed. With heaps of grunt and zero wind protection it’s made for short blasts and warm days, leaving practicality worries to the Super Duke GT, and makes no apology for that.

On track (where a minority of owners are likely to venture) its torque spread, agility and electronics are big assets. The generous shock travel isn’t ideal if you’re heavy, but comes into its own on the road by contributing to a high level of comfort by super-naked standards. A semi-active option could give the best of both worlds – maybe with the next update…

Meanwhile this thoughtfully updated Super Duke R backs up its even greater performance with an even higher level of safety, which sounds like two steps in the right direction – especially as when the new bike reaches dealers in February, the price will be unchanged at £13,999. (The test bikes were fitted with the optional Track Pack, Performance Pack and Quickshifter Plus that added roughly another grand.)

Highlight of the day at Losail was a blast on a 1290 kitted-out with Performance Parts, including carbon fenders, wavy brake discs, race seat, Dunlop slick tyres and a titanium Akrapovic Evo exhaust that added a few horsepower, shed roughly 10kg and sounded gloriously fruity.

The bike also had a WP road conversion fork cartridge kit, and a competition shock with stiffer-than-standard spring. That helped it feel sharper and tauter than the standard bike, as well as a tad quicker, and highlighted the Super Duke’s considerable track potential. 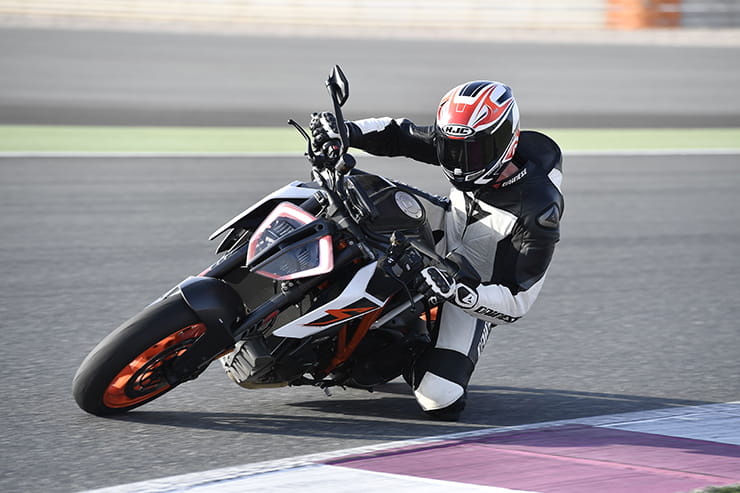 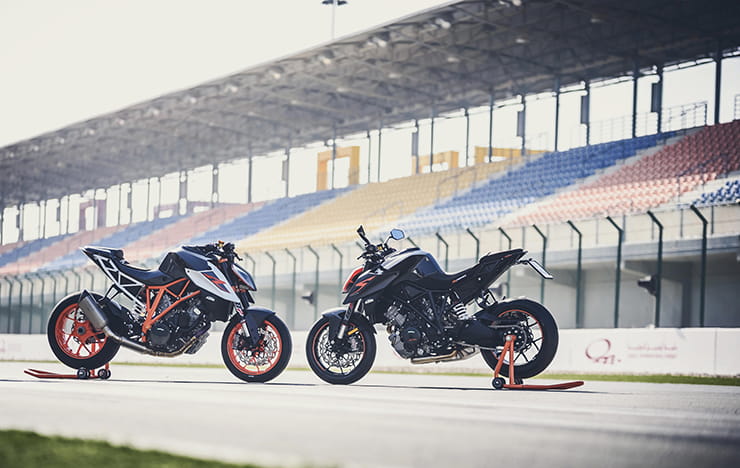