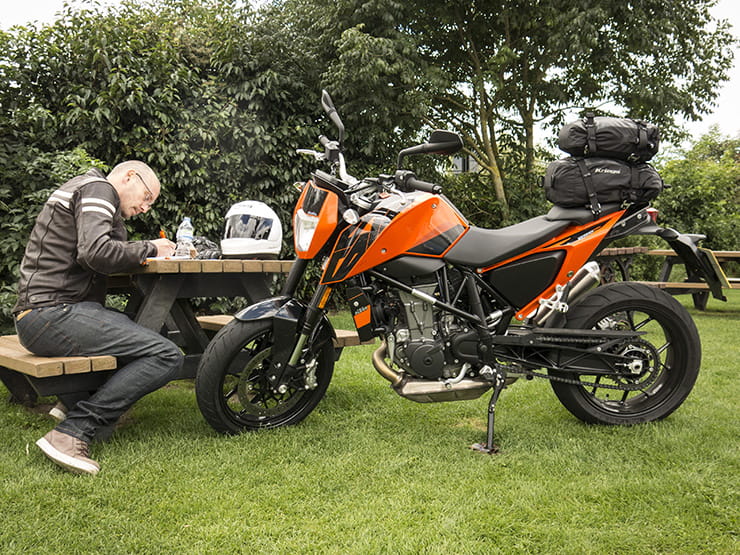 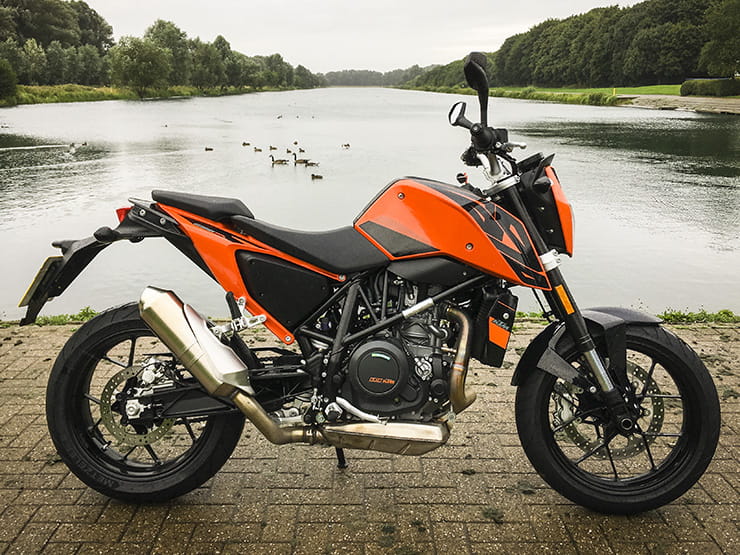 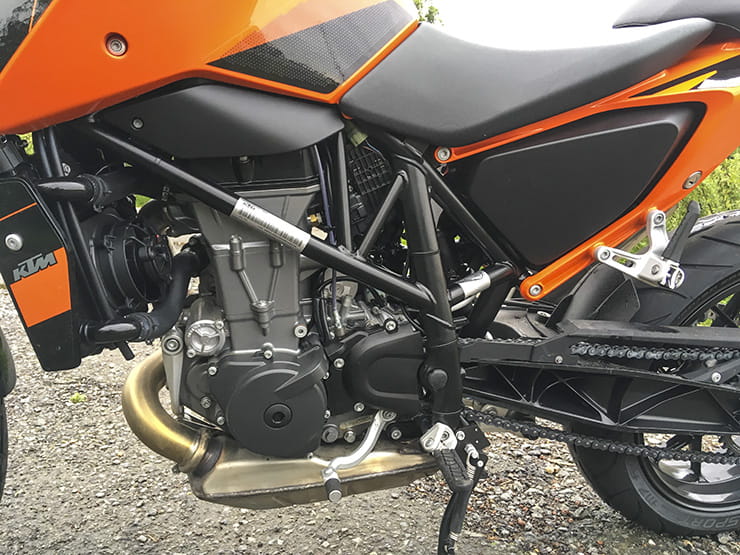 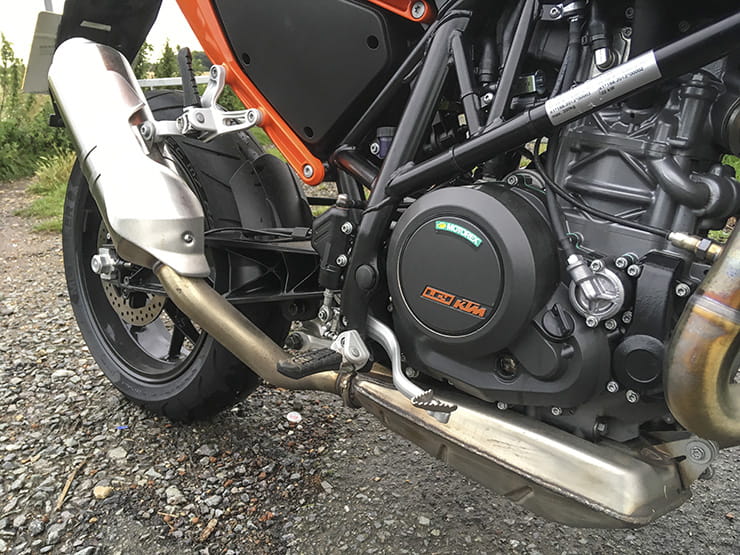 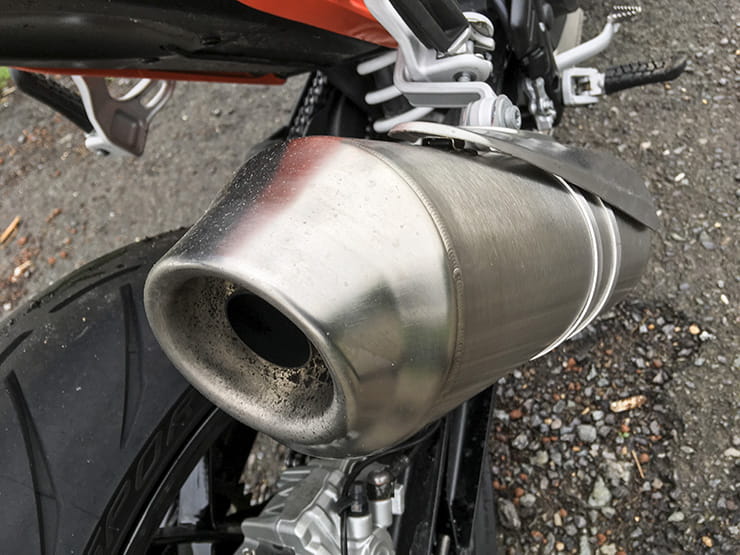 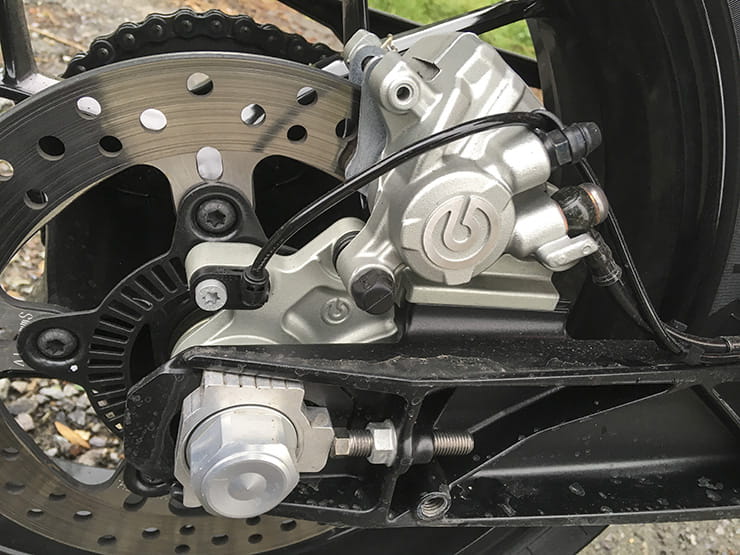 73bhp. Doesn’t sound much in these days of 200bhp hyperbikes, does it? 690cc putting out 44bhp less than the last of the 600cc sportsbikes – Yamaha’s R6. With an apparent hunger for bragging rights, who’s going to pay £7799 for something so low-powered?

Having ridden one, I’d ask who wouldn’t?

I love bikes that squash all their excitement into sub-100mph speeds, and here the 690 excels. It won’t rip your arms off, but the 55lb-ft of torque made by its single-cylinder motor is enough to fire you out of back-road bends in any gear. A straight road will see it left behind by sports tackle, but where’s the fun in straights?

But I’m digressing with specs here; something I’m trying to avoid, because numbers are irrelevant. What really matters is the fact that this thing is small, light, easy to ride, and bloody exciting. 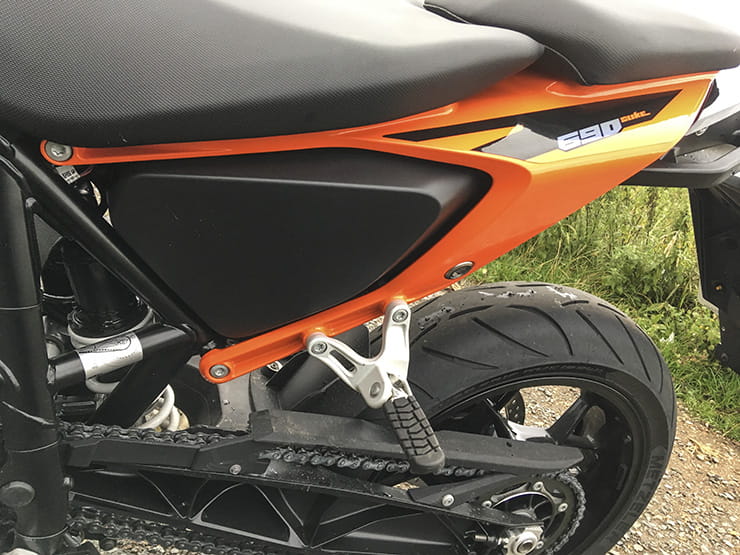 I have a specific test route I – it starts with dangerously bumpy fenland tarmac, softening to tight back roads, then opening up to fast sweepers. It takes in cities, towns and villages, before finishing off with a long stretch of motorway. There aren’t many bikes that prove great on all of this 100mile route, but the 690 came pretty close. To the point that I didn’t want to stop, exploring further afield to get a few more miles in before I had to give it up.

The suspension is typical KTM – WP shock and forks (43mm upside-down in this case) that simply work. Like my own KTM 1050 Adventure, there’s preload adjustment at the back, but nothing else. And like my 1050, it works a treat. I’m 13 stone, and over the violent bumps and lumps of the first section of testing, I found the 690 firm but never uncomfortable or harsh. It didn’t get upset by anything, even the point that once saw me thrown to the wrong side of the road on a Ducati Monster S4. 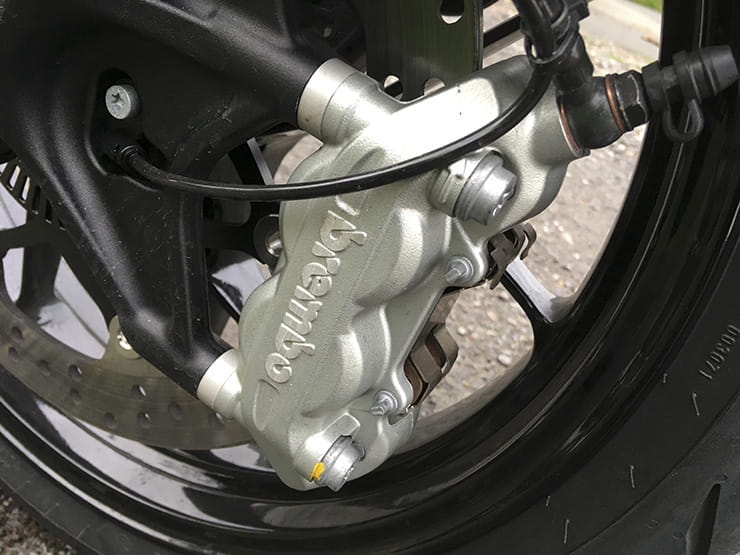 Single Brembo caliper is more than enough for this light machine

As the route opens up, the suspension still feels compliant, not squatting or diving, despite the powerful, but perfectly matched four-piston, radially-mounted Brembo monoblock caliper. One’s all you need on a bike this light, and it results in a firm but unaggressive bite at the lever. In the dry it’s more than powerful enough for the liveliest road riding, but in the wet it’s never intimidating, even before you remember the ABS safety net.

Shod with Metzeler Sportec M7 RRs, the 690 is, dare I say it, a lot of fun in the rain. Riding home through busy city traffic, the narrow machine is easily manoeuvred thanks to the wide bars (though a little shorter would make it slightly easier to squeeze through tighter gaps), and try as I might, I barely got the traction control light to flicker on the sodden roundabouts.

Of course, weather protection isn’t a strong point of this KTM, and I wouldn’t relish the idea of too many motorway miles in the pouring rain. But the wind isn’t too bad. The motor will push you past 100mph quite happily – without this thumper shaking you to pieces – but the sweet spot is really about 80mph on dual carriageways. It takes a while for your neck to start to ache, but it will happen.

The two balancer shafts in the LC4 lump make for a surprisingly smooth ride. Below about 3000rpm, things start to judder; under around 25mph in villages you’ll need to be in first, which can seem a little fast revving until you get used to the nature of the engine. For a single, it’s extremely impressive – characterful, without getting uncomfortable, even right up to the 9000rpm limiter.

This versatility makes its very easy to work your way through the countryside, which is where the 690 really shines. The light, hydraulically actuated slipper-clutch makes aggressive down-shifts smooth, and the well-tuned brakes encourage, shall we say ‘spirited’ riding, if you fancy it. But you don’t have to be riding stupidly fast to enjoy it; in fact I found the high, comfortable riding position to be perfect not just for seeing over cars and bushes for the next overtake, but simply for enjoying the scenery.

Compared to my 1050, luggage capacity is obviously limited. The steep plastic tank was no use for any of my tank bags, and the high exhaust was worryingly close to the bottom of my panniers when I tried them. But without a pillion, I had no problem strapping 30 litres of Kriega luggage to the back. And the under-seat storage is enough for a disc-lock and a few snacks.

I’d think twice before considering a massive camping adventure, but a long-weekend staying in B&Bs to explore the back-roads of the UK and beyond is an attractive proposition. I’d certainly be more comfortable on steep, badly cambered gravel turns with this little machine than I would on my tall, heavy adventure bike, and with KTM's range of PowerParts, there are options for panniers and a tank bag.

The 835mm seat doesn’t sound the lowest, but at 5’11” I was able to easily plant both feet flat on the floor. And it’s not an uncomfortable place to be either – there’s no distracting vibration through the seat, pegs or bars, and my legs were in a very natural position.

Compared to the £9099 KTM 690R, you lose 30mm in seat height, but also 2bhp and, more disappointingly, cornering ABS. Oh, and you gain 1kg. But really, besides the sharper styling of the R-model, I much prefer this lower-priced standard version. 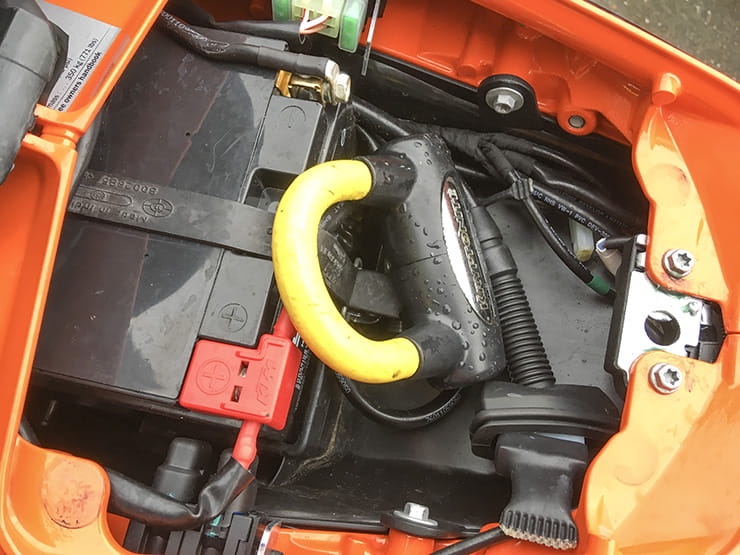 A reasonable amount of space under the pillion seat is welcome

The three drive modes affect only throttle response, not peak power. Sport, Street and Rain get progressively softer, and while I initially preferred the less-snappy Street mode, I ended up using Sport for most of my test. On the wet evening ride, I found Street still more than safe enough, though Rain doesn’t dull things to a boring extent. It’s there if you want it.

The mirrors are great, rarely showing much vibration, though they are quite close to the bars – they can foul your hand if you’re going for a quick wave, but it’s no real problem.

What did annoy me was the colour dash – in the evening it was fine, and in sunlight it’s not always bad, but on an overcast day, reflecting white clouds, I really struggled to read the display.

As standard, it shows revs, speed, gear, engine temperature, fuel level, drive mode, time, air temperature and odometer. This screen can lack contrast in some conditions, but reading the trips – which require a flick of the left switchgear – can mean leaning over to shield the display with your helmet, then looking far too long for the small digits. Tilting the unit back, and adding a small hood would surely have helped here.

I found it a little frustrating that I couldn’t customise the main screen to show trip distance and economy, but the favourites screen is just one click away, and can be set to display any of the options, including range, trip time, economy and more.

In any of the menus, the speed is displayed on the right, but essentials like revs and gear are temporarily lost. When your fuel level’s low, the bottom bar of the pretty accurate gauge turns orange, and a warning appears on screen. Pushing reasonably hard on back roads, I saw 54.5mpg on the clocks. On the motorway it read 66.5mpg, for an overall average of 56.6mpg. The gauge was at the last bar by 110miles – not bad for a 14 litre tank, and I’d used just over 10 litres. By my calculations, I averaged 49mpg, so the KTM might be a little optimistic, but 150miles would be possible from this tank.

Another bone of contention is the gearbox – it's not bad by any stretch, but I thought it was a little clunky at times, and found a few false neutrals during hurried clutchless upshifts. To be fair though, this became less of an issue as I grew more used to the selector's action, and while it's not the slickest ’box, it doesn't spoil the enjoyment of a ride, despite being used so much. 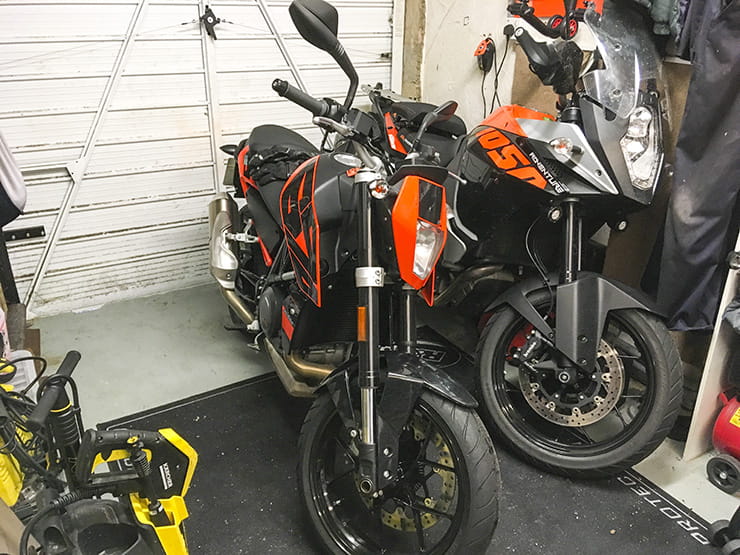 Compared to my own 1050 Adventure, the 690 is a real lightweight

Would I buy one?

I’ve long considered my 1050 Adventure to be my perfect all-rounder – capable of hauling plenty of luggage and my wife, but hugely enjoyable on twisty back roads, if a little large at times. The 690 might not be the load-lugger I sometimes need, but it’s one of the most enjoyable bikes I’ve used for a day of exploring back-roads.

Whether you’re nailing it, out for a more gentle ride to take in the scenery, or commuting through city traffic, the 690 is a brilliantly capable piece of machinery. 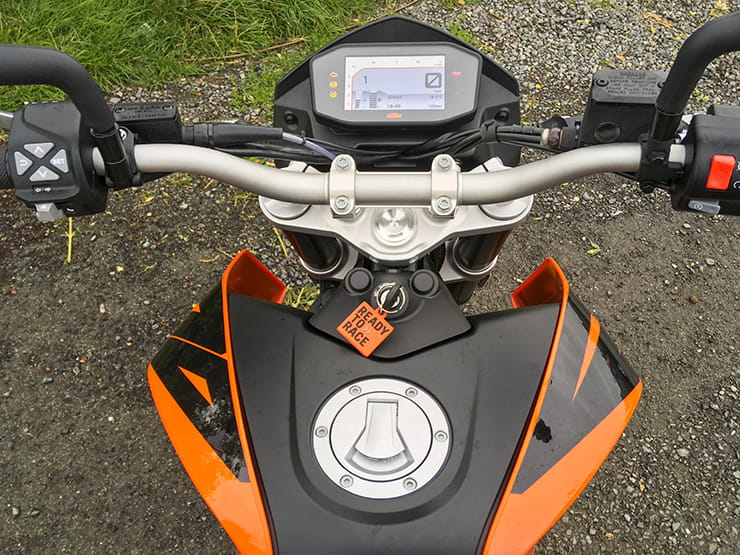