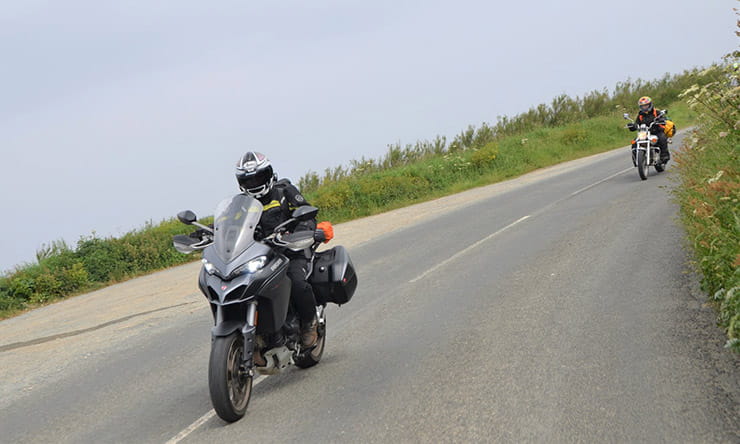 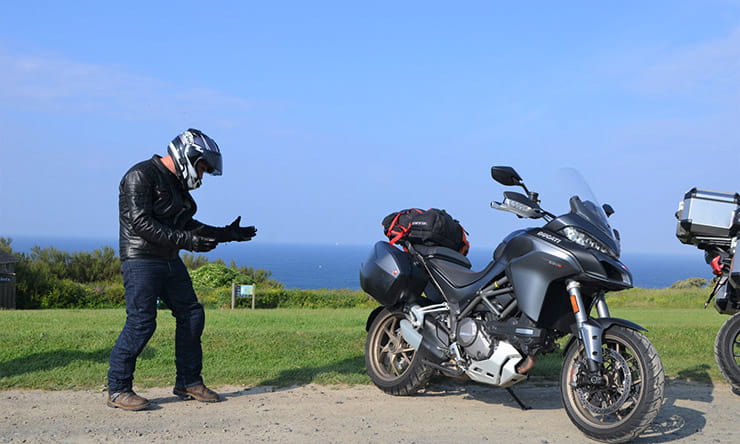 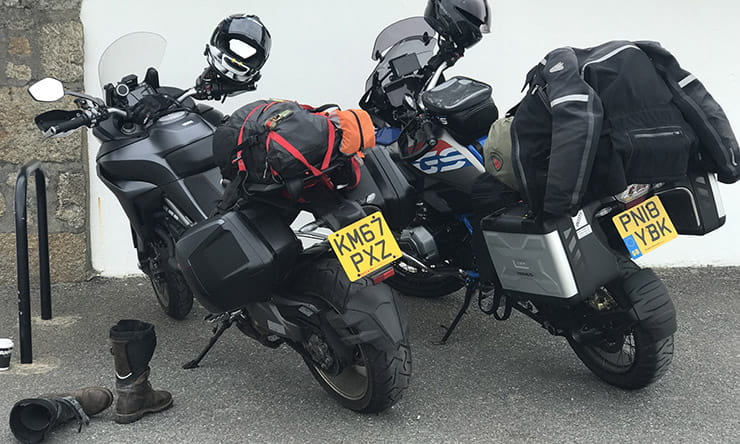 I’ve never done proper touring on a bike before. I’ve been places, sure but never had to carry everything I need on the bike and move from place to place. Normally there’s a comfy hotel with clean sheets, soft towels and a cold beer at the other end.

So when the chance came to join a group of Bennetts insurance customers on a coastal tour of Devon and Cornwall I jumped at the chance, loaded up the Multistrada and hit the M5. 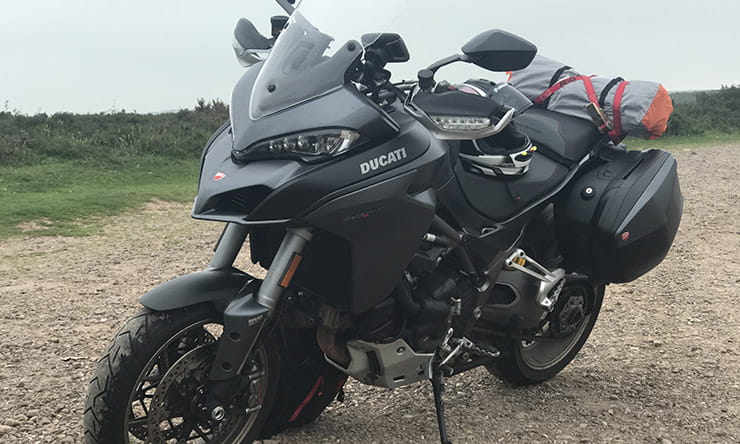 So I knew the Ducati was comfy for three hours in the saddle but hadn’t done a full 12 hour stint on the bike so day one of the Cream Tea and Coastal adventure was the perfect test. Leaving the house at 6am, I took the scenic(ish) route to the M5 through Stratford and Evesham, eventually hitting the motorway at Tewksbury.

At around 8:30am (or an hour and half early) I reached the pretty village of North Curry with nothing to do but wait for the others to arrive. Having completed about 160 miles I felt fresh and ready for the 140 miles we still had to ride that afternoon. Now, 300 miles a day doesn’t seem much but the pace of the ride to our first night camp was relaxed, meaning when we pulled onto the campsite at Tintagel it was 6pm. 12 hours in the saddle was not only the longest I’d ridden the Multistrada for; it’s the longest day of continuous riding I’ve done. And I felt surprisingly good. My right knee was aching but that tends to happen regardless. I think that’s down to lack of use – I don’t use the back brake much when on the open road. My wrists felt tired although weren’t aching. Given the amount of switchback hairpins we’d ridden that day, I was pretty impressed.

The one thing that was aching slightly was my back. I’d been riding wearing my rucksack and while it wasn’t heavy it have put some strain on my shoulders. The next day before leaving the rucksack was strapped tight to the pillion seat with some spare tie-downs I had and the backache was alleviated instantly. 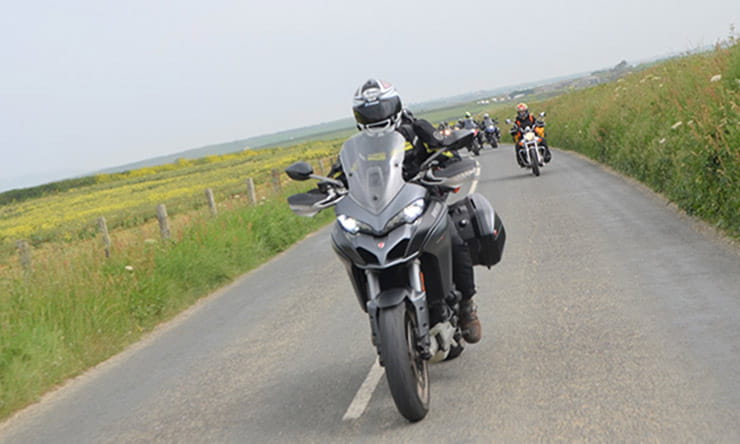 My primary job on the tour was to sweep up at the back of the 11 bike group, making sure nobody got left behind. For this I kept the suspension and engine in Touring mode and enjoyed the compliant, comfortable ride and smooth changes of the Ducati fitted quickshifter.

Given that my job was to stop people getting lost, you can imagine my embarrassment at losing the group after a photo stop! With the rest of the gang looping round Newquay, I (mistakenly) headed straight through the surf capital of the UK and came out the other side. With no answer from Nathan – the group leader – I headed off to Land’s End which was the groups next stop.

Freed from the shackles of being ‘tail gun Charlie’ and not wanting to miss the group at Land’s End, I flicked the bike into sport mode and gunned the Volcanic Grey missile south. After the boring dual-carrigeway part of the A30, the road thins and becomes a sinuous ribbon of gloriously fast tarmac that fires you through wooded valleys and quaint villages that makes it all feel like you’re at the TT.

I arrived at Land’s End sweaty, delirious and babbling to myself about how amazing that road was. Oh, and three hours before the others are due to arrive. 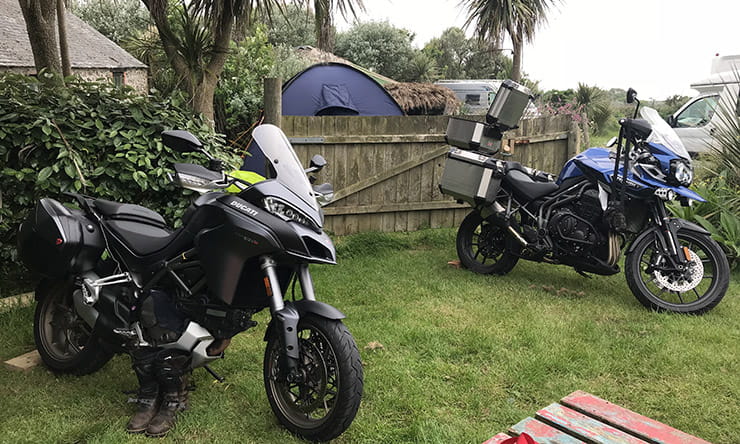 With about 55 litres of pannier space on either side of the bike and my 30-litre Dainese rucksack and tent strapped to the luggage rack; I had all the room one person would need. The panniers are slightly tricky to get stuff in as they’re styled in an aerodynamic fashion and look cool but it does mean you have to pack cleverly. And sometimes re-pack, a couple of times! Boxy panniers from someone like Touratech would carry more stuff but they’d ruin the lines, the fuel economy and the ability to filter. 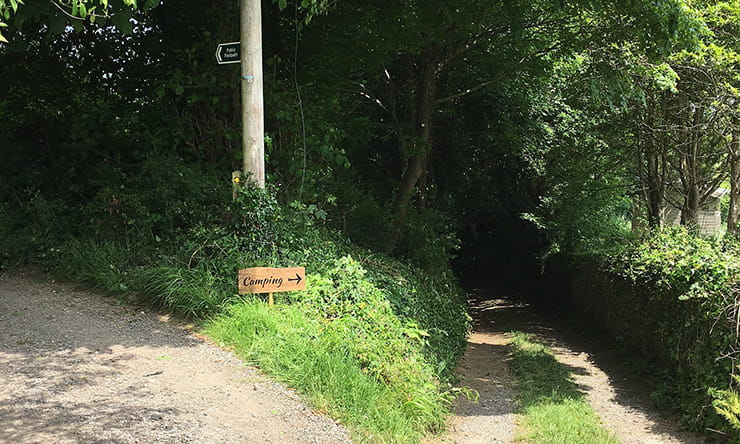 Yes I even managed to stick the bike in Enduro mode as we trundled down the dusty, rock strewn track towards our final night’s camp. Okay, so it may have only been for a mile or so but it does make a genuine difference to the bikes handling. The suspension becomes extremely soft with the power now limited to 100bhp and the ABS to the rear wheel deactivated.

It’s genuinely surprising how stable the bike remains. This terrain is totally out of this intercontinental ballistic missile’s natural habitat but even big daft grabs of the throttle, that send rooster tails of dirt into air do nothing to upset the bike. Even the ergonomics of this fast, comfy, sports tourer work when you stand on the pegs!

And yes I know you’re laughing at my one mile of off-road riding. But that’s more than most GS owners do in a lifetime! 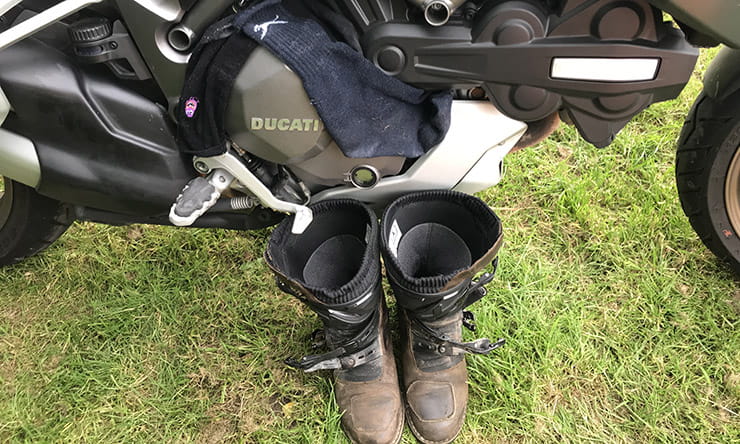 Is the Multistrada the perfect all-rounder?

There are some that will disagree (Bikesocial’s Steve Rose wasn’t won over) but I think it is. The roads covered on the Cream tea and Coastal adventure tick every box, from dirt track to dual-carriageway, hairpin bend to 1:8 climb. It handled it all and never felt like it was struggling. Sure some of the lighter adventure touring bikes would be less tiring to ride on the tight and twisty un-named roads that criss-cross Devon. But you’d soon get fed up of sitting on the rev-limiter at 75mph on the motorway heading home.

In truth; this trip was a warmup for a bigger ride I have planned in July when I’m taking the Multistrada to its spiritual home: World Ducati Week 2018. Now I’m happy that twelve hours in the saddle is do-able, I can’t wait to start hitting the Autoroutes next month! 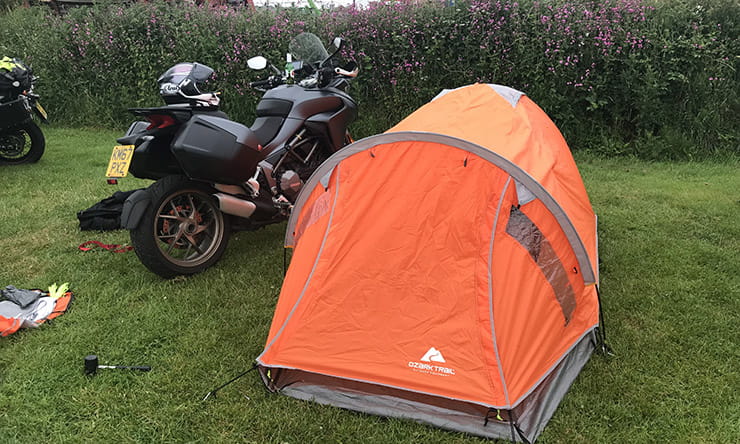