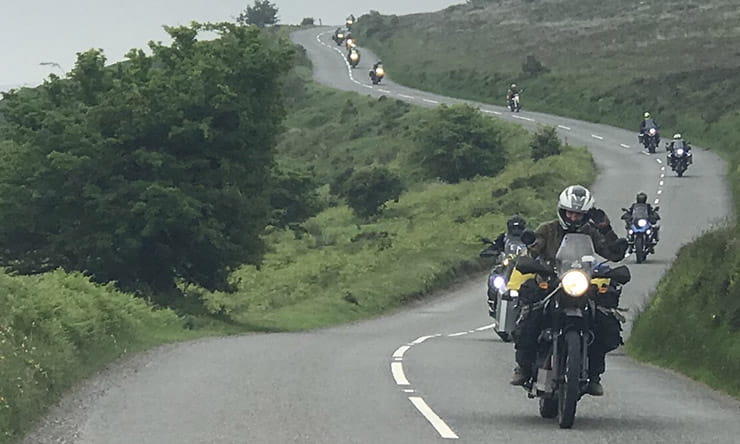 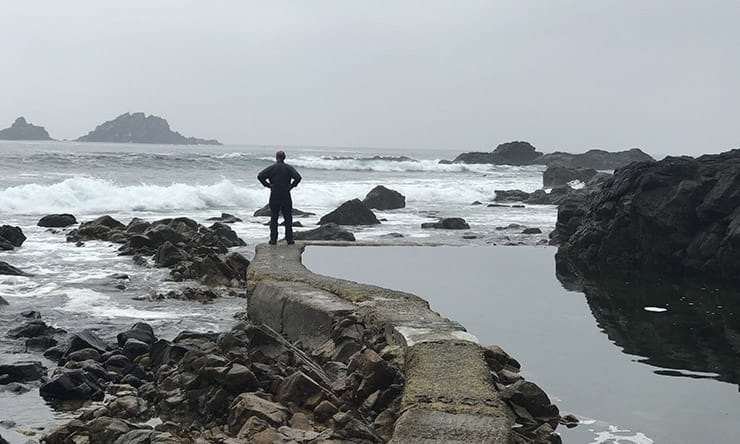 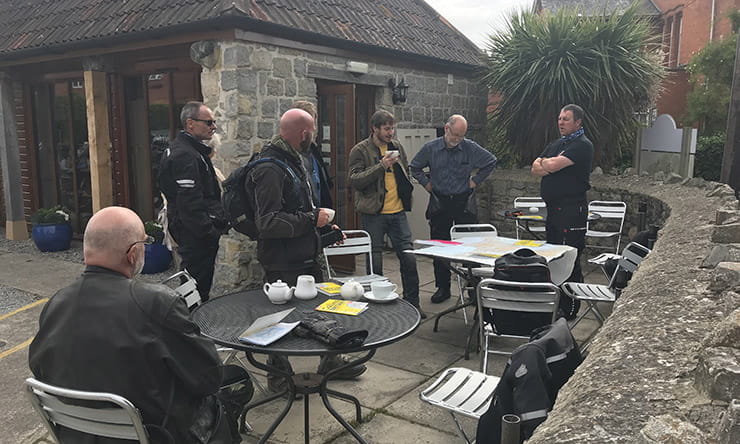 The Cream Tea and Coastal Adventure is a guided tour of Devon and Cornwall which was arranged by Bennetts and renowned motorcycle traveller and BikeSocial contributor Nathan Millward. Bennetts’ customers took part in the Cream Tea and Coastal adventure for just £100 for the four days, which included camping fees and the occasional ice-cream. All those taking part needed to cover was petrol, food, ferry crossings and drinks. It’s designed for any bikes – 400cc or above will be a benefit with some of the steep hills on the route – there was even a 125cc bike that kept pace with the bigger bikes perfectly.

Starting in North Devon and hugging the coast, the tour takes in some of the most scenic roads in the UK and passes though picturesque ports, harbours and estuaries. 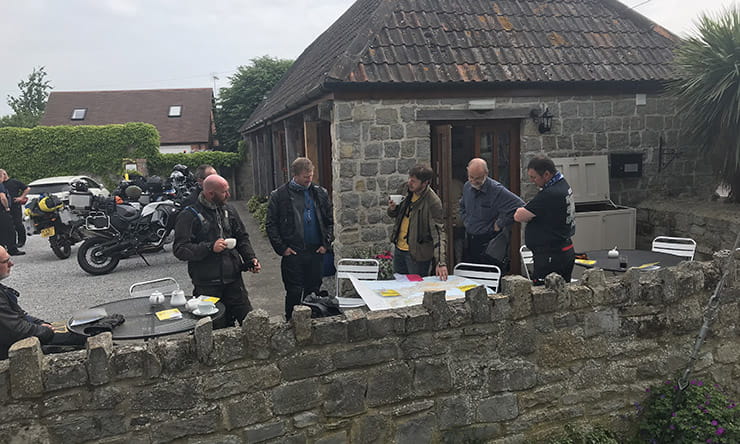 I hate arriving late, especially for a job linked to work. Even by my standards though, sat outside the tea shop we were meeting at, two hours earlier then needed was a little extreme. Never mind the sun was shining and it gave me a chance to re-check my luggage and make sure the straps were tight. About half an hour before the scheduled departure time the bikes started to arrive and the tea, coffee and cake was flowing nicely.

With the group introductions out the way, and the obligatory bike comparisons, Nathan gathered the group to go over the route and let everyone know what to expect.

We have about 140-miles to cover today which, if you wanted to, you’d cover in about four-hours. But we aren’t looking for high average speeds; we have a mixed group of bikes and riders. Today was about taking it easy, stopping often for cups of tea and exploring the towns and villages along the way. 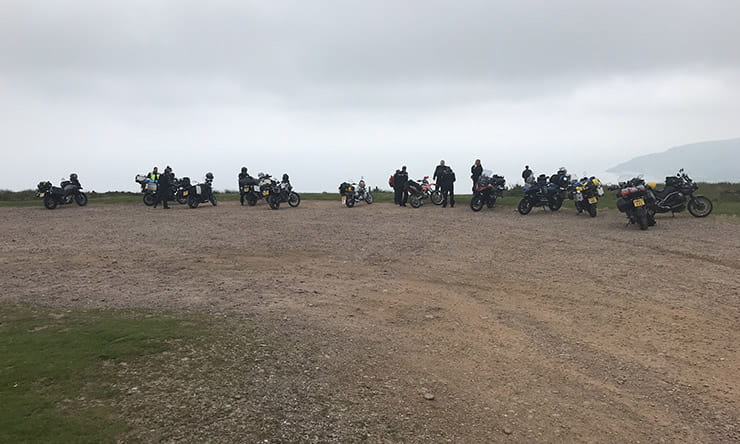 From North Curry we head north picking up the A39 and keep as close to the coast as possible. Passing through Lynton and Lynmouth, – watch out for Porlock Hill – Barnstable. From there we continuing south and hit our first nights camp at Tintagel at about 6pm.

With the first days riding done we pitch camp, select a suitable watering hole and settle in for a couple of hours. A nice thing about the trip is it is whatever you want it to be; fancy a fish and chip shop supper? You got it. Five star fine-dining with your other half? Go for it. As long as you know what time we need to leave, you can pretty much do as you please.

As it is our first night we congregate at the pub and swap touring-tales and talk bikes until the 350-miles I’ve ridden that day catch up with me and it’s off to bed I go. 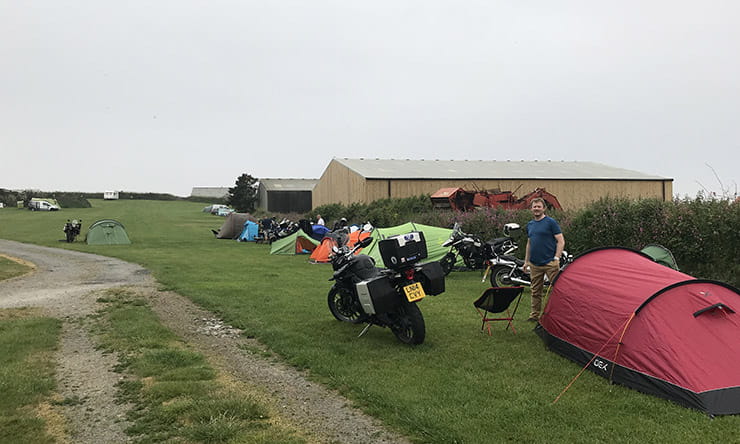 Day two started with a coffee and chat with riders and as we shake off our tents and pack up ready for an 8:30am departure. After about 40-miles we hit the pretty port of Padstow and stop for an hour as people wander off for a pasty or a bacon sandwich.

It’s strange how quickly a group bonds in this situation, I can’t think of any other time when I’ve met a group of 13 people and got along with all of them after such a short amount of time. The people whose names you were struggling to remember yesterday morning now seem like old friends you’ve been riding with for years  – is this the ‘motorcycle effect’?

After an hour of wandering and window shopping our rag-tag selection of bikes head back up though the town and pick up the coast road as we head for Land’s End. 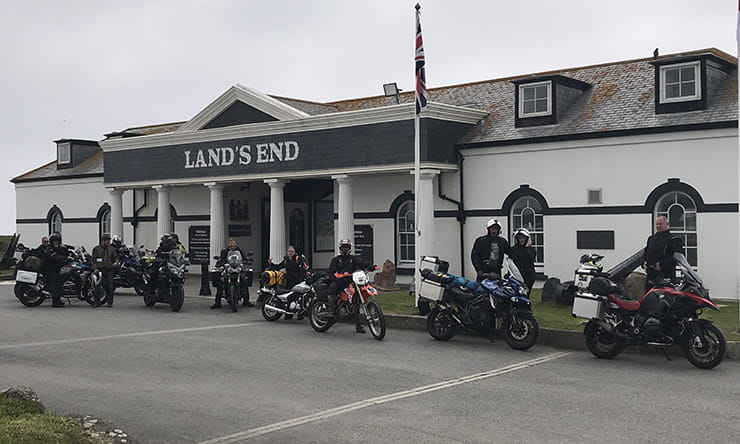 Stopping off along the way for more tea, scones and ice-creams, we arrive at the Land’s End visitor centre at about 4:30pm. After a quick photo stop and leg stretch the group head off again for our campsite, Henry’s on Lizard point. It’s a nice touch as it means we have taken in the most westerly point in mainland UK and now the most southerly point too. Add to that the fact we are riding some of the nicest – and quietest – roads in the UK and you have another truly memorable day on the bike.

Arriving at the campsite in the late afternoon the weather is perfect; bright, sunny and warm enough for t-shirt, shorts and sandals as we head to the campsites fire-pit for some locally made scrumpy and fish and chips. 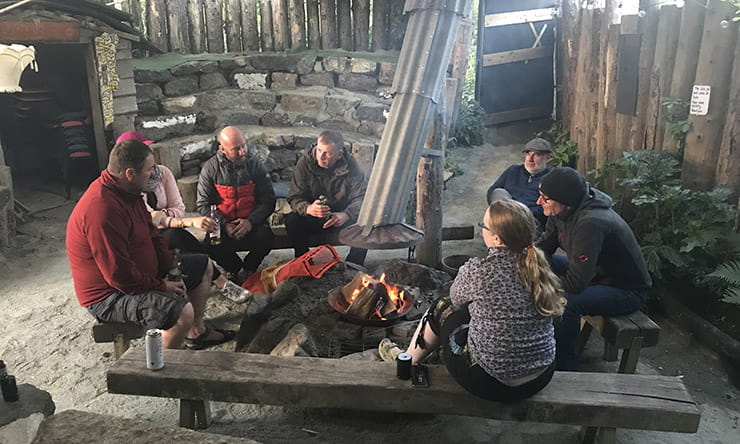 Day three begins with the now obligatory coffee and group chat as the late risers in the group finish packing. The atmosphere is still good, everyone is relaxed and nobody feels rushed to keep to any schedule. As long as we depart before 9:00am, we’re on track. The banter between the members of the group is still going strong and friendships are beginning to forge. 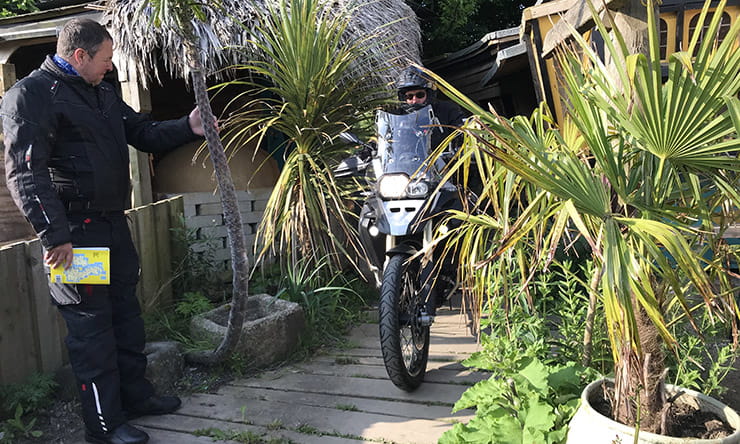 After riding the bikes out of Henry’s – that photo above isn’t the jungle, that’s the campsite! – we head north east through Gweek and onto Falmouth for ferry crossing number one of the day. The crossing of the river Fal is over in about ten minutes and then we ride on to the stunning seaside town of St Mawes.

With the bikes parked up we all grab a coffee and snack as the holiday makers and locals wander past talking tales of bikes they used to own and wish they still had.

There’s something about seeing a big group of bikes that makes non-riders really inquisitive. Whether it’s the misconception that we are all tattooed blokes with gravelly voices or that they secretly long for the feeling that only comes from riding in formation, I can’t say. What I can say if that this bunch of bikes (we had tourers, adventure bikes big and small, an enduro bike and 125cc cruiser) grab attention and admiring glances everywhere we go. 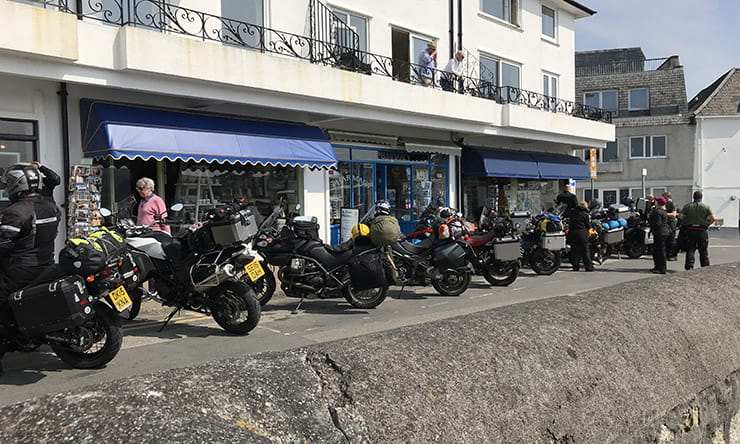 From St Mawes we head east and rolling into the port of Polperro at about 2pm. The group disperses into the town to search out some food and souvenirs for friends and family. I head back to the bike slightly earlier than everyone else; low phone battery meant utilising the USB port under the seat of my Multistrada 1260s. Just as I’m re-tightening the straps, the group starts to filter back refuelled and refreshed by a couple of hours in this stunning location.

Skirting around Plymouth we then hit some extremely narrow lanes around Kingsbridge as we track down our final nights campsite. With Enduro mode selected – the roads were just about tricky enough to warrant its use! – the bikes power was limited to 100bhp but the back brake’s ABS was now disabled. The suspension in Enduro mode is extremely soft and compliant making it very comfy but slightly wallowing as we ride down the rocky path to the campsite.

As it’s the final night the group go all out for a posh dinner at The Cricket Inn on Beesands. As a final night destination it’s perfect; excellent food, good beers and picnic benches overlooking the crystal clear waters. 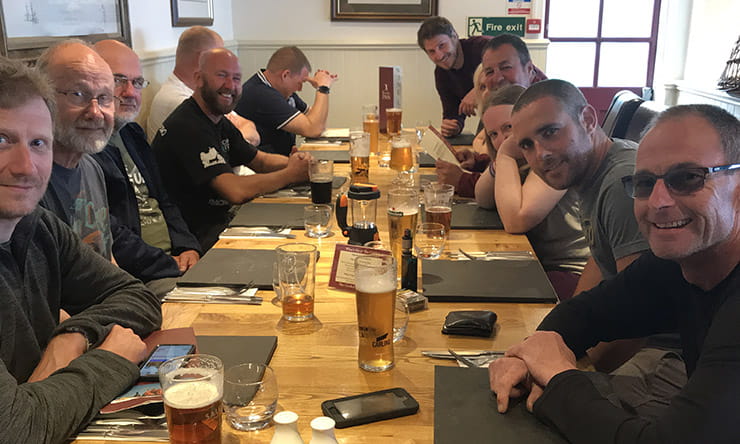 Day four: Kingsbridge to Exeter and then home

The final group coffee has a sombre feeling to it; with two of the group leaving ahead of us to meet some friends further up the coast, it feels like the start of the end of a memorable tour. We saddle up and leave the campsite around 8:30am and head off a again along the tight and twisty roads that spread across the area like a web.

With most of the group needing to pick up the M5, we head north and regroup just outside Exeter for some final goodbyes. Email addresses get swapped and Facebook friend requests are sent. A final wave and they it’s onto the motorway for the 200-mile slog back to Coventry.

What the riders say

How long have you been riding? One year and three months

Absolutely loved it. The pace was done well, the roads were fun and a challenge in a good way for my little bike.

A little bit more time to explore the villages rather than tea stops. Certainly inspired me to go back down and visit some places we went by.

How long have you been riding? Back riding seriously for 7 months, after a 20 year gap.

Really enjoyed the tour. Having not done anything like that before and riding in a large group was memorable. I’ve met some awesome people and made new friends. I’d recommend it to anybody.

Wouldn’t have changed anything.

How long have you been riding? 7-years

I really enjoyed the cream tea coastal adventure was a great opportunity to meet 12 other strangers with different bikes and backgrounds and was just an excellent way to make some great memories with 12 great bikers.

No wouldn’t change a thing. 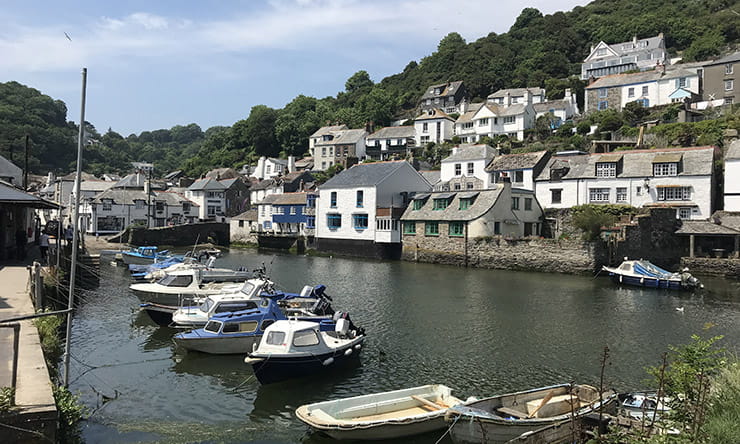 As this was my first tour with a group I really didn’t know what to expect, the fact I was spending four days with a group of customers did make me slightly pensive. By the end of day one though, these people weren’t customers anymore, they were mates. Very quickly the group began to mesh and we were all there together, looking out for each other, warning of hazards and waiting at junctions.

Whether you’re a life-long motorcycle adventurer or looking to dip your toe and don’t know where to start, a guided tour such as this is the perfect way to spend four days. The schedule is relaxed and with between 120 and 150 miles a day, the riding is comfortably paced and enjoyable.

Bennetts’ customers can take part in the Cream Tea and Coastal adventure for just £100 for the four days, which includes camping fees and the occasional ice-cream. And that makes it fantastic value for money. As tour leader, Nathan, has already ran the route to seek out the best roads and campsites; all you need to know is where you’re ending up and should you want to, you can head off on your own. This flexibility means the more experienced in the group can make the day up as they go along, and those that wish to, can stay with the group. Personally, I like the group riding and only deviated from the back of the group after some dubious map reading left me out on my own after a photo stop – I don’t think I’m going to live that down…

To say I enjoyed the tour is an understatement; it really was a very enjoyable few days spent with proper enthusiasts, riding some beautiful roads. I just need to find out when the next one is now to get it booked.

Nathan and Bennetts are working closely to organise another customer tour for either the end of this year or the beginning of next. When this has been finalised, we'll be in touch.