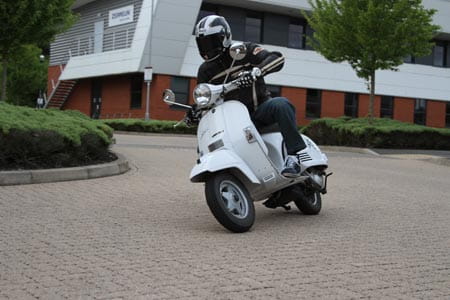 Surely a traditional looking scooter like this one will be two-stroke and have a hand gear change? Well actually no, because this is the new LML Star 125 Automatica, a four-stroke machine with classic styling and fuss-free auto transmission.

LML are based in India and started building Vespa scooters under licence for the Indian market many years ago, but these days the company produce PTW’s for themselves. They’ve recently appointed multi-brand importer, MotoGB to take over UK distribution. 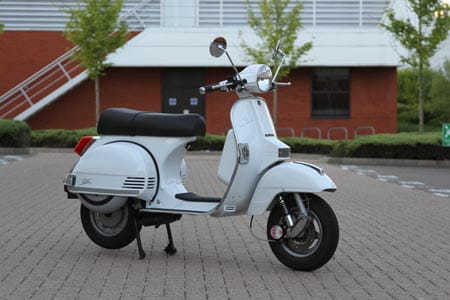 Sitting alongside traditional two-stroke manual scooters and their four-stroke Vespa PX lookalike is this all-new automatic LML star. Being auto is nothing ground-breaking but an auto engine in a traditional shaped chassis is and it’s something Piaggio, the company behind Vespa are probably kicking themselves over.

As a lifelong Vespa rider myself it seems odd to sit on a scooter that looks and feels like a PX but has a rear brake lever where the clutch should be, there’s also no twistgrip to change gears (because there are none) and the floor mounted rear brake pedal has disappeared, along with unnecessary holes in the runner boards and frame. It all seems a bit weird to an aficionado but the ‘normal’ folk will feel instantly at home.

Start the scooter up on the button and it fires up after a few seconds, take it off the centre stand (much easier to get off the stand than back on it but the factory are working on a fix), twist the throttle and it pulls away quite cleanly. It feels just like my own PX when you’re sat on it but the LML hasn’t got that characteristic two-stroke charm and character, it does go quite well though and aside from the brakes and engine it feels just like a PX (or in this case LML Star) should.

However it does still retain that flighty 10” wheel handling, it’s something you soon get used to though so don’t let that put you off. The auto engine is air-cooled and four-stroke so should be easy to maintain, reliable and quite economical too, LML claim 46km/l but we’ve not had chance to verify it yet. The LML has a top speed of 61mph according to my GPS, which isn’t too bad and compares quite well with similar spec models; it’ll let you keep up with traffic easily enough, which is always a bonus.

Unlike most conventional auto scooters this one doesn’t have storage space beneath the seat, that area is taken up by the vertical engine and 8-litre fuel tank, there is a lockable glovebox up front though. On a two-stroke it’s usually packed with bottles of oil, measuring jug and tools but on a modern four-stroke you shouldn’t need any of those items. Stick your sandwiches in there instead and maybe an inner tube and pump because unlike the PX there is no spare wheel on this scooter, a shame really.

Build quality is fairly good on the LML, maybe not quite as well finished beneath the panels as its nemesis but the LML is considerably cheaper than the Italian steed, in fact it’s £571 cheaper than a PX 125 and £671 cheaper than the 3-valve Vespa LX 125. Our advice, if you want a Vespa then buy Italian, if you’re looking for a cheaper alternative with the same retro styling an LML will do the job but maybe not with the same level of kudos.

+ Points: Styling, ease of use, price

- Points: Hard to get on the stand, not too pretty under the panels