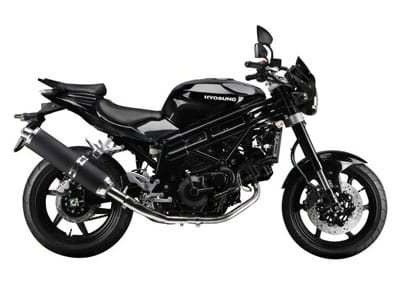 Hyosung is a Korean company who specialise in producing parts for various bike manufacturers but have a particularly good relationship with Suzuki. And this is why the naked GT650 comet bears more than a passing resemblance to the original Suzuki SV650. But looks are where it ends because there’s nothing much that is interchangeable with the Suzuki.

The Comet’s engine is based on the SV650’s middleweight twin with a slight difference in bore and stroke. It’s a pleasurable little engine but prone to vibration at the upper reaches of the tachometer. And the original bike’s gear lever is suited to size 4 feet. But it’s gutsy enough to be likable and usable for anyone buying into the 650cc class. Think of it as a genuine stepping stone to bigger and better things. Saying that, many owners retain their Comets as a second, go-to-work bike.

Introduced as a cheap alternative, Hyosung came unstuck to start with because the bike’s price wasn’t hugely different to the Suzuki SV or the competition. However, today’s versions aren’t much more expensive.

There are areas open to improvement, for example the rear shock is preload adjustment only and harsh with it. The forks are similar in feel but have adjustment. Overall the ride quality can be lived with and is made better for the neutral feel of the bike – it doesn’t give the same feel of a loose front end the SV650 has when cranked over. The exhaust looks like it was made in two minutes flat due to its basic non-hugging shape and does the rest of the bike’s styling a total injustice.

As an average, honest bike the Hyosung is right up there with Suzuki’s SV but doesn’t quite capture the ‘look what I’ve bought’ feeling of owning a new Japanese or European bike. If you’re a badge snob then the Hyosung won’t blip your radar. Folks who want a bargain of the second-hand variety could do a helluva lot worse than buying a GT650 Comet. And the sportier, fully-faired GT650R from 2006 is even better value, new or second-hand.

+ points – good all-round ability. Cheap and cheerful is a more accurate way of saying value for money. Claimed to be 8bhp more powerful than an original SV650