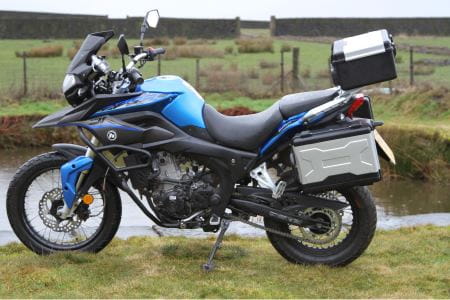 New bike registrations aren’t exactly booming but certain classes are selling well, like the touring, adventure, trail and 126-650cc classes. In fact the adventure class has boomed ever since Charley and Ewan set off on their well televised travels.

BMW and Triumph have both done well out of this adventure bike boom but they’ve overlooked a very lucrative area. Like many things, once somebody comes up with an idea you realise just how simple it is and these huge manufacturers have missed what could well be the next big thing in motorcycling. They’ve (so far at least) neglected the emerging 250cc class, a class that many new and returning riders might well want to get in to…on a mini adventure bike. Now a Chinese manufacturer has beaten the ‘big boys’ at their own game, let me introduce Honley and the RX3, an A2 class 250cc mini adventure bike with rugged good looks.

First things first, it may be of Chinese origin (built in the Zongshen factory) but the Honley RX3 is tastier than a number 36 from our local take away. First impressions count for a lot and you can’t argue with the fact that this quarter litre machine looks the part. It’s got that scaled down GS styling well and truly sorted. It’s quite well spec’d as well, with a fuel injected six speed, liquid cooled engine, upside down forks, LED lighting and 3D fish-eye headlamp, Siemens multi function digital dash (fuel gauge, time, trip, odometer and gear position indicator), stainless exhaust, USD forks and an adjustable rear mono shock. It also comes with three-piece hard luggage, engine bars and pannier protectors – all as standard equipment and for an attractive price of just £3699 on the road. Ok the panniers and top box aren’t huge but they are still useful and will help your average commuter to carry his sandwiches.

The bike looks as good in real life as it does in the photos and it feels like a bigger bike than it actually is (great for road presence). Thankfully though the seat height has been kept down to 795mm so it is accessible for most riders and novices needn’t be afraid. Our test bike had just arrived at the Importers (Earnshaws Motorcycles, Huddersfield) and it’d only done a few miles so wasn’t even run in. It fired up easily though and the single cylinder engine rumbles away nicely through the stainless steel pipe. Once aboard everything feels just like you’d expect, wide bars, a comfortable seating position, decent mirrors and all the controls are where they should be. It certainly doesn’t feel like many of the cheaper Chinese bikes I’ve ridden, everything has been finished very well and the bike could easily wear a mainstream badge on the tank. Chinese quality control has come on massively in the last couple of years and will only get better. 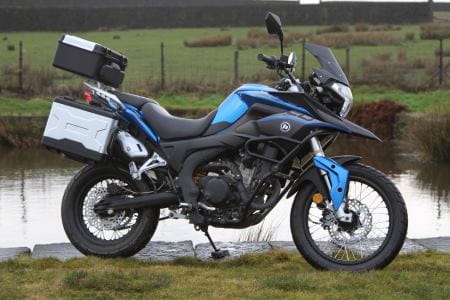 The bike pulls away well and despite only having just less than 25bhp to play with it accelerates quickly enough and can easily cope on faster roads, there was more than enough torque to pull up the steep hills around Huddersfield as well. I saw just over 80mph on the LCD clock but it’s a new engine, so expect it to loosen up a bit with a few more adventures under its wheels. The engine will rev to the 9,000rpm redline and although there’s a bit of characteristic single cylinder vibration it’s nothing to worry about. The suspension was pretty good too, the upside down forks may not be adjustable but they felt well damped, as did the rear shock so no complaints there. I managed to get the bike off road, through some deep puddles and along muddy farm tracks and it coped admirably so the bike is good for a bit of mild off roading and is much lighter to pick up when the inevitable happens (not that it did, thankfully). According to the spec sheet the wiring loom has been waterproofed as well so it would probably make a good alternative green laner if you stick some knobblies on it. Talking of tyres, our test bike was fitted with a pair of CS Hi-Max tyres (no we’ve never heard of them either) but during our wet day in the saddle they actually performed very well, only losing grip if I wanted them to whilst testing the brakes. The RX3 has discs at both ends and they were powerful enough; plenty of bite and a nice feel at the lever so no complaints there. In fact the only things I could criticise were that at times the fuelling felt lumpy and the bike would cut out occasionally at a standstill. This bike was actually a pre production model though and it was quite a cold damp day but it seemed like a glitch in the fuel injection system to me, or maybe a case of the factory trying to beat the emissions test? A revised map should cure that problem quite easily though and the importer is on the case. The other niggle was that I found it quite hard to get the bike into neutral, nothing too major though and it’s more down to getting used to it than anything else really.

If you’re not looking to conquer the world but want a mini sized adventure, or a great looking commuter bike, the Honley RX3 is well worth slinging a leg over. Aside from the fuelling glitch it’s a bike you’ll enjoy riding to work all year round and you can take it out to for a dirty weekend too.