We took two of the latest street fighting powerhouses from Ducati and Triumph and put them head-to-head to find out if price, power and capacity are the only differences between the 1198cc Ducati Monster 1200R and the 1050cc Triumph Speed Triple R.

If it were a boxing match, then the tale of the tape would suggest a reasonably fair match; the most significant difference is the Ducati, with its squashed nose and a 160bhp twin-cylinder lump powering it ahead the 138bhp triple of the Triumph.

Looking at the spec sheets of these two brutes and so much of them are similar if not the same including components, dimensions, comfort, and ultimately, target audience. The stand-out differences are that 22bhp advantage for the Ducati at a cost of £3750 beacuse the Triumph is priced at £11,500 while the Ducati's RRP is £15,250. Ouch. Oh, and that’s for the red one. If you wanted black that’s an extra £200. But Ducati R models have never been cheap and traditionally they hold their money well. 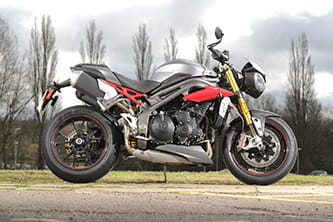 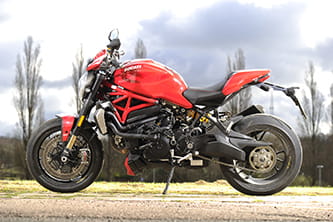 Both Ducati and Triumph have significantly updated their powerful top-of-the-range nakeds for 2016 with a raft of improvements including power and torque increases and amendments to improve steering and agility.

This British Beef v. Italian Stallion is a match-up we’ve been eager to bring you since the Triumph was formerly announced back in November 2015. This was right after the press launch of Ducati’s new Monster.

We were expecting much more power from the new Speed Triple when the power figures were confirmed, but the men from Hinckley told us they preferred to concentrate on style, technology and rideability instead of out-and-out power.

This trend that has continued with the other new 2016 Triumph models including Street Twin and Thruxton R.

‘R’ of course refers to the designation reserved for machines with race pedigree or at least that are race inspired, those that use the finest brakes, suspension and tyres and in this naked bike case combine the practicality of a naked sports bike with stomach clenching performance.

The Ducati has a revised version of the super strong 1200cc Testastretta 11° Dual Spark twin-cylinder engine. Its redesigned twin silencers and more oval exhaust pipes have a wider diameter with new throttle bodies all helping to boost efficiency and increased compression ratio. Overall boosting performance by 15bhp, up to 160bhp, over the Monster 1200 ‘S’ model. Torque is up too, from 92 to 97 ft-lb and it’s the monstrous mid-range power and ferocious acceleration where the muscular v-twin Italian lives up to its name. 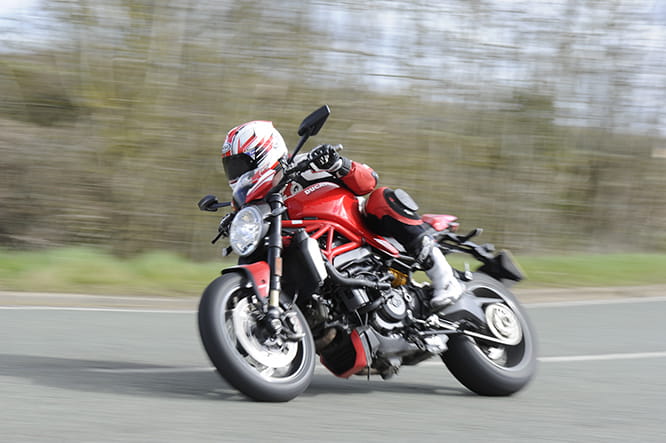 Over in the grey corner, the 1050cc in-line triple Triumph creates a more pitchy song from its underseat twin exhausts that is almost poetic compared to raucous battering emanating from the hideous but Euro 4 compliant over-and-under side exhausts of the Ducati.

Some people prefer R ‘n B, others are more classical lovers but it doesn’t make either one genre better than the other. In the same comparable way, these two bikes are both aweseom to listen to in their own unmistakeable way, despite the difference in noise.

On the Ducati options list is a set of Termignoni pipes which will not only save some weight, they'll look far better than the standard versions. They would be our choice.

Triumph’s 2016 upgrades for the Speed Triple have been focused on cosmetics and engine with 104 new developments in its powerplant making it more responsive and rider-friendly than the outgoing model. And more powerful…marginally. Thanks to these updates and the ride-by-wire throttle, the engine is certainly smoother both in delivery and its reactiveness than the previous model. A change noted by the three members of the Bike Social team who rode it. 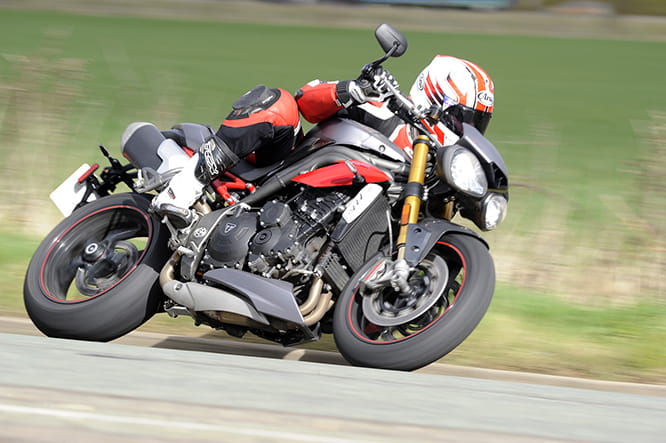 So let's have a look at how they match up, head-to-head:

How do they feel to ride? They’re both terrific motorcycles; finely engineered, potent, powerful, agile and they pack one hell of a punch. During realistic everyday riding you’d not want for more in terms of their power.

The Ducati’s bhp advantage is certainly noticeable in the mid-range. Throttle reaction on both is sharp and instant without being over sensitive, a good job too with the ‘R’ designation. The biggest difference in this round is where you can pin the throttle on the Triumph and know it isn’t going to kill you, try it on the red Italian and you’re never quite sure.

Each bike has the ability to soften its power deliver by use of riding modes; the Triumph comes with four pre-set modes (Rain, Road, Sport and Track) as well as an editable 'Rider' mode. The Ducati sticks with the familiar Urban, Touring and Sport. ABS and Traction control can be configured in each mode. Both bikes can change modes on the fly which is a useful tool that other bikes don’t permit. On the Ducati I’d say the throttle is a little more aggressive and the clutch has a closer bite point so you’re suddenly away. It also has a monstrous, brutal mid range in first gear as well, even in Touring mode.

The Triumph is the smoother of the two, they both sound like fighters should although this round goes to the Ducati because of its 22bhp advantage. 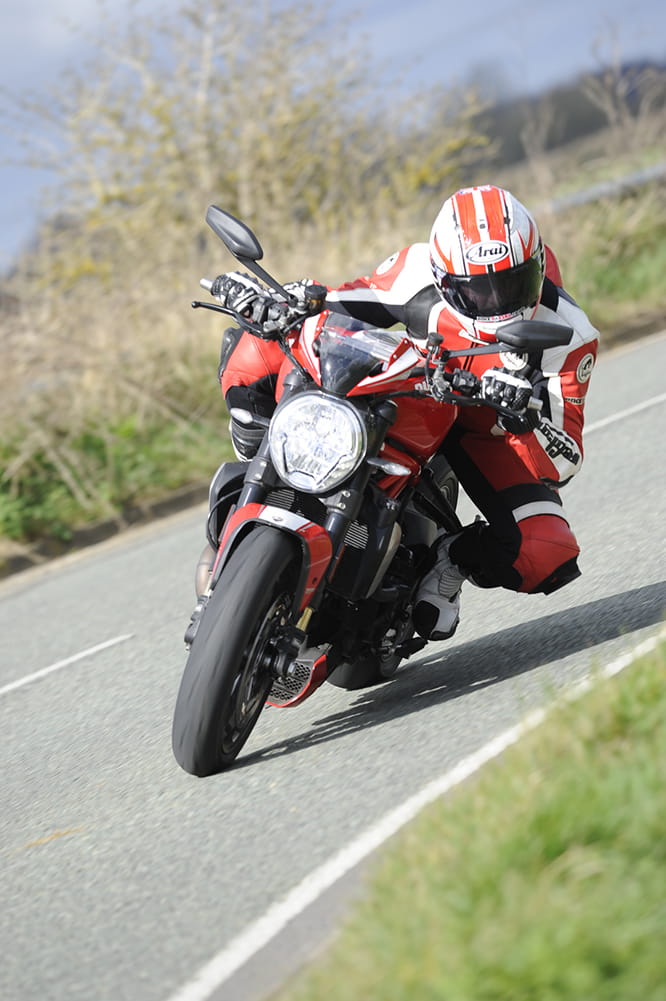 On the face of it the two bikes are equipped with Ohlins suspension and Pirelli Supercorsa tyres so are expected to be decent around the bends.

However, the big winner is the Ducati, primarily because it steers quicker, feels more lively and has a steering damper which calms it down under power does make a difference. Delve a little deeper and it also has light alloy, forged wheels as opposed to the Triumph’s cast versions contributing to the 5kg lighter weight of the 1200R. The lighter wheels make it a little quicker to turn.

The higher exhausts on the Triumph mean the weight is higher-up but the ride is more comfortable on the Speed Triple R and it would be the bike I’d want for covering big miles in one trip.

The Ducati is slightly taller; 80mm in overall height but only 5mm seat height, giving it more ground clearance. It also feels as though you sit in the Ducati as opposed to on the Triumph. Both bikes are comfortable, have a decent riding position, are very agile and highly capable machines but I think the Ducati edges it in this round because of the steering damper. 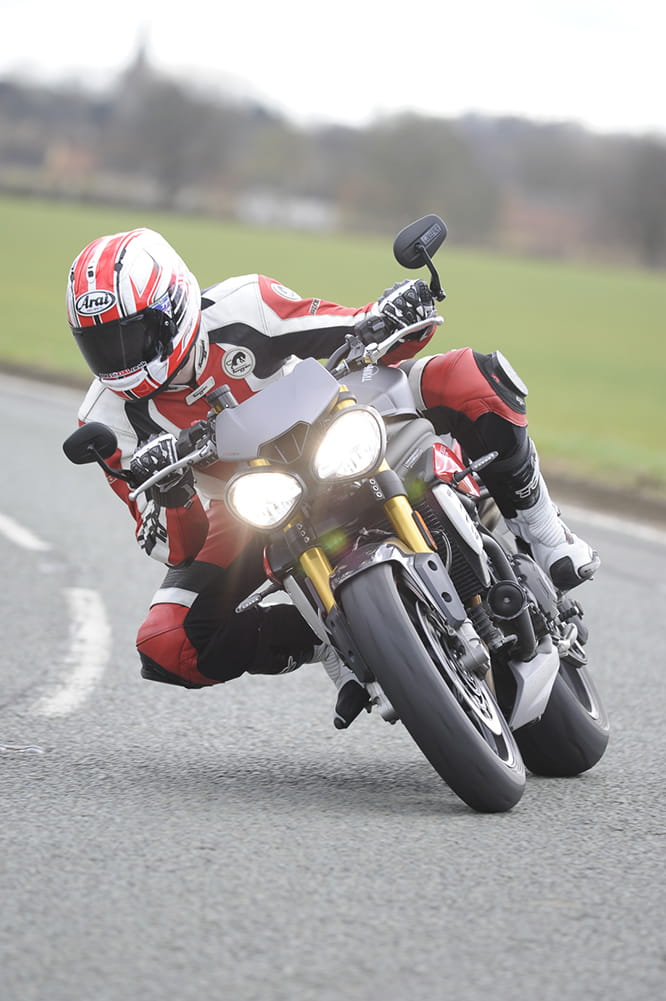 How do they look? Well, they’re bruisers with a hard man stance, almost hunched shoulders looking like they’re going to be in a fight so neither is going to win any beauty pageants. It's not why these bikes exist. The Ducati headlight styling makes it look like its had a punch on the nose already, while the Triumph reminds me of a Transformer.

The exhaust system on both can’t be what the designers dreamt of but unfortunately Euro 4 regulations mean there’s no way around the pipes being an eye-sore. The only other annoyance of note is the heel guard behind the Monster’s right footpeg which gets in the way.

The Ducati is a little more upright at the rear, perhaps a bit more jacked up whereas the Triumph looks a bit sleeker and slender. Could be a draw in this round, I think.

Round 4 – Value. Which is the best pound-for-pound fighter?

The final round has got to be down to value so it looks like the Ducati is ahead on points at the moment but the Triumph has a chance to fight back here because at £11,500 it comes in at £3750 cheaper than the Ducati. PCP deals will bring this figure seemingly a lot closer in terms of monthly costs.

Almost four grand is a big difference, almost one third of the Speed Triple’s price tag, and while we set out with a simple equation of price or power, what we must include is value in terms of component quality. The Ducati packs a bit more high-end kit with better Ohlins, lightweight wheels and a more refined chassis.

The electronics feel a generation further on that the Triumph set-up too.

That said, the indicated economy brings another variable into our value round; Triumph trounces Ducati with a 46.7 v. 39.5mpg score. Both were ridden by the same two riders on the same day covering more than 100 miles.

Both bikes have some excellent equipment and they’re a hoot to ride, so its down to you really, if you’re looking for some British Beef or an Italian Stallion. Ride them back-to-back if you can and let us know if the extra quality and power of the Ducati outweighs the more attractive price of the Triumph. 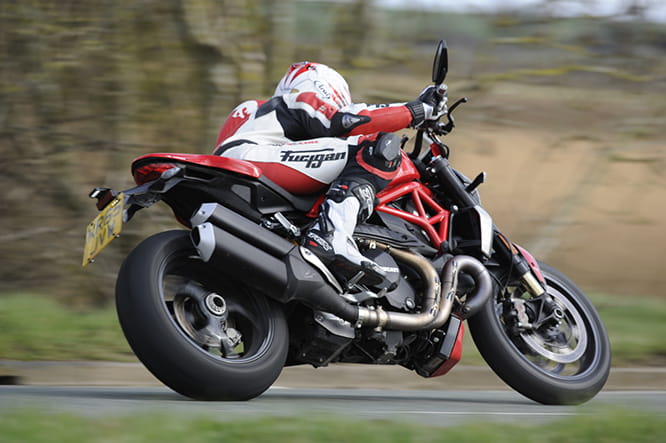 ...waiting in the wings for a shot at the title is a sprightly German in the shape of BMW’s S1000R Sport weighing in at 207kg with 160bhp and gear shift assist, heated grips and cruise etc. for £11,750. Meanwhile, putting its final touches to pre-season training is the Japanese entrant, Yamaha MT-10, promising 158bhp, a short wheelbase and seat height plus a sub-£10k price. FIGHT!

Sexy as hell to look at with a magnificent engine and beautifully-finished detailing, the Speed Triple R has put Triumph’s ageing Speed Triple right back in play with some of the best naked bikes.

The motor is so gutsy it works hard at low revs and you get that typically Triumph creamy torque curve to play with. Ultimately it’s not as powerful as the Ducati, but the motor is almost as fast in the real world, despite being 22bhp down on power. It’s better handling bike than the old bike, but ride it fast on the kind of roads this bike should be in its element and the suspension feels a bit choppy and the front-end is unstable without a steering damper. The electronics too feel like they’re a generation behind the Ducati’s system. Power out of a corner and it kicks-in ruining the fun in an old school electronics way. The Ducati lets you play more but keeps the bike in check more smoothly. The Triumph is a good bike, with a great style, a better riding position and more comfort than the Monster 1200R, but it’s not a great bike.

It’s tall is the Monster 1200R, some 20mm taller in the seat than the standard Monster 1200 for improved ground clearance and better lean angle from those beautiful Ohlins forks, shock and Ducati red trellis chassis.

It feels lively. Both because of the power of the motor and the top-end rush when the bike’s in sport mode, and because the chassis set-up is on the twitchy side. Thankfully a damper keeps the front-end under control when all that power comes in, giving the wheel a hard time at staying on the road. The touring mode on the Ducati is a strange map. I’d switch to sport every time. At full-on attack mode the Ducati’s chassis is more compliant and feels superior. The damping is more controlled, the electronics help, rather than cut in with a heavy hand like the Triumph when you want to power hard out of a corner, and it all means that in sports bike mode you can ride it faster than the Triumph. This is an R model, and they’re all about bling and being ultimate naked sports bikes. It’s more cash but for my money the Ducati may not look better than the Triumph, but it’s a better bike overall. 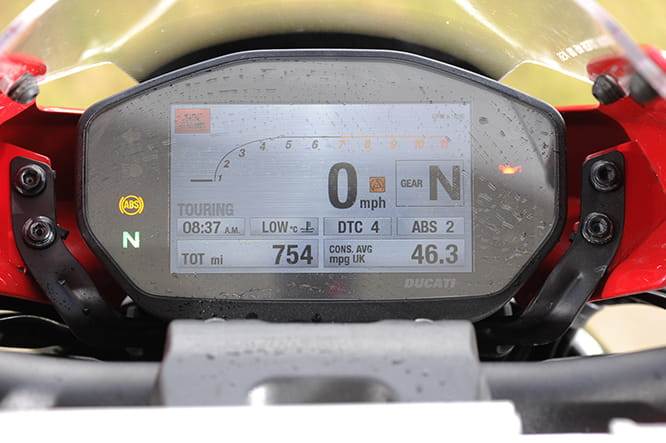 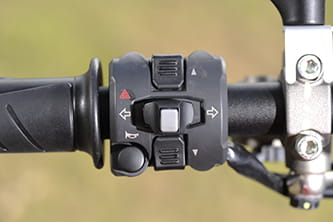 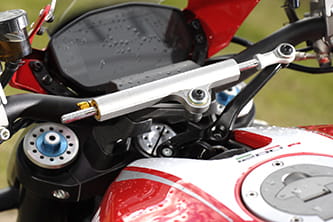 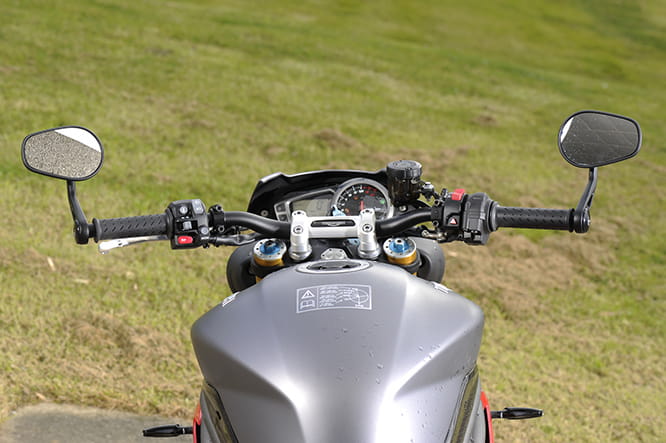 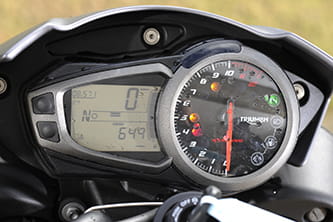 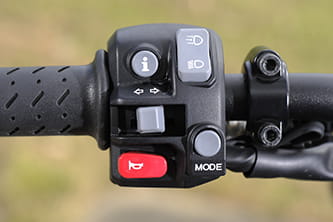