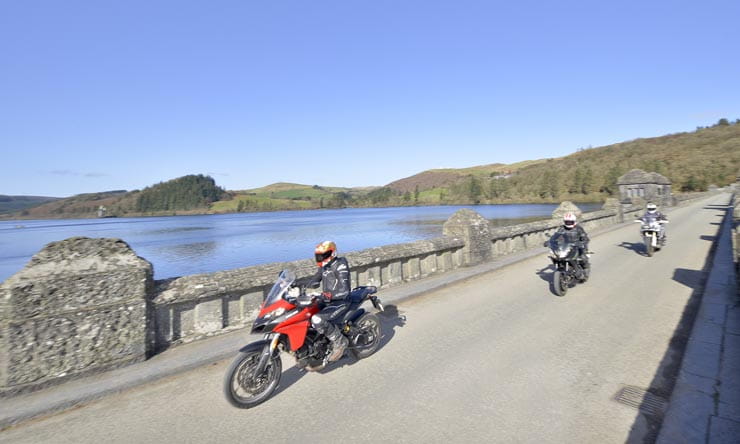 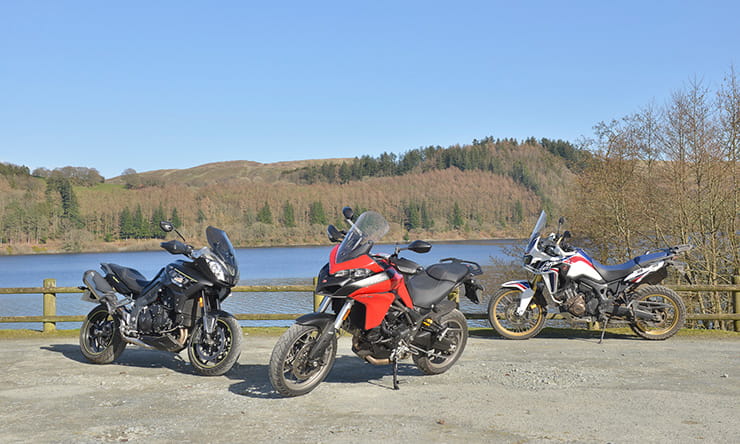 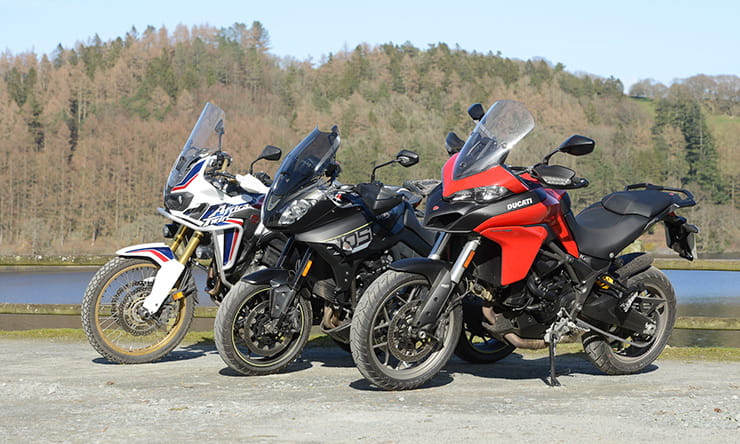 Riding in Wales is good for the soul.

Especially on a Spring day, with blue skies and temperatures that feel more like Welsh Summer. With gentle twisting lanes and a dramatic backdrop to shame some Swiss lakes, Wales is motorcycling heaven when it’s like this.

Then throw into the mix three of the latest ‘adventure’ bikes to test. We have the Honda Africa Twin, widely regarded as the benchmark for 1000cc adventure motorcycles, and in this case our long-term test bike which has done some 4000 miles in the last year, on and off-road.

Okay, so this one is the slightly more expensive DCT (Dual Clutch Transmission) model, not the standard bike, but the Africa Twin is adventure personified, built for anything, has already proved its off-road credentials with excursions in Africa, deepest Wales on the Honda Adventure Centre, and green laning in Northamptonshire.

Fundamentally we brought it along here to test the adventure credentials of the two ‘adventure sport’ bikes – the Triumph Tiger 1050 Sport, and the new Multistrada 950 over 400+ miles in two days.

The Ducati takes on where the banzai Multistrada 1200 left off. That particular 160bhp Variable Valve Timing engine is insanity in an adventure bike wrapping. The acceleration, level of gadgetry and level of technology combined with madness and comfort makes it one of my favourite bikes on the road today.

But, that motor could be too much for some, and so Ducati made use of its Hypermotard engine in a more civilised chassis with the new 113bhp Multistrada 950.

It looks every bit a proper Multistrada and mixes a combination of Multistrada 1200 and Multistrada 1200 Enduro parts like the tucked-in exhaust silencer and double-sided swingarm to create a beautifully balanced, high class Multistrada. But call it an entry-level Multi at your peril. This is every bit the real deal and comes in at a very realistic but grown-up price of £10,995. In fact, all the bikes come under £11,000. The standard Africa Twin is £10,849, or £11,689 with DCT, and the Triumph Tiger Sport costs £10,900.

In the black and fluro corner we have the Triumph Tiger Sport 1050. A bike that uses the age-old Tiger 1050 (launched in 2007) as a base but, like the Speed Triple, was upgraded last year with 104 changes to the motor, the changes include a new ECU, alternator, ride by wire throttle, cylinder head, injectors and piston design to name but a few. It also gets hand guards, ABS, a handy 12v power socket, an adjustable screen that’s adjustable in height by 55mm by pulling it out and up, traction-control, side pods to direct wind over the rider, and sport, road or rain riding modes.

Like the Multistrada 950, it makes no real pretence to be able to ride off-road and comes on 17” wheel front and rear fitted with sport touring Pirelli Angel ST tyres and sweet Showa fully-adjustable suspension front and rear. It’s a handsome looking bike and has a brutish appearance, especially in the black and fluro colours of our test bike. 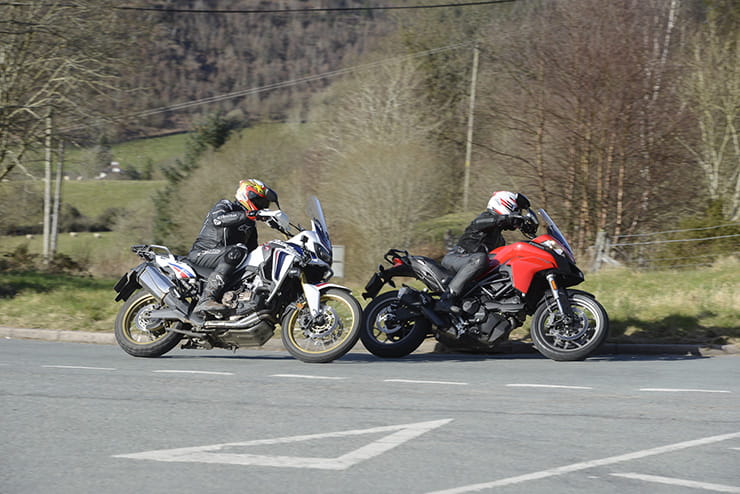 As it’s the bike I’ve ridden least, I’ll start with the Triumph as we head out of Peterborough, away from BikeSocial Headquarters, and pick up some beautiful back roads in order to miss out most of the A14. It feels taller, slightly heavy, like it carries its weigh high, but it’s nimble and the front-end feel is the best of the bunch.

Punt it into a corner and even with ABS on you can be aggressive, and the Tiger will lift its back wheel up going into a turn when hard on the brakes thanks to the power of the Nissin calipers, but it turns quicker than the rest of the bikes here and those brakes give sports bike levels of power and feel.

The tank is wide, you sit tall (but not taller than the mighty Africa Twin), and there’s the standard issue Triumph clocks, with slightly baffling buttons to adjust rider modes (all reinvented on next generation bikes like the excellent 2017 Street Triple) and big wide bars with those new handguards. They do a good job of getting rid of the cold morning air off my hands, and the wind protection is good with the screen on full height. The pegs are sports bike high compared to the Multi and Africa Twin.

It handles and you can make good progress using the chassis and that glorious three-cylinder motor to full effect. It pulls harder than the other bikes here, and makes a deep rasp when you blip it at tickover. The 1050 is a lovely engine with spot-on fuelling and connection to the throttle. It will cruise along on the motorway using its chunky midrange to adjust speed, and make use of the only cruise control system fitted to the bikes on test. It’s intuitive and easy to use.

You see a lot of the Triumph Tiger Sport’s being used by couriers and blood bikers, and there’s a reason for it. It’s fast, fun, accomplished and capable at covering big distances at speed.

Already one of the UK’s favourite adventure bikes, the Africa Twin has rapidly become a go to adventure bike. Somehow cooler than the majority brigade of BMW GS riders, Africa Twins have a large amount of credibility to them already and can cope with pretty extreme off-road riding and travelling long distances. Because of those qualities, great build quality, and a price that puts it under £11,000 in standard form, demand is growing.

My first go today on the Africa Twin is for a long motorway stint up the M6 and M54. This is the DCT version, merely brought along as it has been our faithful long-term test bike at BikeSocial for the past year, and sets the standard for the adventure part of the sandwich for the Ducati and Triumph.

With 4000 miles on the clock it still feels as tight as new, even if it’s a bit dirty through generally being the BikeSocial hack for the last few months. The DCT (Dual Clutch Transmission) version means a few minutes of getting used to the buttons before it becomes second nature. Just stick it in D for drive and off you go. The seamless gearbox changes gear with no dramas, and is smooth as you like. Want it a bit sportier? Change to one of the three sport modes to hang in to revs longer, or use the flappy paddles on the left bar to change up and down using plus or minus. It’s not for everyone, but on a long journey, or in town it gives you back some of your brain space used for changing gear. And yes, I know that sounds ridiculous, but just try it, it’s so relaxing.

The motor fires at 270 degree intervals so feels more like a V-twin than a parallel twin and though it only makes just under 100bhp, it makes its power in all the right places which makes it great on long runs. The seat looks thin but is good between refills, there’s tons of leg room and the wind protection is good as standard. Though our bike had an optional tall screen fitted which I found after 75mph created turbulence around my head.

Compared to the Ducati it sits taller and feels heavier (but bear in mind the DCT system weighs 10kg more than a standard gearbox). But the Africa Twin makes no attempt at trying to be an ‘adventure sports’ bike like the other two. The 21-inch front wheel feels ponderous at first, that tall suspension feels remote after the other two, but you soon realise it hangs in and the handling is neutral and balanced.  You can actually hang on it faster than it should let you. It’s very impressive. The Pirelli trail tyres we fitted are more suited to attacking a fire road, but you can still lean it over a long way, and use the traction-control on the way out of a corner. It may have caught me out once when being particularly hard on the gas, but we don’t talk about that as it was definitely my fault.

The system is adjustable three ways, or you can turn it off completely for off-road use. The ABS can also be disabled on the rear for off-road riding.

And that’s the point of the Africa Twin, it may not have the ultimate sport credentials like the other two bikes, but as an all-round adventure bike to tour, ride-off-road, very few come better.

My BikeSocial colleague Michael Mann nicks the Africa Twin for our second morning in Wales and makes full use of the Honda’s accessorised heated grips. ‘Number five’, he says as my hands begin to feel the icy breath of March in Wales. Yesterday was blue skies, today is back to the normal Welsh regime. Cold enough that sheep are taking cover.

But the Ducati is far from normal. I’ve heard people at shows look at the Multistrada 950 and say: “yeah, but you may as well get the big one, hadn’t you?” Wrong.

The 950 Multistrada is a fantastic motorcycle that does almost everything the 1200 does, but lacks that craziness from the motor we mentioned earlier. That’s because the 1200 makes 160bhp, the 950 is 113bhp. Fourty-seven bhp is a lot extra, but the Multistrada is designed for UK road riders, I’m sure of it. The power and torque feels stronger than it did when I rode it on the world launch a couple of months ago in Fuerteventura. In the UK it’s punchy, has a good top-end and the mid-range Sport mode is where you spend all your time. A chance to stretch its legs (under the legal speed limit you understand…) on the Evo Triangle, a 10-mile section of remote, beautifully surfaced Welsh mountain road, proves just that. The sound, the feeling from the motor and the punch would give lots of bikes a run.

Stick the screen in its highest mode and make the most of the finely-honed Ducati chassis, electronics and Brembo brakes. First off it dives a lot under braking, but the fully-adjustable suspension means you can dial it out. The rear feels firm as standard in comparison.

The seat is comfortable, it sits you in the bike much more than the other two, and the motor may make less claimed power than the Triumph but in the real world it feels faster.

Okay, so it’s never going to really ride off-road even in its mellower 75bhp ‘enduro’ riding mode. But the 19” front wheel means it would have half a chance.

Technically it is not as advanced as the £2800 more expensive Multi 1200 in terms of the VVT motor, the next level electronics package, and the semi-active suspension on the even more expensive Multistrada S. They are both superb motorcycles. But so is the 950. In 950 trim, at under £11,000, the Multistrada 950 is a seriously impressive cross-country weapon that’s just as happy to go on a tour. 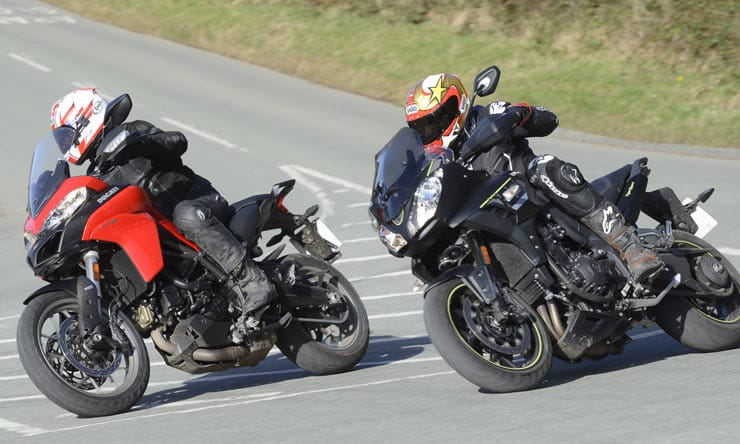 The Triumph is a great cross-country motorcycle that is just starting to feel its age in terms of electronics and chassis in this company. But it’s a great value, all-round motorcycle. The Africa Twin is one incredible motorcycle when you think just how happy it is on tour, but then will take you up a mountain. It’s beautifully finished and arguably the best-looking motorcycle here. And then there’s the Ducati Multistrada. It’s great value at under £11,000 (as are all these bikes) and in many ways, offers the best of both worlds. It may be a cop-out but we’re not going to declare a winner as each truly have their own merits.

Special thanks to the awesome motorcycle-friendly boys at Llyn Brening Visitor Centre who gave us special permission to ride along the stunning dam, and a great place to stop on the Evo Triangle and grab a brew. And to Hotel Lake Vrynwy, again, a great motorcycle friendly spot with an owner who rides a Ducati Multistrada. 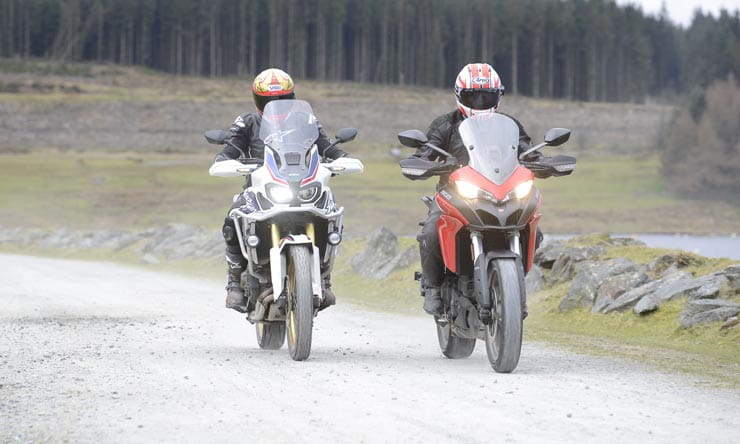 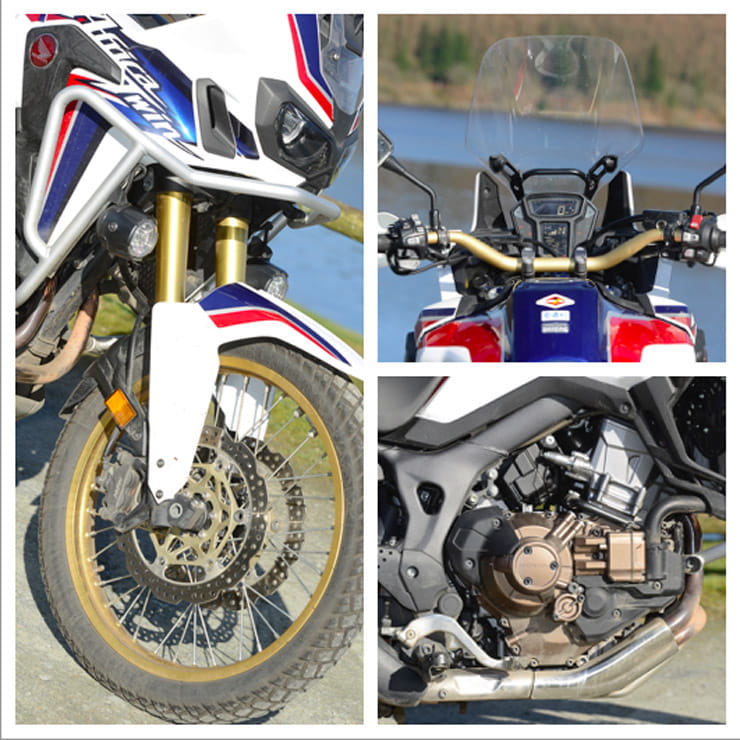 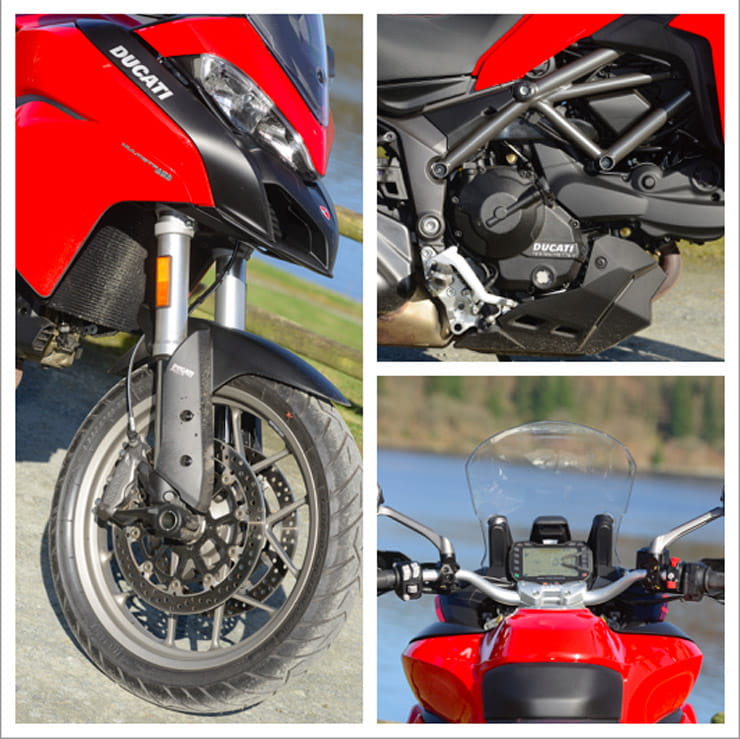 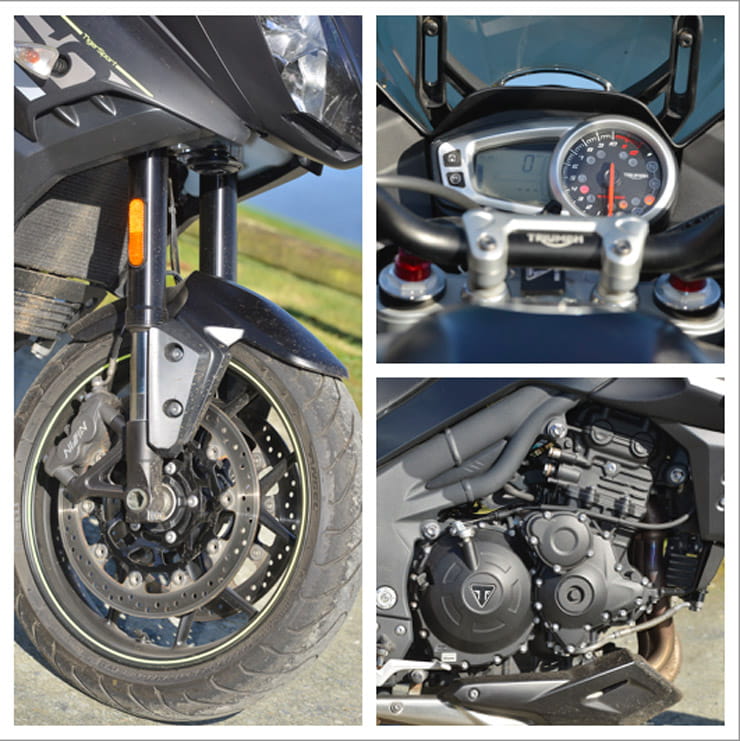