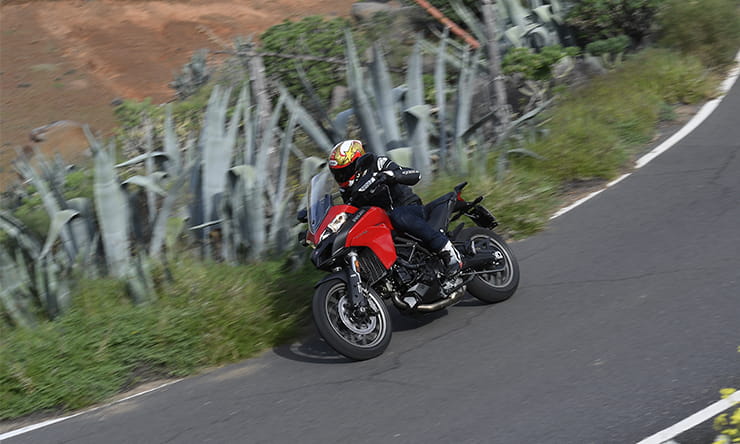 But in reality it’s way more than that. It’s a friendly, easy-going and easy to ride touring motorcycle that also has the ability to do the adventure part too, a bit, if Sir or Madam requires. Think of it as a slightly softer, slightly less manic version of the Multistrada 1200, but with no less character or real-world ability.

Ducati admit that it’s only good for casual off-road riding, but that’s no different to the standard 1200 Multi which has never really been able to cope with off-road thanks to its 17” front wheel. This one gets a 19” front and a 17” rear wheel, and they’re all new for this bike too. 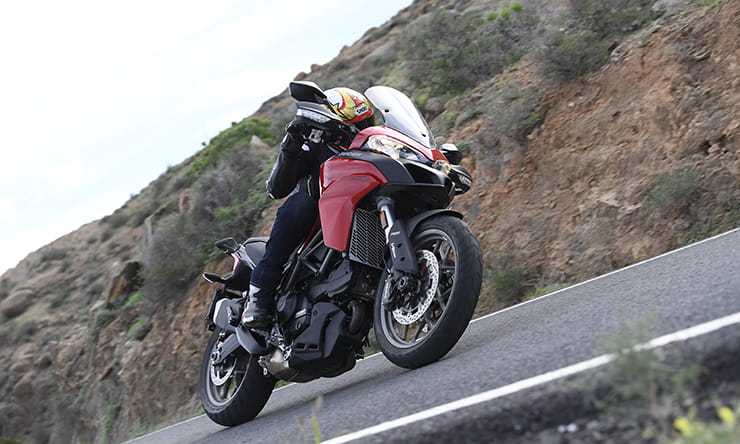 It might not be as fast as the 1200, but the Multistrada 950 is no less capable
Marc Potter, BikeSocial tester

What this bike doesn't do is scare the living bejeezus out of riders like the lunatic-let-out-of-the-asylum Multistrada 1200 sometimes can.

The 1200 and 1200 Enduros are among my favourite bikes in the world, but there’s a but coming.

The standard Multistrada 1200 and its 160bhp variable valve timing engine and incredible torque, deliver one of the most memorable experiences you’ll ever have on any motorcycle. The sheer brutal acceleration of the 1200 Multistrada as it nips along with its big wide bars flapping is off the scale barking mad when you give it full gas. I ran one last year and there’s a section of road where I swear the front wheel and the wheelie control would barely touch the road for a mile if I accelerated flat out to fourth gear from exiting the 30mph limit.

As entertaining as that is every morning, but (there’s the but) for some it’s just a bit too much. For some people the 1200 is just too powerful, and maybe too pricey, too. Starting at £13,432 for the standard Multistrada 1200, that’s a big wedge of anyone’s savings or bank loan.

The 950 offers a slightly more laid back experience than the 1200. It’s some 47bhp down for a start, but uses the torquey Hypermotard/Hyperstrada 937cc Testastretta motor, weighs in some 5kg lighter than the 1200, and features a 19” front wheel and 17” rear wheel for slightly better stability and to calm the handling.

It might not be as fast, but the Multistrada 950 is no less capable. Packs to turn it into a tourer, and urban, or a very hard looking Enduro version are available as options too, just like its more angry brother.

Parked up at Port Castillo among the multi million pound yachts in off-season Fuerteventura, the Multi 950 looks every bit the part of its bigger brother. You would never be embarrassed about parking up the smaller bike anywhere.

Only a real trained eye could spot the differences between the 1200 and the 950 when you pulled up to park next to your yacht. There’s a reason for that. The project is headed-up by the same Multistrada Project Manager as the big bikes, the very talented and very likeable Federico Valentini.

Secondly, the front-end is essentially from the Multistrada 1200 with a few detail changes. There’s that distinctive duck bill, those big (non LED) headlights, and LED rear light and that classic Multistrada stance and style. The chassis ix straight from the Multistrada 1200 too. It has the same 25.2-degree rake and 105.7mm of trail, too. But there’s a double-sided swingarm, a new direct mounted fully-adjustable rear shock, and those wheels we talked about. 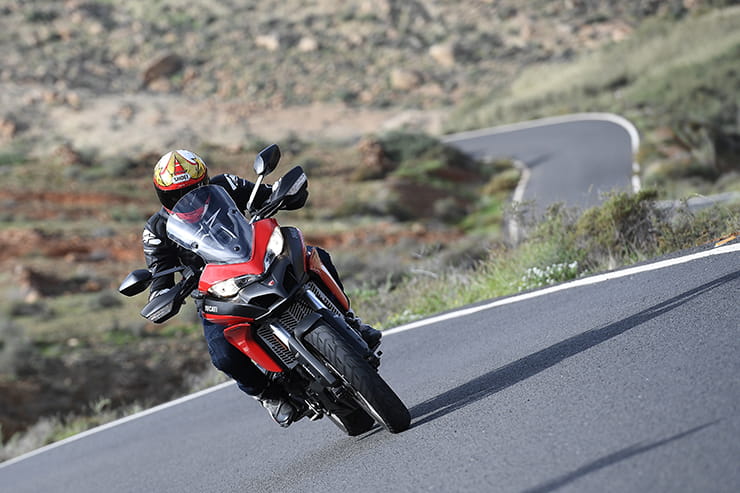 It’s a great place to spend time, and with its big seat and 1200 Enduro rear rack it’s every bit the fully-grown up Multistrada experience. The screen could do with being a little higher and wider, but then I say that on every Multistrada I’ve ever tested, and I am 6 foot 4” tall which is ridiculous in any motorcycle handbook. It will cruise easily at any speed you want and the gearing means it’s mellow at speed, but has enough guts to overtake on the motorway.

What is instantly noticeable as we head into the hills to make the most of the road surface machined from volcanic rock, and the incredible views and vistas, is how different the suspension feels to even the standard non semi-active suspension Multistrada.

As standard it’s set-up very soft. The forks are fully-adjustable, but there’s a lot of dive and weight transfer under braking as standard, especially on the initial part of the travel. The rear’s not too bad, and feels fine.

It definitely improved the dive, but I’d like to spend more time getting it right.

Once you’re used to the soft feeling from the front, the Multi 950 can be ridden smoothly and quickly. Some of the drop-offs in Fuerteventura mean you would only get a corner wrong once, but I could be confident with the 950.

It’s not as lively into or out of a corner as the standard 1200, thanks to that 19” front wheel, but it feels much more stable, yet still quick steering. It’s similar steering feeling to the Multistrada Enduro, but without the weight of that bike thanks to its 30-litre tank.

You will drag the pegs if you try very hard, and on the Touring edition bike I rode later on with panniers and a centre stand, the centre stand grounded out a few times when the rear shock bottomed out on a bumpy corner. But the pegs only go down when you’re really pushing the chassis at big lean, and there’s no dramas when they do. 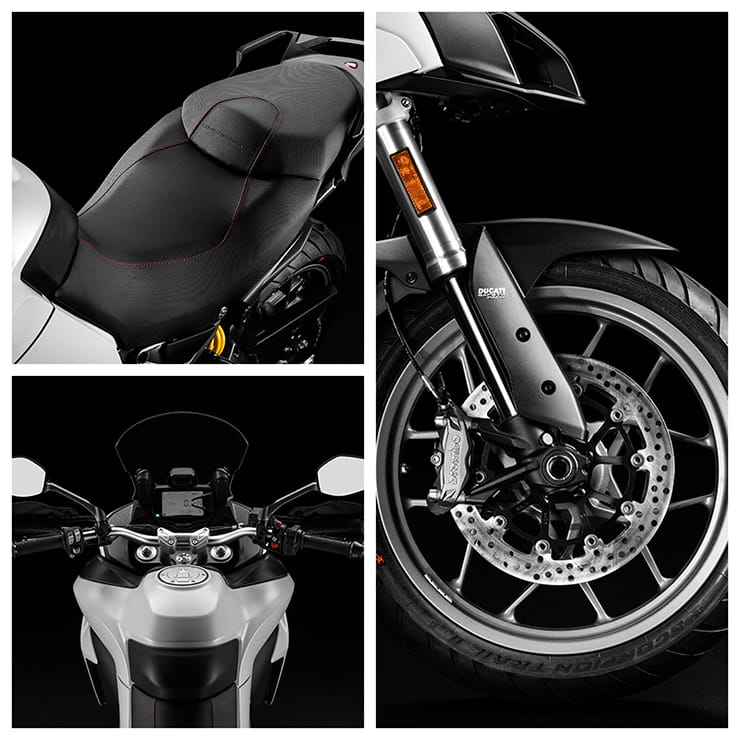 The new 113bhp motor is never going to make you shout out loud with adrenaline-fuelled hype, but it’s every bit a fully-fledged Ducati, even tugging around some 227kg wet compared to the Hypermotard donor bike which weighs in at 204kg wet it’s still plenty fast enough, most of the time. It sounds good too with lots of airbox noise.

It’s not quite so in your face as the Hyper, of course, but this is a very different concept to the stripped back Hypermotard, even though the motor is the same except for exhausts, a different airbox and a Bosch ECU.

Sure, the 937cc motor will never be as punchy and exciting as the 1200, but does just about everything that bikes does. In the real world it’s way more friendly, there’s less chain slap and chatter in town than the big engine, and the urban mode means 75bhp around town if you fancy it with a very gentle throttle map and full ABS levels engaged.

The touring mode gives a softer map but with maximum power, and Enduro gives 75bhp and allows the rear to lock up but still have ABS on the front. I tried all of them but spent all day mostly in Sport mode, with ABS turned down to one and traction-control on one too.

Not that the traction-control was ever even noticeable on the aircraft grade deck quality roads in Fuerteventura. The whole Bosch set-up is a generation behind the 1200 Multi range without the inertial measurement unit to deliver lean angle sensitive traction-control, wheelie control and cornering ABS, but the 937cc motor never troubles it.

On this bike the electronic package is fully integrated but you rarely notice it.

The ABS too is more than adequate, if not as blisteringly capable and almost unnoticeable as the cornering ABS set-up on the Multistrada 1200S. But that all comes at a cost. And what the Multistrada 950 does is make the Multistrada more accessible to real-world riders than ever whether riding solo or with a pillion.

Ultimately riders with big wallets and a horsepower fix will buy the big bike, but there is now a very serious Ducati option for those of us who can’t stretch to the price of the 1200, but want 85 per cent of what that bike does, and a bike that’s way more exciting than its rivals. 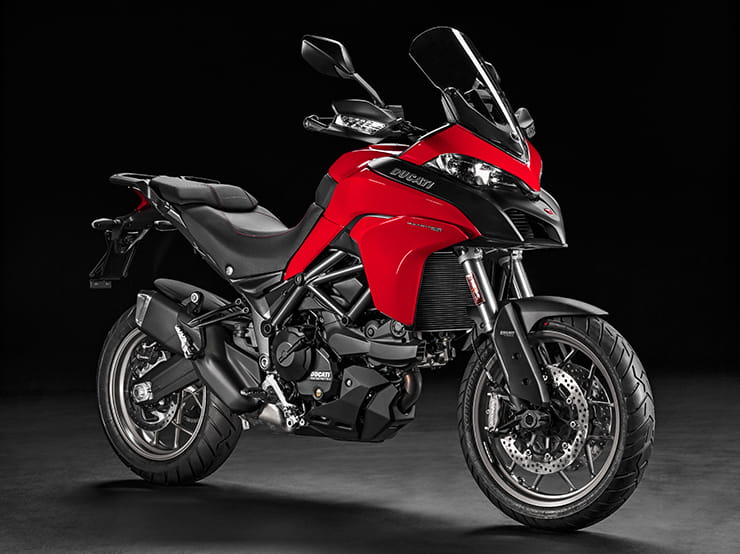 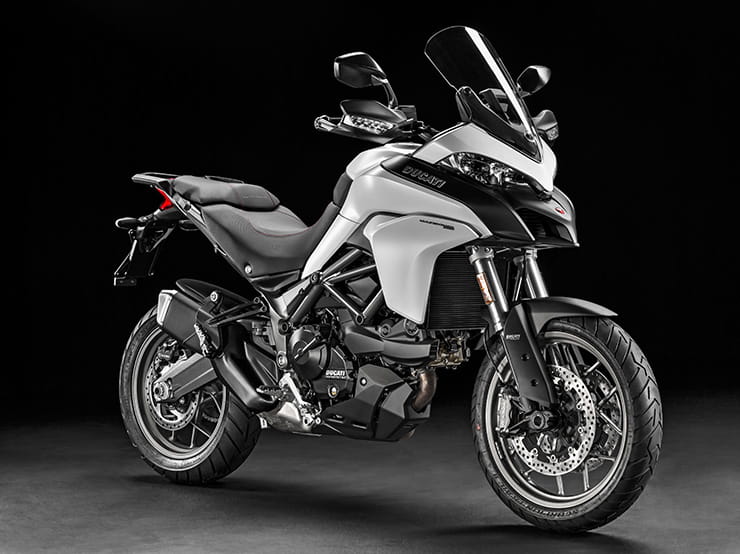 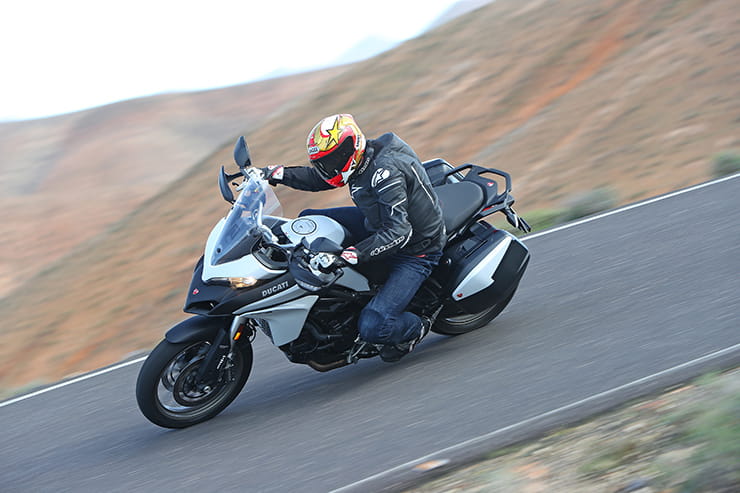