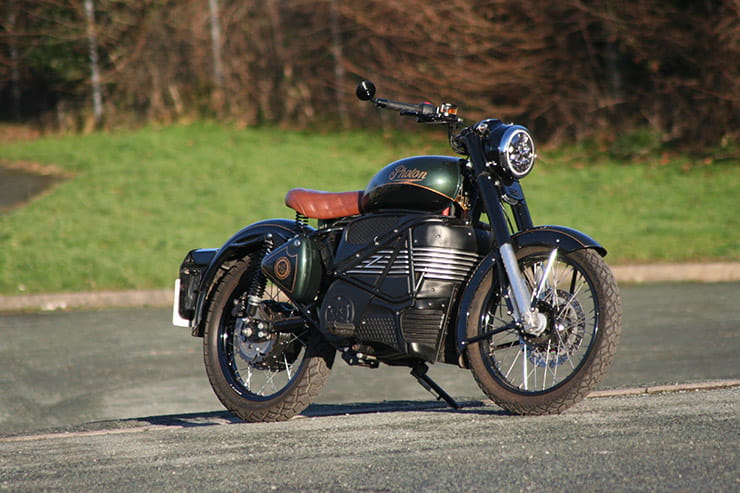 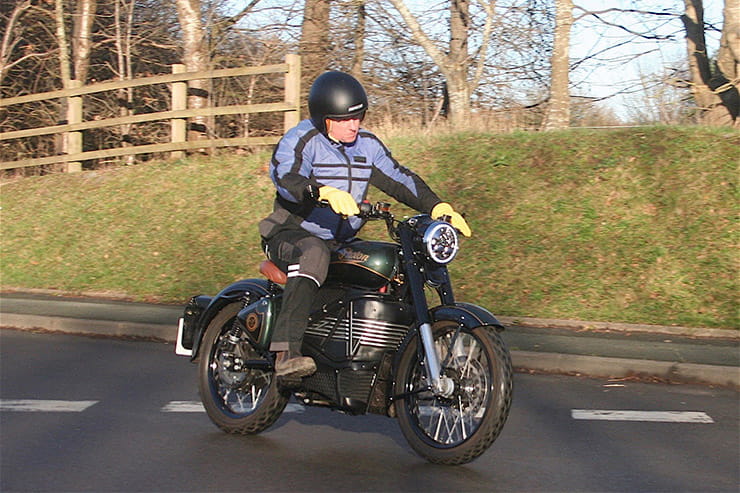 Until recently, the choice of electric motorcycles and scooters was limited to Zero, Energica and a few mopeds aimed at pizza deliveries. But 2019 saw a flurry of launches – not just new, faster scooters but several 125cc-equivalent bikes, plus Harley-Davidson's Livewire and a faster, more powerful Zero to challenge it. Meanwhile, BMW has unveiled the working prototype for an electric S1000R equivalent, while Triumph and Ducati are also working on battery bikes.

Latest to arrive is the Photon, and if you think it looks uncannily like a Royal Enfield, then you're not wrong. It's basically an RE Bullet converted to battery power by Newtown-based Electric Classic Cars. As its name suggests, the company makes a living from converting older four-wheelers to electric power, everything from Porsche 911s to Maseratis to Minis, and there's a 12-month waiting list...so join the queue.

Richard Morgan, founder of the company, isn't a biker, but his dad is. Morgan Snr still loves his motorcycling and currently rides a Yamaha Tracer, but wanted something with minimal maintenance. “The electric classic cars we do are certainly very low maintenance,” Richard told me, “so I thought, let's do a bike.” Rather than convert a real old bike he started with a brand new one. Royal Enfield of India appears to be in full support, and will actually be supplying new Bullets as rolling chassis, ready for conversion. It all sounds intriguing, but is the Photon anything more than a niche curiosity?

Prepare yourself for a shock. The standard Royal Enfield Bullet costs £4699 in Classic form. The electrified Photon will cost around £20,000 according to Richard Morgan. But then this is a small company specialising in what are effectively one-off conversions, for which £20,000 is just the starting price. As for rival electrics, the Zero S starts at just over £10,000 after the Government's Plug-In Grant while a Harley Livewire won't give you much change from £30,000. You'll need to be well heeled to afford a Photon. 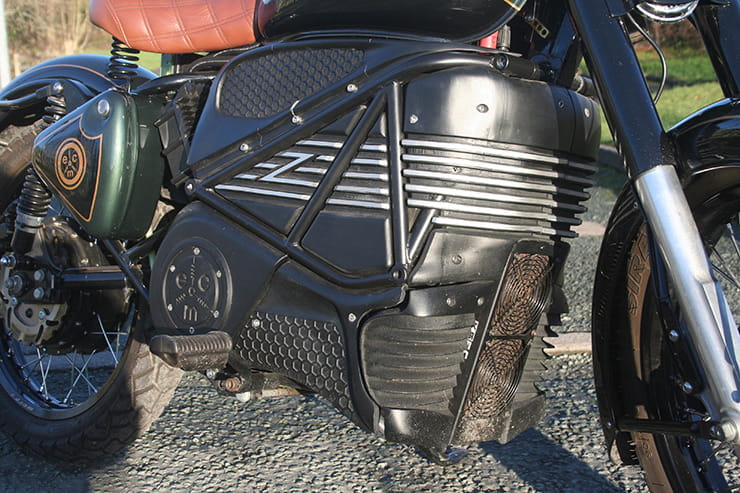 Power and torque are two very different things. On the face of it, the Photon's 10Kw electric motor sounds distinctly underwhelming, especially when you discover that 12Kw translates into 15.6bhp. However, it has a generous wodge of torque, and in the way of electric motors, delivers it from walking pace. Give it full twistgrip from a standstill and the bike moves off quite gently for the first 10mph, but then the torque starts to build it and just goes. It's much quicker than any Bullet short of a wildly tuned one, whipping from 30-40mph in about three seconds, and the same from 40-50mph.

Acceleration slows a little over 55mph thanks to aerodynamics but carries on building – the test bike was still accelerating at an indicated 70mph and it feels well within its limits at a 60-65mph cruise. In short, it's plenty quick enough for main roads and overtaking, while there are no gears to think about because you're always in the right one. Top speed is limited to seventy because although there's enough power to go faster, it wouldn't do much for the battery range.

In town, the Photon is dead easy to ride. Like all electrics, it's very smooth and controllable at low speeds, docility itself with a smooth take up of power. It's easy to glide along at walking pace, flattering the rider and giving confidence because there are no clutch or gears to think about, while the power delivery is completely linear. In fact, it would be a great choice for novices, and no doubt with a bit of tweaking the motor output could be dialled back to qualify for an A1 licence.

Normally we'd use this section to discuss the nuts and bolts of a bike's power unit and transmission. However, like most electric motorcycles, the Photon doesn't have a gearbox. In fact, the motor is built into the rear hub, so there's no final drive belt or chain either, and of course there's no exhaust. That of course means no exhaust noise either, which some of us will miss, and even by electric standards the Photon is quiet, because there's no chain noise, just a faint whine from the three-phase motor. Unusually for a hub motor, it's water-cooled, coolant supplied by a radiator with twin fans mounted on the front of the battery box. Four 2.5kwh batteries live inside that big black finned housing – they are industry standard lithium-ions, made by LG Chem and as used in the classic car conversions. 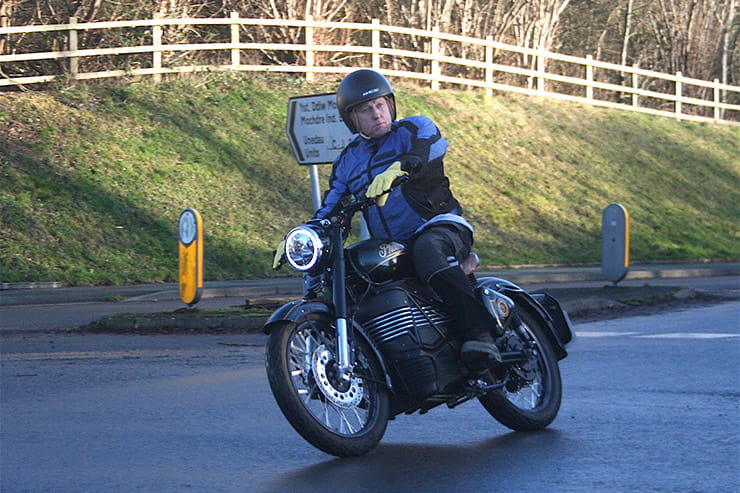 Despite battery progress, range is still the £64,000 question for any electric vehicle, but on a short winter's day I didn't have time to test it properly. The Photon has a 10kwh battery and the closest equivalent Zero S with a bigger 14.4kwh claims 120 miles of mixed stop-start and 70mph cruising. The bikes are about the same size and weight, so all other things being equal, that would translate as over 80 miles for the Photon. The company test rider told me he had ridden the bike to Aberystwyth and back at 50-60mph, which is about 80 miles... so, quid pro quo? I'd like to do that ride myself to confirm, but if so the Photon does have a realistic 80-mile range.

Charging... the Photon has a 7kw charger and Type 1 connector, which means it can charge from many of the public charge points – a full recharge takes about 90 minutes, according to the maker, and of course you can give it a quick top-up whenever.

If you've ridden a standard Bullet, you'll be amazed at just how similar the Photon is – that is, if you take out the obvious difference. The frame, suspension, geometry and weight are hardly changed from standard, so the Photon handles very much like the original. The paper spec of unadjustable front forks and old-fashioned twin rear shocks might look unpromising, but they cope with the performance well and like a Bullet the Photon isn't quick steering but feels very secure on bumpy corners while the Michelin Sirag tyres cling on well. They do reckon that the subframe bolted in to hold the batteries makes the standard main frame stiffer, which may well be true, and the bike was unwavering at its top speed. 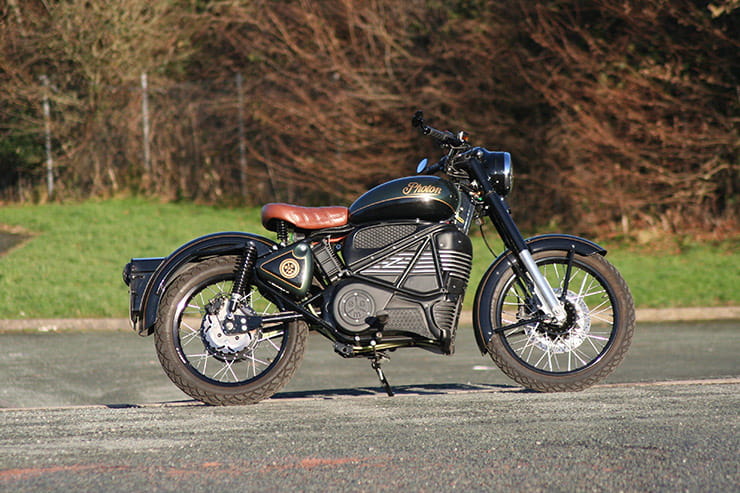 The standard Bullet stoppers of a 280mm disc front and 240mm item rear do the job, though the front felt a bit wooden on the test bike (which to be fair had covered 5000 miles), and for £20,000 I'd like to see uprated brakes as part of the package. But there is a third brake, of a sort – on the overrun, regenerative braking turns the motor into a generator, putting a small amount of power back into the battery. It also adds a bit of 'engine braking' (if that's the right phrase in this context) which is reassuring thing for four-stroke petrol heads.

Bullets are surprising comfortable bikes over distance, and I reckon the Photon would be no different. It has a nice neutral riding position and the solo saddle is very comfy. You're a bit in the wind over 50mph, but there a big choice of accessory screens on the market. The only limit on touring would be the range, but a different sort of touring – 150 miles a day with a couple of recharge stops – would be feasible.

There's not much in the way of rider aids, though the latest Bullets do of course have ABS. Instrumentation is limited to the standard Bullet speedo with an added battery level indicator. On production bikes the ammeter will show how much power is being used, and how much put back into the battery with regen. There are all sorts of aftermarket screen and luggage accessories for the Bullet which will fit the Photon, and they're also planning a long-range version, with two extra batteries in leather panniers. An electrified Continental GT is likely as well. 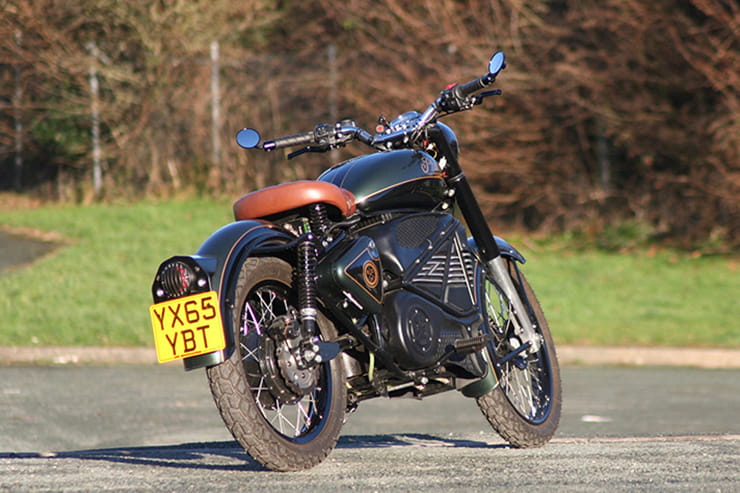 If you want an electric motorcycle for commuting (and for that they make a lot of sense) buy a Zero, because with a smaller 7.2kwh battery it's half the price of the Photon. But if you can afford a Photon, go for it. As well all the logical reasons to go electric – lower emissions, very low maintenance and easy riding – it's stylish, well executed and has the range and performance for pleasant day rides.

Three things I loved about the 2020 Photon…