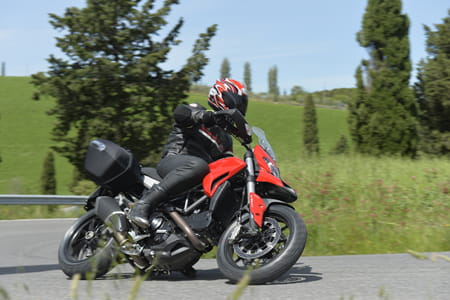 A touring version of the Hypermotard? Some would say that’s impossible; that Ducati’s supermoto styled bad boy could never be converted into the sort of sensible, practical all-rounder required for touring. But that’s what the new Hyperstrada has been created to be — and after a day spent riding it on stunning roads in Tuscany, the concept makes plenty of sense.

Inevitably the two models feel similar in many ways. The Hyperstrada’s 20mm higher handlebars mean its riding position is slightly more upright; the seat is thicker and broader for both rider and pillion. There’s still a slight feeling that you’re almost sitting on the petrol tank, but there’s enough room for a comfortable ride — provided your pillion’s not too big, at least.

The new 821cc liquid-cooled, eight-valve desmo V-twin that Ducati created for this year’s Hyper models was designed to give a broad spread of power, making it excellent for touring use. Its Sport and Touring modes give the full 110bhp output with varying response; Urban cuts the max to 75bhp and softens it further. The light ride-by-wire throttle gave instant pick-up and useable grunt from as low as 4000rpm.

Even in Touring mode the Hyperstrada was quick and responsive. On the few straight roads its screen wasn’t as useful as the Multistrada’s bigger, adjustable equivalent. But it diverted enough breeze from my chest to earn its keep, as the ’Strada stormed towards its 130mph-plus top speed with an addictive V-twin snarl.

On Tuscany’s twisty roads the Ducati was fantastic fun, thanks to its blend of light weight and chuckability. The steel tube frame is almost identical to the Hypermotard’s, but the newcomer’s Kayaba forks give 20mm less travel. Both ends were reasonably soft, so the rear was improved by some turns of its remote preload adjuster.

The lower front end meant the bike handled better than the Hypermotard, steering with a light and neutral feel that made it fun for flicking through the turns. Ride quality was good; stopping power from ABS-equipped Brembo Monoblocs immense. Pirelli’s dual-purpose Scorpion Sport tyres gripped well too.

The Hyperstrada looks like being one of Ducati’s most practical bikes. Its 16-litre tank and 50mpg-plus economy should give a range of over 150 miles. Then there are those panniers, which are made from a blend of ABS and nylon, have 25 litre capacity and close via zips. They’re not secure or all that big but they’ll still be mighty useful.

Having begun the day wondering whether Ducati were pushing their luck by giving this tweaked and accessorised Hypermotard a new name, I ended it captivated by one of the most enjoyable and impressive bikes of the year. The Hyperstrada isn’t cheap at £10,650, and it won’t match the comfort of a full blown tourer, especially if you’re two-up. But it’s an improbably versatile machine with heaps of performance and a character all its own.

- Points — Not the roomiest of tourers, or the cheapest