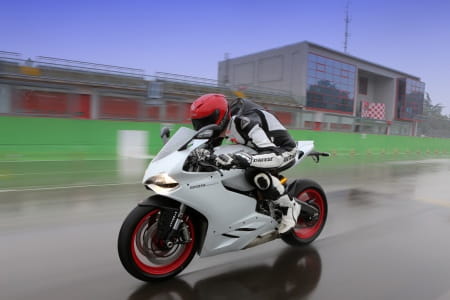 Descriptions of size tend to be relative in the bike world, just as they are everywhere else. So the 899 Panigale finds itself described as a “supermid” even by Ducati, with the suggestion that it’s some sort of middleweight.

But just as even a “small” baby giraffe is pretty damn tall, so this replacement for the 848 EVO is a seriously big and grown-up superbike – even if it is inevitably less of an ultra-powerful beast than the 1199 Panigale from which it’s developed. With an 898cc V-twin engine that kicks out a claimed 148bhp, the 899 is certainly not for novices even if Ducati say they’re hoping to attract broad range of riders, including some new to sports bikes.

In fact the 899 does have a slightly softer character than the distinctly hardcore 1199 that began the Panigale line. That bike was very much aimed at the track, but Ducati say this smaller model is designed to give a equal split between road and circuit use, so is a more rounded machine with more emphasis on ridability and comfort.

That eight-valve desmo motor has slightly less short-stroke dimensions than the bigger Panigale lump but it’s still a seriously high-tech device that makes maximum power at 10,750rpm and produces more torque than the smaller 848 unit right through the rev range. Some covers are aluminium rather than the 1199’s lighter, more expensive magnesium but the 899 gets a sophisticated engine management system with three riding modes. 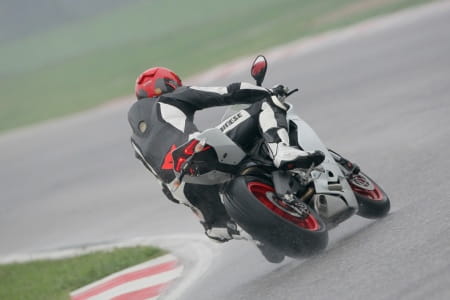 Its chassis is also closely based on the 1199’s aluminium monocoque frame, with the engine rotated backwards slightly to fine-tune weight distribution. The smaller model saves some cost with a simpler rear subframe made from steel instead of aluminum, and has a twin-sided swing-arm that helps give a slightly shorter wheelbase.

Suspension is by Showa’s Big Piston Forks — used for the first time on a Ducati — and a multi-adjustable Sachs monoshock, on the left side as with the 1199. And there’s no scrimping on the brake specification of Brembo Monobloc calipers with three-way adjustable ABS as standard, nor on the tyre choice of Pirelli’s Diablo Rosso Corsas, which Pirelli say have a similar 50:50 road:track bias to the bike.

All of which would have been ideal except that the launch weather had other ideas, so we headed out onto a damp Imola circuit on Panigales shod with racing wets. Although it was a shame not to be able to push the bike or rubber towards their dry-weather limits, the tricky circuit with its undulations and several blind, damp bends was a good test of all-year-round road riding.

The Panigale did enough to suggest that Ducati have found an excellent balance between performance and usability. We began in Wet mode, which cuts maximum power to 110bhp and gave a very smooth and easily controlled throttle response, helped by traction control that is fairly intrusive by default but can be varied by toggling through the display on the new instrument panel (which is slightly less flashy than the 1199’s).

The two full-power modes give differing throttle response and a smooth, strong hit of power that sent the 899 bellowing through the spray towards a top speed of around 170mph, backed up by a very efficient quick-shifter that is standard fitment. Those wet tyres gripped impressively hard given the conditions, and I was also impressed by the 899’s suspension, and its ABS-enhanced braking ability even in the wet. Both ends are roughly ten per cent softer than the 1199’s and gave well controlled ride that should work equally well in the dry, though it’s impossible to be sure. 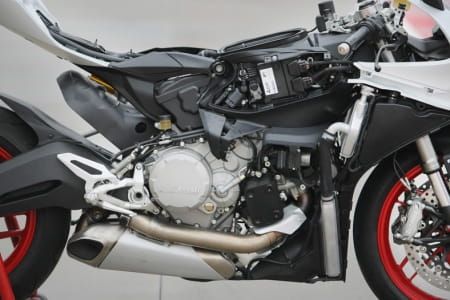 Having a thicker seat and slightly less extreme riding position than the 848 EVO’s should also help make the 899 more comfortable than the old model, as well as faster and easier to ride. (It could use some less slippery footrests, though.) The new bike shares its 17-litre fuel capacity with the 1199 Panigale too, so holds a useful 1.5 litres more than its predecessor.

In the afternoon the light rain turned into a downpour that sent rivers across the track and caused the launch to be halted early. But not before the 899 Panigale had done enough to suggest that it’s not just a slightly less powerful and glamorous version of the 1199, but a seriously fast and capable superbike that would actually be better suited to many riders, especially those who stick mainly to the road.

With the style (in red or white) and most of the performance and glamour of the flagship models, the 899 Panigale certainly looks like a tempting compromise. Its £12,495 price is higher than the 848 EVO’s but this is very possibly the best, most complete sports bike that Ducati has yet produced.