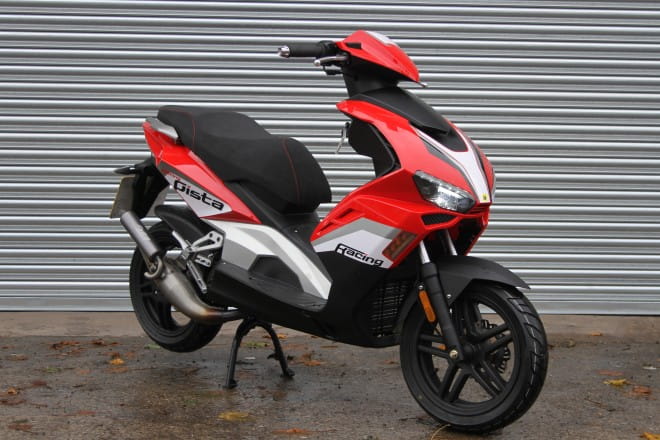 Consumers are spoilt for choice when it comes to new scooters, especially at the cheaper end of the market. Less than a grand for a Chinese built fifty is hardly out of the ordinary but to get a liquid cooled 50cc scooter with a decent spec and potential for some extra power for just £999 makes the Beeline Pista worth looking at...

The company behind the brand are Austrian and that European flair can be seen in the design and spec of the unfortunately named Pista LC. Costs could have been cut but thankfully they weren’t, so rather than just another cheap and cheerful moped you get a good looking machine with multi function digital dash, a liquid-cooled engine, LED lighting (including the headlights themselves) and wavy discs, both front and rear. Available in two colour choices, white/blue and red/black the Pista certainly looks the part and stands out with its tasteful graphics, flowing bodywork and subtle detailing.  You certainly can’t grumble for less than the price of a half decent mountain bike! Beeline are distributed exclusively in the UK by IMP UK Ltd and dealers are currently being appointed for this new brand. 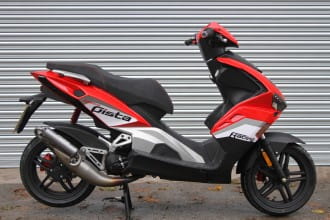 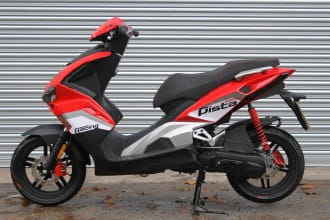 A two-stroke engine always sounds better than it’s equivalent four stroke and this liquid-cooled machine sounds raspy enough through the standard sports silencer. Like any restricted fifty though it’s not exactly quick off the mark and when it gets to the enforced 28mph limit (yes that speed reduction was sneaked in to the moped laws a while back) it’s like hitting a brick wall. As well as riding scooters for a living, I’m also a keen cyclist and can out pedal a restricted moped, yet don’t have to wear a helmet if I don’t want to! Riding a 28mph scooter on the road feels at best frightening and at worst dangerous. Why the powers that be can’t just let a moped be left as the factory intended allowing it to hit 40-45mph is beyond me. Other than the top speed though the Pista handles well enough, even in the wet on the budget tyres. From a riding point of view it feels quite sporty and is very similar to an Aprilia SR50. 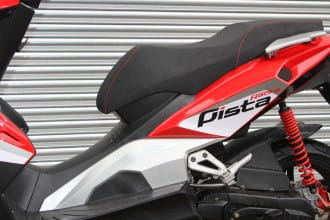 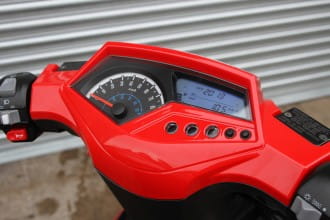 The need for speed

PSN Scooters in Batley West Yorkshire have been around for years, they’re well known for building some very quick autos, both for the road and track. 35-40bhp Italjet Dragster/Gilera Runner engines aren’t uncommon and they’ve dominated the 80cc auto and specials classes in recent years. Unsurprisingly as one of the first Beeline dealers they’ve also developed a tuning kit for the Pista. It comprises of a cylinder, piston and head, plus an uprated variator and exhaust. Riding back to back with a derestricted 45mph Pista and this kitted machine was like chalk and cheese. The kitted machine sounds like a jar of angry wasps, or more accurately like one of PSN’s race scooters. It revs cleanly, very quickly and is much more entertaining on the road. The top speed is 56mph, (double the standard machine) but could be increased using a gear up kit, even without one it makes the scooter much more useable and is great fun to ride. I wouldn’t usually encourage anybody over the age of 16 to ride a moped but when it sounds and rides like this one it can actually be much more fun than a bog standard 125, tuning is also a way of extending the ownership of a fifty. Get to 17 and either derestrict it or fit a kit rather than trading up to a 125. To get a Pista to this spec will cost just less than £500, which is cheaper than selling it and buying another scooter.