Four out of four as Rea doubles up in Thailand 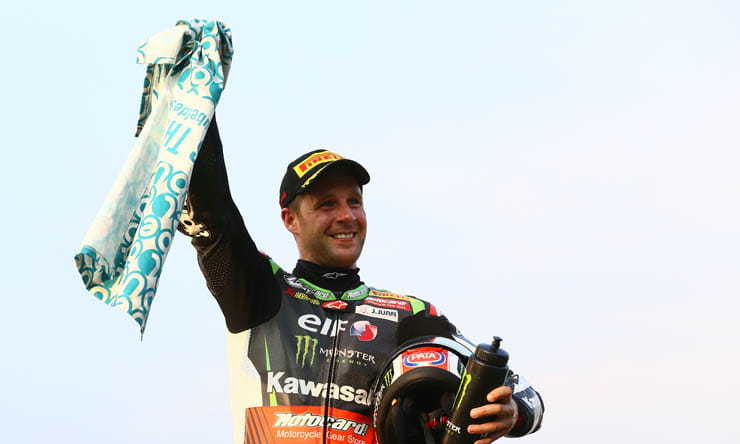 Jonathan Rea maintained his 100% start to the 2017 Superbike World Championship with a double win at Buriram in Thailand this weekend.

The 30-year-old Ulsterman took dominant wins in both races, while main title rival Chaz Davies suffered a setback on Sunday to see the gap at the top of the standings open up to 30 points after two rounds and four races.

Rea’s dominance started in Saturday’s Superpole session, where he became the only rider to dip below a 1:33 lap around the 2.8 mile Chang International Circuit, claiming pole position for the afternoon’s 20 lap race.

The Kawasaki rider, who topped every session over the weekend, streaked away to a lights to flag win, finishing the 20 laps 6.279 seconds ahead of the Ducati of Davies.

Welshman Chaz, who finished second to Rea in both races at the opening round, didn’t get the best of starts from row two and found himself behind Tom Sykes on the second Kawasaki in fourth, while Rea and Marco Melandri pulled away. Davies eventually got past on lap four and by the time he had overhauled his team-mate Melandri 10 laps later, double world champion Rea was untouchable up front. Sykes stole third from Melandri at the very last corner, making it three Brits on the podium, while Alex Lowes had another solid ride on the PATA Yamaha, in sixth, with Leon Camier eighth on the MV Agusta. 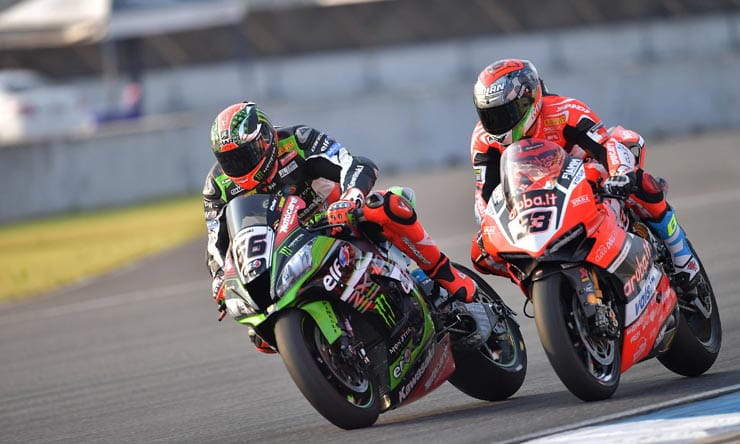 The results saw Melandri start Sunday’s race on pole under the new reverse grid regulations, with Sykes, Davies and Rea on row three. The Italian made good on his front row start to take the holeshot, although both Rea and Davies were on the back of him by the end of the opening lap. Disaster struck Davies on lap three, though, as he looked to pass his team-mate for the lead at turn three. The Brit braked too hard, running wide and falling as the back end of his 1199 Panigale slid away from underneath him.

While Chaz remounted at the back of the pack, some 30 seconds down, Lorenzo Savadori’s Aprilia blew up, throwing him down the road and spreading oil on the track. With the race stopped, the result would be decided over 16 laps, with the grid decided on the positions at the end of lap four, meaning that Rea would again be on pole, with Davies starting back in 19th place.

Rea once again produced another metronomic performance to lead from start to finish, pulling out a comfortable lead over Melandri who held second for almost the entire duration of the race, only to be passed by Sykes once again on the last lap. Lowes took a lonely fourth on the improving R1, while Davies salvaged 10 points from the race in sixth. The Ducati rider had moved quickly through the pack but suffered a problem with his throttle’s calibration, a result of the part being changed following the earlier crash. “Finishing sixth is a salvage after the crash, but we could have been close to the podium at the restart,” he said afterwards.

“I was following Marco but I misjudged his speed a little bit so I went to the outside. For me the rear always locks there, but that time it did it more than usual, perhaps because I was on a dirty part of the track, and couldn’t recover the grip. Unfortunately, we had some issues with the throttle after some parts were changed for safety. Still, we have many more points than after two rounds last year, and now we’ll go to more favourable tracks. The championship is long.”

Speaking after his double win, Rea commented: “This is the best start to a season ever in my career. It is important to maximise these points when we can because it is how I built my championships in the past. When we can win, make sure we win, and then we can try and consolidate. These four victories are nearly halfway to my win tally from last year already! It is a good start and I just feel comfortable on the bike. We took the bike set-up we had from Phillip Island to here and it just pretty much worked. That is unheard of, so I have a good bond with the bike. There are still some areas we need to improve for the coming races but Kawasaki are working hard on this. We expect to improve the bike again in the next races.”

Race two brought disappointment for Camier, whose bike expired in a cloud of smoke while running seventh. Eugene Laverty had a tough weekend on the Milwaukee Aprilia though, scoring just a solitary point in Thailand. The Irishman had dropped out of seventh in race one with a technical problem on the final lap, while he had been running fifth on Sunday before crashing and remounting to take 15th at the chequered flag.

The Superbike World Championship returns to Europe for its next races, taking place at the Spanish Aragon circuit on the weekend of 1-2 April.

Championship standings (after two of 13 rounds)