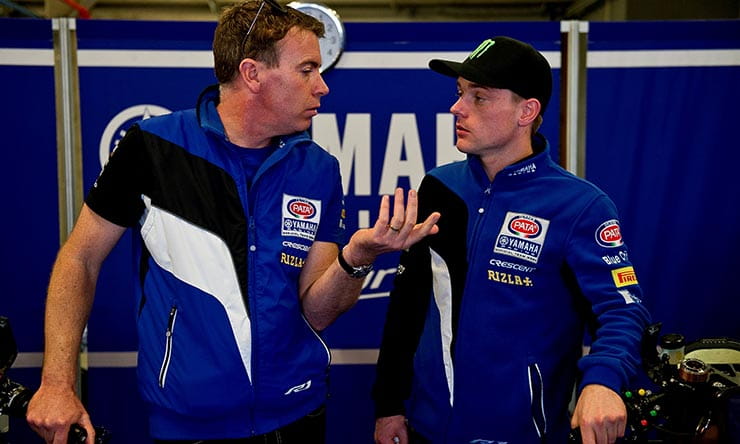 PATA Yamaha team boss Paul Denning has admitted that he underestimated the level of the competition in world superbikes last year but told BikeSocial that his Crescent Racing outfit is committed to taking the challenge to the dominant Ducati and Kawasaki squads, and that they have made a number of improvements to both the bike and team structure for 2017.

Yamaha returned to the series with a fanfare last year but scored just a solitary podium in a dismal campaign that saw former world champion Sylvain Guintoli take a third place in the season closing Qatar round. The Frenchman ended the year as the top R1 rider, albeit a lowly 11th in the championship.

Speaking to BikeSocial, Denning (pictured above with rider Alex Lowes), whose Bournemouth-based Crescent Racing team runs the squad on behalf of Yamaha Motor Europe said: “Maybe there was a sense of too much expectation in terms of what could be achieved, where the reality was that the project was new for the group of people in Yamaha.

“The bike was new for us and the way of working was very different in as much as previously (with Suzuki) we had been responsible for developing the bike ourselves. How things progressed took some time to get a handle on and there was, within the whole group of the project, by no means a lack of respect shown to the competition but an assumption we could jump straight to that level when, actually, you look at what Ducati and Kawasaki have been doing consistently for the last four years. They have had the same engineers, in some cases the same riders, continued and increased investment and technical know how. You can’t expect to jump in and compete at that level, irrespective of how good the base machine is. In the end, the result was not as good as we had hoped, based on a number of issues and rider injuries. We got to a reasonable level by the end of the season but, yeah, we expected more - although maybe that expectation was not realistic.”

Part of that expectation came from the results shown by the YZF-R1M elsewhere in 2015, with MotoGP powerhouses Pol Espargaro and Bradley Smith winning the prestigious Suzuka 8-hour event and Josh Brookes dominating the latter part of the British superbike (BSB) championship to take the title on an R1. In both cases it could be considered that the class of the rider made the difference, and Denning concedes that the gulf in pace between world superbikes and the domestic series is almost too vast to be relevant.

The former Suzuki MotoGP team manager added: “We ran a successful and hardworking team in BSB for many years but the reality is that there isn’t a full factory Kawasaki team there, and there isn’t a full factory Ducati team there. The level is completely different. You can only really compete with what you are up against and if you look at the lap times at Donington Park, the rhythm is two seconds a lap faster (in the world championships) and that means that you have a completely different characteristic from the bike. The base character from the R1 is very good but it’s not easy to transfer that to the track. In fairness, even in 2015 in BSB, it took half a season for Josh to win races and his team mate never got on the podium, so while the team did a great job it wasn’t just about the ability of the motorcycle.”

It’s not only a case of bolting on performance. It's also about putting the structure behind it.

For 2017, the squad have surprisingly dispensed of the services of Guintoli, bringing in Dutch rider Michael van der Mark to partner Alex Lowes. There have been a raft of small updates to the bike for the season ahead, with Yamaha also bolstering the technical expertise within the squad.

“We’re focussing mainly on acceleration,” said Denning. “That doesn’t necessarily mean purely horsepower, rather putting that power to the ground. We’ve made lots of small technical details, supported by how the team works in the garage and having the resource to analyse properly in the garage and make the right decisions for the bike, to ensure that we keep improving the bike throughout the weekend and not just getting to FP3 and stagnating.

“It’s not only a case of bolting on performance but about also putting the structure behind it. There is an increased technical structure within the Yamaha world superbike group itself with Michele Gadda (pictured, with Lowes) coming over from Ducati. That is a really important acquisition for us and a couple of additional personnel both on the team side and the Yamaha side is strengthening the squad immeasurably. If you have a reasonably small company you only have to make one or two very important additions and it can really go up.”

Technical rule changes for 2017 mean that some of the of the sophisticated strategies deployed by the other four-cylinder runners have been outlawed. These mean that bikes now need to be fitted with working generators to charge the battery and that bikes which come fitted with single piece throttle bodies from the factory must use these in racing. Previously BMW, Honda, MV Agusta and Kawasaki had run systems which effectively split the throttle bodies, causing the engines to run on just two cylinders mid corner and improve traction on exit. Denning says that these changes can only help Yamaha get closer to its rivals.

He continued: “The new regulations don’t affect Yamaha very much. We already used a generator and with the crossplane engine, we have an uneven firing order engine so it was never an intention to separate the throttle butterflies. For us, there are no negative points with the new regulations. Kawasaki already started testing with the new stuff last summer and already the lap time is spectacular, so I don’t think they are suffering too much.”

Yamaha is unique among manufacturers in using the production based series as a spring board to MotoGP, with Cal Crutchlow and Yamaha's sole world superbike champion, Ben Spies (pictured) both moving from the factory superbike squad to the satellite Tech3 Yamaha MotoGP team in previous years.

Having won at Suzuka last year, Lowes was rewarded with a Tech3 ride as a replacement for the injured Bradley Smith at three rounds and Denning believes that the 26-year-old can still make a permanent move to the premier class in the future.

He added: “Part of Yamaha’s philosophy is that they want to show young riders that there’s a path to the top. We have two young riders and if they can develop in the right way in the next year or two then perhaps they will have future opportunities with Yamaha, which hopefully also shows young riders that a Yamaha superbike is a good place to be.

“Moto2 is the acknowledged route (into MotoGP) and has been very successful but, as Ben Spies and Cal Crutchlow have shown in the past, it is another route. Yamaha, quite rightly, want to consider that because Moto2 is 600cc and a very simple bike, while a world superbike is at a very high level of technology, more similar to the M1, and if the rider is special enough then there is a route from here to MotoGP.” 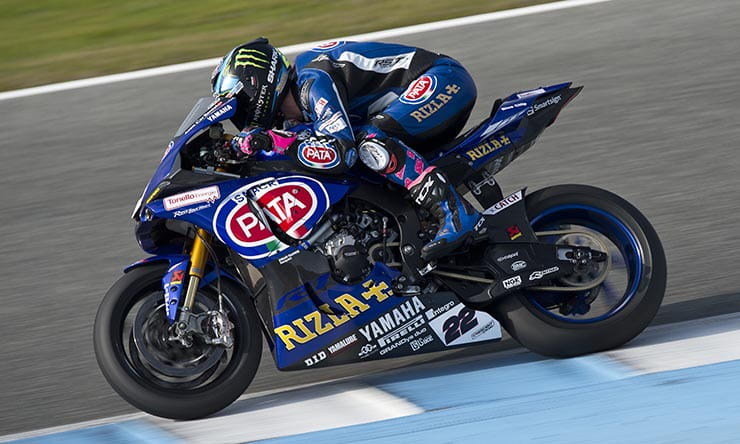 Lowes: ‘I need to earn my shot at MotoGP’

Although he ended his third full world superbike season in a disappointing 12th place, Alex Lowes believes that he and the Yamaha are capable of winning the title within the next two years.

The Brit suffered a number of crashes as he pushed the developing bike beyond the limit, missing the Donington Park round with a broken collarbone and riding through the pain barrier for much of the season. Despite this he was able to show his speed by winning the Suzuka 8-hour with Pol Espargaro and Yamaha tester Katsuaki Nakasuga and scoring his first MotoGP points as a stand-in at the Tech3 Yamaha squad (pictured), and he believes that he’s in a much better place to make an impression in his day job this year.

He said: “I was injured a lot last year and we had some small issues with the bike, but for this year I’m in a good place. The team has done a fantastic job over the winter and I’m fit and healthy. We’ve had two good tests on the bike and I’m ready to go.”

Lowes is under no illusions about the task in hand, but believes that a number of small improvements to the team, the bike and his own riding will help take him closer to the podium. He added: “It has to be a combination of both me and the bike because if I try just to close the gap by myself then what happened last year, when we made too many mistakes, will happen again. There are lots of small things that are a good step better than last year and I am really curious to get to the first race and see where we are, because I think that we will be a lot closer. We’re still behind the Ducati and Kawasaki but nowhere near as far behind as we were last year, so we will see where we stack up when we get to Australia.”

And while Alex is keen to return to MotoGP, where his twin brother Sam races an Aprilia, he knows that there is still work to be done on the superbike project, adding: “I fully understand that I need to earn my shot. Yamaha are good to me and I need to prove to them my potential. It’s down to me now. They’ve given me this opportunity and I want to repay them with some wins and better results. My goal is to win the world championship with Yamaha and whether I can do that this year or next year, I really believe that we can.”

Official tests for the 2017 Superbike World Championship takes place at Australia's Phillip Island circuit next Monday and Tuesday (20-21 February) with the opening round taking place at the same venue from 24-26 February.